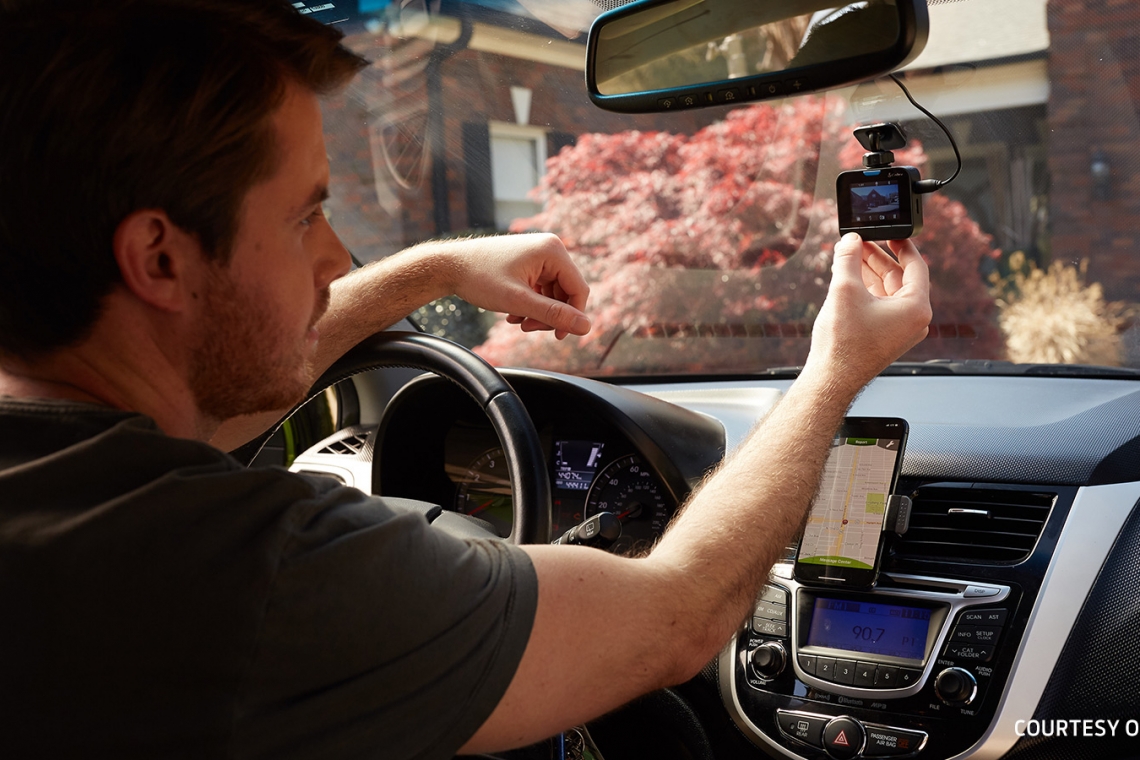 When a trusted name entrenched in radar detectors, CB radios, and power inverters make their foray into the world of dash cams, it’s best to pay attention – especially when that name is Cobra. Cobra’s DASH Series dash cams are here and work alongside their established iRadar driver alert app and Drive HD playback software, with the extra twist of throwing a secondary camera into the mix. When the box for the system arrived on my desk, I was excited to dig into the DASH 2316D and explore all of its features. 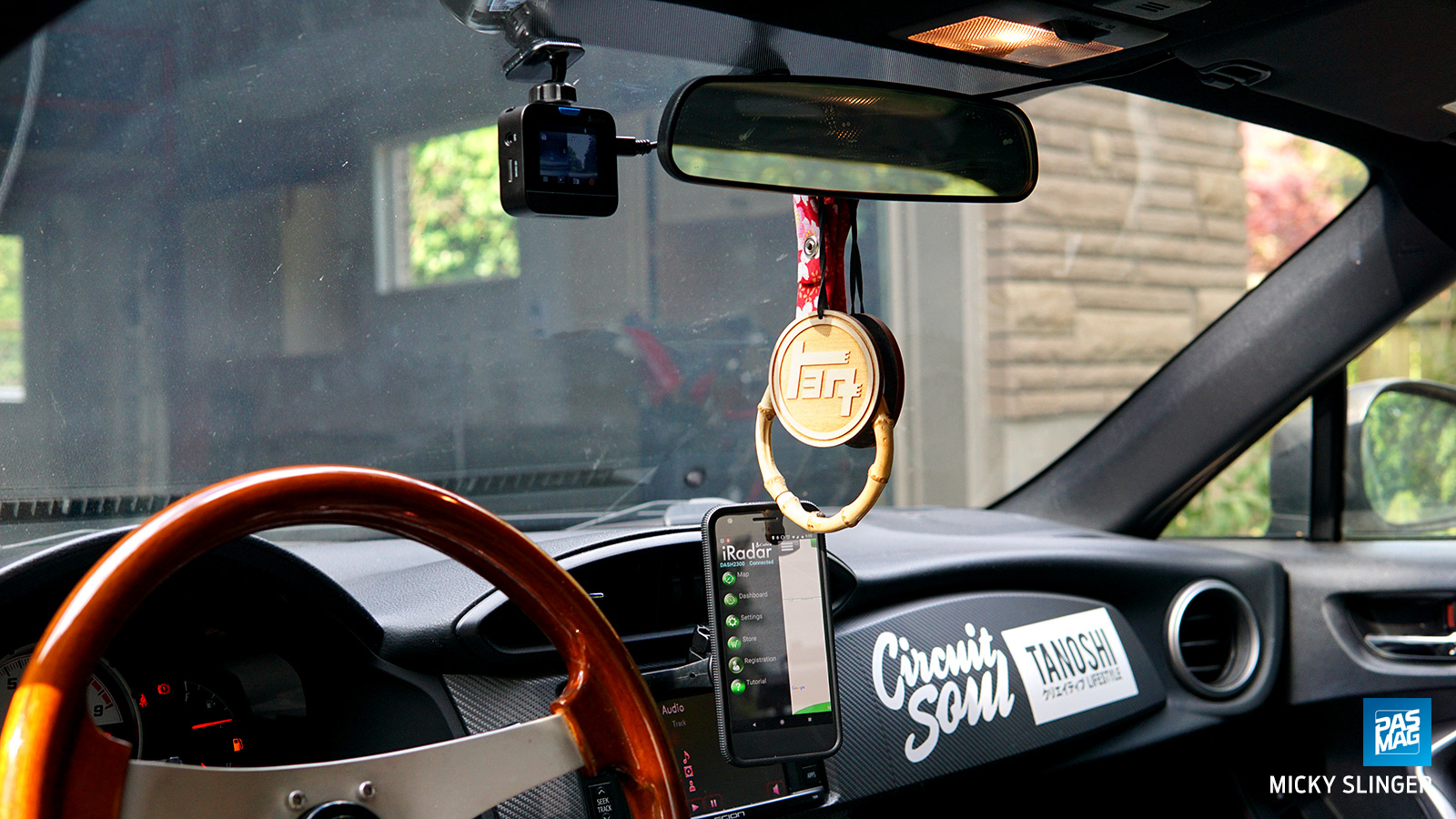 At first blush, the packaging of the DASH 2316D is sleek and informative. A window that wraps the side of the box shows off the lenses of the dual cameras, and a small sidebar ticks off the major highlights of the unit. On the back, these highlights are explained in greater detail. 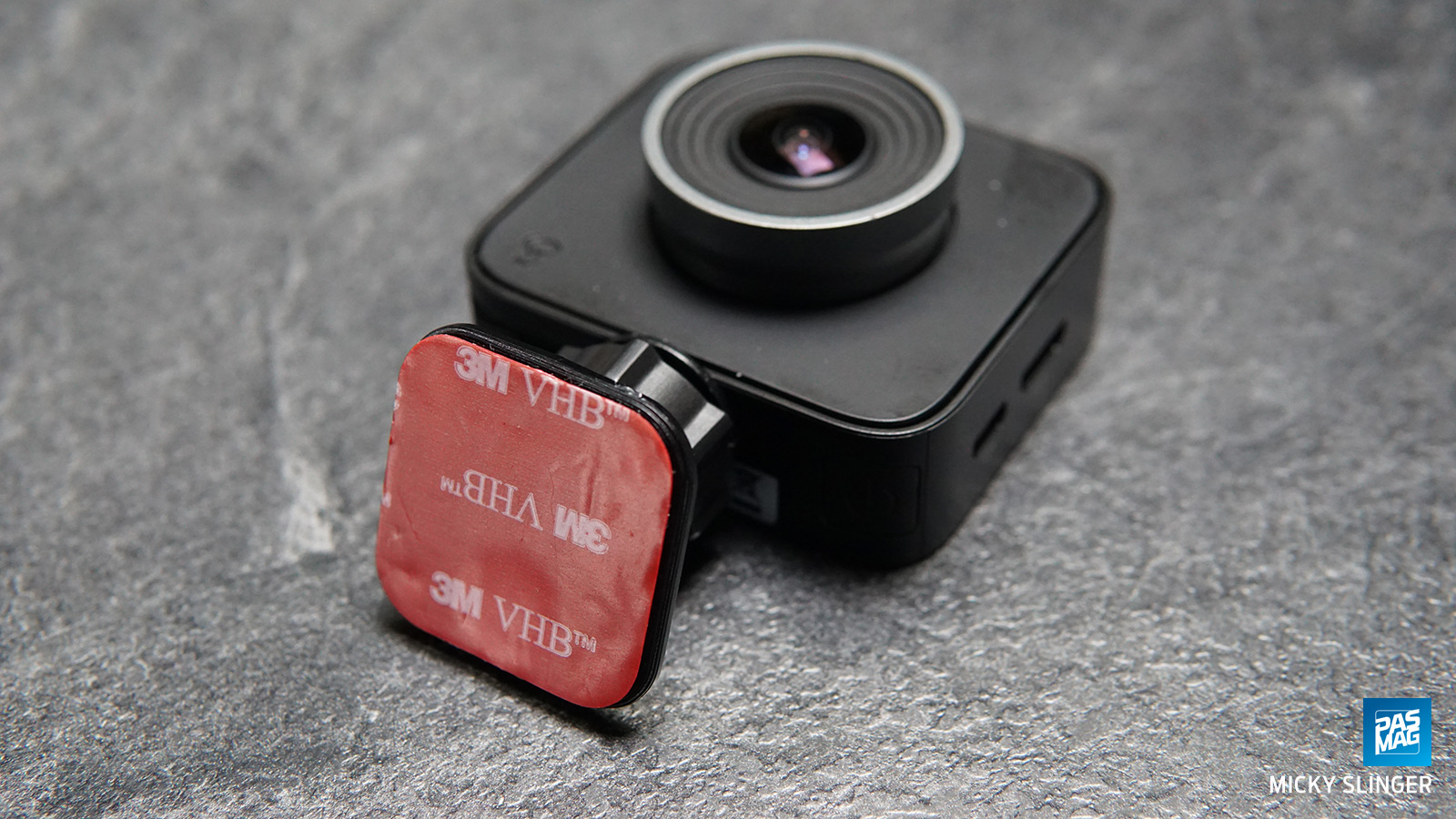 When I got the packaging open, the cameras were neatly packed into their own enclosure, while the manuals, cables, and other accessories were stored in a separate box. Inside, I found a front camera (CAM 1), a rear camera (CAM 2), a 12-volt charger, two micro-USB cables (one regular sized, and the other 10-feet long), a Y-splitter cable, and an optical extender cable for CAM 2. The thing I was most excited about was the fact that a micro-SD card was included, and that it was 16 GB! Normally, dash cams don’t come with an SD card for recording, so an extra trip to the store or Amazon to grab a sizable one is needed – not this time though. Definitely a big plus. 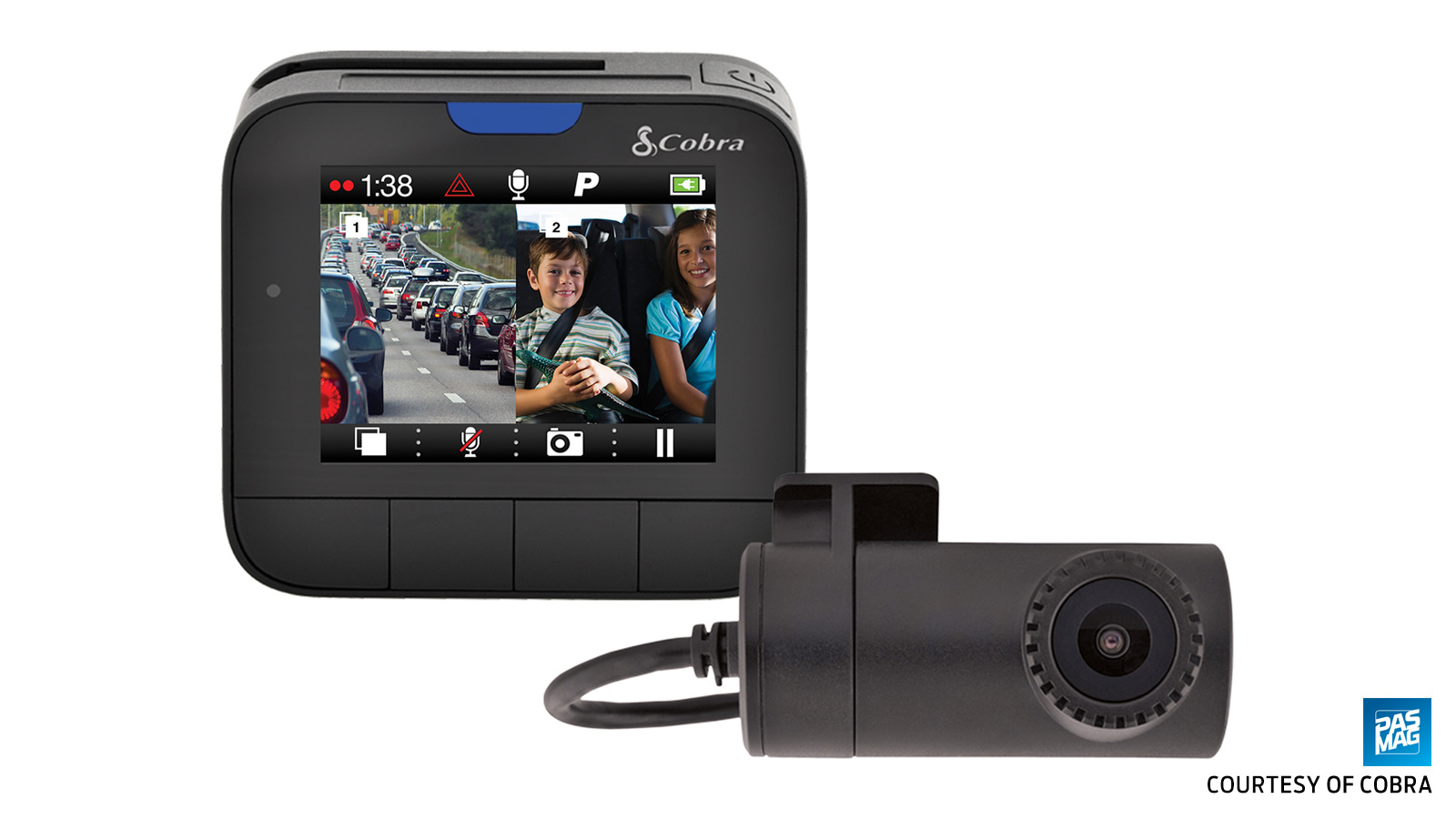 Both cameras share a modern design, with CAM 1 having a display screen on the back with four navigation buttons and a bright blue “Emergency Recording” button surrounding it, while CAM 2 has a mount for the windshield only, but features an adjustable ratchet inside to tilt the camera up and down with a secure click. A slider rail on top of CAM 1 allows the locking swivel mount to be slid onto the top, which, like the built-in mount on CAM 2, is topped with 3M adhesive to ensure nothing is coming off while you’re driving. CAM 1 features 1080p recording resolution, while CAM 2 captures 720p. 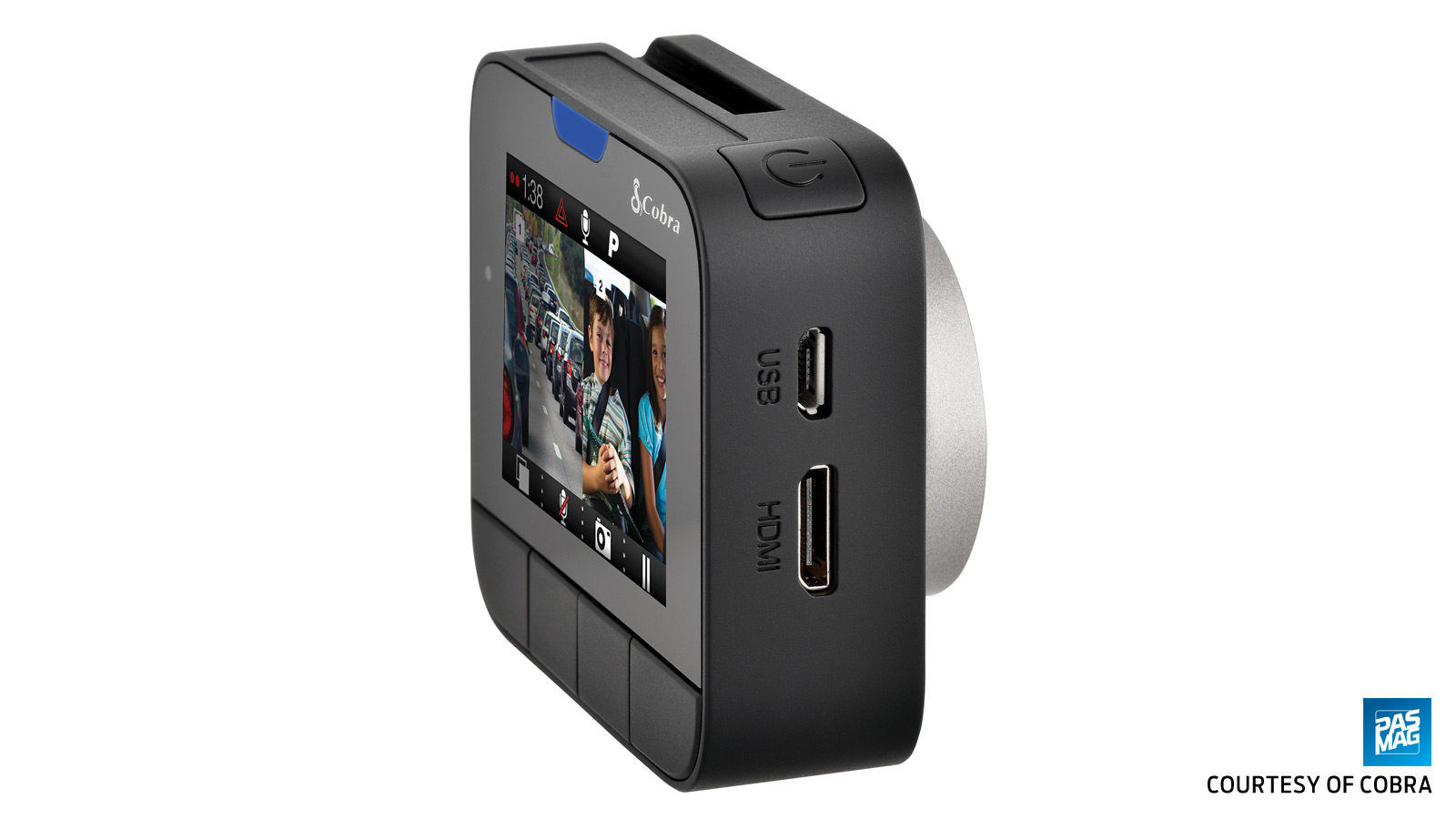 The tri-fold manual inside is laid out with helpful pictures on both sides, making setup look less daunting. There’s also mention of the software you’ll need to download to get the most out of your Cobra dash cam: the Drive HD player, available from Cobra’s website, and the iRadar app that you can grab from Apple’s App Store or Google’s Play Store – both free of charge. 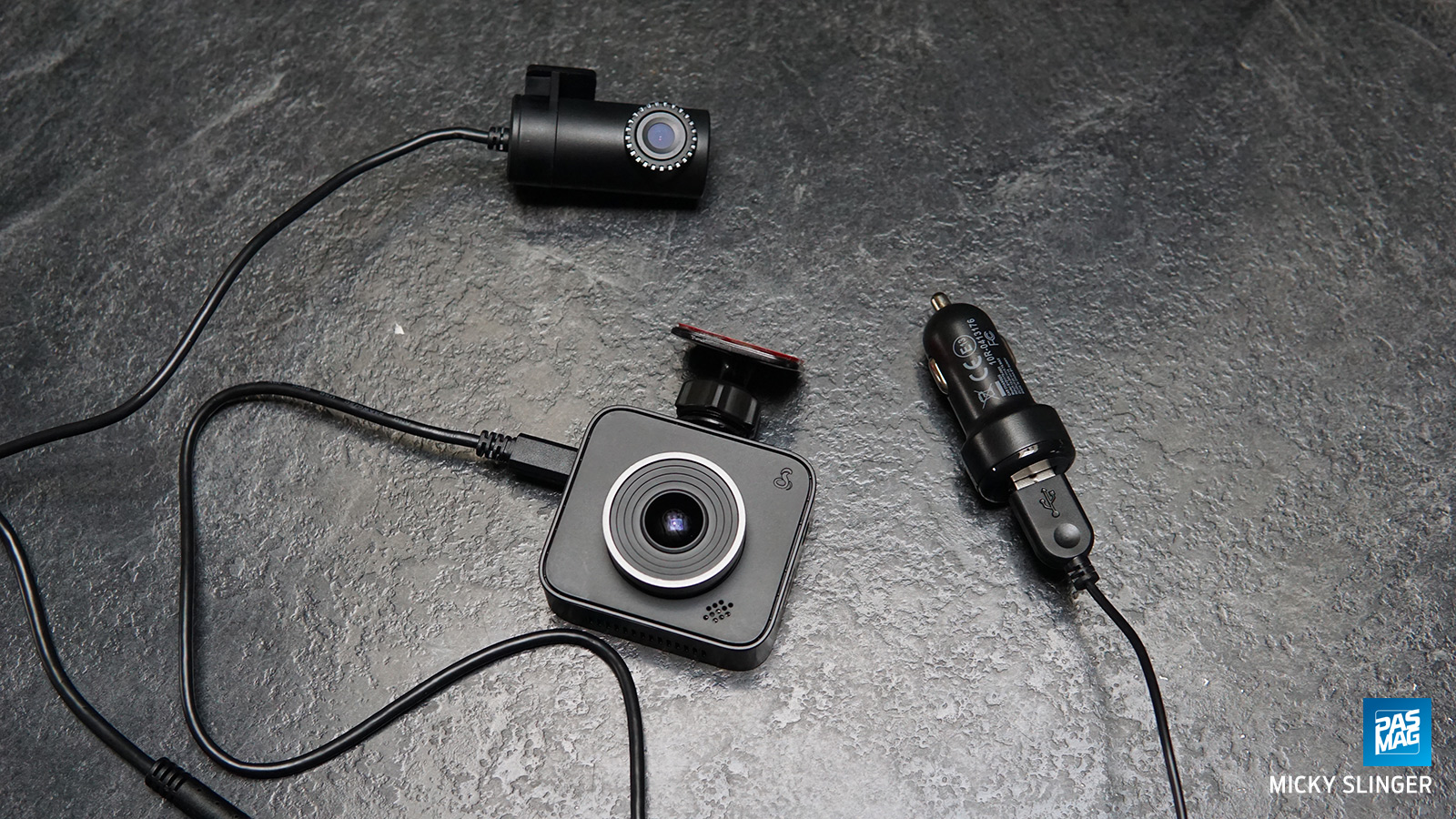 Referring to the manual’s graphics, I connected the Y-splitter cable into CAM 1’s micro-USB port, and then followed the USB side of the splitter with the 10-foot USB cable and 12-volt charger. The other side of the splitter was joined with the optical extender cable for CAM 2, since I would be mounting the second camera out the back window of my car. Alternatively, you can also skip the extender cable and mount the camera facing you and your passenger(s), or skip CAM 2 altogether and only use the front camera, which the box tells me unlocks “Super HD” resolution. 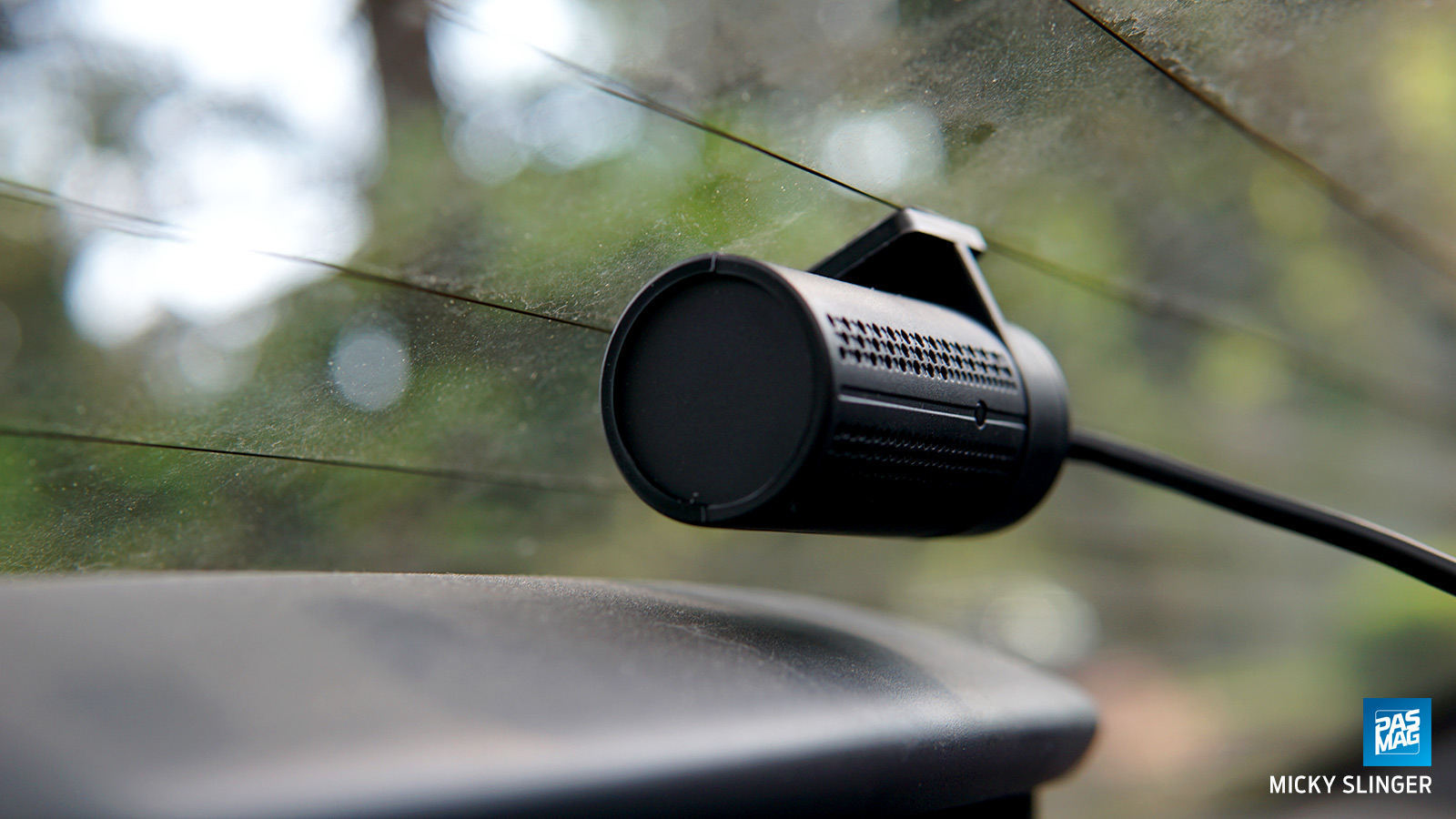 With everything connected, there are some long lengths of cable (especially with CAM 2 mounted in the back), so if you’re unlike me and not just installing this system for review, I’d advise you install it up inside the headliner or get someone to professionally hide it away for daily ease of use. 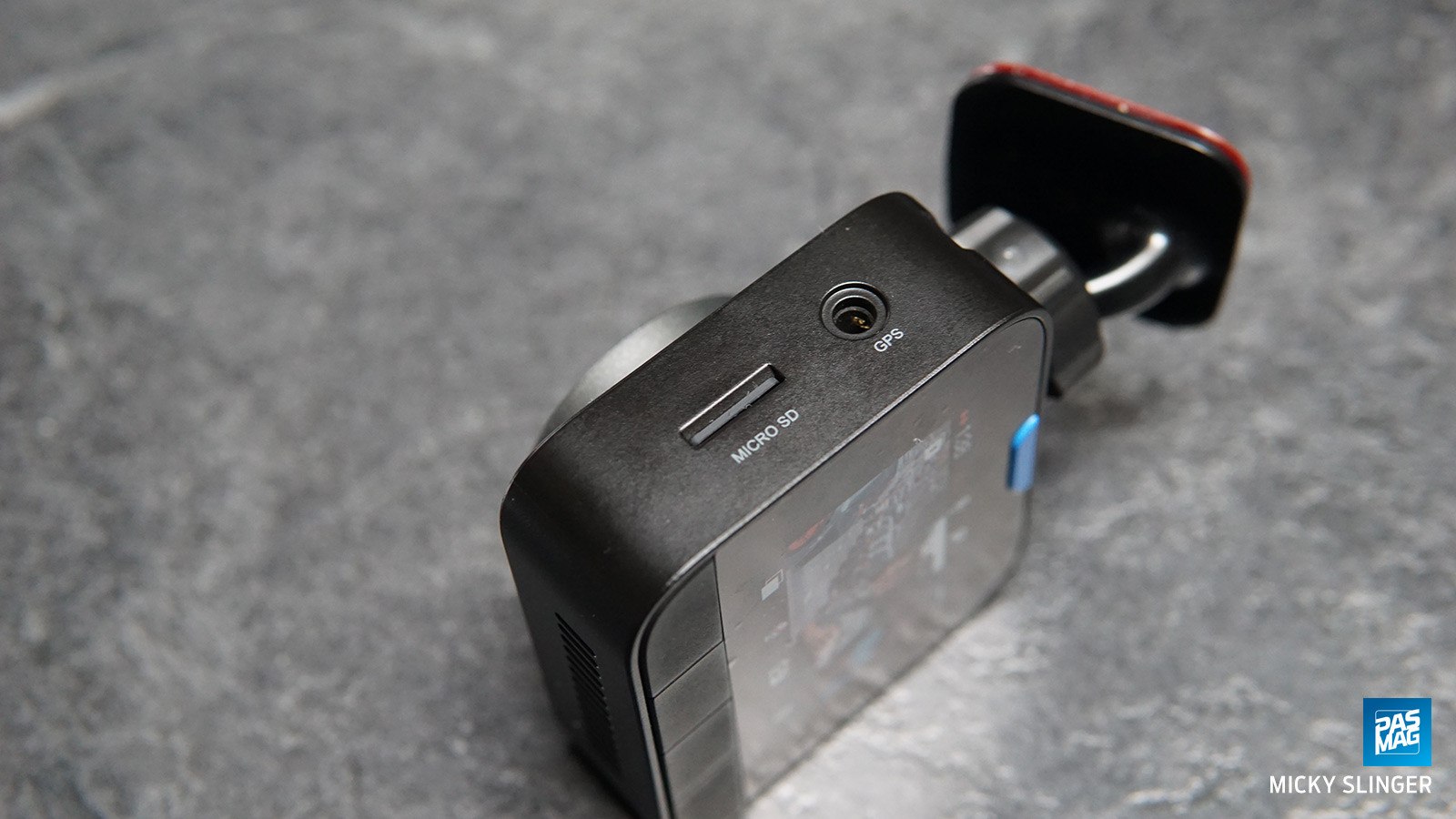 After inserting the supplied micro-SD card in CAM 1, mounting the cameras in the front and rear, tucking away some extra lengths of cable, and plugging in the charger to my car’s 12-volt outlet, I was good to go. I also downloaded the iRadar app on my phone to pair with the system, which happens as easily as connecting to the “Drive HD” option from your available Bluetooth devices on your phone with the iRadar app open. 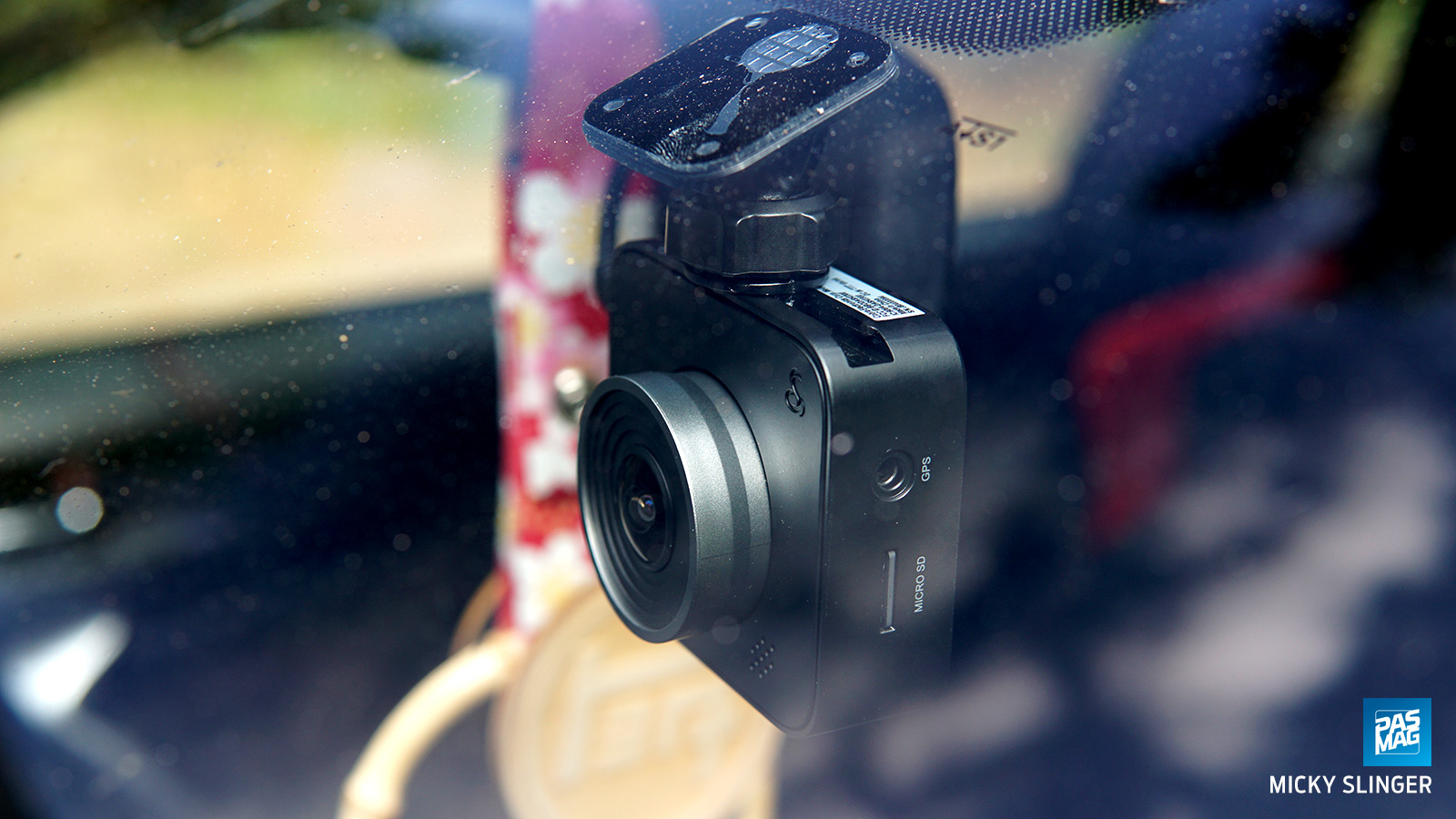 I had a dinner with a friend of mine who lives a bit away from my place the evening of my review, and since the drive consists of country roads, city streets, and even some highway driving, I figured this would be perfect for testing. When I turned on the car, the front camera chimed and the screen sprung to life just seconds after. The display screen showed both the front and rear views from the cameras, and the grey Bluetooth symbol changed to white as another chime let me know that CAM 1 had connected to the iRadar app on my phone. 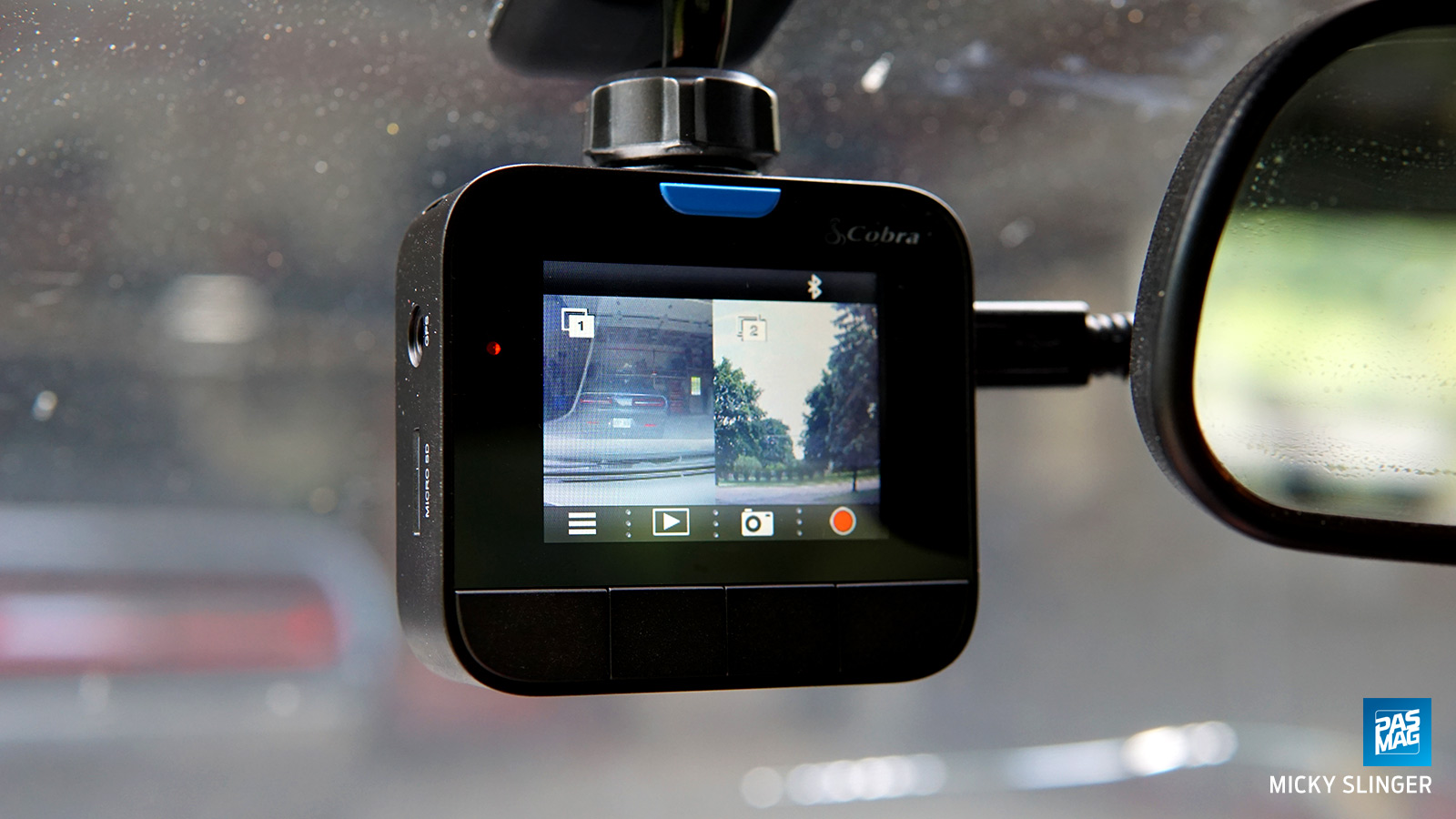 I chose to have both views present on the screen as I drove, but you can choose between both, or only front or back. I also enabled the microphone to see what the DASH 2316D’s audio recording capabilities were like, and then set off. While driving, I was concerned about camera shake. My car is on coilovers, which are set fairly stiff, so I was worried that some extra jostling from the ride would make the footage a little rough. Upon review in the Drive HD playback software though, I was happy to see that things were smooth and clear. The Drive HD software pairs up the footage captured from both cameras and stitches them together. You can view either one by itself, but my favourite way to watch was with CAM 2’s footage in a smaller screen on top of CAM 1’s; kind of like a rear-view mirror. 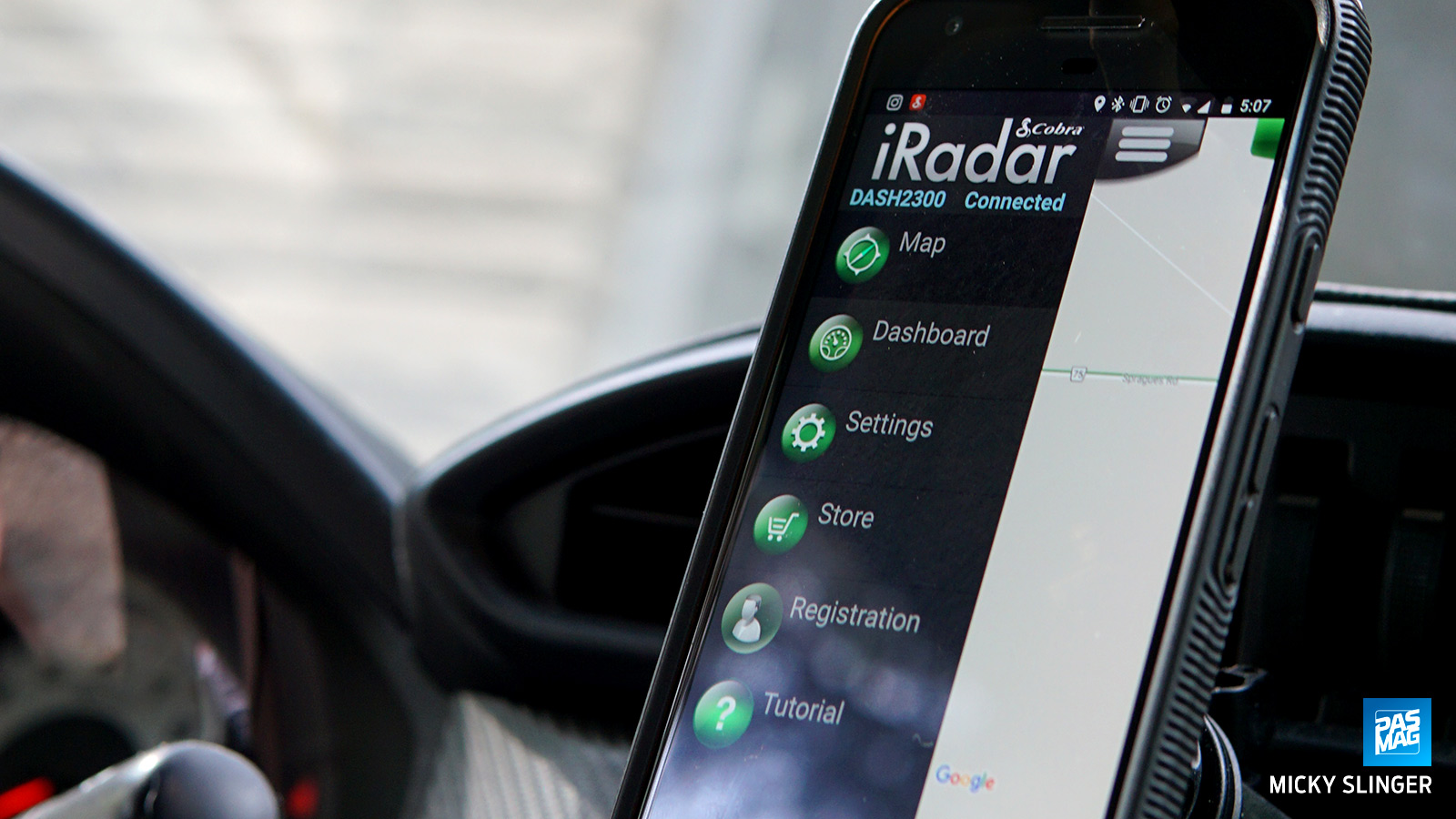 Although I didn’t receive any alerts about speed traps or stoplight cameras, the iRadar app was busy the whole time I drove. In a pullout tab on the right side of the playback screen was all my driving data: how far I went, the route I took, what my speed was, and bumps in rougher roads were recorded with the G-sensor – all matched up perfectly with the video as I watched. The microphone also worked well, picking up a little engine noise from outside, as well as music and most sounds inside. Good thing I wasn’t singing!

With solid recording capabilities, speed and camera trap warnings, plus the ease of use of a system that lets you set it once and then forget it, the only thing I can see you worrying about with the DASH 2316D are the road's little surprises – but at least you'll have those recorded. There are even lane departure and collision warnings that can be enabled for extra security on your travels. If you’re looking for a dash cam that adds peace of mind to your daily commute or road trip, I’d dash for a fully-featured Cobra unit like the 2316D. Cobra also offers three other camera systems in the DASH lineup, so make sure to check those out at www.Cobra.com to find the right fit for you. www.cobra.com, https://twitter.com/CobraElectronic, https://www.instagram.com/COBRAELECTRONICS, https://www.facebook.com/CobraElectronics, https://www.youtube.com/user/CobraElectronicsTV 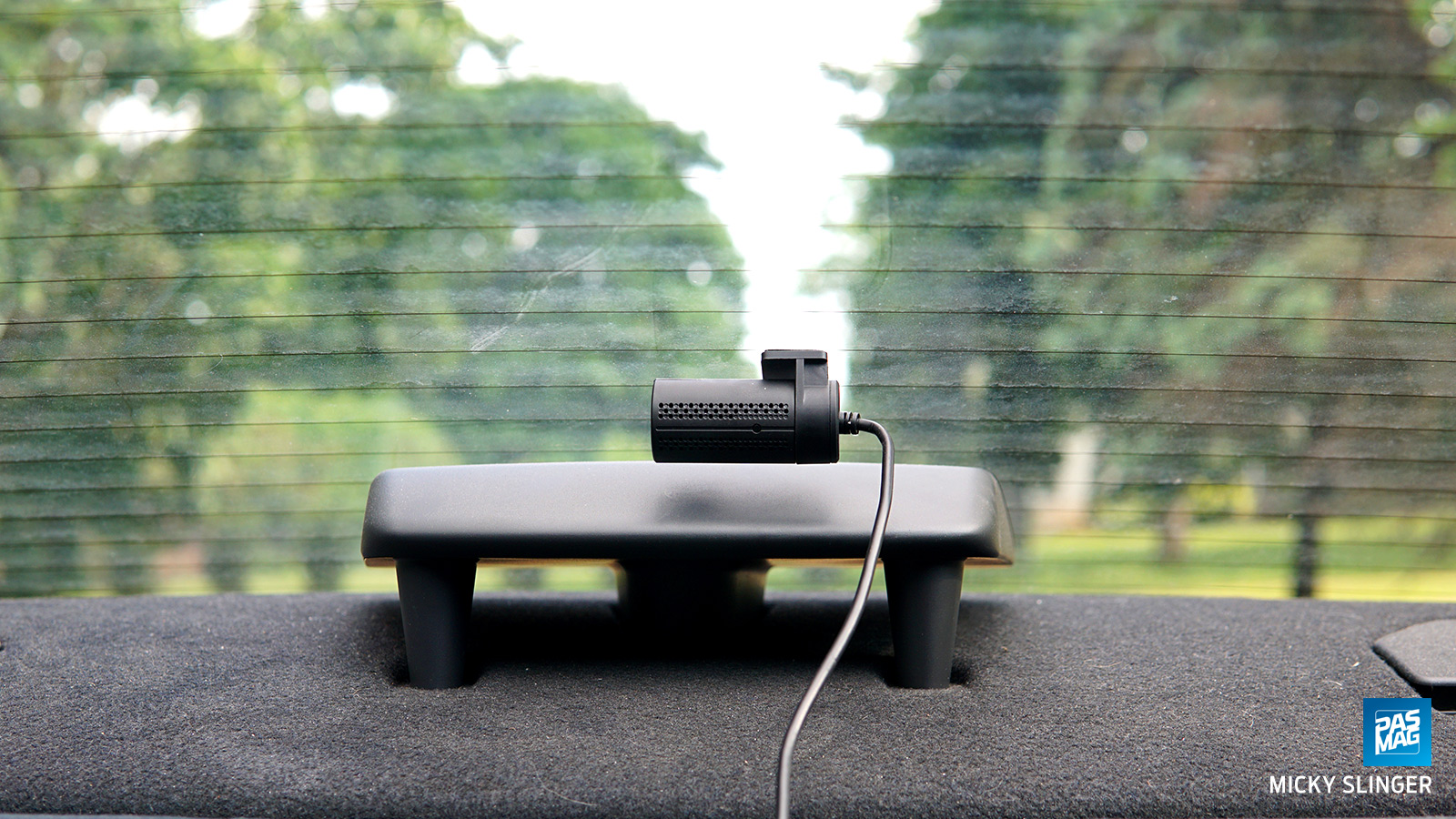