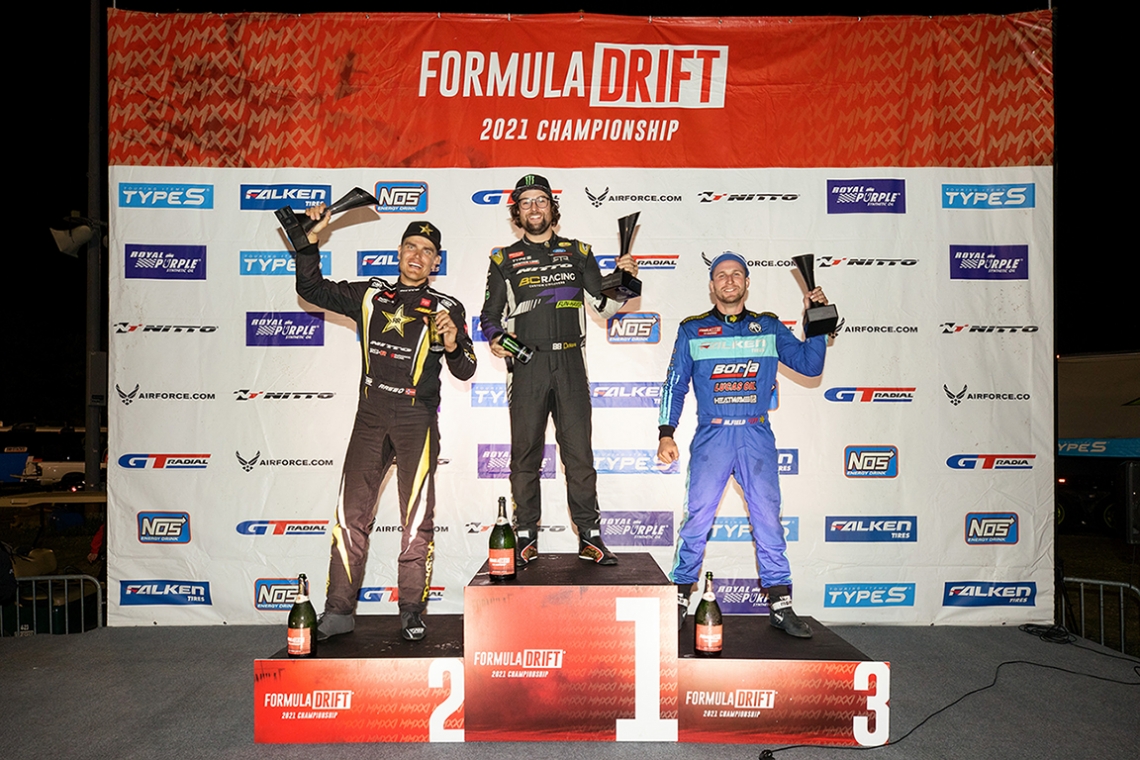 Following the successful debut of the new drift arena in Englishtown, NJ for Round 3 of the 2021 Formula DRIFT PRO Championship, the teams relocated to another new track for Round 4: Borderlands, which would be hosted by Lake Erie Speedway in North East, PA.

The 3/8-mile oval track is popular with local drift racers but was totally new to the majority of FD PRO drivers, who would also need to contend with rain for Friday’s inaugural Knockout Qualifying Format (KQF) to decide the positions for Saturday’s competition heats.

To ensure high-speed action, Formula DRIFT created a new course layout for the teams, providing three sweeping Outside Zones that rewarded smoothness while encouraging proximity for the large crowd to enjoy during the tandem competition runs. 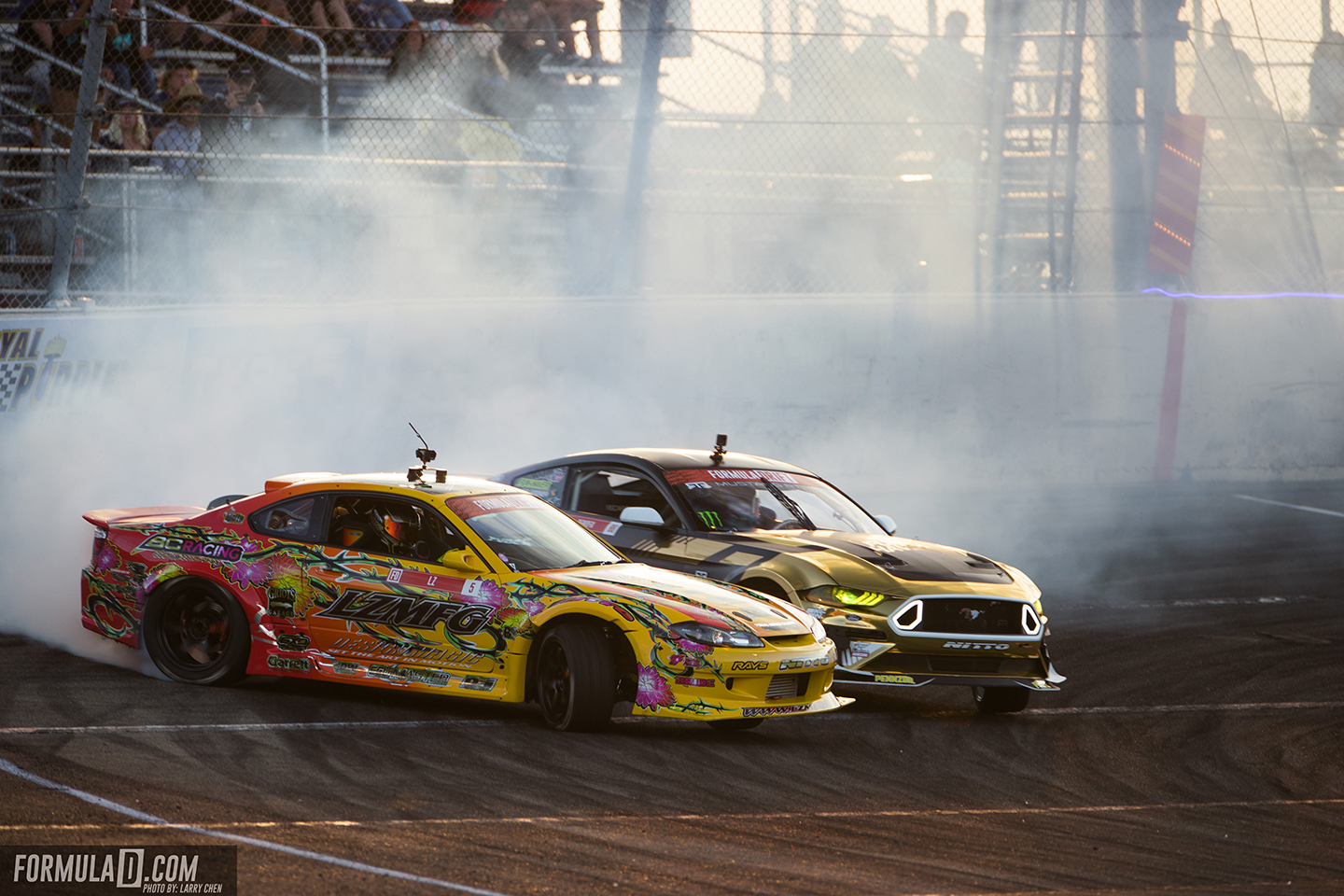 The combination of a new track, heavy rain and a sprinkling of technical problems catapulted some different names to the top of the qualifying positions. Among them was fan-favorite Adam LZ (USA) who qualified first in his LZ S15. Having joined the PRO Championship as a rookie in 2020, FD Erie represents the peak of his extraordinary career and indicated there’s plenty more to come.

Second place was secured by 2015 FD Champion Fredric Aasbo (Norway) driving the Rockstar Energy Drink Toyota GR Supra. Sitting third in the 2021 driver’s Championship, the Norwegian is always a threat and looked strong in the rain.

With a new name at the top of the qualification table, there was an unusual one at the bottom: 2011 FD Champion Daijiro Yoshihara (Japan) was in 29th; his lowest qualifying position since he joined FD in 2004. Unfortunately, Dai continues to have a challenging 2021 season in the Turn 14 Distribution / Falken Tire / ENEOS Oil Subaru BRZ.

Two places above him in 27th was three-time FD Champion Chris Forsberg (USA) in the NOS Energy / GT Radial Nissan 370Z. He was a beneficiary of the new Knockout Qualifying Format, which gave him a second run after a technical problem dictated he abort the first.

Forsberg reported a repeat of his drive-by-wire throttle problems, which had caused him not only to qualify 31st at Round 3, but would lead him to concede to Matt Field (USA) in the Final.

With the team continuing to work on the throttle body, trying to prevent it shutting of its own accord, they were hopefully the 370Z would be stronger for the first heat against Aurimas “Odi” Bakchis (Lithuania) who held second in the 2021 FD PRO Championship driving the Falken Tire / Feal Suspension Nissan S15.

Other teams facing problems included Federico Sceriffo (Italy). He advanced to the Top 16 for the very first time at FD NJ in the FFF Drifting Department Ferrari 599 GTB Fiorella. However, he didn’t travel to FD Erie after a team member was diagnosed with COVID-19.

Unfortunately, Ryan Litteral (USA) was again a no-show in the Powerstop Brakes Nissan S15, and Justin Pawlak (USA) blew an engine during practice in his Falken Tire Ford Mustang and was forced to withdraw.

With 29 drivers remaining for the Top 32 heats, the three top qualifiers would all get bye runs into the Top 16 heats. 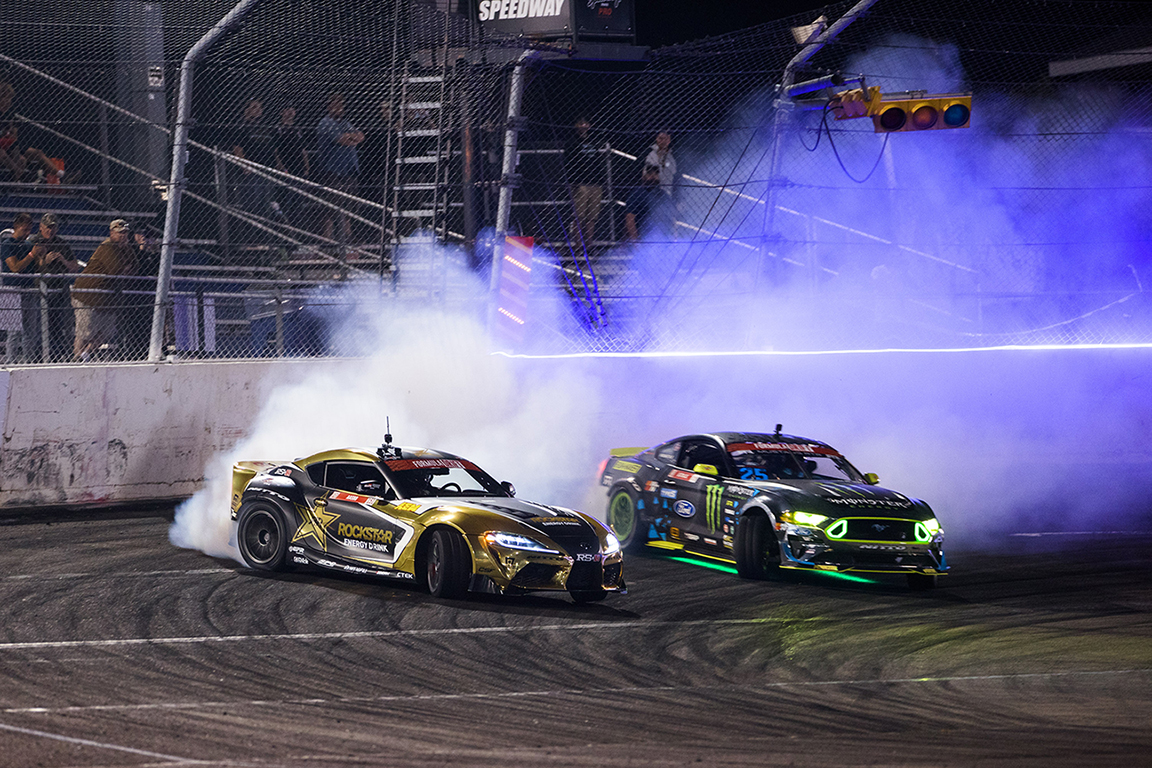 With his bye run promoting LZ into the Top 16, an expectant crowd saw him position the LZ S15 alongside Chelsea DeNofa (USA) in the BC Racing / Nitto Tire Ford Mustang RTR Spec 5-D. With more horsepower and experience, DeNofa is always a major threat and after a good lead run, LZ knew he needed to pressure DeNofa from the chase position. Unfortunately, this resulted in a meeting with the wall in Turn 1 shortly after initiating. The impact created a gap between the two drivers and was enough to send LZ back to his trailer to prepare for Round 5.

For DeNofa, his LZ victory was the second heat in his march to the Final – his first in the Top 32 had been against Jhonnattan Castro (Dominican Republic). His Gerdau Metaldom / Mobil1 / Nexen Tires Toyota 86 TRD span out of contention in Outside Zone 3 while trying to maintain proximity with DeNofa.

Moving into the Top 8, DeNofa’s next rival was Kazuya Taguchi (Japan) driving the Upgarage / ISR Performance / GT Radial / Jerry Yang Racing Toyota 86. There was little to separate the two after their tandem runs but the judges favored DeNofa’s lead run and awarded him the win.

DeNofa’s opponent in the Final 4 was FD PRO Championship points leader, Matt Field, who had an early scare when he damaged his car in pre-event practice. Happening shortly before the competition heats, Field chose to use his 5min Competition Time Out (CTO) to replace the steering rack. Possibly sensing weakness, DeNofa pushed Field hard on the first run, achieving incredible proximity throughout the course. With the pressure on Field to drive equally aggressively, he made a mistake and surged forward into Outside Zone 2, forcing him to correct. As he straightened and appeared to get lost in DeNofa’s smoke, Field ran off-track and his day was done.

On the first run, Aasbo set an incredible pace, filling the three Outside Zones with precision. Gittin was slow to initiate but caught up quickly and the pair finished together to cheers from the appreciative crowd. But then things got crazy on the second run.

With the gauntlet thrown, Gittin made a blistering start and Aasbo was similarly slow to initiate. The Norwegian seemed to struggle with the transition into Outside Zone 2 and was forced to abort his drift. It happened fractionally after Gittin had over-rotated in Outside Zone 3 and was also forced to lift and straighten. The judges assessed Gittin’s run incomplete, awarding the win to Aasbo.

The only hitch was Aasbo’s broken rear suspension, which the team was given 7min to repair. As the clock ticked down, the team segued in its 5min Competition Time Out. However, it wasn’t sufficient for such extensive repairs and Aasbo had to concede the Final to DeNofa.

As the first driver to win two rounds this year, DeNofa jumped from fourth in the FD PRO Championship to second behind Field, who hangs on with a narrow 19-point lead.

“I’d actually been here about 13 years ago, so it was cool to see the track layout from behind the wheel of an insanely well set-up car,“ DeNofa told us after the podium ceremony. “I didn’t know what to expect but the fans were amazing, packed in, tuned-in to everything – they were pumped to have us here and we were pumped to be at the track.

“Unfortunately, we had some rain yesterday, so I didn’t get many practice runs. And I only had one chase before going into the heats, so we were learning as we went along – but it was a level playing field because most teams were in the same position,” he continued.

“I have to admit, I deliberately qualified poorly because I prefer to chase first. That worked out and we were able to chip away in the heats. We took it all the way to the podium and while it’s unfortunate we didn’t get to run against Fredric, I did get to do a Victory Lap, which I’ve never done before. I was pumped to run at 150% without caring what happens because as soon as you run, you’ve won.

“I really want to continue the momentum that’s given us two wins out of four this year. Going into Seattle, I typically don’t do well there but I’m local so have recently driven it a few times and learned a few things. Now the team has a list of things we want to improve to continue evolving the car and keep progressing because anybody in the top ten still has a chance to win the title.”

Before hitting the hotel mini-bar we tracked down Formula DRIFT President, Jim Liaw: “We’re very happy to have added this amazing facility in the Great Lakes area to the 2021 Formula DRIFT schedule. The crowd came from across the mid-west and eastern seaboard, and we’re hoping to see Canadian visitors once the borders open up. We’ve built a great foundation here for years to come in terms of the close competition we can expect and engagement with the fans. I really hope they enjoyed the inaugural Formula DRIFT event at Lake Erie Speedway – it certainly looked as if they did – and we have tremendous opportunities to grow from here. So, we’ll evaluate how everything went and see how we can make the 2022 event even stronger!”

Subiefest 2020: World Record Attempt and Charity Drive
One of the biggest gatherings of Subarus in North America took place over the weekend - Subiefest 2020! The event went down at the OC Fair & Event...