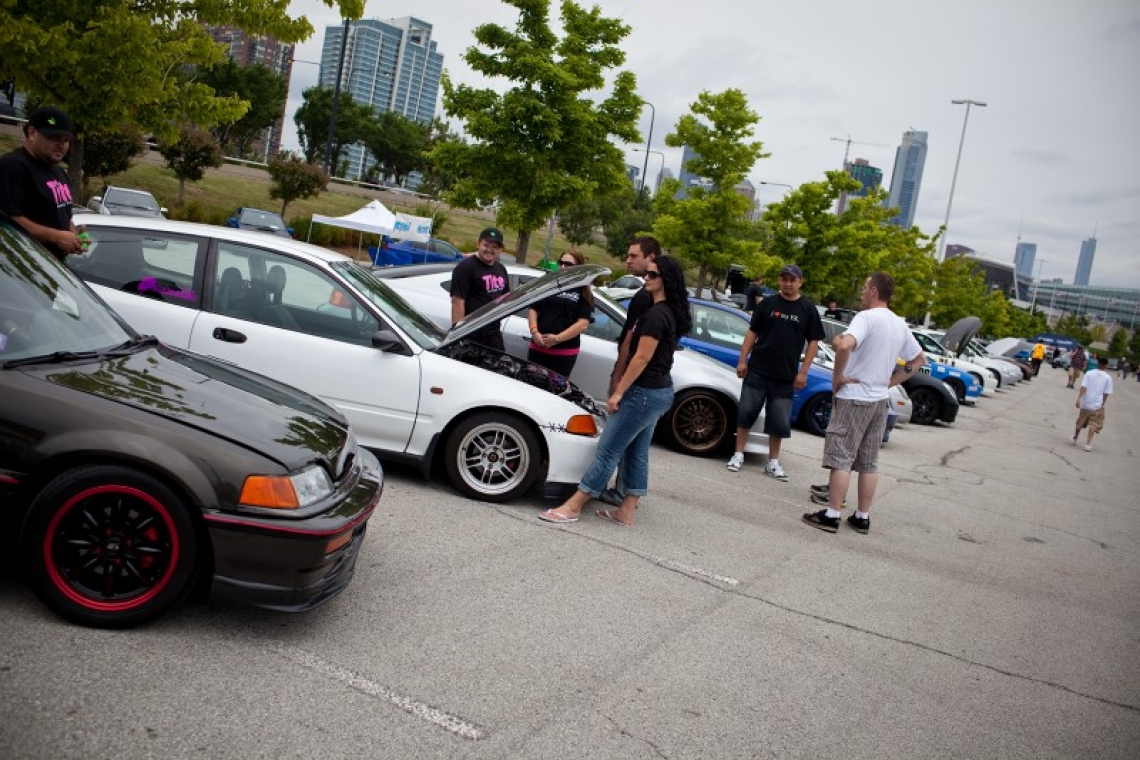 The history of the D1 Grand Prix drifting series in the USA has always been a roller-coaster ride of events. In 2009, the series was in the hands of a proven and stable management team at Driven Events led by Rich Goodwin of HIN fame. With lots of talent and solid financial backing, D1GP USA promised to bring all the exciting elements of the Japanese series back to US soil. The events so far this year have been well attended and jammed with action. At Round 3 Chicago, the controversy heated up to a boiling point where fines and major points deductions were involved.

The event was progressing smoothly but the drama unfolded as the Great 8 competition was underway. Apparently there was some prior animosity between Forrest Wang in the S14.5 and Team Orange’s Kazuhiro Tanaka spilling over from Round 1. Tanaka was of the belief he should have beat Wang at Anaheim, who instead advanced only to lose against Team Orange’s Nobushige Kumakubo. As fate would have it, Tanaka and Wang would face-off again in Chicago where Wang got a huge jump on the start and Tanaka let off 50-feet from the starting point. As the judges went to the replay, they determined there would be a restart.

“This is where the confusion comes in,” said Goodwin. “Apparently Team Orange did not know that we called a re-start and believed we had called for an OMT. Possibly this was a language barrier issue. We are not sure. After the re-started run, it was a clear victory for Wang, but Tanaka went back to the starting line expecting to run again. Team Orange was informed of the Wang victory and this is where the infractions begin.”

At this point, the Japanese drivers went “berserk” and threatened officials with their cars. One D1 Marshal was in front of Tanaka at the starting point with his hand in front of the car preventing him from proceding. Tanaka nosed up his car against the officials leg and began to rev the motor. A Team Orange pit crew member came over and slapped the officials arm several times in order to allow the competition to continue. Tanaka then did a huge burnout and made an obscene gesture to the crowd. Making matters worse he wasn’t paying attention to where the Marshal was standing and hit his knee with the bumper and ran over his foot. From there Kumakubo officially withdrew in protest and the infractions added up.

Harri Hokkanen was awarded 3rd by default and Wang advanced to the final battle with Ken Nomura in the Blitz R34 Skyline. The tandem runs were pretty one-sided for Nomuken in the big Skyline sedan, which carried more speed and angle engrossed in clouds of smoke. However, Nomura’s conduct was also questioned when he showed his displeasure about the whole incident involving his countrymen.

Emotions ran high and errors in judgment have changed the outcome of the D1GP 2009 series forever. With fines totaling $17,500 Team Orange withdrew for the season soon afterward. We trust the D1 management can pull together and appease the Japanese drivers in order get back to providing more drifting entertainment in the US.