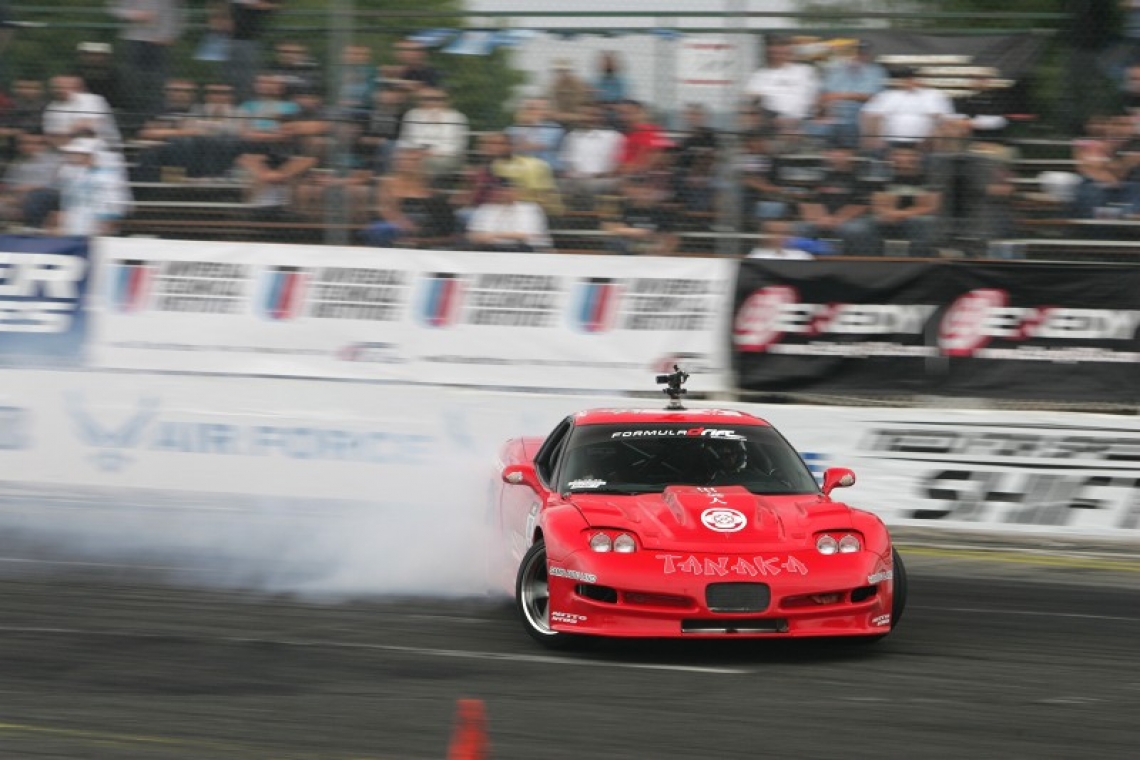 Round 5 of the 2009 Formula Drift season slid into the Emerald city of Seattle, Washington in August, and more than 30 drivers were competing for precious championship points. Entering the event, 7 drivers were within 100 championship points of leader Chris Forsberg. The fans in the Northwest are some of the best in the sport, and the high-speed 5/8 mile banked oval track is one of the fastest on the Formula D Circuit. In previous Formula D events at Evergreen, there has always been at least 1 crazy crash, and 1 driver on the podium who earns their first career podium at the event. This year would be no different.

In practice, Discount Tire / Falken driver Dai Yoshihara had a huge crash which likely totaled his Discount Tire Center IS350, and in Tandem, Vaughn Gittin Jr and Eric O’Sullivan had a crash on the big bank which rendered O’Sullivan’s Rockstar / Hankook Subaru STI unable to continue. Fortunately for O’Sullivan, the judges reviewed videotape and determined that JR had initiated contact with Eric which caused him to spin before JR’s 2010 Ford Mustang collided with the Subaru a second time, and Eric was given the win. Since Eric’s car was beyond repair given the timeframe, the winner of the Chris Forsberg / Tyler McQuarrie V8-powered 350Z roadster showdown in the other semifinal would be the winner of the event, while the other driver would have to face JR for the final podium position. Forsberg’s NOS Energy Drink / Maxxis Tires 350Z Roadster was too much for McQuarrie as he earned his 2nd win and third podium of the season, while McQuarrie was able to recover and beat his Falken Tires teammate JR in the consolation round to earn his 2nd podium of the season as well.

Leaving this event, Forsberg now has a commanding lead for the Formula D Championship, and with 3 podiums in 5 events, it’s his to lose. For O’Sullivan, his first podium puts him in the lead for the Rookie-of-the-year race. Stay tuned to PAS Magazine and PASmag.com for full coverage of all of the Formula D events!