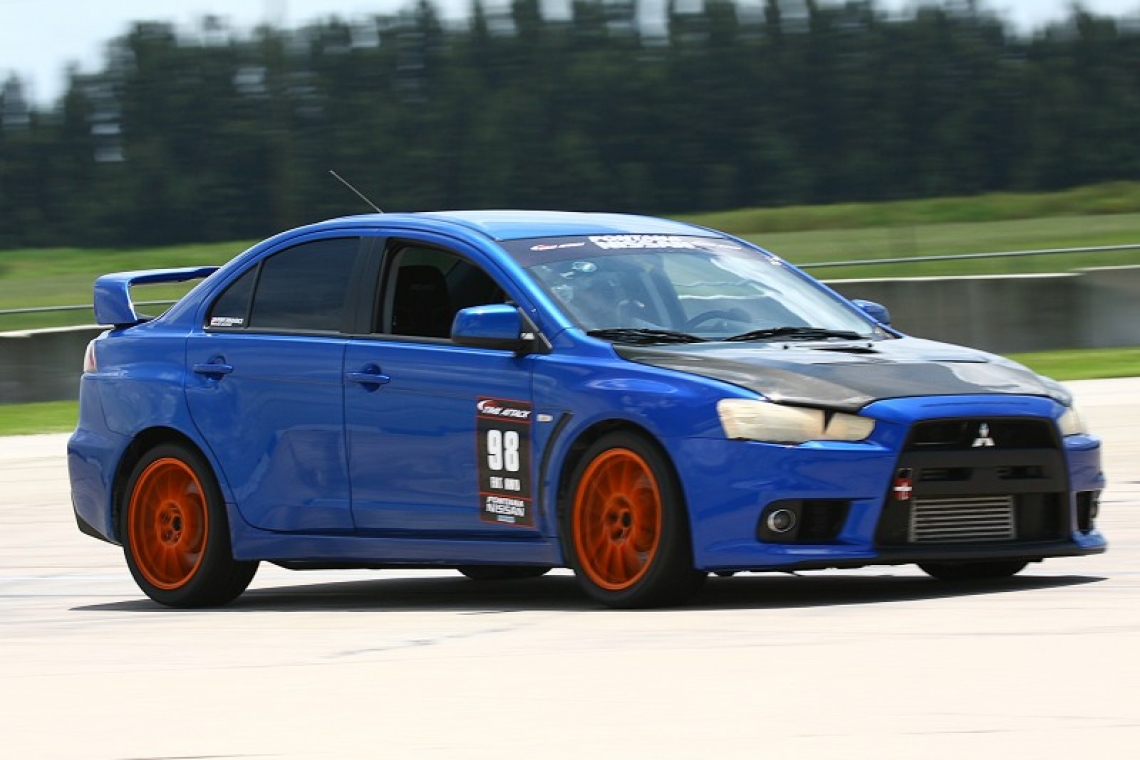 The historic Sebring Raceway played host to the final East Coast round of the 2010 Redline Time Attack season this past weekend. The weather was hot and the competition was even hotter as drivers battled for the East Coast championships. The competitors were comprised of a mix of this year’s hottest cars, new cars we’ve never seen, and some old cars we haven’t seen in a while. Forged Performance and BC Racing Suspension both share a bunch of past successes in previous seasons of Redline Time Attack, however, neither has made an appearance since 2009, but there were also plenty of familiar faces from this year’s events.

Professional Awesome, Turn In Concepts, VS Motorsports, Ricca Racing, Fortune Auto, and S-Max Intercoolers all made the trek down to the sunshine state to battle yet again. We also saw the return of Chris Rado to Redline Time Attack. The team and their infamous dual-winged Scion tC Super Modified FWD car showed up at the last round in Willow Springs, however Gary Sheehan was behind the wheel. After a few month hiatus, Chris Rado himself returned with both the FWD car and a new highly anticipated Super Modified AWD car. Yes, it also has two wings.

As practice got under way it was a battle between Chris Rado’s FWD Scion tC and Tony Weisenhahn in the Turn In Concepts Subaru WRX, both jockeying for the top spot, despite running in separate classes. In Saturday’s practice day, Turn In Concepts suffered a major engine issue, but the team went hard to work through the night to completely remove, tear down, and re-install the motor in time for Sunday. Their hard work paid off as Tony Weisenhahn piloted the car to an overall event victory with a 2:16.379! Turn In Concepts became the second Modified AWD class car to take an overall event victory in time attack history. Chris Rado suffered major brake issues all weekend in his World Racing Scion tC FWD car, but it was oiling issues within the engine that took them out of competition before being able to put down a lap time. Unfortunately for the World Racing camp, their brand new AWD Scion tC also suffered major issues with ignition issues that the car battled all day long, but couldn’t get the car running until the competition was already over.

Neither Chris Rado in his new World Racing Scion tC, nor Kris Von Sydow in the VS Motorsports Mitsubishi Evo were able to put down a lap time in the Super Modified AWD class, leaving the door wide open for new comer Cam Worth in his Mazda RX7 to take the overall Super Modified and Super Modified RWD class victories with a 2:24.841. Just barely getting nudged into 2nd place was a familiar face in a new car. Sharif Abdelbaset brought out a gorgeous Porsche 911 to compete in the Super Modified RWD class and despite a brush with a tire wall in practice, Sharif was able to lay down a 1:24.956 securing his 2nd place. Jeff Ricca in the 240SXMotoring.com/Ricca Racing Nissan 240SX took home 3rd place, running into mechanical issues and only being able to squeeze out a 3:09.465, but the points he gained helped him clench the 2010 Super Modified RWD Championship for the East region. Sean Yearwood drove the P2R Honda Accord to a 2:38.838 clenching the Super Modified FWD victory with JG Pasterjak in the Grassroots Motorsports Magazine Project MINI Cooper S brought home 2nd with a 2:43.520.

Tony Weisenhahn and the Turn In Concepts Subaru WRX were the story of the day in the Modified Class taking home not only the overall event victory, but also the overall Modified Class and Modified AWD class victories with their 2:16.379. Too add the icing on the cake, Tony Weisenhahn and Turn In Concepts also took home the 2010 Modified AWD East Championship! Sharif Abdelbaset put on a good show in his Forged Performance Nissan R35 GTR running a 2:17.997 for 2nd place, while Whit Staples in the Fortune Auto Mitsubishi Evolution IX posted a time of 2:20.236 putting him in 3rd place. Ian Stewart took top honors in the Modified RWD class with his Porsche 911 running a 2:19.134 followed by Jared Stoops in his twin turbo Nissan 370Z with a 2:26.217 for 2nd. Hal Glen took 3rd place with his OS Giken Nissan 350Z running a 2:45.382. Dave Hary in the S-Max Intercoolers Nissan S14 wasn’t able to complete a lap in the competition, but his consistency in the other East Coast rounds landed him the 2010 Modified RWD East Championship. 2009 Street Tire FWD Class Champion Doug Wind moved his Continental Tire/Forced Performance Dodge Neon SRT-4 up to the Modified FWD class this year and took home yet another win with a 2:24.483. He also landed himself his second consecutive championship in the Modified FWD East class this time. Michael Mcinturf and Andrew Meek followed behind with a 2:40.936 and a 2:43.170 for 2nd & 3rd.

Professional Awesome has been turning a lot of heads this season in the Street Tire ranks with their Mitsubishi Evolution 7 and this weekend was no different. Dan O’Donnell piloted the Professional Awesome Evo to another overall Street Tire Class and Street Tire AWD victory at this event with a blistering 2:25.113 beating out 2nd place finisher Todd Reid in the Fortune Auto Mitsubishi Evolution 9 by two seconds. The Professional Awesome team also took home the 2010 Street Tire AWD East championship after their consistent performance! Reid drove the Fortune Auto Evo to a 2:27.285. Kris Von Sydow pulled double duty today in two different cars; one of them was the VS Motorsports E92 BMW M3 that Von Sydow was able to put on the top step of the podium in Street Tire RWD with a 2:32.854. Ian Stewart drove the OS Giken Nissan 350Z to a 2nd Place with a 2:35.775, while Raphael Santos in his Honda S2000 came in with a 2:45.861 for 3rd. Santos’ consistency and the points gained from this event were rewarded with the 2010 Street Tire RWD Championship! Blake Fuller ran un-opposed in the Street Tire FWD division but arguably had one of the most unique cars in the event. His weapon of choice is the Braille Batteries Nissan Altima Hybrid, the only hybrid ever to compete in Redline Time Attack. Fuller piloted the hybrid green machine to a 2:49.126.

The highly anticipated Super Session wheel-to-wheel sprint race at the end of the day is always the crowd favorite and 7 cars entered for a chance to race their time attack cars door to door to see who could cross the finish line first. Sean Yearwood was the sole representative for the Super Modified class, while Tony Weisenhahn, Whit Staples, Andrew Meek, and Doug Wind all represented the Modified class, and Dan O’Donnell and Blake Fuller represented the Street Tire Class. The green flag dropped and the battle up front between Whit Staples in the Fortune Auto Mitsubishi Evo 9 and Tony Weisenhahn in the Turn In Concepts Subaru WRX was tight, but unfortunately Staples ran into mechanical issues that dramatically started to slow his car down. Tony Weisenhahn in the Turn In Concepts Subaru WRX walked away with a huge victory, nearly lapping Fuller in the process. Dan O’Donnell in the Professional Awesome Evo 7 put in an incredibly impressive drive coming in 2nd overall and 1st for the Street Tire class. Sean Yearwood, by default, took the win for the Super Modified class.

Sebring International Raceway was an absolutely great place to host a Redline Time Attack event and we certainly hope to come back next season for a chance to break the records that were set here this past weekend. Until then however, our next event will be the weekend of September 18th & 19th out at Spring Mountain Motorsports Ranch in Pahrump, NV, just outside of Las Vegas. Be sure you show up to get in on all of the action and maybe even try driving yourself! Check back soon for another article highlighting all of our 2010 Redline Time Attack East champions!