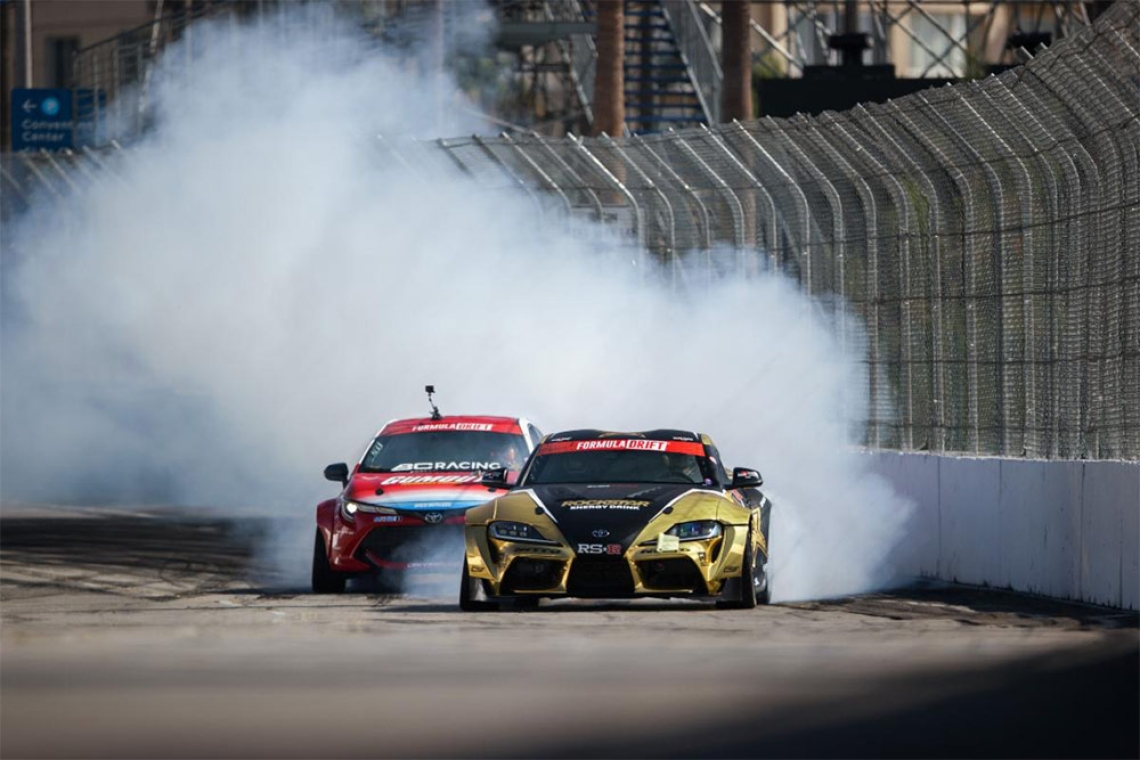 IRWINDALE, California (October 21, 2021) – The Papadakis Racing Toyota team is heading to Irwindale Speedway this Friday and Saturday for the Formula Drift season finale.

Driver Fredric Aasbo leads a close battle at the top of the championship points in the Rockstar Energy Toyota GR Supra, while Ryan Tuerck is sixth and remains an outside contender for the title in the Gumout / Nitto Tire / Mobil 1 Toyota Corolla Hatchback.

“Irwindale is a hugely challenging track with some of the biggest commitment from drivers and highest speeds of the season,” said Aasbo. “That’s why we all love it so much and I can’t wait to get back out there this weekend.”

The venue, where the first professional drifting event took place in the United States back in 2003, is the spiritual home of the sport, often referred to as "The House of Drift." It never fails to deliver close competition. Aasbo scored his first Irwindale win in 2015 on the road to championship victory and hopes to return to the top step of the podium again this weekend.

The pressure is on. With just 20 points between the top three drivers in the title fight, Aasbo will need to run the ladder all the way to the final battle to lock in the championship. He must score second-place or better to guarantee the championship over closest challengers Chelsea DeNofa and Matt Field. Aasbo has earned a spot in the final battle three times since he first competed at Irwindale Speedway in 2010.

Manufacturer partner Toyota leads the Auto Cup, while partner Nitto Tire tops the Tire Cup rankings. To guarantee a victory for Toyota and Nitto, the team is gunning for a one-two finish. Aasbo and Tuerck last celebrated together on the top of the podium at Round 6 in St. Louis.

So far this season, Aasbo and Tuerck have scored a combined seven podium results in seven rounds of competition.

This weekend begins with qualifying on Friday, starting at 7:30 p.m. Competition starts Saturday with opening ceremonies at 5:30 p.m. and runs into the night with podium celebrations scheduled for 10 p.m.

Aasbo joined Papadakis Racing in 2011 and earned the series crown in 2015. He started his Formula Drift career in 2010 as a privateer in a Mark IV Supra.

Tuerck is a leading social influencer and top-tier driver. His down-home charm, commitment to the sport's grassroots, and talent in front of the camera have brought him a social fanbase of over a million followers.

The Papadakis Racing team began drifting in 2004 and is the most winning team in Formula Drift history. Aasbo has 16 career wins to date and one title (2015). The team also won back-to-back championships with driver Tanner Foust in 2007 and 2008.

Drifting is a high-skill, high-powered motorsport with an emphasis on car control. In the Formula Drift series, drivers compete in knockout heats on a closed course, sliding sideways in trials judged on speed and style. With origins in Japan the sport has rapidly grown to one of the most popular youth-oriented motorsports in the world. Here in the United States, Formula Drift events routinely host capacity crowds, while live streamed multi-platform broadcasts attract millions of online viewers.