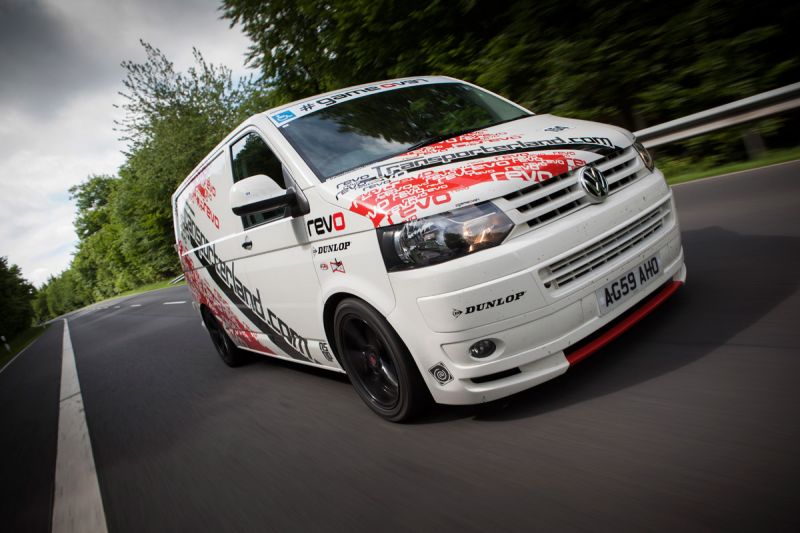 VW Group tuning expert Revo has set a new record for a commercial vehicle lap of the Nürburgring during a recent test session– smashing the world famous lap set by Sabine Schmitz in a Ford Transit van on the Top Gear TV Show.

As the world’s most demanding race track, the fabled Nurburgring offers more challenges - and kudos – than any other piece of motorsport real estate. The record set by Sabine, a highly impressive ‘Bridge to Gantry’ time of some 10 minutes and 8 seconds was felt by many – including the talented lady herself – to be about the most that a standard van could do.

This lead to the question, what could a lightly modified van, breathed on by Revo’s talented technicians, make the same lap in? The logical way to answer this was to pick a suitable base vehicle and find out. The excellent VW T5 2.0 Twin Turbo Diesel was chosen and supplied by Transporterland in Lydney, not only as one of the most capable commercial platforms and tuneable powertrains out there, but also because of its bomb-proof reliability and car-like dynamics. Having covered a hard 80,000 miles already, this particular van was also perfectly run-in! As able as the T5 is in standard trim however, the Revo team gave it even more of a fighting chance - with the addition of a bespoke ECU remap, Milltek ‘turbo-back’ exhaust system and a Forge intercooler/oil cooler combination. This was enough to take the engine to an impressive – and useful - 220bhp and with a very healthy rise in torque. More than many contemporary hot hatches!

Chassis duties were taken care of with a simple addition of BILSTEIN’s well-proven B14 coilover kit, a quartet of lightweight Team Dynamics wheels and a set of sticky, but fully road legal, Direzza boots from Revo’s tyre partner, Dunlop. With this lot fitted, the ethos was simple; drive it the 580 miles to The Ring, complete with all of the crew’s kit and gear in the back, drive around the track as fast as possible, and then drive all the way home again. No trailers, no back-up plans, no contingencies. Just a simple proving exercise of the concept in a real-world situation. Despite driving hard on track, the intelligent tuning and thoughtful engine mapping ensured that fuel economy during the trip under normal driving conditions remained exceptional.

As Top Gear had equipped themselves with one ‘Ring legend, Revo decided to do likewise, drafting in seasoned Nordschleife veteran Dale Lomas for driving duties. In between a hectic life as Rent4Ring sales supremo, driving instructor and the brains behind the cult ‘Bridge To Gantry’ Ring website, Dale managed to find a few minutes to don his fireproofs and hustle the T5 around for a few laps. Just like Top Gear, the team didn’t have the luxury of an empty track, instead sharing the tarmac with the lucky guests of the recent Destination Nurburgring track day.

After just a couple of laps to find his feet, and clearly enjoying himself, Dale took the T5 by the scruff of the neck and managed to complete a FULL lap in just 9mins:57.36 seconds – a feat that was revealed and ratified by the onboard GPS Racelogic software reviewed after the run. The full circuit is around a mile longer than the ‘Bridge to Gantry’ lap time set by Sabine’s run in the Transit for Top Gear, making Revo’s new record breaking time seem all the more impressive..

Still visibly amused after his flying laps, Dale commented, ‘I have been asked to drive many vehicles around the Ring, but I have to say, Revo’s request to pedal their van was one of the more leftfield and exciting. The thing is an absolute hoot, and surprisingly nimble and compliant. It’s all a bit of fun really, but I’m delighted that we managed a full lap of the Nordschleife in under 10 minutes. I’d love to see what we could do on a clear track!’

STaSIS Revo Group President James Leng added, ‘Dale’s right, this is one of our more ‘tongue-in-cheek’ engineering exercises, but we are trying to prove a serious point – and that is that our ECU conversions, and the select performance hardware components that we fit in conjunction with our technical partners, are more than up to the job of whatever you ask them to do. Whether your T5 leads a hard life towing, as your delivery vehicle, or as your holiday home .. or whether you would like to go and scalp a couple of M5s for a giggle, we have the exact ECU remap and hardware package that you need, and without compromise on economy!’