The Mint Rush: A Show Truck With A Feminine Touch

When piecing together a show truck, it can almost be easier to build something that’s literally only that – a rolling show piece. Throw on some ridiculous wheels and tires, tear out the interior to pack it with the most obnoxious gear you can, then pack it on a trailer and you’re ready to show and go. That can be fine if the vehicle’s whole existence is just to garner gawks and show off the flashiest parts. For Arc Audio though, this year’s demo vehicle is different from almost everything they’ve done previously.

If you’re familiar with Arc’s usual show presence, you’ll know they serve a smorgasbord of show cars. They’ve tackled everything from hot rods and imports, to golf carts, motorcycles, and even BBQ grills! Something they haven’t touched on in a while is a well-built truck, a point that was brought up by Georgia Karabinis, daughter of Arc Audio’s owner Dimitrios Karabinis.

“Since Georgia was a much younger kid, she’s been going with us to a lot of shows where a large group of the guys we used to hangout with were into lifted trucks and that scene,” explains Fred Lynch, marketing, R&D, and everything else guy over at Arc. “Because she had so much fun attending shows and still had so many friends involved, that was the inspiration behind the build.” 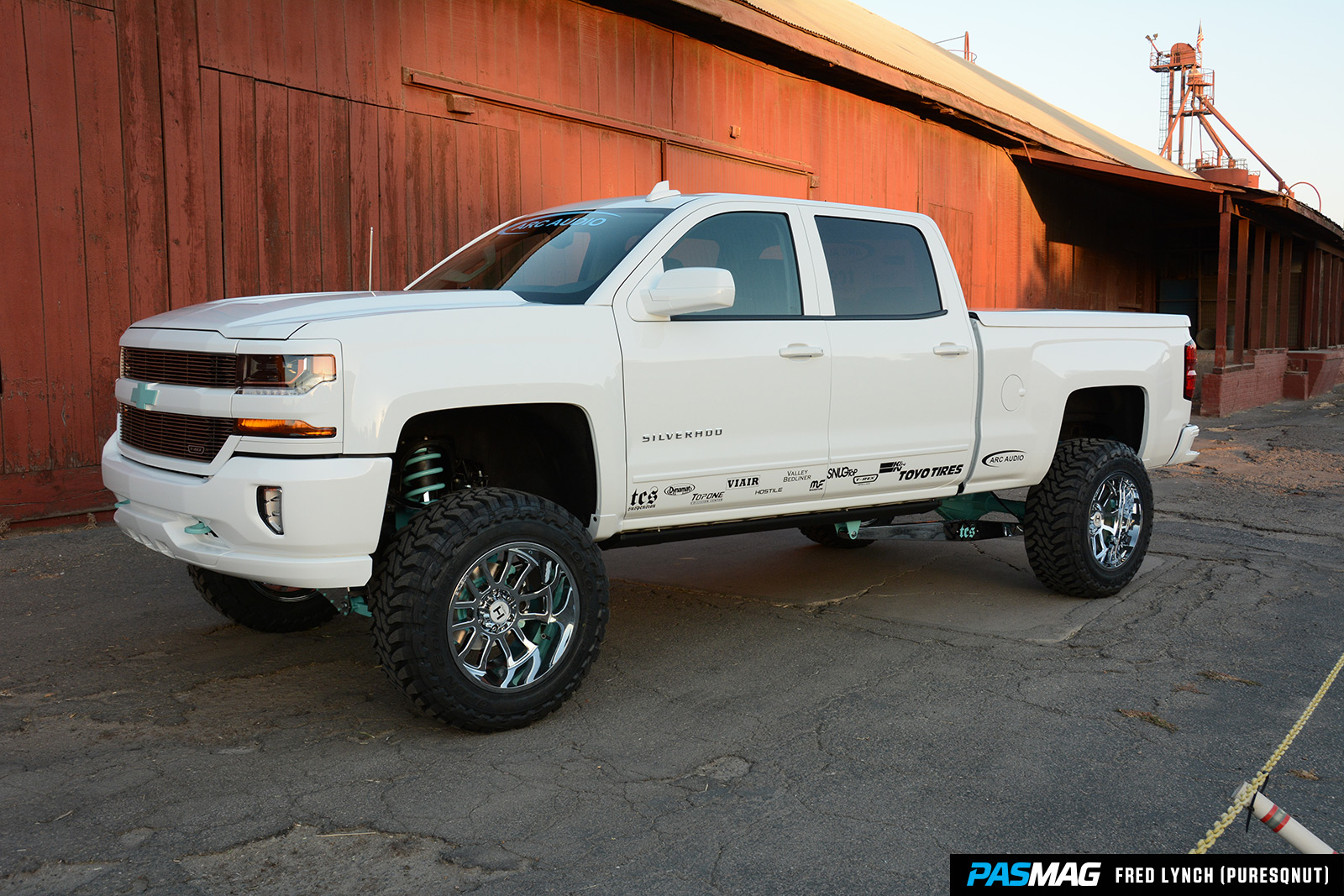 As Georgia was the driving force behind the build, she got her touch in here and there on the Chevy Silverado the team had chosen as their new platform. You’ll notice that the Chevy bowties, trailer hitch, and a good chunk of the suspension components are done up in a seafoam green that’s dangerously close to Tiffany’s blue – all Georgia’s idea. She also chose the height of the seven-inch lift from TCS Suspension, the 20x10 Hostile Gauntlet wheels, and the meaty 35/1250 Toyo Open Country tires. Inside, you’ll see a few personal touches from the installers, like the diamond on the under-seat enclosure with “Georgia K” machined into it, or the seafoam-green-colored ribbon pinned to the headliner. All fitting dedications for someone so passionate about the market.

Now that the truck was up to Georgia’s standards, it was time for ARC’s special project team (Fred Lynch, Brian Mitchell, and Brad Ott) to dive into the interior and really make this truck something special audio-wise. However, the goal with this Chevy was to make it a comfortable daily driver and not something unattainable to the average enthusiast, so with that in mind, the crack team of three utilized ARC’s catalogue of OEM integration and low-profile product to make the pickup sound fantastic without removing one ounce of convenience. 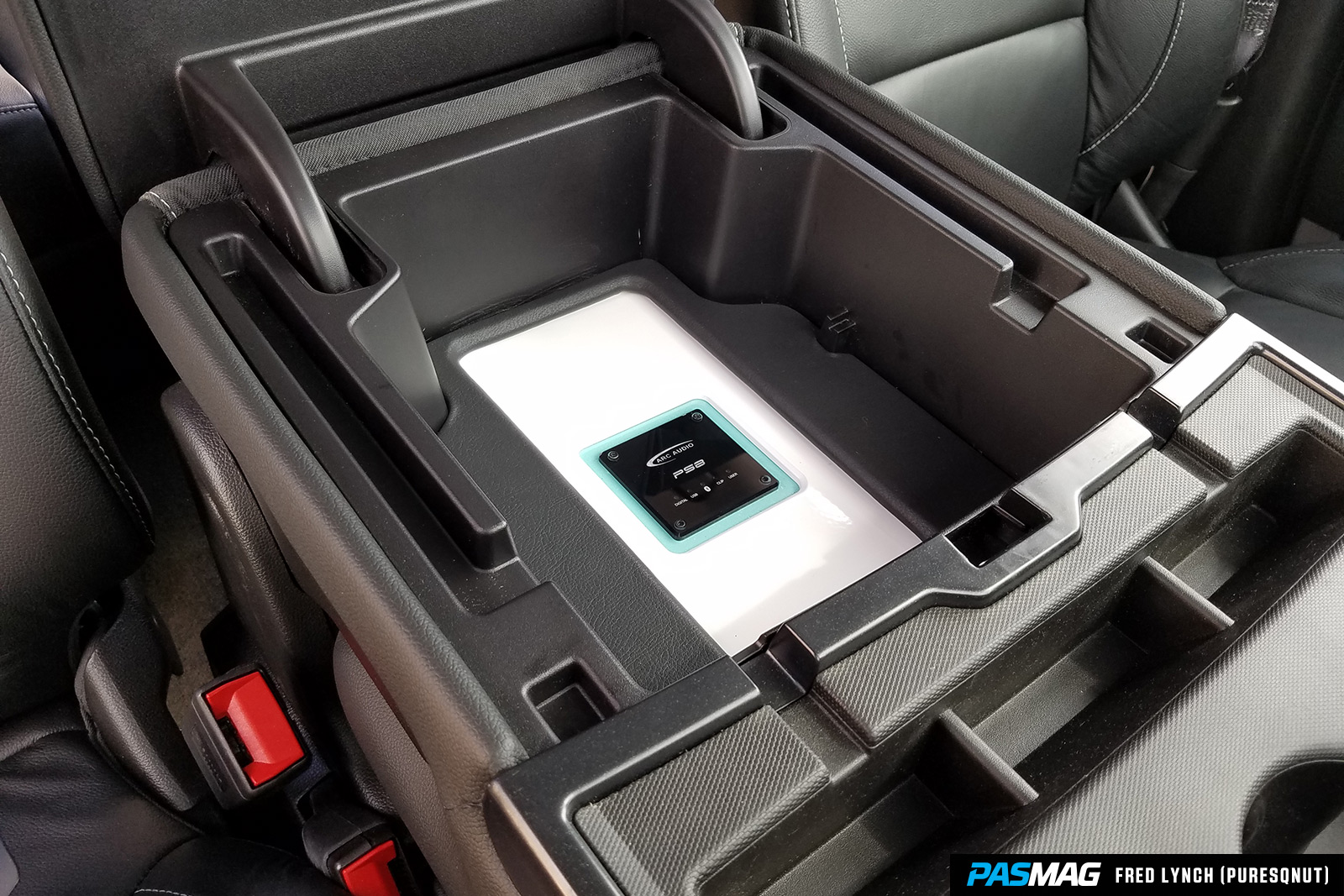 The system all starts with the mastermind: the PS8 processor. The PS8 is stealthily installed in the upper armrest of the center console, and sums the OEM source unit to work seamlessly with the rest of the ARC system. Customized by the PSC controller, the signal then travels to the XDi 1200.6 six-channel amplifier where it’s directed via the first four channels to two pairs of 6.5-inch coaxial speakers, Moto 692 in the front, and Moto 602 in the rear. The fifth and sixth channels are bridged to run the four ARC 8D2 subwoofers that line the custom hidden enclosure underneath the rear bench seat. With a total system wattage of 1,200 watts, each speaker receives 150 watts of power per channel, while the subs are handed a dose of 600 watts.

“With this being a functional truck and with the selection of products, we, for once, had to come up with a build that was realistic,” Lynch chuckles. “Instead of doing these completely wild, ironic, and crazy projects that have almost no road-worthiness and have to be trailered everywhere, why not have something that’s realistic and shows what our product can do with today’s newer vehicles?”

The result is a system that’s focused on sound quality and performance; the best of both worlds (which I’m assured still gets “stupid ass loud”). This is something further bolstered with the help of a couple really cool supporting products. One of which is a full sound deadening treatment courtesy of Dynamat (see sidebar). The other is a couple of ARC’s NGMs (Noise Gate Modules), which eliminate any standing noise at zero volume or when switching between tracks. These NGMs are installed in line with the signal chain of the PS8 processor and integrate right into the system.

Fun Fact: the ARC Silverado was built up to be as you see it now in just five weeks! And when the dust settled, there was a truck that stood for a few new things for the team at ARC. The truck is a realistic and attainable example for enthusiasts, signifies ARC’s reemergence in the truck market, and now the Karabinis father and daughter team have a badass truck to show off at shows and meets together. All in all, ARC has built themselves a winner. 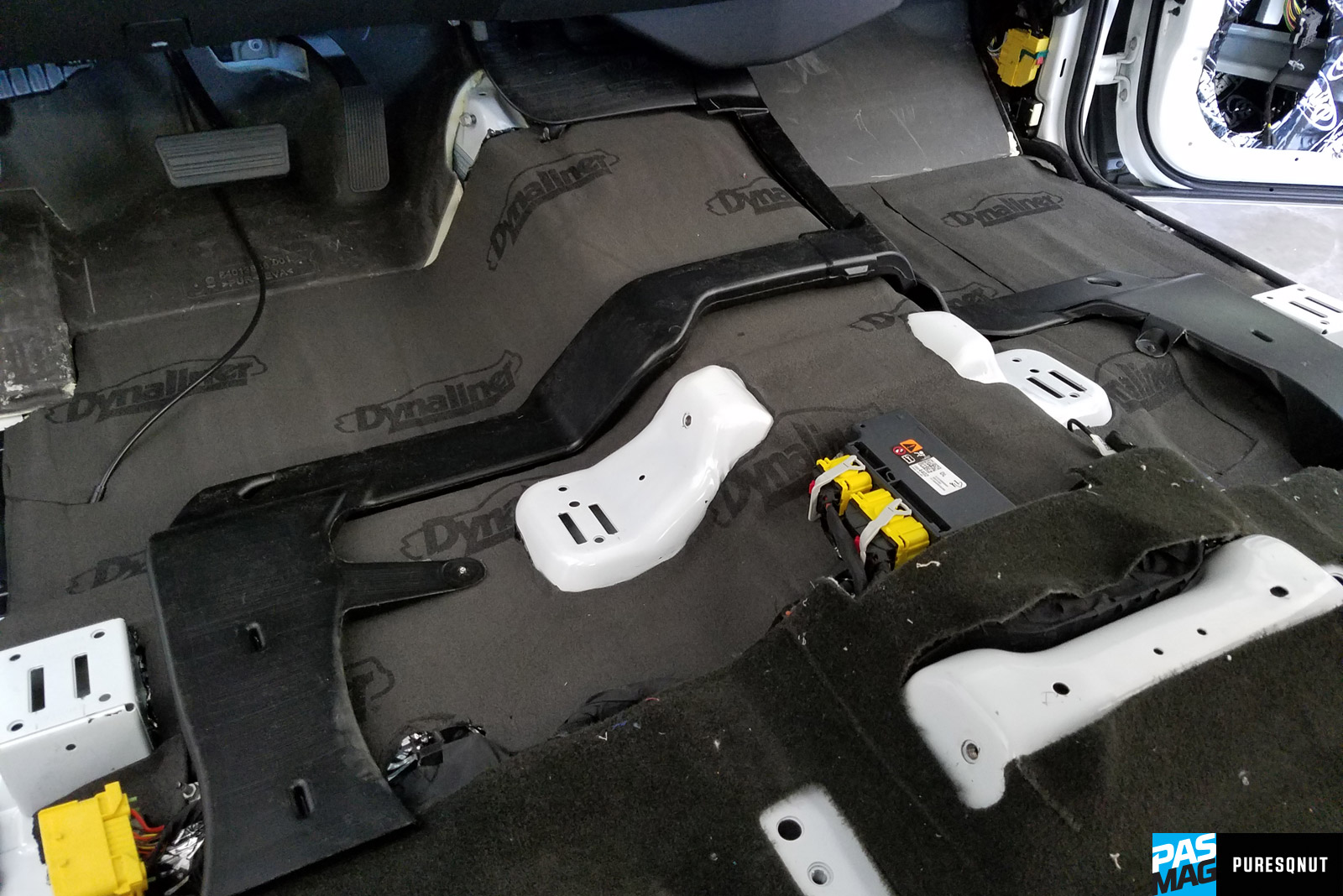 Setting the stage with Dynamat

The kind folks at Dyanmat hooked ARC up with all the materials needed to provide the quiet and isolated environment needed to make an audio system sound truly amazing. Here’s how it went down:

First off, the entire vehicle interior was stripped down. Every surface was cleaned and prepped according to Dynamat’s recommendations. 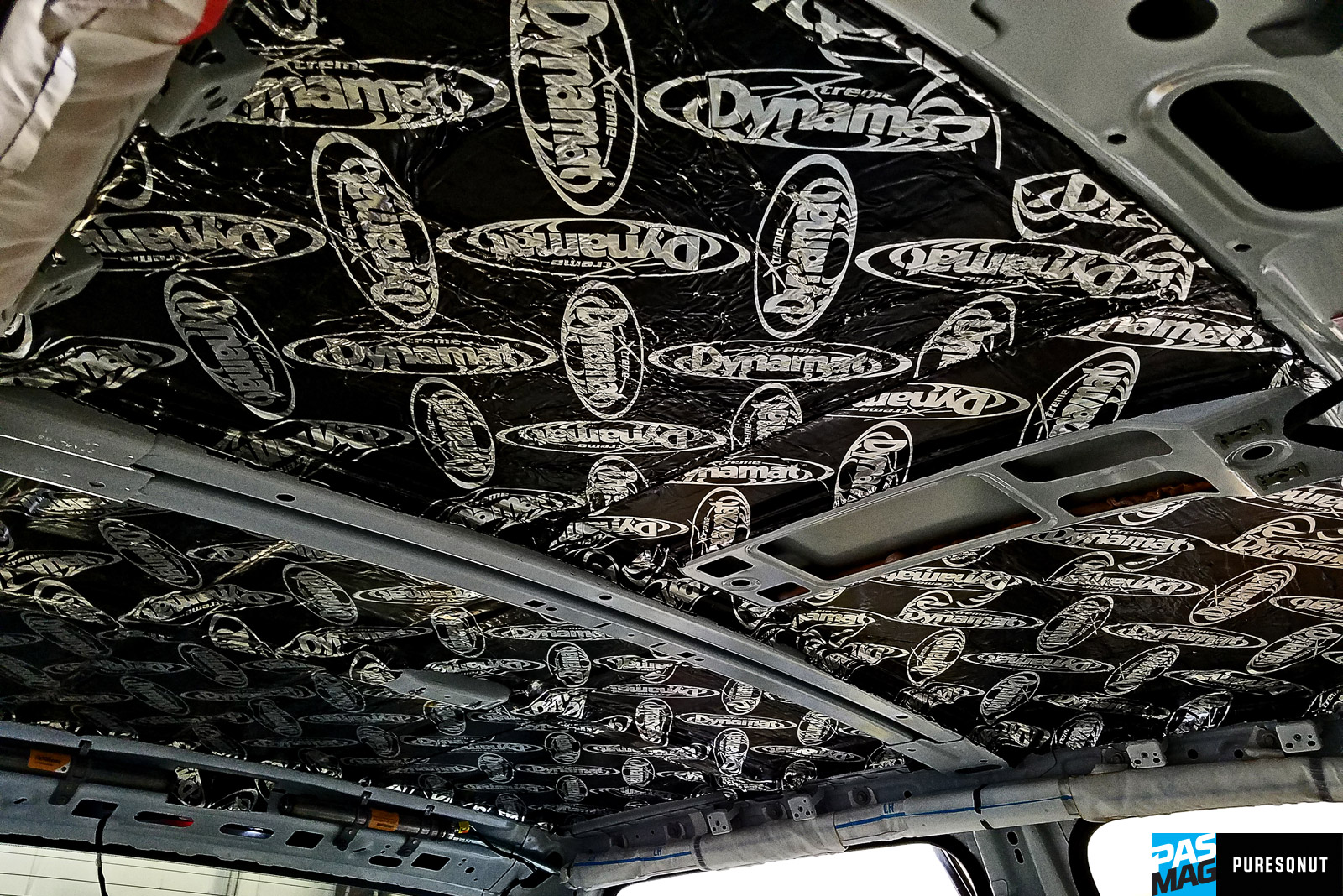 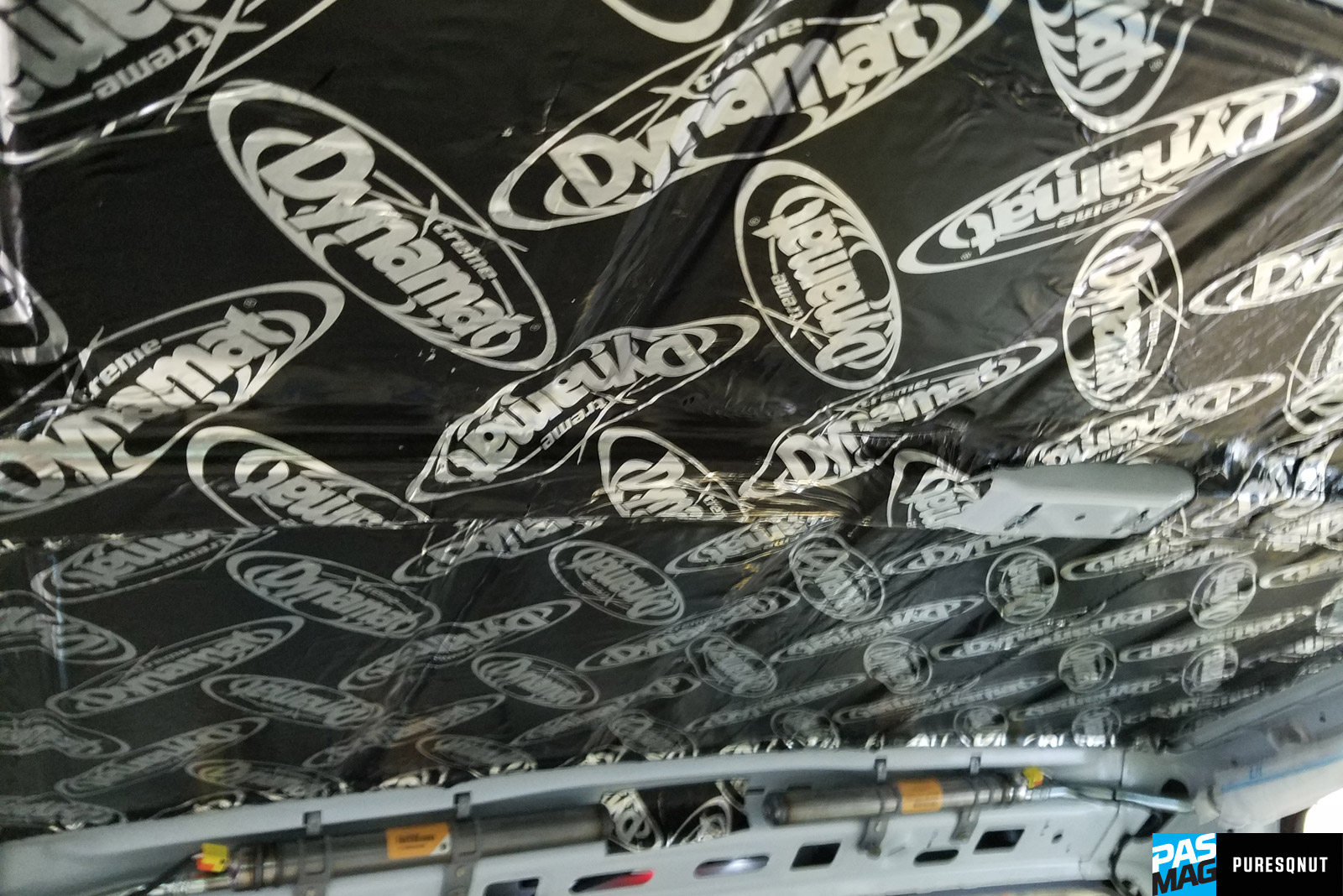 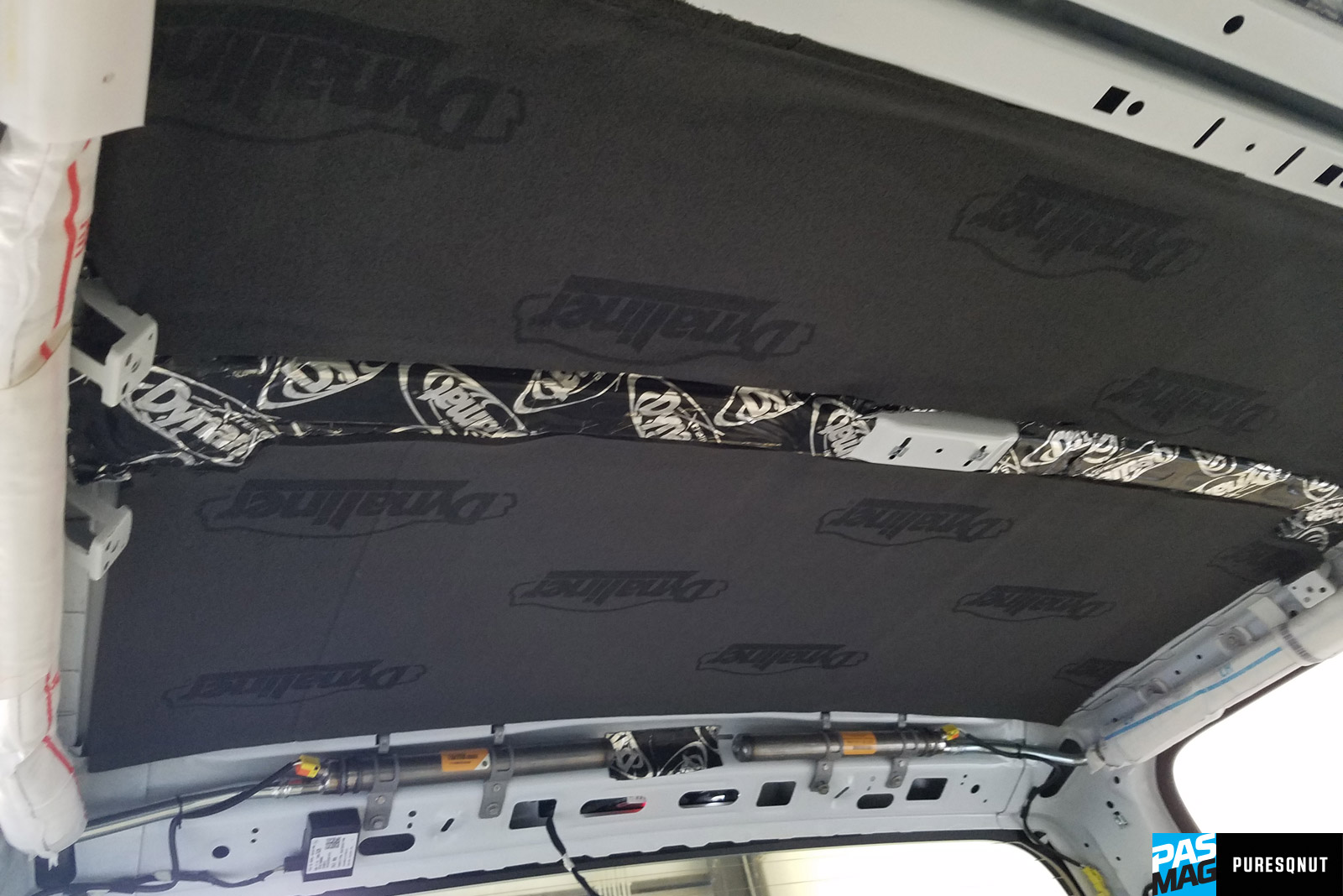 ROOF
The roof was covered with a single layer of Dynamat Extreme sound deadening material, followed by a quarter-inch sheet of Dynaliner. As the stock roof has zero sound deadening or insulation the material will help prevent rattles and help decrease road and wind noise. The Dynaliner further helps lower audible wind and road noise, as well as insulate the roof to reduce heat transferred during the summer and keep heat in during the winter. This is all part of helping create a better listening environment for the listener. 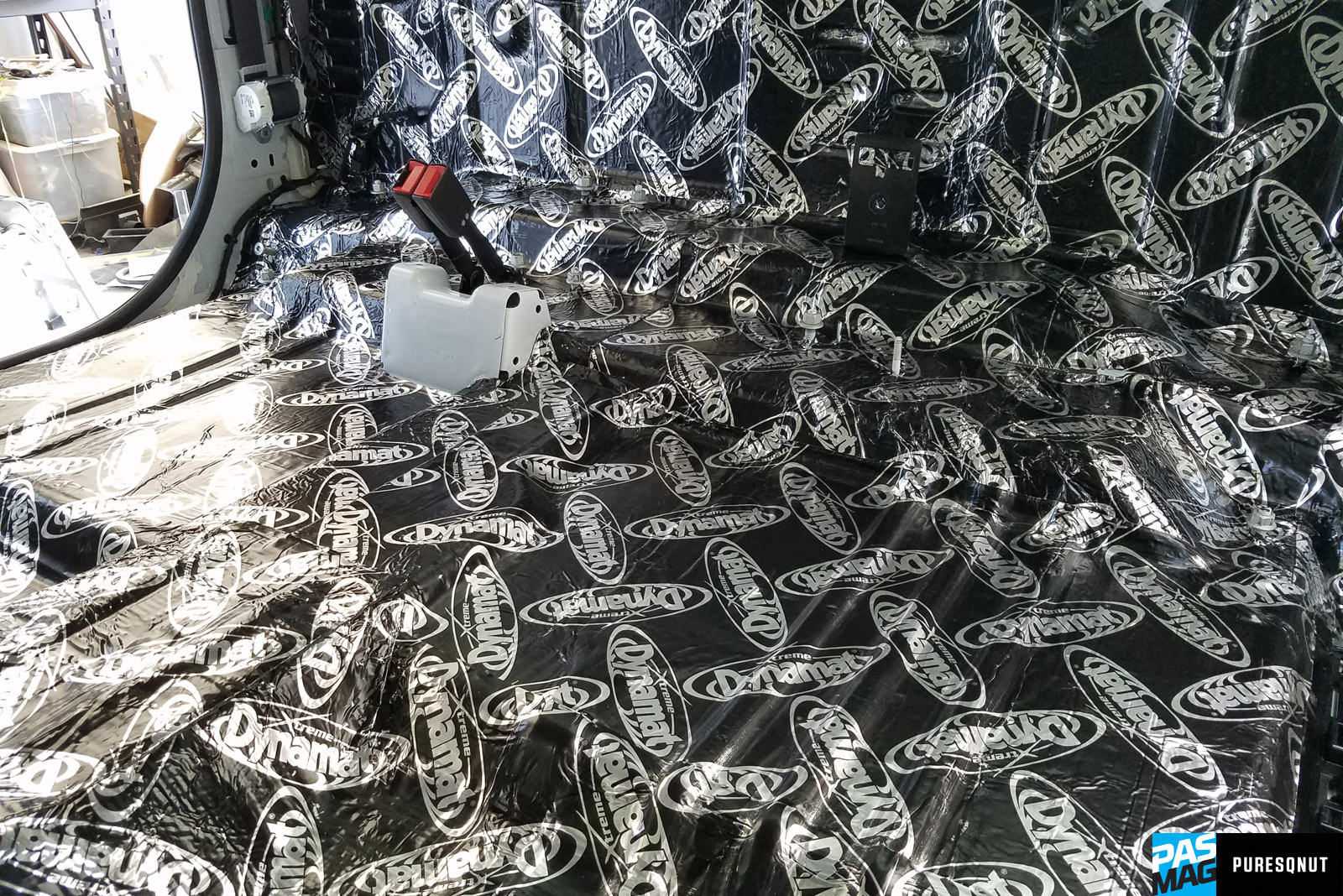 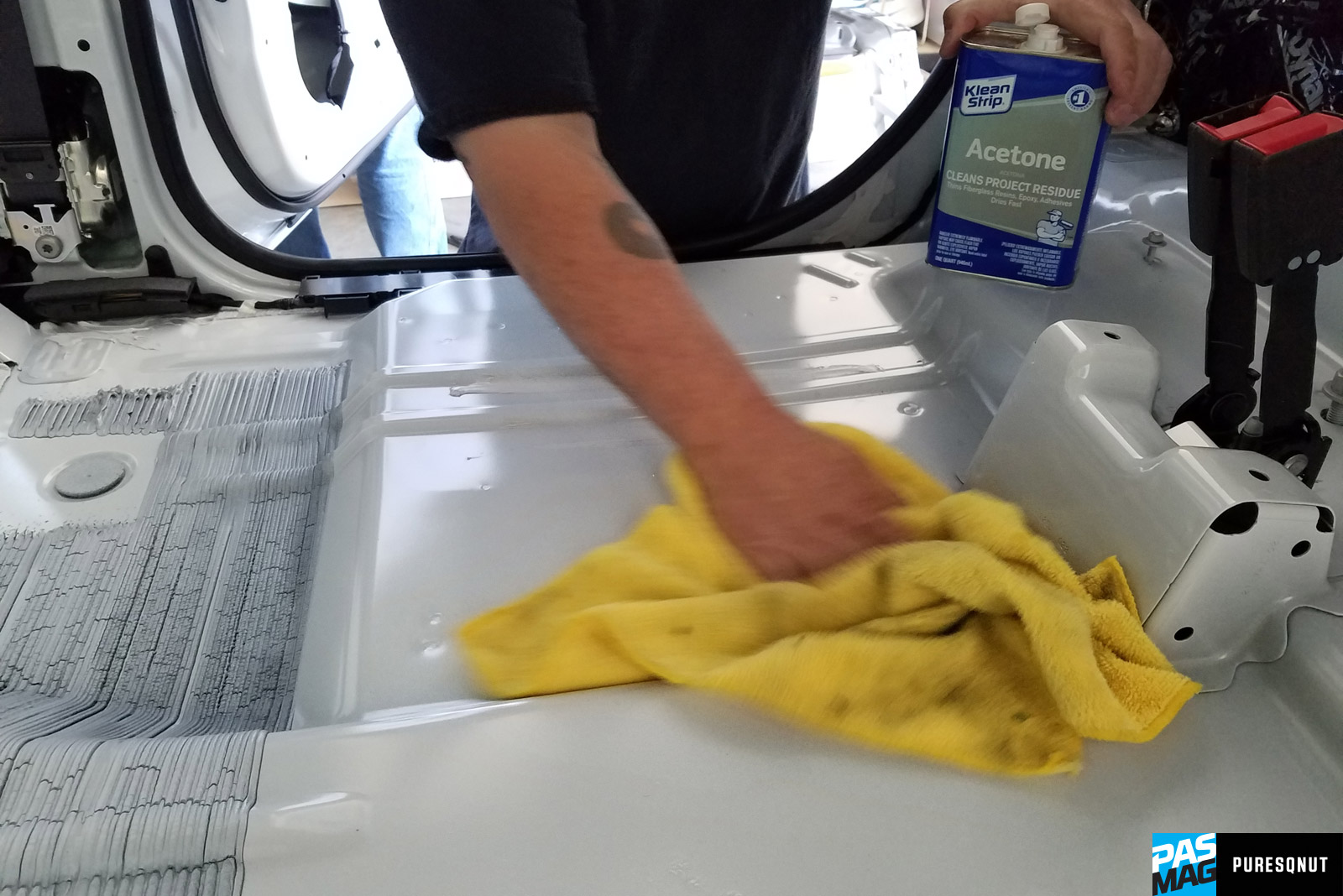 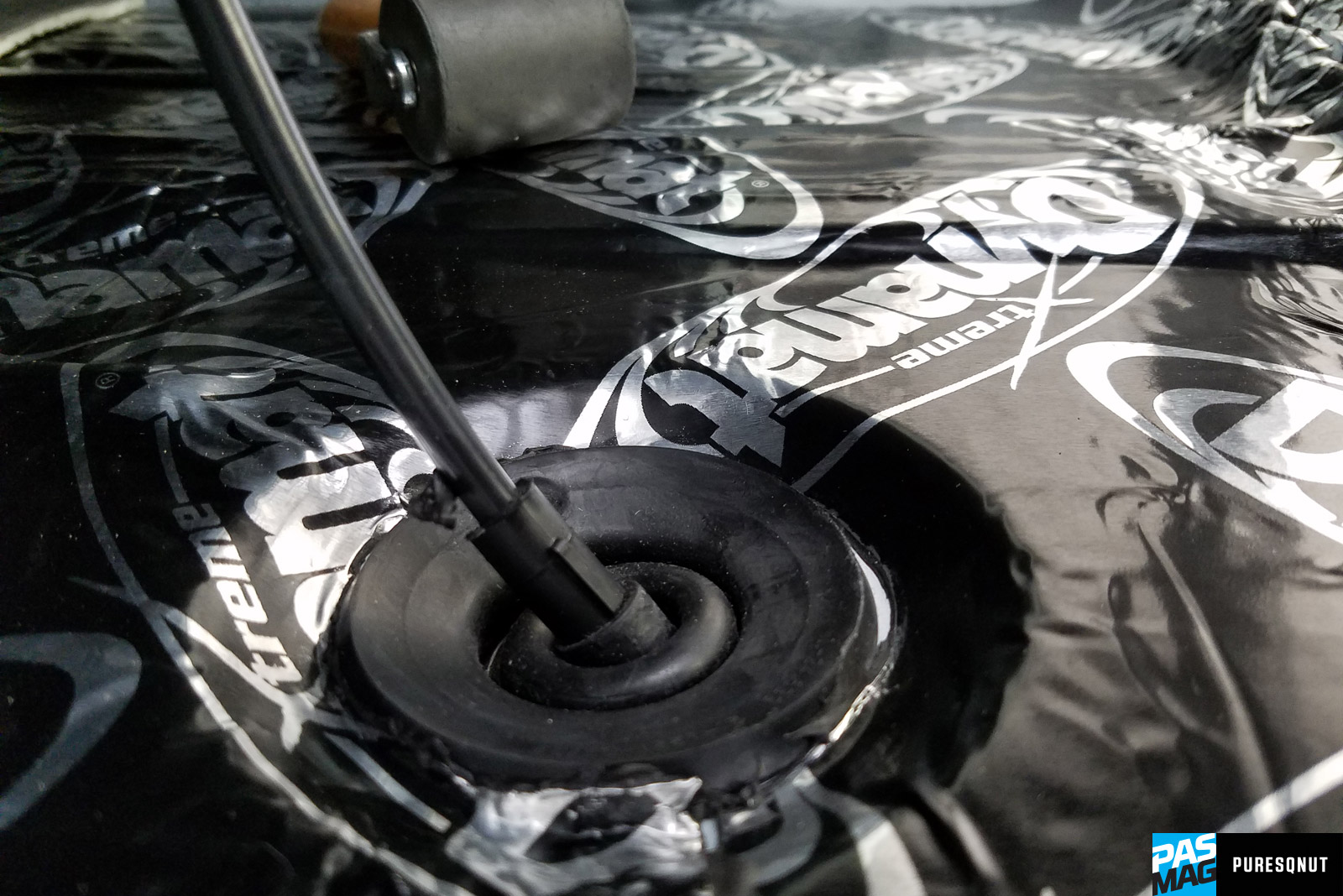 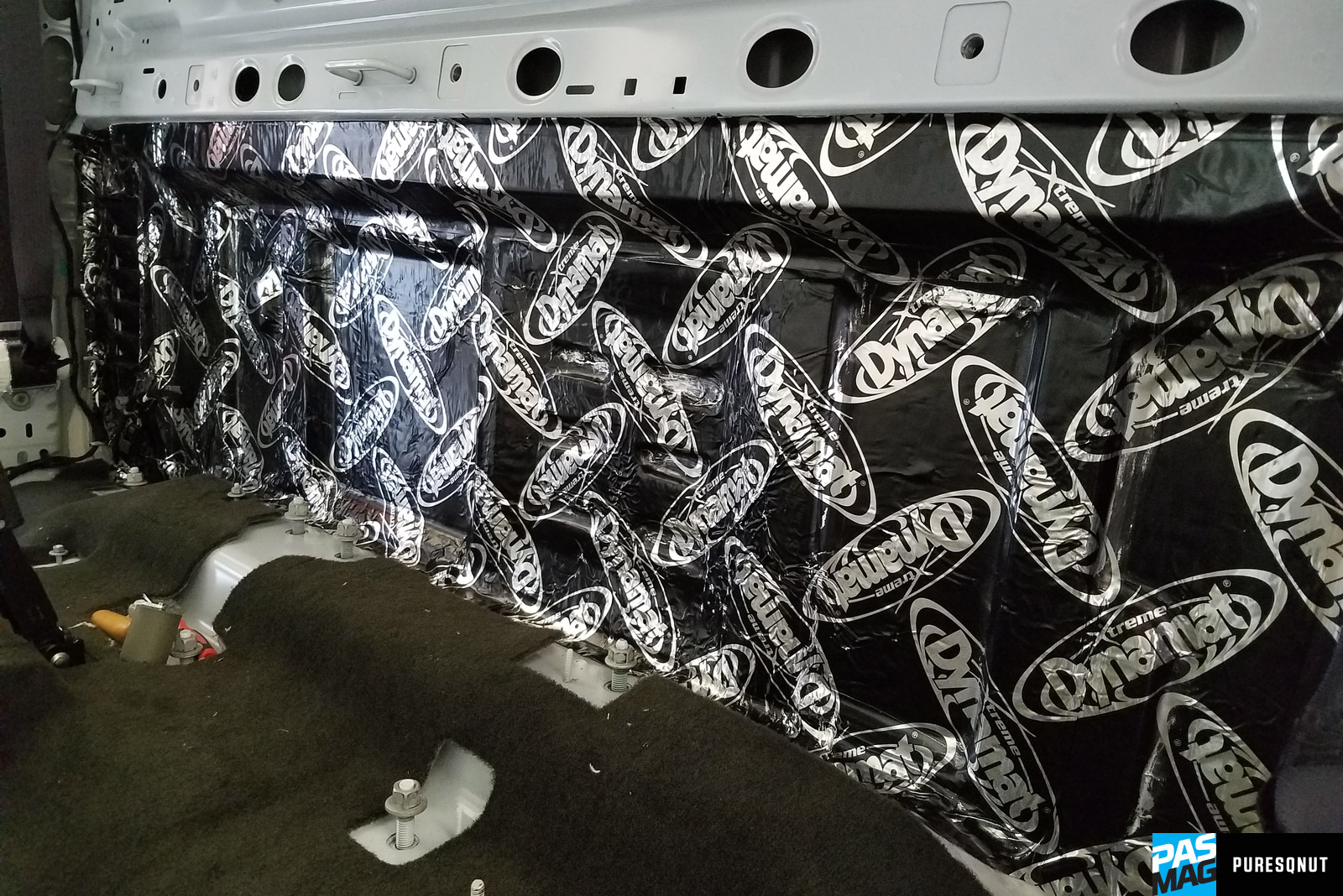 FLOOR & FIREWALL
The entire floor, rear wall and fire wall were covered with a single layer of Dyanamat Extreme. This was applied edge to edge of all the panels to minimize any unwanted floor panel or wall rattles, improving the listening environment. The entire area was then covered with a single layer of Dynaliner to help reduce road, exhaust and tire noise, as well as helping insulate the cab. 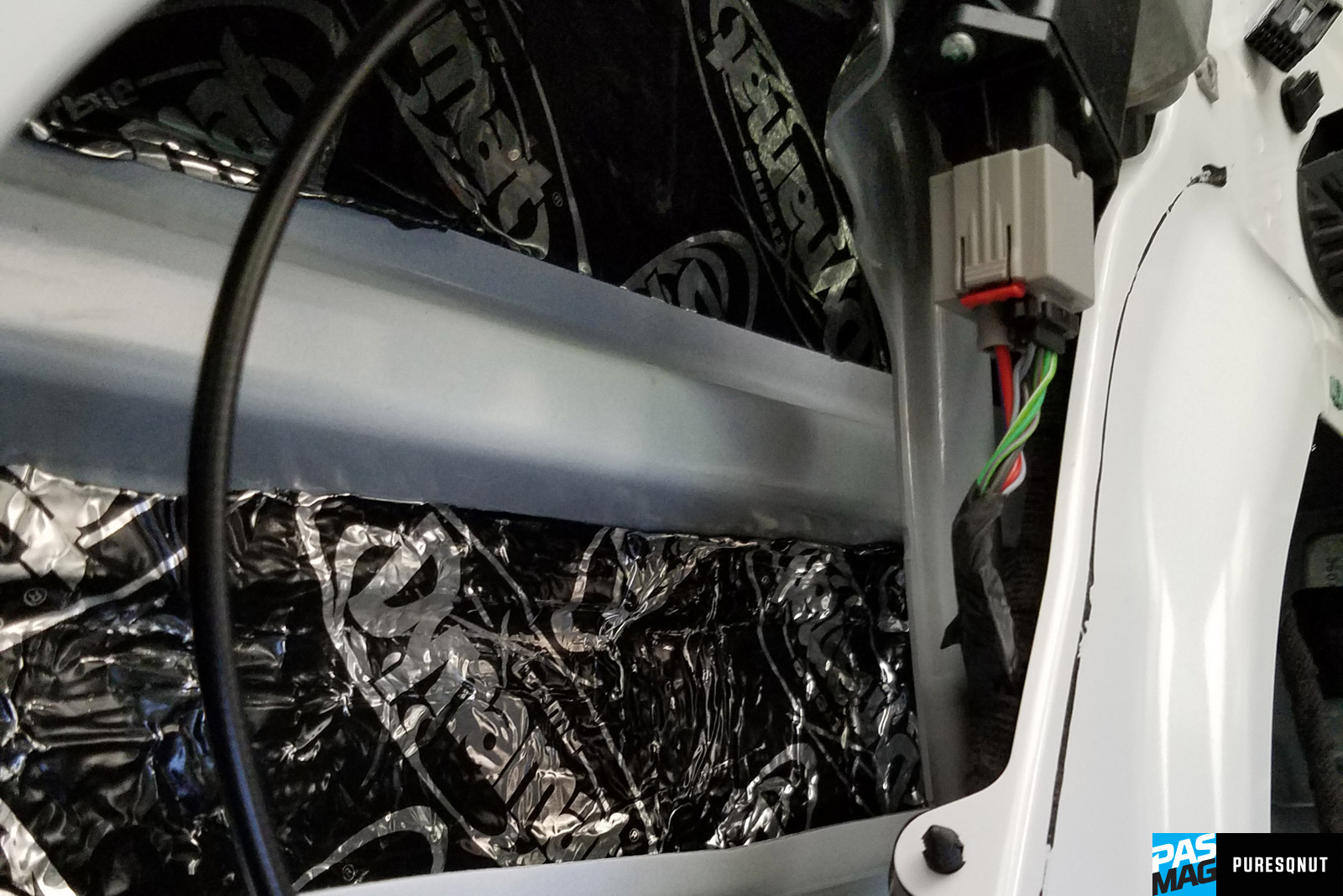 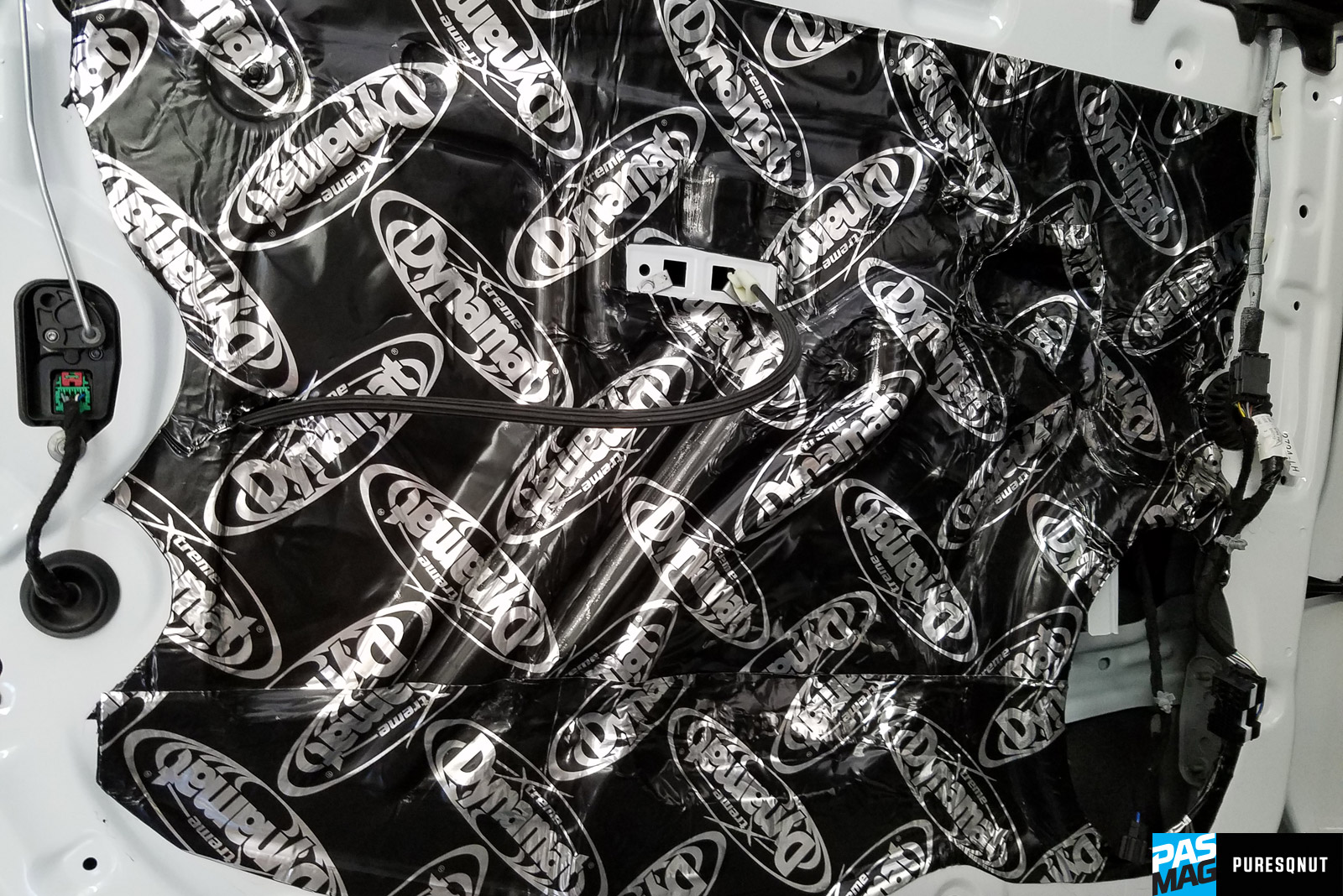 DOORS
As each door housed a speaker in use for this system there were multiple steps taken to assure the doors were properly deadened, providing an optimized acoustic environment for the speakers to play in.

The inside of the outer skin of the doors were covered in a solid sheet of Dynamat Extreme. Covering the panel this way helps create a solid outer panel to prevent back panel resonation to the speaker. The inside of the outer skin was then covered edge to edge in quarter-inch Dynaliner foam material, which reduces road noise and eliminates reflective back waves from the speakers. Without the Dynaliner here, it would ultimately turn the inside of the door into a resonance chamber, making the speakers sound honky and pitchy. This inner layer of foam greatly improves overall sound quality.

The next layer was the inner wall of the metal door (right behind the stock door panel). This panel had the stock rubber insulator insert removed from the door and all of the butyl adhesive removed and cleaned. The whole door was then prepped with Acetone and cleaned.

The entire middle door panel surface is covered with a single layer of Dynamat Extreme. This included covering up all of the access holes. This complete coverage creates a solid baffle for the speaker to be mounted to, increasing and improving low frequency performance and overall output. This also reduces any loss of information due to panel resonance. The entire panel was then covered with a single layer of Dynaliner for extra front wave reflection deadening and insulation.

The custom speaker mounting points are also covered with a layer of eighth-inch Dynaliner foam to reduce loss of energy through the speakers’ basket, helping improve overall output and frequency balance. #pasmag 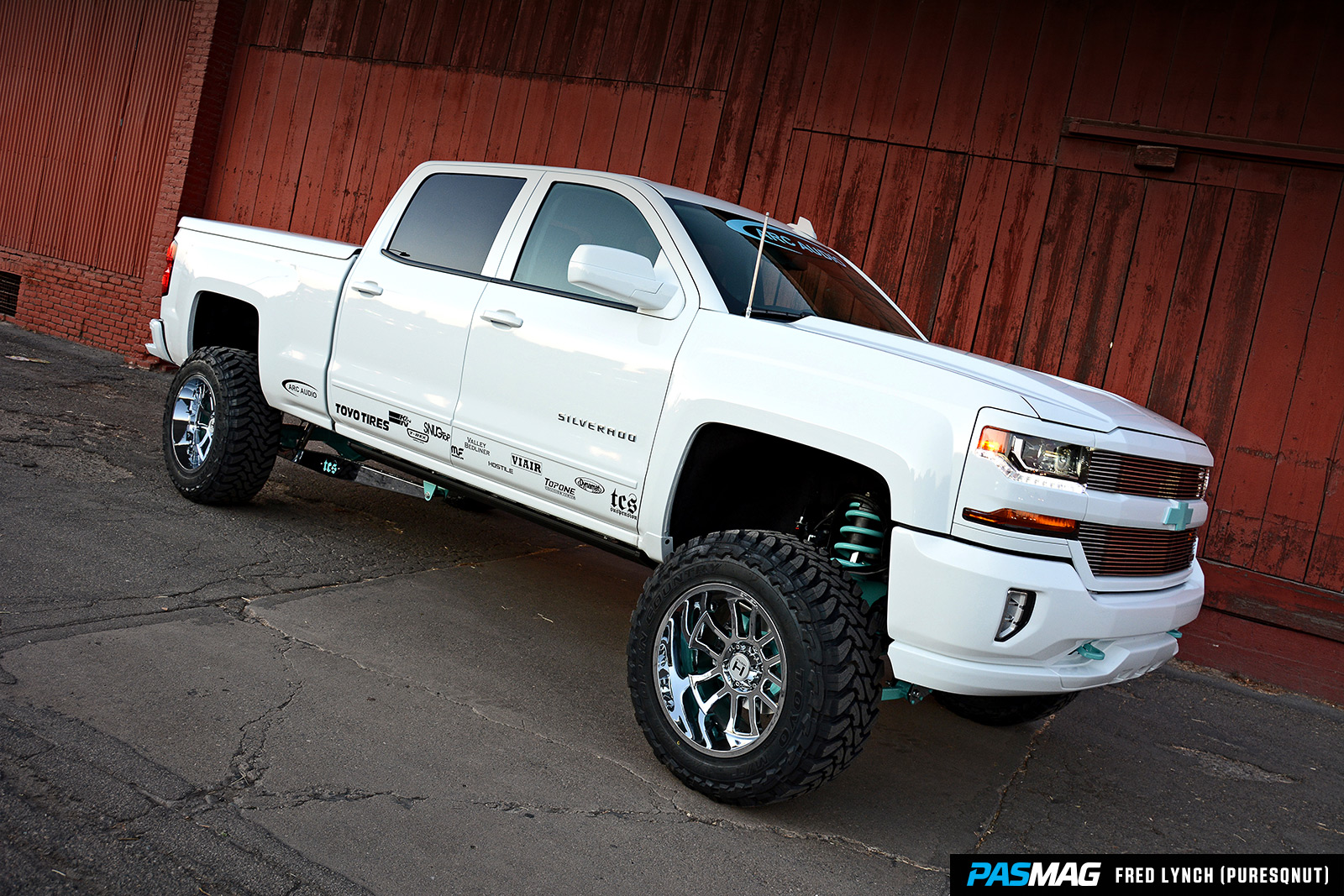