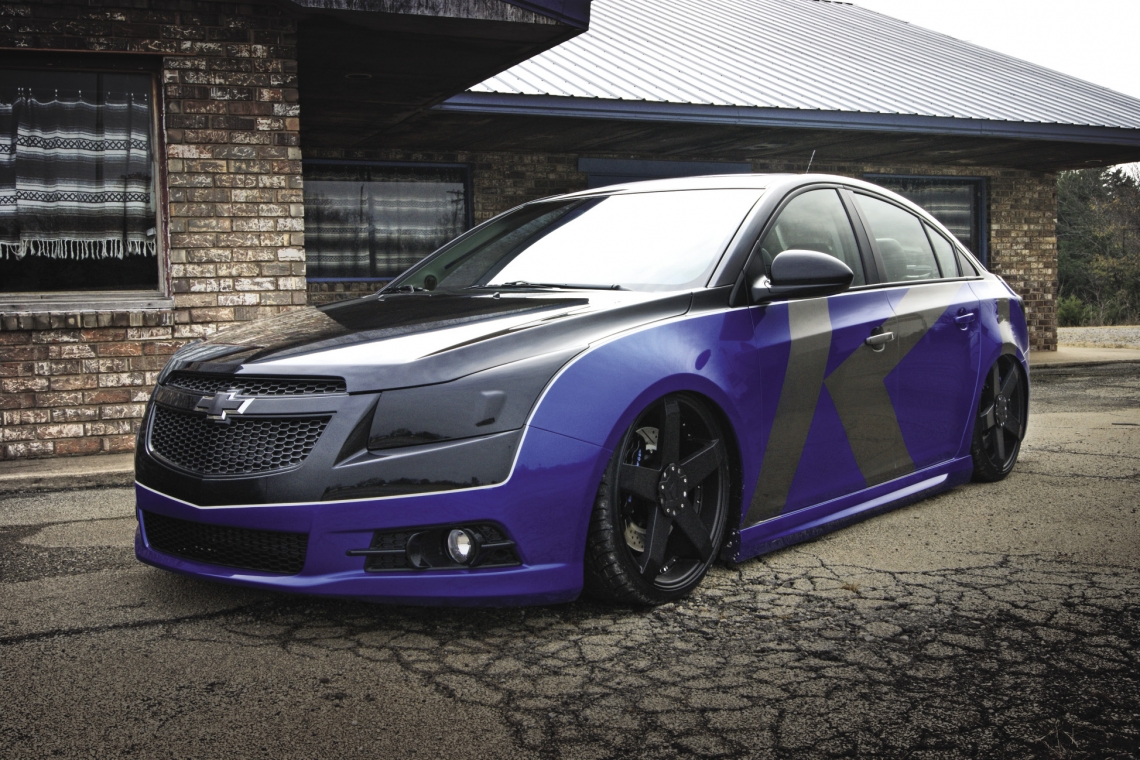 Over the years, PAS has featured several demo vehicles built by the Kicker Vehicle Design and Fabrication team. These include a Ford Fiesta, Scion xB, the amazing GMC Warhorse van and there have been plenty more, but let's get to the heart of this matter – the 2011 Chevrolet Cruze LTZ you see here.

Built to impress at the 2011 SEMA Show in Sin City, this Cruze embodies everything Kicker’s cars are known for – killer looks, a dope stance and a slamming system! The build began with the Kicker crew (Sean Murphy, David Adams, Josh Fletcher, Randy Botts and Tim Smith) completely gutting the interior in order to lay down some Dynamat Extreme sound deadening and run its Hyper-Flex power and XW speaker wiring through the car via XI series interconnects. 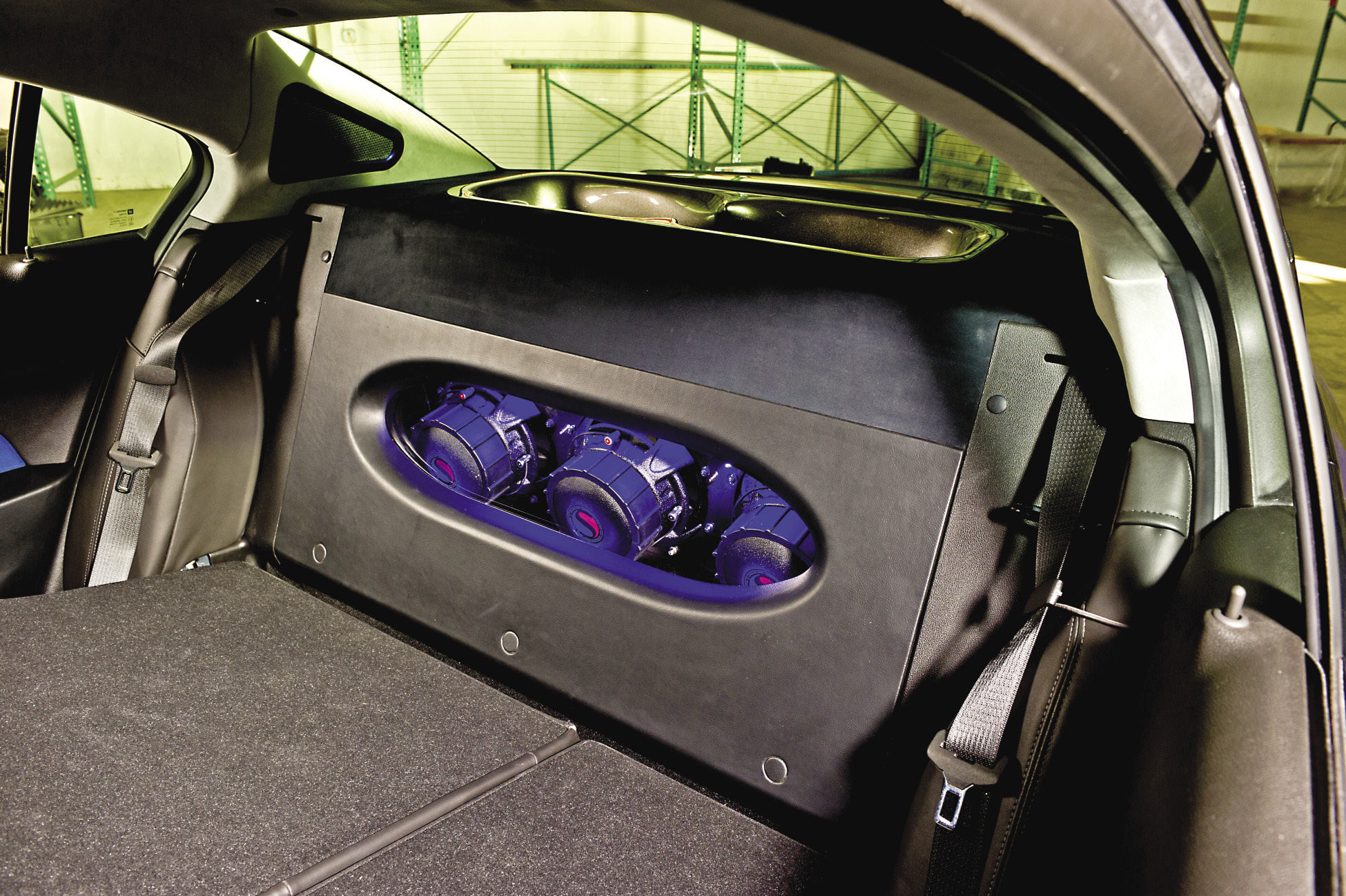 A large opening in the rear deck of the car lets the output of six Kicker Solo 10-inch Classic subwoofers breath deeply into the cabin. To get the fit and finish they wanted around the opening, the Kicker crew temporarily removed the car's rear window in order to be able to  properly fiberglass the top panel into place to perfection. A trim piece gives the opening a nice clean look. 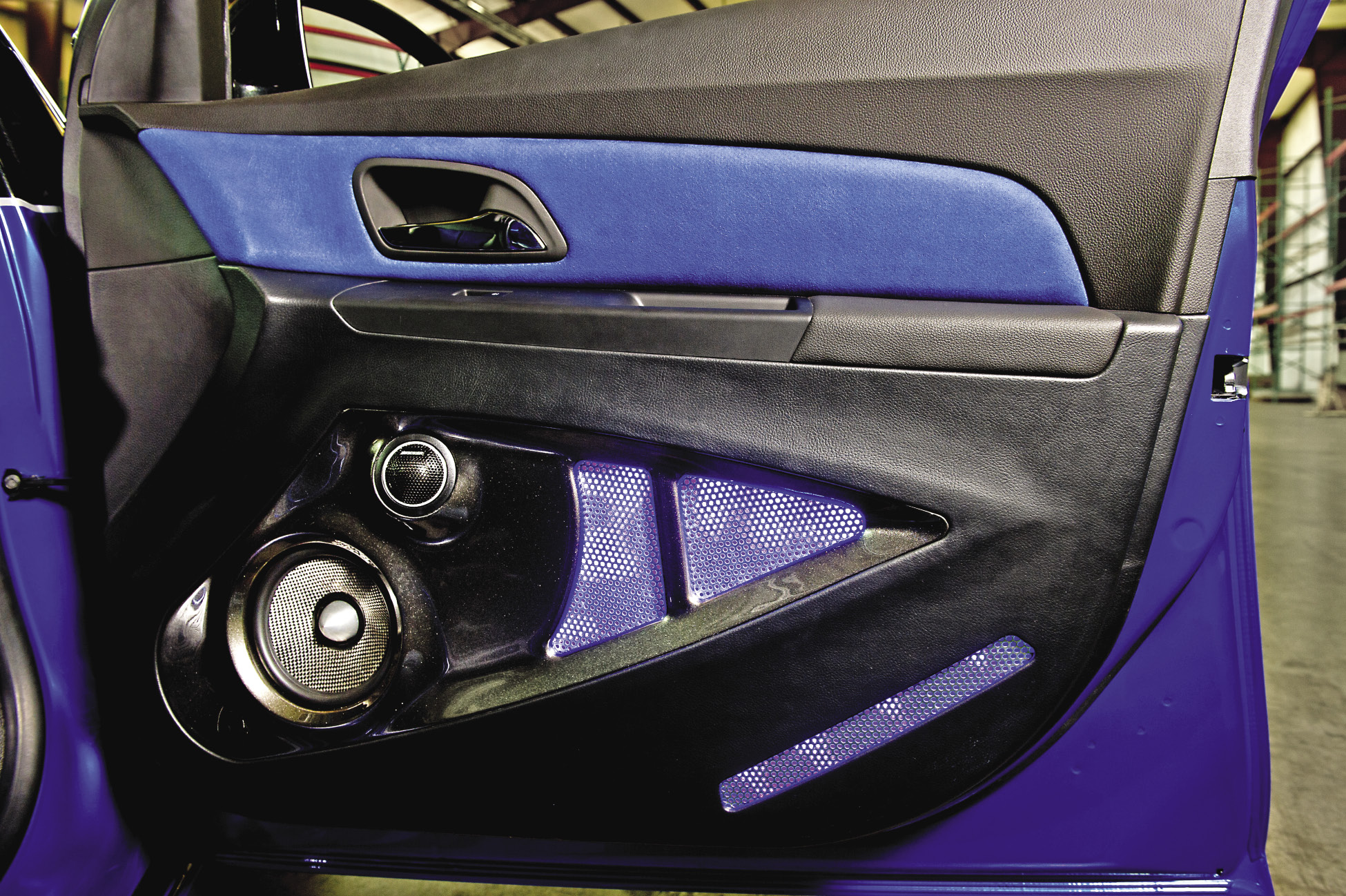 A large central section of the factory door panels has been cut away to make way for Kicker's QS65.2 6.5-inch components. The appropriately-angled midrange and tweeter are nestled into the custom painted metallic silver trim panel featuring back-lit mesh sections for some extra door bling. Another set of tweeters is mounted in the A-pillars. 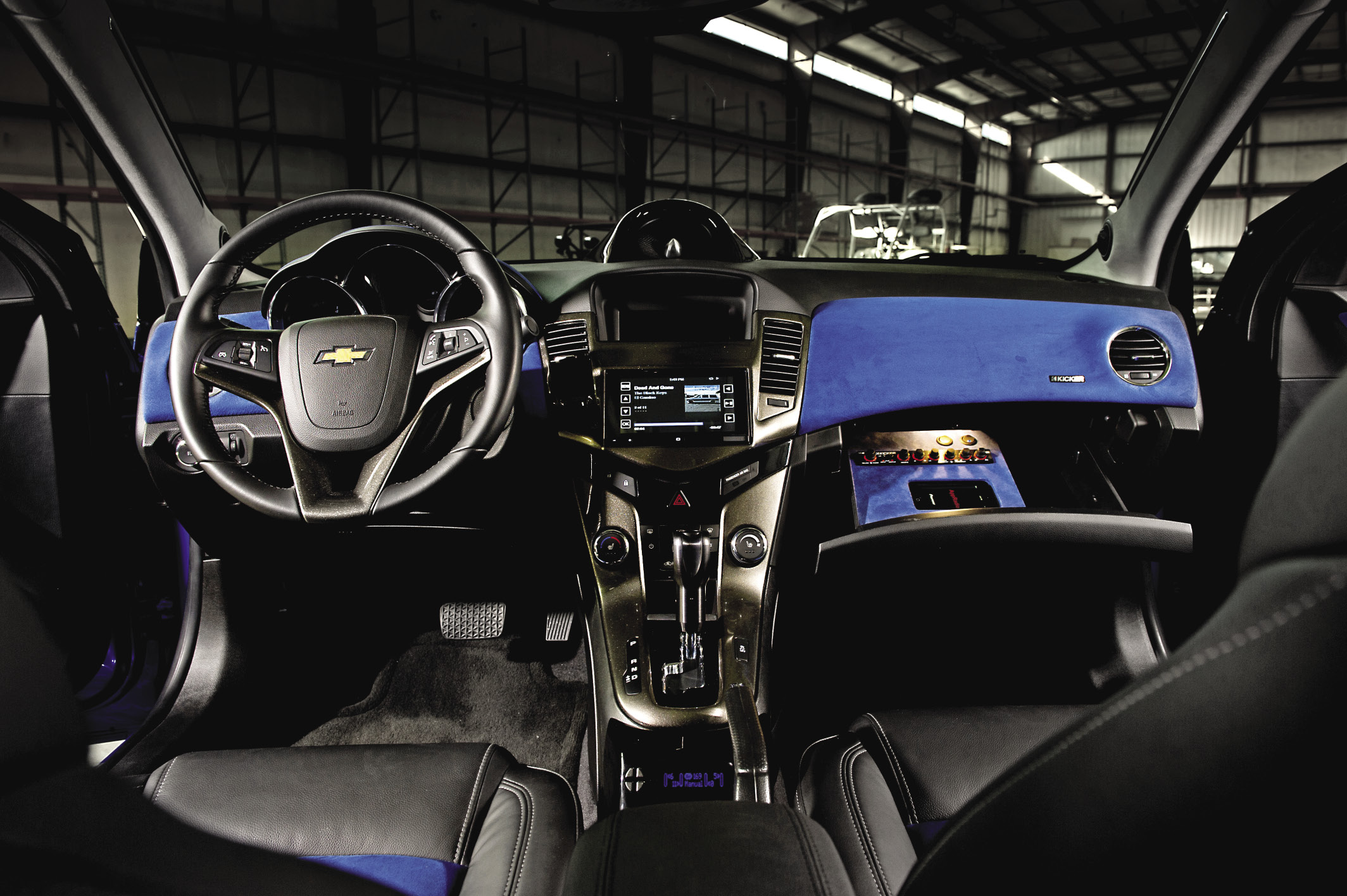 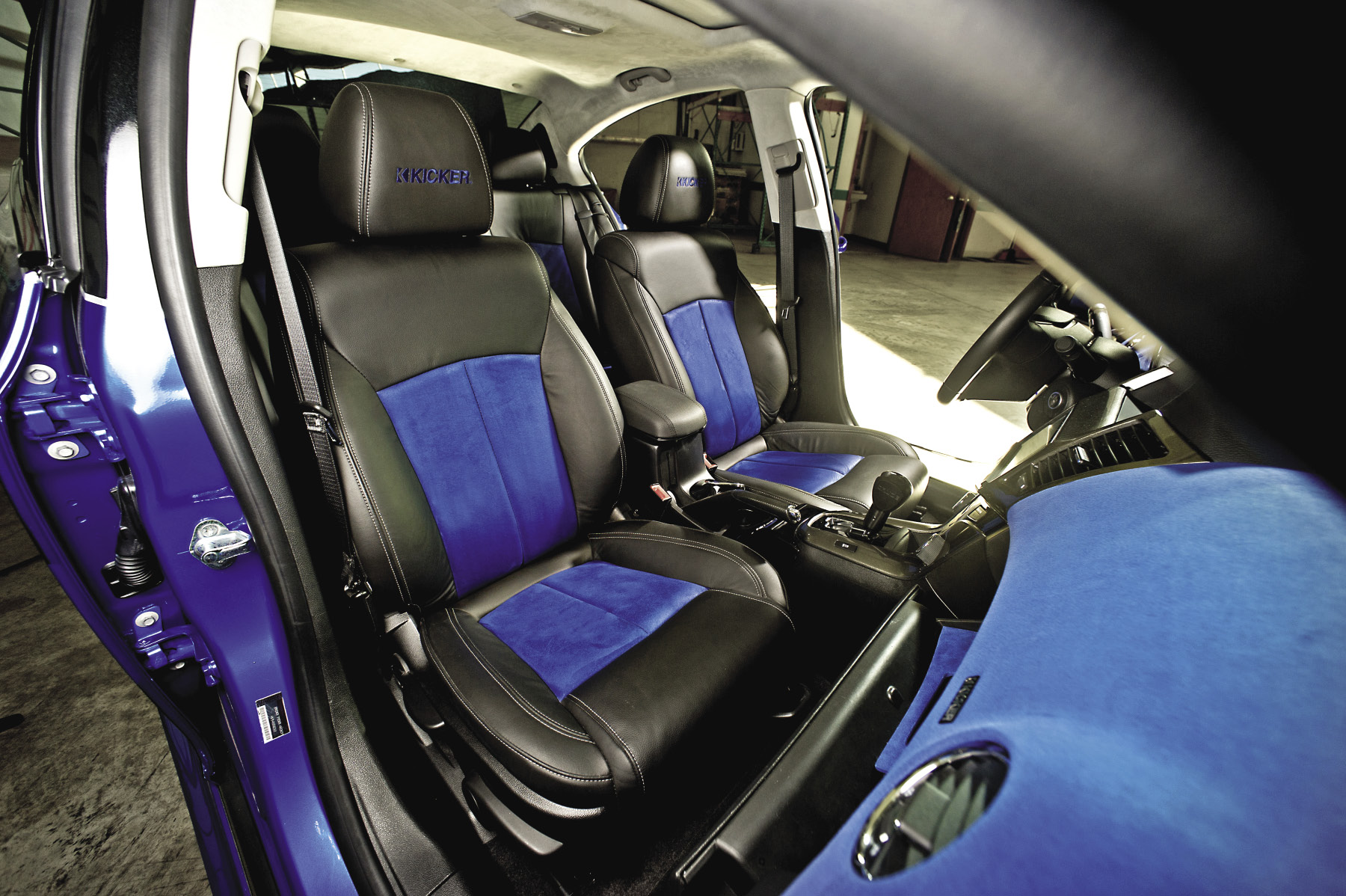 Stuffed with Kicker QS60.2 midranges, the team's custom built center channel speaker pod sits above a Pioneer SPH-DA01, which replaces the factory radio. Also known as the APPRADIO, this unit feeds a single signal down to a Kicker KQ5 preamp and equalizer that is permanently mounted in a custom panel inside the glove box along with an iPhone. 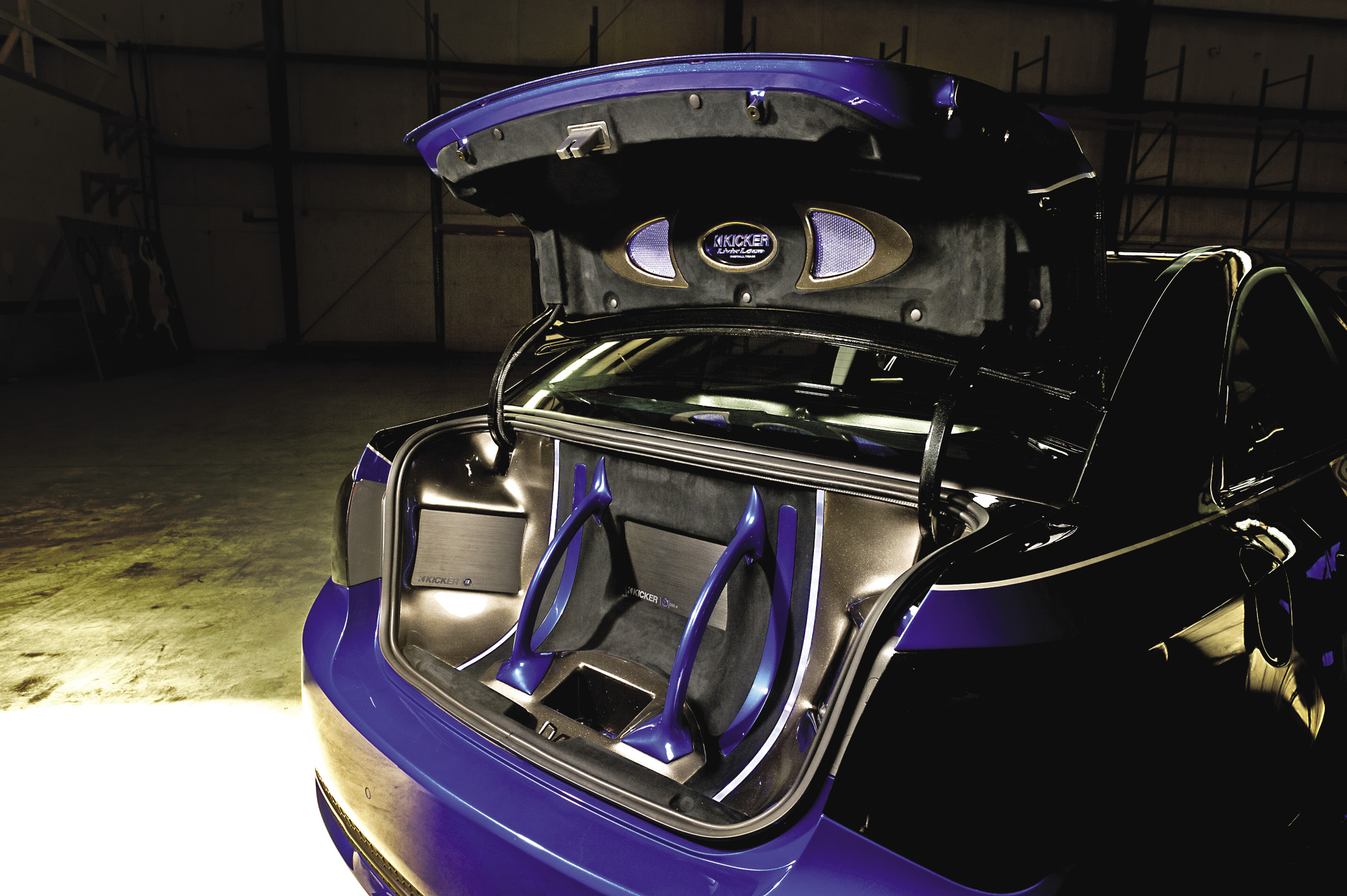 The trunk and trunk lid of the Cruze is trimmed in black Novasuede and home to more metallic silver trim panels and four Kicker amplifiers. Giving the install some dimension and style are two very cool vertical ribs that flank the center amp and match the body color perfectly. Powering the subwoofers, which are mounted inside the custom ported enclosure behind the amps, are three 1,000-watt Kicker IX1000.1 sub amps. A single IX500.4 provides jam to the front stage speakers. Mounted beneath the trunk floor and visible through a Plexiglas window is one of the Kinetik power cells that lets the system jam as hard as it does. 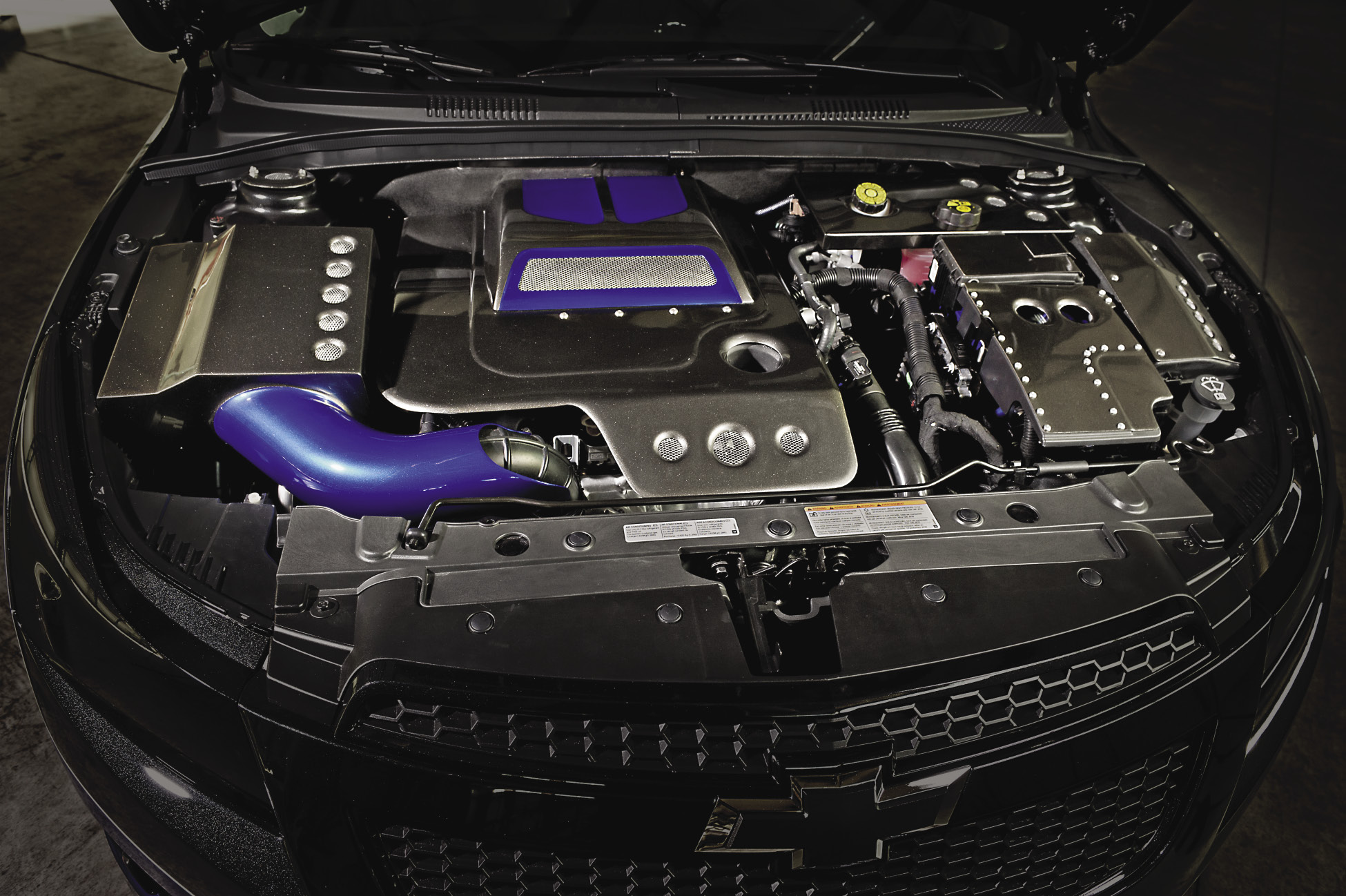 Distinct Customs helps finish off the interior with some new custom seat inserts and embroidery on the front head rests. Meanwhile, the Kicker crew is responsible for fabricating the new metal trim panels for the air box, engine cover and fuse box that are designed to give the engine compartment a futuristic look that flows with the subtle Geiger-like theme of the build.

The car rolls on 20-inch KMC Rockstars wheels sporting General Tires and an Air Lift suspension that drops frame to the ground. Blacked-out head and taillights blend into the two-tone paint scheme while accenting the vibrant blue body sides that incorporate a massive K on both sides for obvious reasons. Divine One Customs in Las Vegas gets credit for the paint.

The Kicker Vehicle Design and Fabrication team was rewarded for all of its hard work when General Motors presented the crew with a GM Design award for the ‘Best New Chevrolet Interior’ at the 2011 SEMA Show. It's a true testament to the team's capabilities. And, if you want to see some behind-the-scenes footage of the actual build, fire up your YouTube and head over to KickerFletch’s channel. Who knows? You might just get a sneak peak of what they are up to for this year’s SEMA. Whatever it might be, you know we’ll be there to check it out. 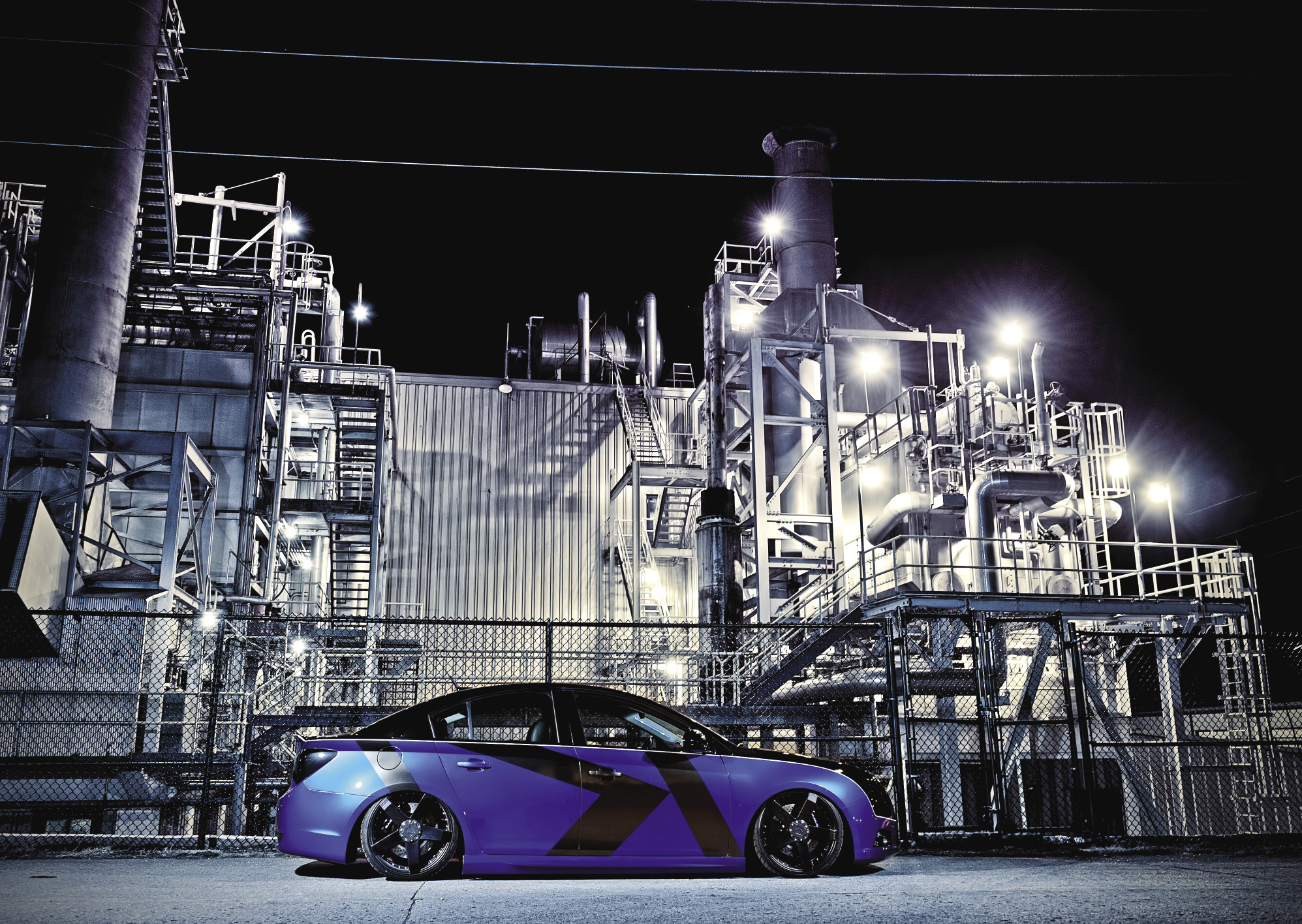