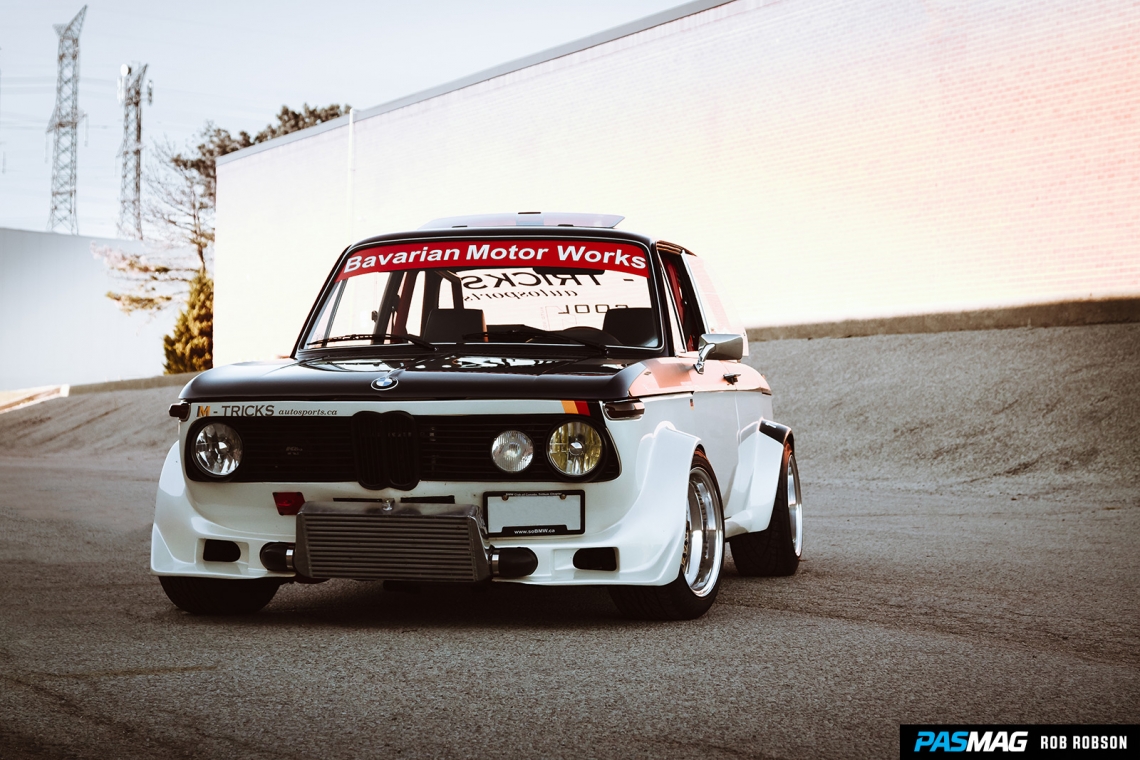 A One-Of-A-Kind Build Between Father And Son. In a social landscape that rewards quick builds and outward appearances, it can be hard to keep focus of what is really important when building something: yourself. When putting in your time and your money, at the end of the road, the outcome of that build should appeal to you. Building something that reflects your style and tastes has become a bit of a lost art in a time when doing something big, and doing something first is seen as the most “groundbreaking” to those in the “scene.” This is exactly why the BMW 2002 built by father and son, Tony and Ricardo Mendes, is something special that needs to be focused on.

Yes, the 2002 is beautiful and has some great attention to detail, but the story behind it, as well as the parts and ingenuity used to build this Bimmer are the absolute standout contributions to how this whole thing came together. It should definitely be mentioned that the timeline it took to create this BMW is 10 years. A full decade to get it dialed in to make it to the finish line. So, let’s start there, shall we? Ten years ago, Tony Mendes planted the seed by showing his son a picture of his old 2002.

“My dad showed me a picture of one he had when he lived in Africa,” Ricardo recalls. “I fell in love with the lines and bodystyle. He found one for sale in Toronto, so we went to see the car. After looking it over, he asked if I liked it, and I obviously said yes. The rest is history!”

With his father’s years upon years of mechanical experience, and co-ownership in M-Tricks Autosports, a Euro-specialized shop in Toronto, Ontario, it didn’t matter if the car was to be a bit of a fixer-upper. In fact, when they showed up to take a look at the 2002, the owner informed them that the motor wasn’t running right. After inspecting the engine bay, Ricardo’s father told him he could fix it no problem, and as soon as they rounded the corner of the road out, he popped open the hood, switched around the spark plug wires that were in the wrong spots, and the 2002 hummed nice and healthy.

“I still remember going with him to work on it like it was yesterday,” says Ricardo, fondly. “I still remember the sound it made when he first took me for a drive in it. I instantly fell in love with it and became hooked on cars.”

Originally, the 2002 was supposed to stay as a throwback daily driver that the duo would then setup for some light track duty on free weekends, that is until the motor came knocking. With an unfortunate case of piston slap, the search went from which tracks the two would venture out to, to what they were going to put under the hood of the ’02. At the shop, there just so happened to be a 325i sitting, so their new mission was to fit the M50B25 2.5-liter I-6 into the bay, but not without building it a bit first. 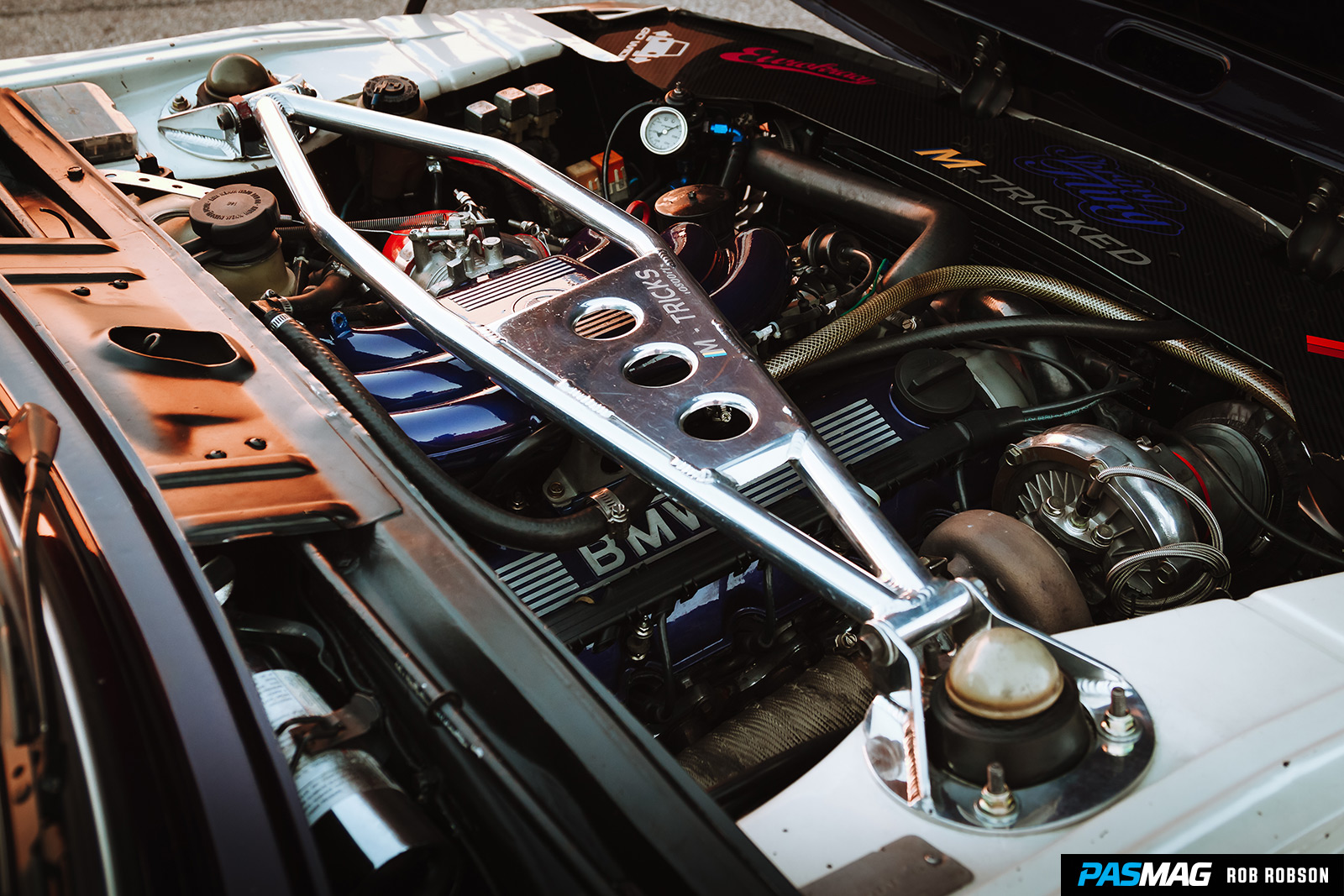 The engine from the 1990 3 Series received the bottom end from a 1988 525e before being transplanted. The engine operation actually inspired the name change on the 2002 to the 2502, sticking in theme with how BMW uses the Series name with the engine displacement to name their models. Though, the custom emblem on the back now needs to be updated to 2702, as the Mendes boys have since stroked the 2.5 out to a 2.7-liter.

Forced induction was the most recent addition to the engine, which Ricardo cites as his favorite aspect of the whole endeavor. The nights shoehorning the engine into the bay, followed by even more nights cutting and fitting countless pieces of piping to make up the turbo system were challenging memories, but some of his fondest. A T3/T4 trim Biagio 56 turbocharger plays nicely with the custom 2.5-inch piping, a Yonaka Type 11 intercooler, dual Tial wastegates, a Turbosmart dual-port blow-off valve, upgraded Siemens Deka EV1 60-pound fuel injectors, and a DIY Auto Tune MegaSquirt PNP ECU with a custom tune from Dyna Motorsports. 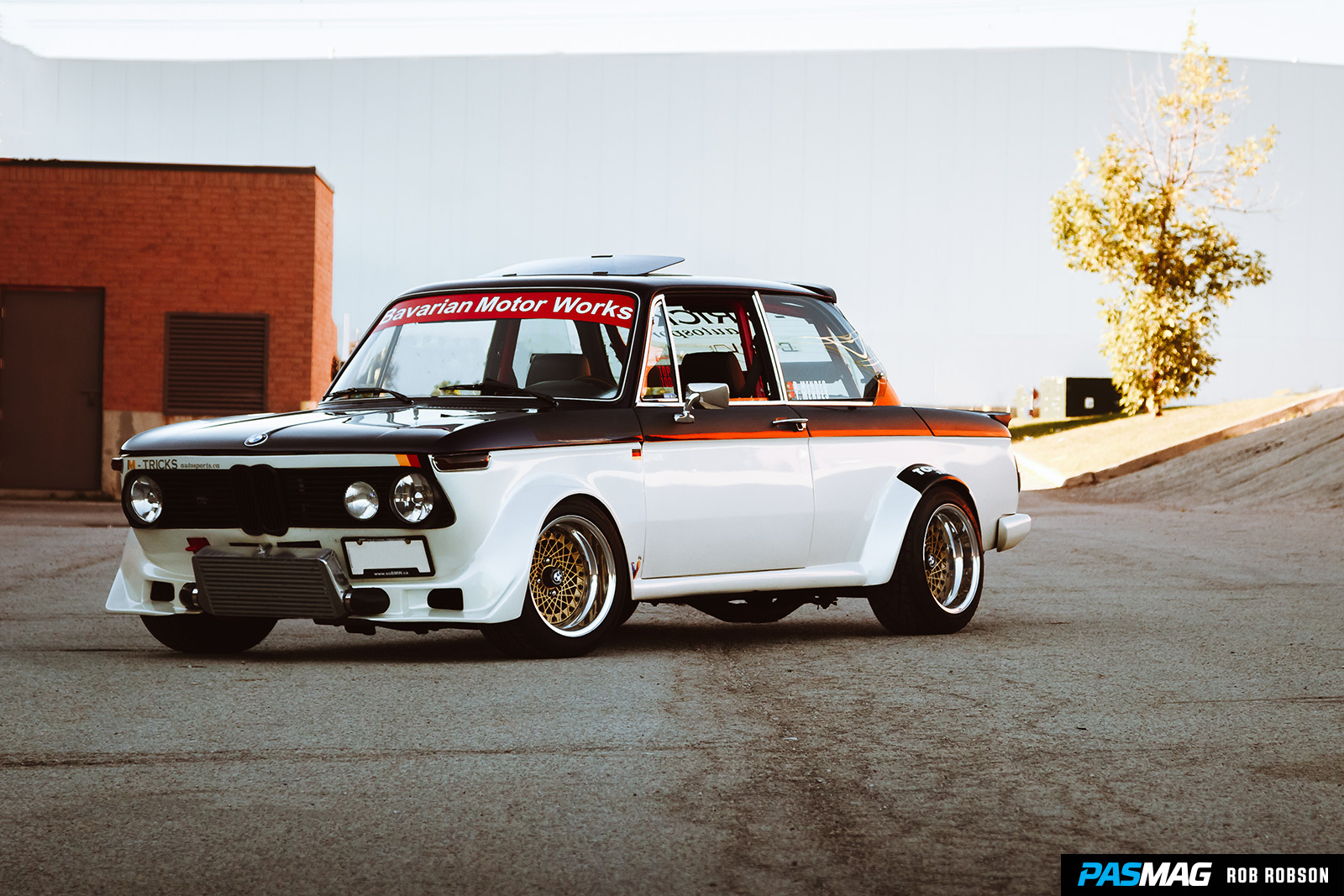 Under the hood wasn’t the only place to receive more of an overhaul than originally planned. At first Tony and Ricardo wanted a tasteful two-tone paint job and body touch up, but the brakes were put on that before all the original paint was stripped away. Cool 1 Autobody noticed just how much filler and other fun surprises were under the 2502’s skin. They suggested going all the way back to bare metal and starting again, and the Mendes squared shook their heads in agreement, so the Bimmer went under the knife - or in this case, the razor blade.

Taking on the unique and custom two-tone pearl white and purple paintjob, the BMW also received some fairly hefty body modifications. Cutting into the factory metal fenders, the gap was replaced with fiberglass fender flares modelled after the Group 2 touring car racing series 2002s of the ‘70s. The front fenders are met with with a Group-2-styled valance to match. On the rear of the car, the trunk is finished off with a spoiler from a 1988 528i, while the roof is topped off with a spoiler from a Chevy Aveo of all things.

While there is a lot of part sharing between BMW platforms, there’s also a lot of part fitting ingenuity from sources you wouldn’t even think of, similar to the Aveo roof spoiler. Parts like the Ford Ranger front springs, Volvo 240 brake conversion and third brake light, and Saab 95 center console. Even the power steering conversion was born out of part swapping between manufacturers – in this case, the power steering system came by way of a Chevy Cavalier, and the reservoir was donated by a Saab.

This is all made possible by Tony Mendes’ knowhow and drive to make things work, even if that’s not where they originally belonged. This is the same man who fabricated a metal widebody, had a working VHS player and TV, plus swapped in a 2.7-liter air-cooled Porsche 911 engine into his ’81 VW Vanagon. 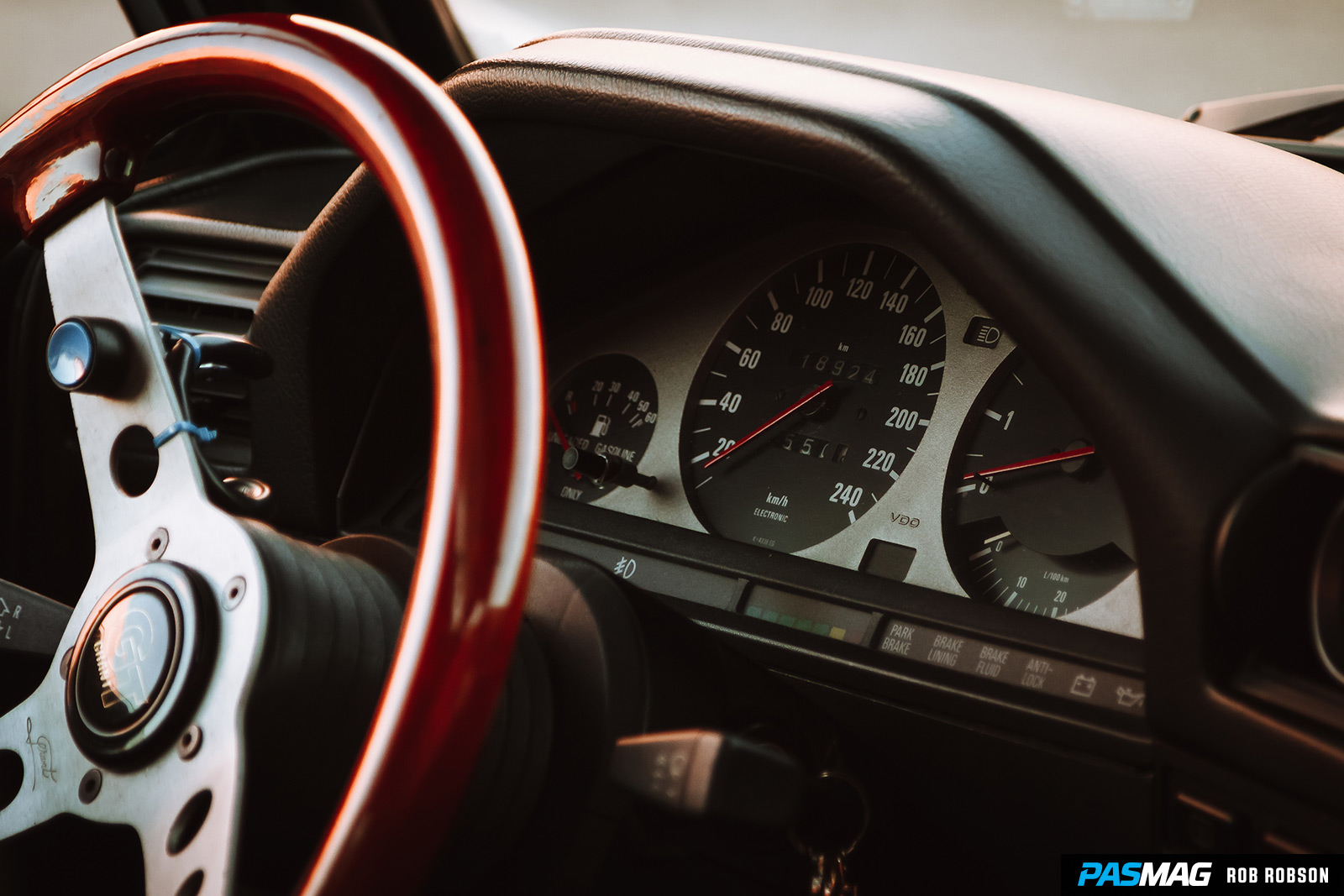 Now, just because the car took a different direction from a restored daily driver, doesn’t mean that the Mendeses forgot about track days, and that is reflected on the interior of the BMW. Inside, you’ll find the rear seats from a 1985 635i, 1990 325i dash, and front seats from the same 325i, except the driver’s side is on a quick release that’s ready to accept a Sparco Sprint racing seat for weekend warrior work. A Race-Quip four-point harness hangs from the rear half-cage, and on the steering wheel, you’ll see a blue launch control button poking through one of the holes on the spokes of the GT Grant steering wheel.

The daily driver feel of the car has been completely rounded out with the addition of an upgraded stereo system. An Alpine CDA-9835 head unit and three-way 6x9 speakers take up residence in the front and rear of the 2502, respectively. Rockford Fosgate 5.25-inch 2-ways and components take care of the the mids and highs, while a T1002 mono amplifier drives two Cerwin Vega 12-inch subwoofers in a custom enclosure. That should be more than enough bump for the daily grind.

“It’s a father and son build, and we both have input on the car,” Ricardo explains, chuckling. “Sometimes he surprises me by changing things, and most of the time I like it. There have been a lot of arguments and long nights, but best of all there are all the great memories we have created.”

And that’s exactly what makes a car like this so special. A 10-year endeavor between father and son, and the whole time they listened to no one but themselves. They ignored the purists telling them to upgrade with BMW parts instead of something else that could work just as well with a little elbow grease, and shut out those who don’t agree with the journey their 2002 has taken. This is a build completed by the truest of car enthusiasts, something put so simply by Ricardo:

“Some people like sports or movies, but for my dad and I, it’s cars.” 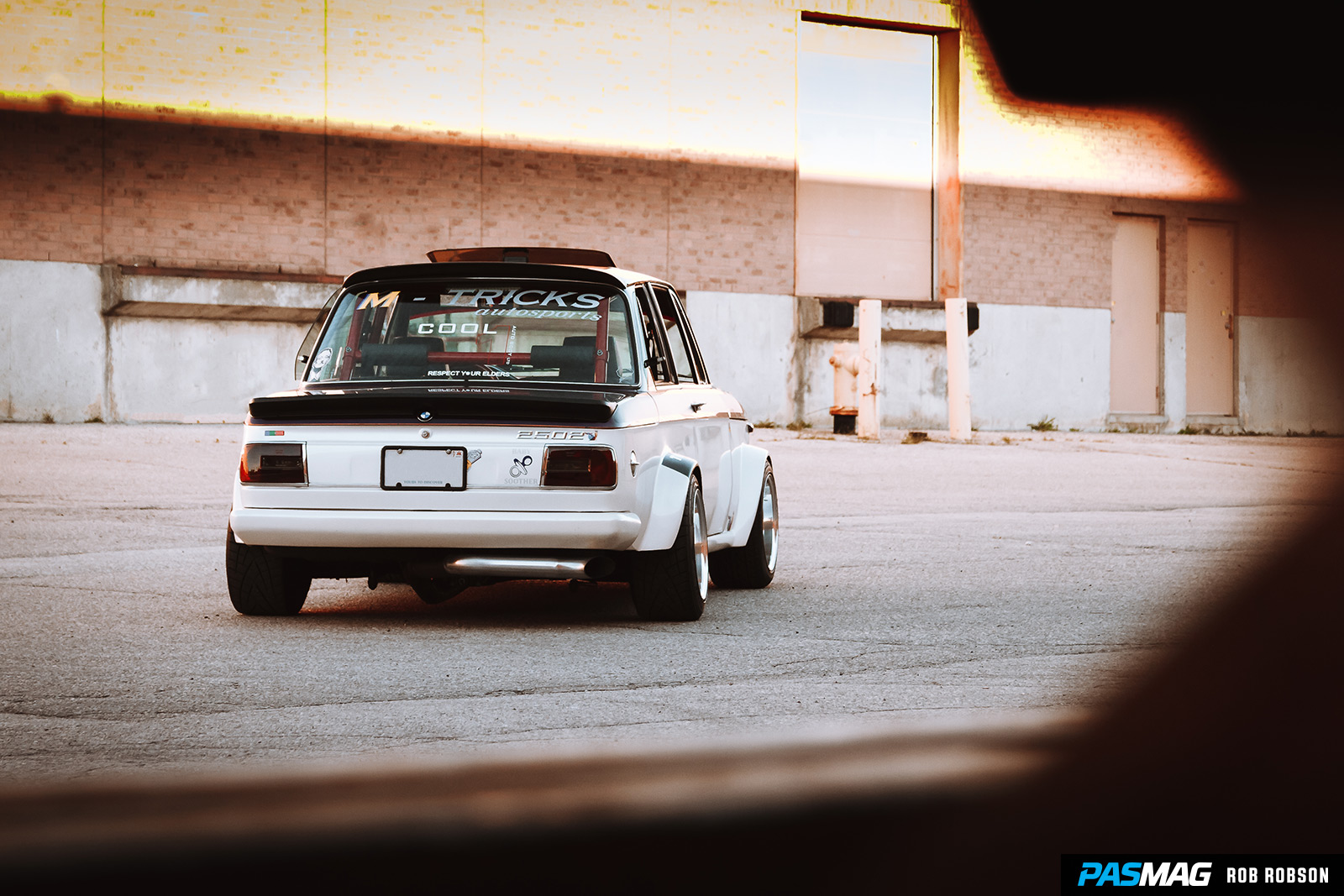