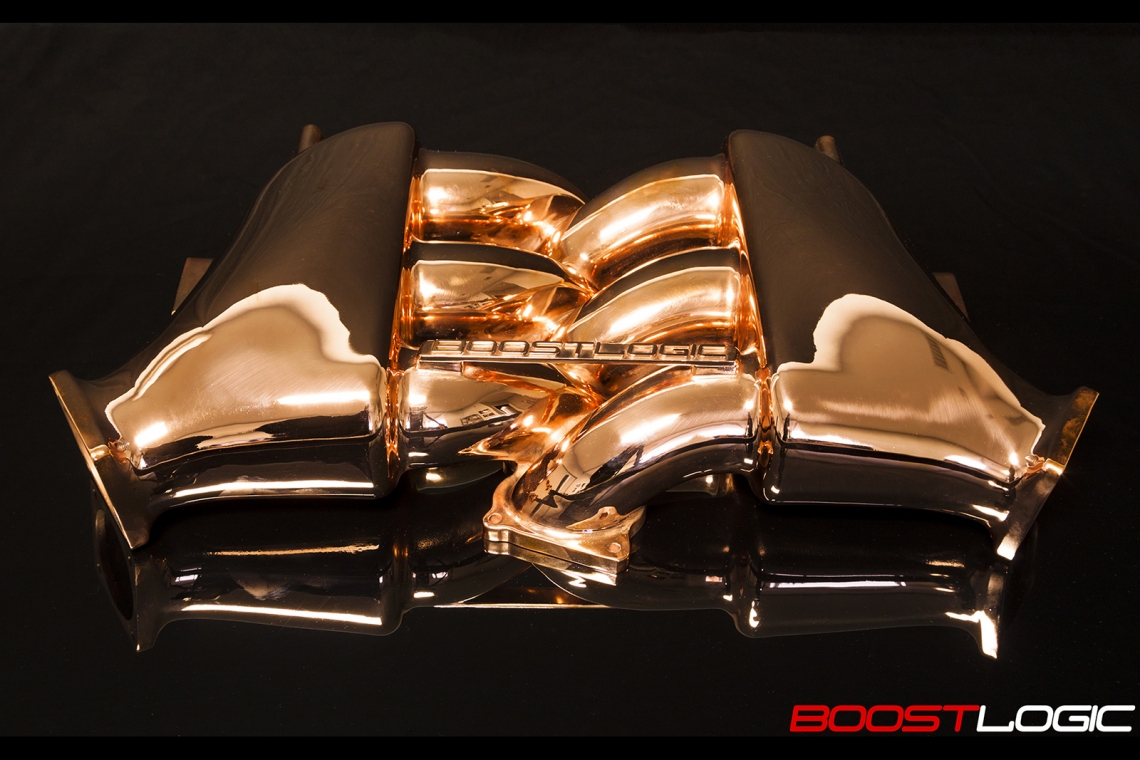 The Boost Logic VR38DETT V2 Intake Manifold has been engineered to be the pinnacle of performance among its competitors and is smoother and 5lbs lighter than their original version.

Benefiting from their extensive research and development in 2000hp 2JZ motors, they have achieved the goals set for this Manifold. An increase in torque to broaden the power-band while achieving a phenomenal horsepower gain under boost sets the Boost Logic Manifold apart from the competition.

On a direct comparison of Boost Logic’s manifold with a GReddy, they observed huge power gains while monitoring boost to be identical or lower boost on the Boost Logic Manifold. The gains are even more pronounced when compared to a stock manifold; especially the torque.

Engineering the manifold in CAD allowed the use of optimal dimensions and otherwise impossible angles determined to be ideal through fluid dynamics in comparison to a sheet metal intake manifold. Boost Logic aimed to maximize the potential of any engine/turbo setup so that this bolt on is beneficial for any HP package. The plenum size has been specifically calculated and sized for the VR38 to create the highest power gains in comparison to the stock and other aftermarket intake manifolds. The tapered venture funnel runners have been engineered for maximum velocity as air approaches the cylinder. Boost Logic chose to make the intake manifold in one piece to mimic OEM style manufacturing which will have less potential for boost leaks. The tube behind the throttle body flange is 80mm which will easily accept the Greddy throttle bodies or much larger units which will surely be developed in the future.

A unique aspect of this intake manifold is the newly designed lower runners. Casting these new runners allows it to maintain the linear transition from the aftermarket plenum to the intake ports on the head.

When it comes to maximum power, 6 injectors simply aren’t capable of providing enough fuel to meet the demands of ethanol fueled engines. Boost Logic is providing an optional third rail setup which will allow 6 additional injectors aimed directly into the intake port for accurate fueling. The 12 Injector Option will be an extra charge on top of the current intake manifold price. This will include a rail, brackets, extra machining of the Boost Logic Intake Manifold and will be pre-mounted to the plenum upon shipment.

Boost Logic also offer the upper pipe kit for customers that change to this intake manifold. Due to plenum size and throttle body location change the upper pipes have to be modified. Boost Logic offers the one piece pipe upgrade for a simple install! Pipes available in polished or Crinkle Black.

The 12 Injector Option comes complete with fuel rail, mounting brackets and machined upper plenum for the 2nd set of injectors.

Dress Up Bolts Titanium Hardware Kit - AeroCatch Hood Pins
This hardware kit is designed to work with all Aerocatch hood pin sets that use a countersunk bolt head design. The titanium hardware kit will improve...