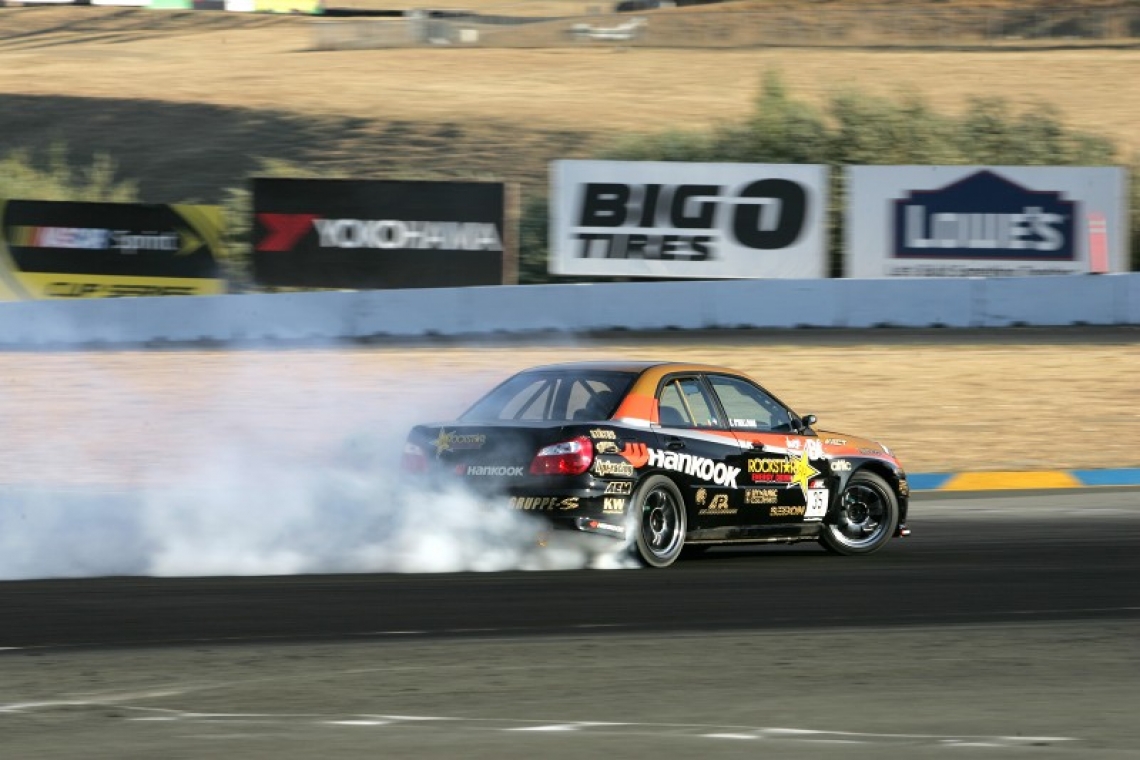 As expected, the big story surrounding the days leading up to FD Round 6 at Infineon was the points chase. It was clear that two-time champion Tanner Foust would be dethroned but which sharpshooter would it be. Chris Forsberg was leading the points race and some consistency would lock it down for him. However, waiting to strike were Ryan Tuerck in the Gardella/Mobil 1 Solstice and Tyler McQuarrie in the Falken 350Z. Forsberg has definitely been on point but it would take some skilled driving to knock him from his perch. The track was ideal, the weather superb – it was time to get sideways.

If qualifying was any indication of what would happen, then Forsberg would be a threat. He qualified third behind Ryuji Miki in the A'PEXi/Hankook/Exedy Clutch Mazda FD RX-7 and Katsuhiro Ueo Drift Speed/Behrman S15 Silvia who was first. Some of the big guns were off pace with Tuerck 7th and McQuarrie who qualified a dismal 13th.

On to the eliminations where some great action and trademark Formula D drama unfolded. There were mechanical problems and last minute repairs to keep teams alive. Former champ, Sam Hubinette in the NuFormz Dodge Viper defeated Tuerck who was hungry for some points but they would elude him. Then Forsberg’s most important match-up versus Calvin Wan in the Falken S15. The battle was tight, too tight as Wan made contact with Forsberg damaging his front suspension. It was clear that the five minute repair was not enough to keep the Z competitive and in an unusual move, the judges demanded a One More Time (OMT) after a one-sided run. However, without any additional time spent on the Z it would be certain Forsberg would likely bow out. After the loss, it was not without protest and they were granted a rematch. In the rematch Wan slid into Forsberg again and in the same spot, gift-wrapping the win for Forsberg. However, Forsberg was not able to best Stephan Vernier in the Cooper Tires/Crawford Performance/Rhys Millen Racing Subaru STi in the following round.

Teammates Ken Gushi (in the RS*R Scion) was paired against Foust in his Scion but the former champ was no match for the young gun. With better lines and speed, Gushi left Foust behind to have to battle it out for third. Foust and Miki were paired up where their tight tandem earned them an OMT from the judges. After the second cat and mouse run, yet another OMT was requested of the fatigued drivers. Foust eventually cracked by making contact with the lethal RX-7 that cemented third place for the Japanese driver, Miki.

In the finals, it was the unfamiliar face up against the young Gushi. Many in the crowd thought that it would be a bloodbath with the Japanese-American victorious. For Gushi though, it was no to be when on the second lap, the Scion tC gave up and could not be restarted. The win was Vernier’s first in Formula D and he couldn’t be happier considering he has never gone past the Great-8 in three years of FD competition. An emotional Vernier thanked his team and sponsors for the win after an event that put Forsberg in a tight spot to win the Championship. Forsberg will need to advance into the Top 16 and beyond in the final round to seal up a title for 2009.