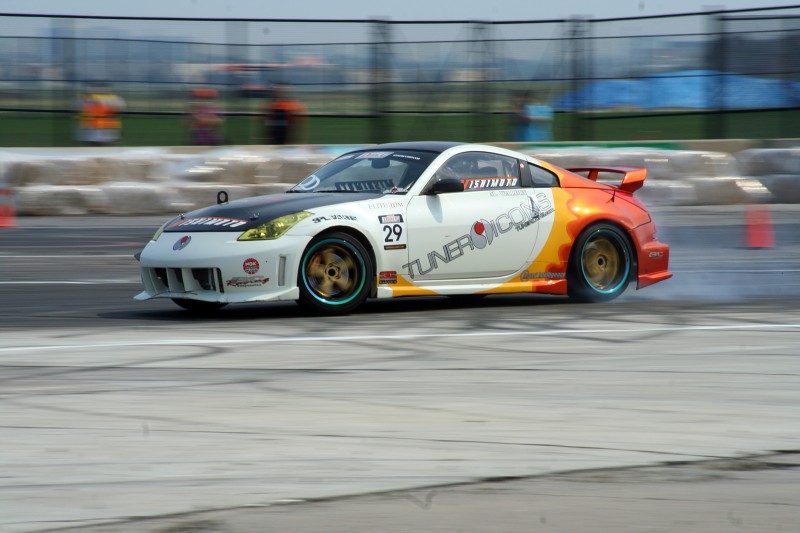 After another triumphant return to Toronto, the Castrol Drift Mania Canadian Championships (DMCC) gave fans the entertainment, car show competition, and drift action the series is known for. With the qualifying and ProAms out of the way, it was time for the Drift Mania drivers (mostly Quebecers) to put on a clinic. Unlike last year though, 2009 has been dominated by drivers from outside La Belle Province. American, Matt Waldin in his Import Intelligence 350Z was leading the points into the event and Ontario’s own Pat Cyr won the first two events in his Privateer Corolla. Two time defending champion, “Steady” Freddie Girard in the Kumho Skyline hasn’t taken a win yet this year but had been consistent enough to cement 3rd in the points standings. Relative newcomer Cyr won the first two events and Waldin took Round 3 but would we see a repeat of the Pat ‘n’ Matt show?

In the final battle it was Matt Waldin in his twin turbo 350Z versus Claude Poirier in the BFGoodrich Nissan 240. The V8-powered 240 had the power to keep up but the skill level was no match for Waldin who has been on a roll lately. To add to BFGoodrich’s reputation (and tires championship points) driver Ryan Lanteigne bagged 3rd spot in his BFGoodrich GTO. The BFGoodrich Team could very well have made it podium spots 1, 2, 3 had driver Carl Nadeau not had a horrible crash earlier in the day. Nadeau was piloting the BFG Solstice and found his path after a clutch kick straight toward a concrete barrier. “I hit the wall at over 100km/h… but the superior design of the cage in this car saved me,” said Nadeau.

Steady improvement has been seen by all DMCC drivers, but the new kids on the block are making it very difficult for veterans like “Steady” Freddy Girard and company, as he will not see a three-peat for championship this year. Waldin however has it all but sealed up, barring any sort of disaster for the fifth and final round.

DMCC Round 4 2013: Victoriaville, QC
One of the most exciting stops on the DMCC schedule is the Victoriaville round. It is the event where DMCC takes an empty snow dump in the middle of...

DMCC Round 3 2013: Ste-Croix, QC
The third round of the DMCC series took place at the River Side Speedway located in STE-Croix, Quebec. The last time DMCC came to this track was back...