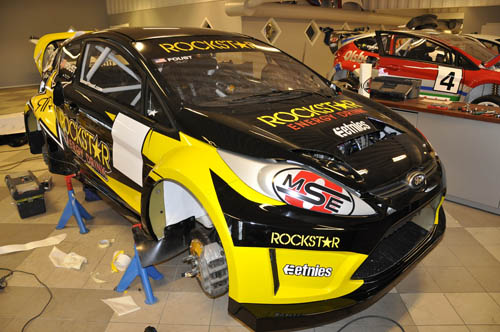 Foust will pilot a 600-horsepower, all-wheel drive Rockstar Energy Rally Cross Ford Fiesta prepared by champion Andreas Eriksson's Olsbergs MSE Ford team. Foust got his first feel for the vehicle at X Games in 2009 when he drove one of the team cars to a bronze medal.

Foust said this contest at the Pista Automóvel de Montalegre in Montalegre, Portugal, (May 1-2) is a great opportunity to get a handle on this exciting discipline.

"These are some of the best rally cross drivers in the world and I'm looking forward to going head-to-head with them and learning from them," said Foust.

Foust is a two-time Formula Drift champion and X Games Rally gold medalist who has twice represented Team USA at the international Race of Champions.

The multi-talented racer and TV host is expected to be a threat at the Portugal competition. He took part in a contest at the Lydden Hill Race Circuit in the UK earlier this month, qualifying with the fastest time of the day.

He will take on four events overseas before European-style Rally Cross events start up in America. The sport will dominate the second-half of the traditional U.S. rally season.

"European-style rally cross is an exciting new discipline for me and I think American fans are going to really enjoy it," said Foust.

The sport is a blend of circuit racing, off-road racing and rally competition. It promises intense crowd-pleasing action in a fan-friendly track environment. Six drivers line up to start at once, piloting high-horsepower compact cars through race traffic over a challenging short course that features jumps, unbanked turns, hills and transitions between pavement and gravel.

Tanner Foust is a versatile and multi-talented driver known for his supreme car control and a proven track record of podium placements and national championships. He is a two-time Formula Drift champion (2007, 2008), and one of just four drivers to have been invited to every X Games Rally competition, with the Rockstar driver scoring gold in 2007, silver in 2008 and bronze in 2009. He has twice represented Team USA in the annual Race of Champions, teaming with NASCAR star Carl Edwards in 2008 and Travis Pastrana in 2009.

Even if you haven’t seen Foust on the track you’ve likely witnessed his precision car control on TV or the big screen. He was a lead driver in the Fast and Furious: Tokyo Drift, Bourne Ultimatum, Dukes of Hazzard, Red Dawn and Iron Man 2, movies, and also handles stunt driving in numerous popular TV shows and commercials.

Foust is currently an on-air host for Supercars Exposed, and was also picked as co-presenter for the US version of the seminal BBC auto show, Top Gear.

TANNER FOUST'S RALLY CROSS PROGRAM IS MADE POSSIBLE BY:

2020 Formula DRIFT Schedule Announced
Following the announcement made this morning at the annual Formula DRIFT media conference during the SEMA show, we are pleased to release the...

2019 Formula DRIFT Awards Ceremony Recognizes The Stars Of The Series
As the traditional end to the Formula DRIFT season, the series organizers held their annual Awards ceremony the evening after the thrilling finale...