Airing It Out: The History of Air Suspension 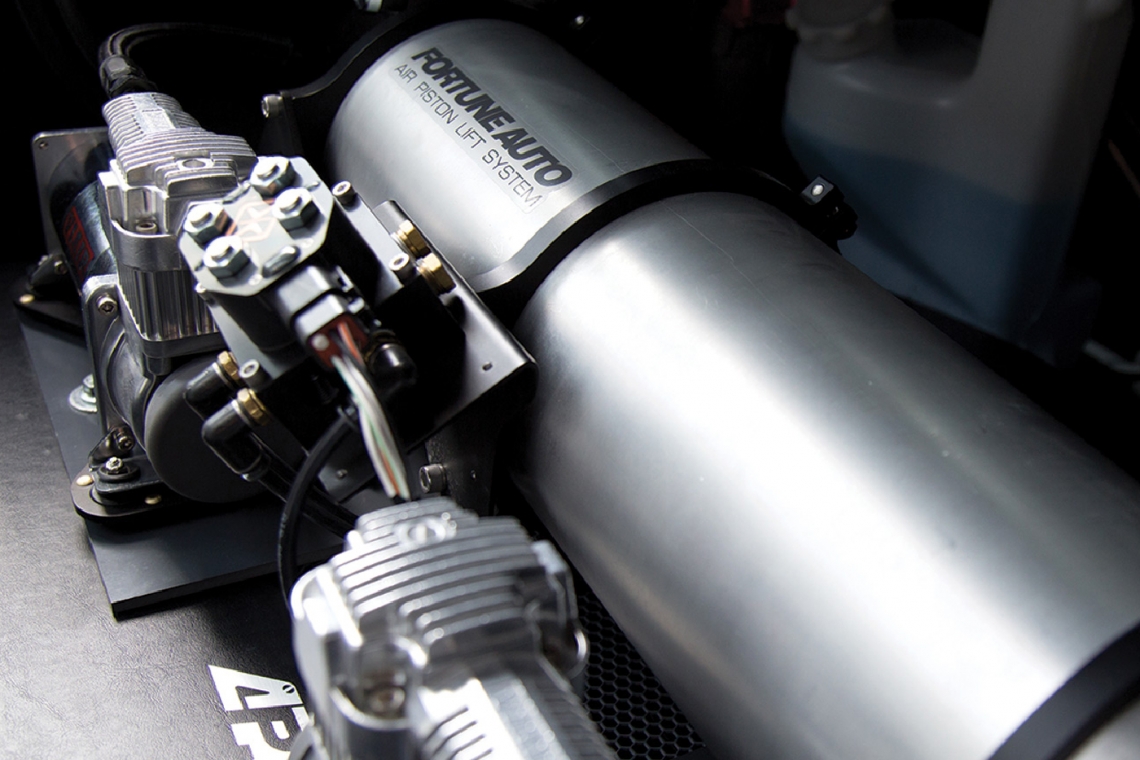 Let me see you get low. (You scared?)

Pssssssht. Up. Pssssssht. Down. There really is nothing comparable to the feeling of adjustability at your fingertips. That’s exactly why air suspension is such a tremendous trend today. Coilovers are great for adjustability and damping rates, but the sometimes harsh ride and the fact that you have to physically get out of your car, take your wheels off and take your tools out leaves much to be desired. That’s the point when your buddy down the street airs up from inside his old LS400, laughs, and rolls off.

However, air suspension still seems to be a mystery to some. There are wild misconceptions, genuine concerns, and the question of “How exactly did we get here?” You came to the right place, friend-o. We’ve done our homework, so here’s our essay. 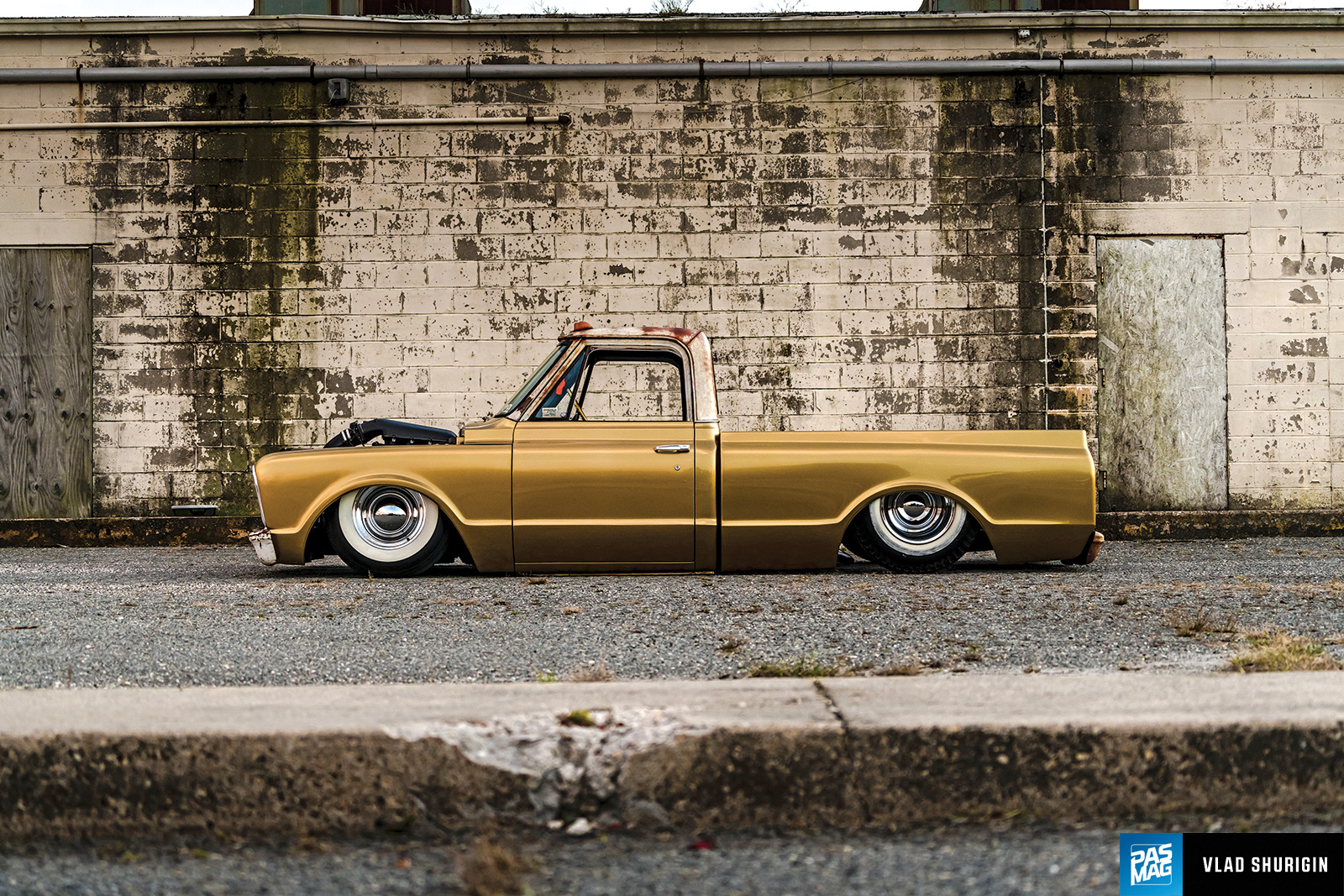 In recent history, air suspension was synonymous with the VIP scene and it almost exclusively stayed that way for quite some time. Now, everyone and their mother can get a kit tailored for their vehicle. The exotic takeover has Lexuses (Lexi?) and Acuras moving over to make way for the Liberty Walk Lamborghinis and Rocket Bunny GT-Rs. What came before all of this though? The answer is mini-trucks.

“In the ‘90s, small trucks were extremely popular and lowering them was popular as well,” explains Kevin Crowhurst, President of Air Assisted. “People were finding new ways to get lower and there was a need to have some form of adjustable suspension to lift [the vehicle] back up.” 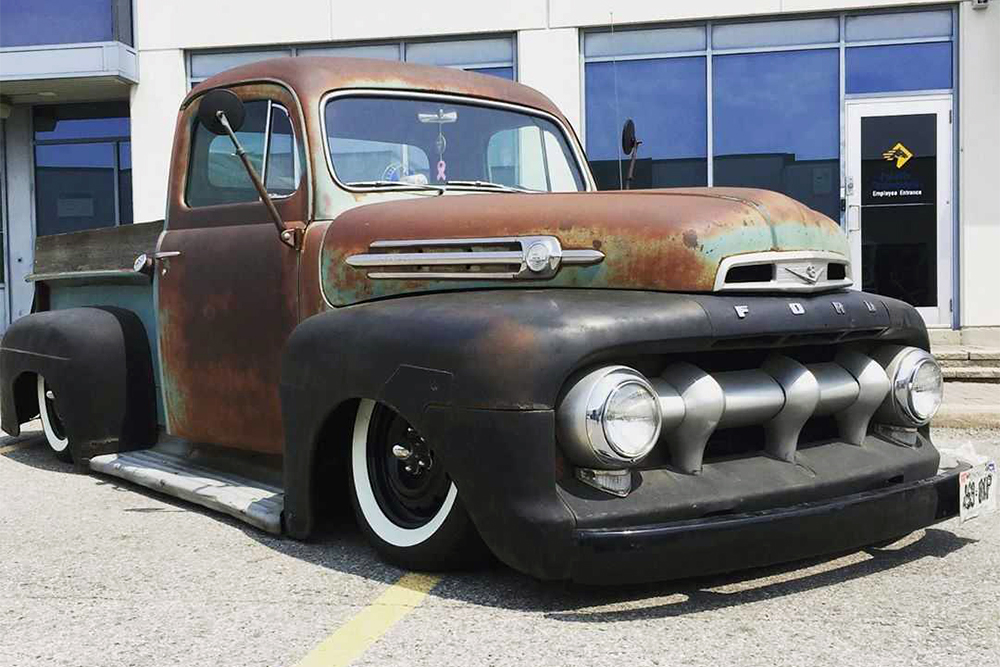 The ‘90s was the era of mini-trucks and low-riders. With air suspension systems available from their larger off-road brothers, the systems were adapted to fit and used for low. Of course, with the competitors in the sub compact show scene always looking for a new edge to get a leg up on their rivals, air suspension was the way to go.

“Air suspension, for many years, was called a major modification,” Crowhurst says. “That would score somebody a lot of points in their class or category, and maybe be the difference between them taking home the trophy or not.”

As you can imagine, jamming a truck setup into a Civic has its downfalls. The ride was also super mushy and handling was diminished, and as Freddie Fernandez of Autofashion USA tells us, there were even larger sacrifices.

“If somebody tried to do a bag setup, they would have to cut into the unibody,” Fernandez laughs. “With air cylinders, it was pretty much bolt-on. You’d just have to make custom brackets.”

Air cylinder suspension systems were a step up and the first air solution for imports. They were smaller systems with smaller components to match the sub compacts they were being installed in. The ride quality still wasn’t great, but it was leagues better than what truck bags had been delivering.

In 2003, rumors of a company in Japan developing vehicle-specific kits, with air bags designed to replace the spring on the strut, began swirling. That company was Airrunner. Fernandez, having previously worked with the lead engineer, jumped right on board, put his Scion xA on air and didn’t look back.

“The bags were different and everything was just made for the car,” recalls Fernandez. “The comfort was there and the reliability was there – almost like the OEM stuff, just more adjustable.”

Vehicle-specific kits with improved management systems really changed the game. Nowadays, air systems are digitally controlled and come with preset ride heights that you can change right on a remote or your phone. High-end OEMs like Audi and Mercedes-Benz offer air suspension kits as factory options. 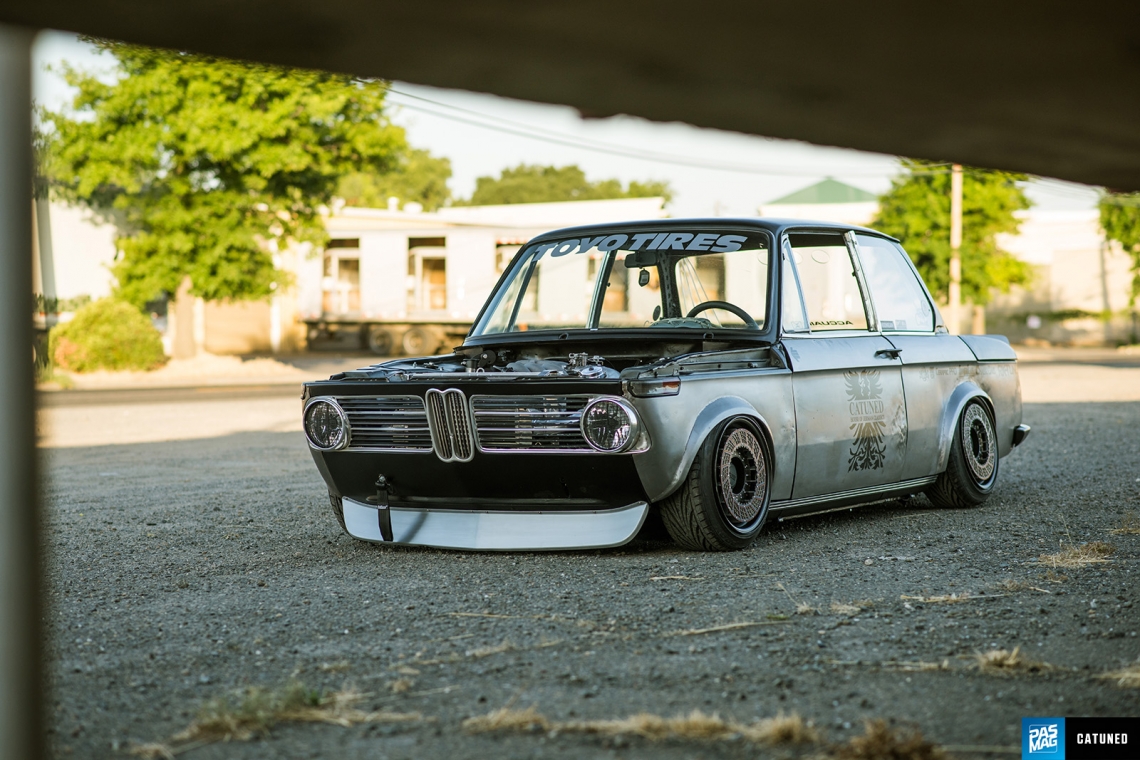 Even though air suspension has been in the car modification scene for about 20 years, there are still a lot of ‘what ifs’ for potential buyers. How do you not end up like the VW, whose bags leaked and now can’t even get a jack under the frame to tow it out?

Research and do your homework is the simple answer. In this market, you really get what you pay for, and air suspension isn’t a market you where you want to be learning the hard way. For a first time buyer, it’s best to go with middle- to high-range equipment. If you cheap out, it’ll bite you later.

“A first time buyer is probably best going with a digital system with preset ride heights that are modern and easier to use,” advises Crowhurst. “Something that’s less intrusive and doesn’t require any major modifications to your car.”

So now that you know where to aim your sights, you need to know what exactly it is you’re shooting for. With a market that’s so saturated with different setups, it’s easy to lose your target. Looking at vehicle-specific kits ensures reliability. Universal kits can be slapped on anything and likely aren’t tested on your exact model. Once your kit is picked out, get it done right. 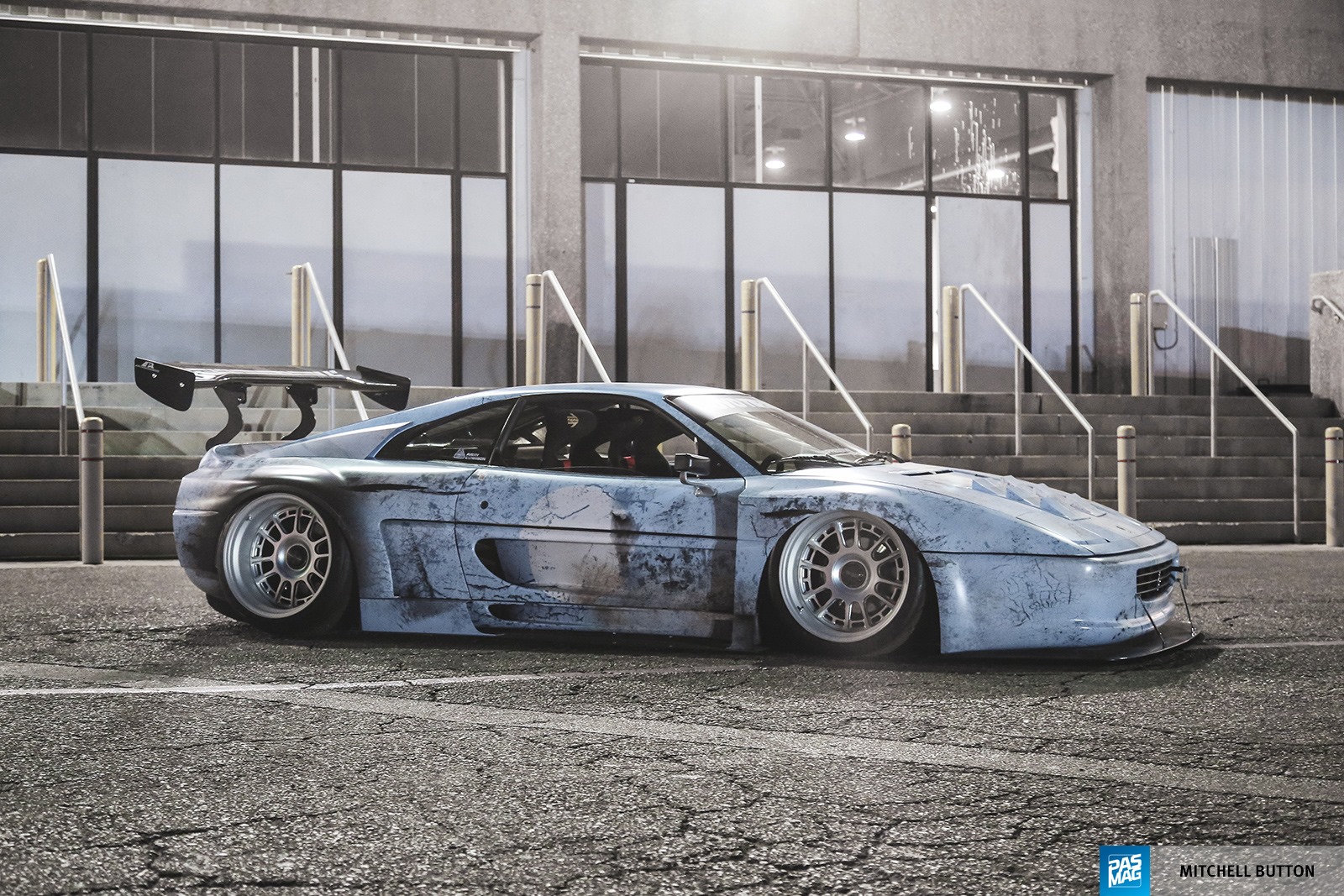 “Make sure you’re going to someone reputable to do your install, otherwise you could end up hating it,” warns Fernandez. “A lot of people say, ‘Oh, I can install it,’ and next thing you know they’re saying, ‘F@#$ bags!’”

“There’s a lot of wiring involved and air line running,” Fernandez continues. “It’s something that’s running in your car; like anything else, you’ve got to do maintenance – it’s not going to run right all the time.”

Make sure to check your rubber as well. Continental or Firestone, those same people who make your tires make most high quality bags and sleeves. That also means less of a worry for those of you looking to run air in colder climates. Their rubbers run in snow, too.

The air trend trickled down through trucks, to sub compacts, to the dub scene, to VIP, and now to the present, with everyone – from FR-Ss to Lambos – airing up. Air suspension has come a long way and has a lot of heritage that has lead to it being the most popular choice for a comfortable, everyday suspension. Know what you’re looking for, talk to people with knowledge and catch up to your friend in the LS and show him how you air out across the street from your car with your iPhone.

“Air suspension, for many years, was called a major modification. That would score somebody a lot of points in their class or category, and maybe be the difference between them taking home the trophy or not.” – Kevin Crowhurst, President of Air Assisted. 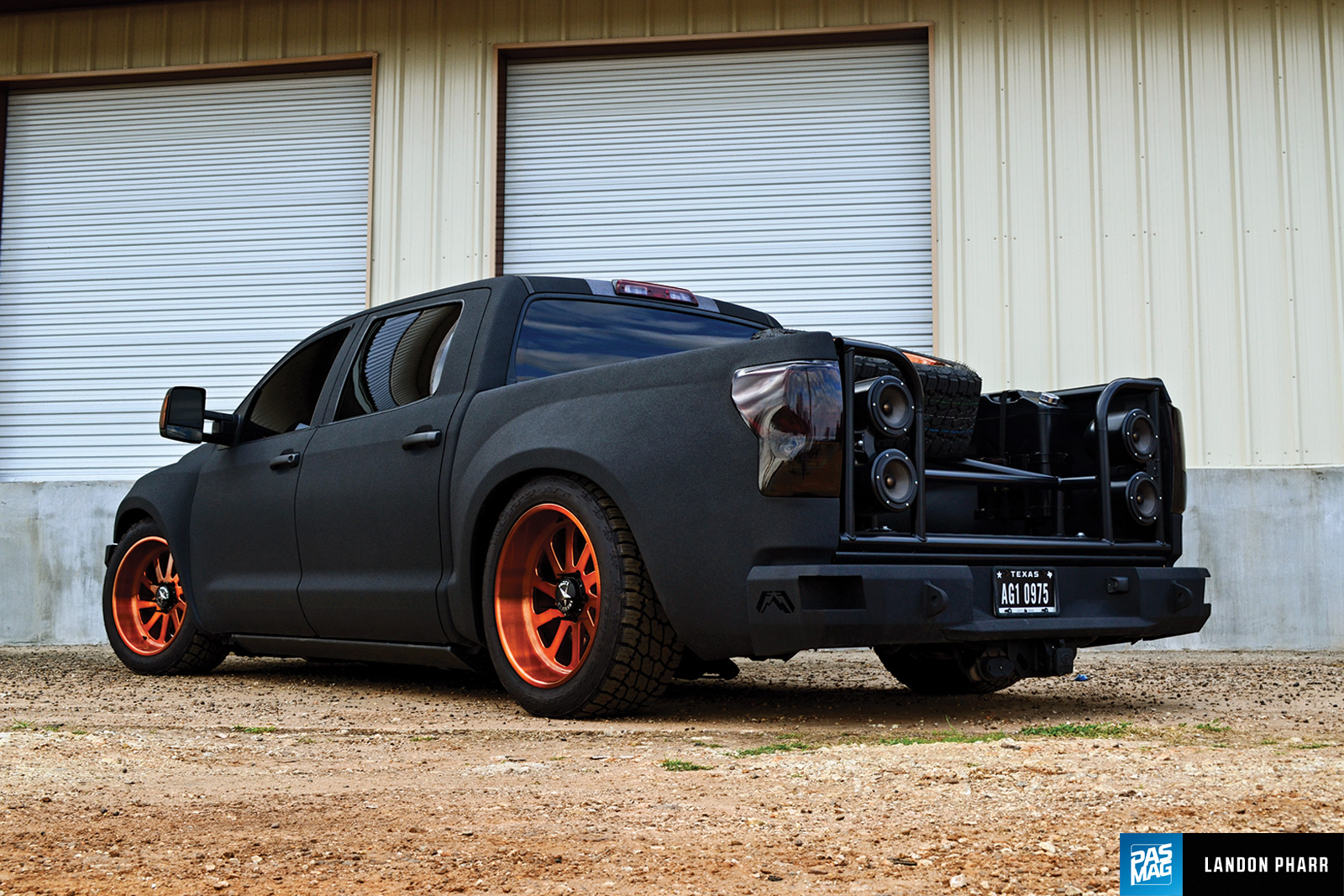 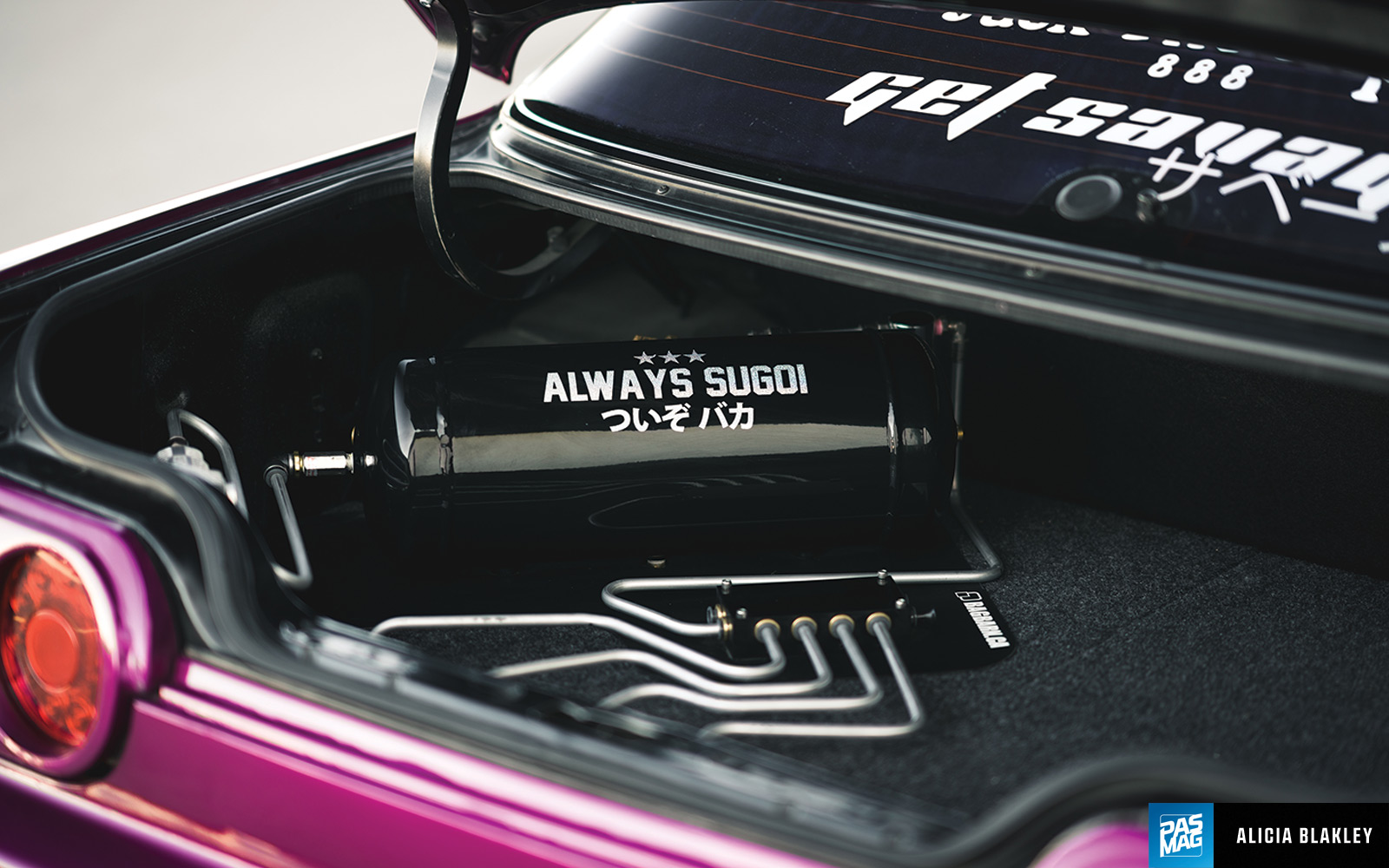 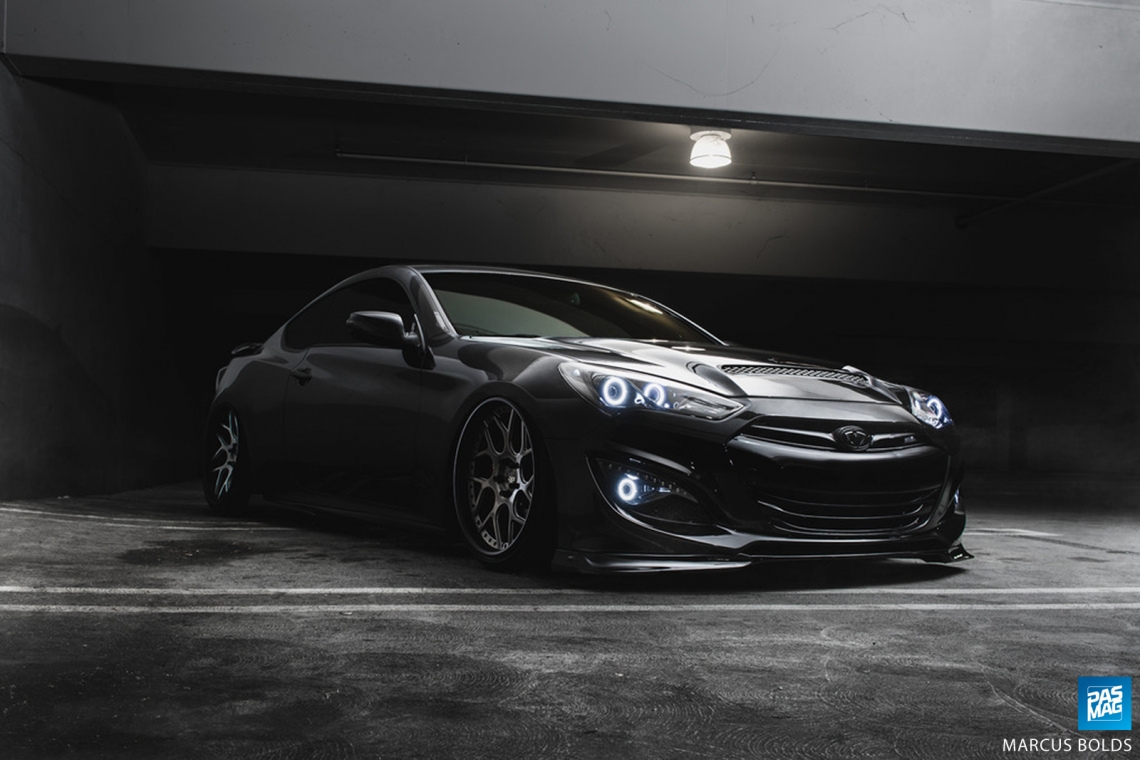 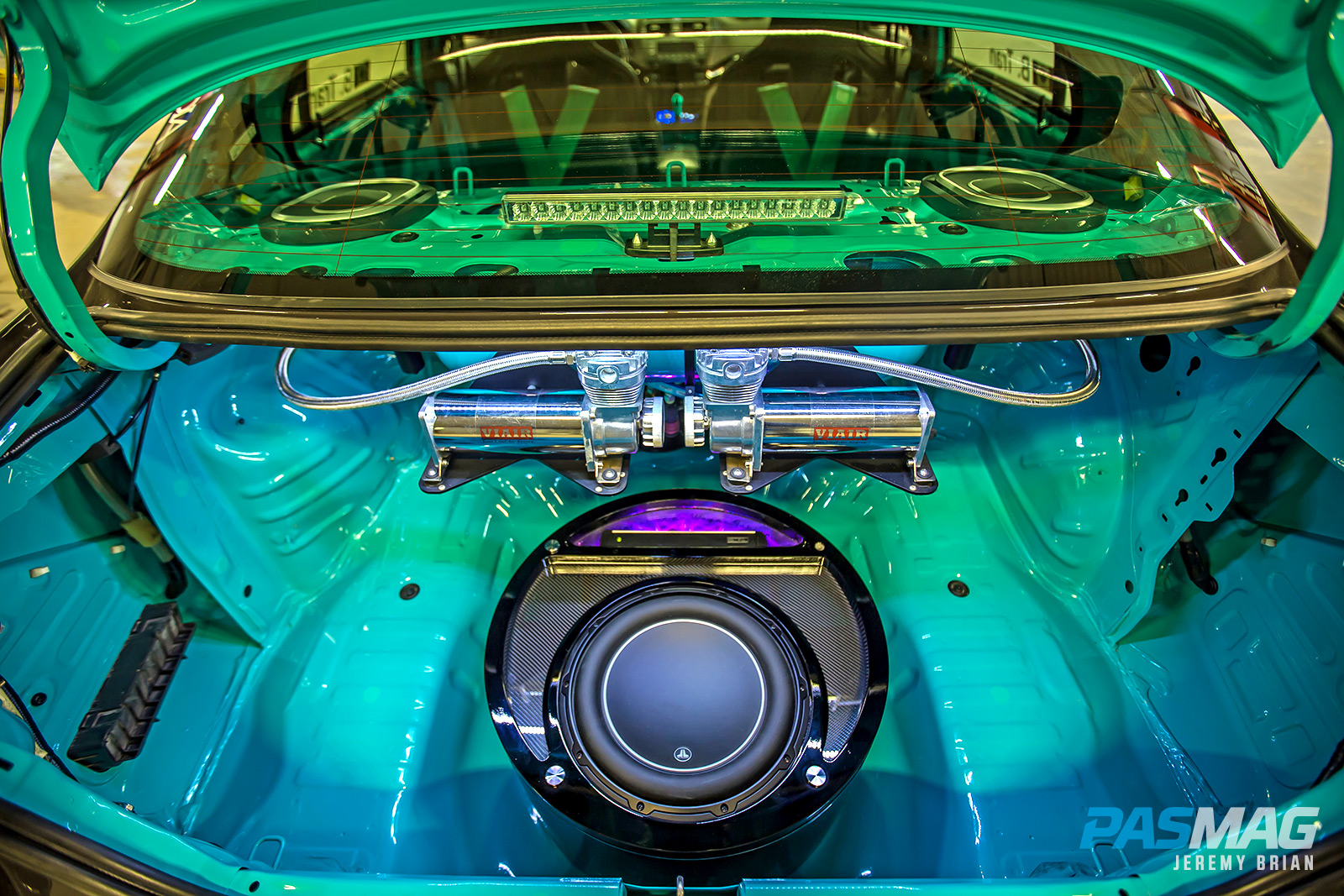 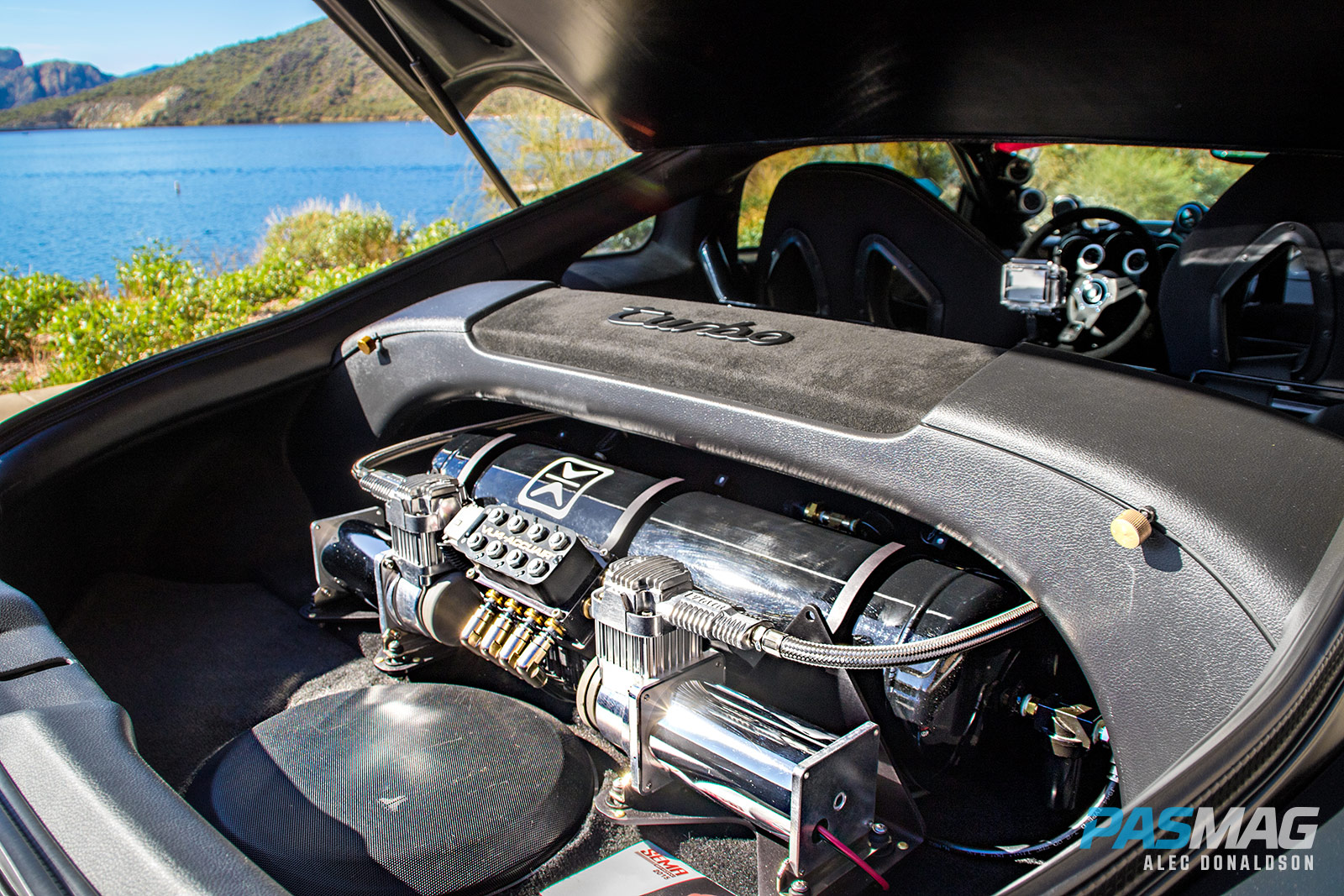 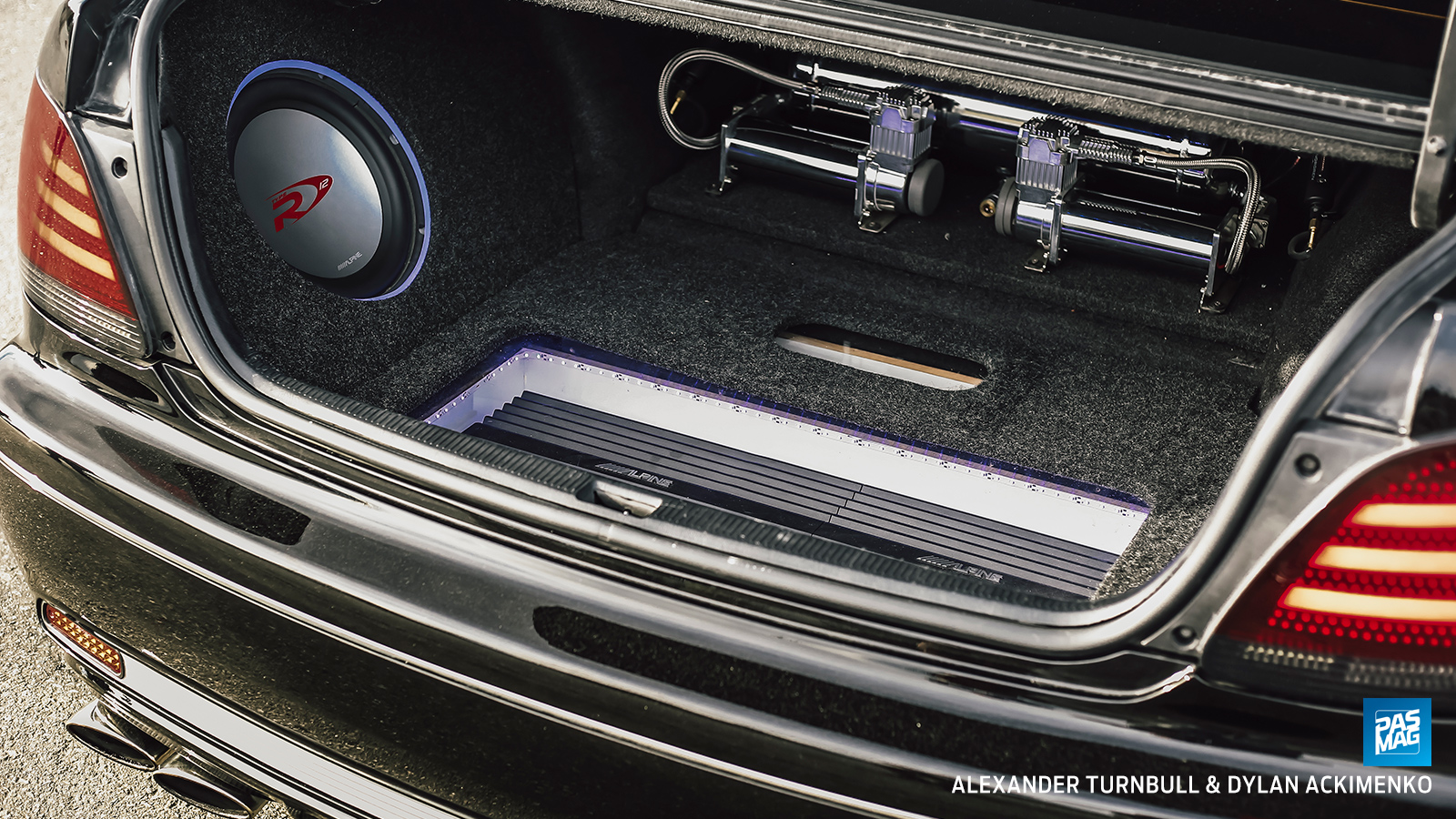 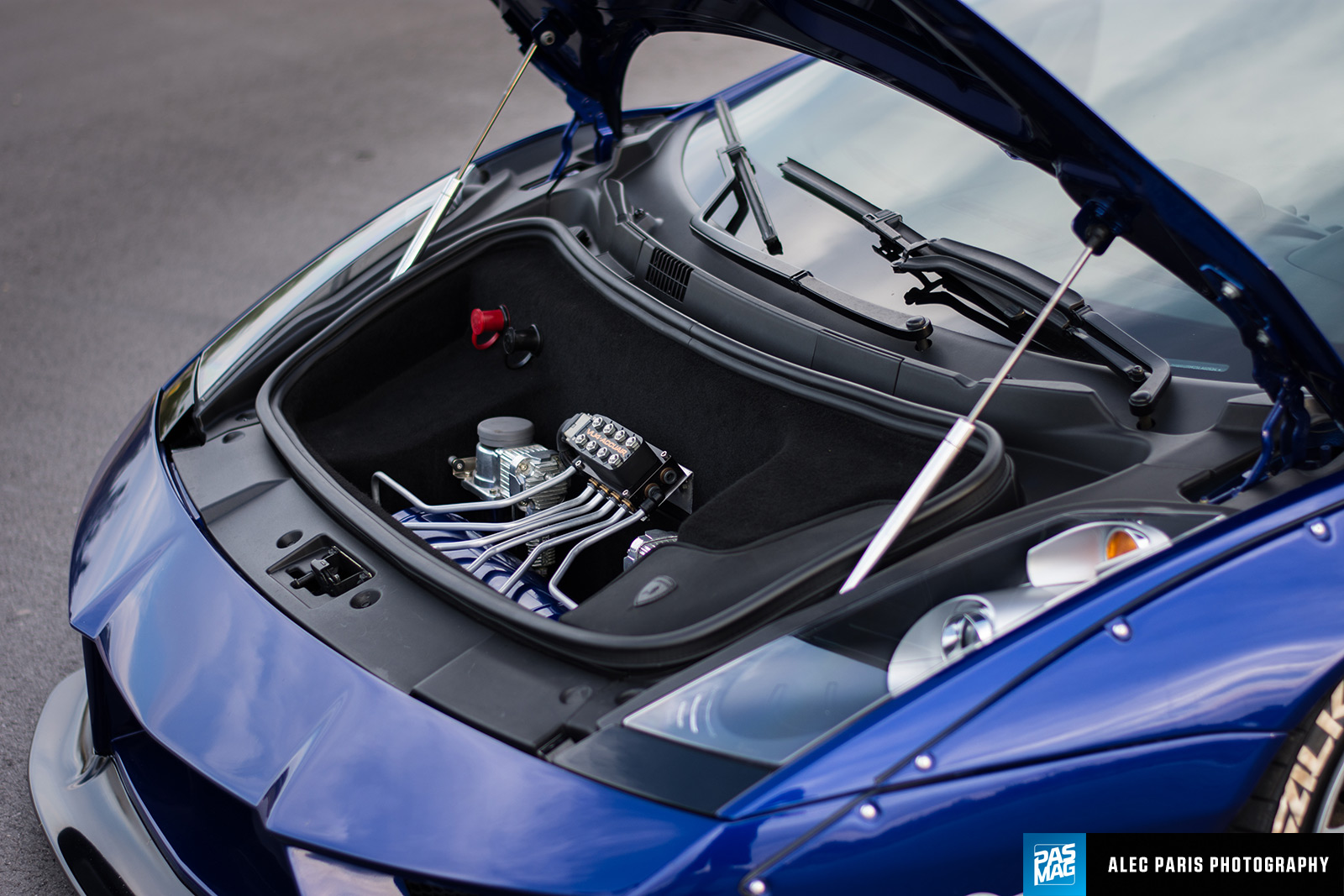 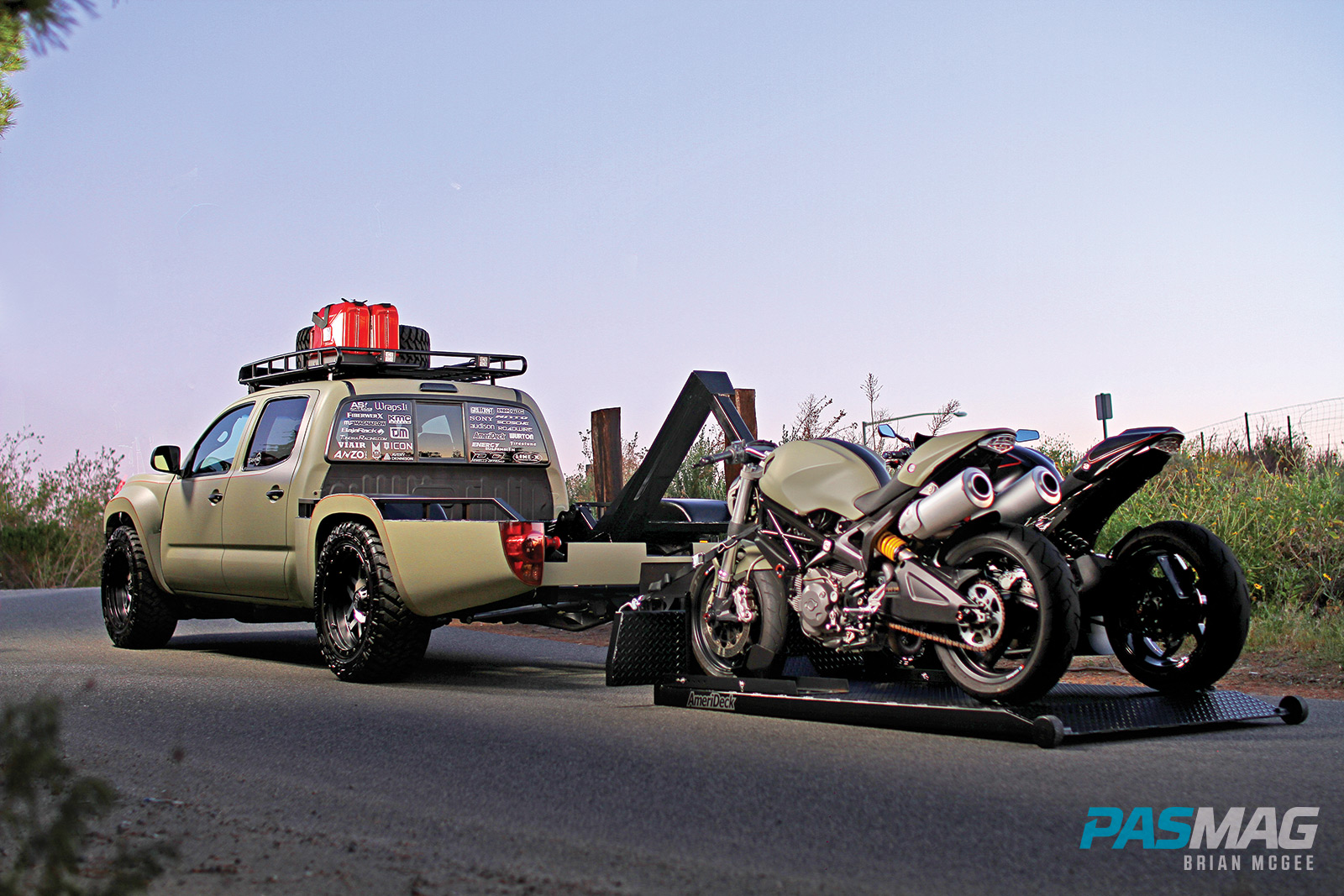