When a plan comes together, the results speak for themselves. We had all seen the teasers for Rhys Millen’s Genesis Coupe build in the weeks leading up to SEMA, but we were all unaware at how he would cap it all off. The fabrication work was impressive, but if the look and the accents of the car didn’t work, all of the forward progress made would have been lost in translation. Well, the critics were silenced when Millen unveiled this jaw dropping RMR460 Genesis Coupe, which pushed every boundary it could possibly find.

The mission was far from simple; crank up the horsepower without a supercharger or turbo and sleeve the engine into the middle of the Genesis Coupe.


As if the exciting Genesis Coupe hadn’t done enough to improve the Hyundai brand image already, Millen took another Hyundai powerplant and show-horned it into the nimble FR chassis! As you can see, the real bold move (or crazy idea) was to totally skip trying to make engine fit in up front and completely re-engineer the entire car to accommodate the powerful V8. Dubbed the “Tau” engine by Hyundai, the 4.6L mill powers the flagship sedan and produces 375hp in stock form. The mission was far from simple; crank up the horsepower without a supercharger or turbo and sleeve the engine into the middle of the Genesis Coupe.

With that, the build process split up into two teams and got to work. One group would focus on the engine build and the other on the extensive chassis modifications to give this sport coupe a real super car makeover. The V8 was shipped to RMR and torn down to have it all machined in prepara 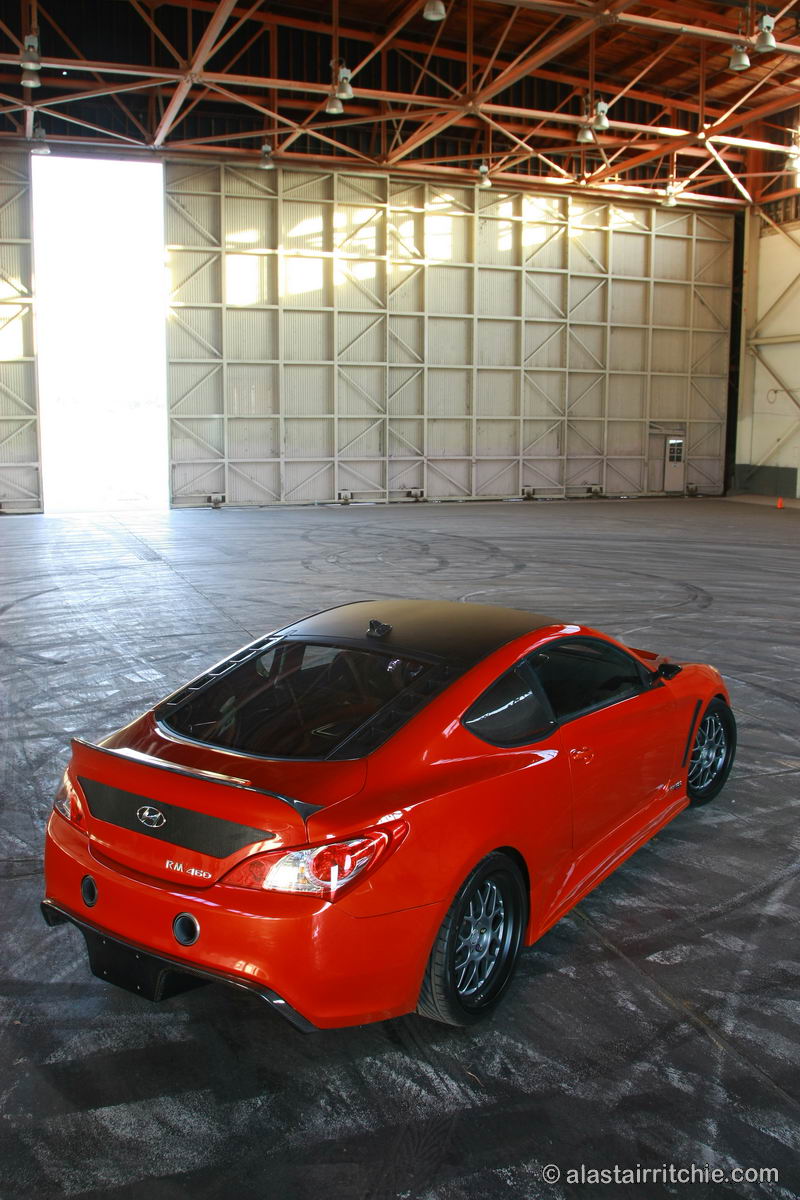 tion for new internals. High compression JE pistons were added and the heads were ported and polished. The parts were reassembled with new gaskets and fortified ARP studs. The fuel system got a bump with a pair of twin Bosch 44 pumps draining a Fuel Safe tank to feed thirsty 480cc RC Engineering injectors. The engine got some more breathing room with an elaborate RMR individual throttle body system with sandwich filters taking in huge gulps of Cali air. The exhaust heads into RMR stainless steel headers and a massive exhaust piping system crafted by RMR from stainless steel.

According to Millen, the net horsepower is an estimated 475-500whp put to the ground! The obvious weight distribution advantages will make this particular version of the Genesis run with a few of the most outrageous exotics in a straight line and in the corners. Putting the power to the ground was obviously an issue, but a Mendeola S5 sequential transaxle with LSD fit the geometry perfectly and the Driveshaft Shop axles will prevent breakage.

The performance of the car in the apex also received some attention. Millen installed a set of his off the shelf RMR sway bars to reduce the roll in the car. He also sourced out a set of KW Variant 3 coilovers for all of the adjustments the car would require including independent compression and rebound.
Even the factory Brembo brakes were surely not enough for this kind of power, so Millen ended up with a large set of StopTechs all around. The fronts are 6-pistons with 355mm rotors and the rear helps out with 4-pistons clamping down on 345mm rotors. Finally the connection to the ground was made with some Toyo R1R tires measuring 255/35R20 and 285/30R20 wrapped around some super-sexy HRE 560 forged alloys.

N-fluence: Greg Bauchat's 2020 Hyundai Veloster N
If the road is less traveled, doesn’t that just mean there’s more to discover along the way? Greg Bauchat has been traveling the KDM road for over six...