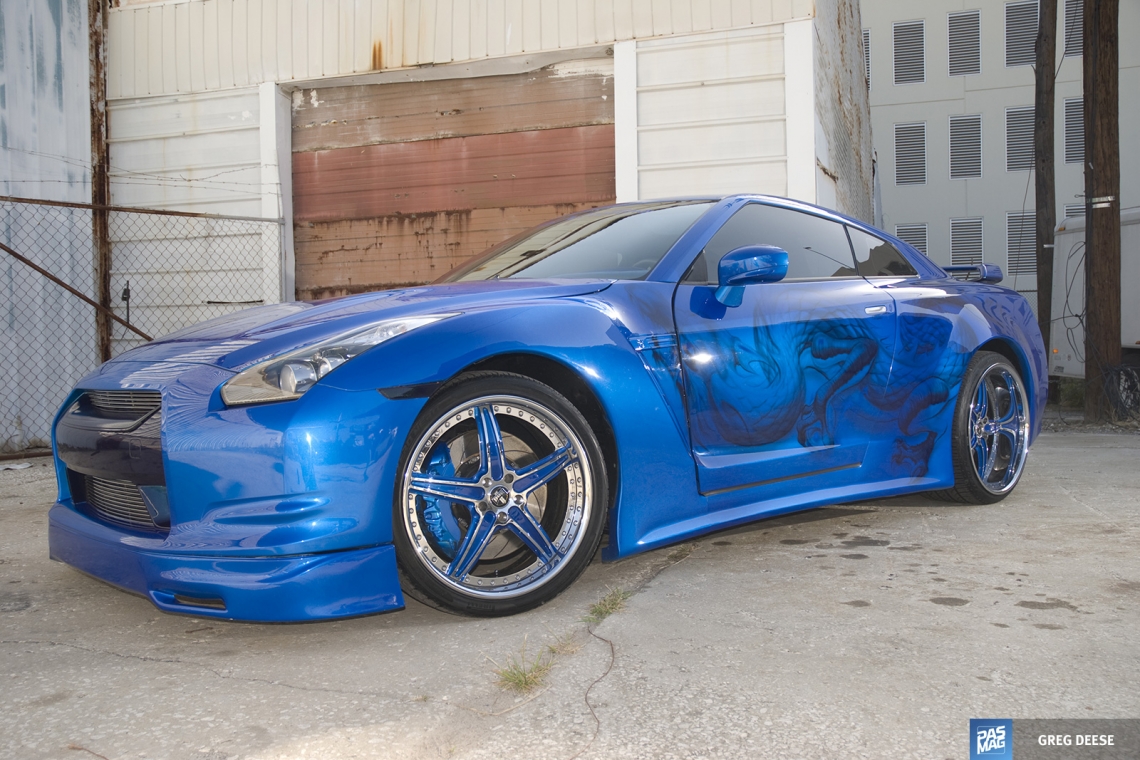 There are two types of car customizers on the scene today. One is show and the other is of course, go! In many cases, with the technology available today you really can have both all wrapped up in a single package. You can have a powerful and capable vehicle but it also needs to look hot to get noticed.

Case in point, T&A Customs has taken a stab at having the best of both camps. In South Florida you have to have loads of show and the boys at T&A did not disappoint in that department. In what might cause some controversy, they rolled with a full custom paint scheme for the GT-R that included some very intricate airbrushing. Before the spraying started, a custom metal widebody was fabricated at T&A and the entire car was shaved smooth. From there, they fitted up some motorized Lambo doors to impress the ladies. Then the painting began at the hands of technician Louis Lopez in a special Oriental Blue. The paint included six coats of candy and four coats of clear for a stunning finish. The airbrushing was done by a man only known as ‘Tennesse’ who integrated both GT-R and Japanese dragon motifs on the car along with the requisite smoke graphics. 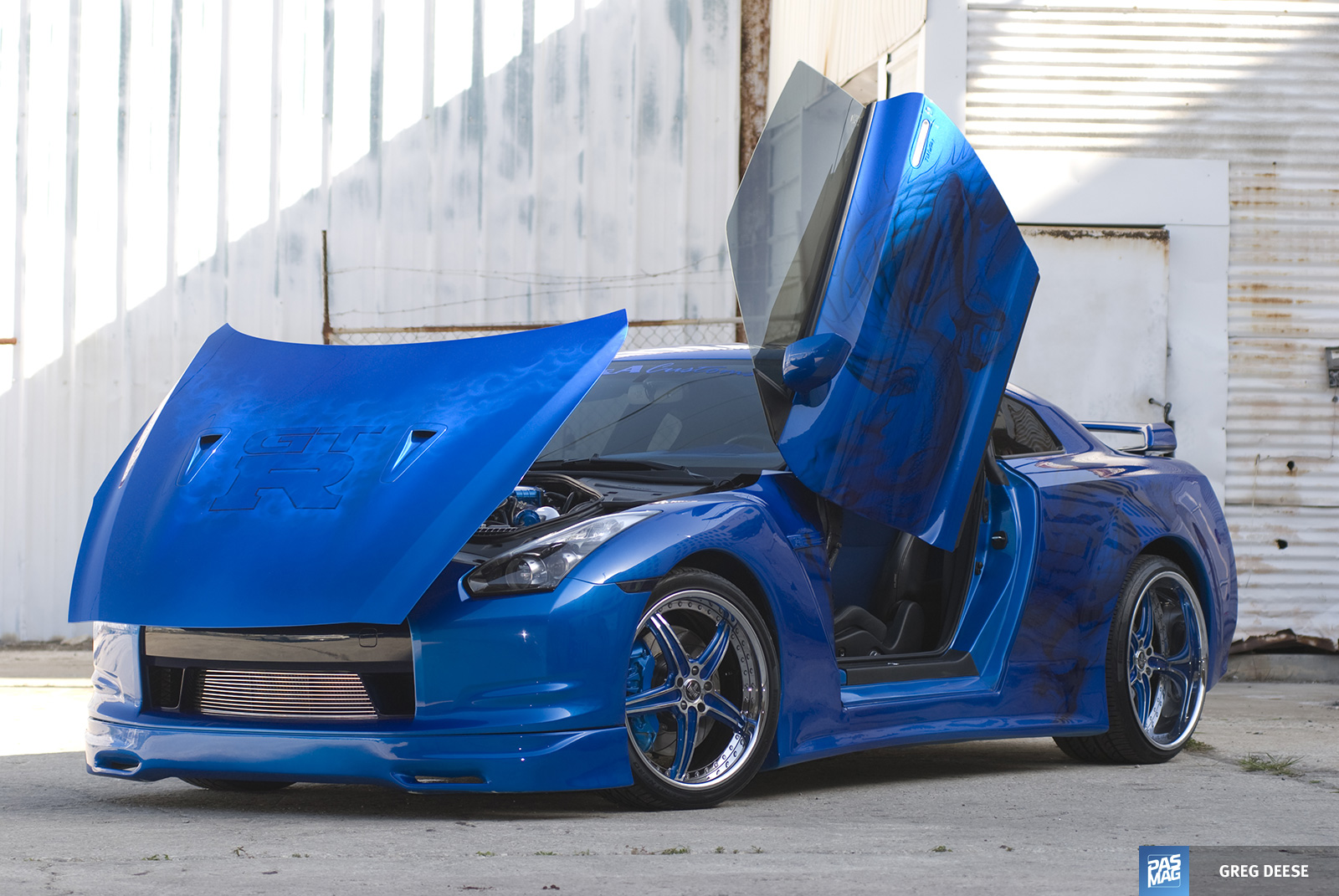 Attention turned to the rollers, which could now be sized much larger than stock. MHT was called up to supply a set of their Dub Series III wheels in a 21x9.5-inch front and a shocking 22x12.5-inch in the rear! Only the best rubber would do for a machine this capable and T&A ended up with 255/35R21s up front with 315/25R22s in the back making this easily the largest tire we have seen put under the new GT-R! 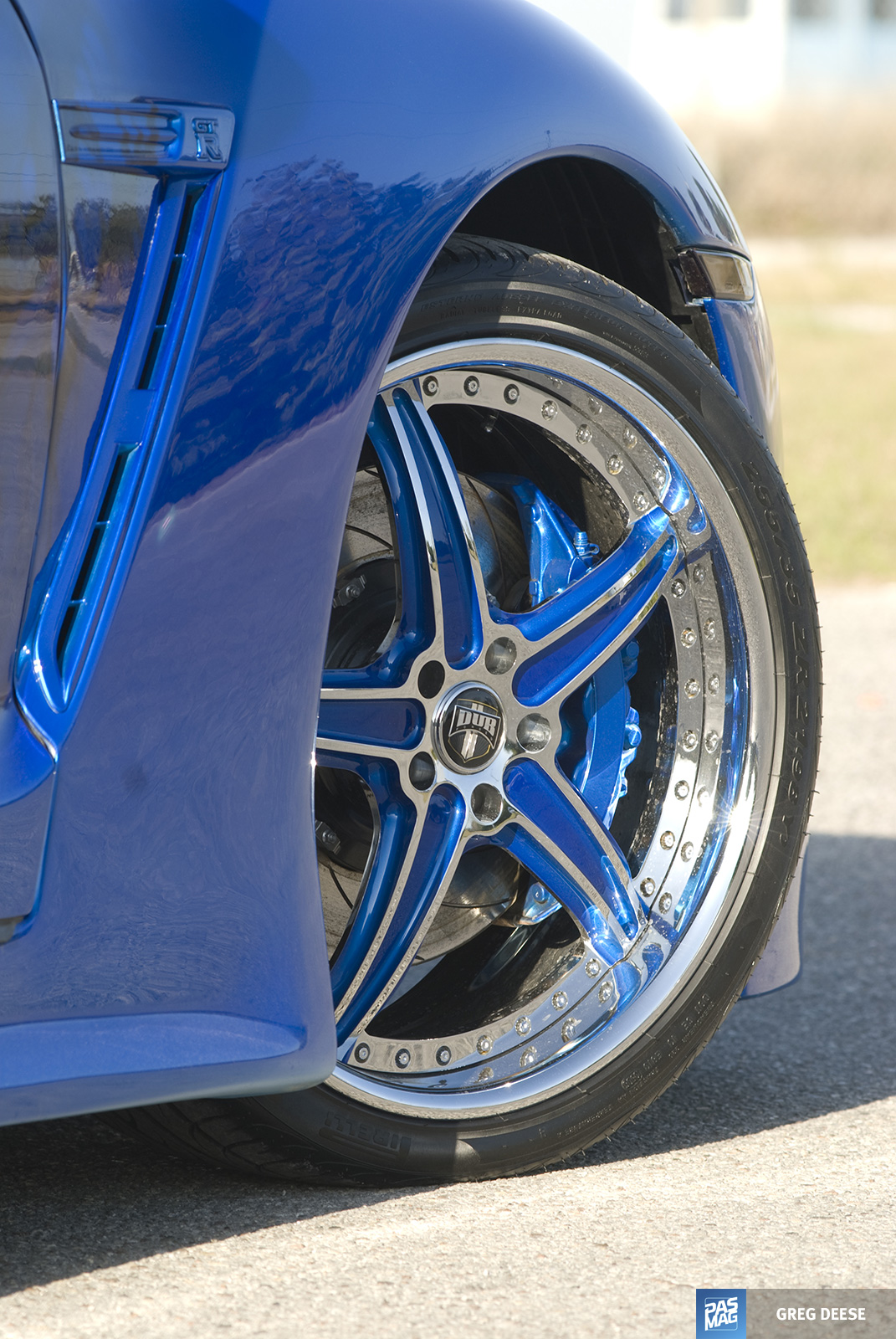 To achieve the right stance, T&A spent some time researching their options. They arrived at Cobb Tuning who has been tearing up time attack events with their Nissan R35. So on all four corners, they sleeved in a set of Cobb’s fully adjustable coilovers. The brakes are color-matched but they are also the stock-equipped Brembo units because 4-piston/15-inch all around are more than enough and certainly nothing to scoff at. 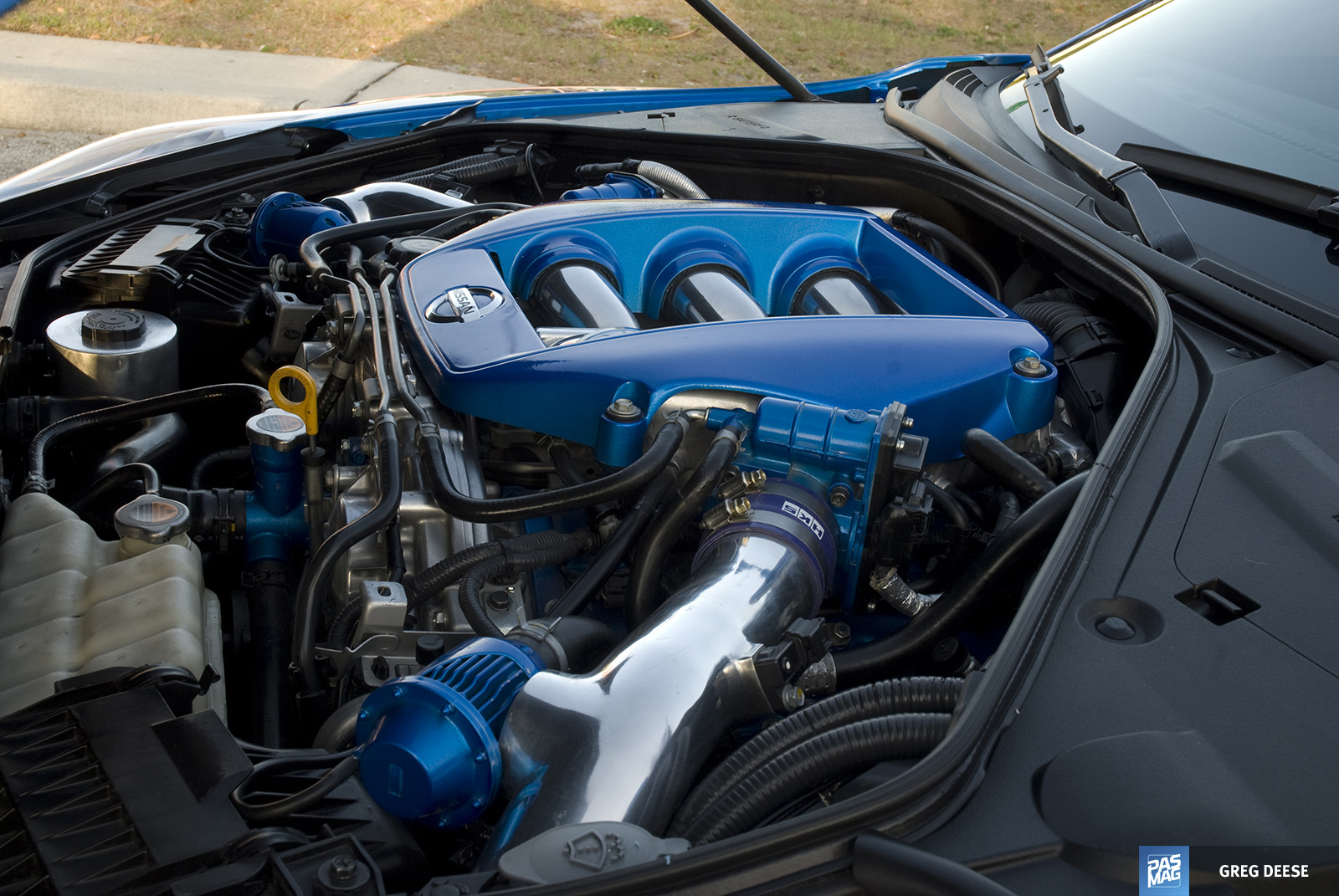 The attention turned to the go-fast goodies where the twin turbo 3.8L was going to get a shot in the arm. After the heads were ported and polished by Rusty’s Head, T&A Customs opted to install the GTRR 700 turbo upgrade kit. They added some gear from HKS including twin SSQV blow-off valves and one step colder plugs. No GT-R is complete without a step up in the exhaust department and they decided to go with Mine’s Ti system complemented by Mine’s downpipes. 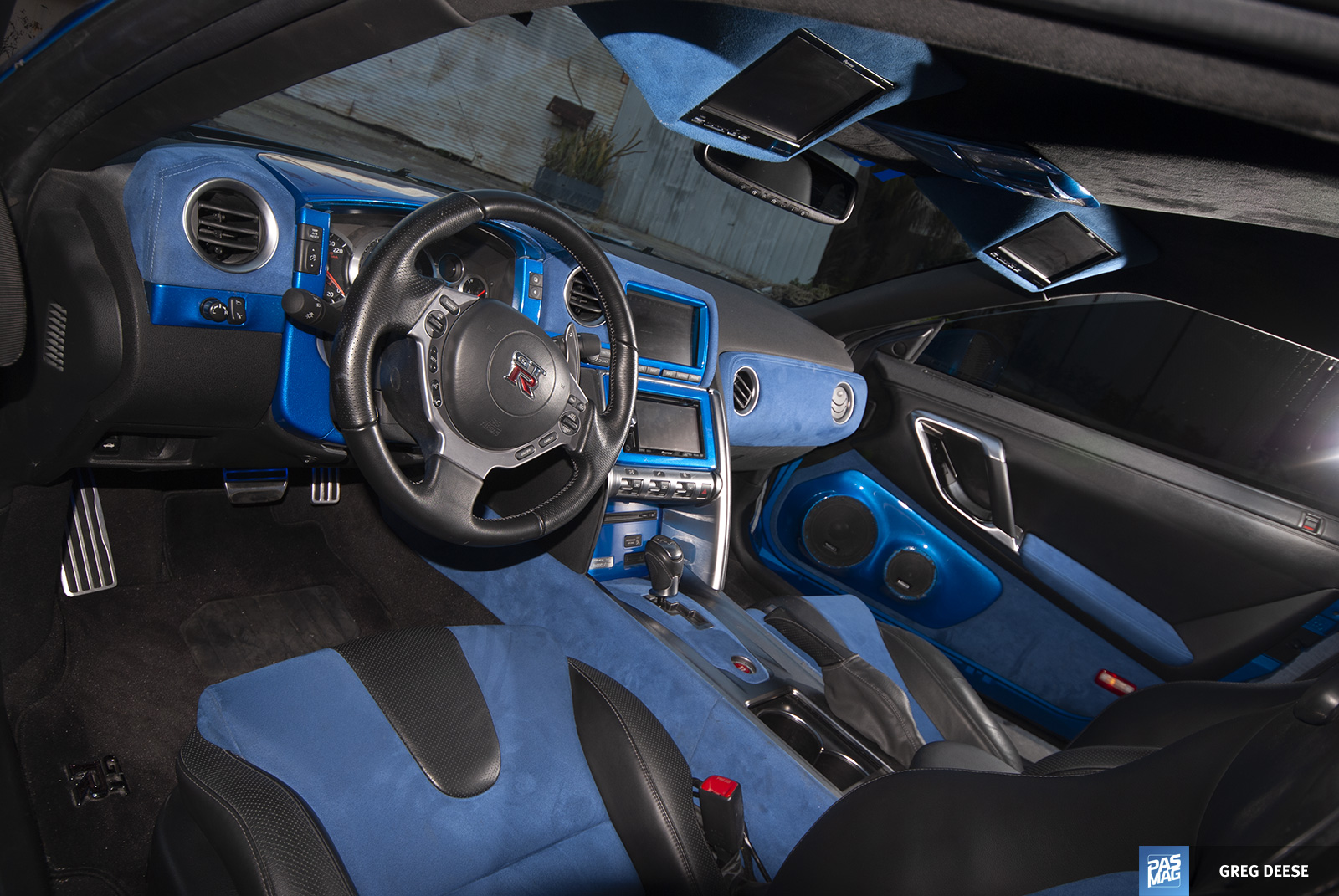 With the majority of the work out of the way, the team turned their attention to the entertainment. When you have 700hp underneath the hood, you don’t mind having some luxuries and multimedia onboard. Well T&A added a lot! The dash has been fiberglassed to accommodate a Pioneer AVIC 900BT LCD unit to control the audio assault. The wattage is provided by MMATS competition-grade gear. The lows are belted out from MMATS 2100.5 amp that feeds a pair of MMATS P3.0 10-inch subs firing towards the cabin. The subs are encased in fiberglass enclosures which are color matched to the exterior of the car. The amp racks are sunken flush with the trunk floor in the spare tire cavity. The other amp is a MMATS SQ4100 amp that drives the balance of the system and is composed of four MMATS 6.5-inch components. All of the components speakers are again sunk flush into the doors and the rear quarters in custom fiberglass housings color-matched with the exterior. The candy blue fiberglass was complimented by several panels recovered in blue suede. 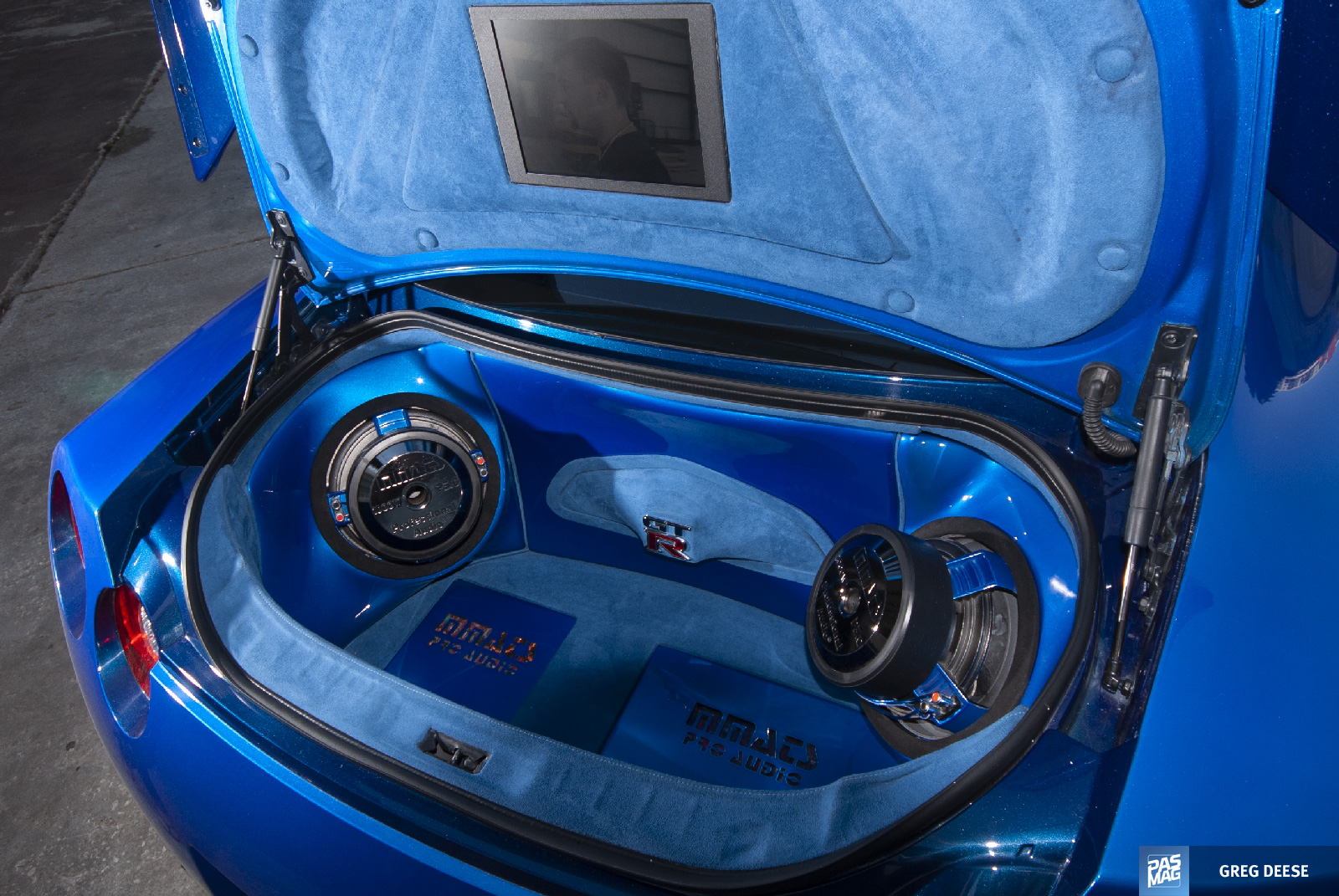 The system is ignited with Stinger .44 batteries up front and in the trunk. The fuses, distribution blocks and wiring are from the trusted experts at Stinger and keep the system lit up and performing at its best!

Looks, sound, performance … this Nissan GT-R truly has it all. Now that it has been unleashed, it is out there doing some damage in sound quality competitions. We might suggest you not sleep on the T&A GT-R, because its 480 OEM ponies have been multiplied by well, a lot. 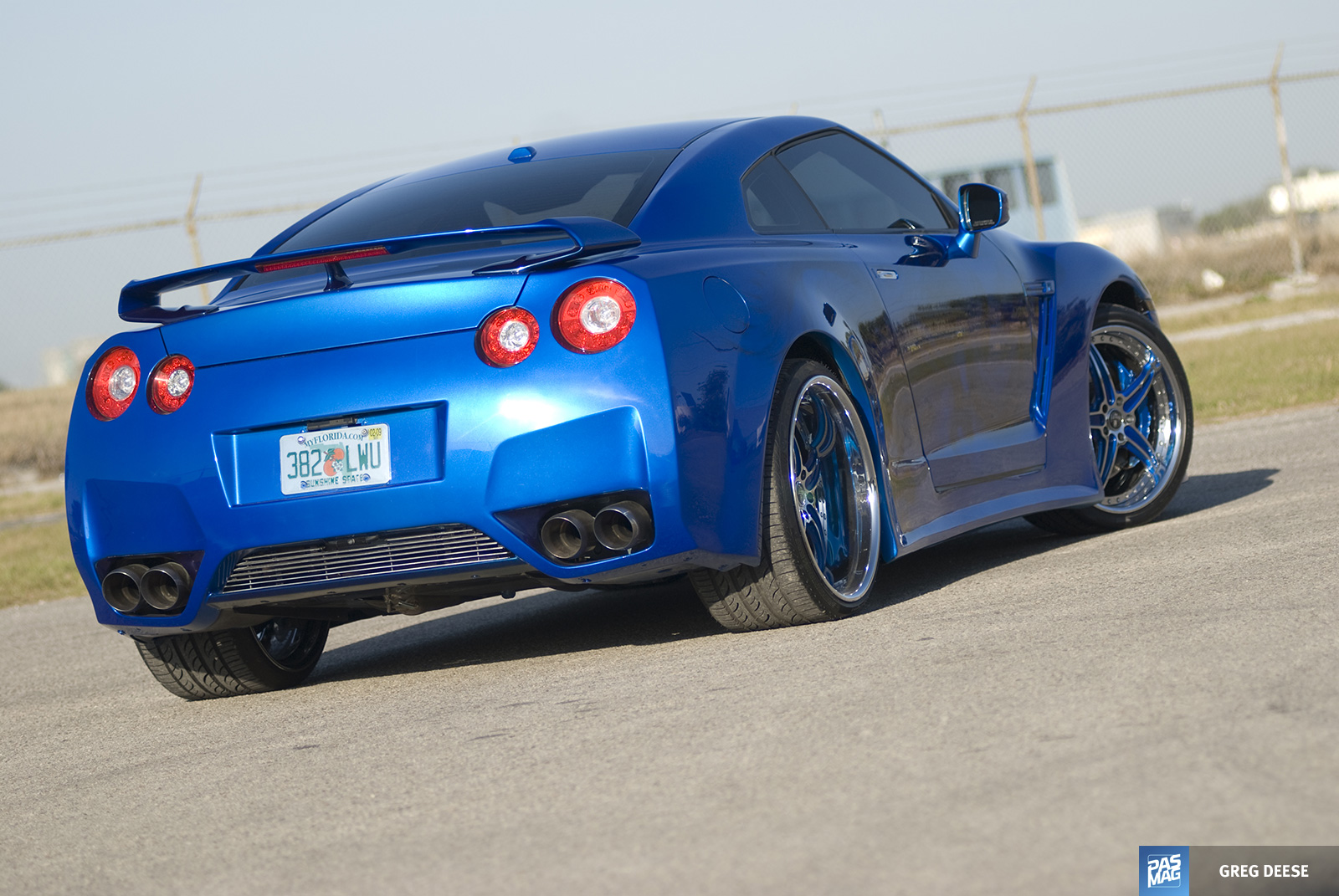 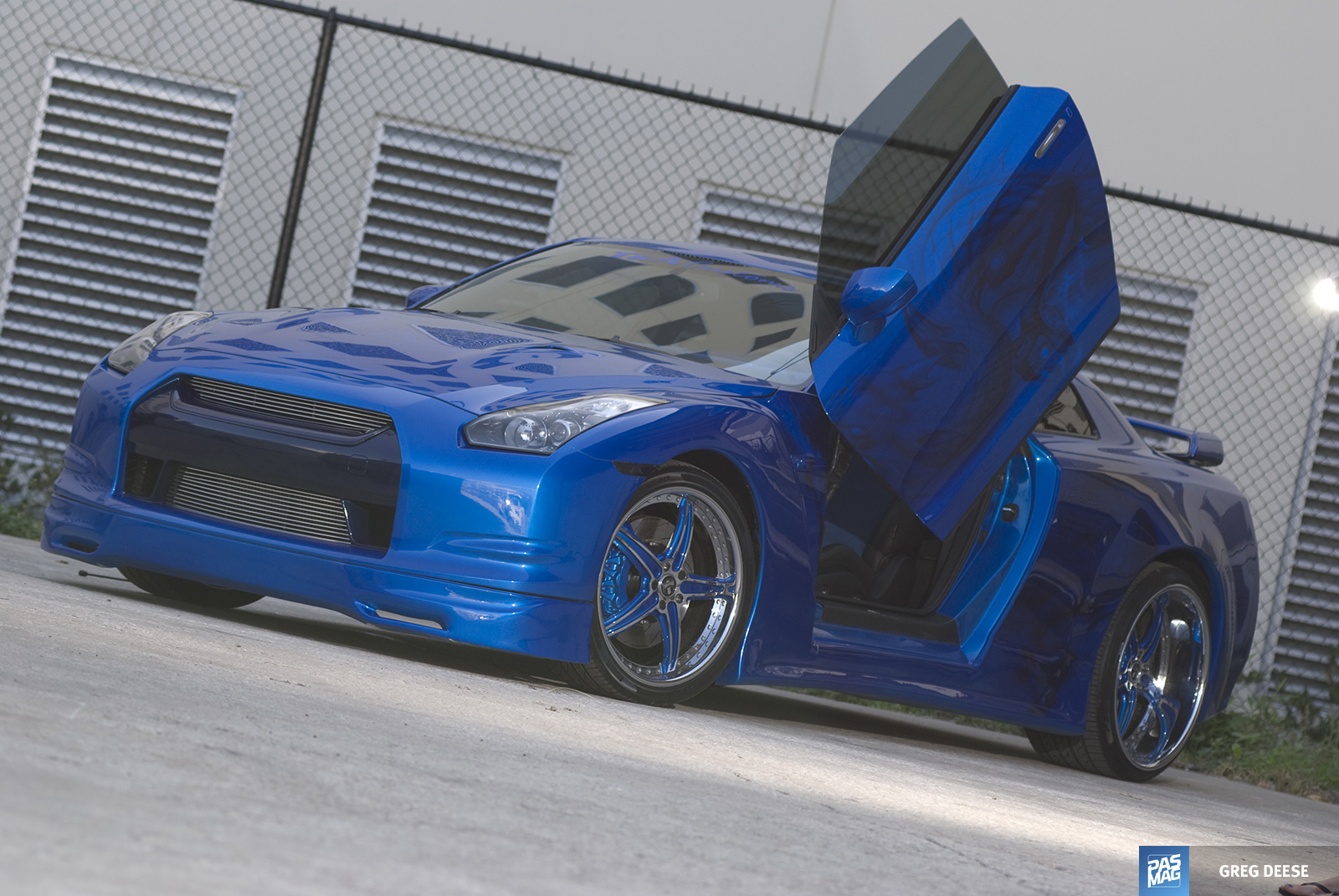 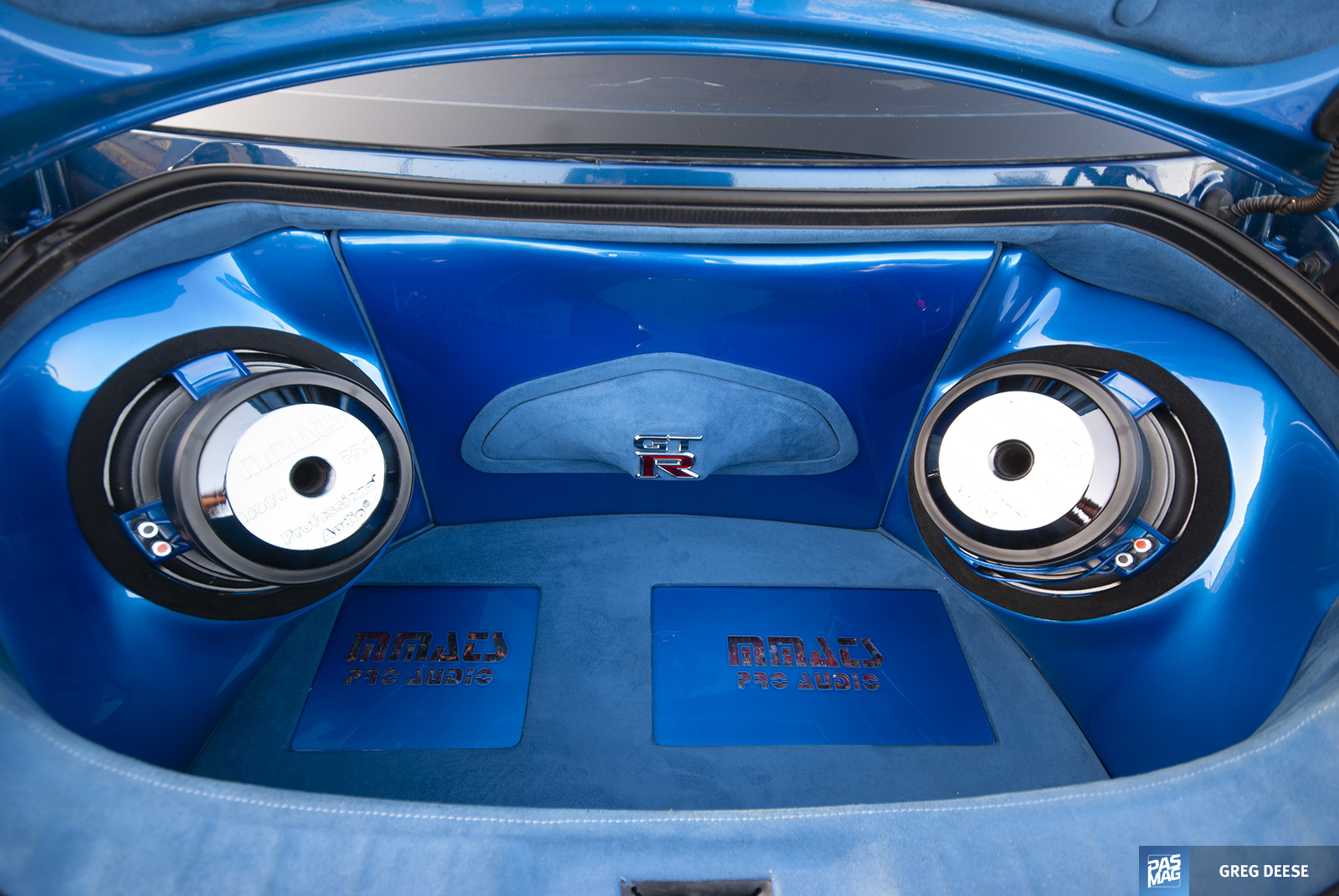 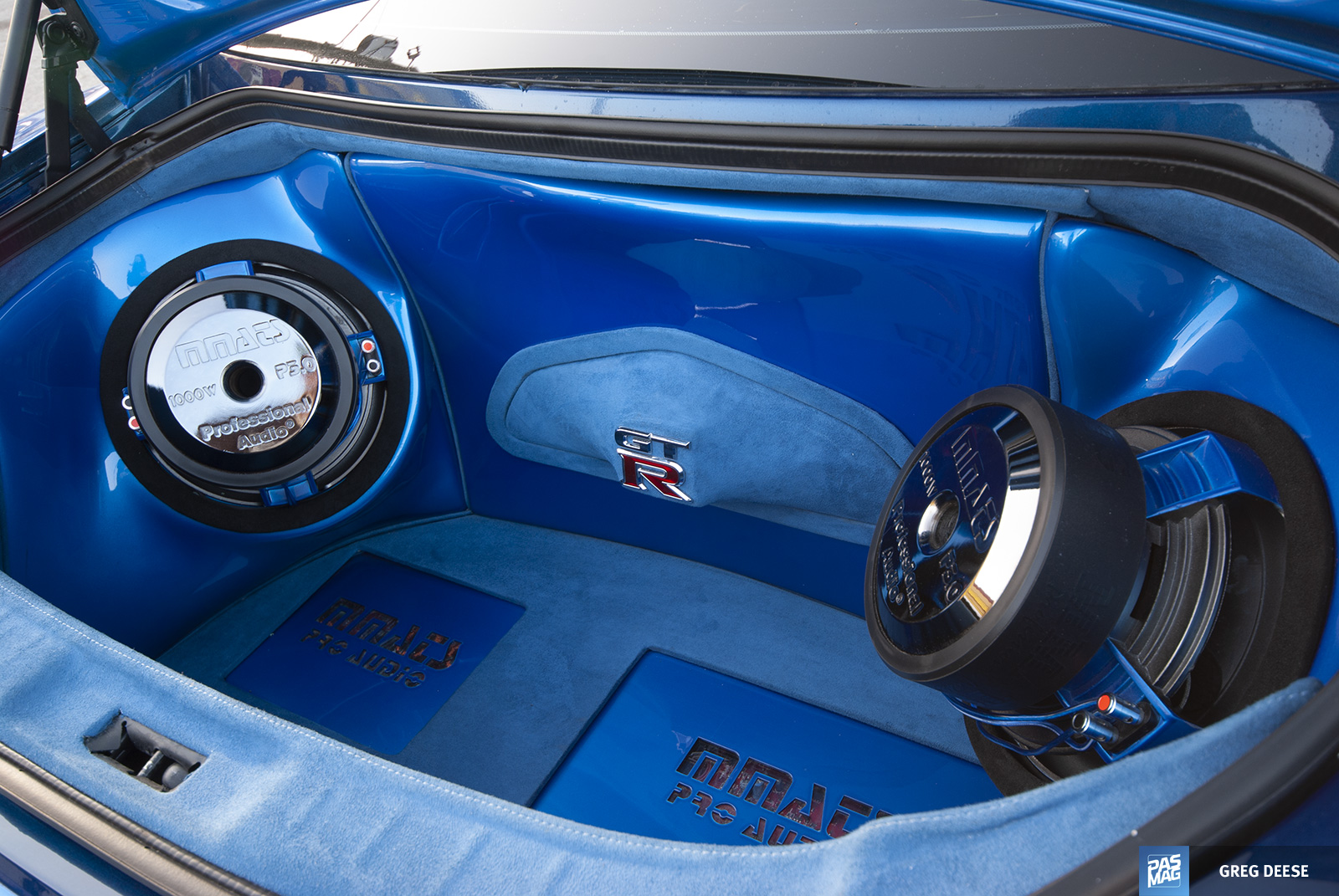 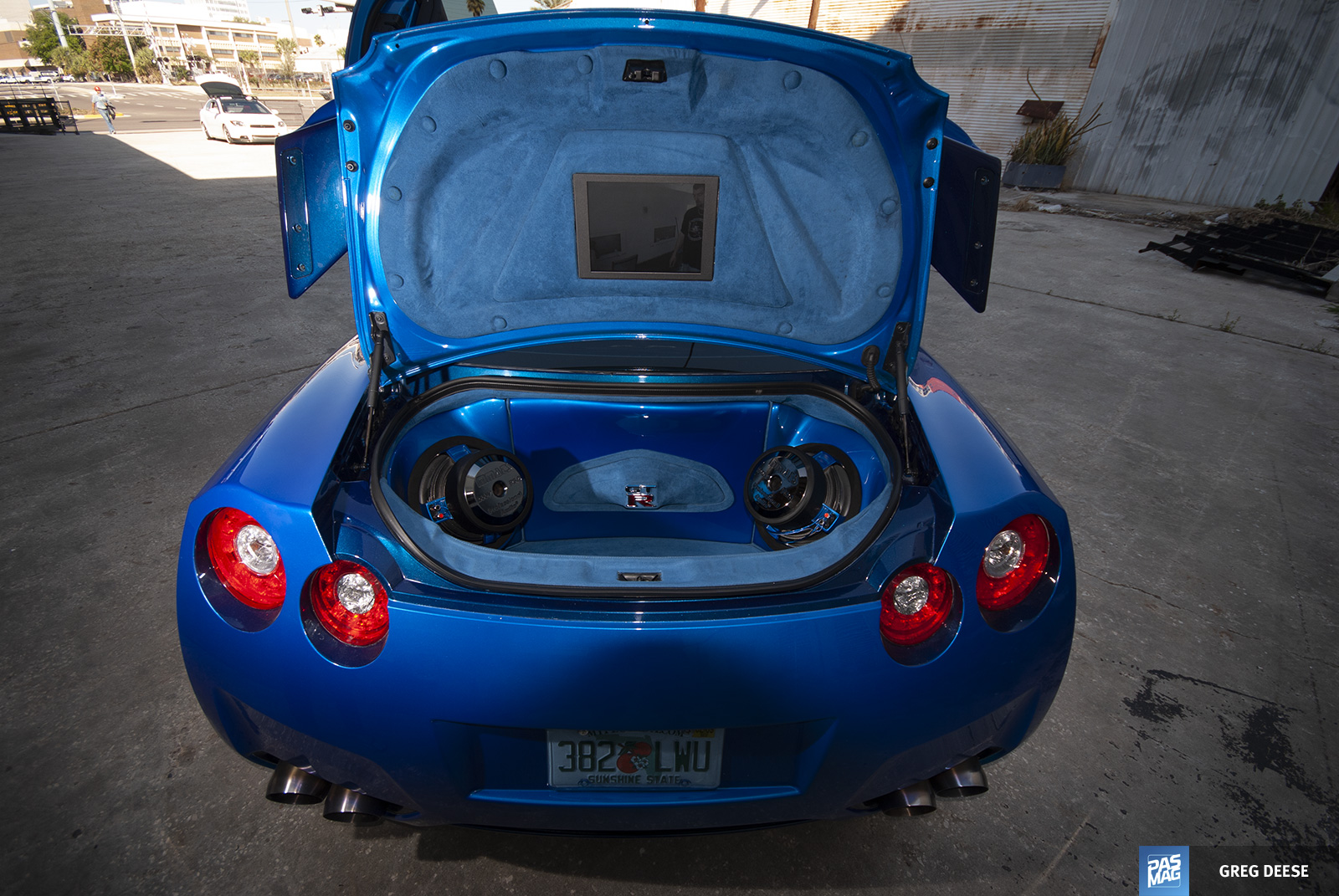 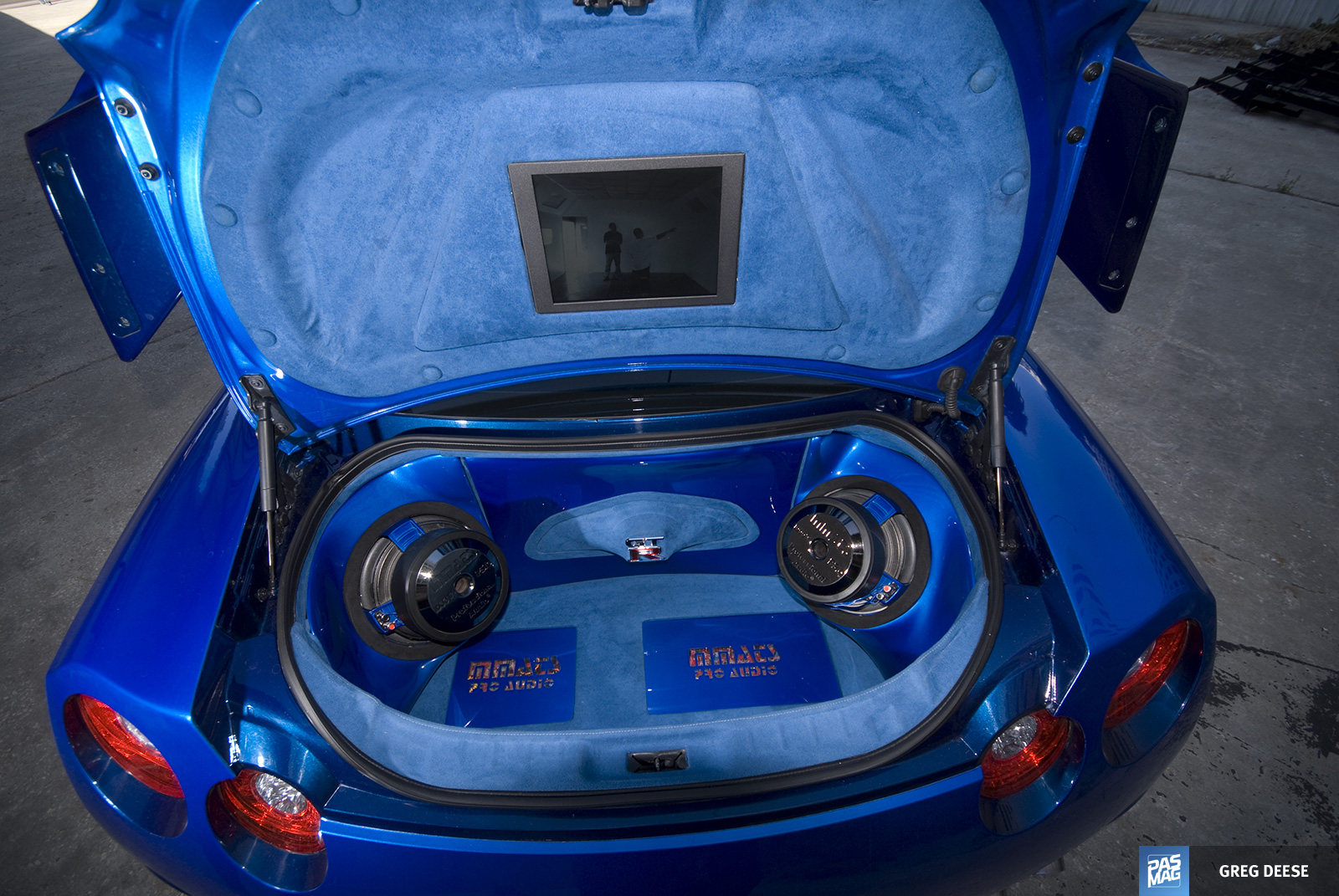 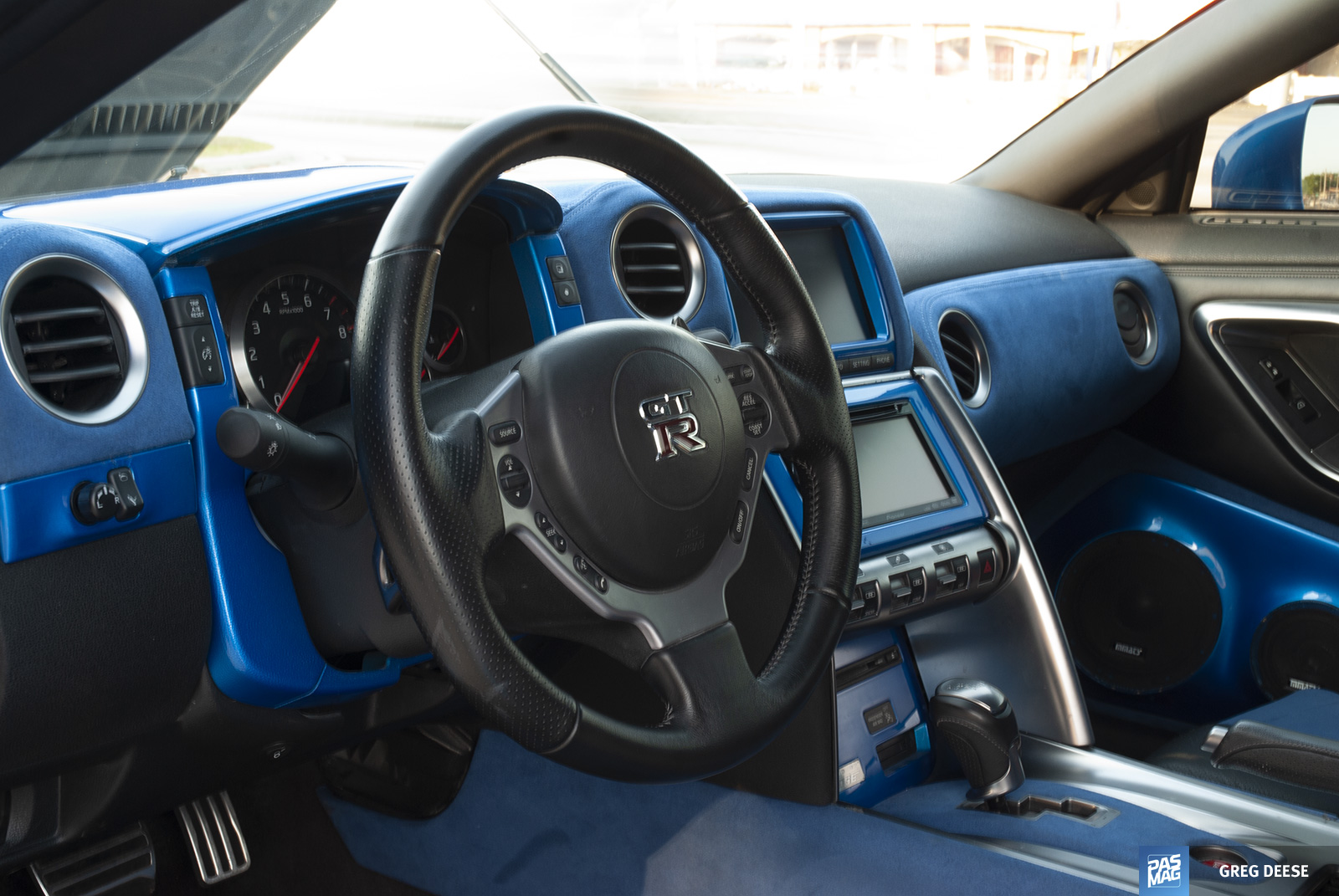 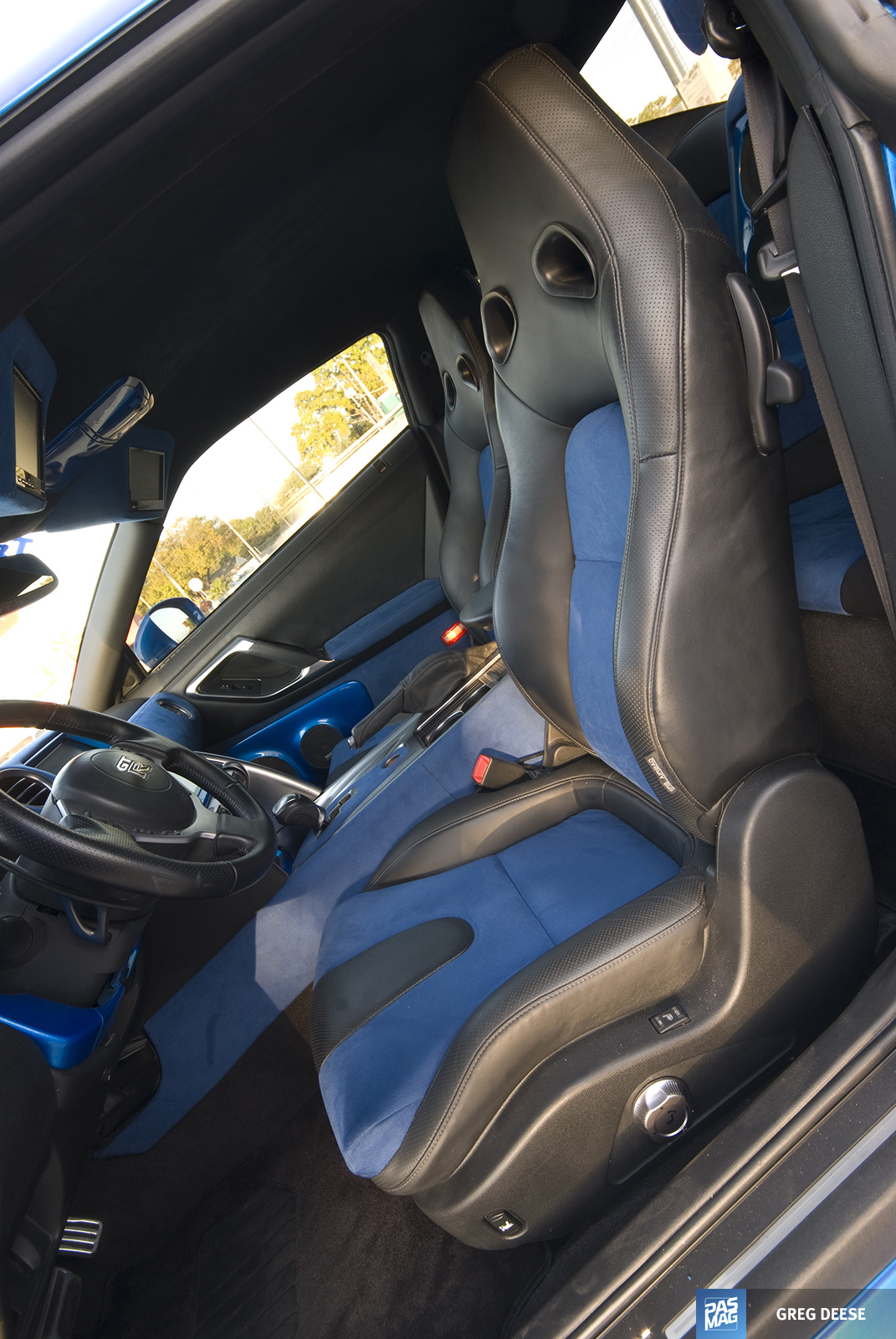 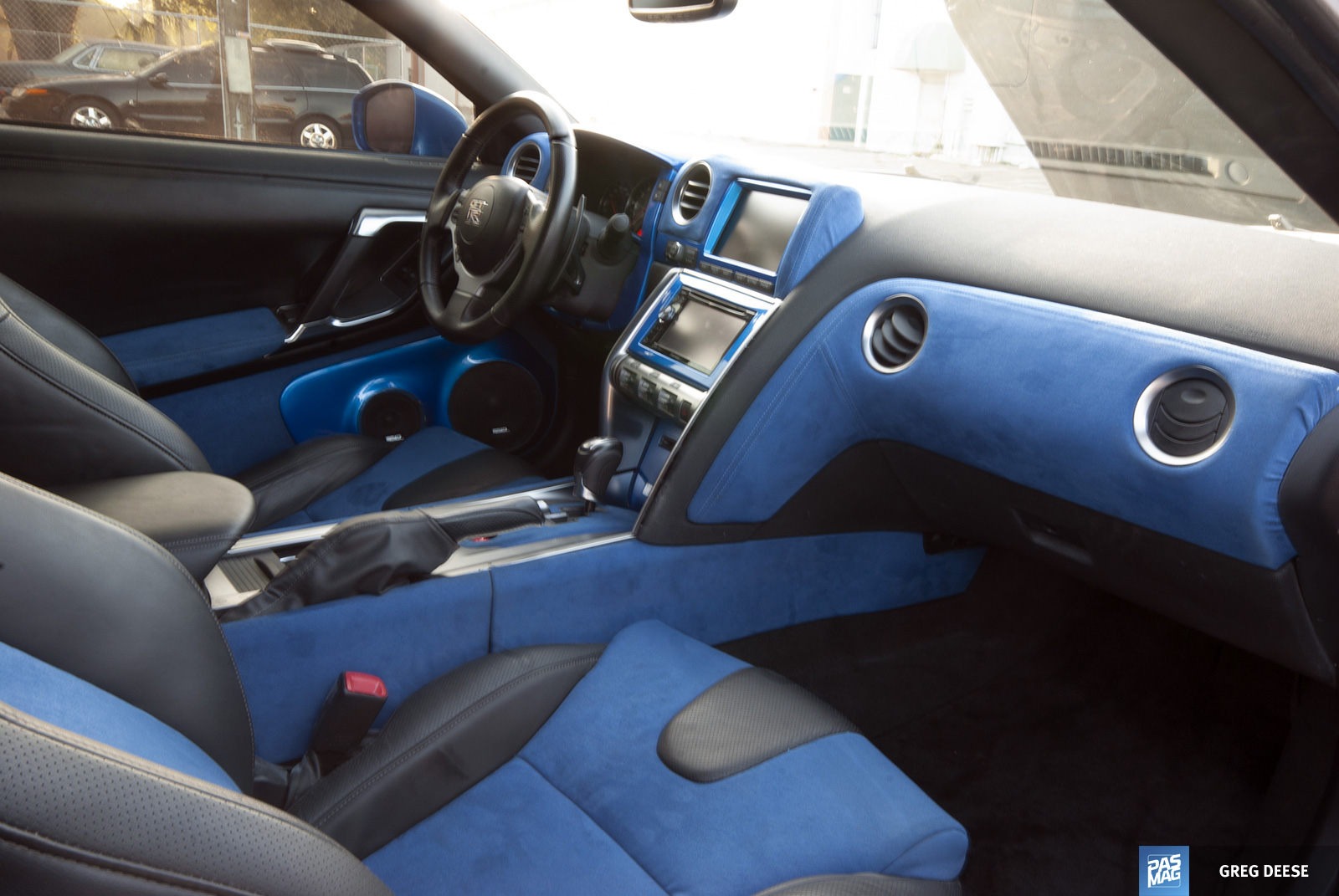 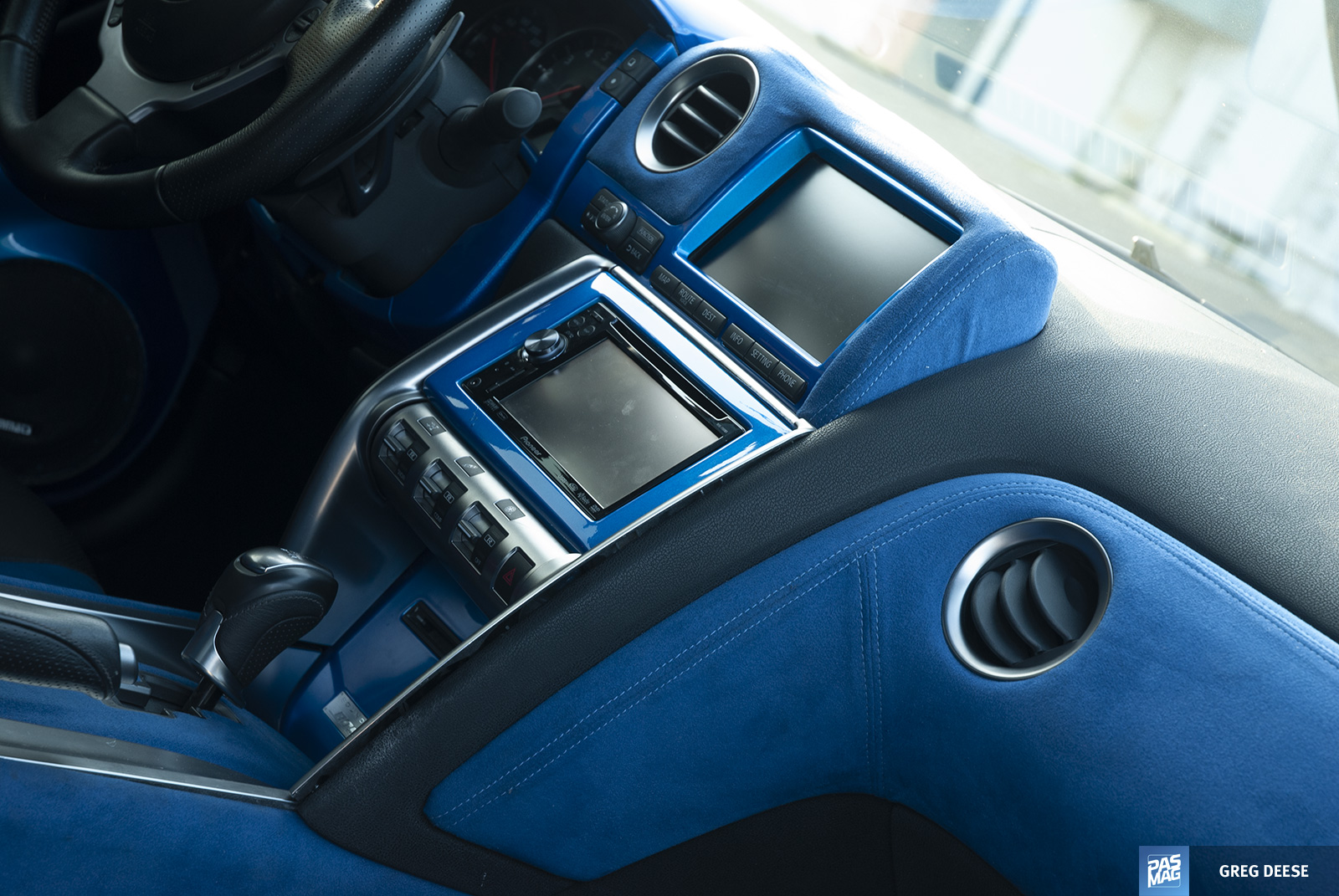 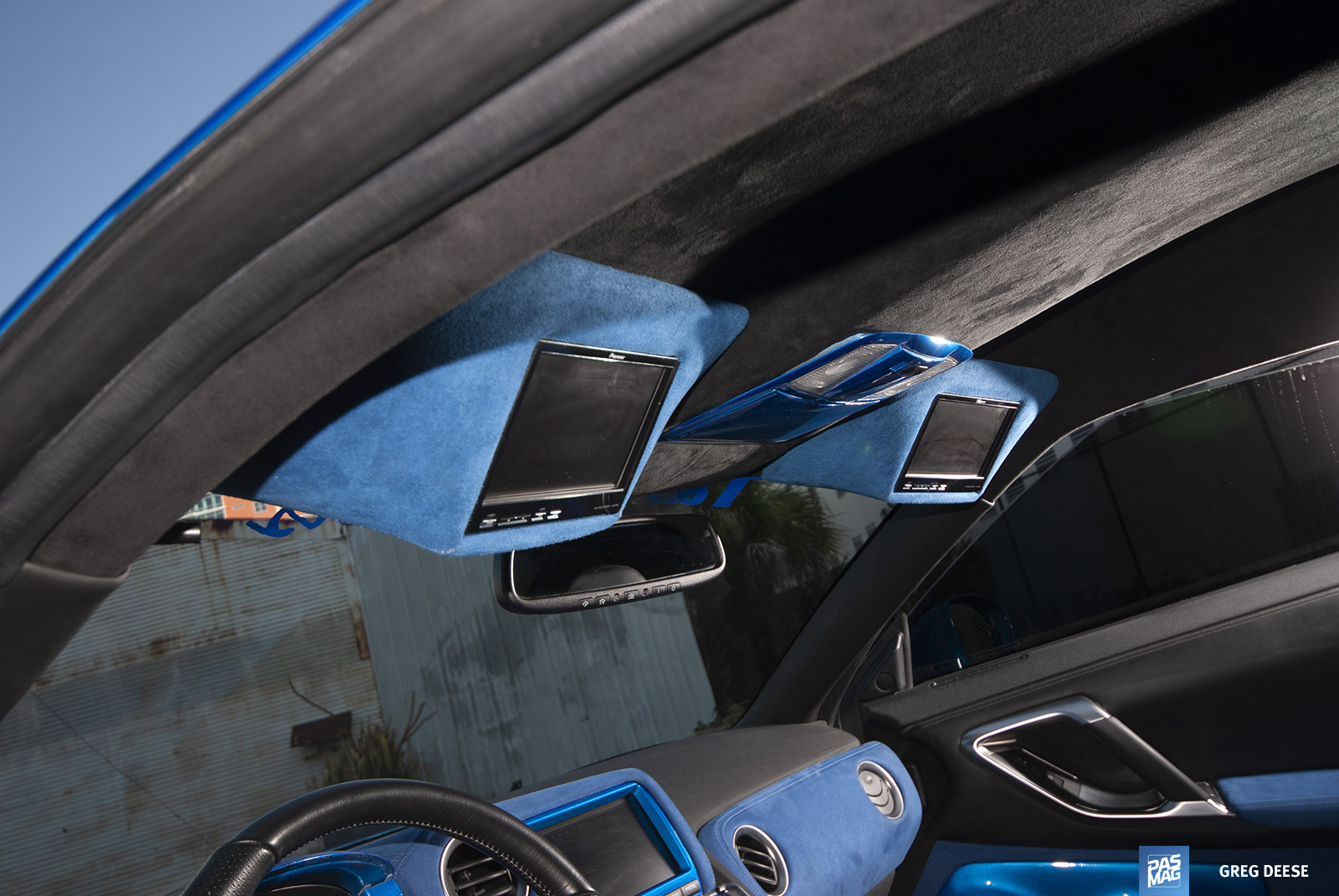 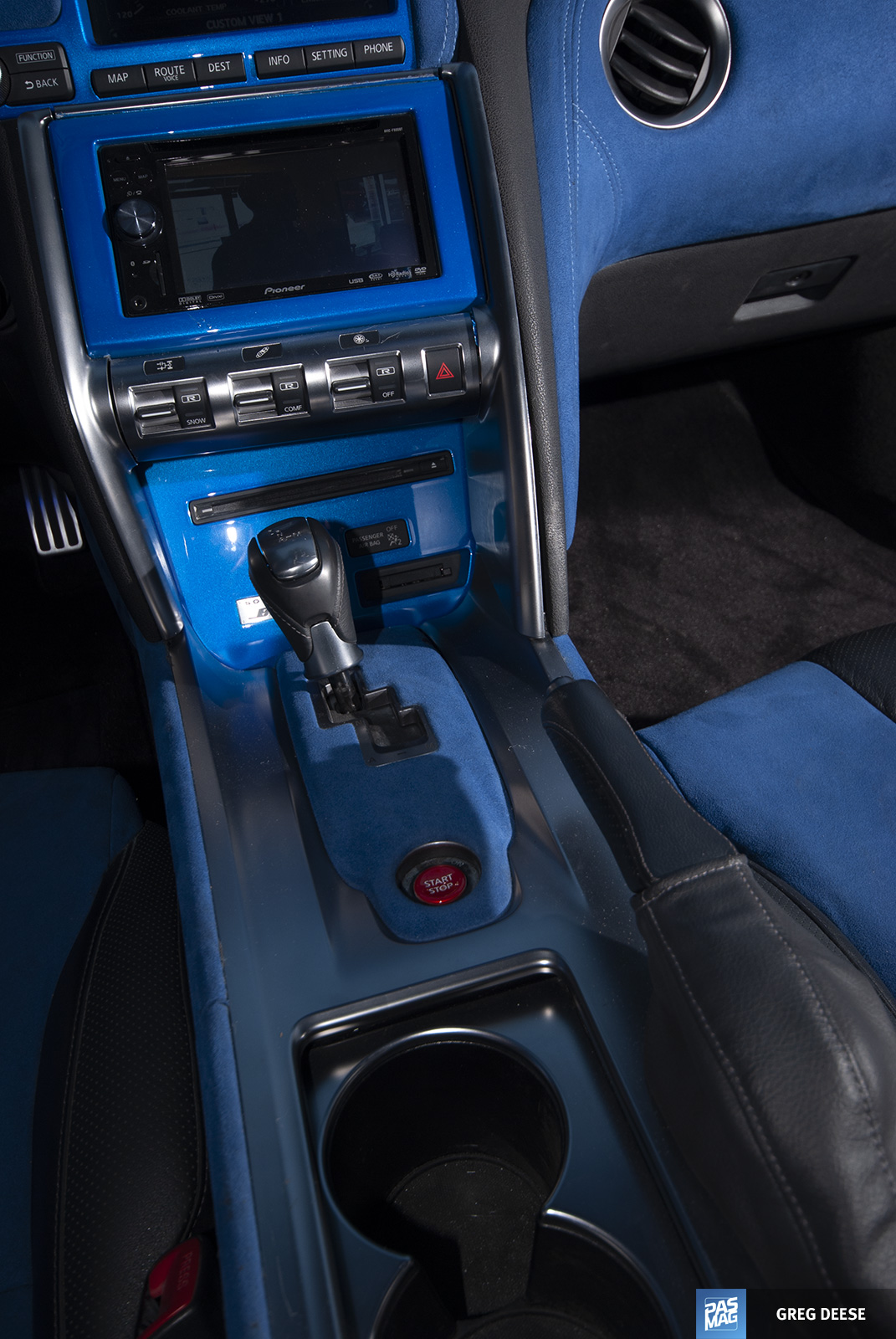 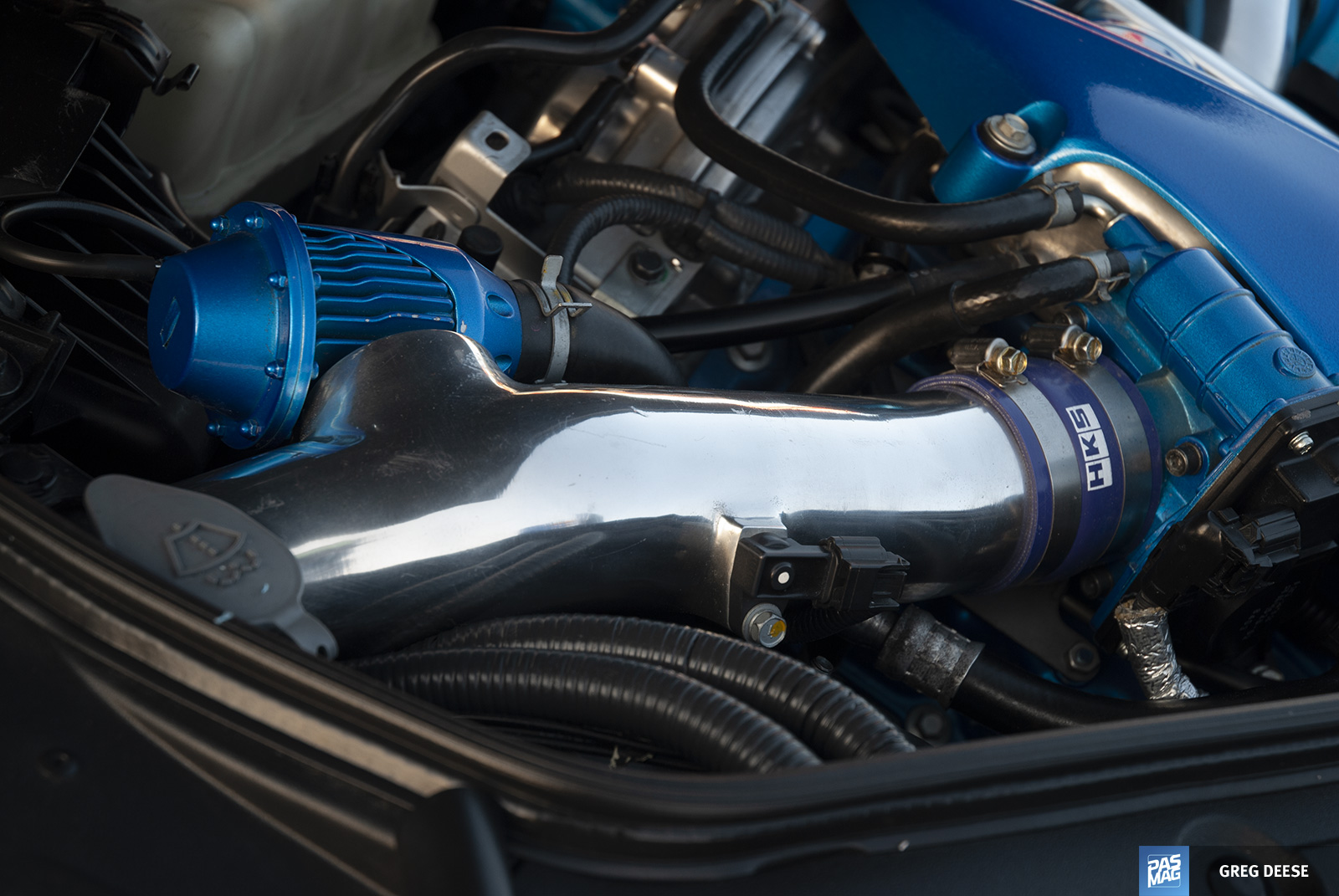 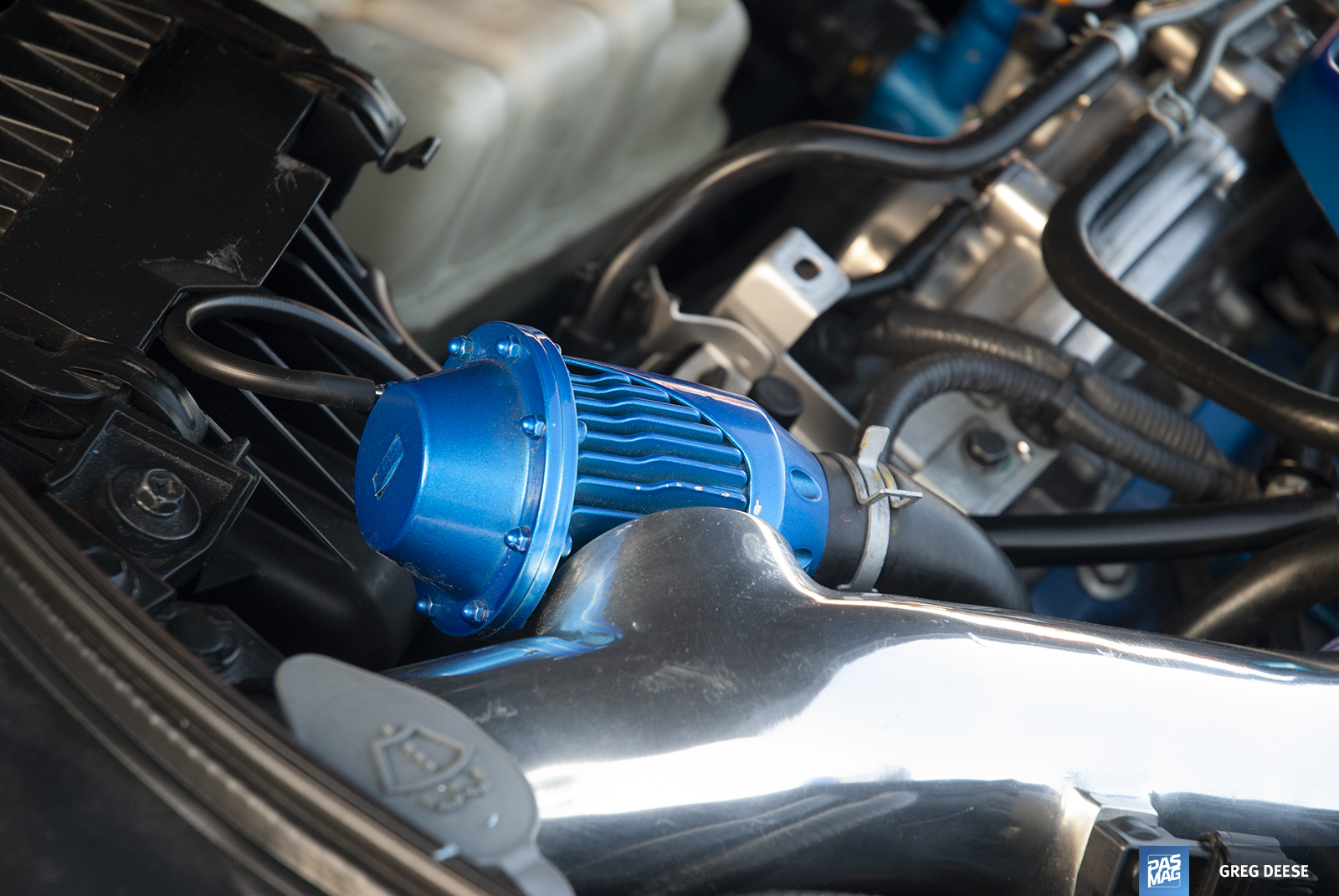 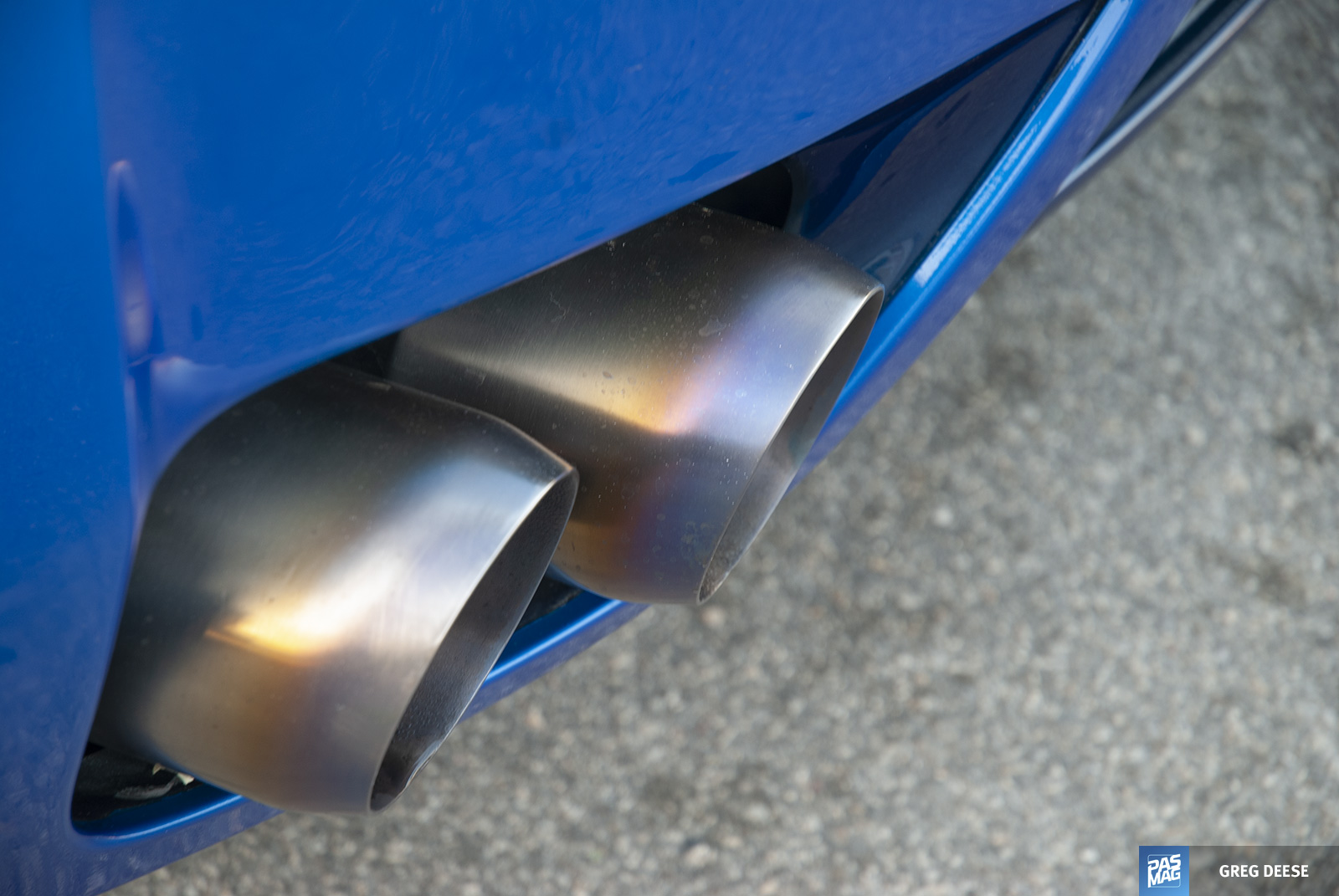 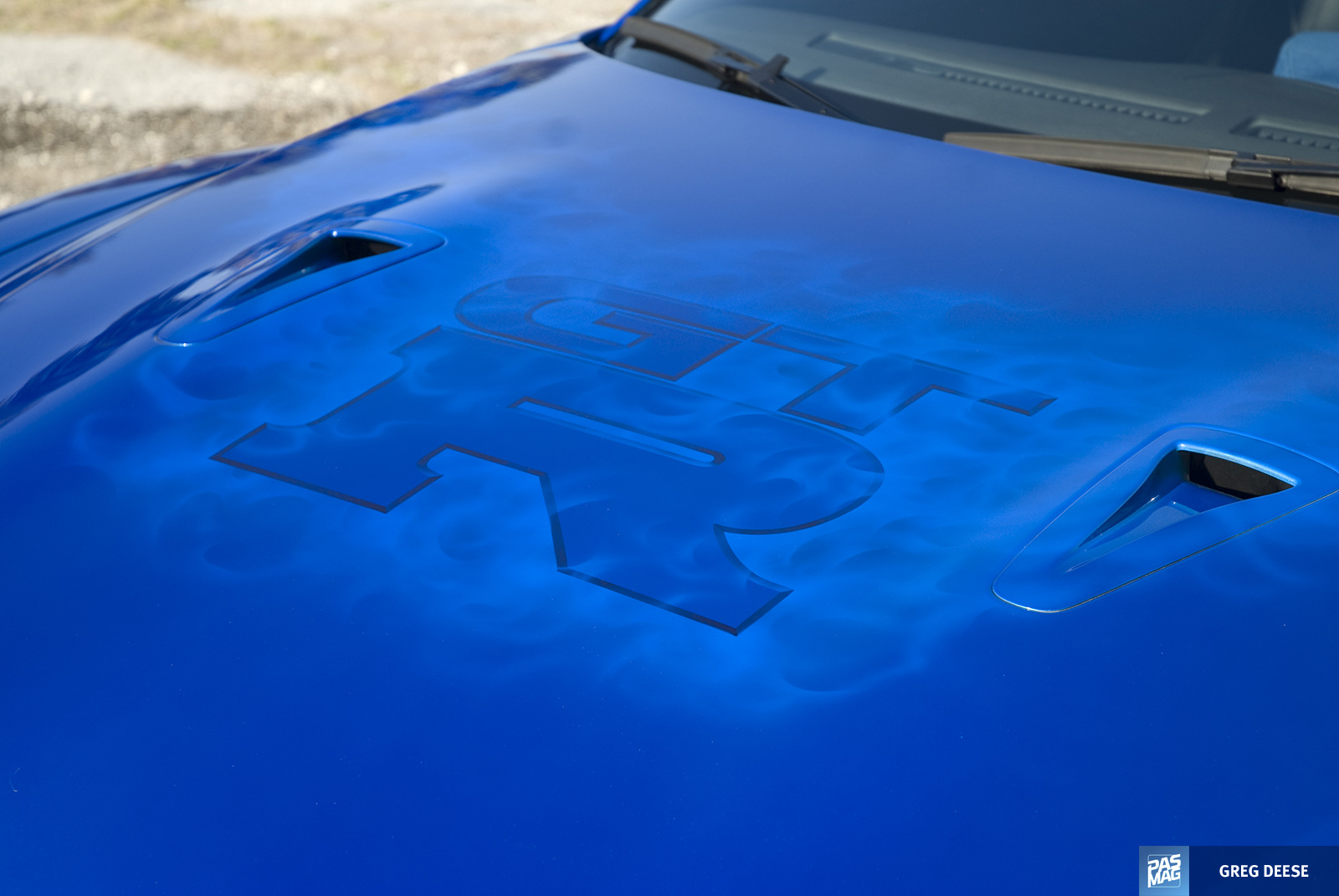 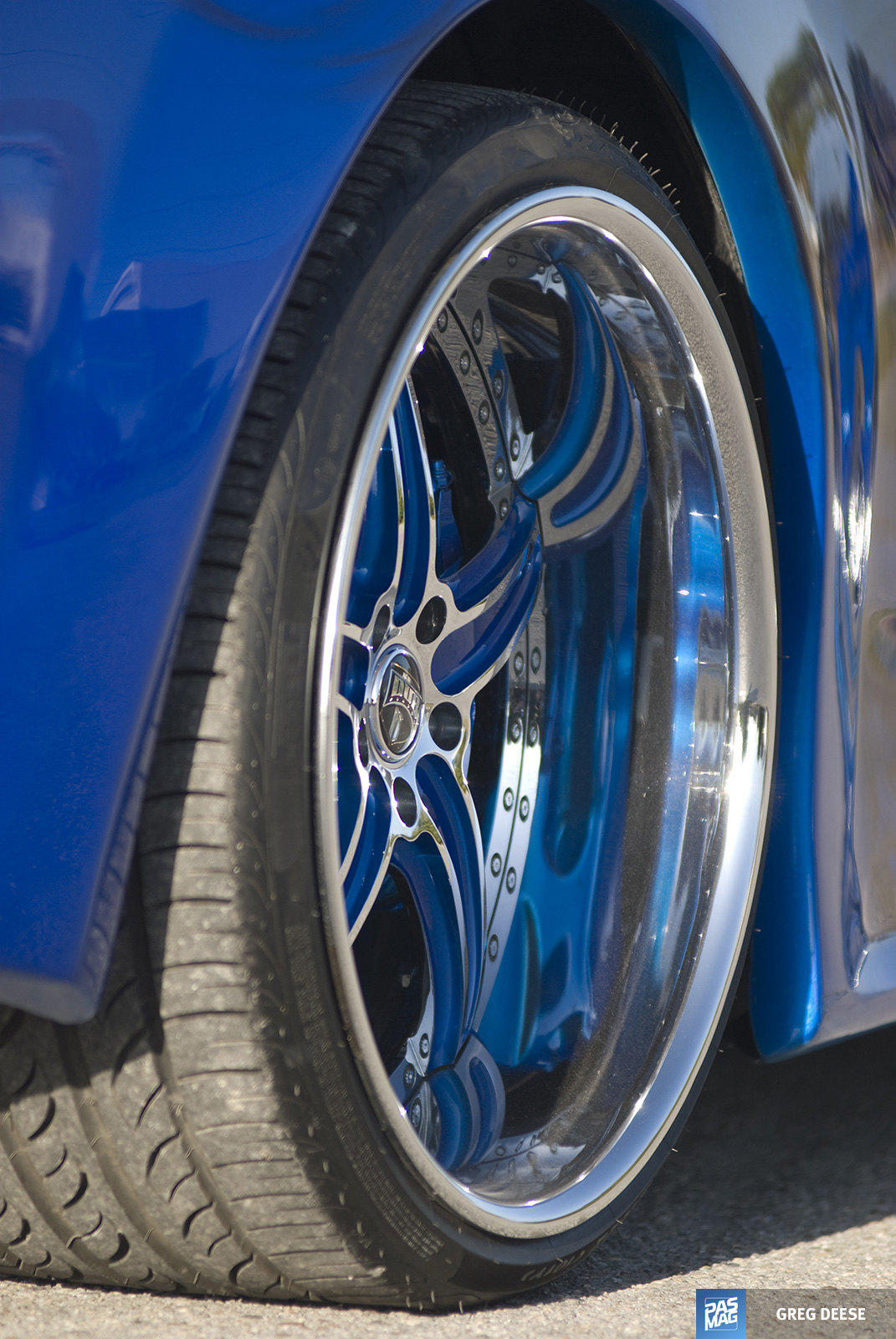 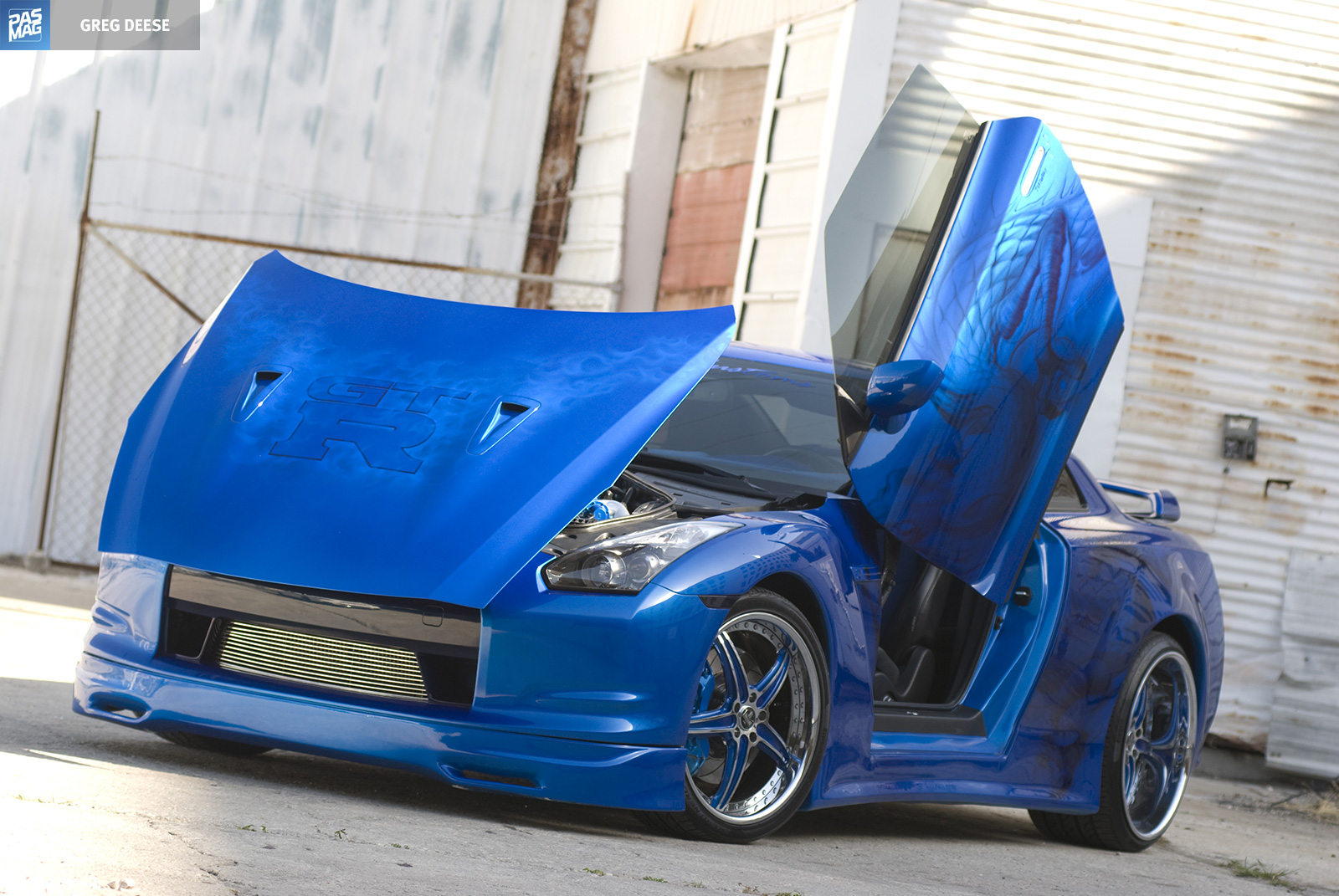