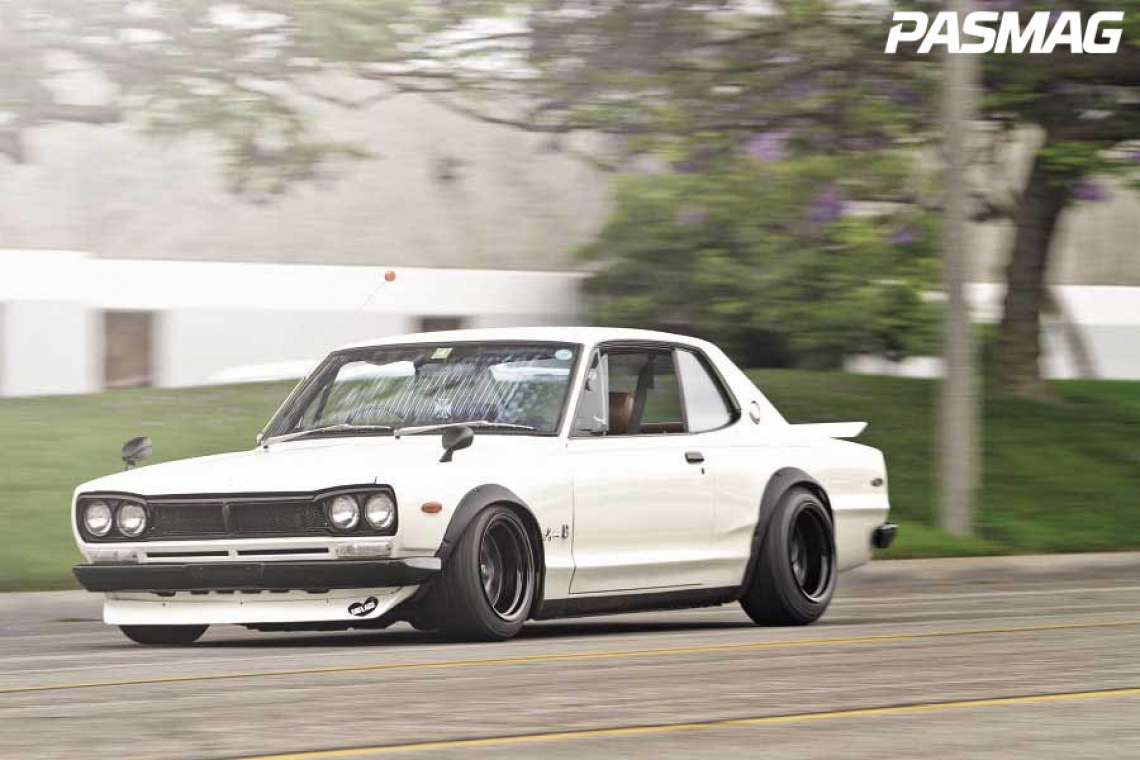 Nissan Skylines are considered to be unicorns of the car world, particularly in the U.S.

Never officially sold in North America before the R35 reprise in 2009, the brand was idolized by teens across the country through exposure in video games like Gran Turismo and Option videos throughout the 90s. They were dominant compared to any similar car of the generation. 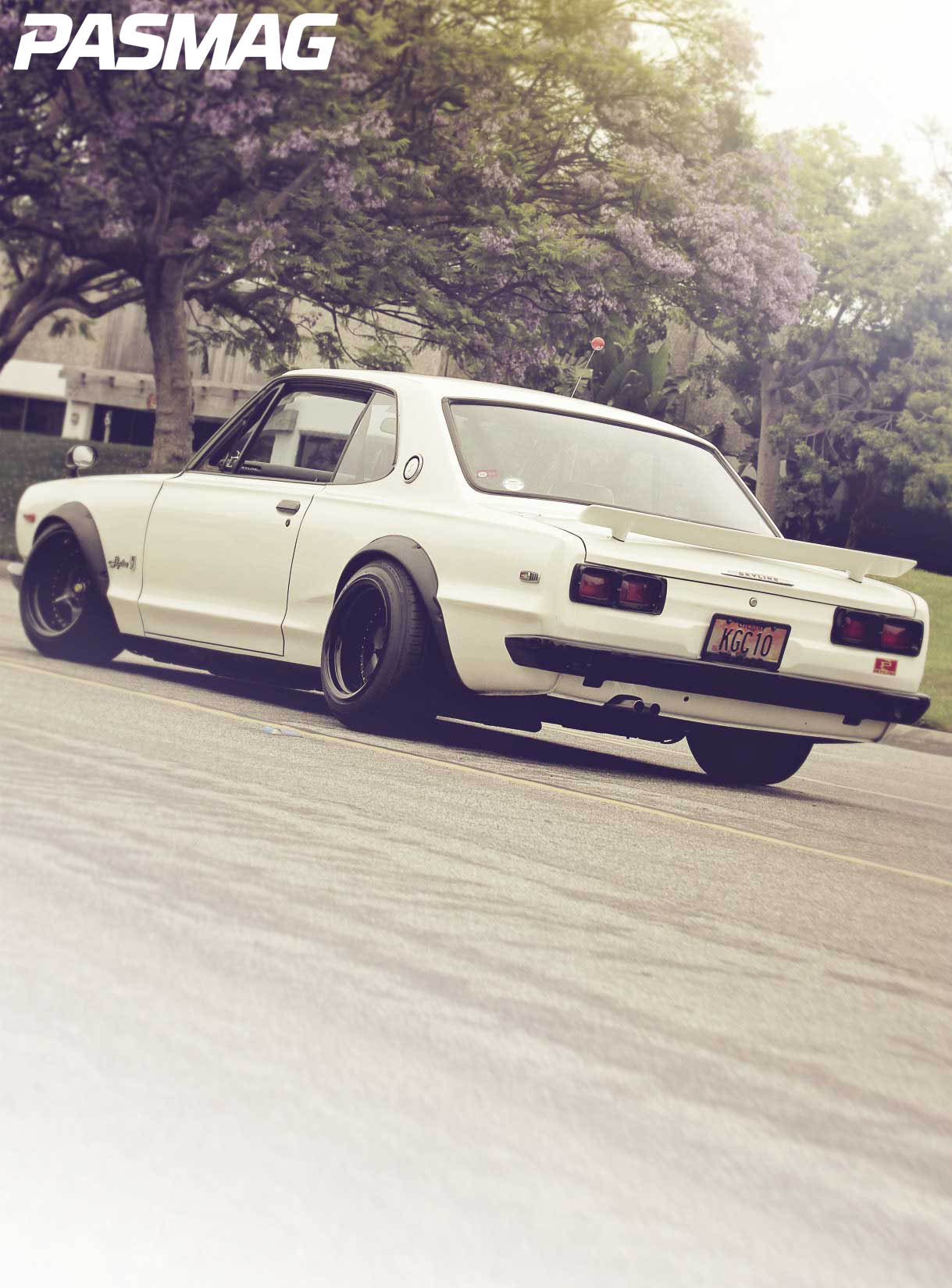 Dating back to the 1970s, the Skyline brand has long been one of the winningest brands of any manufacturer in racing. With U.S. import laws being very strict and limiting the ability for cars newer than 25 years to get imported into the country, it’s rare to see a Nissan Skyline on the streets. While the 25-year rule allows cars to be imported without any major updates for crash testing or emissions laws, it’s rare to find an enthusiast who is interested in spending the big money to bring an old car over that is loud, slow, likely rough around the edges, with presumably more headaches than heroics.

Enter Mark Arcenal, creator of Fatlace and the associated family of brands. All of our readers have likely heard of Hella Flush, illest, or Slammed Society as brands. All of these were the creations of one man. A self-professed collector of everything, Arcenal has a current collection of cars that rivals many people’s entire car history. From Porsche to Audi to Nissan to Volkswagen, from cars built in the 60s, 70s, 90s, and 2000s, his collection is oddly unique. No stranger to cars that have graced the pages of magazines, this car is by far Arcenal’s simplest, but also the car with the most storied lore. 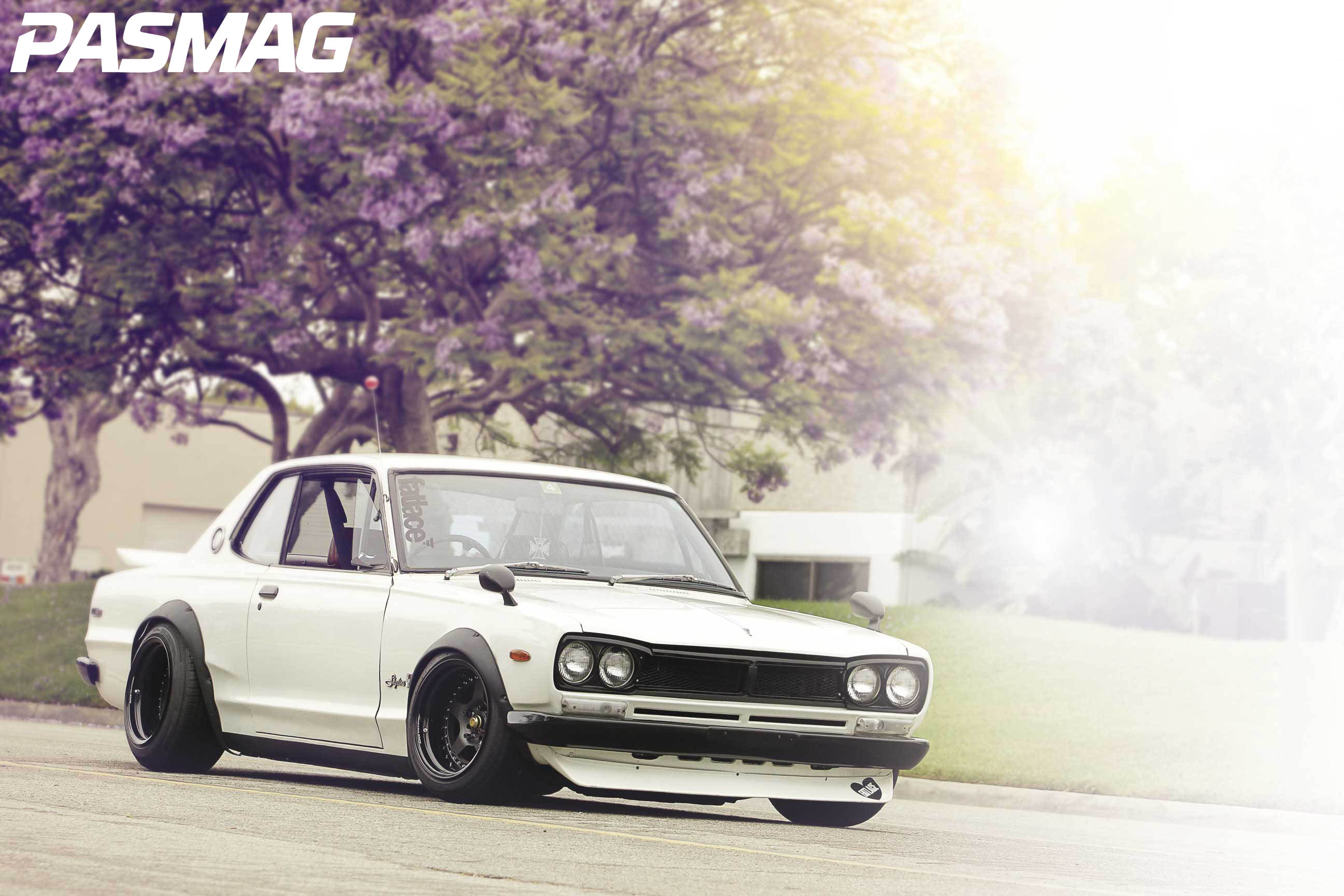 The KGC10 chassis Nissan Skyline was the first Skyline under the Nissan brand, previously being built by the Prince Motor Company which was purchased and merged with Nissan in the late 1960s. This model was affectionately called “Hakosuka” by enthusiasts – “hako” meaning “boxy” and “suka” meaning “sky line” in Japanese. Produced with a 2.0-liter inline-six carbureted motor that cranks out 120 horsepower, the car wasn’t known for being one of the fastest during its production, but does have one of the most unique exhaust notes of its period. The same family of engines was used in a variety of chassis at the time, including the 240Z, Datsun 510, and even the first Nissan Maxima. Arcenal’s motor is stock for all intents and purposes, having only gaskets and some other maintenance items replaced to keep the car running properly since he took ownership of it. 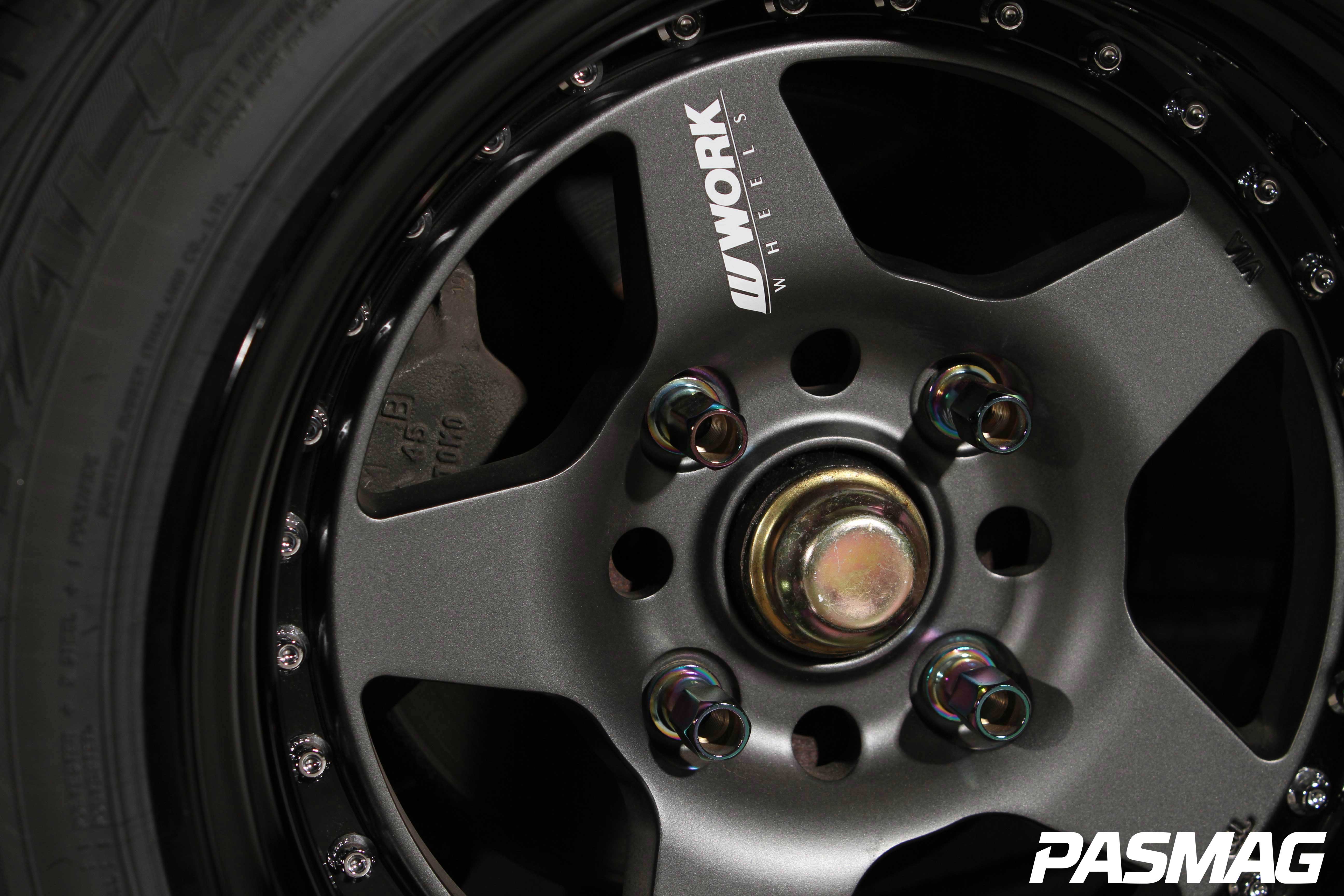 Looking at his car at first glance, the most substantial mod is the set of Work Meister CR-01 wheels stuffed under each corner. Sitting in 15x10.5- and 15x12.5-inch sizing and wrapped in Falken Ziex 512 tires in 205/50/R15 and 225/50/R15 sizing front and rear respectively, these wheels are some of the largest to be stuffed under the fenders of a Hakosuka. Arcenal has long been known for pushing the limits of wheel and tire sizing, and he didn’t want to change his reputation for this car. This same Hako previously wore a set of Volk TE37V vintage wheels in 15x9.5 and 15x10 inch, which many considered to be one of the most period-correct styles that could be worn on this car, but those simply weren’t enough. Each corner has been lowered by a set of Eibach Ground Control coil-overs to narrow the gap between the metal fender and each tire, giving the car its aggressive stance. While many hate the word ‘stance’ and the direction that some have taken wheel fitment, there’s no denying how good a car looks lowered on a set of wheels that have been sized to perfection. 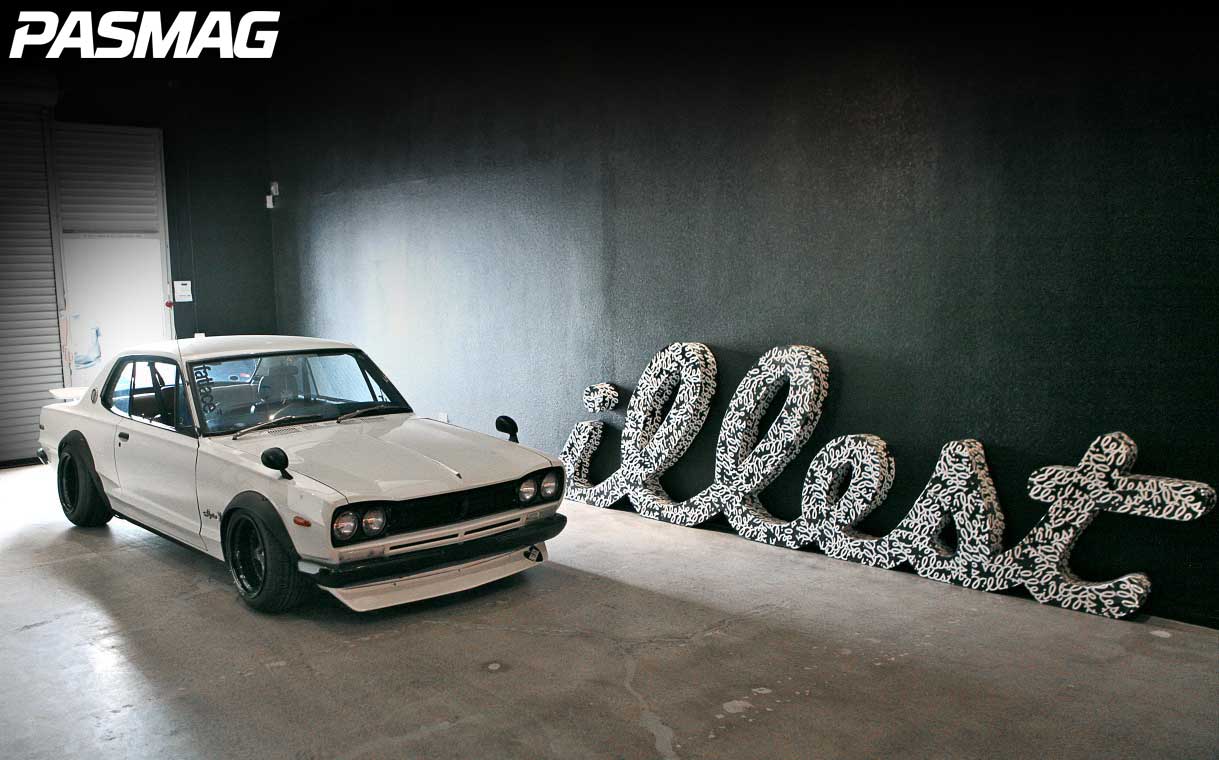 After selecting the wheels, Arcenal looked for something different to update the exterior of the car without changing the classic lines of it. As an experienced car and fashion designer, Arcenal has adapted an understanding of which elements can be tastefully changed to give the car a whole new look. For the Hakosuka, the front and rear bumpers, headlight surrounds, taillight surrounds, and front grill were all removed and sent off for a fresh powder coat in piano black. This subtle change may go unnoticed by many, but it is enough to personalize the car and distinguish it from the many other Hakos in the world. 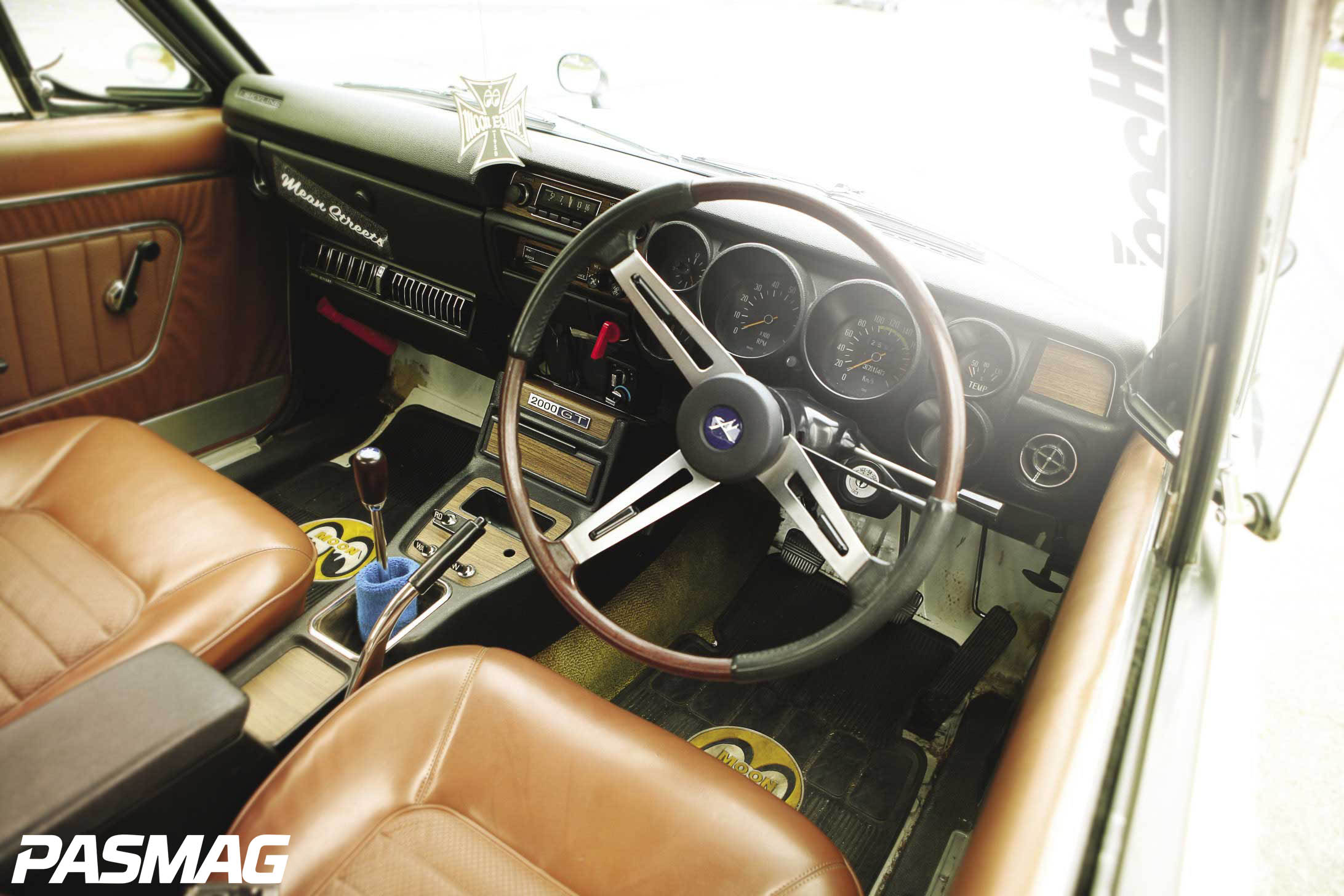 Moving inside the car reveals classic materials from the era. The wood grain steering wheel and shift knob show some signs of wear, but are otherwise in fantastic condition. All the wood trim dash panels are also in great condition, a feature more commonly found in high-end European cars than performance Japanese cars these days. The front and rear seats and both door cards are pristine, with the original brown leather and cloth looking nearly fresh off the showroom floor. 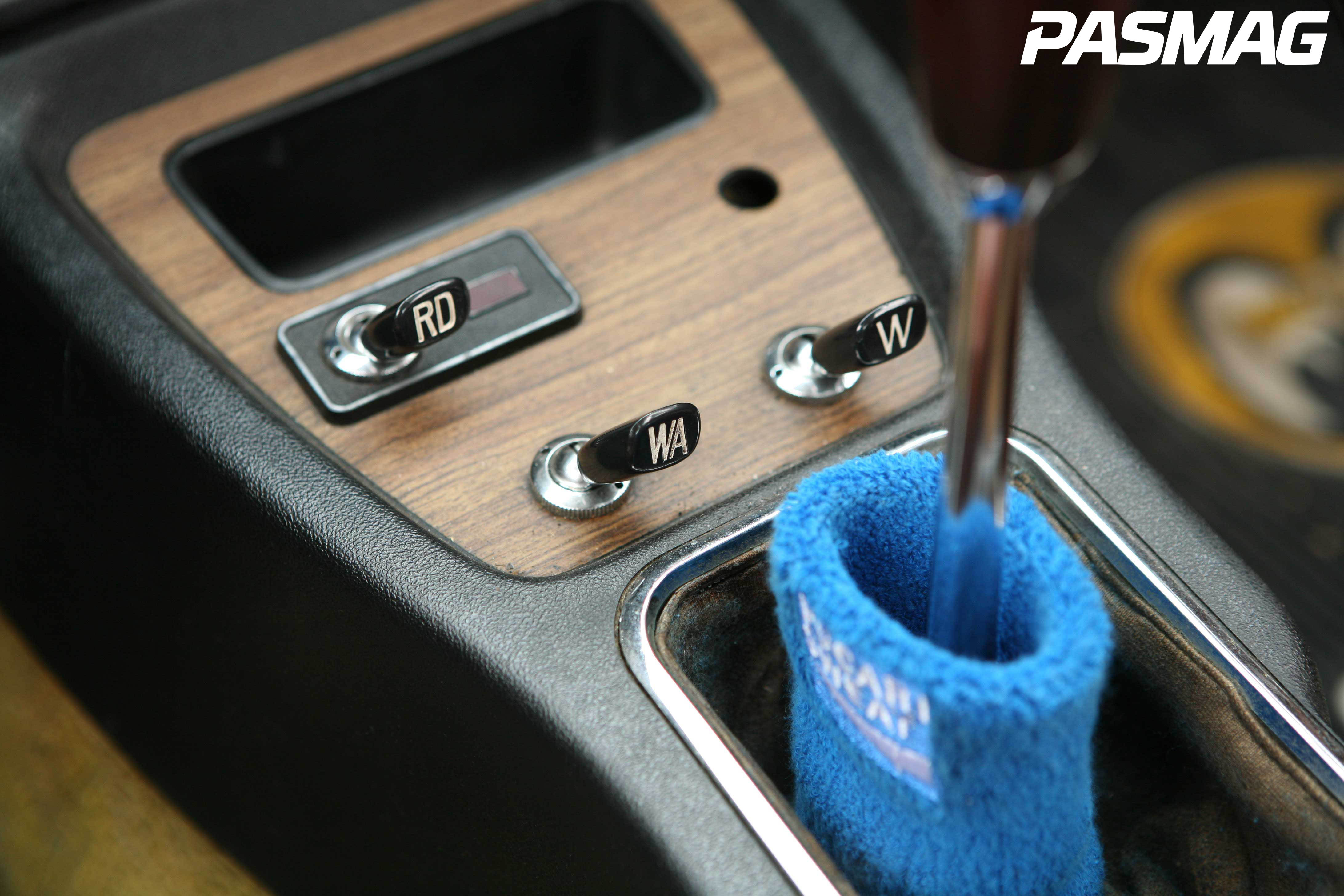 Arcenal has added a few select stickers and accessories like Mooneyes floor mates and a Pocari Sweat shift boot, but the car is a pristine example of how to keep a vintage interior in the best possible condition. While the OEM radio won’t actually work in North America due to the difference in broadcast frequencies, the nostalgia of having a fully-complete interior is not worth swapping for a more modern unit. One of Arcenal’s favorite parts of the car is the vintage aroma that comes with its age. 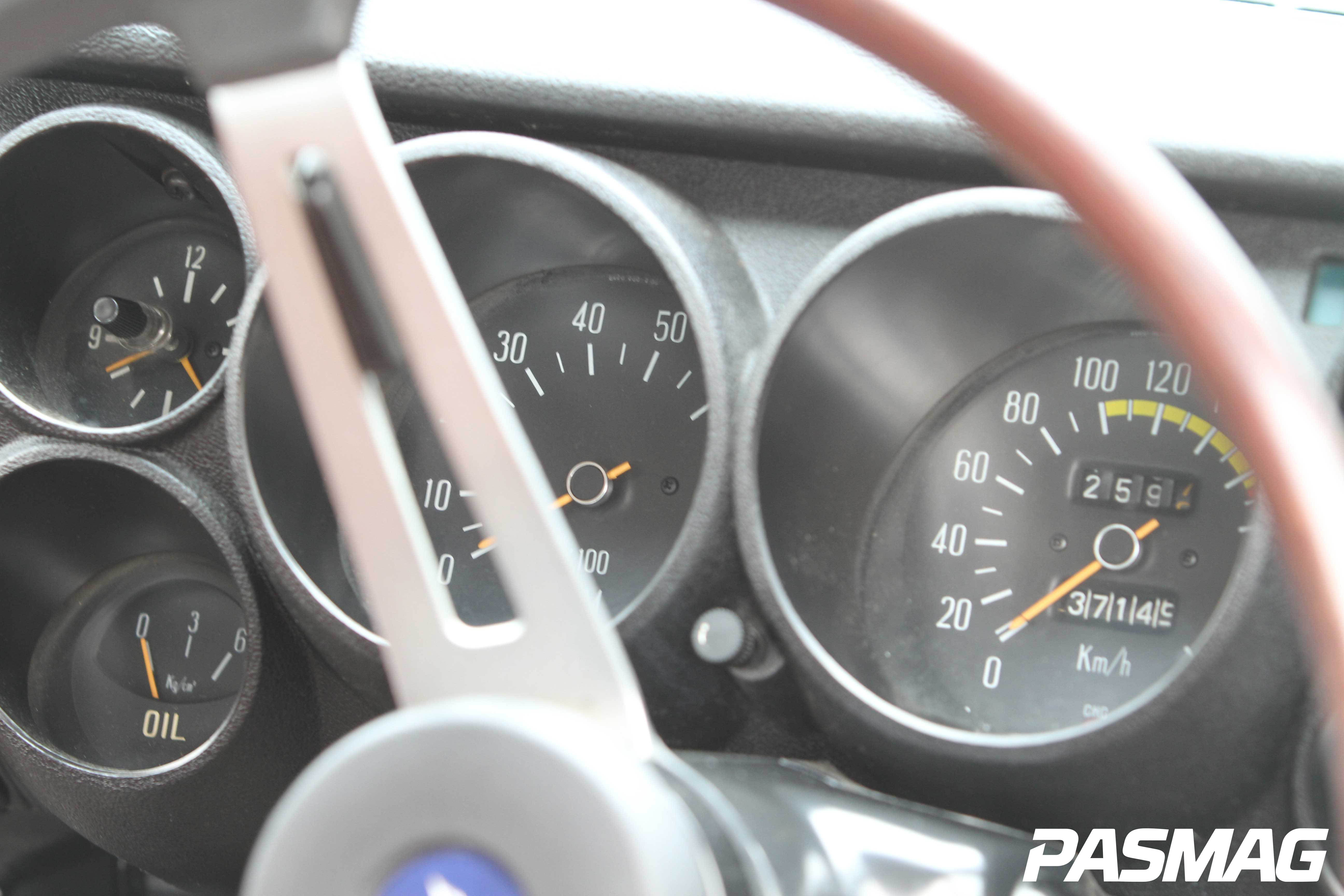 “The awesome thing about old cars in general is the smell of ‘old.’ You simply don’t get that anymore,” says Arcenal. “It’s just cool. Well, I don’t know if the smell is really cool, but it’s definitely distinct.”

But this isn’t the only Skyline in the Fatlace family. If you spotted the R35 Skyline featuring the Bensopra body kit and Greddy twin-turbo engine package at the 2012 SEMA Falken booth, that car also belongs to Arcenal. In addition, Fatlace employee Felix Marcelino owns a 1974 “Kenmeri” Skyline which we previously featured, before it was purchased from the previous owner. To say this Hakosuka is in good hands would be an understatement. As one of the premier examples of the earliest model of Nissan’s Skyline, this car is one that we may lust after for years to come! 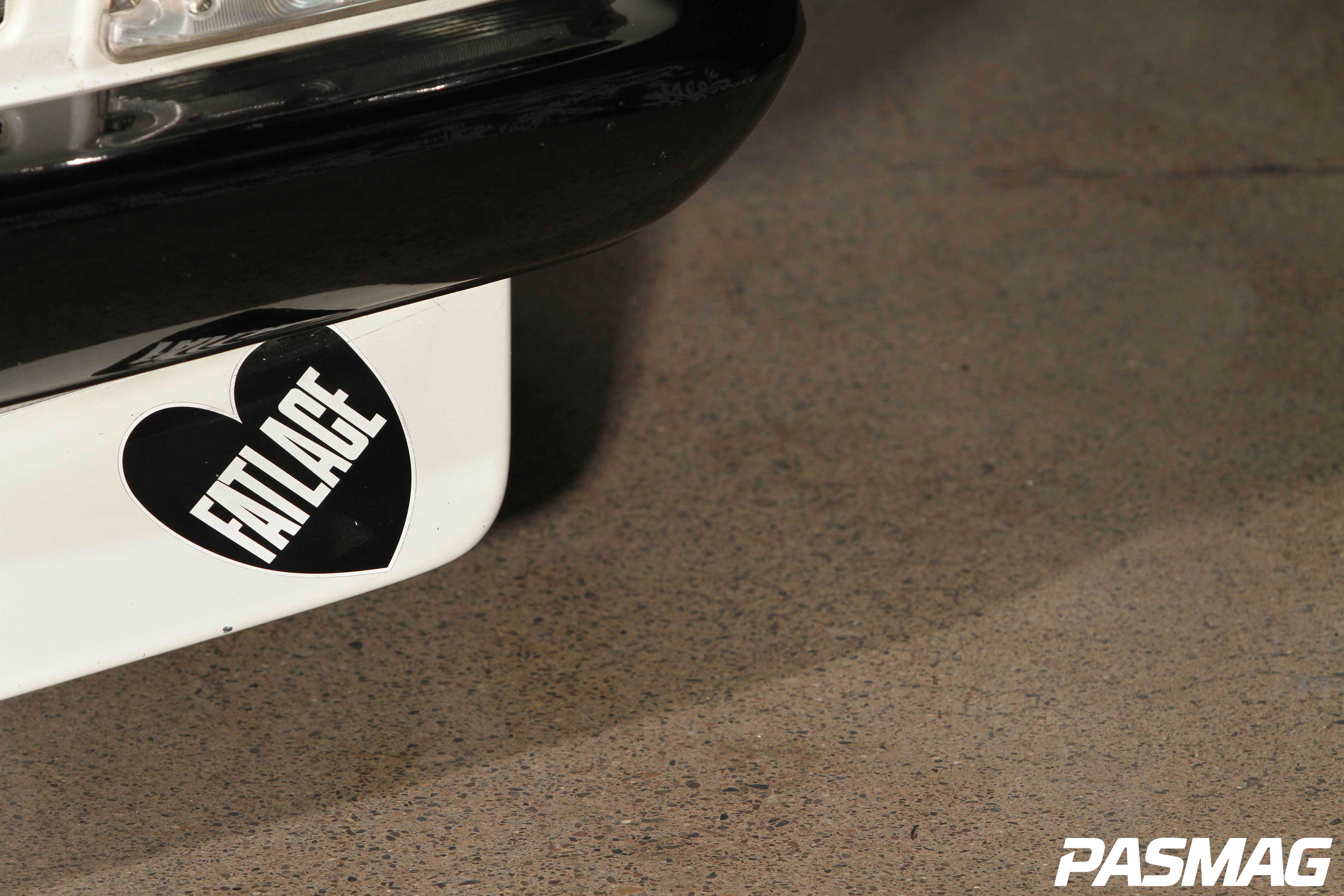 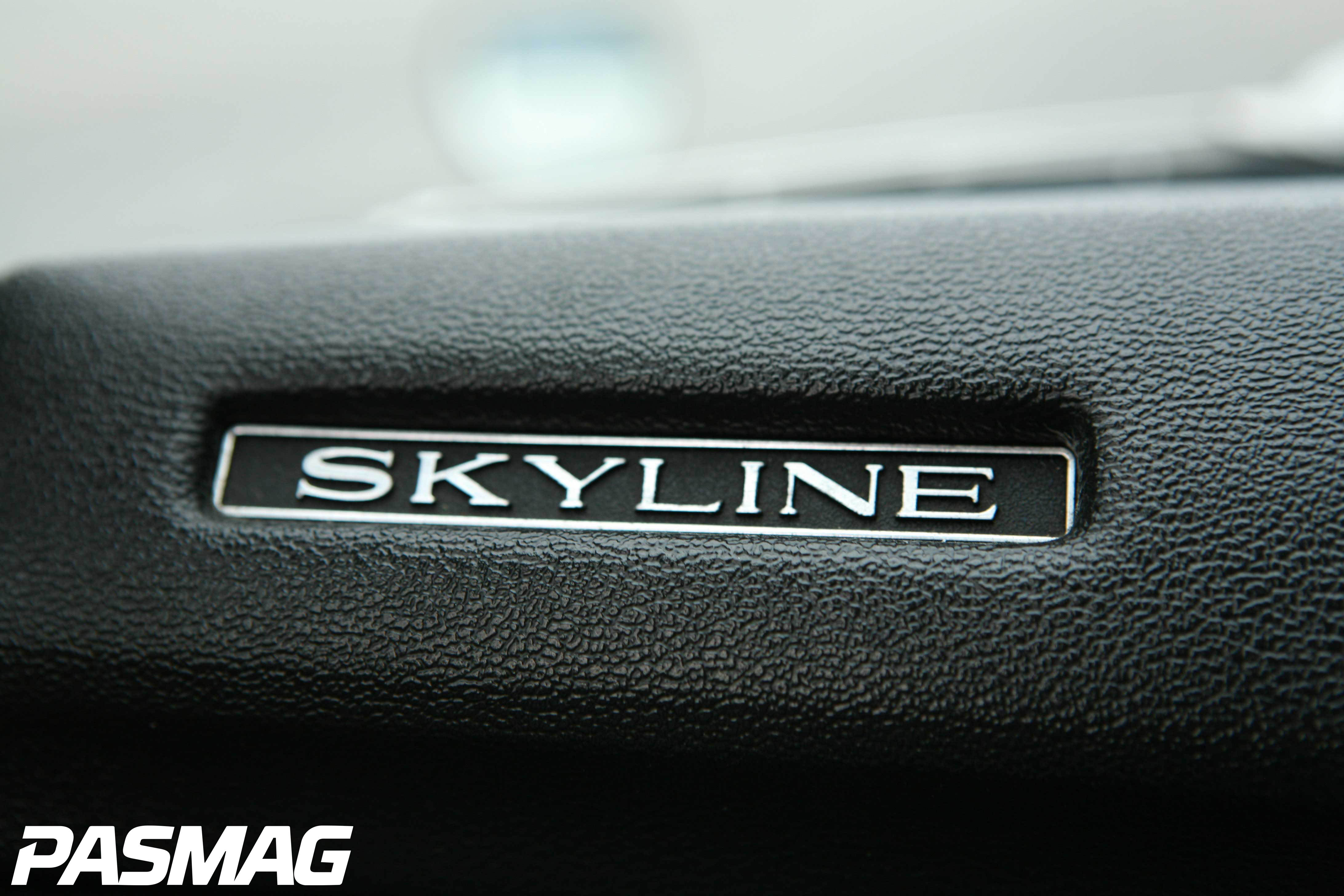