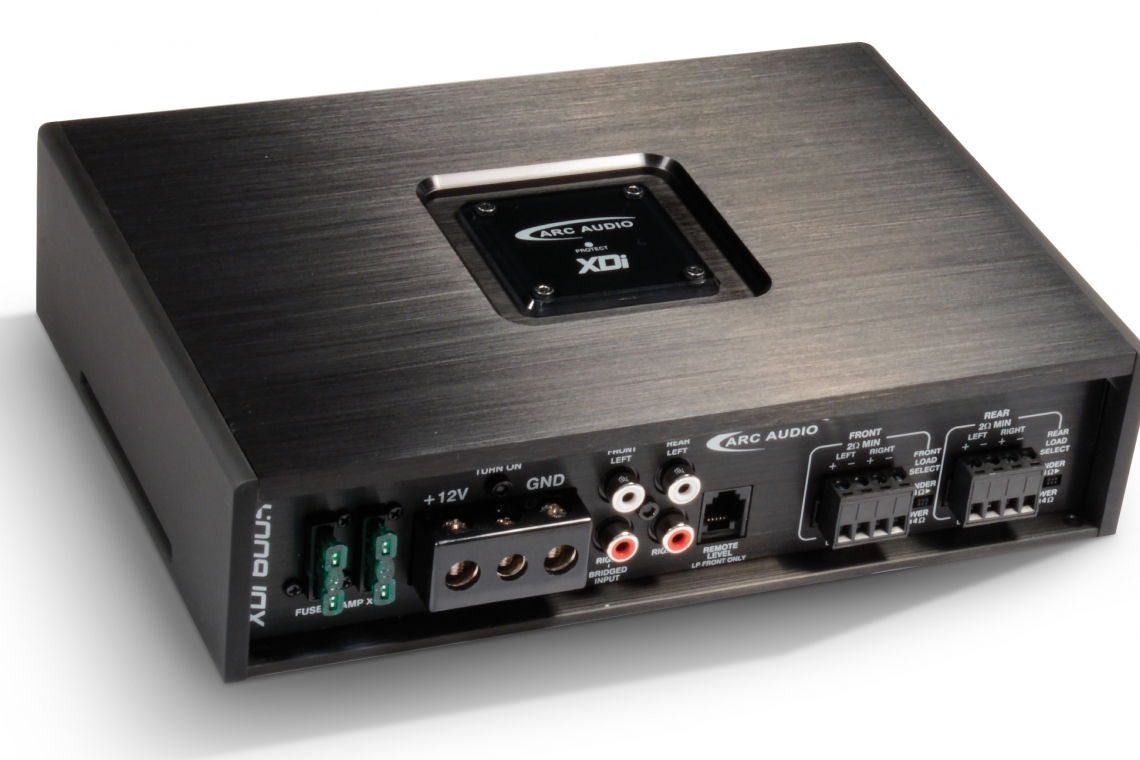 Anyone who’s spent 15 minutes shopping for a new amplifier knows there is no shortage of car audio amplifiers to choose from. Where there is a shortage, however, is in the realm of intelligently-designed amps that are not merely polished copies of an old design, but rather an entirely new approach to car audio amplification. Amps designed from the ground up provide excellent sound, high efficiency and flexibility in the way they interface with the source as well as the loudspeakers. When a company like Arc Audio teams up with Robert Zeff, one of the most innovative and brilliant design engineers in the business, the result is definitely something worth listening to. So that’s exactly what we’re going to do in this review of the all-new Arc Audio XDi 600.4 amplifier. The XDi V2 series of amplifiers offer a wide range of choices, with seven models to choose from, including two four-channel amps, a pair of five-channel models, a six-channel monster and even a pair of monoblocks. The XDi 600.4 is the largest of the four-channel models, rated at 150 watts per channel into either four or two ohms (more on that later) and a suggested retail price of $479.

The new XDi series of amplifiers utilize Class D topology to maximize power efficiency and reduce heat, which allows a smaller footprint, making the amp easier to install and hide. Sure, there are plenty of amps that have gone to Class D to exploit the benefits of that topology, but no one that does it quite like this. The XDi 600.4 is a “constant power” design, which means it will deliver the 150 watts of rated power into either two ohm or four ohm loads. And yes, this has also been done before, but these new Arc Audio amps accomplish the feat in a very clever way that does not require manipulation of the power supply secondary voltage. Without causing anyone to break out a technical dictionary or a slide rule, I’ll simply tell you that this constant power amplifier works through very clever manipulation of the Class D feedback loop signal which is normally used to control distortion. By altering the shape of the waveform that gets fed back into the Class D controller, the amplifiers power output can be made virtually identical at two or four ohms. And best of all, this control is put into the installers’ hands, and can be set differently for the front and rear channels.

This is a huge advantage over previous designs that required the power supply secondary voltage to be switched low for two ohm operation. For example, if you want to drive a four ohm subwoofer bridged on one pair of channels and also run four ohm components with the other set of channels, the amp’s power supply would shift to a low voltage to drive the sub. If you do that, all the channels in the amp would have to work on the low voltage, which limits power to the higher impedance channels usually by about 50%. That’s not the case with the XDi series, because the power supply voltages remain high for optimum power at all times. This is a very clever design, and a technique that to my knowledge has never been done before in car audio.

But the cool and clever features don’t end there. Arc Audio wanted to build a great sounding, high performance amplifier that could be used in as many different system scenarios as possible. The goals were real world functionality, flexible installation applications, and of course great sound quality. To that end, the XDi amp is equipped with a long list of features that are difficult and in some cases, impossible to find in any other amplifier. The amp is a dream to install with all of the connections on one side, and even quick disconnect speaker plugs that will accept 14-gauge wire. How about a removable top cover that gives you access to the amps settings and controls when removed, and keeps them from prying fingers when in place? Not to mention the cover also protects the wire connections and terminals as well. Other features such as high and low level inputs, plus the ability to use the DC signal present on most radio outputs to turn the amp on when using the speaker outputs for signal are a plus. You can even run speaker level inputs on the RCAs! The XDi 600.4’s fully balanced differential input stage provides maximum installation flexibility along with very good Common Mode Rejection Ratio (CMRR) performance. This helps to ensure a noise-free signal, and greatly reduces the likelihood of unwanted engine noise interfering with your tunes.

Special microprocessor-controlled protection circuitry prevents amplifier damage to due inadvertent conditions such as under or over voltage, short circuits, thermal issues, etc. But what makes the XDi amp stand out from the crowd is that it also provides diagnostic fault codes for whatever protection has been activated. It accomplishes this via a series of timed flashes of the top-mounted logo panel. When the amp is operating normally, the panel illuminates in blue. But diagnostic codes are flashed in red, and by counting the number of flashes, the user can easily determine what the problem is and get it corrected. No more searching for the likely culprit, the Arc Audio amp will show you what’s wrong so troubleshooting is fast and painless. And there’s more…like the audiophile grade filter components used in the Class D output stage, a high quality Pi filter on the input of the power supply which is high-speed switching, all in an effort to reduce the potential for radio frequency interference, and even fan-assisted cooling to maintain the amps ability to play loud for long periods. Of course, all the normal features are included, the front and rear channels can be set up as full range, high pass or low pass operation, and the front channels are designed to be the subwoofer connection with the inclusion of a bass boost function as well as an included wired-level control. An input select switch allows you to drive the XDi 600.4 with four channels of input, or only two channels if that’s all you have available. And if you have an installation where there is no traditional remote on wire, simply flip the Auto Sense switch on, and the amp will turn on and off with your headunit. 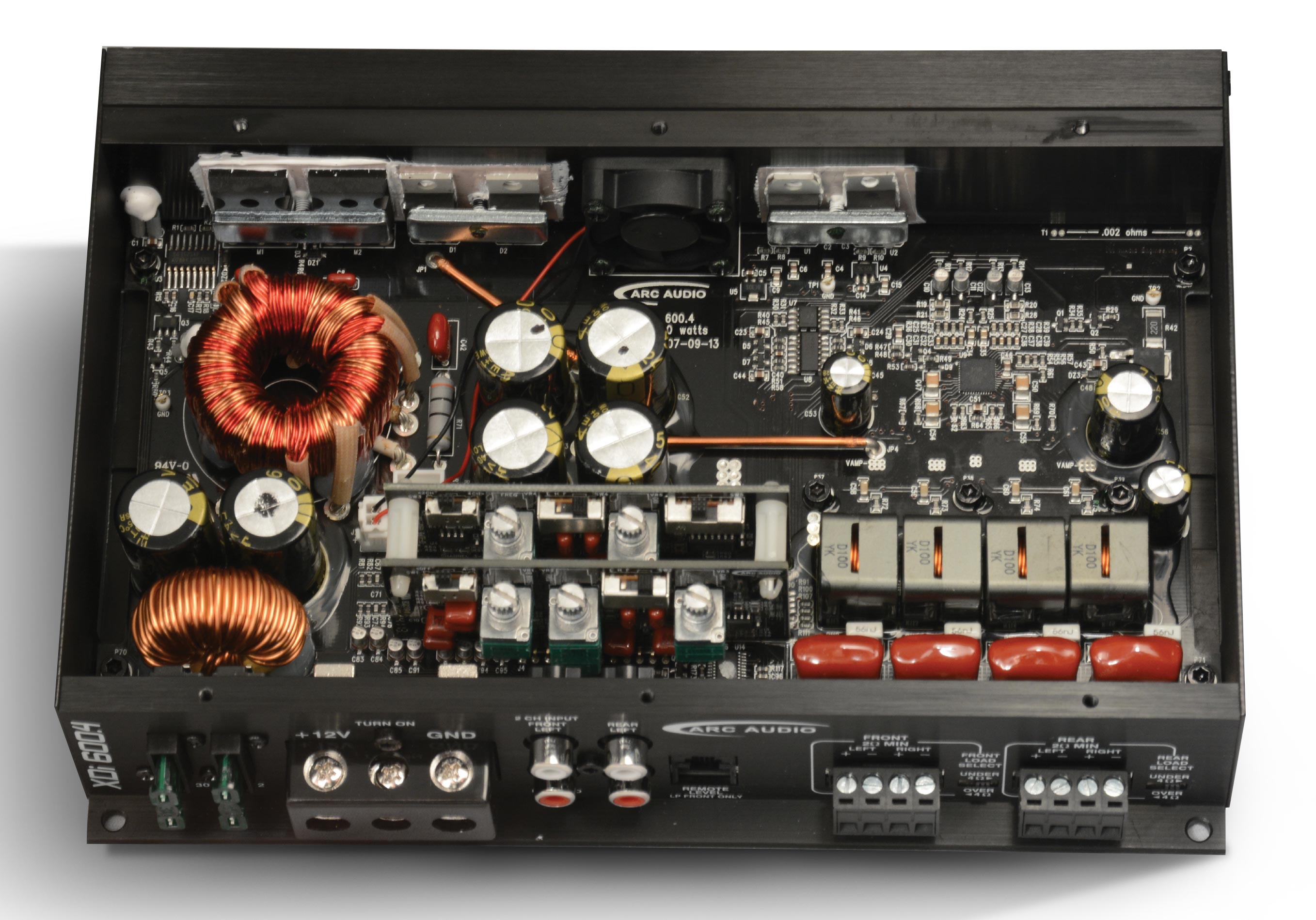 When it comes time to listen to the XDi 600.4, my expectations are high. I particularly want to try out the amp’s ability to deliver high power into both a two-ohm-per-channel woofer load and a four-ohm-per-channel component speaker load. To that end, I bridge a four ohm woofer to the front channels and set the crossover to low pass at about 80 Hz. The rear channels are connected to my reference component speakers, and I leave the crossover in full range mode. The results are impressive. From a sonic perspective, the amp is basically transparent and musical. The bass is well-controlled with good authority. I didn’t notice any degradation of the full range signal from the components when the bass hit either, which is something I always listen for when auditioning a multi-channel amp driven from a single power supply. My listening session lasts for several hours, and I simply enjoy the music from this clever bit of engineering until I realize it’s dark outside and it’s time to go home. I’d rank the sound quality performance of this amplifier in the upper echelon of car audio amplifiers, certainly good enough to benefit from very good source material, and pleasing to skilled listeners. I know I’m in the minority on this, but when gear is this good, it’s almost a shame to play MP3 or other digitally-formatted music through it.

PERFORMANCE/BENCH MEASUREMENTS
Back on the test bench the next morning, the Arc Audio XDi 600.4 shows why it sounded so good the day before. Frequency response is ruler flat, stereo separation is excellent, signal-to-noise performance is better than average, and power output works exactly as described in the manual. So yes, the amp just flat works. Power efficiency is very good, particularly when compared to the other “constant power” designs, where efficiency drops in low impedance mode. Through a series of protection tests, the amp takes care of itself and provides me with the diagnostic flashes to let me know exactly what’s making it unhappy.

CONCLUSION
There are plenty of choices when it comes to selecting the right amp. The XDi Series from Arc Audio are designed to make the decision easier, with unquestioned sonic performance, comprehensive connection capabilities, a small physical footprint, and the genius of Robert Zeff. To quote Arc Audio’s product manager Brad Ott, “XDi is simply Class D done right.” When you look at it that way, your decision may become a bit easier to make.