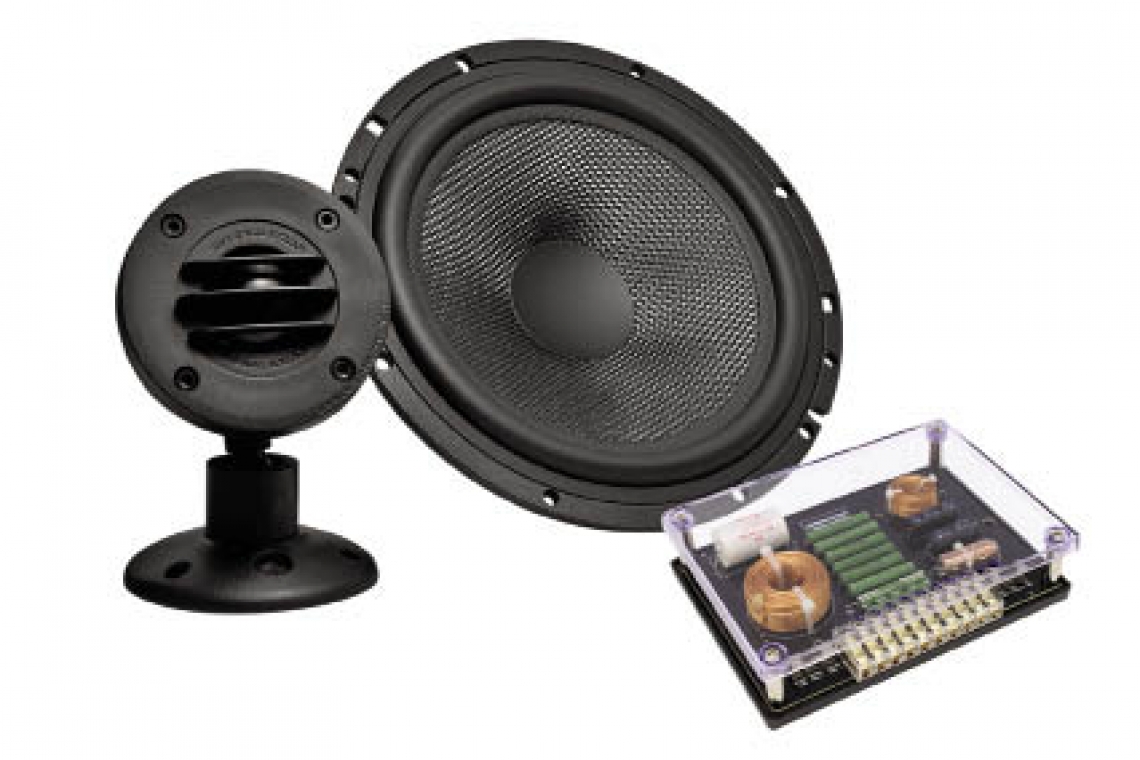 I recently had an opportunity to evaluate a 6” component speaker system from a company I was not at all familiar with. The company is called Dominations, and the product is available from True Sound Auto in Vancouver, British Columbia. According to the True Sound Auto website, The Dominations products were developed in Indonesia by a company called Audioworkshop, and they are quite proud of the success they have had in local IASCA competitions. The system I received for evaluation was their top of the line CFS 4, a two way component system featuring high quality components and good attention to detail, which is what one expects from a system with a retail price of $799. 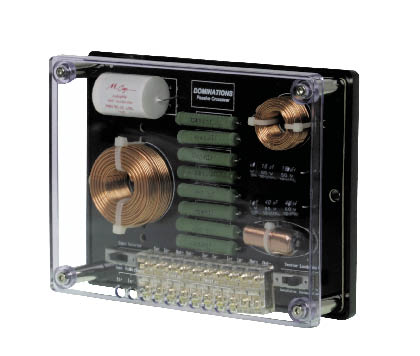 The CFS4 system uses a nicely made 6.0” midrange driver featuring a cast aluminum basket, a tightly woven glass-fiber cone material, a concave dust cap, and a butyl rubber surround. The basket has mounting holes in all the universal locations, so it should be a bolt in replacement for many OEM speakers. Turning my attention to under the lightweight cone, I found a flat linear spider, and below that, a very well ventilated 1” voice coil assembly. And while the basket does provide excellent air flow to and from the coil to improve power handling, there is a complete lack of any sort of protective screen or mesh to keep unwanted debris out of the magnetic gap. To be safe and prevent accidental failure, you want to make sure there are no errant metal filings or chips floating around in the door before you mount the speaker. The ferrite magnetic motor of the speaker is generously sized, and incorporates a vented pole piece. Wire connections are made via standard spade terminals.

The tweeter of the system is, well, a bit unusual in its design. Evidently, installation expertise and component integration in Indonesia isn’t quite on par with North America, so the CFS4 tweeters come mounted on large and somewhat ungainly looking swivel-type bases that screw down to the mounting surface with three screws. The base is made so that it’s 90° in relation to the tweeter, as if it’s made to mount to the top of a dashboard, and fire the tweeter directly at the listener. Of course, the tweeter can be removed from the housing and mounted in a more traditional configuration, but it’s still quite large, with the mounting flange about 2.625” in diameter. However, the tweeter is actually a rear vented design, and is purposely meant to use the housing as a resonance chamber. I saw a photo on the True Sound Auto website where the housing had been molded into a windshield pillar, which might be the best overall mounting solution. The tweeter itself is a Silk soft dome type, with a diameter of 28mm, and is powered by a neodymium magnet.

The passive crossovers supplied with the system use air core inductors, and use a polystyrene cap for the tweeter filter. Additional circuitry includes a Zobel network to compensate for the reactance of the mids voice coil and maintain a flatter impedance response, as well as a series notch filter to do similar duty on the tweeters impedance curve. Switches provide settings for tweeter level and phase, as well as providing bi-amp capability. The 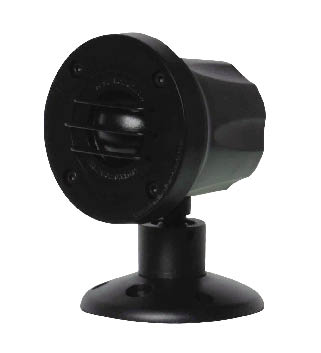 crossovers are built on large platforms measuring 7.5” x 5.5” x 1.75” tall. They use two mounting holes in the black ABS plastic bottom, and have a clear plexi top. The sides are open all the way around, which allows the resistor networks to cool better, but also risks the entry of unwanted conductive debris.

After custom building a new set of baffles to mount the tweeters on my sound room’s panels and still retain the tweeter housings for the best possible performance, at the suggestion of the owner’s manual I let the system play at a low level overnight before evaluating it the next morning. I began as usual, with the tweeters set for maximum output and adjusted the phase for best response.

Beginning with K.D. Lang’s “Constant Craving” I found the sound of the system to be smooth, warm and generally pleasing, but with almost too much midbass output relative to the tweeter level. Changing musical gears a bit, I tried Tracy Chapman’s “Fast Cars”. Again, the midbass performance was striking, with plenty of fairly deep bass and good output, but the output level of the tweeters had a bit of trouble keeping up to the amazing output of the woofers.

Moving on to some tracks I know have excellent detail and very neutral tonal balance such as Marc Cohn’s “Perfect Love” and the old standby “Ain’t No Cure For Love” by Jennifer Warnes, I concluded that the woofer side of the equation was simply excellent, but the tweeters were simply overwhelmed by the woofers. That is not to say the system sounded bad at all, because it didn’t. It simply lacked output in the tweeter region, specifically above about 7500Hz. The sonics were smooth and the bass output was impressive, but I found myself looking for about another 6dB of output from the tweeters. And this was with me sitting on-axis, directly in front of the system. If you mounted these tweeters off axis, such as in a door, the problem would probably be even more pronounced. But these woofers are brilliant! 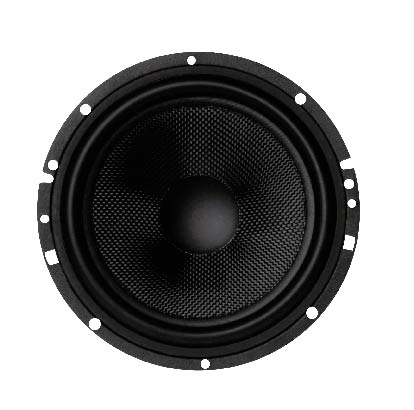 Moving the Dominations CFS4 system into the lab, I measured the frequency response, and just as I had thought, the output of the tweeter was quite a bit down when compared to the prodigious output of the woofer. I also checked the impedance response of the system, and found that the impedance compensation circuitry was indeed doing its job in maintaining a fairly flat impedance. The tweeter level shift control also worked as expected, but even in the maximum output position, the tweeters were still very much on the “polite” side of the spectrum.

For a new product from a new company, I was fairly intrigued by the Dominations CFS 4 system. The performance of the 6” woofer was as good as I had heard in quite a while at any price, and the entire system was well designed and nicely constructed. And while I’m not a fan of either the tweeter “pods” mounting idea, or frankly the tweeters in general, due to the lack of output, this would be a relatively easy “fix”. Then, with something as simple as a better level-matched tweeter and more conventional mounting, this system could be a really serious contender.

I’m going to keep an eye on these guys, and see what evolves. You should too. 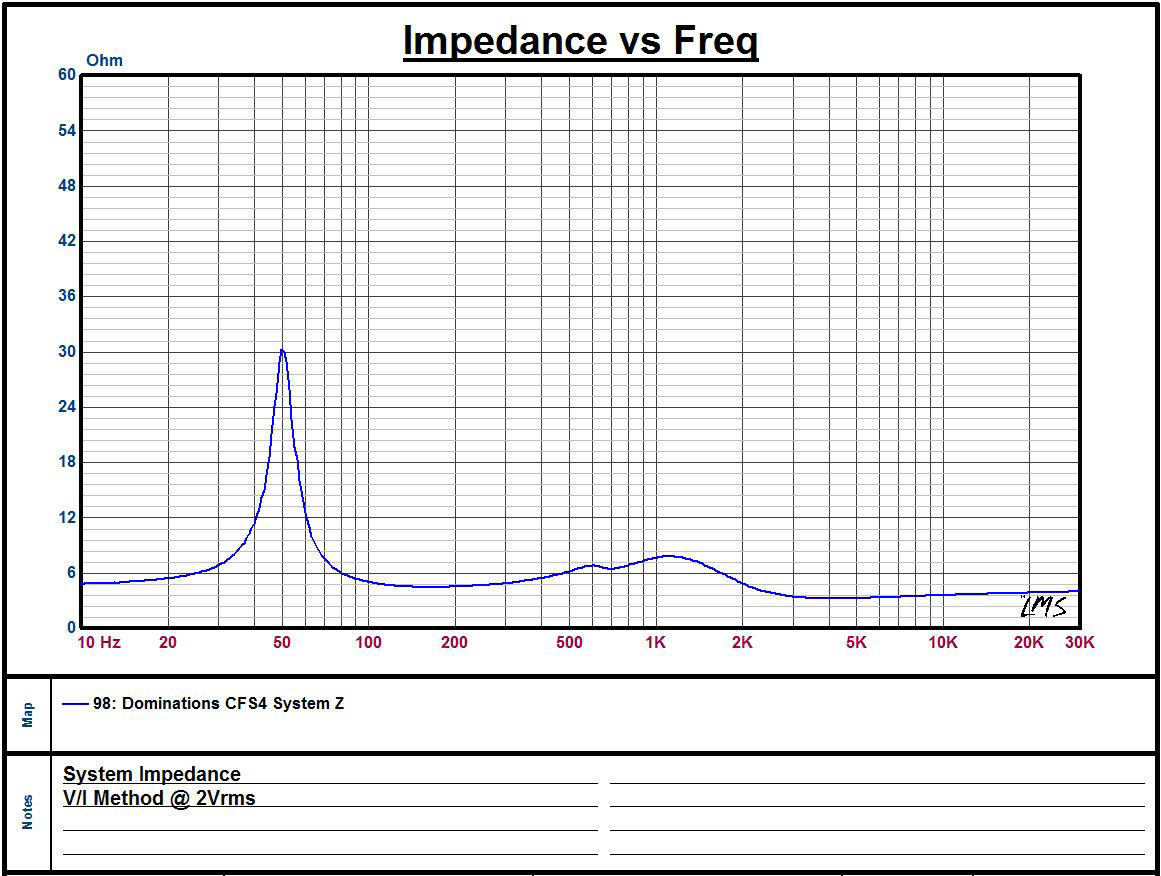