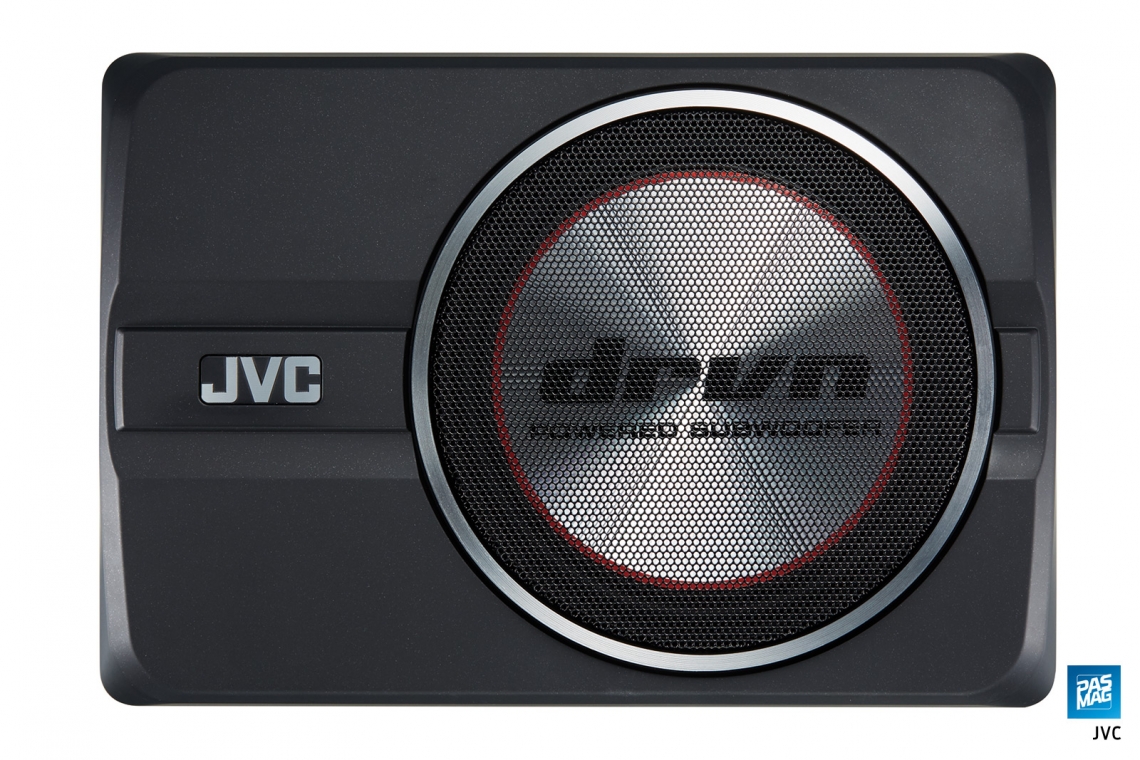 Not wanting to make big modifications to her brand-new ride, she said he could live with the general sound of the system if only she could add some desperately needed bass, however, the interior of the cab didn’t offer much room for a traditional truck-style subwoofer box or amplifier. The space the truck had had already been mostly spoken for by the search and rescue gear she normally hauls, so what she needed was an incredibly compact, self-powered subwoofer system. As luck would have it, the folks at JVC have the ideal solution for this sort of problem. The JVC CW-DRA8 subwoofer system measures only 13.75 by 9.44 inches and is under three inches tall! The sub system could easily fit in the unused space under the driver’s seat! 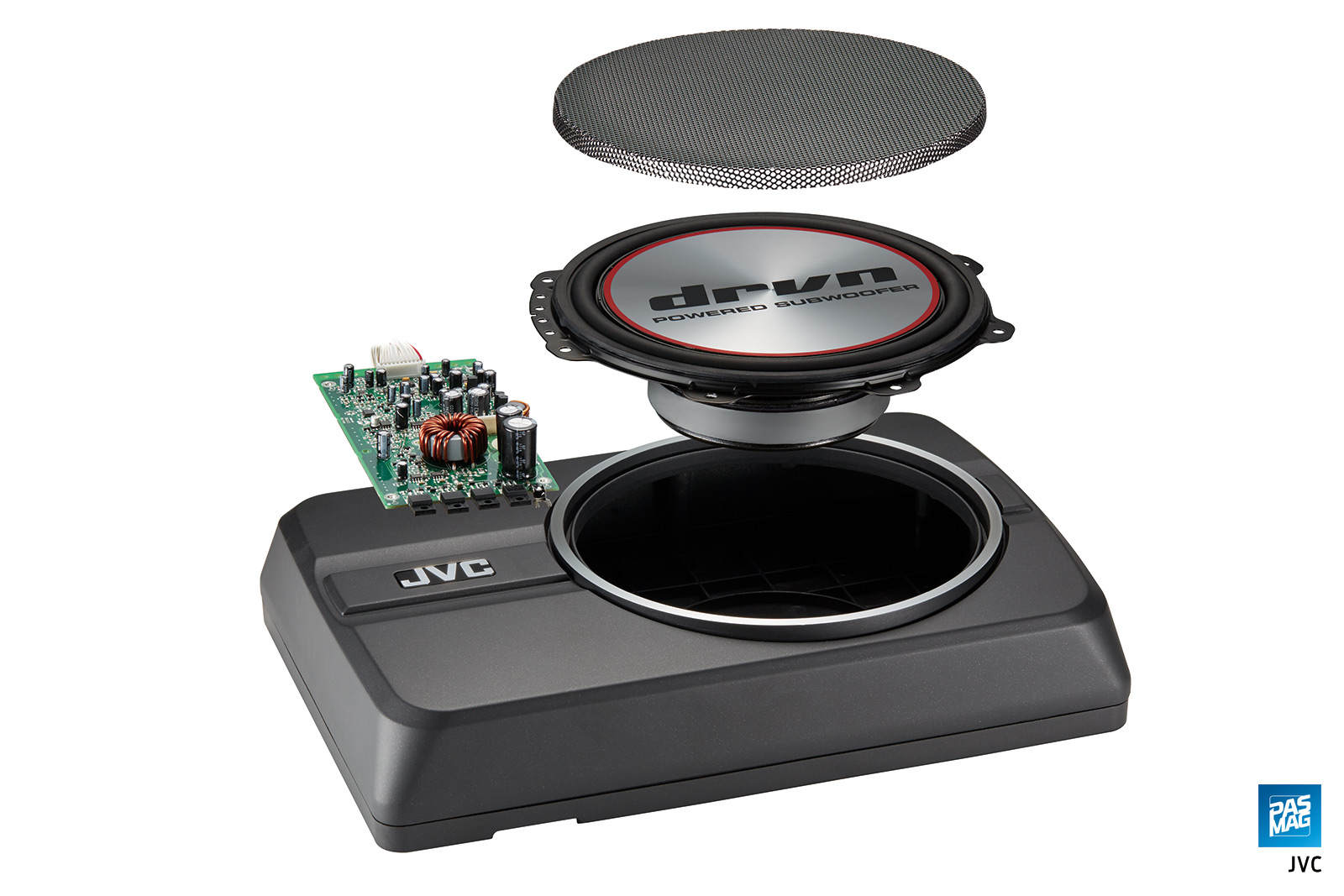 The complete powered subwoofer system is not only incredibly small, it’s also extremely well engineered. The cabinet is constructed almost entirely of aluminum for strength and a low resonant frequency, and because of the die-cast aluminum enclosure design, the enclosure does double duty as the built-in amplifier’s heat sink. Thanks to the high efficiency Class-D design, the amplifier draws less current and generates less heat than a conventional amplifier.

A shallow-profile woofer is specifically designed for this product and it features large-diameter voice coil wire wound on an aluminum former, with heavy-duty large-gauge tinsel leads. To handle the heat developed, the top plate and yoke of the woofer are painted black, and a special heat resistant cone material is employed. To ensure the woofer is rugged and durable, JVC used computer simulations to develop the shape of the woofer’s spider and provide a more consistent pressure across its diameter.

The internal amplifier is rated at 150 watts continuous, with a frequency response of 35 Hz to 150 Hz. The amplifier gets audio signal via RCA or high-level inputs, making it easy to interface into the factory outputs of Elle’s truck. A wired remote control with large, easy-to-adjust controls allows adjustability of sub output level, crossover frequency, and phase.

The wiring harness is plenty long enough to reach the vehicle’s fuse box, where it can be connected easily because it draws less than 10A of current. In fact, during my testing, I noted that the system rarely drew more than four or five amps, even at high volumes. Installation is a simple matter of choosing a location, running power, ground, and input signal wires, and then tuning it for the vehicle via the wired remote control. There are no adjustments on the cabinet itself. 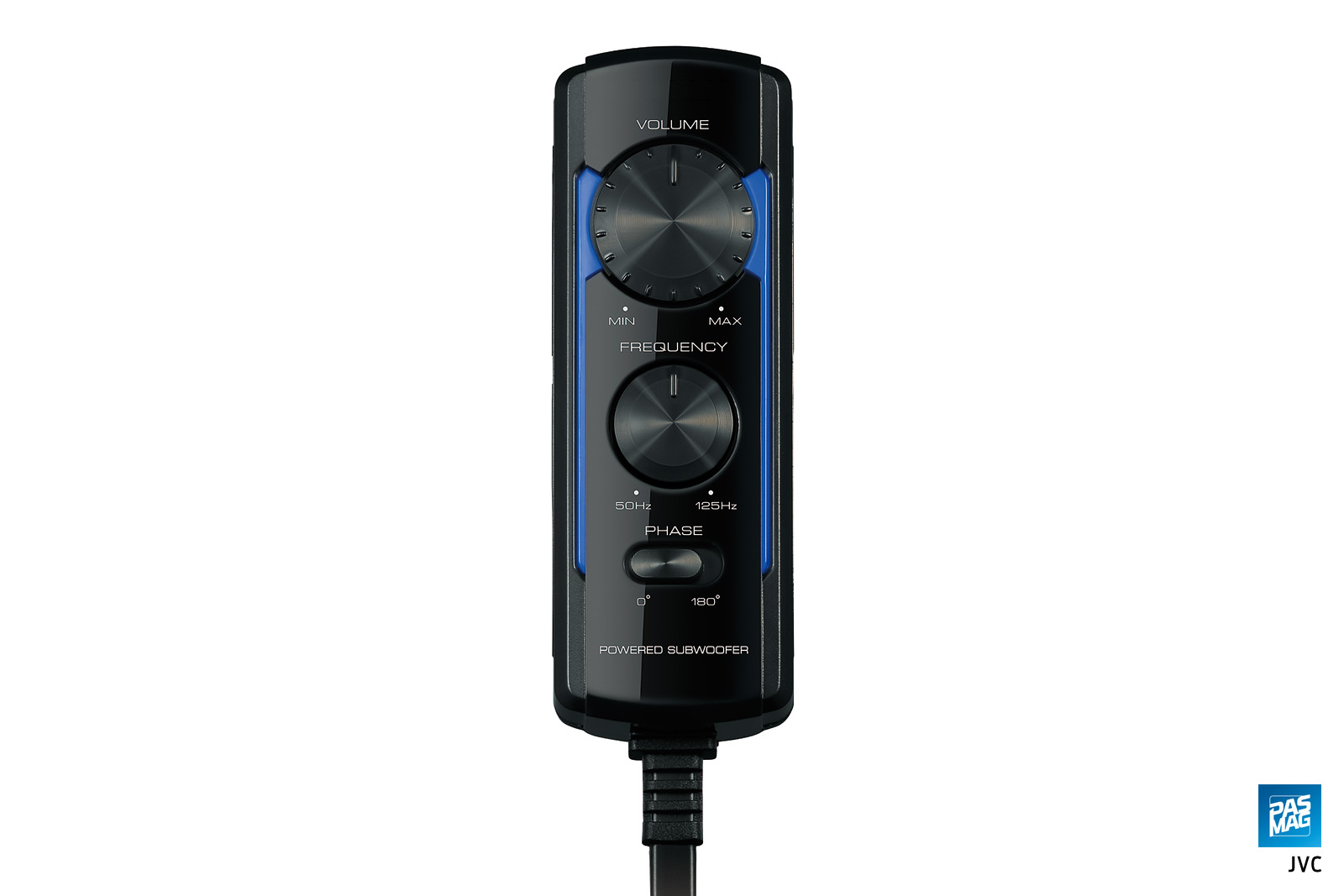 Obviously, with such a diminutive system, I wasn’t expecting earth moving bass, but I was hoping for some added warmth and dimension to the music that most factory systems desperately need. After getting it connected and tuned to suit my room and the rest of my system, however, I was quite surprised at the overall quality of the sound.

I began with of my favorite tracks from Yello’s Essential, and then moved on to Level 42’s World Machine and a couple of other tracks with strong, well-defined bass. On these intentionally bass-heavy tracks, the compact woofer system provides reasonably good output, and a bit lower frequency output than I expected.

I then moved on to some classic rock tracks from Rush, Heart, Fleetwood Mac, and The Who. The performance of the JVC system was a bit surprising, and it definitely exceeded my admittedly modest expectations. The system has exceptional woofer control, and the bass is tight and accurate sounding.

As you might expect, the laws of physics still apply, so the system lacks overall output when compared to a big woofer in a big box with a big amp, but the performance it delivers is far better than having no woofer at all. In general, I was quite impressed with the sonic performance of the small woofer system. I think it will surprise Elle when I get it installed in her truck, where the vehicle’s transfer function will increase the output of the lowest octaves. It also occurred to me that because it’s so small, and the current demand is so low, it wouldn’t be too difficult to install two of these, one under each seat, to really add some bottom end authority! As it is, I liked it well enough that I’m thinking about picking up one for bass reinforcement in my home racing simulator. 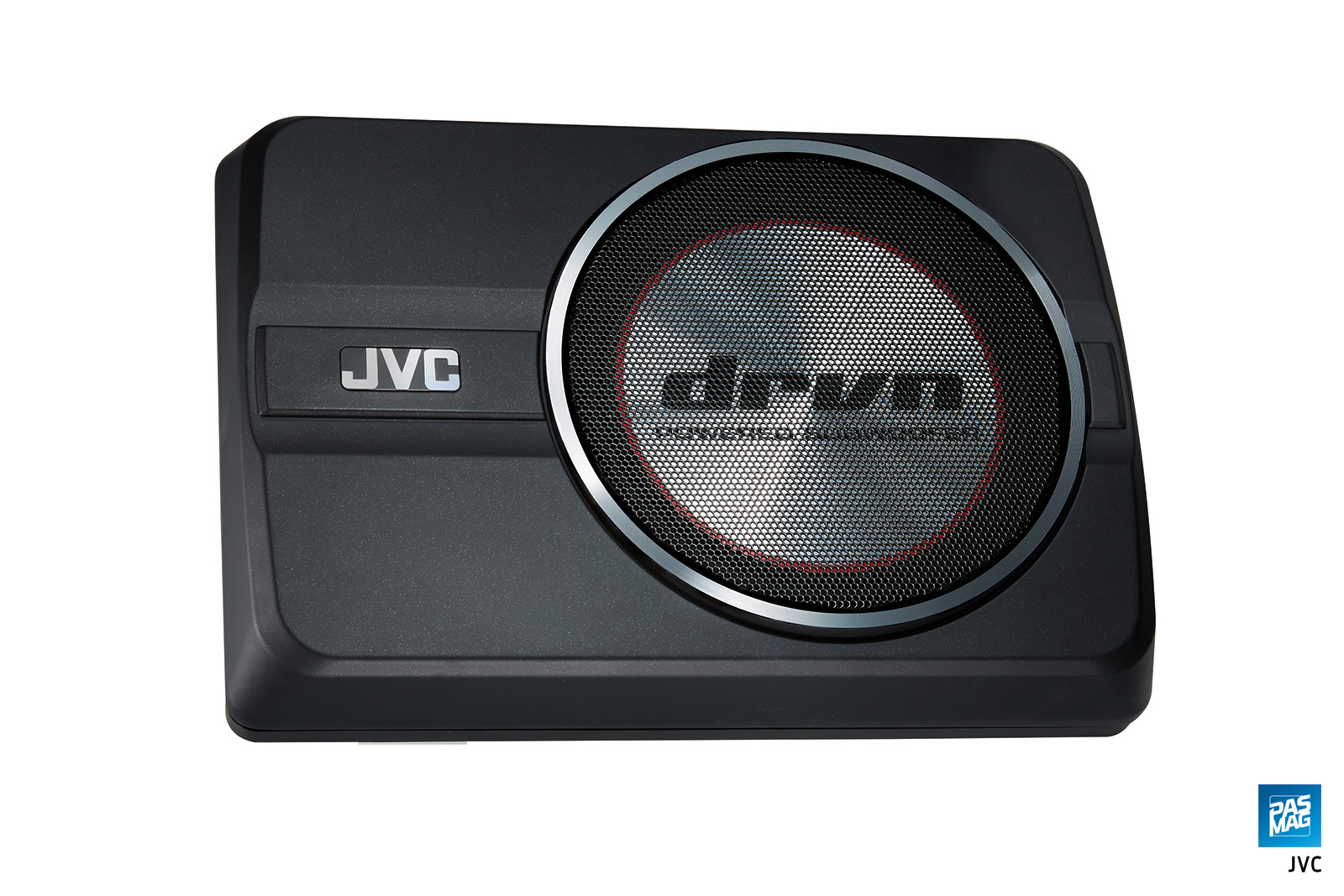 This ultra-compact system from JVC will be a brilliant solution in any vehicle where space is very limited and you need low frequency reinforcement to add the missing realism to your music. Because of its size, it can be easily hidden in a hatch or under a seat. While this system may not be the right choice if you insist on having your bass heard a block away, if you simply value sound quality without giving up storage, this could be the perfect choice for you. The CW-DRA8 is a well-designed solution that has great sound, is easy to install and tune, and is built to last. 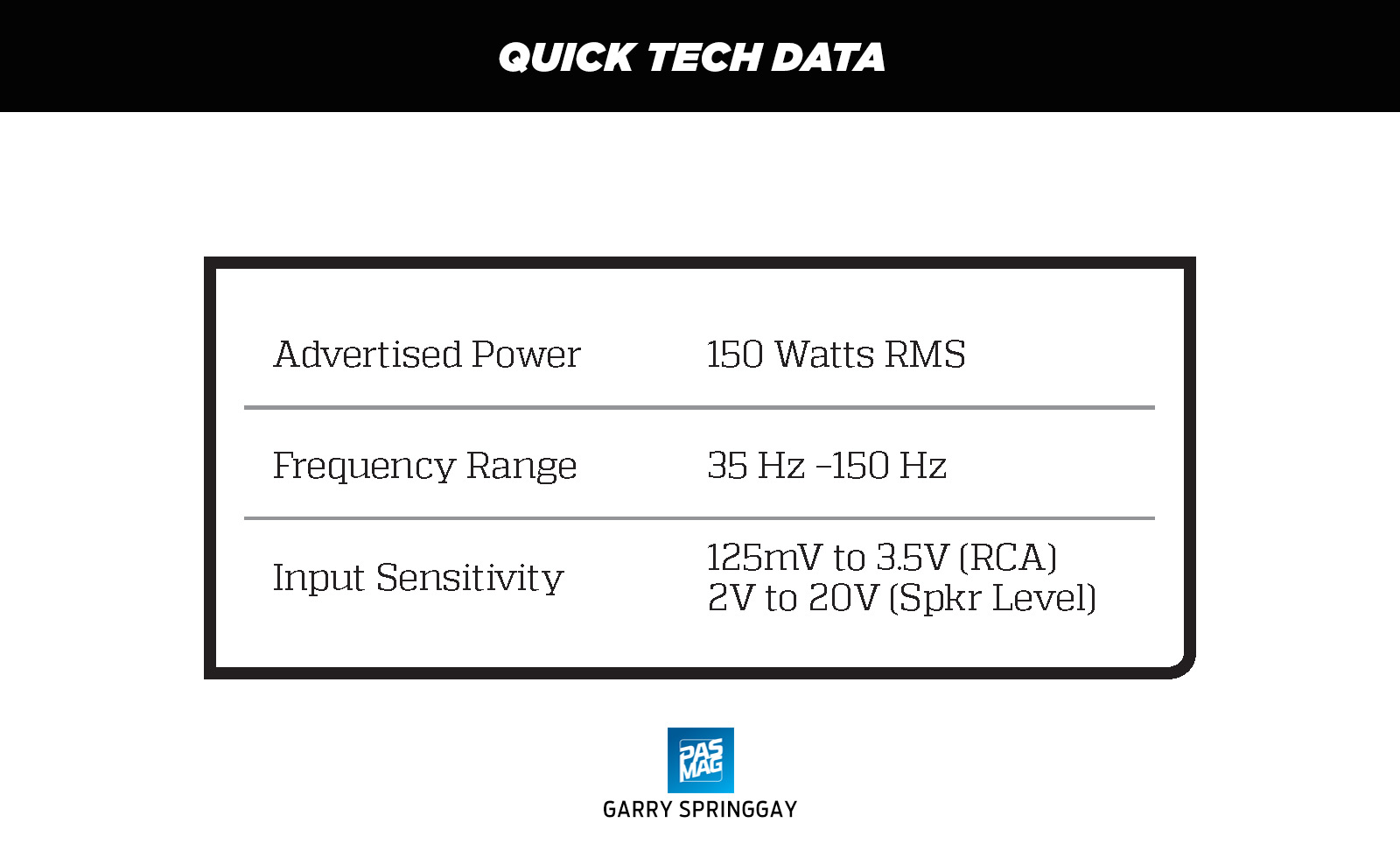