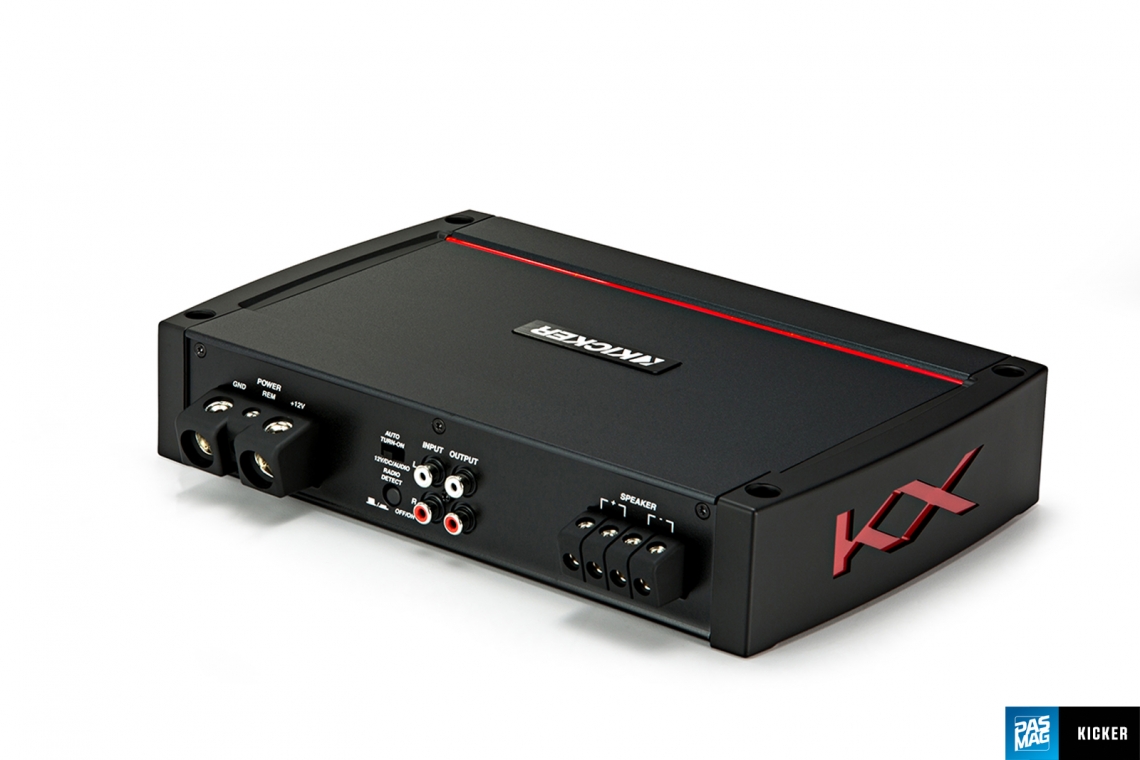 Since 1973, the legacy of “Livin’ Loud” at Kicker has always been driven by a passion for music.

The new KXA series of amplifiers build on that proud legacy, and they sent us an example just to prove it. We received a new KXA1600.1 monoblock for a thorough evaluation and review. The powerful but compact amplifier has a suggested U.S. retail price of $799.95, and is the second most powerful amp in the mono lineup, rated at 800 watts into 4 ohms and 1600 watts into 2 ohms. Thanks to the fully regulated power supply, it will deliver the rated power regardless of your battery voltage swings. From what we measured and heard, we’re pretty sure the legacy is only going to grow. 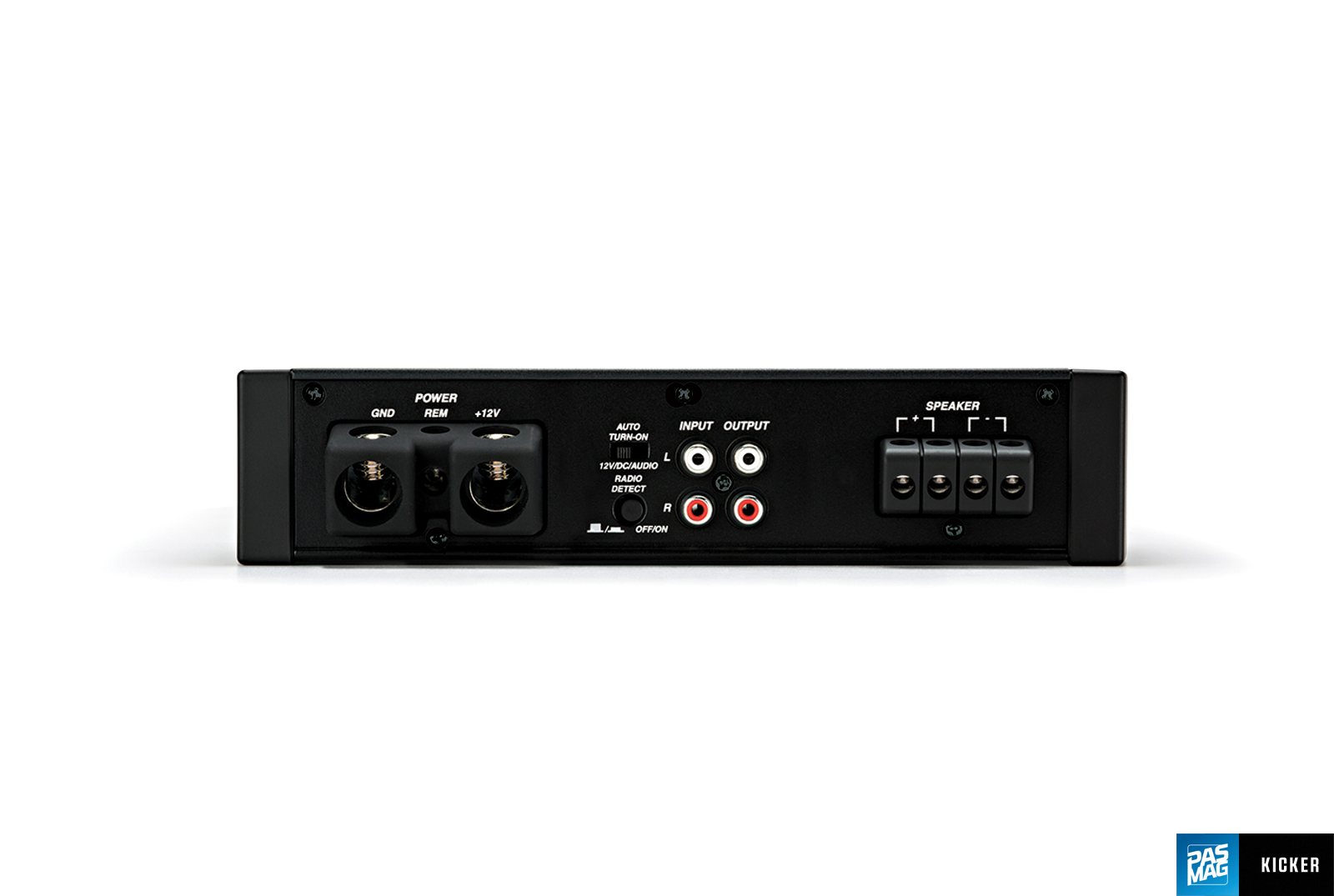 The KXA1600.1 is a smooth looking amplifier, completely devoid of the usual heat sink fins and sharp edges. Instead, the amp has a smooth top and sides, and a cool fold down cover on the front panel that hides and protects all of the adjustments and settings. The amplifier is a satin black color with a tasteful bit of bright accenting red trim. Connections for the wiring are located along the opposite long side of the chassis, and are wonderfully beefy. The amp will accept 1/0 power cables and 8 gauge speaker wire. Attention to detail abounds with the KXA series. For example, some people may not notice it, but folks like us who connect hundreds of amplifiers a year appreciate the custom made set screws that allow a single size hex wrench for all the terminals. Or the little rubber washers around the folding panels screws (which also have the same size hex head) to prevent the screws from falling out, and also to prevent rattles when closed. Even the adjustment pots are larger than typical and red, making them easier to find, and adjust. These little details are what separates the good from the great. 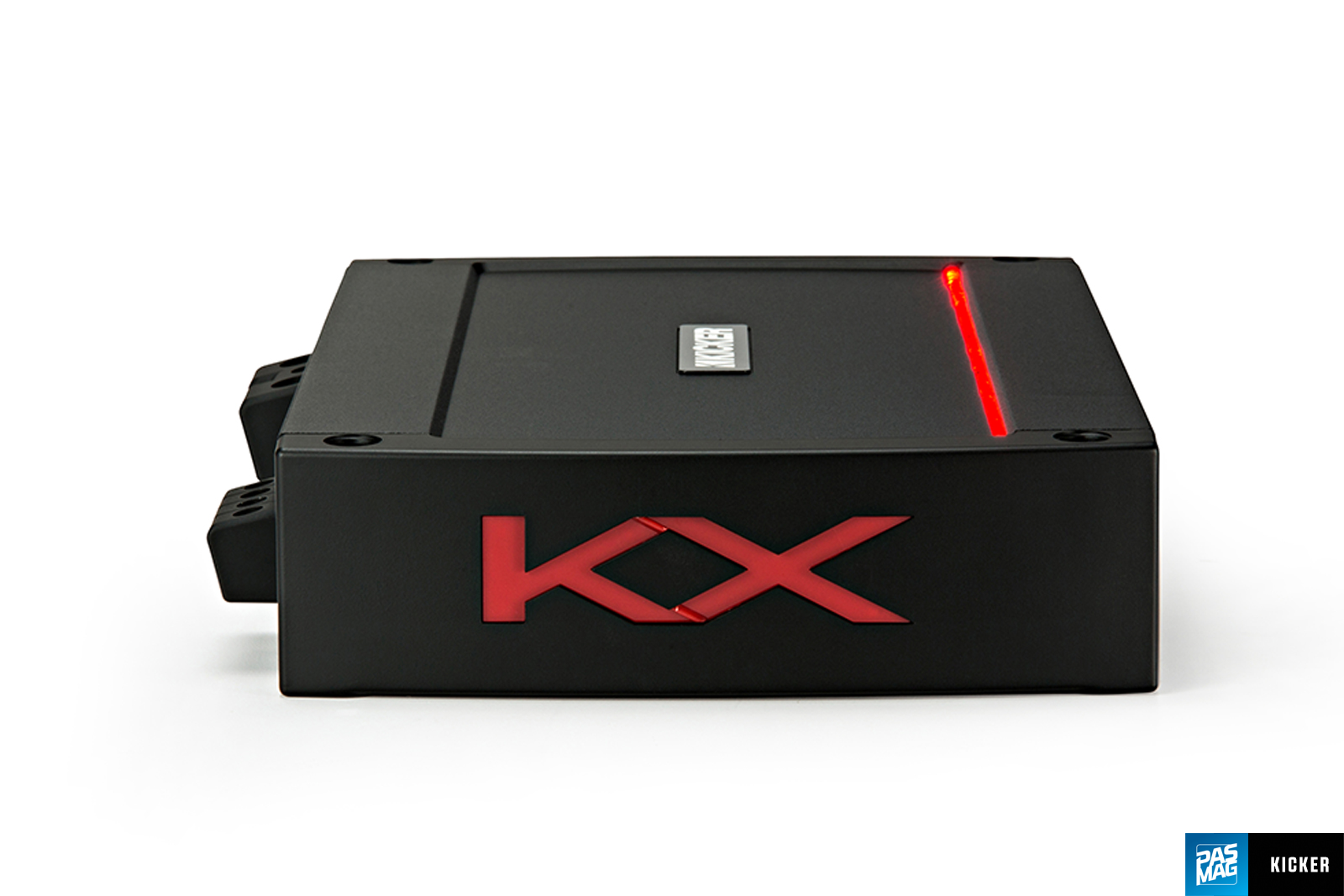 The amp has all of the typical features you’d expect, like a variable 40Hz to 160Hz low pass crossover, and a variable 10Hz to 80Hz subsonic filter, both with -24dB/Oct slopes. It also has a few more uncommon features as well, starting with a parametric style equalizer that has a frequency adjustment from 20Hz to 80Hz, and adjustable boost from 0 to +18dB. To complement the massively adjustable boost, there is also a bandwidth control, which changes the bandwidth or “Q” of the equalization. This makes the amplifier much more tunable for a specific application. 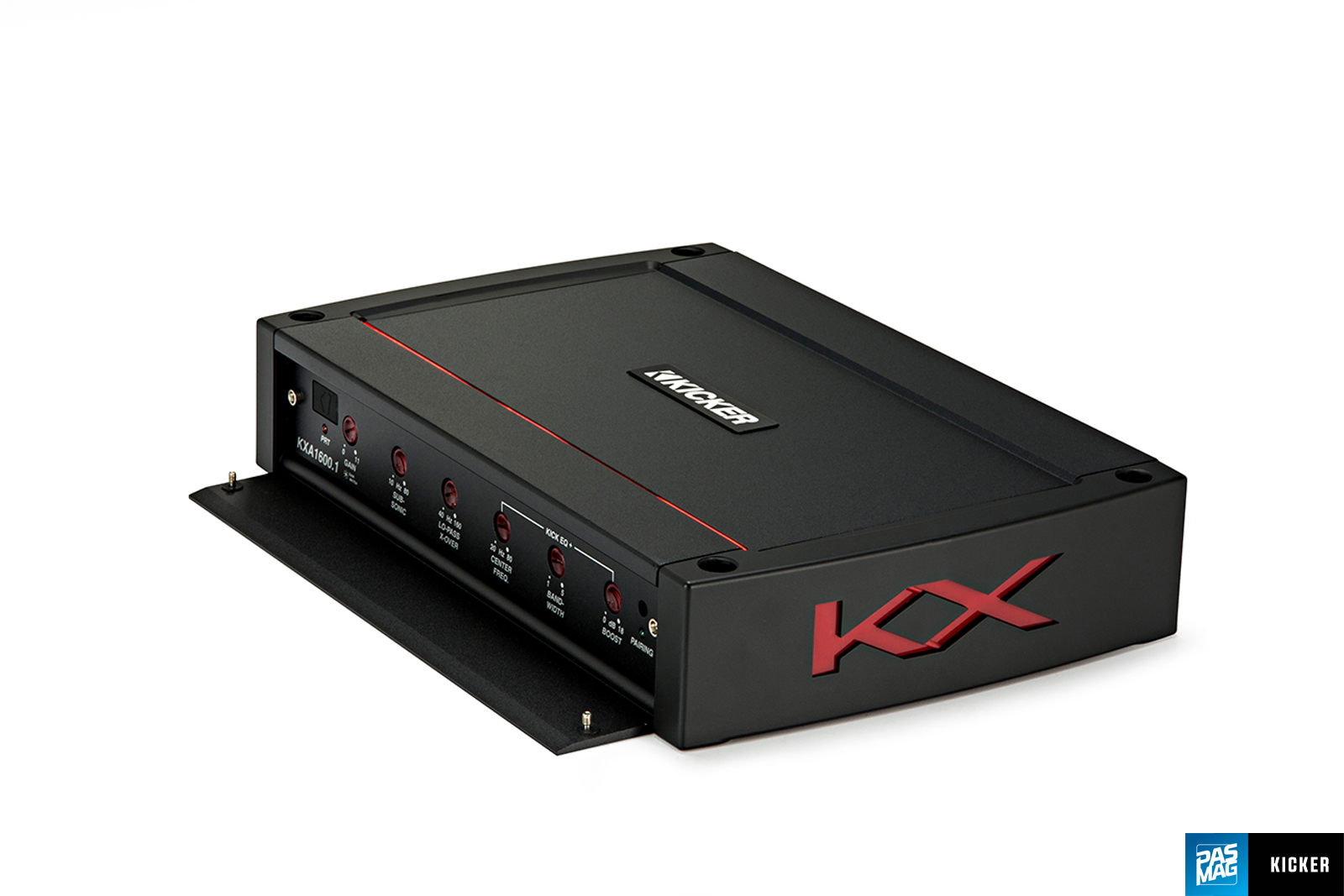 Another great feature of the KXA series is Kicker’s Automatic Turn-On selection. The amplifier can be configured to turn on with a traditional remote wire, DC offset from a head unit, or with audio signal. This capability, and the amps wide input signal voltage range, makes the amplifier compatible with virtually any type of source unit. But now I get to the really good bits. Included in the box is Kicker’s KXARC wireless remote control. The innovative remote connects to the amplifier via Bluetooth, and brings much more than just level control to the party. The KXARC remote unlocks and controls built in DSP functions inside the amplifier. In fact, one remote can control up to four separate amplifiers! Of course the wireless remote will provide level control, but it also allows 0° or 180° phase settings, and a clip indicator. But maybe the best part of the KXARC remote is Kickers SHOCwave (Sub Harmonic Octave Creation) bass restoration function. You simply press the knob until SHOC is illuminated, and then dial in the amount of restoration you want.

I would be remiss not to also tell you about how easy the amplifier is to set up, thanks to Kicker’s three different crest factor downloadable test tones (0dBFS, -5dBFS, and -10dBFS) and the built in gain LED that takes the guesswork out of setting your gains. The owner’s manual walks you through six easy steps, and you’re done. Again, the details make a difference.

I connected the KXA1600.1 to a pair of four ohm 15-inch subwoofers in a sealed enclosure. Because the box was sealed, I left the subsonic filter at 10Hz, and set the crossover to about 80 Hz. My listening began with the same twenty or so tracks I’ve used to evaluate bass amplifiers for the last decade. With these tracks the SHOCwave function was not needed, so it was nice to be able to turn it off via the wireless remote.

The first track was from the CD “Essential Yello.” Loaded with very deep bass from synthesizers, it’s a good test for any bass system, plus it’s just fun to listen to. The amplifier proved to be vastly capable, and produced prodigious amounts of bottom end. The bass output was tight and well controlled. Definition of individual notes was easy to hear and the overall sound was really natural. With this much effortless power on tap, it’s always fun to turn things up a bit! Next up was another favorite disc with brilliant bass definition, the Telarc recording of California Project, a band who performs the Beach Boys’ tunes of the 1960s. Their version of “Surfin’ USA” has what might be the best recorded kick drum in history, and will make anyone go out a buy a subwoofer. With the amplifier obviously up to the task, I switched to a string of classic rock tunes that decidedly lack real bass in the recordings. Tunes like Thin Lizzy’s “Rosalie” and Deep Purple’s “Pictures of Home” now sounded like they had been re-mastered on modern gear and had the bass we heard when we saw those bands live back in the day. The SHOCwave circuitry worked as advertised, and really improved the bass quality of old recordings. With the right amount of restoration dialed in, (there is such a thing as too much, but that’s why it’s right there on the remote!) the old favorites sounded amazing, and were so much more enjoyable to listen to. I’ll just say this: If you listen to any music that was recorded before about 1980 you will love SHOCwave technology. 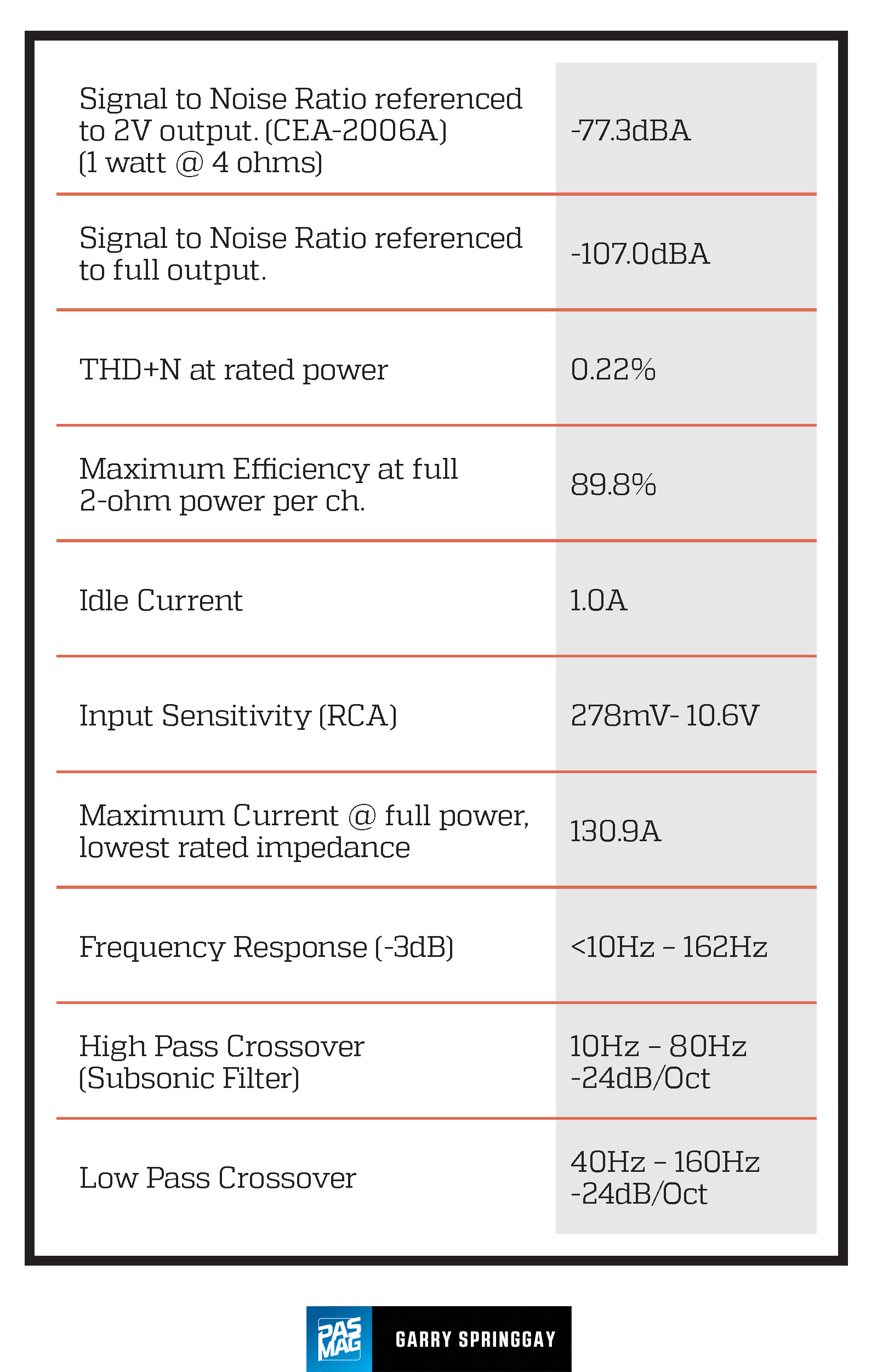 Back on the deadly accurate Cogent test bench, the amplifier was run through the usual extensive battery of tests and we’re happy to report that it outperformed all of the published specifications. A look inside showed excellent build quality, premium parts, and a clean layout. The design was obviously done by someone who understood audio, and was completely devoid of jumper wires and sky-wires.

There is no question that Kicker has been a leading brand of car audio for longer than many who read this have been alive, and with innovations like the ones found in the KXA series of amplifiers, they are only going to continue to grow the legacy into an even bigger legend, all the while Livin’ Loud! 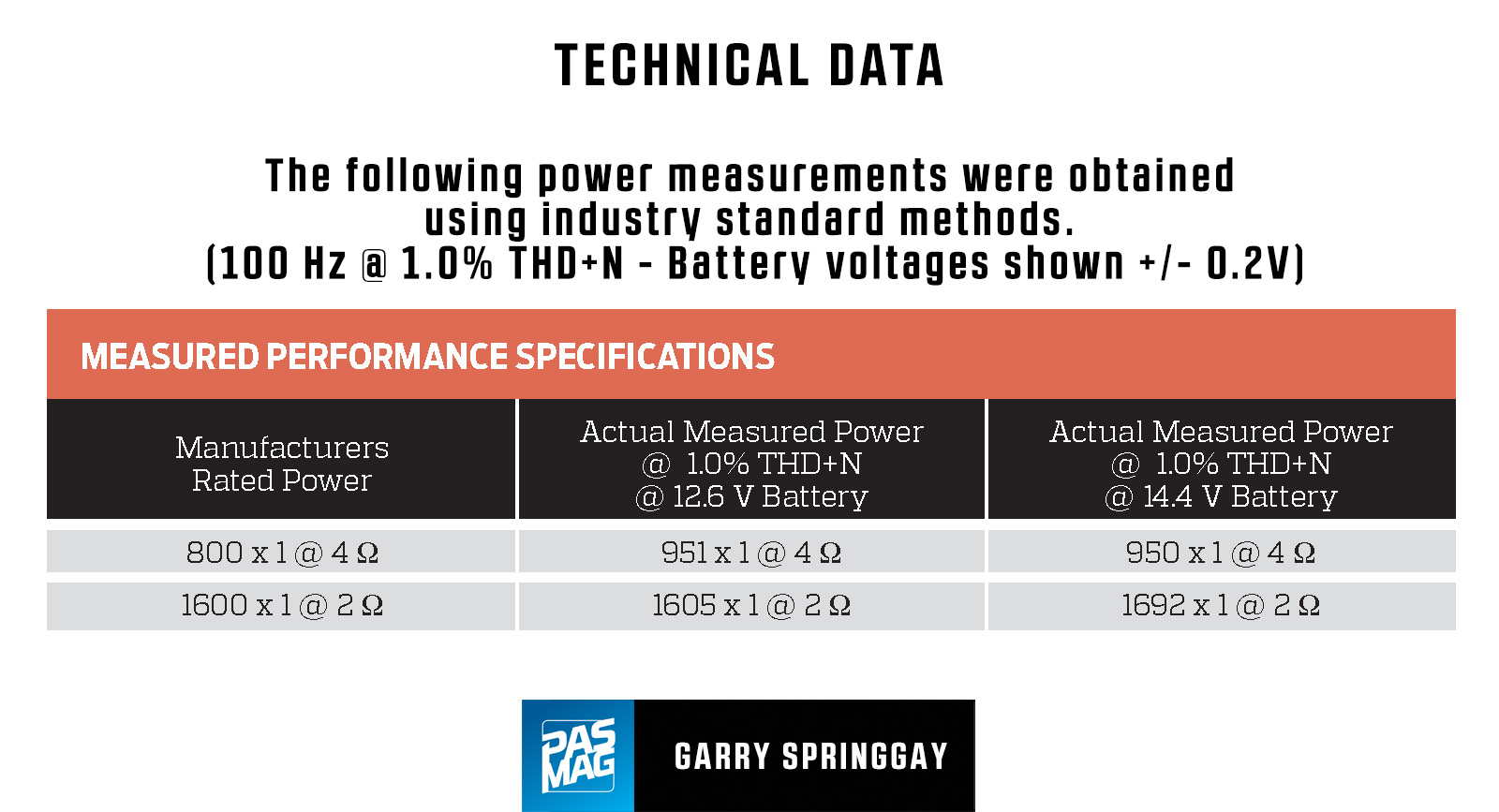