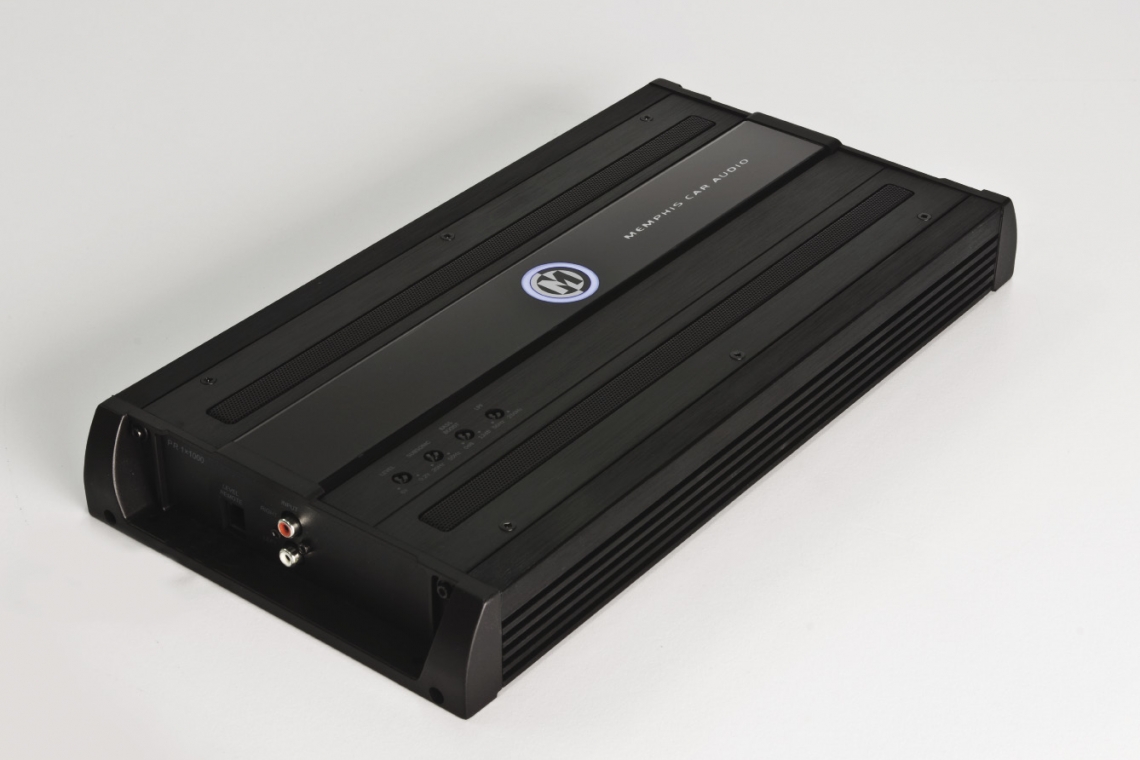 The Memphis Car Audio brand comes straight from “the home of the Blues, and the birthplace of Rock and Roll,” Memphis, Tennessee. While the city of Memphis is obviously steeped in musical history, it might surprise you that the Memphis Car Audio company has some pretty cool history of its own. The original company was known as Arthur Fulmer Radios and was founded in 1964. In the 1970s, the brand changed the name to Fultron and expanded their line of radios and 8-track tape players to include CD radios. Among other accolades, Fultron was the first company to produce a push button FM radio! In 1998 the company changed its name again to Memphis Car Audio and continues to produce award winning innovative products. For this review, we thought we’d put a one of their very popular PR series amplifiers through its paces with the new 16-PR1x1000 Class D monoblock. The PR series offers excellent price to performance value.

The 16-PR1x1000 is the most powerful amplifier in the PR series lineup, but with a suggested retail price of only $469.00, it’s still affordable to pretty much anyone interested in some serious bass power. Power ratings are 320, 580, and 1000 watts at 4, 2, and 1 ohm respectively. The amplifier is actually on the small side for a 1000 watt amplifier, measuring just over 15 inches long by 7.8 inches wide and under 2 inches tall. The amp looks good with a black anodized brushed aluminum heatsink and top cover, with the top cover incorporating 2 strips of fine mesh grille-work allowing heat to escape, and a nice polycarbonate trim panel that has an illuminated Memphis logo to indicate the amplifiers status. All of the speaker and power connections live on one end of the amp, along with a trio of 40A ATC style fuses. The connections are robust and use Phillips head set screws instead of the mundane hex type. Wire gauges for the power connections are 4 gauge, and the speaker connections are dual mono to allow easier wiring and will accept 8 gauge cable.

The opposite end of the amp is home to the RCA input connections, and the RJ-45 jack for the remote level control that’s also included. Controls and adjustments are flushed into the top of the amplifier for easier adjusting, but are actually set back far enough that there is no change of an accidental change of any setting. There are four potentiometers for gain, a 20-50Hz subsonic filter, +12dB of bass boost and a 50-250Hz low pass crossover. The amplifier is mounted via very sturdy ABS end panels with a base that’s ¼-inch thick.

Inside the 16-PR1x1000 I found high quality components and a nicely laid out double sided PCB. The amp uses 0% tolerance laser trimmed surface mount parts wherever possible which results in more consistent and reliable performance. Eight TO-220 case size MOSFETs are used as power supply switchers, and another eight are used for output devices. No big surprises here, but the internals are good quality and the amp looks well made.

After putting the amp back together I connected it into my reference system for some critical listening. The 16-PR1x1000 was connected to a pair of 12-inch 4 ohm subwoofers for a final impedance of 2 ohms. The woofers were in sealed enclosures, so I turned to subsonic filter as low as it would go, and set the crossover for about 80Hz. All the pots are the detented or “click” type so making small adjustments by feel was easy.

I began with some Joni Mitchell featuring the late, great Jaco Pastorius on bass. The 16-PR1x1000 did a great job of producing his amazing musicianship in detail, and because I like to hear his stuff loud, I also noted the amp has plenty of steam for when things get “enthusiastic”. Switching to The Getaway People’s “Mister E” the Memphis Car Audio amp proved it could handle tight bass and retain a warm natural timbre. Considering the amps Memphis roots, I felt it only fitting to pull out some of Booker T’s “Green Onions” and for good measure threw in some Issac Hayes and Otis Redding. The 16-PR1x1000 didn’t care what I played, it just continued to pump out clean, tight bass at any volume I wanted. Over the next couple of hours I listened to a lot of different music from heavy rock and metal to classical and country. At the end of the session, there were two comments that I found repeated in my notes.

The first one was the amps seemingly effortless power. I played some of those tunes at levels that my ears would only handle for short periods, and never seemed to find the amps power limits. The other comment was “subdued output at very low frequencies”. I had noticed on a couple of classical tracks that as things got really down there, (18Hz pipe organ for example) the amp seemed to have slightly less oomph than I was accustomed to. I put it down to an “always on” subsonic filter, and made a note to check it when I got to the bench. One other raspberry in my notes was the difficulty to read the dark gray silk screening on the black top of the amp to figure out which control was which. Granted, once I knew them it was no problem, and I realize the making the text whiter would take away from the clean looking cosmetics, but I actually had to go get a flashlight to see what was what! On a more positive note, the amp had zero turn on or turn off noise, and even though I had beat on it pretty good for a couple of hours, it was barely warm to the touch.