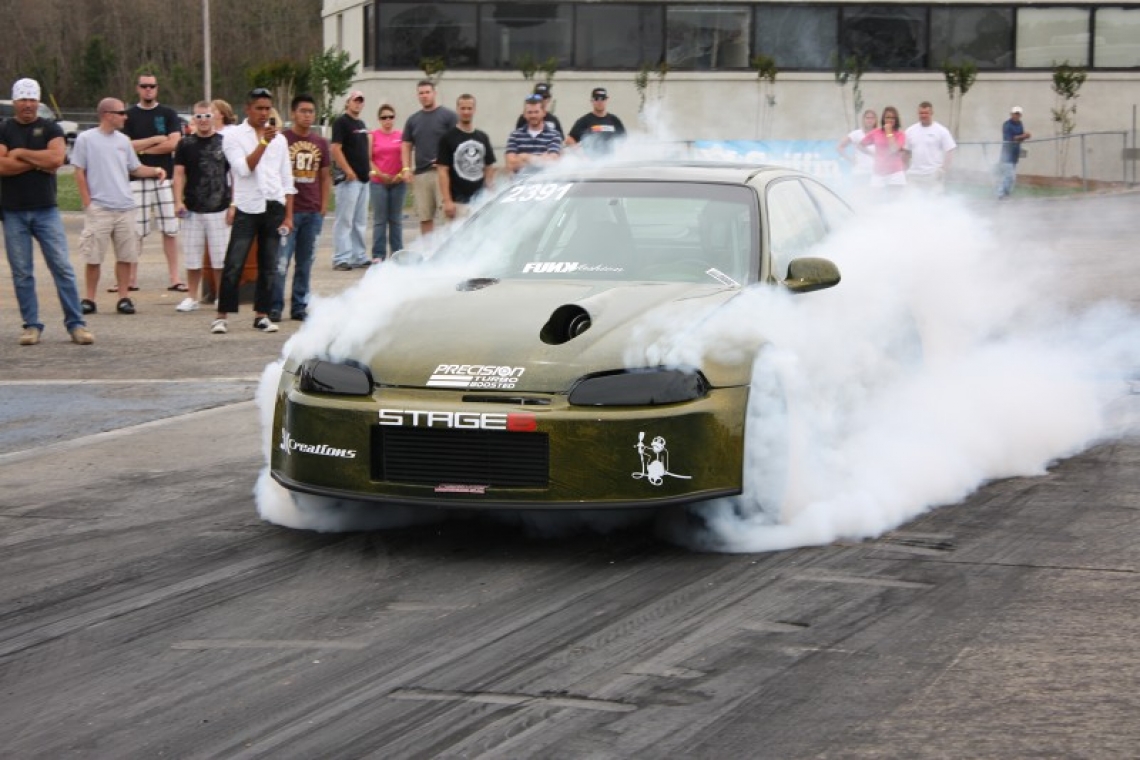 It rained off and on all day at the track, forecast was 100% chance of rain, and it poured down over the entire state.  Even still, the 8th annual Montgomery Import Face-Off was able to go on with a complete day of racing and close to 1000 in attendance. Josh from Usaci says, “Import Face-Off is the only show that can still draw 900+ people in the pouring rain”.  Per track management, about 10 contestants were seen camping out at the front gate at 2am the night before.

The FWD class was won by Cesar Olin of Stage 6 Motorsports from Jacksonville, FL in his gloss green K-series Honda Civic running consistent 9.3s around 157 mph all day.  The suspension is definitely dialed in as his car is one of the only FWDs to hit low 9s without running 160+ mph.  Cesar took our Matt Stover (blue Honda Civic) from Atlanta, GA who went down swinging because of the $100 bounty on his head from winning 2 previous Alabama events.  Matt pushed hard and ended up blowing his motor trying to win this event for a 3rd time in a row.

The All Motor Pro class was won by Alvis Morenta, also of Stage 6 Motorsports from Jacksonville, FL in his gloss green naturally aspirated K-seires Honda Civic running 11.668 @ 117.26 mph against local racer, Spencer Young from Prattville, Alabama in his Acura Integra that ran 11.886 @ 113.9 mph.  All together, Stage 6 went home with $1300+ in event winnings from payouts and bounties.

Forced Induction Pro was won for a 2nd year in row with Sam Collier’s 2JZ Supra powered Nissan 240sx running 10.04 at 139.06 mph against Brian McCarthy’s silver Dodge Neon SRT which only ran an 11.1 @ 128.  The winning Nissan was actually piloted by Sam’s good friend and regular IFO racer, Andy Hollan.  Sam was unable to race because of being in a car wreck the Thursday night before (see pick of his bruised face).  Even still, there will now be a $100 bounty put on Sam’s head for the next event with payout to who ever takes him out during eliminations.

All Motor Sport finals was a Honda showdown with Charles Lindsey from  Mobile, AL in his B20 Civic running 12.370 @ 109.74 mph against Pruchaya Tongkul from Irvington, AL in his H22 powered  Civic running 12.96 @ 101.02 mph.  The K-series revolution has not completely taken over yet!