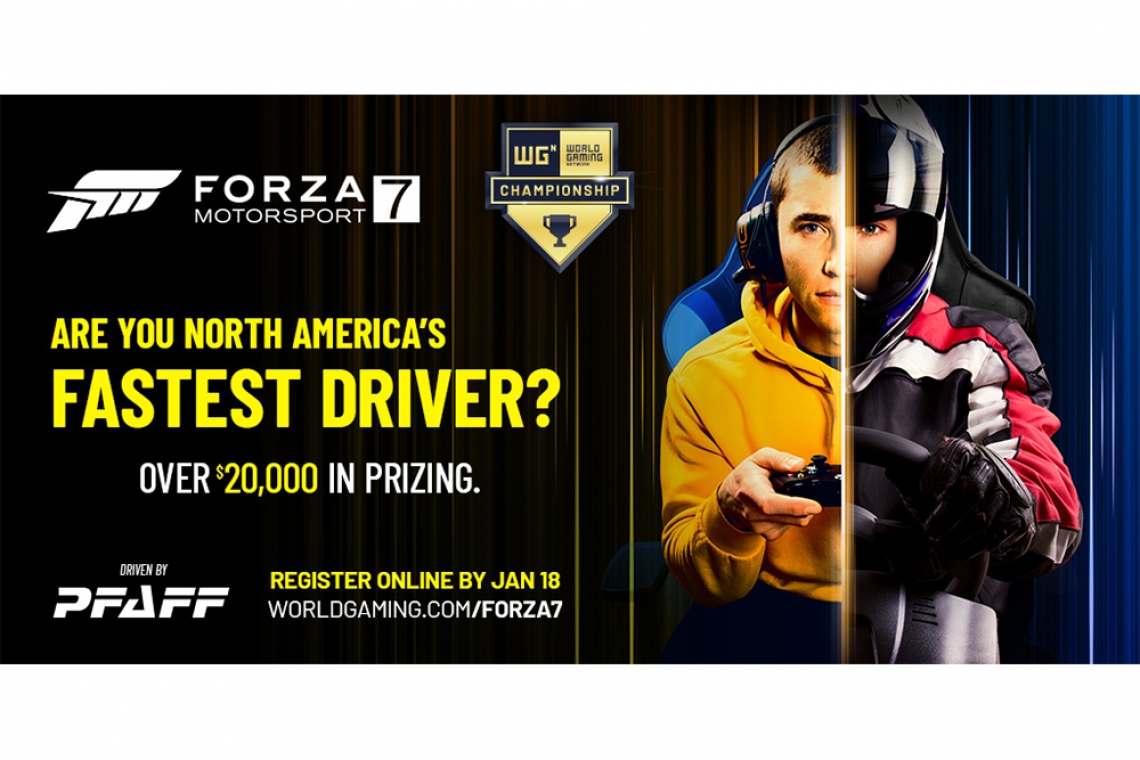 For the second year running, WorldGaming Network will be hosting the Forza Motorsport 7 WGN Championship, driven by Pfaff, live at the Canadian International AutoShow. Qualify online starting December 5th, and at the Show in advance of the finals on February 23rd, when a North American champion will be crowned.

For the second year running, WorldGaming Network (WGN) will be hosting the Forza Motorsport 7 WGN Championship driven by Pfaff, live at the Canadian International AutoShow (CIAS), this year crowning a North American Champion.

The live Grand Finals event on February 23, 2020, will pit the final 16 racers across the United States and Canada, as determined by a series of qualifiers, against one another during one of the world’s biggest auto shows for their share of the $20,000 prize pool.

“Esports is the fastest growing attraction in sports entertainment and last year’s Pfaff Forza Motorsport 7 WorldGaming Network championship was one of most popular features,” says David McClean, Director of Marketing for the Canadian International AutoShow. “The action in the WGN room was furious all week, and we are looking forward to another intense competition at the 2020 AutoShow.”

Beginning today (December 5th), players will be able to register online at worldgaming.com. Online qualifiers will take place on the WorldGaming tournaments platform beginning on January 4th where players will be racing to clock their best times on four select tracks in Forza Motorsport 7. The players with the top lap times will compete in the closed qualifiers, which will take place across two heats. The top four (a total of eight) from each heat will then be invited to Toronto to participate in the live Grand Finals at the CIAS.

For each of the first eight days of the Canadian International AutoShow (February 14th to 21st, 2020), every one of the 360,000-plus attendees will have an opportunity to register their best lap time on the show floor to become one of the finalists. The top eight competitors from the AutoShow qualifiers will make up the 16 finalists that will compete in the Grand Finals on February 23rd.

“We are thrilled to be hosting again our WorldGaming Championships featuring Forza 7 in the footprint of the CIAS, and honored that Pfaff has again signed on as our Presenting Sponsor for the overall campaign,” says Wim Stocks CEO & GM of WorldGaming Network. “In our third year of offering a series of racing/driving competitions, we are seeing enthusiastic interest from participants, racing/driving fans and the media for involvement with our Championship series.”

Players looking to compete in the online qualifiers must be 14+ and legal residents of the U.S. or Canada. For more information on the qualifiers for the Forza Motorsport 7 WGN Championships, head over to the official website at WorldGaming.com/Forza7.

“For more than 50 years, Pfaff has used racing to connect with our brands’ most passionate drivers, owners, and fans – of every age,” says Laurance Yap, Creative Director at Pfaff. “Our partnership with WorldGaming and the AutoShow, now in its third year, continues to extend our footprint into the virtual racing world alongside our growing presence on the North American racing scene, and is helping us connect with and develop the next generation of automotive enthusiasts.”

For more information or to buy tickets, please visit autoshow.ca. Media accreditation to the 2020 AutoShow is now online and can be requested at autoshow.ca/media-registration.