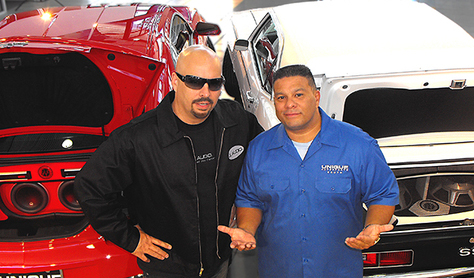 JL Audio (www.jlaudio.com), the world’s premier manufacturer of high-quality audio products, has been chosen as the exclusive supplier of audio equipment used in the new TV series Unique Autosports: Miami, to be executive-produced by Will Castro of Facio Productions, the automobile customizer to the stars.

“My clients and team both demand JL Audio exclusively,” says Will Castro, “because you have to have the best in order to be the best, and my team is designing and creating the best sound systems for my clients.  I wouldn’t have it any other way.”

Carl Kennedy, V.P. of Sales for JL Audio, who has been working closely with Castro and his crew on a variety of projects, had this to say: “Will has built a great clientele, a top- notch crew and a beautiful facility. We expect the new series to be a hit, and to show what great car audio is all about."

About JL Audio
Founded in 1975 in Miramar, Florida, JL Audio is a privately held American company manufacturing high-end audio solutions for home audio, mobile and marine electronics designs. JL Audio products are sold exclusively by specialty retailers throughout the U.S.A. and distributed in 58 countries around the world.  Recipient of numerous awards and accolades, JL Audio loudspeakers, amplifiers and subwoofers have been awarded fourteen U.S. patents for innovative audio technology.

Mobile Toys Inc Tron Inspired Truck Underseat Enclosure
I was drawn to a post from Mobile Toys Inc, one of our partnered dealers and shops (https://pasmag.com/dealers). This Ford F-series Crew cab underseat...

With New Direction, Clarion Marine Relaunches in the U.S. Retail Market
MIRAMAR, Flor., – July 1, 2020 - Clarion Marine is positioned to make 2020 a breakout year by returning to the retail marine audio channel, under the...