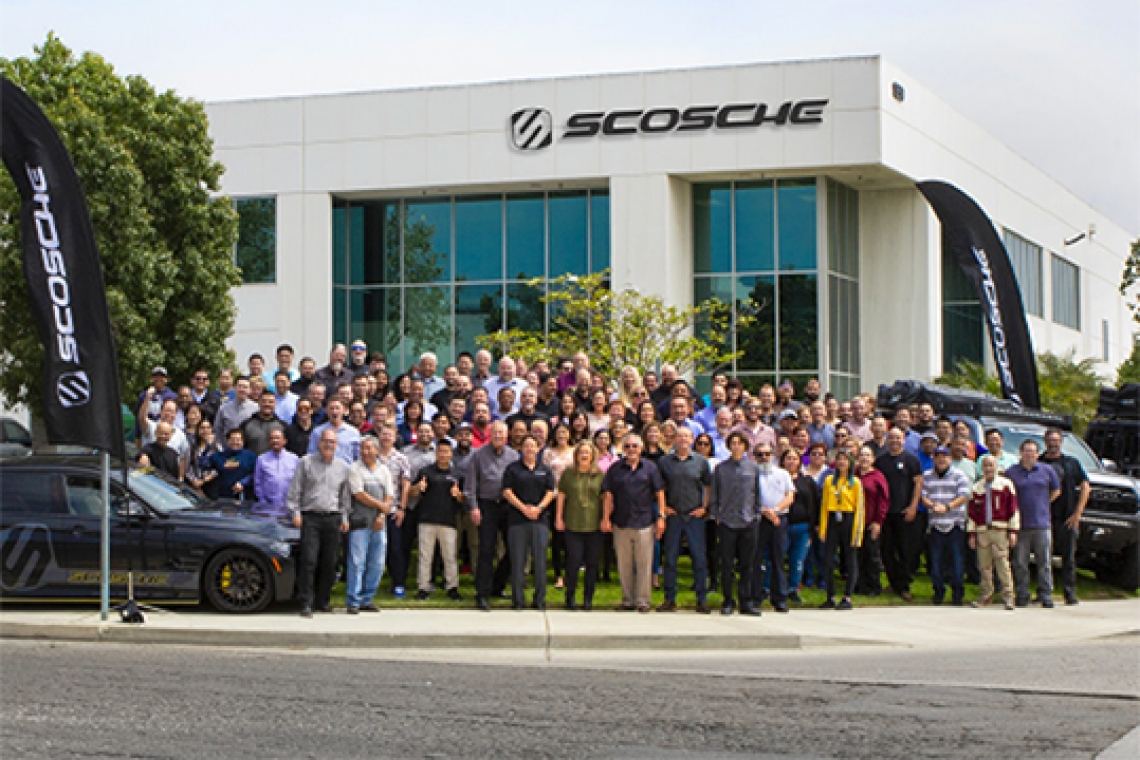 Family owned and operated since 1980, Roger and his wife Scotia Alves started Scosche Industries in their Ventura County garage. The company is still headquartered in Ventura County, California, but has grown to over 200 employees and has achieved many significant milestones and successes over those four decades.

In 1980, as automotive audio consultants, Roger and Scotia Alves published the Autosound Encyclopedia, which is still considered the “Bible” of the car audio industry. By 1984, they had earned their first patent for their General Motors multi-purpose dash kit, revolutionizing the DIY car audio business for retail. EFX, Scosche’s high-end line of car audio accessories was introduced in 1990. Roger and Scotia’s sons Kas and Vince joined Scosche in 1995 and 2000, respectively, and are now Co-Presidents. Kas’ son Ryder joined the family business in 2018 as Marketing Assistant and Video Editor.

In 1996 the Alves created the SoundKase™ brand which was the kick-off for a highly successful line, which included: a 12 DVD/CD Visor Organizer, storage cases, seat back organizers, CamKase camera bags, and SoundSak audio backpacks. All SoundKase products utilized a unique and patented non-scratch CD pocket system. This development moved Scosche squarely into the Consumer Technology (CT) Accessories arena, an exciting and successful new direction for the company. By 2005, now firmly established in the world of CT accessories, Scosche introduced BlueLife® – the first to after-market streaming audio and hands-free Bluetooth® car/headphone/home kits.

With the growing popularity of Apple® iPods®, iPhones®, and iPads®, Scosche used their “User Innovative” inspiration to design and create the “Accessories for Life” consumers needed and wanted.

Along with their successful CT business, Scosche continued to innovate on the automotive and audio side, introducing their Realm™ Audio line of high-end headphones and earbuds; and car audio speakers, amplifiers and subwoofers, designed for specialty and custom car audio shops, at the 2007 CES.

Together the Alves directed and inspired the first BoomBottle® portable wireless speaker designed to go anywhere, along with creating the slogan “Where Do You Take Your Music?™”. Revolutionizing the health and fitness electronics trend, Scosche introduced the MyTrek™ Armband Heart Rate Monitor and app.

In 2012 Scosche introduced “AppCessories” – apps that integrated Scosche products with the sophisticated new smartphones hitting the market at that time. A record seven Scosche products were honored with CES Innovations awards in 2012.

A huge year for new product releases, in 2012 Scosche amazed CES attendees with a host of new audio products, including headphones, earbuds, and innovative new Bluetooth FM transmitters and portable and rugged BoomBottle Bluetooth speakers. The new smartphones pulled more power, so Scosche responded with powerful portable backup batteries like the FlipCharge™ burst. Numerous mounts, cases and docks for iPhones and iPads were demonstrated that year, as Scosche revealed themselves to be the comprehensive accessories solutions company.

As smartphone sales boomed so did Scosche’s ideas for accessories. The Alves reinvented the cell phone mount business with the launch of MagicMount™ line of magnetic mounts for smartphones and other portable devices. By 2015, the popularity of MagicMount had elevated the company to the #1 Mount Brand in North America ranking, as reported by The NPD Group, Retail Tracking Service. Scosche has retained that prestigious #1 Mount Brand spot continuously from 2015 to the present day.

At the 2020 International CES, Scosche is launching more than 150 new Consumer Technology and Connected Car products. Trends change frequently, as do the ways in which people use and interact with technology, so Scosche remains ever nimble. It’s this spirit of innovation and adaptability that started Scosche, and continues to keep their products fresh, relevant, and award-winning, for forty years and counting.

Fun Fact: Scosche has exhibited at every CES since 1984, including this year (Booth# 30306). If you are at the show, you may even have a chance to congratulate Roger, Kas, Vince, and Ryder Alves in person.

AudioControl Announces 2019 Rep of the Year Awards for Mobile Electronics
AudioControl has recognized ten of their sales rep firms for outstanding performance in the mobile electronics market for 2019. Each of these...