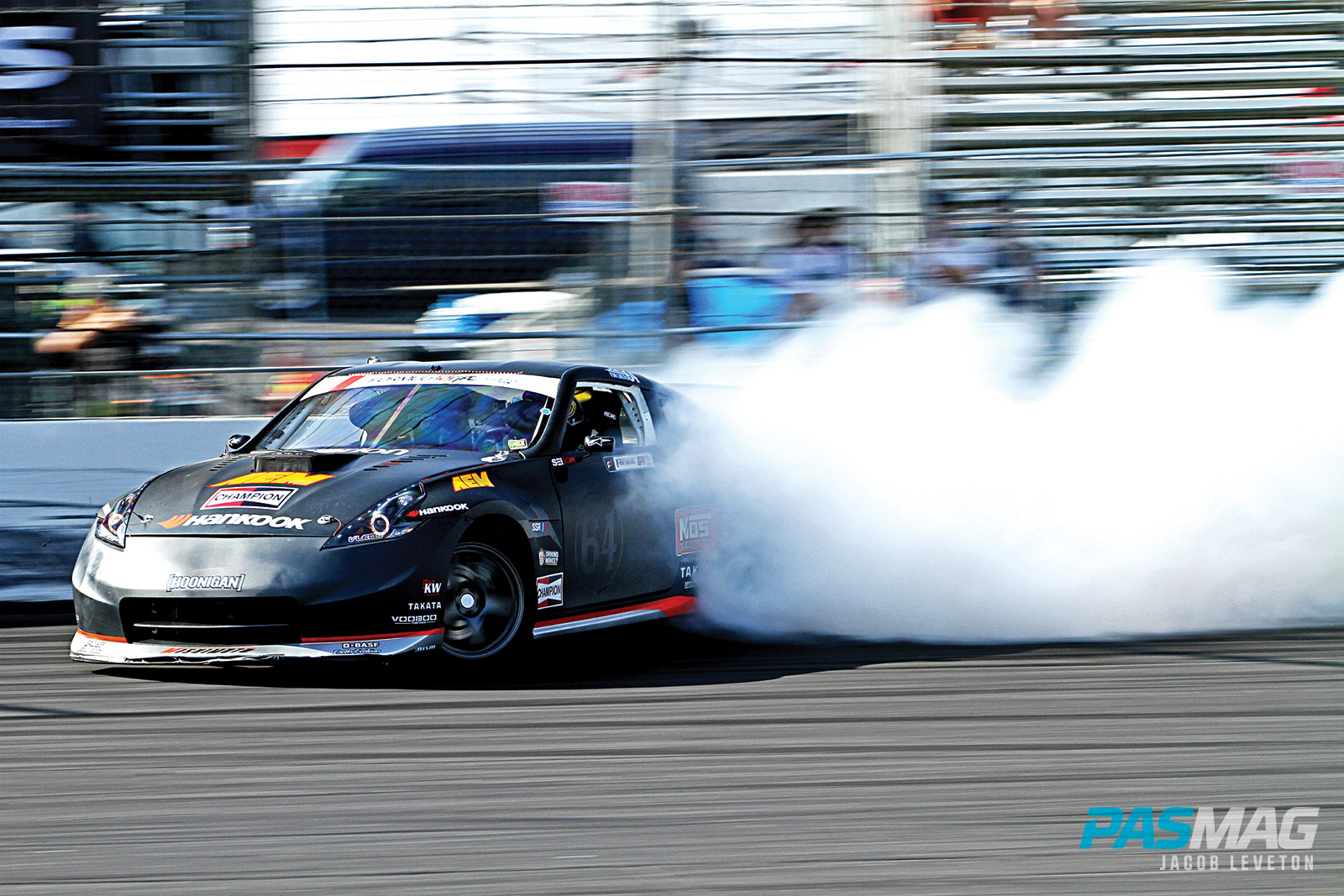 Formula Drift’s 11th season of competition was the most exciting to date, with the championship coming down to the final tandem battle at the final event. Daigo Saito’s elimination of Fredric Aasbo in the finale clinched Chris Forsberg’s second career championship, but all three drivers earned awards at the annual Formula D awards banquet. As Formula D launches a world championship for their 12th season in 2015, we take a quick look back at some of the highlights from the 2014 season. 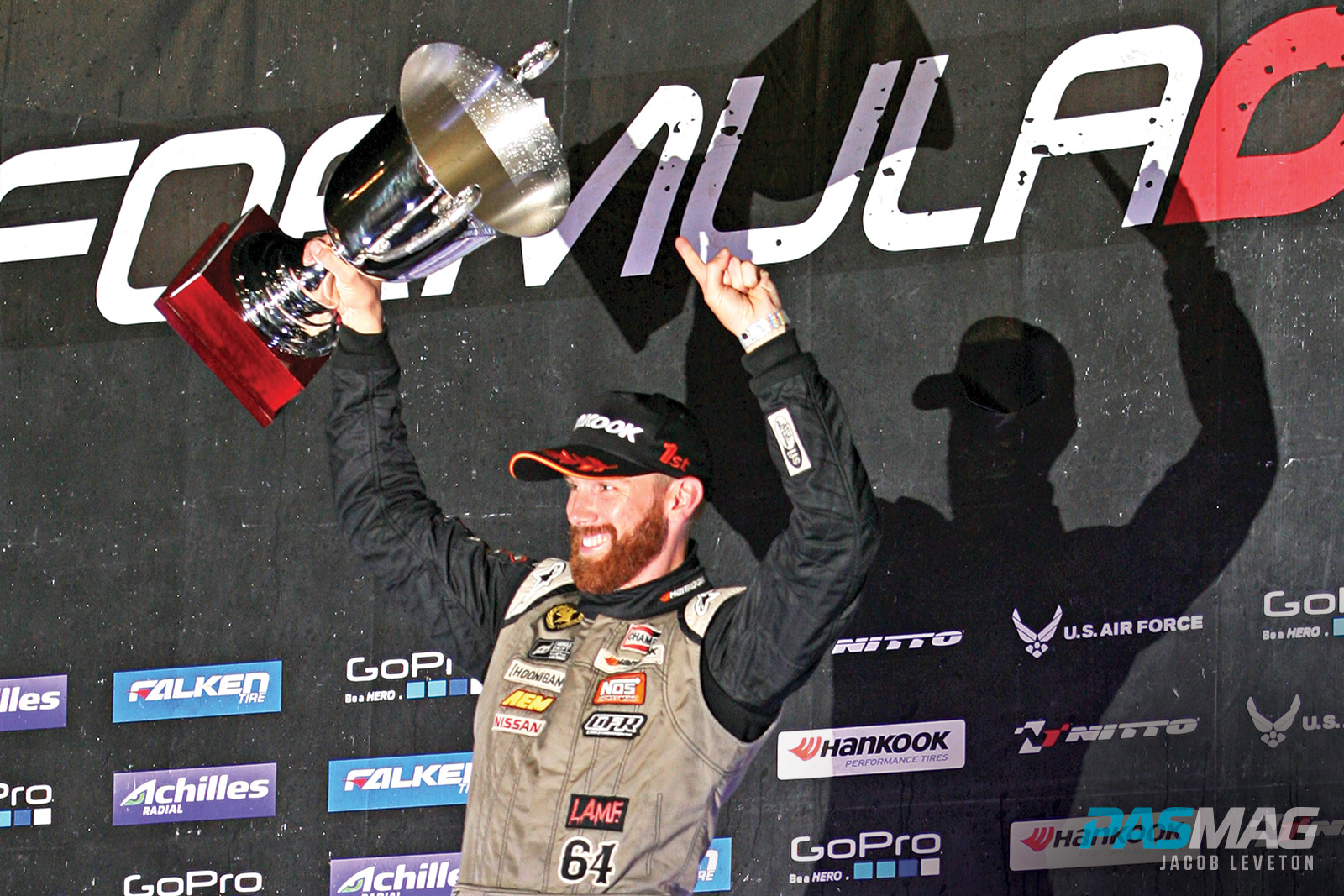 Forsberg’s second championship is his most notable accomplishment (alongside his 2009 title), and adding to that, he also earned Best Qualifying Driver for 2014. Put simply, his championship would not have been possible without the points he earned from qualifying. Amazingly, Forsberg qualified first or second at three out of the seven rounds of competition, and never qualified outside of the top 10. Forsberg’s 2014 was highlighted by becoming the first driver to finish on the podium at five consecutive events. He only finished outside the top four at the season finale in Irwindale, where he came in a humble fifth place. This season marks the third time in the last four seasons that Forsberg has finished in the top three of the final points standings, so there’s no doubt he’ll be an early favorite for the 2015 season. 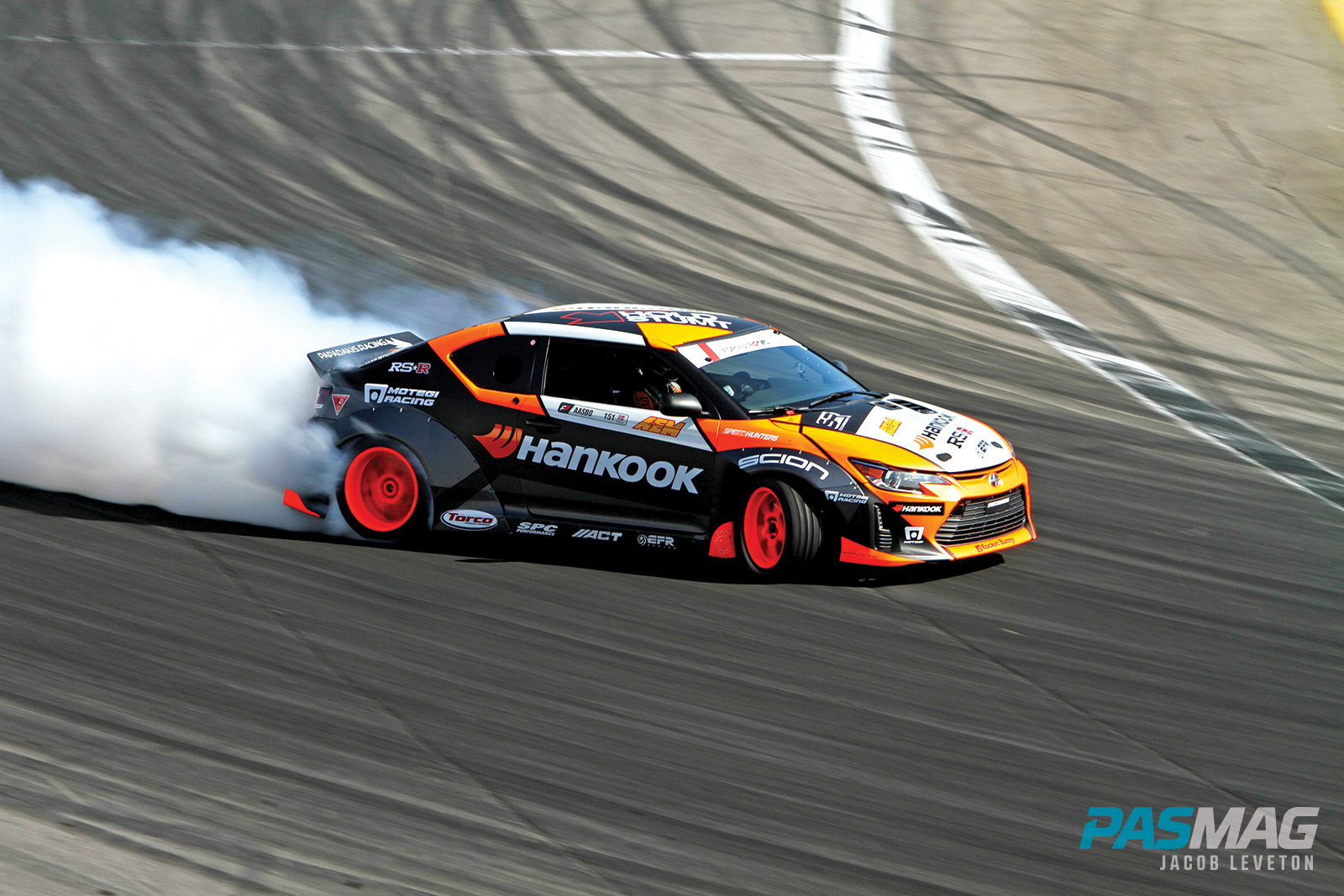 Despite coming second in the championship, Aasbo was one of the most decorated drivers at the FD awards banquet. Since his rookie season in 2010, Aasbo has continually improved on his overall championship standing, progressing from 13th in his rookie-of-the-year season to second in 2014. Most impressively, Aasbo won 25 of the 30 tandem battles he faced in FD competition, for an 83 percent winning rate. His biggest accomplishment of the season was earning his first event win in New Jersey, which he repeated just two events later in Texas. Word in the pits is Aasbo will be back in his Scion tC for the 2015 season, with an improved engine package that should be pushing the limits of 1,000 horsepower - from just four cylinders.

Dan Savage first emerged as a serious contender in the Pro 2 series when he piloted his Sikky Manufacturing RX-8 to a second-place qualifying effort and overall event win at the second round in Seattle. Overall consistency and a top qualifying spot at Irwindale helped Savage claim the first-ever championship in Pro 2.

As the only Dodge Viper in professional drift competition globally, Dean Kearney has faced plenty of challenges. After years of trials and tribulations, Kearney earned the first podium of his Formula Drift career in Seattle with a second-place finish, then repeated that effort at the Canadian exhibition round just a few weeks later. Overall, Kearney was the most improved driver based on the final standings, moving up from 29th in 2013 to eighth in 2014. He is another driver who is said to be back in the same chassis for 2015, with a few upgrades to help put the V10's 1,000-plus horsepower to the ground more effectively.

This award is designated for the driver who qualified lowest, yet finished the highest on the season. Coincidentally, this award also mirrors Daigo Saito’s season as a whole. After getting knocked out in the top 32 round at the first event of the season and failing to qualify in Miami for the first time in his Formula Drift career (and again in Seattle), Saito looked to have written 2014 off completely. At Irwindale, Saito crashed on his first qualifying run and appeared on the verge of not qualifying again, before squeaking into the competition in 29th position. That was all Saito needed as he went on to win the event - his third consecutive victory at Irwindale. Amazingly, no driver has defeated Saito at Irwindale in tandem competition since he entered Formula Drift as a rookie in 2012.

For the second consecutive season, Hankook Tire claimed the tire championship, with four drivers contributing to the effort. Aasbo and Forsberg's constant battle for the championship put Hankook in good position for the tire fight. Hankook drivers took home 11 of the possible 21 podium trophies on the season, including three event wins and five top qualifier awards. Forsberg, Aasbo, Tyler McQuarrie, and Forrest Wang all contributed points to Hankook's prestigious award. 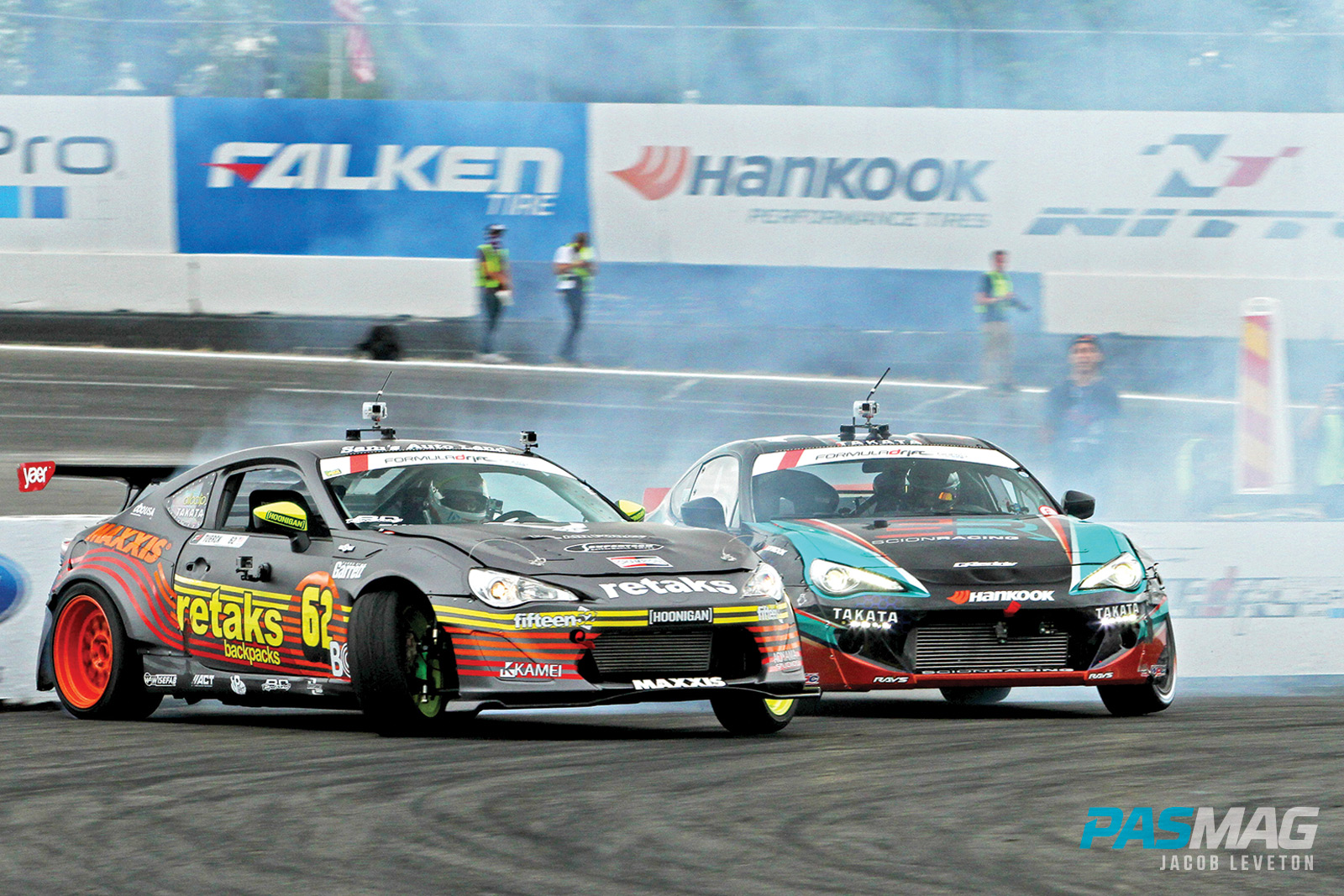 After finishing fourth in the OEM Championship race in 2013, Scion had a tremendous rebound season in 2014, earning the overall OEM Championship title. With four different drivers on the grid driving RWD Scions, the brand, once known only for their FWD cars, has now become a powerhouse on the FD circuit. Fredric Aasbo, Ken Gushi, and Ryan Tuerck all contributed points towards this championship, one that should be highly coveted by the manufacturer. Aasbo also earned the first event win for Scion and brought home four event trophies in total (two wins and two second-place finishes), and finished second overall in the championship chase. 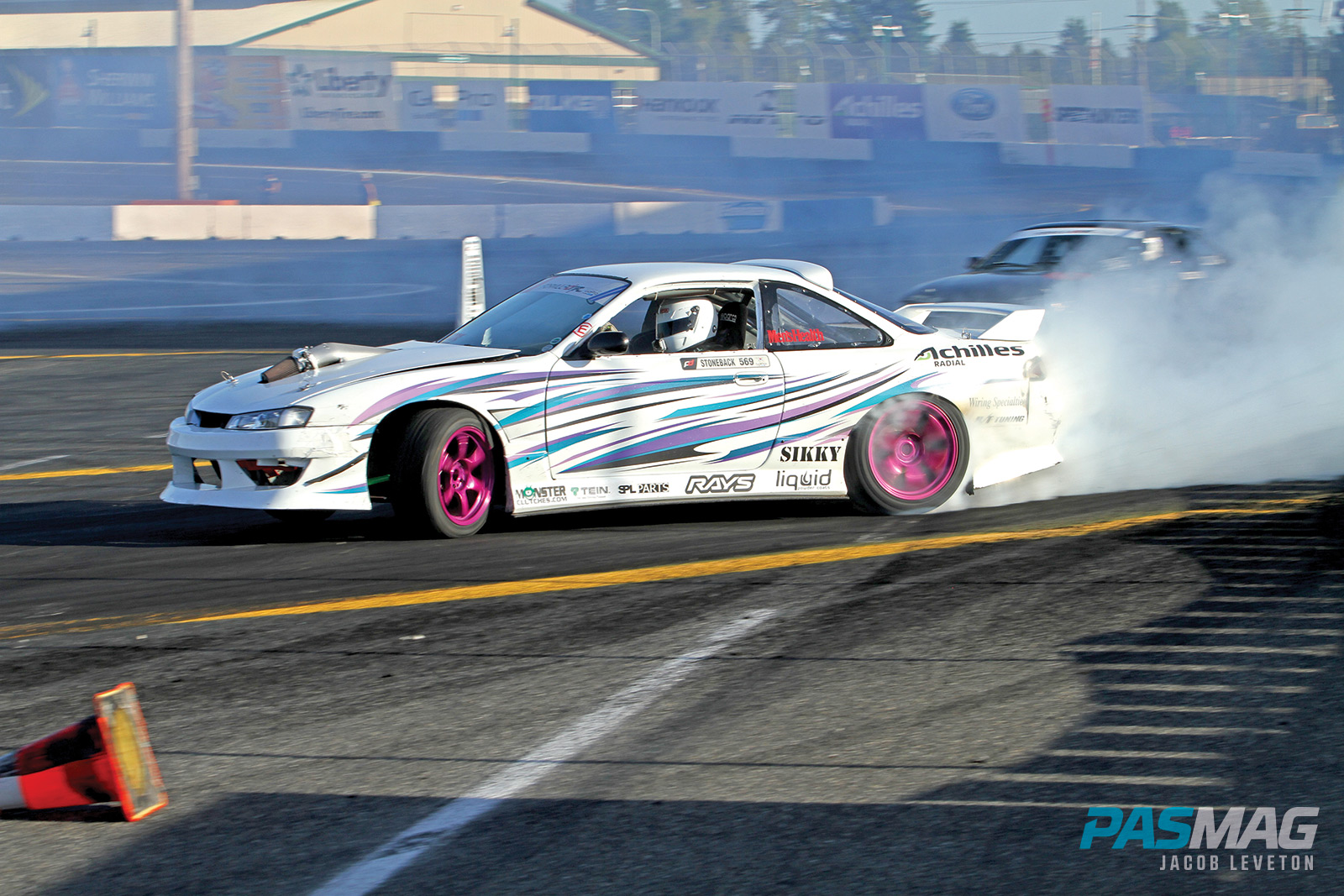 At the start of the season, the 2014 rookie roster didn’t appear to have any standout names. Six of the previous seven ROTY winners came from international series, and without any major international competitors, the 2014 award seemed up for grabs. Stoneback rose from the pack to take control early in the season after being the only rookie to qualify at the first two events, and ended the season qualifying at six of the seven stops, including a top-eight appearance in Miami. Stoneback also was in contention for the inaugural Pro 2 championship up until the final round at Irwindale, showing that he could be quite the competitor in the coming years. 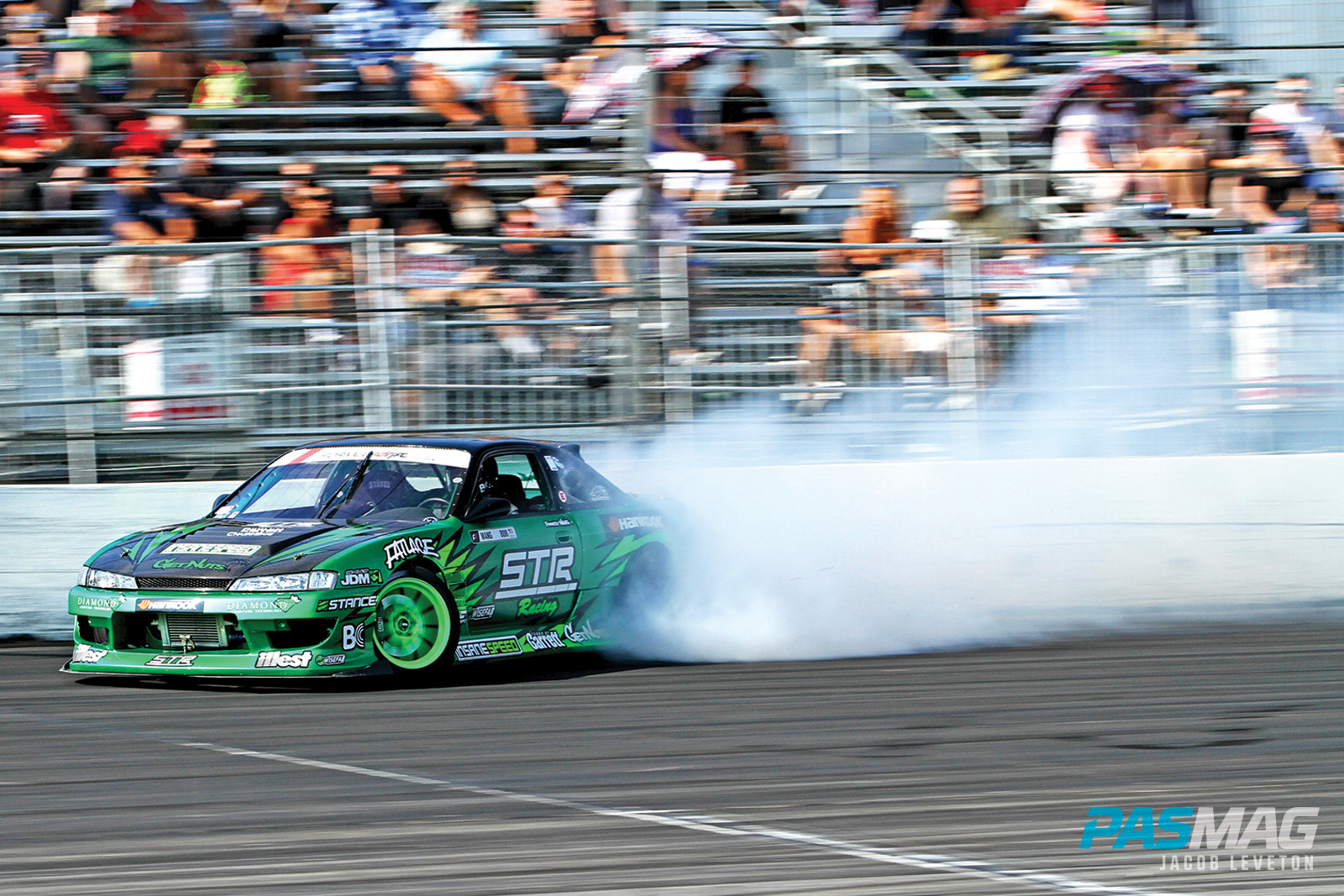 Forrest Wang was another driver to have a breakout season in 2014. Building on his first career podium at the season finale in Irwindale in 2013, Wang strung together three top qualifying runs (including bests at the final two events in Texas and Irwindale) and two podiums (again, at Texas and Irwindale), taking strong momentum into the 2015 season. More impressive is that the Spirit of Drifting award is voted on by his fellow drivers, while the Fan Favorite award is voted on by the fans. He's gained a lot of respect from both sides of the fence, and rightfully so.