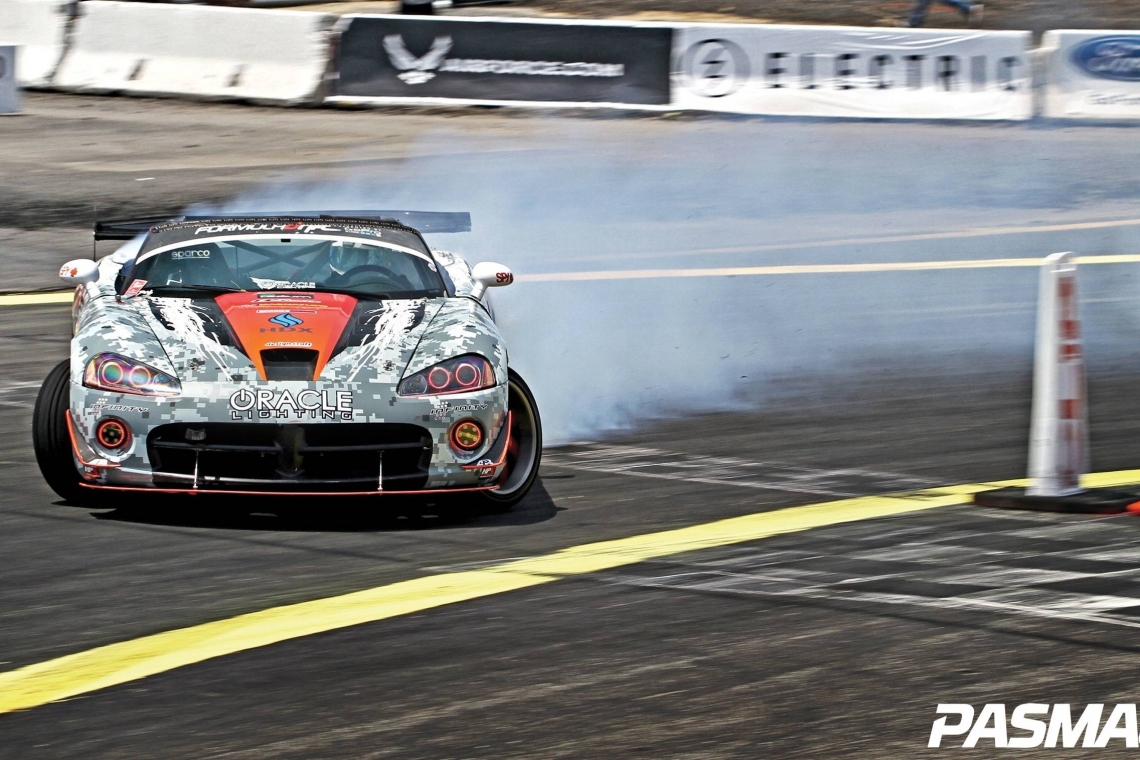 The 2012 season was a rough one for Dean Kearney. After finishing his sophomore year 20th overall, team owner Sam Hubinette decided to move away from drifting and try his hand at rallycross. Unable to find a ride, Kearney knew he had to take matters into his own hands. He struck a deal with primary sponsor ORACLE Lighting to build a car for 2013 and beyond. With knowledge from driving Hubinette’s Viper, and some close contacts who understood the chassis, Kearney purchased a Viper road race chassis and started transforming the car into a drift monster just six weeks before the Formula D season was set to start.

In a short while, Kearney and the team at Designcraft Fabrication in Huntington Beach got to work, prepping the car to meet the Formula D specifications. Sheet metal was trimmed to the extent of the rule book, making room for a C&R radiator and EMP electric fuel pump in the trunk, and a fueling system consisting of a Bosch 044 fuel pump, Radium Engineering fuel swirl pot, and an array of HPS hoses. All other metal from the rear of the strut towers was removed. In the cabin of the roadster is a full Formula D-legal roll cage, including foot intrusion bars and an ORACLE light bar which stretches across the main hoop and acts as a third brake light. The interior includes a pair of race ready Sparco Pro 2000 seats and harnesses, and the dash has been stripped of most amenities, with carbon fiber sheets blocking off all major openings. An AiM dash keeps an eye on the happenings under the hood, with a slew of switches to operate the necessaries within arms reach. A custom hydraulic E-brake handle controls the Wilwood secondary caliper under the rear wheels, while a Sparco shift boot is mated to the OEM Viper shifter. Along with the DJ Safety fire suppression system, the cabin is complete from a race car perspective.

Under the hood, the 8.3L Dodge V10 makes even the largest V8 motors look miniature. There’s just enough room between the motor and strut tower for the Paxton supercharger, which ups the horsepower to over 900 ponies and 700 lb-ft of torque. The drivetrain has been overhauled by Brian Crower, with JE pistons pushing the crank up and down in the cylinders. Air starts through the K&N filter before hitting the supercharger, and is pushed out of the engine through a custom set of Magnaflow headers and a custom magnaflow exhaust. All of those horses are feathered through an OS Giken clutch and flywheel to a four-speed G-Force dogbox transmission. Tuning is handled via an AEM Infinity standalone ECU, tuned by the team at Portland Speed Industries out of Portland, OR. Under each corner, Moton remote-reservoir shocks are mated to custom Eibach springs keep the car planted, while some “Karnage special” steering modifications give the Viper the angle it needs to be competitive.

While drifting is all about attacking, clipping, and going sideways, you also have to look good doing it. Daley Visuals was responsible for the livery design and application, which makes the Viper stand out even more from the pack. The white and grey digital camo and orange accents make it look tough as nails, and the long hood scoop is wrapped in orange to give the Viper some mean fangs. An APR splitter and winglets give it just enough downforce at the front of the car, while an APR rear wing helps keep the rear wheel drive system connected. All the APR goodies are trimmed in orange, including the front and side splitters, making for a drift car whose visual details definitely match the performance.

The style cues continue with a load of accessories from Kearney’s title sponsor, ORACLE Lighting. The Viper’s glaring gaze is even more menacing with the addition of the orange Halo headlights and fog lights, which are paired with the light strip eyeliner underneath the headlamp assembly. ORACLE even whipped up some custom taillights that tandem challengers can admire through the tire smoke. The USW Forged Tracker modular wheels are dressed in matching orange to round out the details and meet the heavy demands that Kearney puts through them. Achilles 123S radials provide the same grip that power past Formula D USA and Formula D Asia champion Daigo Saito.

Despite all of the many changes Kearney made to his program, the 2013 campaign proved to be another difficult one for the Irishman, as he finished 29th overall in the final standings. His season did end on a positive note, however, with a sixth-place result in the season finale at Irwindale, his best finish of 2013.

As the 2014 season dawns, Kearney will be looking to build on the strides he made at the end of last season and continue to climb through the ranks of Formula D. 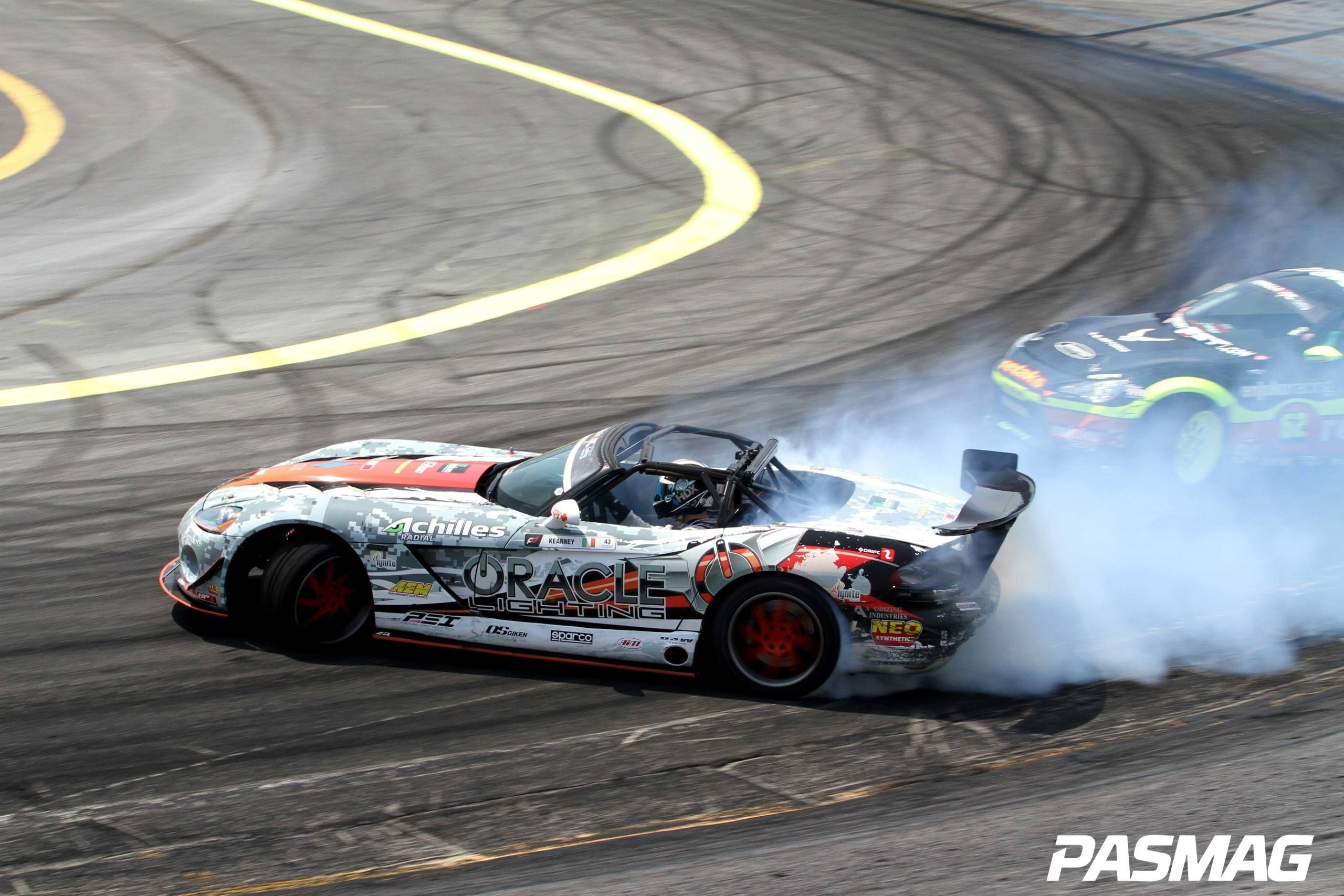