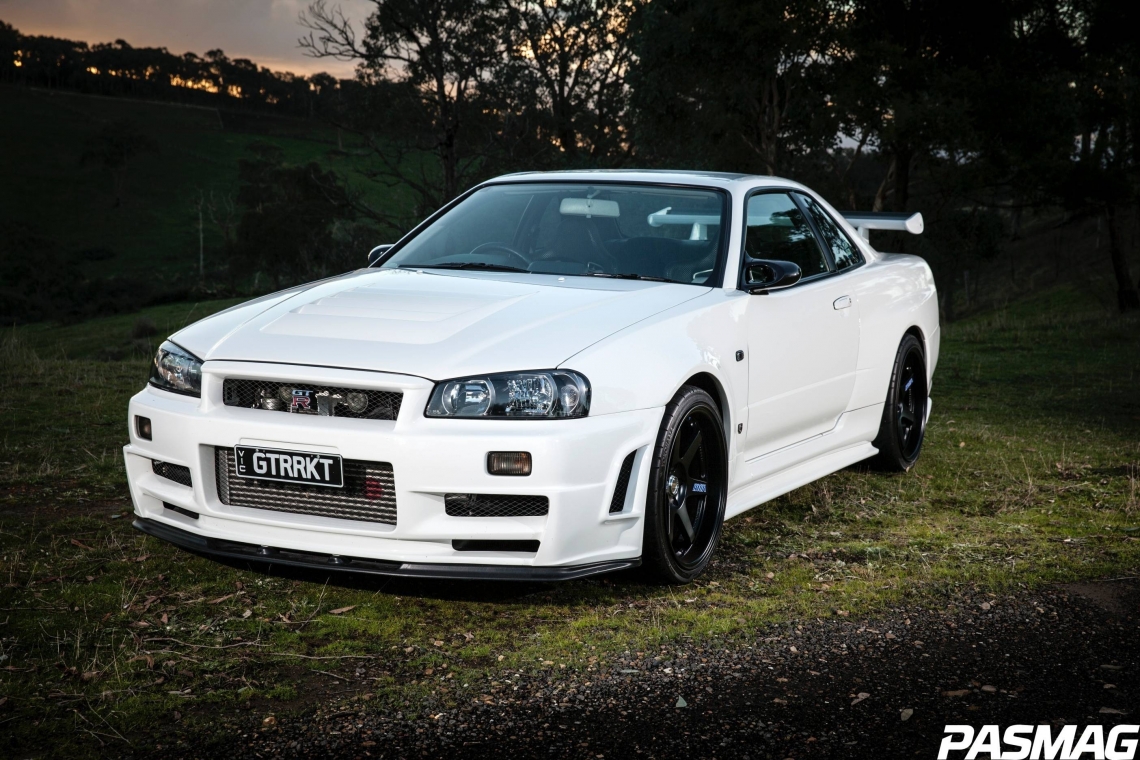 It’s fair to say the Nürburgring special edition GT-R is rare. There are only 750 V-Spec II Nürs made by Nissan in honor of the world-famous racetrack the GT-R was developed on. Out of the box they perform much higher than the standard V-Spec (Victory Special) with an N1 engine developed for Super Taikyu production car racing in Japan. The larger turbos with steel exhaust turbines allow higher boost to be fed to the puffers more reliably than ceramic turbines. Leaving the factory with 30kW more power, there’s an extra level of fun compared to the usual GT-R and a stronger, more reliable base for tuning it new heights.

The previous owner of this example was not content with leaving it stock. The current owner, Chris Neumann, had dreamed about owning an R34 GT-R since his early teens. I asked him if he was the one with the creative idea for the licence plates or if it was the previous owner’s choice.

“I actually thought of it myself. I got these plates for my 14th birthday,” Neumann proudly states.

He held onto that dream and made it a goal to own an R34 GT-R someday. At the age of 22, he noticed this white dream cloud of rev-head heaven and had to have it.

It is Neumann’s absolute dream car. The R34 is one of the most popular Japanese performance cars, even 11 years after production ceased. He has no intention of spoiling his dream, so the car stays garaged most of the time. Less than 19,000 miles on the clock, the car still smells new and Neumann has only clocked 1,900 miles since taking ownership two years ago.

It looks tough to begin with. The aggressively offset Volk Racing TE37s give it impressive stance. Look through the spokes of the front wheels and the six-pot AP Racing calipers begin to tell a story that this is no ordinary road rocket. The carbon mirrors are a cool touch and provide aerodynamic performance. The fenders are attention grabbing too; they are Nismo Z-Tune items that not only make it look like a monster but actually vent hot air from under the bonnet. There are slots on the inside of them that channel air to the outer top side just before the wing mirrors.

The front bumper is harder-edged than the usual GT-R. This version from the Z-Tune has its nostrils fared like a raging bull to grab as much air as it can stuff into its cooling systems. The body kit? All R-Tune! Carbon bonnet, side skirts, rear apron, grille and dry carbon rear wing flap with gurney complete its aero performance and styling.

Looking at the rear, the exhaust pipe looks conservative with twin pipes from the muffler. But when Neumann turns the key and the engine ignites there’s an abnormal note. Most of the exhaust pipe is four inches in diameter, but it’s not just that. There’s an unstable burble. It’s the kind of burble that comes from a lumpy camshaft. I start to think even further about the pain the tyres must feel at full throttle. With bigger turbos than the already up-rated Nür pair along with cams, the power output appears to be well over 350kW.

When it’s time to pop the feather-weight hood, it’s the kind of conservative appearance you would see on a Mine’s car. The air box, intercooler pipes and other bits and pieces are all in the standard locations. I quickly notice the materials though. There’s a Garage Defend GT carbon-fibre radiator cooling panel, a wide Nismo R-Tune air intake and an Auto Select aluminium strut brace. The polished Nismo turbo pipes grab my attention – and then of course – the engine. The black painted HKS rocker cover with V-CAM module suggest the heart of the beast ticks with more power. In fact, it’s over double at 588 kW!

The fuel is squirted by Sard 700 cc injectors in conjunction with an HKS V-Cam Step 1 Type-A kit and exhaust gas is helped out by the HKS camshaft. The gas travels through Tomei exhaust manifolds to the big Garrett 2860 turbochargers that include strengthened waste gates. Tomei outlet pipes then carry the gas to the four-inch pipe through to the rear.

A Nismo lightened flywheel and twin-plate Super Coppermix clutch see that power gets to the Getrag six-speed gearbox without a problem. The all-wheel-drive setup distributes the power accordingly. The white beast has its ATESSA-ETS Pro AWD system disabled and it’s set to constant all wheel drive. This is intended to make the car behave more predictably, but even on the race track the car wants to oversteer.

Neumann admits he hasn’t come to grasp the full power of the GT-R yet. But it’s not a case of him being scared; he simply has a high level of respect for it.

This GT-R is basically a road-registered race car. It’s a complete package. The engine is built for reliable power with an expanded cooling system, the brakes are massive. All the modern conveniences remain and every modification has been done with a holistic approach, keeping his dream car clean and true to its roots.