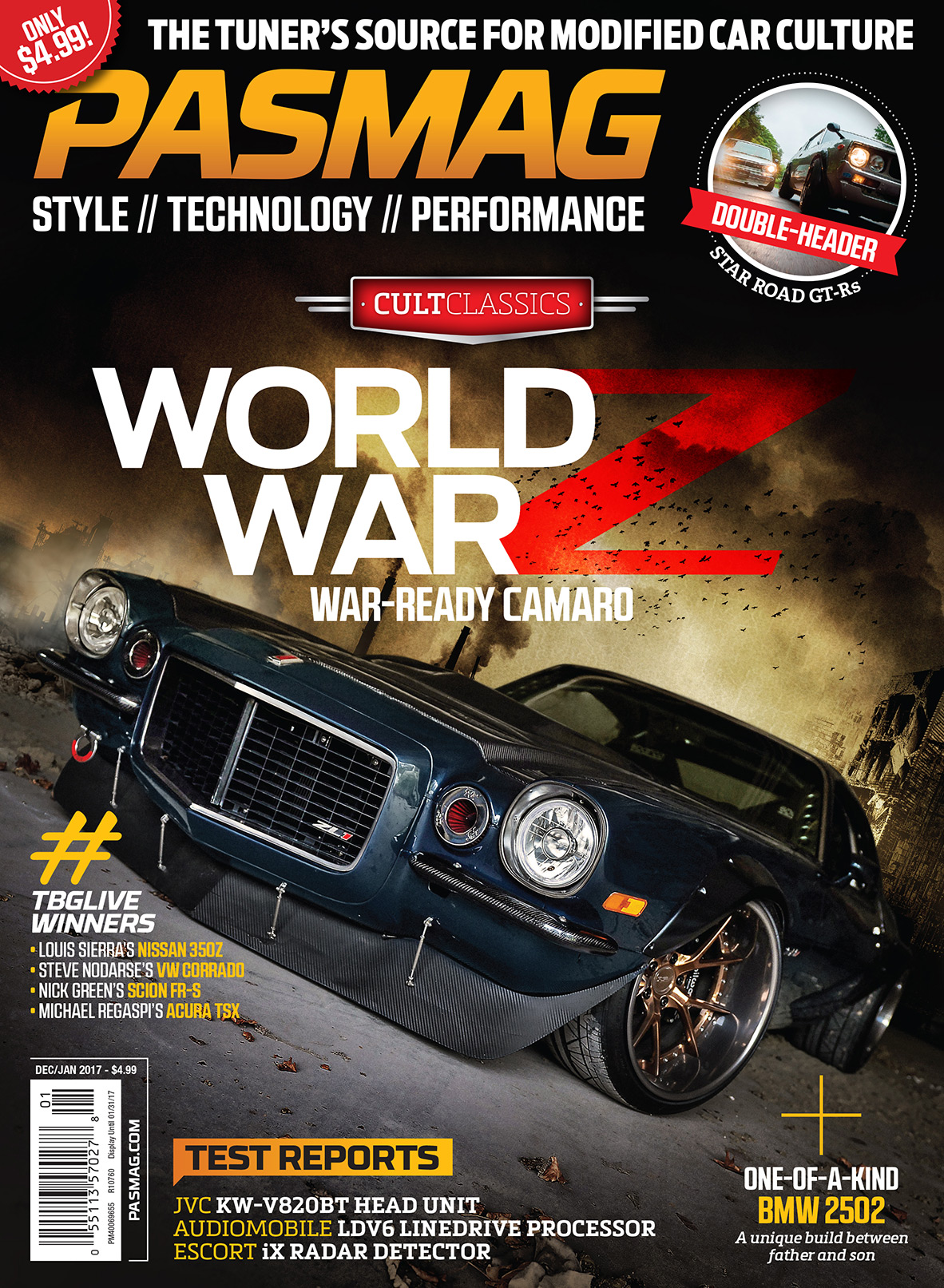 Classic Rewind. Throwback Thursday? That’s weak, bro. You can take your hashtags and kick rocks because PASMAG is making the last month of 2016 and the first month of 2017 and making it all a look back at some of the tuning world’s classic platforms. Think of it like a reflection, and maybe a little inspiration for the new year.

Of course, the nostalgic tones are just a seasoning on your usual iteration of PAS. The same players are still here, in the form of our columnist team, delivering the topics you love to read about. In Jacob’s Drift, Mr. Leveton takes a look back at some of the drifting world’s top contenders and their first wins or podiums in the FD series, while Rob “Stay Crushing” Kochis (totally his new wrestling name) starts wrapping up his FR-S build with some pretty serious performance parts and upgrades. Garry Springgay got a little excited about this issue and wrote about restoring a friend’s truck, and teases some similar work he may be up to soon, instead of his usual audio-focused column. No worries though, Garry has three Test Reports in this issue to let you know what’s good in the mobile electronics world these days.

You also might notice that Adam Zillin’s usual column is missing, and that’s because we had him do something a little special this time around. See, Zillin got his hands on some exquisite examples of classic GT-Rs - one a Kenmeri, the other a Hakosuka – and both have been treated to the specialized tuning and restoration process of Inoue-san at Star Road. You may as well wear a chin strap while reading to keep your jaw off the pages as you read.

We’ve also got a BMW 2002 (now affectionately named the 2502 for reasons you’ll soon learn in the story) that has been a 10-year labor of love between father and son. This is old school building and ingenuity at its finest, guys. So much respect for this car, build, and the people involved. Read up on this, and then go call your dad!

I guess I’ll take a wild stab and guess that you picked up the mag because the meanest Z28 Camaro you’ve ever seen was glaring at you from the cover. That car has that effect on people. Is it because people are drawn to its sinister aggressiveness, or because they know it’s their savior from the upcoming zombie apocalypse? We can only guess that it’s a mixture. Read on to see exactly what makes this machine tick and boom.

You’ll also find the usual bits and pieces of news that mattered most to us, as well as event coverage and the builds you should keep your attention on. Otherwise, hop in the DeLorean, hit 88 mph, and take a little trip with us as we throw it back to some of the best tuning platforms of JDM, Euro and USDM Legend. #pasmag

Micky Slinger
PASMAG Editor
This email address is being protected from spambots. You need JavaScript enabled to view it.

Dress Up Bolts Stage 2 Titanium Hardware Engine Bay Kit - Subaru WRX/STI (2015-2021)
This is the ultimate hardware replacement kit for the Subaru WRX/STI (VA) models! The most notable addition to this kit is that we used our widebody...

PASMAG #163 (Car Audio Upgrade Guide, 11th Edition)
It has been a while since we featured a Supra on the front cover of PASMAG, so we figured we would make it up to you guys with a double dose...