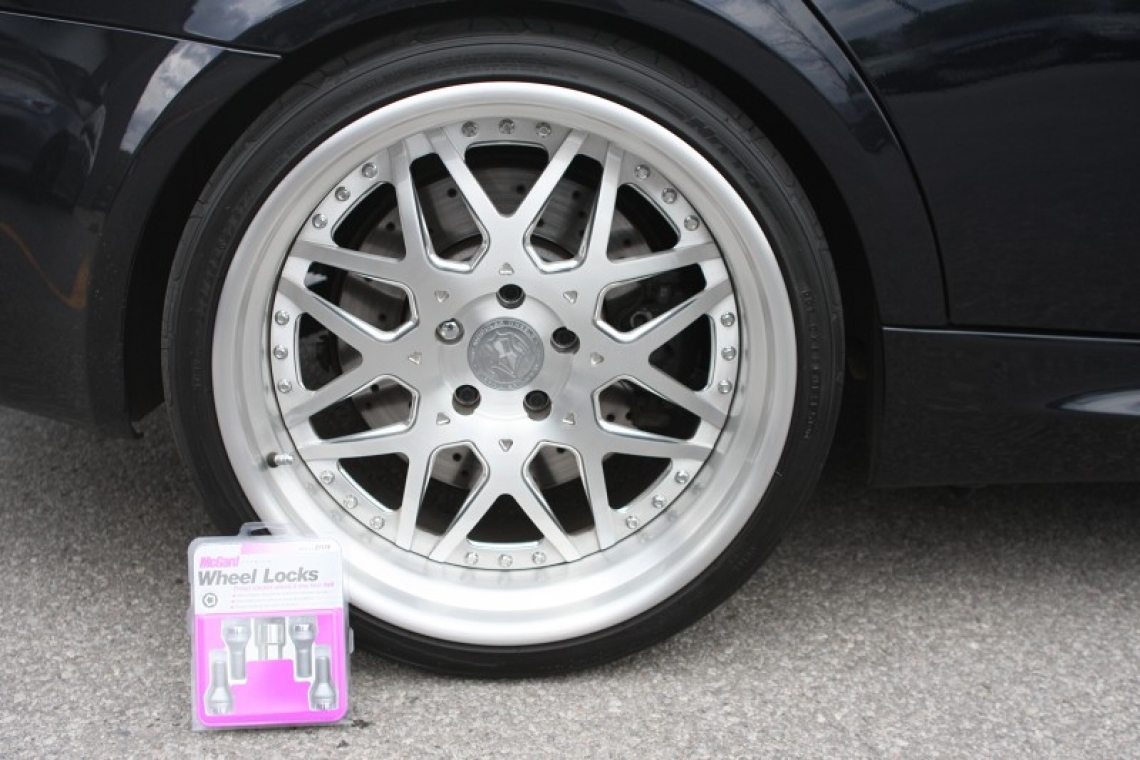 When was the last time you truly had a Super Hero on your side? Without even realizing it, you might have one, or four for that matter, right under your own nose. And if you don’t, maybe you should! McGard has been in the business of fighting crime since 1964. Okay, so maybe they’re not super heroes, but consider this, McGard wheel locks offer 24-hour protection, thwarting thieves and safeguarding the one thing that is most important to you – your ride.

Let’s face it, Tuners drop most of their money on wheels and tires, so are you going to let some chump have free reign to roll off with your wheels and leave your car up on blocks? Truth be told, two organized crooks with race jacks and cordless impact guns can disappear with your wheels in under two minutes! Many tuners rely on their alarms to draw attention to the crime and divert the thief, but then again, alarms aren’t fool proof. Not everyone has their car parked right outside; it may be down the street or in an underground parking area. Growing bystander apathy has also caused people to actually ignore car alarms. In either case, McGard has you covered.

For decades McGard has been manufacturing wheel locks for vehicles with expensive aftermarket wheels. Ever since the rise in popularity of the alloy or mag wheel in the 1970s, the wheels started disappearing. So years before an alarm was ever a consideration, McGard set out to create a theft deterrent. That deterrent came in the form of a wheel lock, which functions like a regular lug nut, but has a unique drive pattern, and requires a special key tool for installation and removal. Its design allows for an unlimited number of different computer generated lock and key patterns, and the narrow groove resists the intrusion of lock removal tools into the pattern.

Recently, we scored a set of 20-inch wheels for one of the staff cars here and wanted some extra protection. Sure this BMW M3 has an elaborate factory alarm but it is also parked over 25 stories down in level 2 of the underground. Without the aid of a 2-way pager or smartphone-linked alarm, these pricey wheels could disappear for good in no time, and no one would even know until it’s too late.

We hit up McGard for a set of their wheel locks. Their locks are made of through-hardened & tempered steel so they can NOT be broken or drilled. Thieves want to be in and out in a hurry, without a lot of hassle, which makes McGard wheel locks an excellent deterrent because it simply isn’t worth the risk to the thief at that point. In addition, the Chrome plated exterior of McGard’s Tough Nuts is guaranteed not to rust, chip or peel, in even the harshest conditions.

The installation was of course easier than changing a tire and no jack is required. Just unbolt one of the factory lugs and replace with the McGard locking nut with proper torque specifications. Now you are good to go with the confidence that they ain’t jackin’ your wheels anywhere, any time.

JL Audio C3-650 Convertible Component/Coaxial Speaker System
There are times when an installation calls for a separate woofer and tweeter and other times when a coaxial is the better approach. With the...