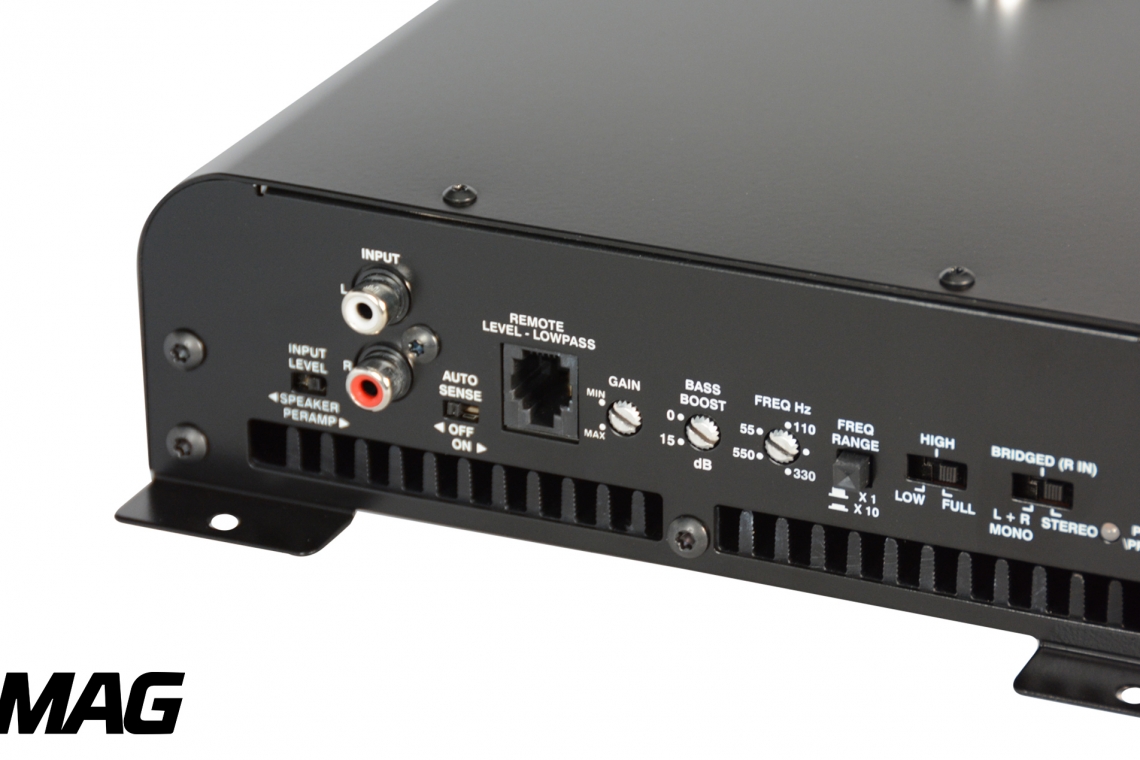 Over the last half-dozen years there has been quite a bit of advancement in full-range Class D amplification. Although performance has improved, for some people it’s still not quite there. These folks want analog amplification above all else. One of the main drawbacks of the classic analog amplifier is a lack of efficiency, which means a lot of the electrical power from your car is being wasted as heat. But there is hope for the analog aficionados out there. It’s called Class H, and the folks at Arc Audio are one of the industry leaders in all-analog, Class H improved efficiency amplification.

Without getting too much into the technical details, Class H amplifiers improve overall efficiency by allowing the output devices to operate closer to the maximum rail voltages and minimize voltage drops across the outputs, thus improving efficiency. This is accomplished by providing different “rail” voltages; the amplifier automatically switches from one to the other as the output changes with the musical signal.

What this really means to non-propellerheads is that the amp uses less current to make power, so less energy is wasted as heat. It also means that our music doesn’t go through another A/D converter, as everything happens in the analog domain.

To see for ourselves how well the topology works, Fred Lynch at Arc Audio sent us one of their larger two-channel Class H amplifiers, called the KS 600.2. 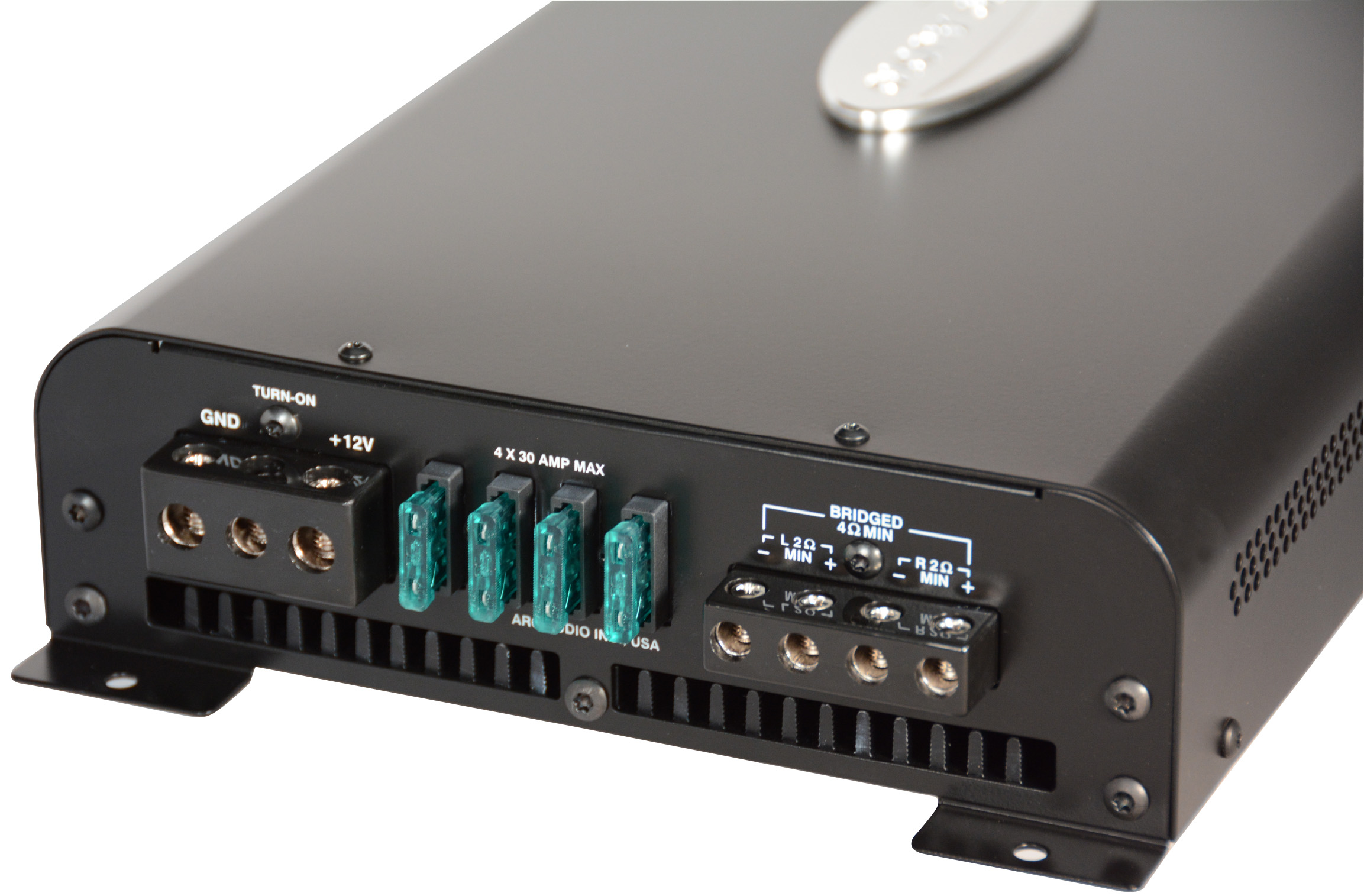 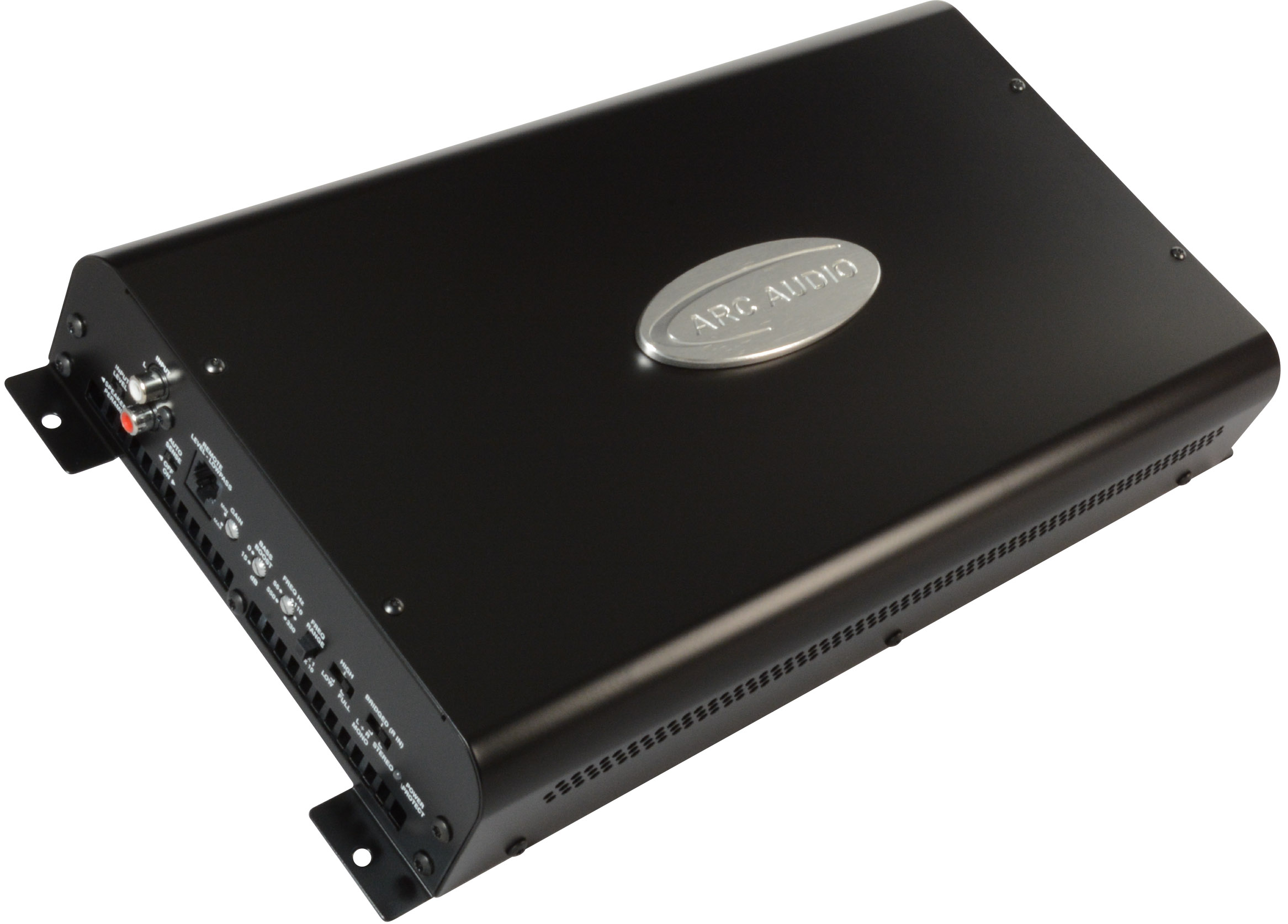 Finished in a plain satin black powder coat, the only attention the KS 600.2 will get comes from the solid brushed aluminum Arc Audio badge in the center of the heatsink. Clearly designed as an amplifier to be listened to rather than looked at, the KS 600.2 comes equipped with a very well thought out pre-amp section that includes a wide bandwidth crossover, up to 15 dB of bass boost, high and low level inputs, signal sensing turn on, and a special switch that allows stereo, right channel, or summed mono bridging. In addition, a microprocessor-controlled protection circuit makes sure the amp is protected against short circuits and over-voltage or thermal issues. It also blinks a special LED with a code that lets the user understand the condition.

If you have a car that does not provide a switched 12 V trigger to turn on an amplifier, the KS 600.2 can be configured to sense the DC offset found on the output signal of most integrated circuit amplifiers, such as those found in your OEM radio. Better still, in this mode the normal remote input terminal of the amp becomes a remote output terminal that can be used to turn on other amplifiers that are not equipped with signal sensing.

The crossover controls provide a bandwidth of adjustment from 55 Hz to 5.5 kHz, courtesy of a x10 range switch. And with this much power on tap (1,200 watts into four ohms in bridged mode) it stands to reason that many people will want to use this amp to drive subwoofers. They will be pleased to learn that Arc Audio includes a wired remote level control for just this sort of application, and it can provide remote level adjustment whenever the amp crossover is set to low-pass mode. 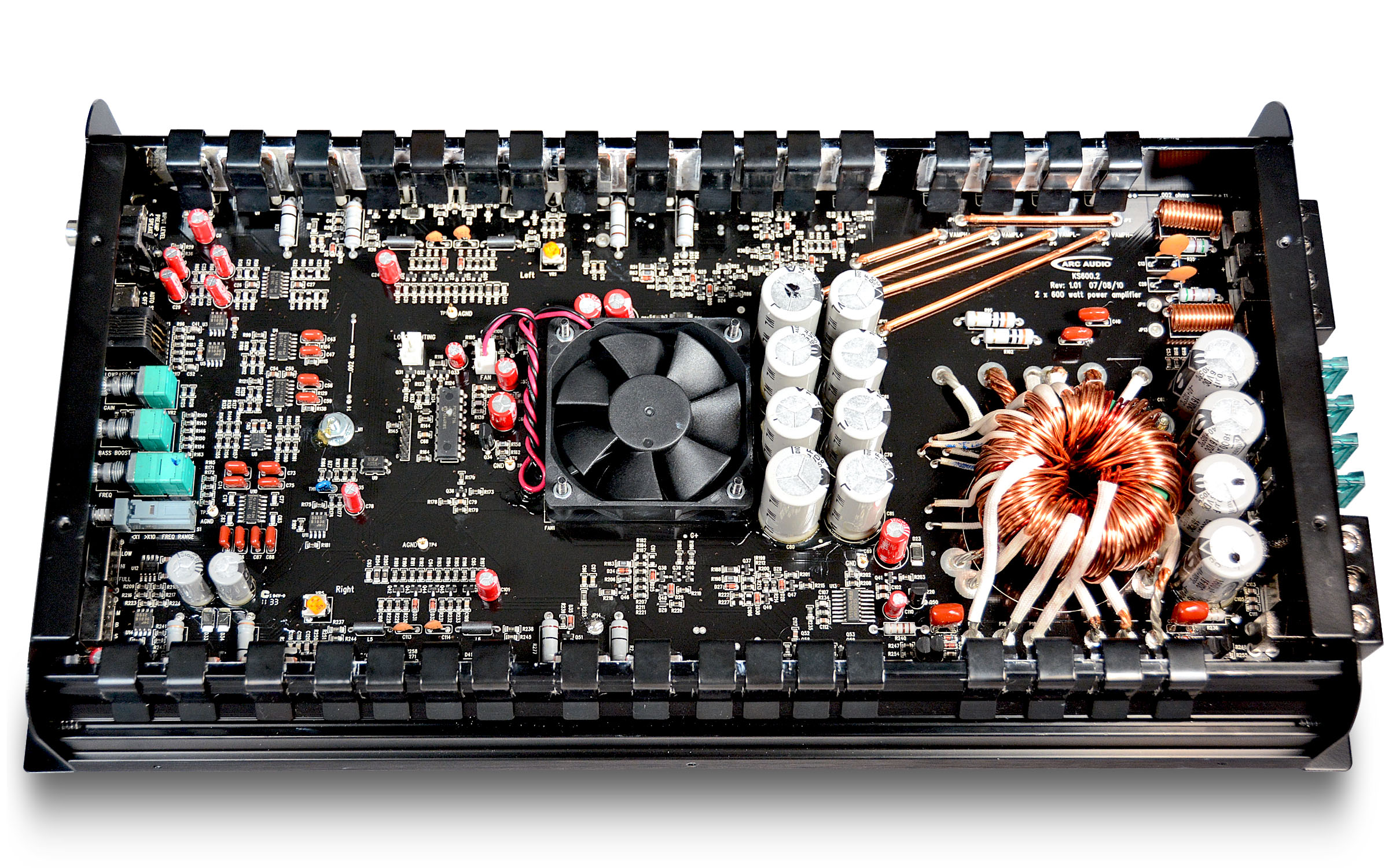 Taking a peek inside the amplifier reveals a well designed layout, with plenty of capacitance on board to feed the higher voltage rails as needed. Surface mount parts are used wherever possible, and a large fan draws cool air through the sides of the amp, forcing it out over the finned internal heatsink. 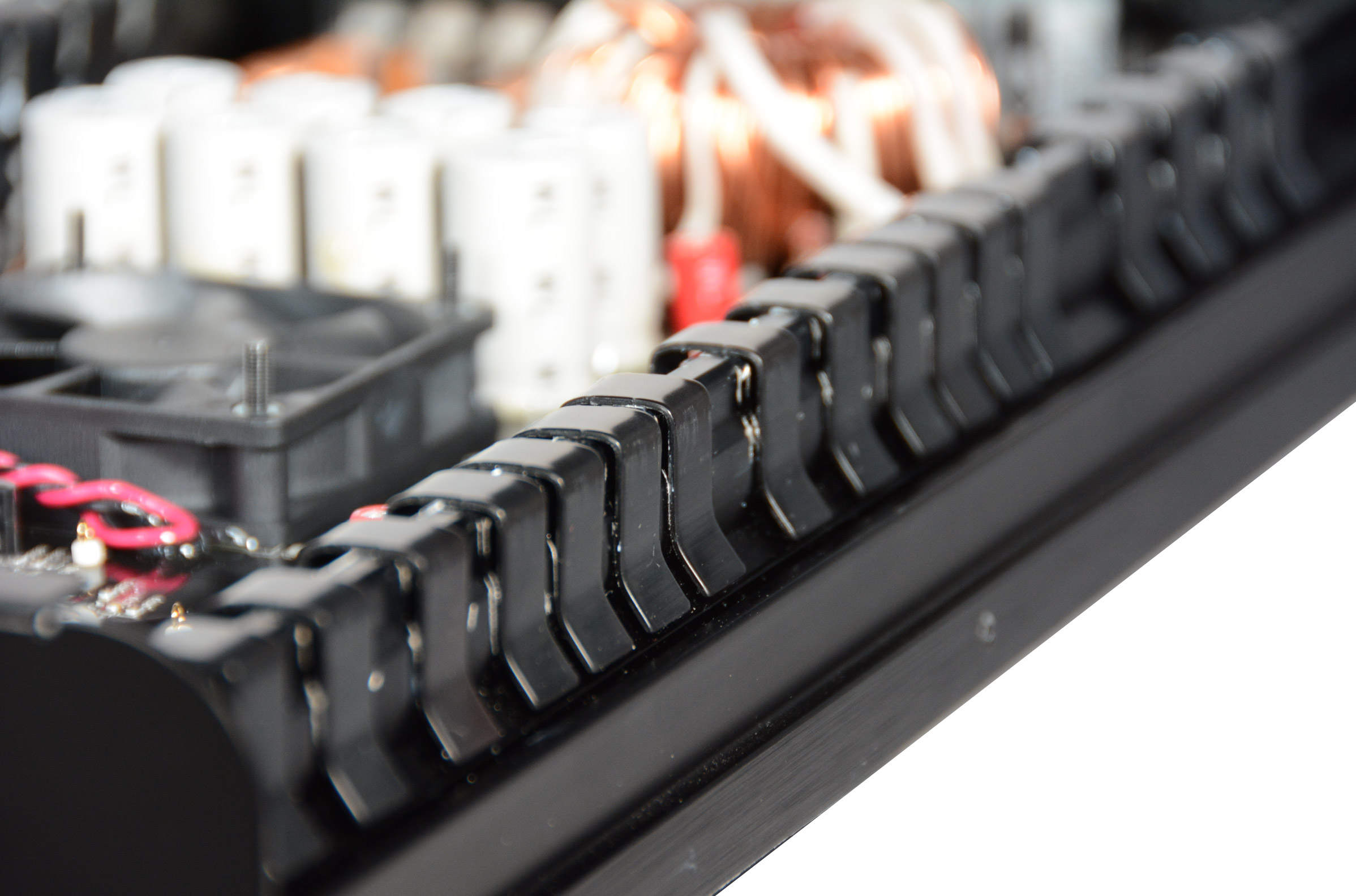 The cooling design is one of the more thoughtful approaches I’ve seen recently, and because the system is actually designed to have sufficient air draw, it works much better than other fan cooling methods I’ve seen.

I have a pretty good idea what to expect from the powerful Arc Audio amp before even hooking it up, as I have listened to similar designs several times in the past, always with good results.

After connecting the KS 600.2 into my listening room reference system, I set the crossover to all-pass, make sure the bass boost is flat, and begin my listening with a few difficult tracks that some amplifiers struggle with. Beginning with the dynamics of David Benoit’s Re Bach and the complex crescendo of choral voices combined with a full symphony orchestra on Requiem Opus 8 by the Atlanta Symphony, the KS 600.2 proves to be more than up to the task. I have to remind myself that this amp is capable of overpowering my component speakers, so a little common sense with the volume control was in order.

One of my favorite tracks for evaluating musicality is another Benoit track, Just Can’t Stop Lovin’ You. This is a soft, expertly played piano solo. I find it very revealing, particularly in the upper midrange. And when you want to rock, the KS 600.2 has plenty of power to drive your system to almost concert level volumes, assuming you have the speakers to handle it.

From a listener’s perspective, the amp delivers a natural uncolored sound, with very good stereo imaging. About my only very minor gripe is that the fan can be heard faintly in the background on very soft passages – but in a car, I doubt it would be heard at all.

I spend almost three very enjoyable hours listening to this amp, and it never once made me wish for better.

Moving to the test bench, I go through all the usual performance tests and measurements; I’m happy to report that the amp meets all of its published specifications. Signal-to-noise, stereo separation, frequency response and output impedance all measure well, and efficiency at fractional power levels is also good (Note: fractional power means a fraction of full power, typically 1/3 rated output). THD at one watt is very low at 0.08%, and the amp was flat from below 10 Hz to over 60 kHz.

The Arc Audio KS 600.2 is a product that will appeal to those who have a distinct fondness for analog audio, but also want a reasonably efficient amplifier. Designed for sound quality and superb sonic performance, this is an amplifier I’m confident would make anyone very happy for a long time. It’s built to last, sounds great and, while it’s not cheap at $699.99, is a very good example of getting what you pay for. And it’s worth every penny.