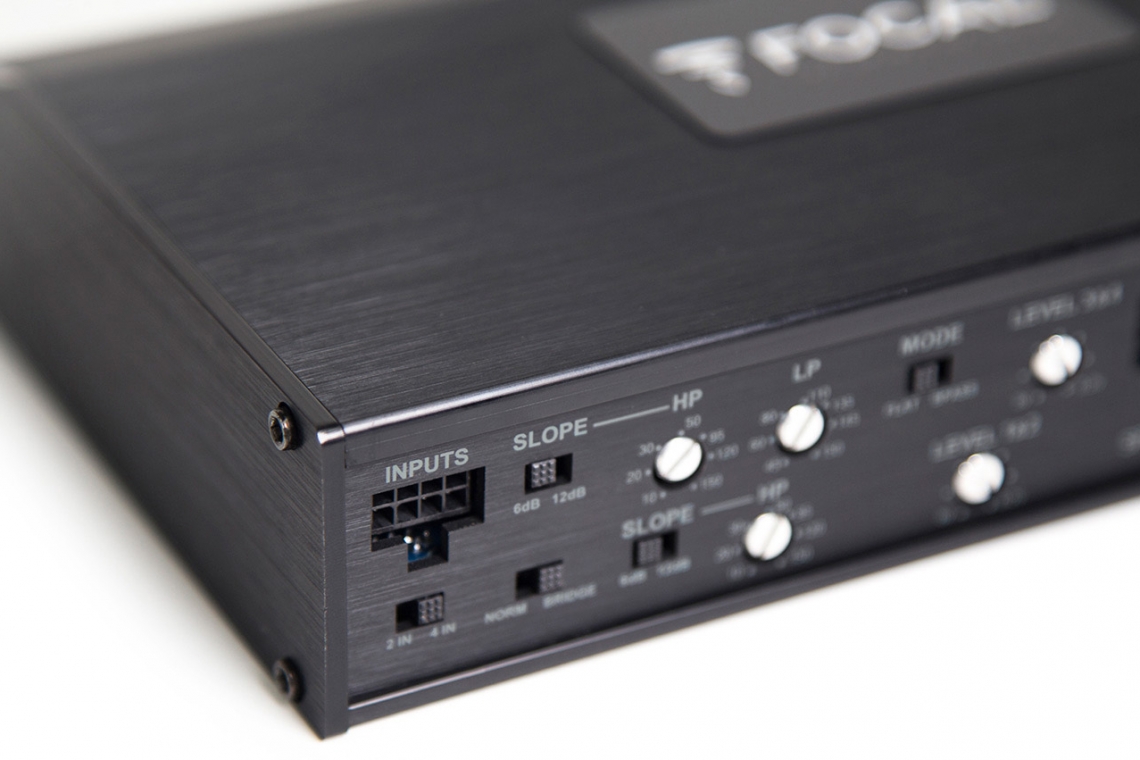 As one of the world’s premier audio companies, Focal isn’t accustomed to taking a backseat to anyone, and they hold true to form with their newest offering in the hotly contested motorcycle and powersports amplifier segment. 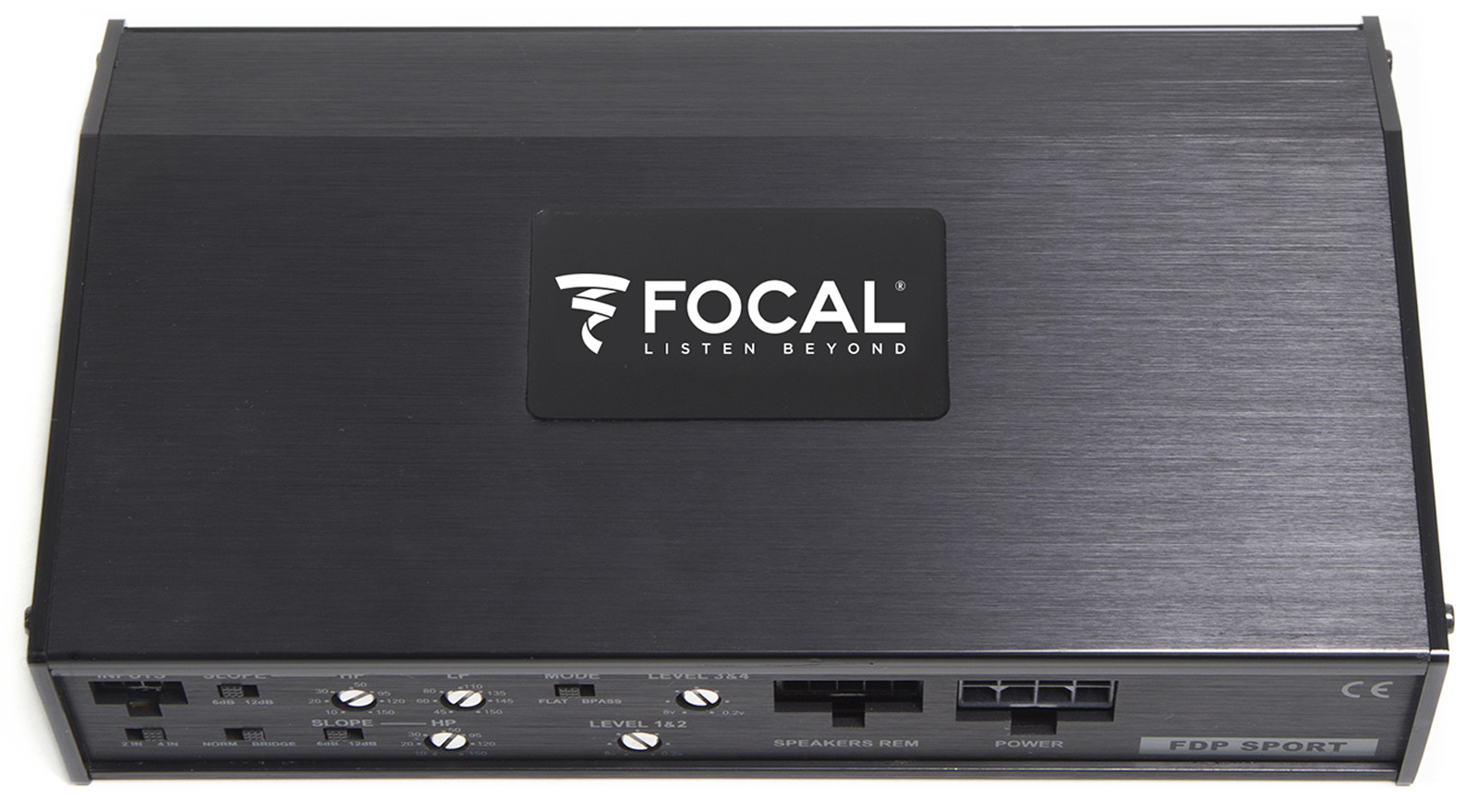 The FDP SPORT is a very compact design, considering the incredible power it is capable of. Designed in California and measuring only 1.625 x 8.25 x 5 inches, it easily mounts in the traditional “above the radio” position in a Harley touring bike. It even comes with custom Harley-style plug and play connectors to make installation a snap. Should you choose to use it on something other than a Harley-Davidson motorcycle, it also comes with regular RCA style input connectors. Power connections are made via an eight-pin high-current Molex connector that is fed by five-foot-long OFC fine-strand eight-gauge cables. 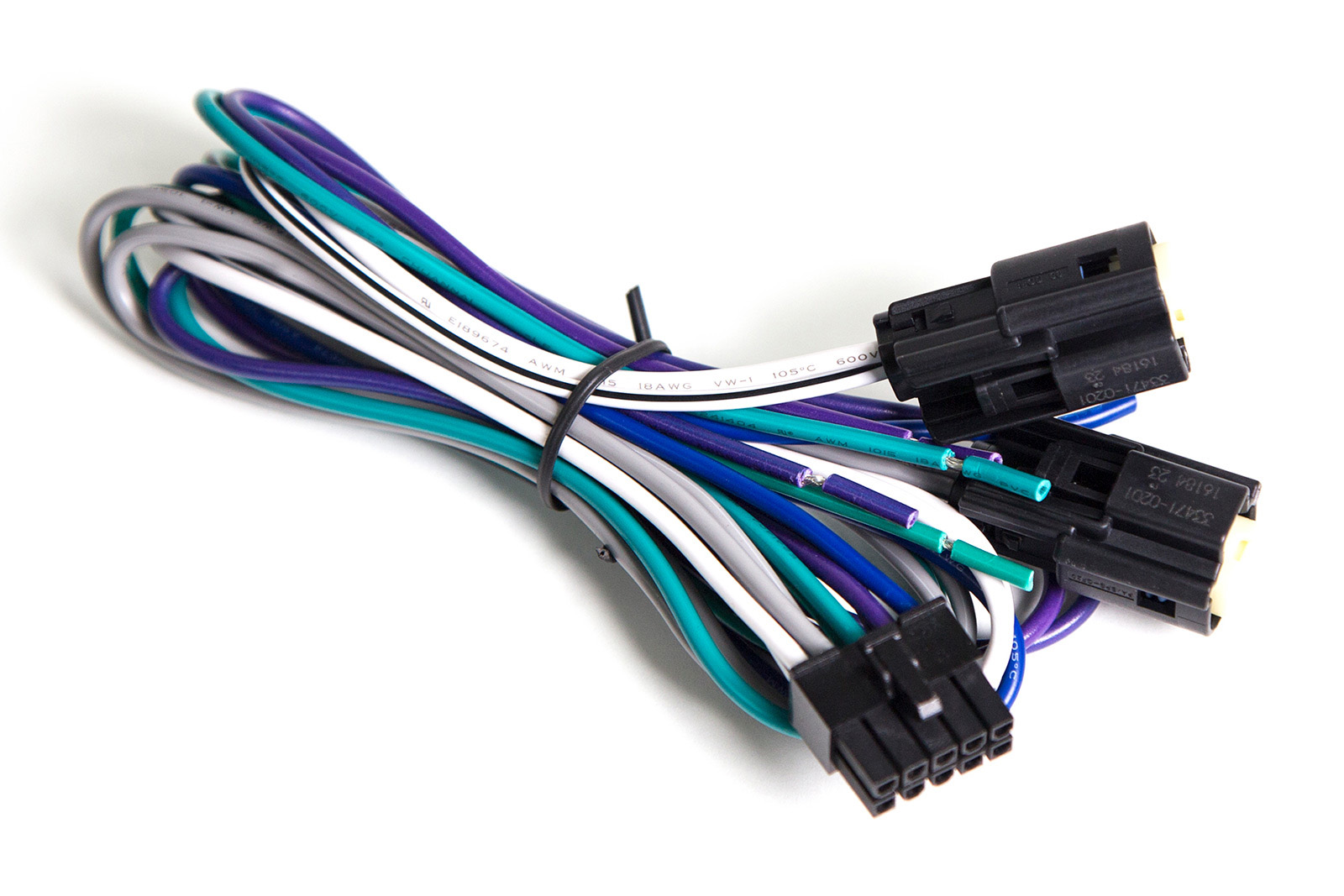 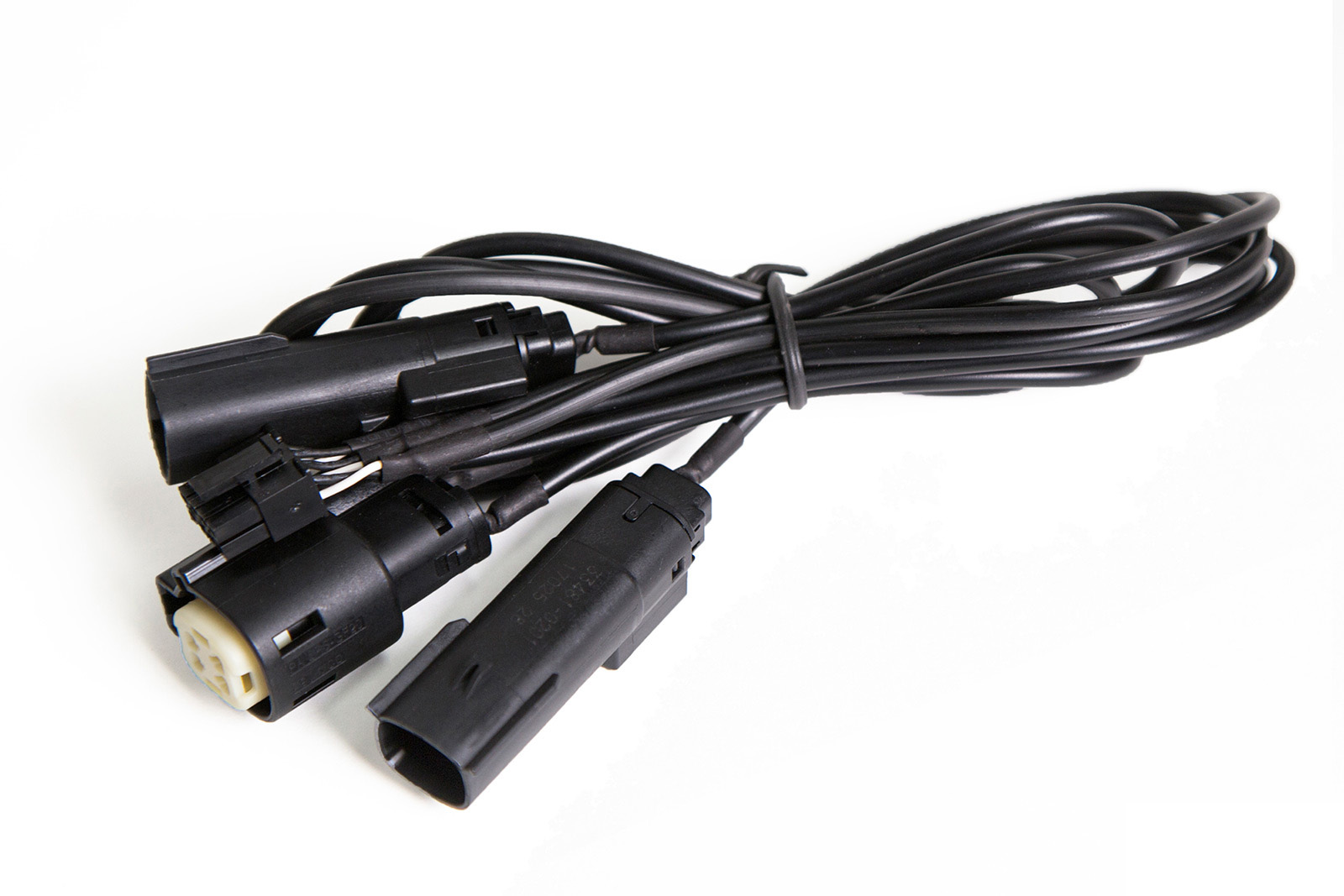 Each pair of channels has a gain control, and the front channels are equipped with an adjustable high-pass crossover that can be set to any frequency between 10 Hz and 150 Hz. The rear channels can be configured in either high-pass or low-pass modes, and all of the channels can also be set to full range. Crossover slopes can be set to either first or second order, and a bridging switch ensures a summed mono signal is available for the bridged channels. The amp can be used with either two or four channels of input simply by selecting the preferred mode with the supplied switch.

As you would suspect, an amplifier as small as this might suffer from short thermal times, but thanks to an automatic signal reduction system, the amplifier won’t shut off if it gets hot; it will simply reduce the available power until it cools down, and then resume normal operation. The result of this clever trickery is no interruption to your music!

When it came time to sit down and listen to the new Focal amp, I connected it so the front channels drove my reference speakers, and the rear channels were bridged to a four-ohm subwoofer system. The front channel crossover was left full range, and the sub was crossed over at 90 Hz. Then, with the gains adjusted and a fist full of my favorite CDs, I sat down for what I anticipated would be an enjoyable listening session. Whenever I’m evaluating anything, I make notes as I listen, so I thought I’d share a few things I jotted down while listening to the FDP SPORT:

“Excellent! Lots of power and surprising transparency.” “This is a very musical amp.” “Very quiet between passages. Not even a hint of hiss or Class D hash.”

If you get the impression the little Focal amp impressed me, you’d be right. I’m sort of known around here as the “anti-Class-D guy.” Maybe I’m crusty and old fashioned, but I just haven’t heard too many full range Class D amps that I would consider as viable replacements for a good Class AB design, but this one came close. 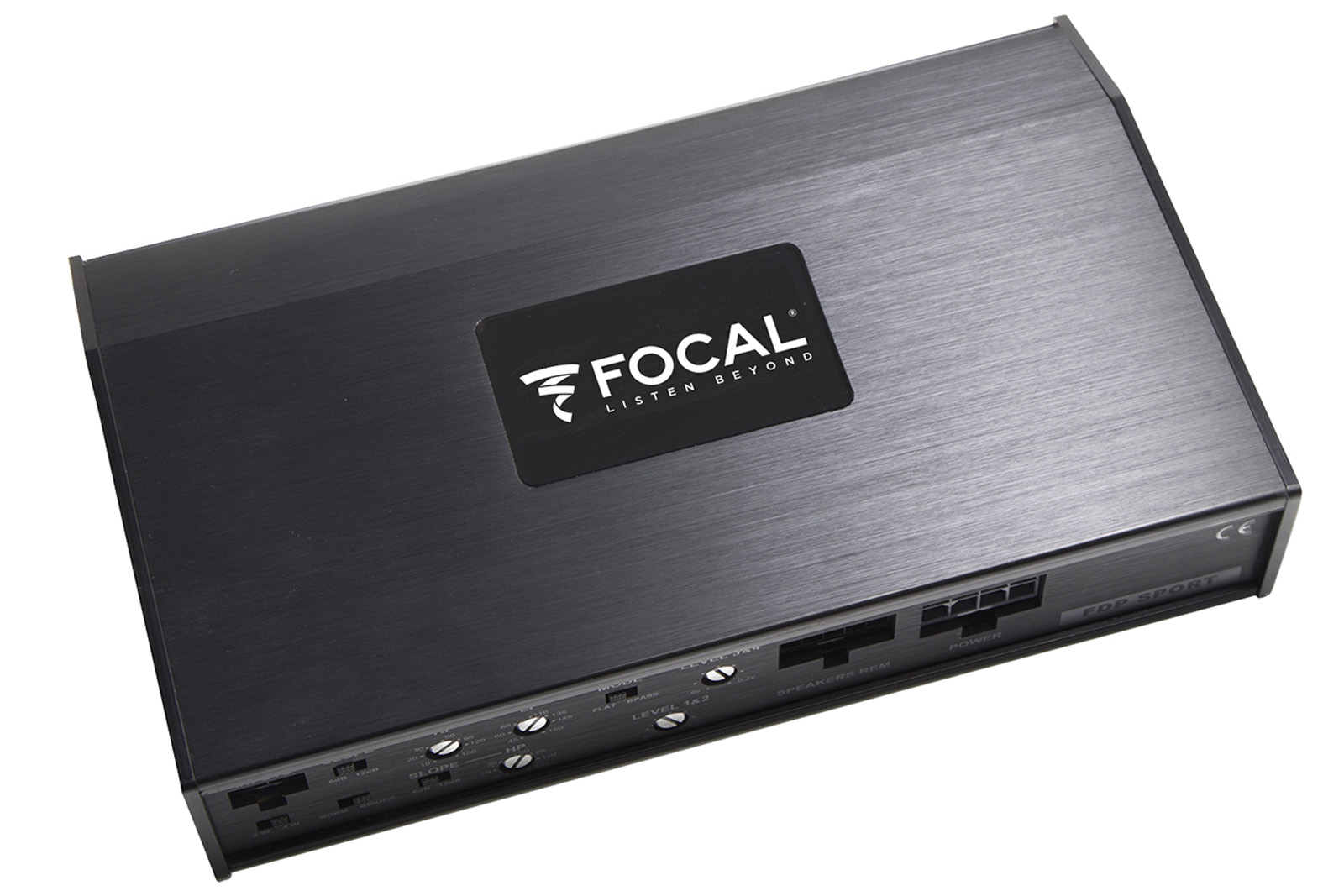 This new little amp from Focal surprised me. It sounds excellent in every way. I listened to it for at least three solid hours, and try as I might, it never showed me anything that I didn’t like. It proves it can drive a system with serious authority, and the quality of the sound is brilliant. Without signal applied, the amplifier is very quiet and has a zero-audible noise floor. Stereo separation is also excellent, and the FDP SPORT did a very good job of creating a solid stereo image with a strong “phantom center,” if occasionally lacking a bit of the sense of space and movement that I have observed in some recordings. I noticed this most when listening to large, complex orchestral performances, or when playing pure acoustic recordings done in a large, open space. To be fair, none of that matters on a motorcycle! What I’m talking about missing is the kind of detail that’s seldom even possible to hear, even in a typical car system.

Later on during my session, I cranked up the gain on the woofer and pushed the amp really hard for about 15 minutes. I noted that the heatsink did get pretty hot, but the amp showed no audible sign of stress or reduction of power. 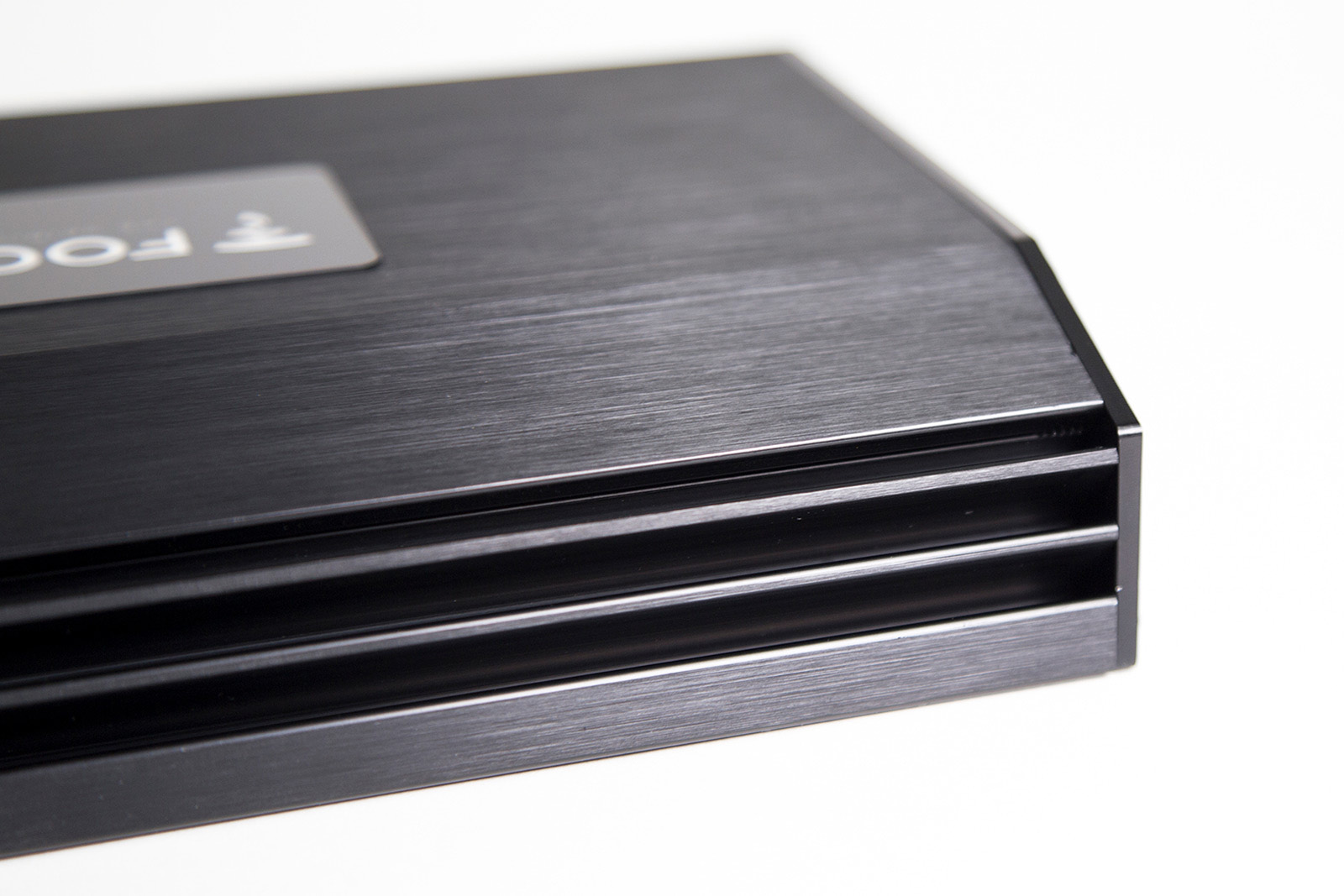 The next morning, I put the amp on my test bench and checked out the measured performance specs. As you’d expect from Focal, the amplifier easily meets or exceeds all of its published specs, and the testing simply reinforced my high praise of it from the day before. To prevent distortion, the FDP SPORT incorporates a clip limiting circuit that prevents the amplifier from being overdriven.

Having said all that, I should also add just a couple of cautionary comments for anyone installing this amp on a motorcycle. First, there are very few speakers that can handle the actual real power this amp develops. If you hooked this amp to a factory motorcycle speaker, it probably wouldn’t last two hours. This is a serious amp, and it deserves serious loudspeakers. Secondly, serious power output also means serious current demands. At full power, there are very few motorcycles (probably none) with a charging system that will keep up to the potential demand of this amp. Now, it’s unlikely that anyone would be running this thing wide open for any length of time, but just understand that the capability of sucking the bikes charging system dry is there if you’re not careful with the volume. If you like it loud, keep an eye on the voltmeter. 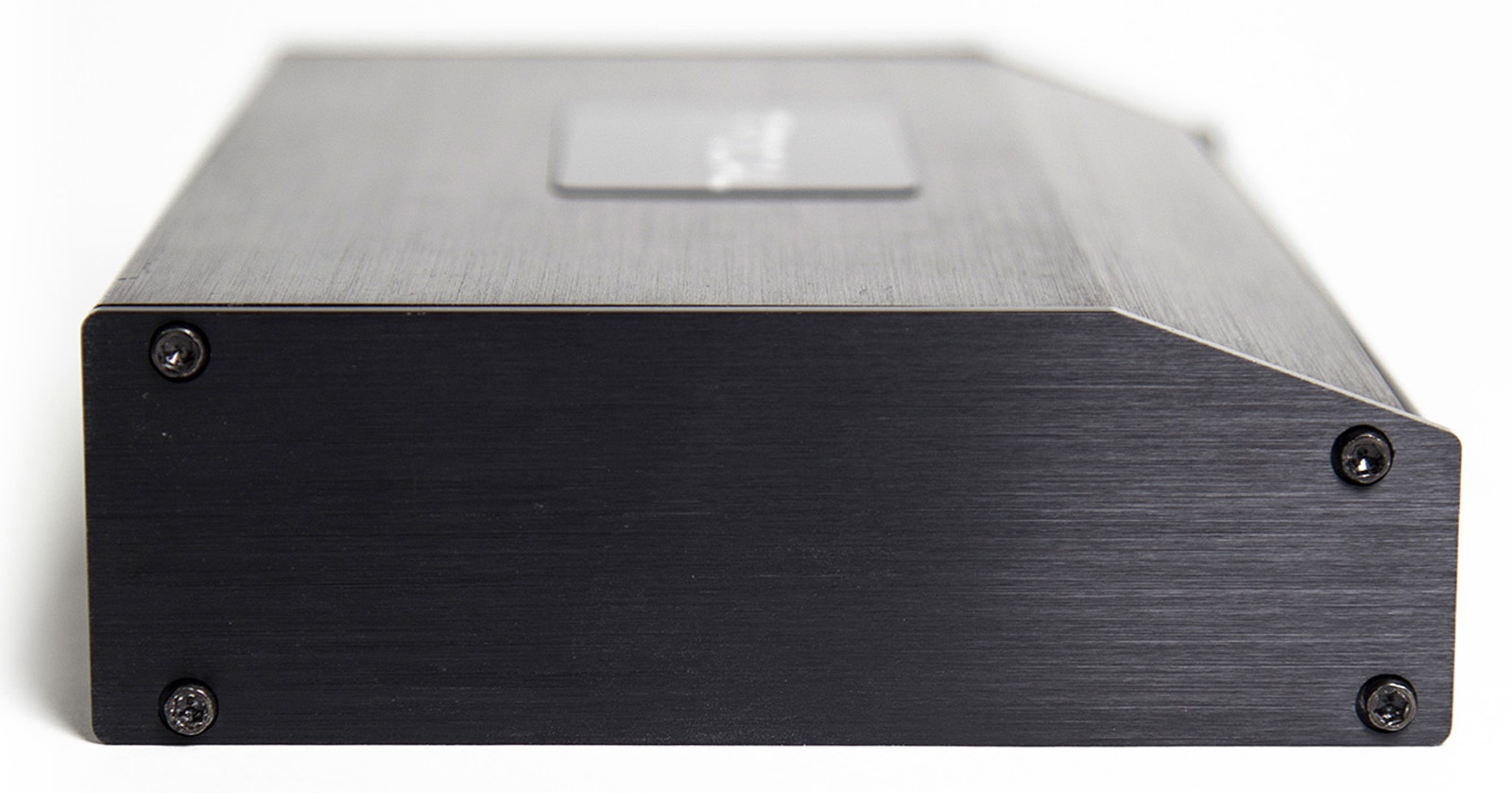 If you are looking for a serious amplifier for your motorcycle, or even your car for that matter, this Focal amplifier should be high on your list of products to audition. It sounds great, makes incredible power for the footprint, and is small enough to be installed almost anywhere. Just make sure you have the current to feed it and the speakers to handle it.