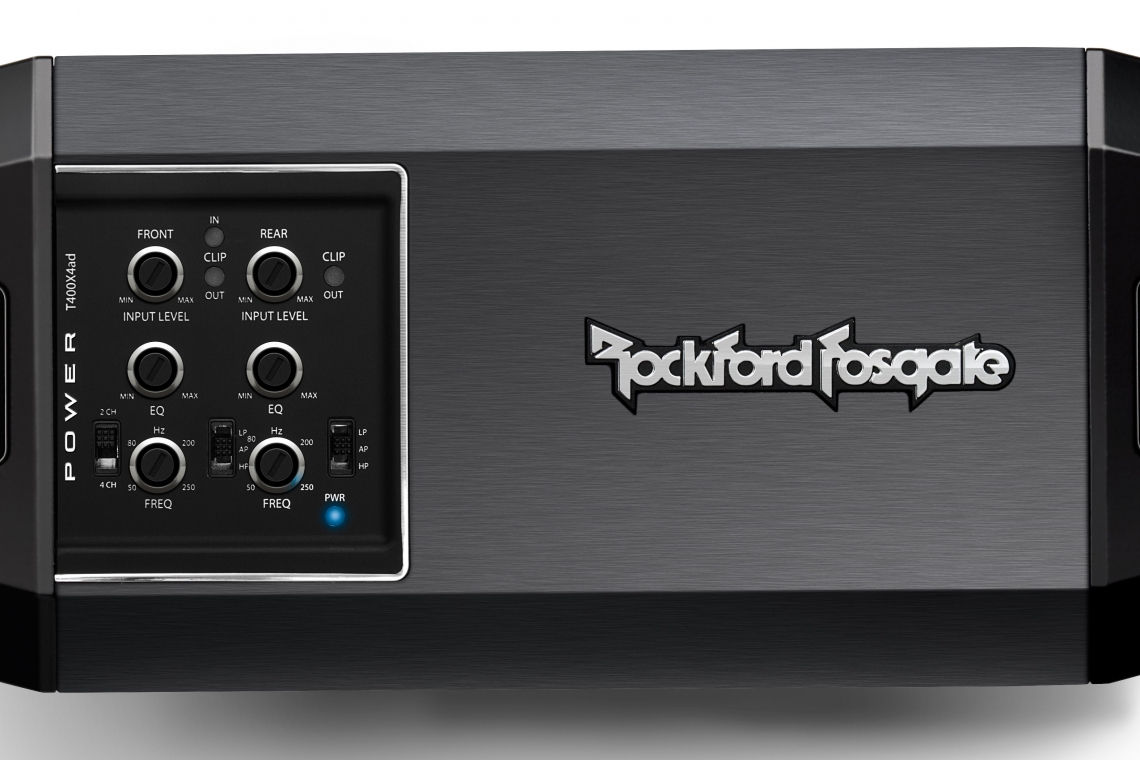 Whether you’re in your car, UTV, boat or riding your motorcycle, any audio enthusiast appreciates a powerful amplifier. As cars get smaller and we install stereos into a wider array of vehicle types, one thing remains constant: smaller amplifiers will become more prevalent moving forward.

This fact hasn’t been lost on the product development team at Rockford Fosgate. In fact, they have developed a series of “Motorsport” amplifiers – small footprint, high power units designed specifically for these more difficult installations.

In this review I'm looking at the top of the line, four channel amp in the Motorsport line, known as the Power T400X4ad. Loaded with innovations and several patented features, this extremely compact amplifier is rated at 100 watts per channel into either four or two ohm loads, and has a U.S. suggested retail price of $499.99.

The T400X4ad is chock full of Rockford Fosgate technology, including a bunch of stuff you simply can’t find on any other brand. As any experienced person will attest, system setup and tuning can make or break an entire install. To make sure the amp gain settings are dialed in correctly, one of the most important features of the T400X4ad (as well as many other Rockford Fosgate amplifiers) is its patented “C.L.E.A.N.” setup system (short for Calibrated Level Eliminates Audible Noise). The amplifier is equipped with input and output clip indicators to help aid in the setup process for a trouble-free install.

Included in the box is a special setup CD. Simply play the appropriate track in your head unit and increase the volume setting until the input clip indicator lights up on the top of the T400X4ad, then reduce the output by one step. After, simply adjust the gain controls on the amplifier until the multicolor output clip indicators turn blue. That’s it. You’re done!

If you want to tweak it a bit more to dial in some gain overlap and really perfect it, there are additional tracks on the disc and you can double check your setup by monitoring the amp output clip indicators while playing your favorite music.

Other unique features of the T400X4ad are the “Constant Power” and Class-AD topologies that work together to maximize power output into the speaker load while maintaining optimal efficiency to minimize amplifier heating. Word constraints prevent me from going into the details here, but if you’d like to know more about these technologies, there is plenty of information on Rockford Fosgate’s website. And on the subject of keeping heat under control, the T400X4ad also incorporates a special three-stage airflow system with dual fans to keep things cool.

Of course, all the typical features are included as well, with adjustable frequency all-pass, high-pass and low-pass crossovers for both front and rear channels, and Punch equalization, which unlike a typical bass EQ, provides boost at both the lower and upper sections of the response curve.

LISTENING
After connecting the front channels of the T400X4ad to my reference component speakers and the rear channels bridged to a 12-inch four ohm woofer, I sit down and begin a serious, but thoroughly enjoyable evaluation of the Rockford’s sonic credentials.

As usual, my musical selections run the gamut of classical and jazz standards on audiophile labels, to well-recorded pop, rock, country and even some hip hop. Over the course of three hours, no matter what I play, the T400X4ad sounds natural, transparent and remarkably good. The amp performs with sonic excellence, reproducing natural-sounding music with good detail, and the stereo image is equally impressive. I’ve been driving the amp fairly hard for quite a while, and I note that it’s quite warm. But it stands to reason that an amp with that much power in such a small heat sink is going to get good and warm – even with forced air fan cooling. Based on what I experience, I suggest giving this amp plenty of room to breathe and dissipate heat if you really plan on  putting it to work. It’s simply a good practice to follow with any amplifier.

ON THE BENCH
On the test bench, the T400X4ad amplifier easily surpasses all of its published specifications – and most by a considerable amount. Power is almost 50% greater than advertised, and other typical specifications are equally impressive. I notice some heat buildup during bench testing as well, so giving the amp plenty of breathing room is a good idea when planning your installation.

CONCLUSION
The T400X4ad is one of the most power-dense amplifiers I have tested to date. The amount it delivers is fantastic, but if you are going to drive it hard on a regular basis, just give it a fighting chance to rid itself of heat. It sounds great, and the special Punch EQ circuitry provides a better balance of sound when you have real world road and wind noise to overcome. It’s very well built and like other Rockford Fosgate products, should be an exceptionally reliable performer.