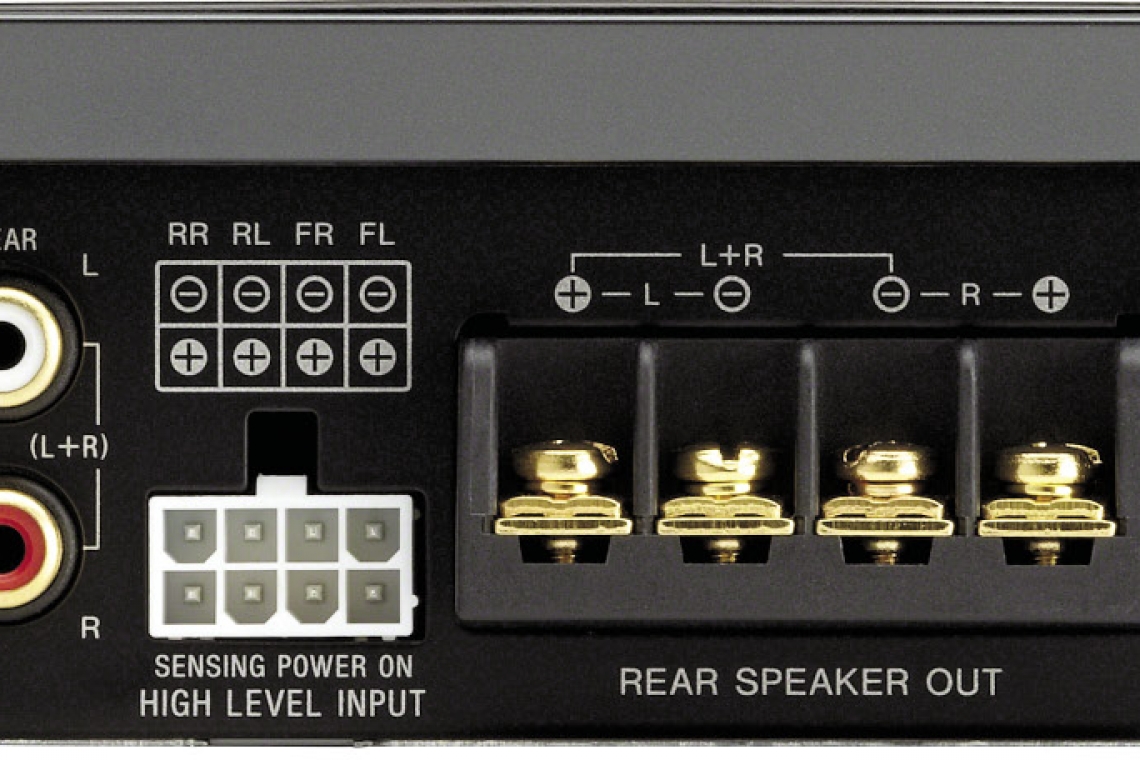 From the good folks at Sony, the new GS series of amplifiers' claim to fame is its small footprint, high-quality sound reproduction, full set of features and its control and tuning capabilities. In this review, I'm taking a close look at the XM-GS400, which is a four-channel amplifier rated at 70 watts per channel into four ohms. Suggested retail price is $349.95.

Sony's XM-GS400 uses a traditional class AB topology, foregoing the recent full range class D trend for a tried-and-true topology that offers superior noise performance and a much wider frequency bandwidth than a typical class D product. The XM-GS400 is bridgeable as well, so it can be configured for two-, three- or four-channel operation. In bridged mode, rated output power into four ohms is 160 watts per two channels.

Measuring approximately 10.75 x 8 x 2 inches, the amplifier is certainly compact. To keep the amp running cool with such a diminutive heatsink, Sony has incorporated a 2.5-inch cooling fan into the top surface of the amplifier to exhaust the hot air. The amp is finished in a cosmetically-appealing satin black and features a removable top cover that, when in place, conceals the top-mounted controls. The cover is trimmed in black brushed aluminum with a diamond-cut Sony logo. The effect is classy and refined, which is something I haven't been able to say about Sony car amps for a while.

Two Phillips screws hold the cover in place to hide the wiring connections, all of which located along the front edge of the amp. Terminals for power, ground and speakers are typical barrier strip-type connections, albeit these are gold-plated to resist corrosion. The connections are robust enough to accept eight-gauge power and ground wires and 10-gauge speaker wire, which is more than plenty if you're using all copper cables.

Input signals can be connected to four channels of RCA jacks and/or a high-level input connection that can also provide a method of turning the amplifier on in vehicles without a traditional trigger lead. You can see the amp is powered on thanks to a bright blue LED lit panel under the edge of the top cover. Should the amplifier ever go into one of its several protection modes, the panel will turn red to let you know if something is amiss.

The top of the amplifier features mirrored pairs of controls for the front and rear channels. Each pair of channels has its own gain, crossover frequency pot (50-300 Hz), HP/AP/LP switch, subsonic filter that can be adjusted from 6-70 Hz as well as a bass boost control with a range of zero to +10 dB of boost at 40 Hz.

Inside the amplifier, I find a basic but proven design, mounted on a single-sided PCB with a combination of through-hole and surface-mount parts. The pulse width-modulated power supply uses Mosfet switchers while the output section employs high-speed bipolar devices. Signal is routed to and from the top mounted controls via several multi-wire connectors that plug onto the top controls daughter board.

My listening sessions are always my favorite part of these product evaluations. Upon connecting the Sony amp to my lab's auditioning system and after adjusting the gain to match my preamp's output levels, I leave the amps front channels in all-pass mode. And, because the rear channels are going to be driving a single subwoofer, I set the crossover to low-pass mode at about 80 Hz and settle in for some listening.

For all of my critical listening sessions of four-channel car audio amplifiers, I use a pair of very high-end 6.5-inch component speakers in custom cabinets and a four-ohm subwoofer system bridged on the rear channels. In this three-channel configuration, the XM-GS400 sounds very transparent and presents no apparent sonic signatures of its own.

I listen to a few favorite tracks like Spies Complex and detailed “A Day in Tunisia” and, for fun, The Cincinnati Pops' “Ride of the Valkyries,” which are reproduced with good realism as long as I maintained a modicum of control on the volume knob. I enjoy these old Telarc recordings because of the amazing amount of openness and energy they have and I'm quite taken with the level of detail and sense of space the XM-GS400 manages. The stereo image is very good and, as I mentioned, the sense of space I heard made things almost three dimensional. All in all, the little Sony amp sounds quite good and, frankly, quite a bit better than I'd expected it to.

The next morning I move the amp to the test bench to see what sort of performance specs I can get out of it. Not surprisingly, it performs pretty well on the bench, developing significantly more power than it's rated for and boasting an ultra-wide frequency bandwidth all the way up to 176 kHz! I also measure very good signal-to-noise and crosstalk performance; though it does leave a little to be desired when it comes to output impedance and common mode rejection ratio performance. Good installation techniques (avoiding potential ground loops and radiated noise issues, for example) will be important in keeping unwanted noises out of the system.

Overall, the Sony XM-GS400 is a fairly surprising amplifier. I did not expect the level of performance this amp delivers nor would have I guessed it would sound as good as it does. With its full complement of tuning adjustments, the flexibility of two-, three- and four-channel operation, admirable sound quality, a chassis that will fit almost anywhere, there isn't much left to want for. Couple all that with an affordable price and a full three-year warranty.