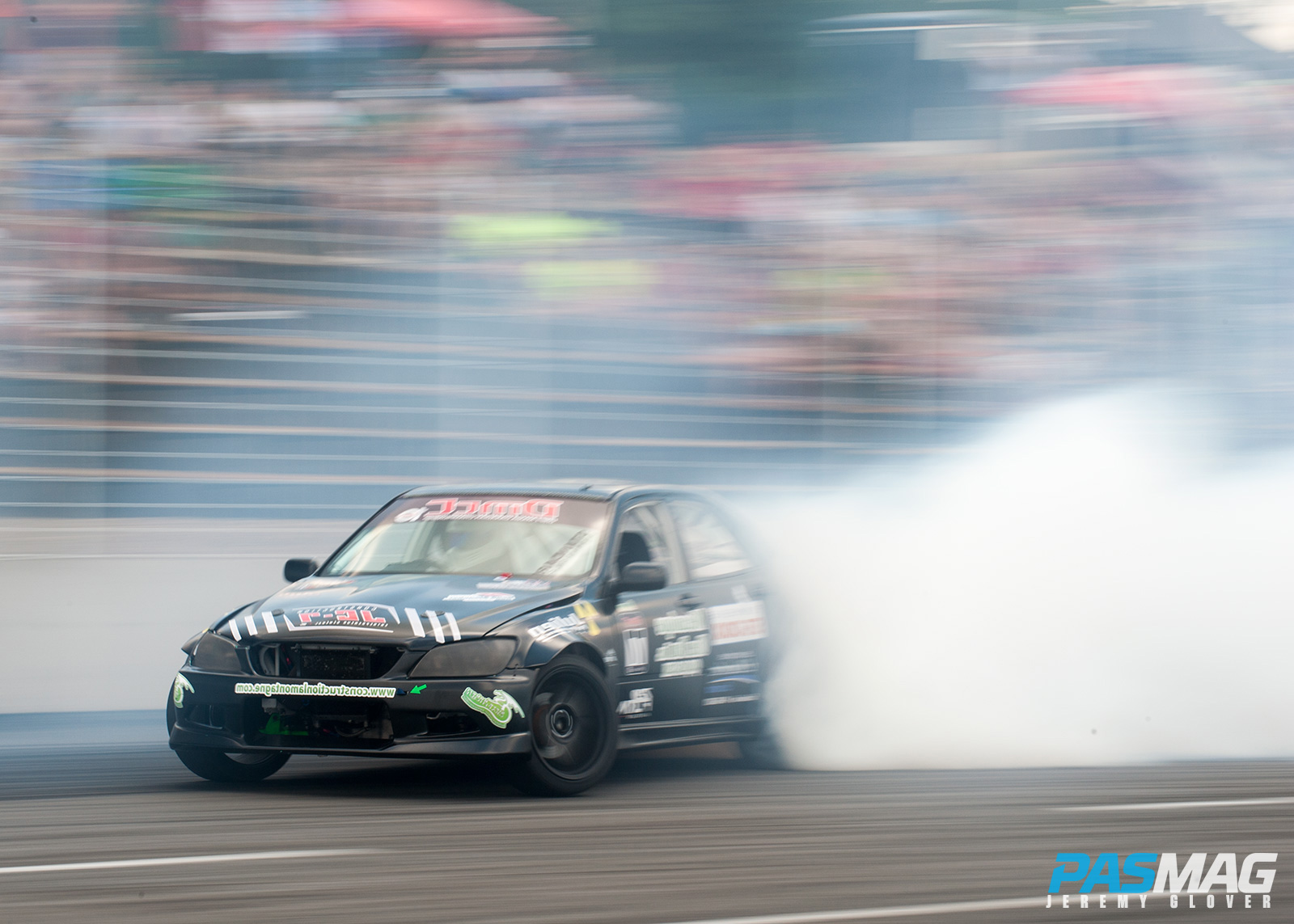 It was another sunny race day on Saturday, July 26, 2014 for the 4th round of the 2014 DMCC series! A record number amount of people came out to the Riverside Speedway located in Ste-Croix, Quebec. This is the 2nd time in DMCC has had an event at this track this year and usually the judges change the track layout to make things different. Round 1 was a rainy mess, so they decided to stick with the traditional layout to keep things simple.

Practice was business as usual with the drivers putting down some solid runs and even some great door-to-door tandems. Practice came to a halt when Maxime Cyrenne suffered the worst accident we have seen all season! Coming through the last turn and taking the high line, Maxime's car dipped off-track into the dirt, gripped and caused his car to slingshot into the other direction right into the k-wall! The impact was hard enough to not only destroy his car but also knock over the k-barrier. Luckily, no one around was hurt. Maxime was taken away by ambulance and, thankfully, only suffered some minor injuries considering the force of the crash.

Once the track was cleaned, the rest of the field had a bit more practice time before getting into qualifications. Putting down a killer run and getting the first qualifying spot, Alex Michaud edged out Jonathan Guitard, and the 3rd qualifying place went to Jeff Laflamme. Pat Cyr was almost not able to qualify when he blew an axle on his first pass. His team went into overdrive and was able to get it swapped out before the second round of qualification passes began. Pat ended up qualifying in 13th spot. Another driver that had issues in qualifying was Seb Grandmaison. He went off-track and stuffed his car into the tire wall on the other side of the first bank. He was ok but his car was in bad of shape. He and his car couldn't continue.

Now, onto the Top 16 battles - where the real action starts! In his chase run VS Francis Tasse, Max Lemoine, (possibly) blinded by the amount of smoke that Francis put out, went wide going into the infield and hit a tire wall square in his passenger side door. The impact sent his car spinning into the air! As if the hit was not enough, the impact of the car landing blew the rear differential. This ended Max's day, and hopefully the damages weren't severe to end his season.

Into the Final 4, we had Jonathan Guitard, Jeff Laflamme, Pat Cyr and Alex Michaud. Jeff got the win against Jonathan in a great door-to-door battle. Pat put down a great chase run against Alex but, as luck would have it, his transmission failed. As a result, Pat gave the win to Alex. It also gave an automatic 3rd place win to Jonathan Guitard. The Final battle of the event pitted Jeff Laflammed against Alex Michaud. Jeff put down a solid chase on Alex. In an odd turn of events, it started to pour rain. It down-poured for a good 5 minutes and had everybody scrambling. With the rain coming to a stop, the last run of the night set off but with the now wet surface, Alex Michaud was not able to get as good of a chase as he would of wanted. This gave the win to Jeff.

With only two rounds left, the points race is really starting to heat up! Next round will be taking place at the Autodrome Montmagny on August 16th.