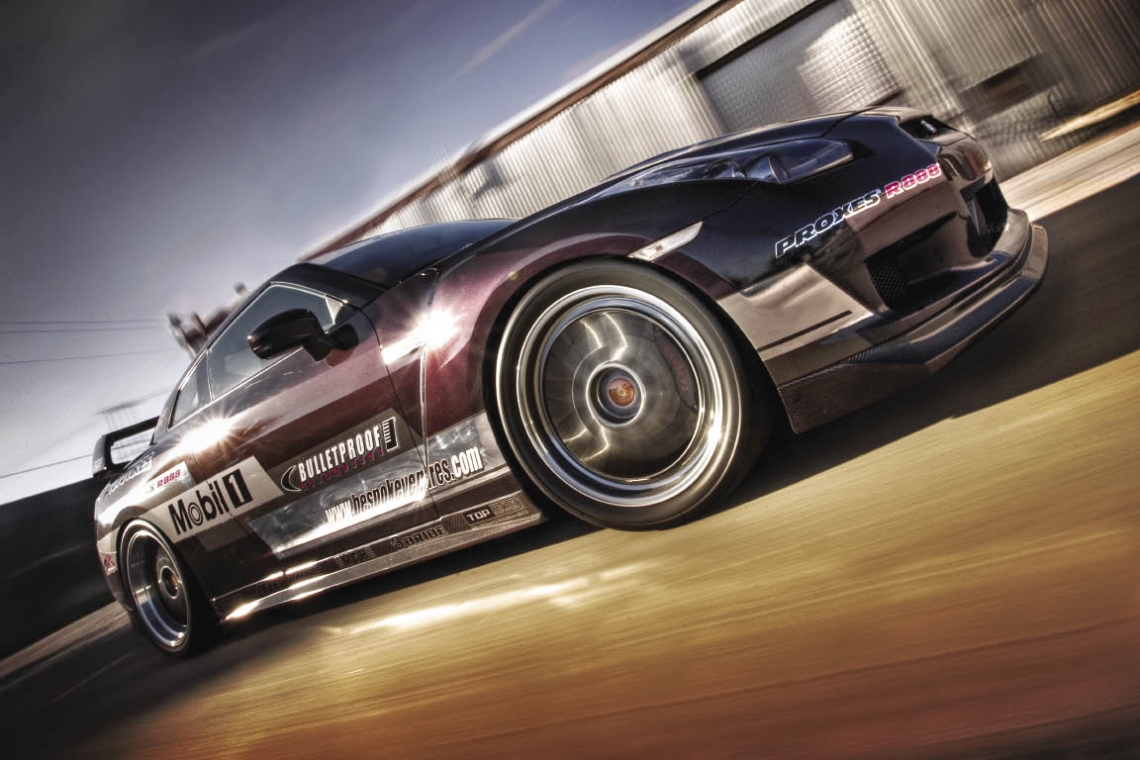 In today’s information age, everybody seems connected to the latest useful and useless news and trends on the net. Its weird when someone of a totally different era knows a lot about a youthful subject or hobby. I lost it when I found out Republican Presidential candidate John McCain’s wife, Cindy is totally down with drifting! She has taken lessons with D1 drivers and even has her own Nissan Silvia. When it comes to the new Nissan GT-R it seems like everyone has some bit of information about the new supercar fighter. Hell, even my mom was kicking it about the specs and asking me if I’m trading in my R32 GT-R to get one. The GT-R has crossed the lines of the pure enthusiast and gone far more mainstream.

The wide appeal of the car was definitely on the radar of Bulletproof Automotive who specialize in exotic Japanese aftermarket gear. The R35 GT-R is Japan’s definitive supercar, leading the way for the engineering capabilities of the entire country. Owner of Bulletproof Automotive, Ben Schaffer has built many high-end rockets but this one would prove to be far different. The car was new and they took delivery only weeks before the big SEMA show where it would debut. The parts were ordered well in advance of even receiving the car, so that when it landed, they could start surgery right away. 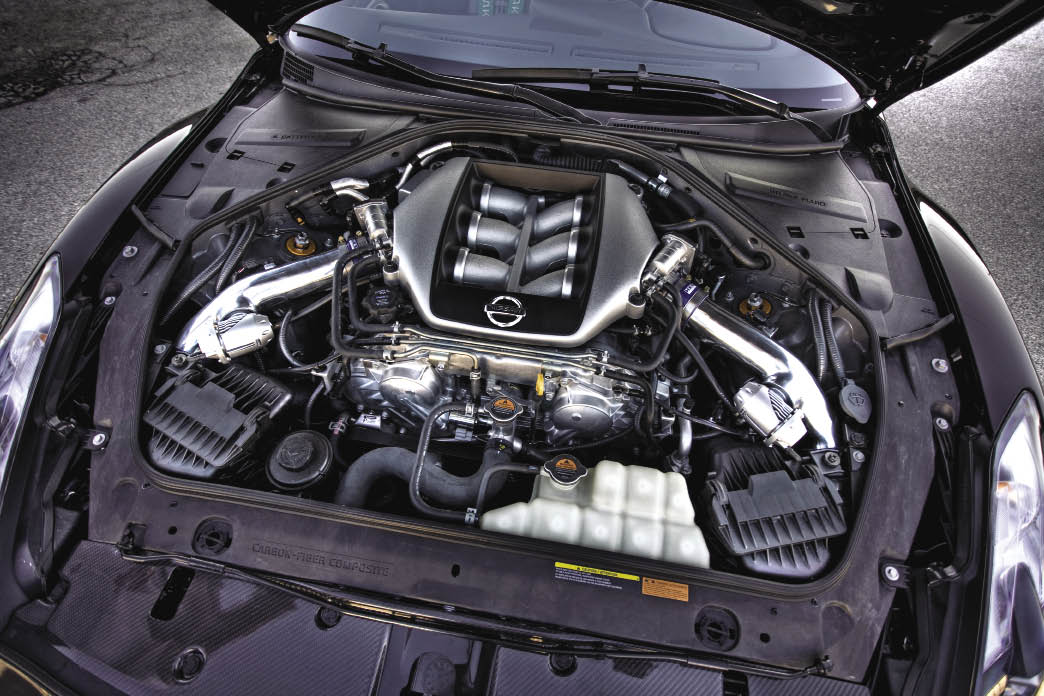 Under the lightweight lid, the VR doesn’t need much to propel the 3800-pound car with ease. The plastic piping sections were replaced with Top Secret’s hard pipe kit to allow more boost to flow through its veins. Amuse goodies were source from Japan starting with free flowing stainless steel turbo outlets pipes. The gases head out to to an Amuse R1 Titan exhaust which is extremely lightweight considering it is full titanium. A set of Amuse R1 catalysers were added to maintain CARB but keep the power levels up. After all of the hard parts were bolted up, the car was tuned with a COBB Tuning AccessPORT ECU. The bump in power is easily handled by Borg Warners stout 7-speed transaxle that makes the car so invincible. 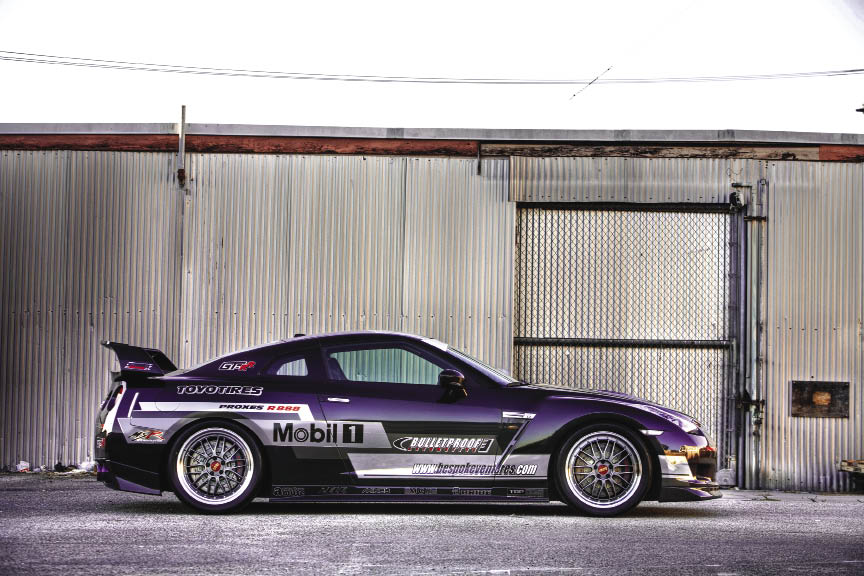 The outside of the car was ramped up pre-SEMA too since regardless of what mechanical state the car is in, it needs to look solid. The Bulletproof team stepped it up a level by painting the car and OEM Nissan color but not intended for the R35. Borrowed from the R34, the car underwent a complete color change to Midnight Purple II paint. A color that has a level of luxury and prestige and we suspect Nissan might release this color later on for the SpecV (yes, sadly it is not called VSpec), so the Bulletproof guys beat them to it. The custom paint was complimented by several body modifications including a Zele carbon fiber front bumper with matching lip. The sideskirts and rear under spoiler are also carbon fiber from Zele. The hood ducts, fender ducts and and front grill are also made from carbon fiber. And Amuse dry carbon wing has been added for increased downforce and the project was clad in MS-R original graphics. The real story here is the roof panel that has been replaced with a GT-RR one-off piece, there is nothing else like it in the world. 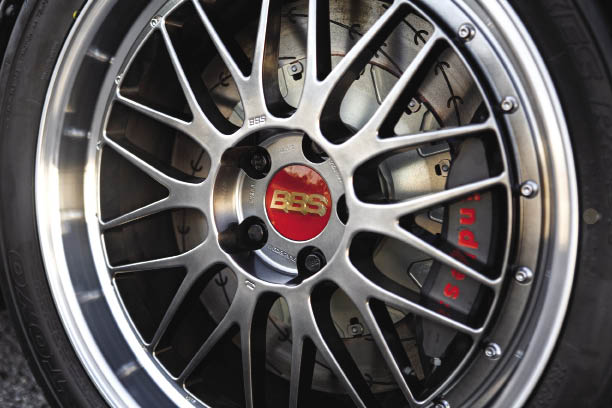 Rolling on 20-inch stock wheels, the GT-R can’t accommodate much more although we have seen some 22s fitted in Japan. With the ride height slightly reduced using an Amuse coilover system, the fitment was carefull consideration when ordering the new wheels. Offered in Japan only, the BBS LM-DBK 20x10s are found underneath the car wrapped in Toyo R888s. Lurking behind the R-compounds are a set of Endless brakes for extreme stopping power. Equipped with mindbending 15-inch Brembos out fo the box, the new Endless set up is a Mono-6 on all four corners with E-slot rotors to expel heat.

Inside the car has stuck to the form follows function route. Much of it has been left intact but the load has been lightend and safety fact ramped up. The factory seats have been expelled in order to make room for Bride GIAS carbon/Kevlar reclining seats. The factory belts and retractors have been tossed in favor of Takata 4-point greens.

Shaffer set out to design the next SpecV before Nissan got around to it. The Bulletproof GT-R was designed to have a modest bump in power, more aggressive tuning with clean and stylish visual upgrades. A car that can be used everyday but will tear it up on any track. With the SpecV arriving in Nissan dealers within the next few years, the debate will be whether to buy the factory hotrod or do as Shaffer has done here and go buck-wild to create it himself. With all of the buzz at SEMA and magazines fighting over cover rights, it is safe to say that Sahffer did something right. Although in the seven years we have known our boy “Shaffs,” he rarely does anything wrong. 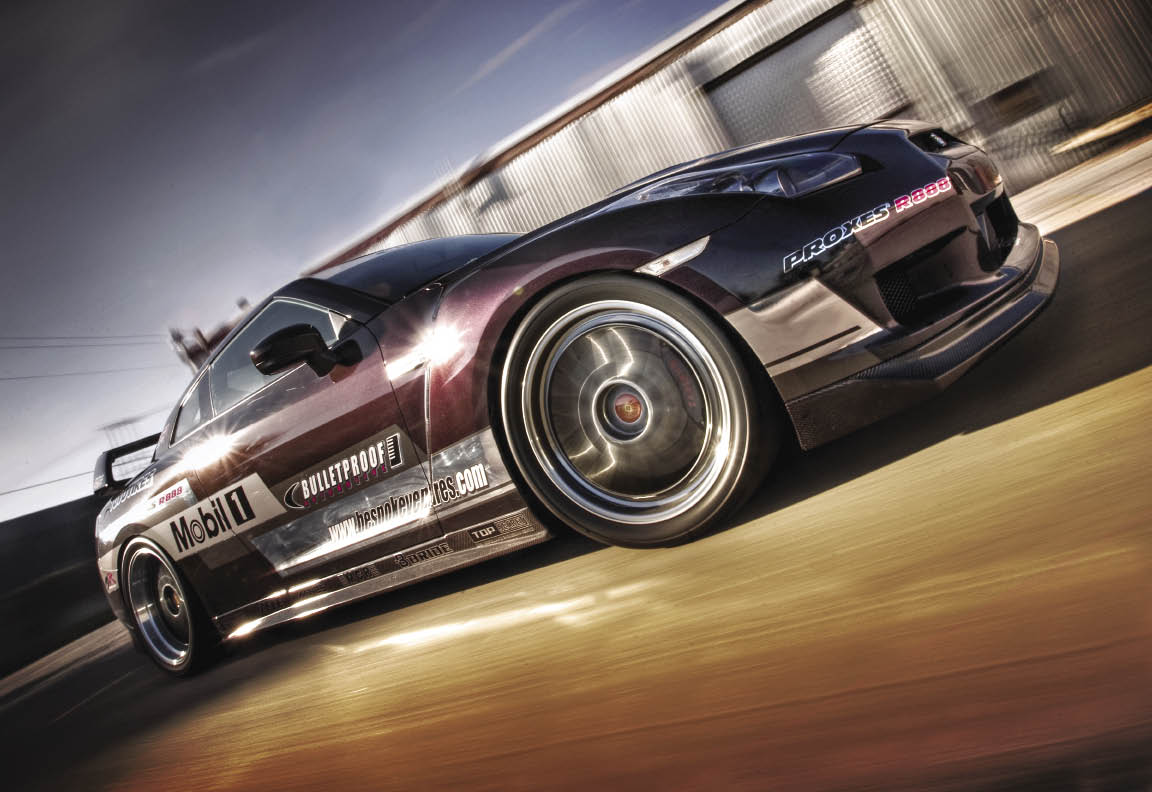 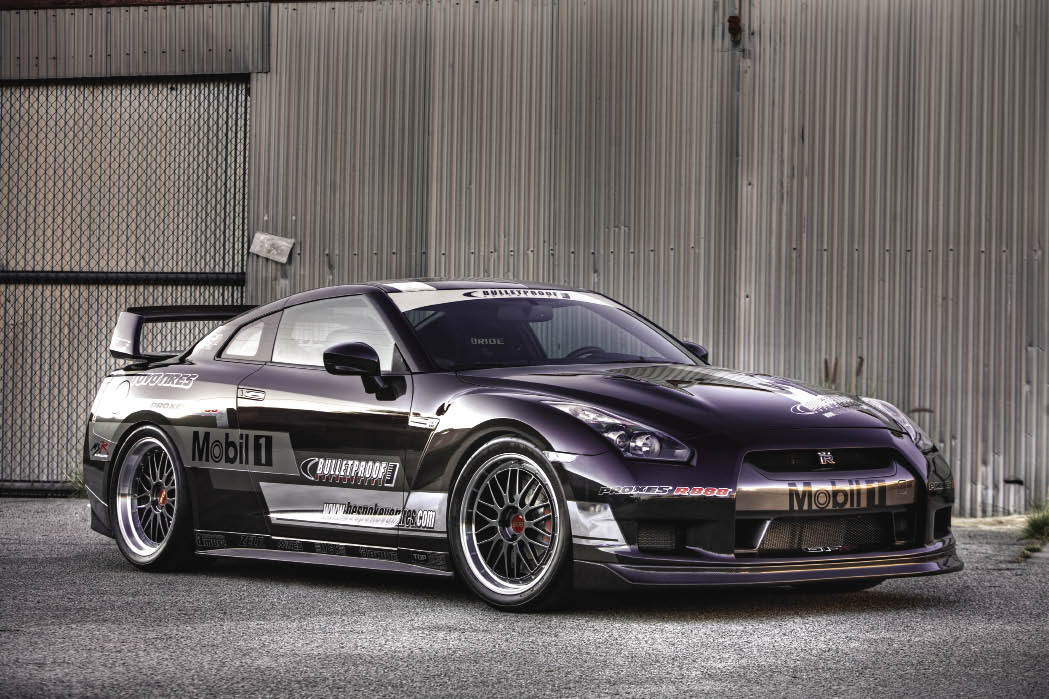 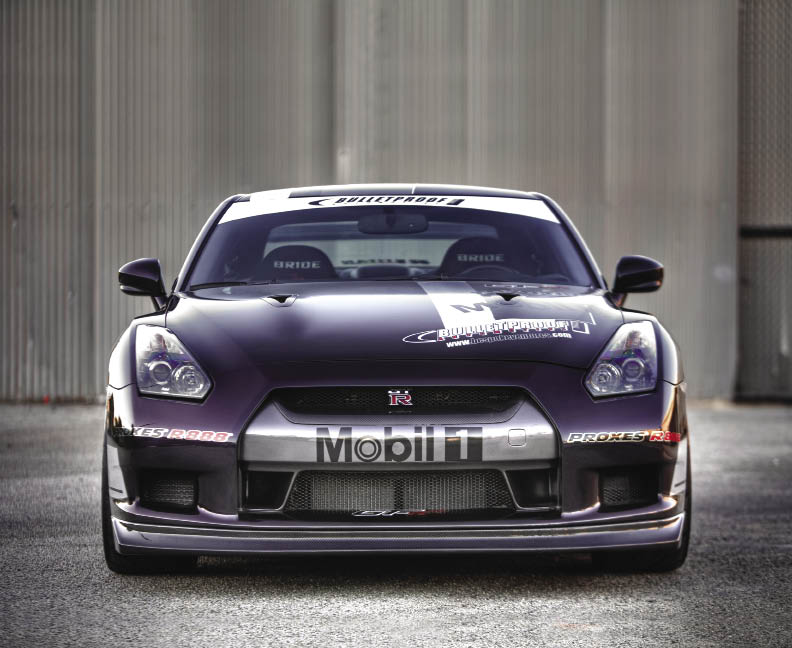 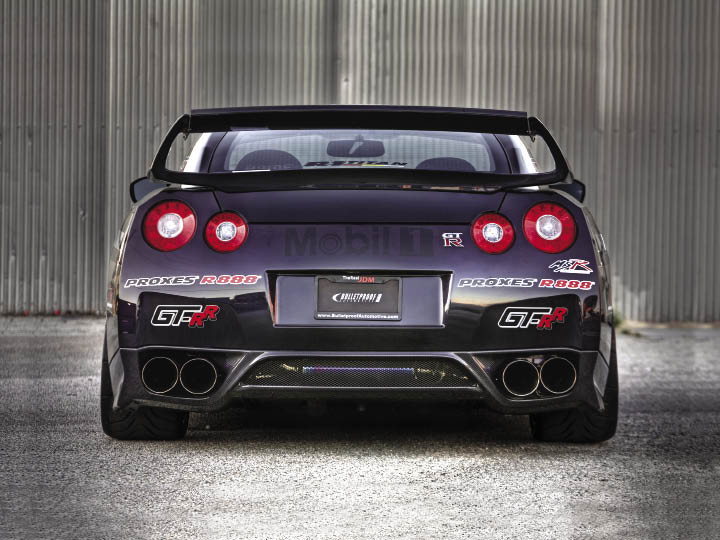 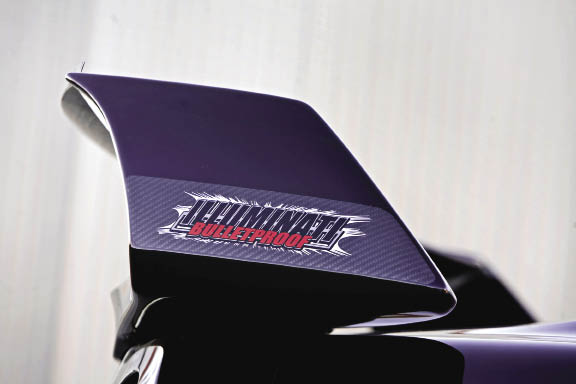 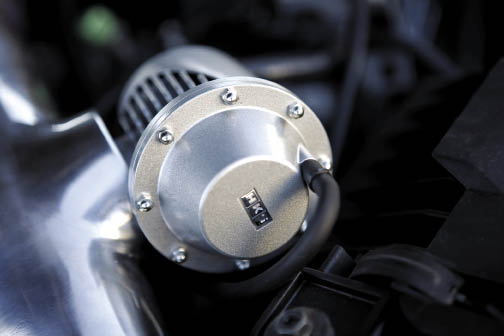 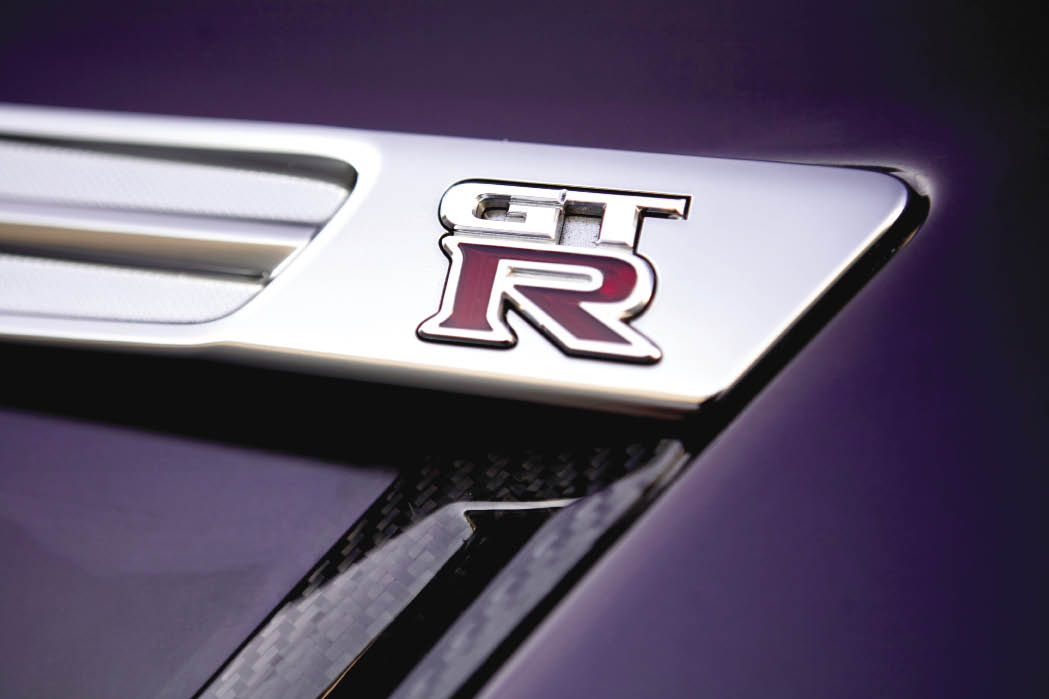 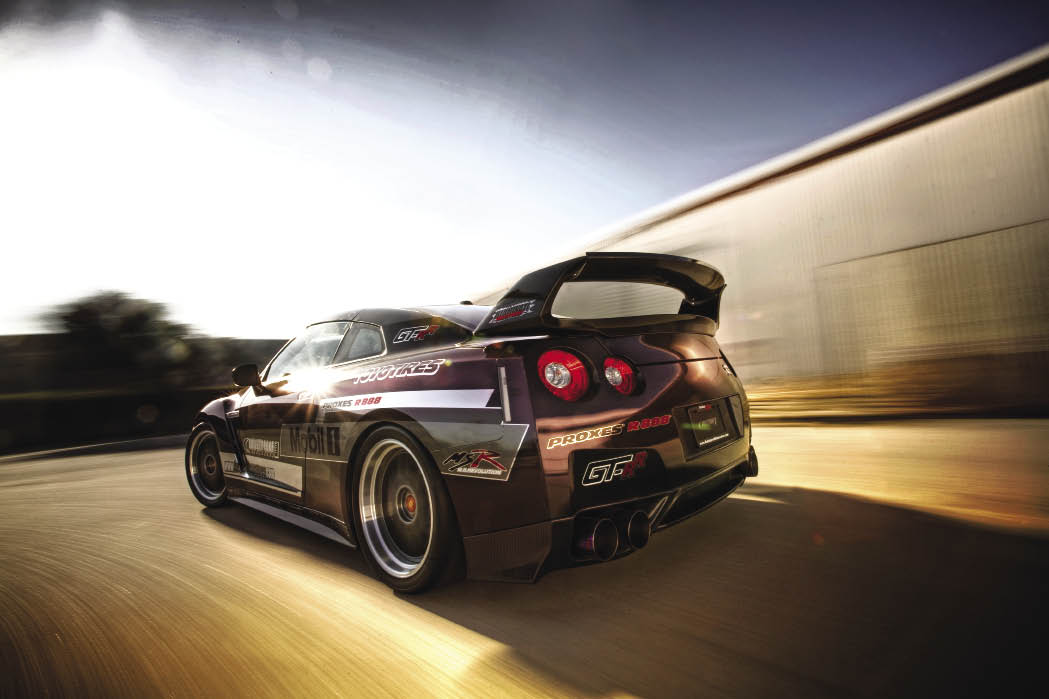