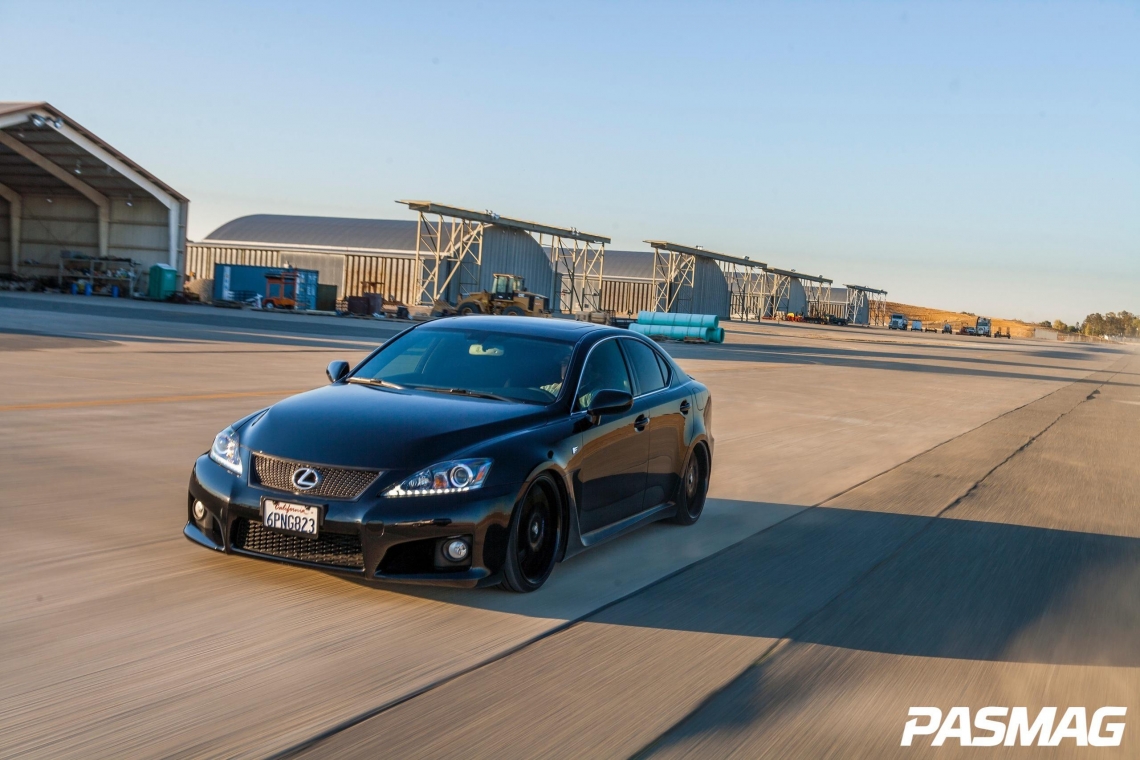 Brand loyalty is a coveted asset in the automotive marketplace. Every manufacturer strives to craft a following of enthusiasts of a certain sort: people who are well-enough off to be able to afford its vehicles, thus ensuring the company's continued success. Competing in the luxury arena is always a bit of an uphill battle and one that Toyota chose knowing full well the Lexus brand would have to go beyond consumers' expectations in order to establish the lineup on American soil. The IS Series has always been of interest to US buyers and, for California resident Steve Meade, when his IS 250 got slammed from behind while sitting at a stop light, he knew right away what he'd be buying next.

Meade planned to step up to an IS 350 as soon as he could, to the point of doubling up his car payments in order to have his ride paid off as soon as possible. Those plans changed in a blink of an eye one afternoon. With his IS 250 crushed, Meade made a video of the damage and uploaded it to YouTube. Within a day he received a call from the Lexus USA headquarters asking if he was okay. They promised to help out when he was ready to replace his car. Once the insurance payments were handled (thankfully he had not been badly injured), Meade picked up the keys to a new 2011 IS F. Rumored to be the love-child of some overly enthusiastic Toyota engineers in Japan who realized that, with a little effort, they could stuff a V8 into the IS 350 chassis, the IS-F drops all pretense of being a family-friendly machine. It is – and has always intended to be – the Toyota equivalent to BMW's mighty M5, the long-time ruler of the sport sedan landscape. Meade had not even left the dealer lot before making plans in his head.

“My dealer, who was great, was bragging about how nice the factory Mark Levinson 7.1 [audio] system was,” Meade said. “I told him I was ripping it out. He said 'Okay, well the new 2011 IS-F has all new suspension upgrades over the previous years.' I looked at him and said 'This thing isn't low enough, I am gonna rip all that out too.”

And true to his word, that's exactly what he did. The OEM suspension parted ways with the chassis in favor of a KW Variant 3 coil-over package set for a driveway- scraping ride height. Fender gaps were eradicated, and the wheels are tucked so hard you'd need a floor jack to read the name of the Pirelli P-Zeros hiding within. His custom AZA Forged three-piece wheels are color-matched to the gloss black finish and sized at 20 inches to help impart a sinister look. They're definitely not soccer mom, focus-group approved. The rest of the suspension is finished off with a GTSPEC front strut brace for stiffness and FIGS Engineering rear lower control arms and toe links for precision alignment. A word to the wise; when a rear wheel drive car is lowered this far, adjustable toe and camber links are necessary to keep from grinding the expensive rear donuts to dust.

Upping the ante in the engine bay, Meade turned to Gearhead Garage for the installation of a Holly Nitrous Oxide 100-hp wet-shot kit and a Takeda polished cold air intake. ISS Forged built a stainless steel catback Track exhaust system with four Magnaflow mufflers to replace the four OEM diffuser exhaust tips. Additionally, an A'PEXi throttle controller boosts power delivery and makes engine response programming that much easier. There's a stout 454 rear-wheel horsepower on tap, along with 443 lb-ft of stump-pulling torque. And the rest of the world wonders why we love V8 engines so much!

Exterior modifications are limited to VHT Night Shade coating on the rear tail lamps. This is a case where the manufacturer got it right from the very start. Case in point: the oversize Brembo 14.2-inch front and 13.6-inch rear brakes. The IS-F body needs absolutely no external changes to accentuate its strong lines. What it lacks in racing pedigree it makes up in aggression with a long nose (and V8-encompassing hood bulge) and short rear deck. There's no need for fads like boy-racer wings and stick on eyebrows; a handsome sedan like this never goes out of style.

Like he said, Meade tore out the Mark Levinson stereo components, keeping only the Lexus head unit and 6.5-inch touch screen. Custom fiberglass speaker pods were fabricated for the doors and kick panels and wrapped in black leather and suede to match the interior. Sacramento, California-based Katt Kustoms handled all of the hard work, stitching up the black suede leather with blue French seams. Meade took care of all of the audio system panel construction himself, crafting subwoofer and amplifier enclosures from one-inch MDF and multiple layers of fiberglass. Just like his seats, he had all of his panels covered in leather by Katt Kustoms, including the one in the trunk lid which retains the Rockford Fosgate 3sixty.3 sound system processor.

Meade even made removable covers embroidered with the IS F logo to hide the blue-clear backlit plexiglass panels etched with the F-Sport logo. DVD playback and navigation are available, and in addition to being Apple iPod ready, the head unit is tied in to the RF 3sixty.3. That powerful system controller feeds the signal to two Rockford Fosgate T2500 bdCP subwoofer amplifiers – one RF T1000.4 handles the mid range and mid bass notes, one RF T400 for the high frequencies, and a separate RF PBR-300.4 amplifier for rear fill. An iPad Mini serves as a song-selector and programming tool for the RF 3sixty.3 and is tucked into a fold-down mount above the driver's side visor.

The list of audio equipment is as impressive as it is long. In the trunk there's one Ascendant Audio SMD 15-inch subwoofer in a vented enclosure behind the plexiglass panel and three extra XS Power S975 batteries hidden within the confines. Two more shallow-mount P3 8-inch subwoofers are installed into custom kick panels. Four total RF T5 6.5-inch midbass speakers are installed in the front door pods along with four RF T5 one-inch tweeters – one each in the front and rear doors. Two more RF T5 6.5-inch speakers are installed in the rear, to fill the soundscape. Meade also hand-fabricated aluminum power distribution bars which reside in the bottom-mounted component plexiglass panel. With all that audio drawing voltage and amperage, the alternator had to be swapped out for a Mechaman 270a high-output alternator to provide sufficient juice for the massively augmented system.

Equally impressive, Meade completed his IS F in an astounding three months. “I got started right away...I couldn't help it, it's just me,” he said. “I rarely see an IS F on the road, and probably three total all-year long, but one thing I never see is one like mine.”

Luck, luxury, and loyalty; this ride has all three in spades. 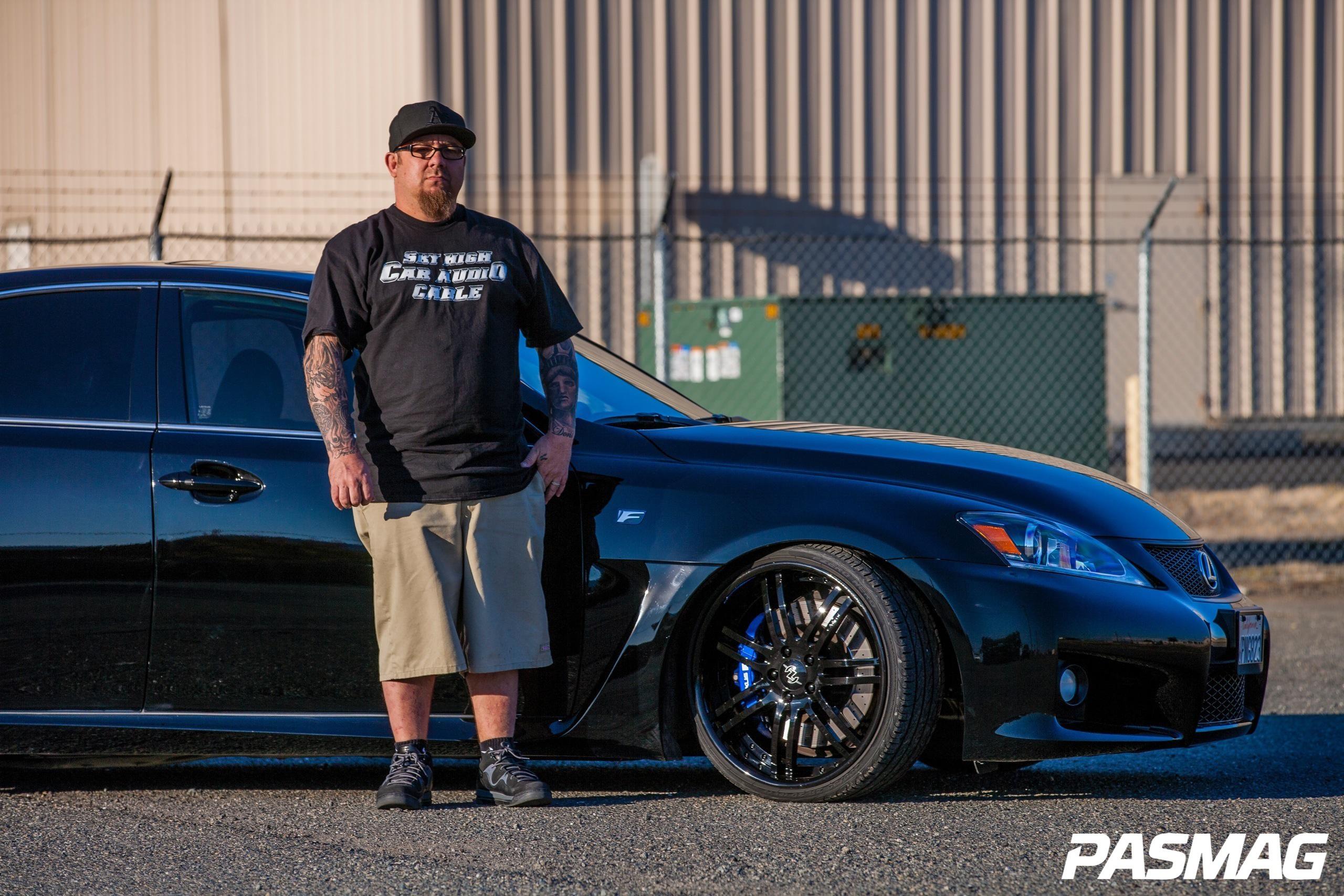 INTERIOR
Carbon Fiber interior trim
Custom (fiberglass speaker pods for doors and kick panels by SMD, trunk enclosure made from 1-in. MDF board and plexiglass, upholstery in leather and suede by Katt Kustoms)