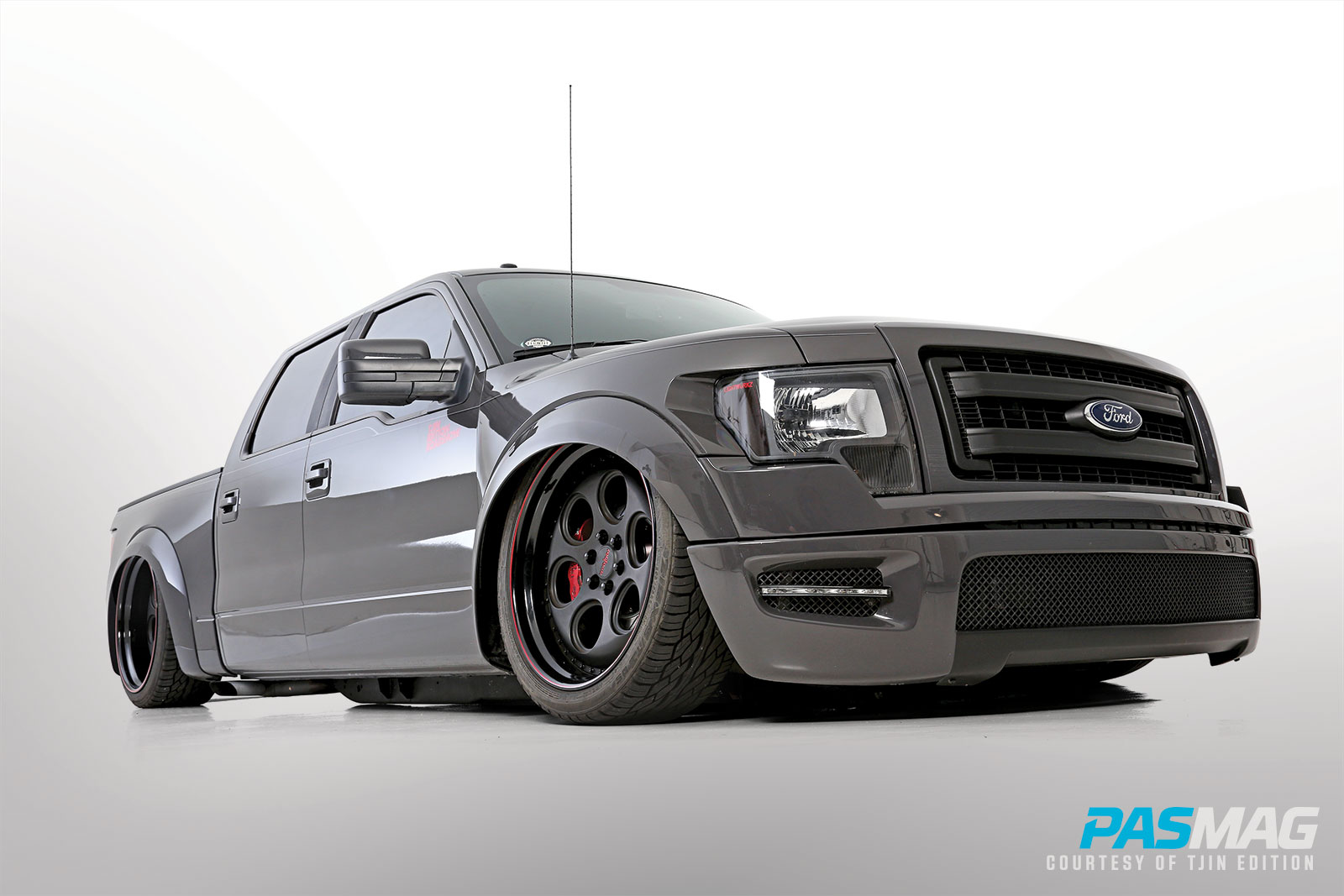 When you’ve got as much experience as Neil Tjin, finding a new way to challenge your craft is always at the pinnacle of your priority list. You have to challenge to progress, and yet, time and time again, he and his group at Tjin Edition seem to succeed, with crowd-pleasing results every time.

In this, one of his latest projects in coordination with the Ford Motor Company, Tjin pushes the boundaries of what can be done with the iconic F-150 pickup. Typically left to the devices of contractors and off-road enthusiasts of North America and the world over, the longstanding and industry-standard flatbed was given to Tjin to push it to the limit of design, customization and creativity.

Tjin approaches every build with a formula; it makes his vehicles instantly stand out in the crowd, while being unapologetically recognizable as a project from the man who was instrumental at the dawn of the sport compact movement in the early ‘90s. His ability to infuse personal tastes that speak to the end viewer is a special part of each project, and here, it’s no different.

At a time when lifted and off-road styles are taking over the trucking airwaves, Tjin’s F-150 challenges those sentiments by being massive despite its size. There’s a reason nothing else like this exists, and it’s simply the planning and work required to pull it off.

Sure, installing a lift kit offers a whole host of issues to tackle, but after talking with Tjin, lowering his F-150 onto the three-stage Accuair e-Level/i-Level air suspension system was beyond anything even he ever imagined.

“The whole suspension setup took over 300 hours to complete,” he says. “Honestly, had I known it would’ve taken that long, I probably never would have done it. But the payoff was worth it and I was able to gain a lot of experience to put toward my current [truck] builds.” 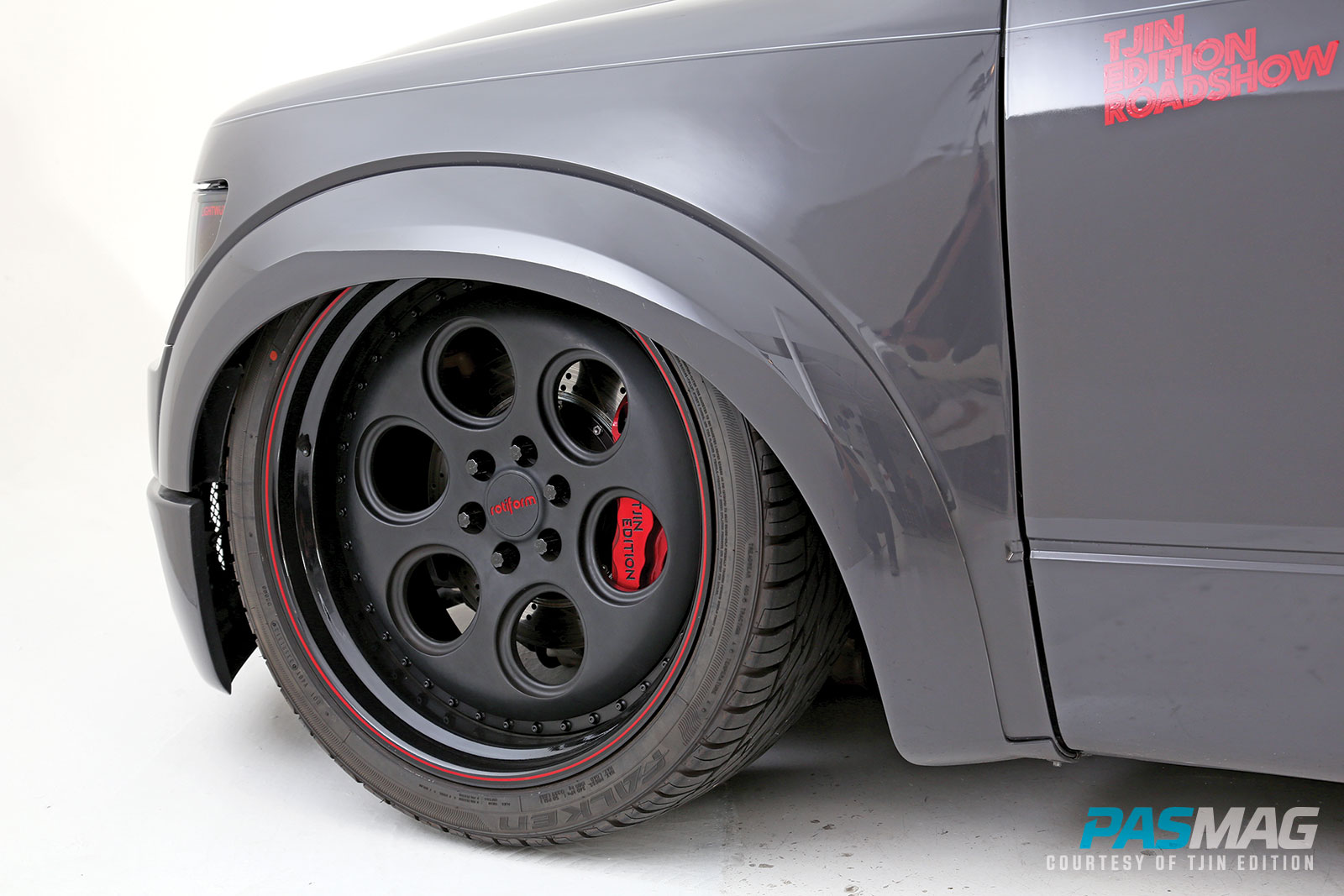 Ford’s F-150 has been the subject of numerous lowered builds in the past, but the 2013 that Tjin was commissioned suffered one major flaw. It wasn’t the result of error, but rather the sheer lack of aftermarket suspension parts.

“We were taking parts from the F-150 Lightning, the Raptor – basically anything that would fit – and had to customize or fabricate a ridiculous amount of parts,” he says.

The idea was to get the F-150 as low to the ground as possible, so that meant sourcing, cutting and welding components all over.

The team picked Chris Alston’s Chassisworks as the supplier for the majority of their components, ranging from arms to bars and linkages, and although the Tjin team chose from the cream of the crop, the setup of the Tjin F-150 was far in the opposite direction of what the parts were intended for.

“Even with our parts sourced, the team at Unique Fabrications had to build 90-percent of the suspension [because of how low it sits],” Tjin says.

For many, it would have spelled defeat, but Tjin had a vision and sought to make it a reality.

The truck’s glued-to-the-ground stance is nothing short of extraordinary. Firstly, in show mode, or Accuair setting no. 1, the F-150 literally sits frame-to-the-floor. There’s a noticeable thud when the CAC airbags are dropped all the way down, and to accomplish this took more than just suspension work. 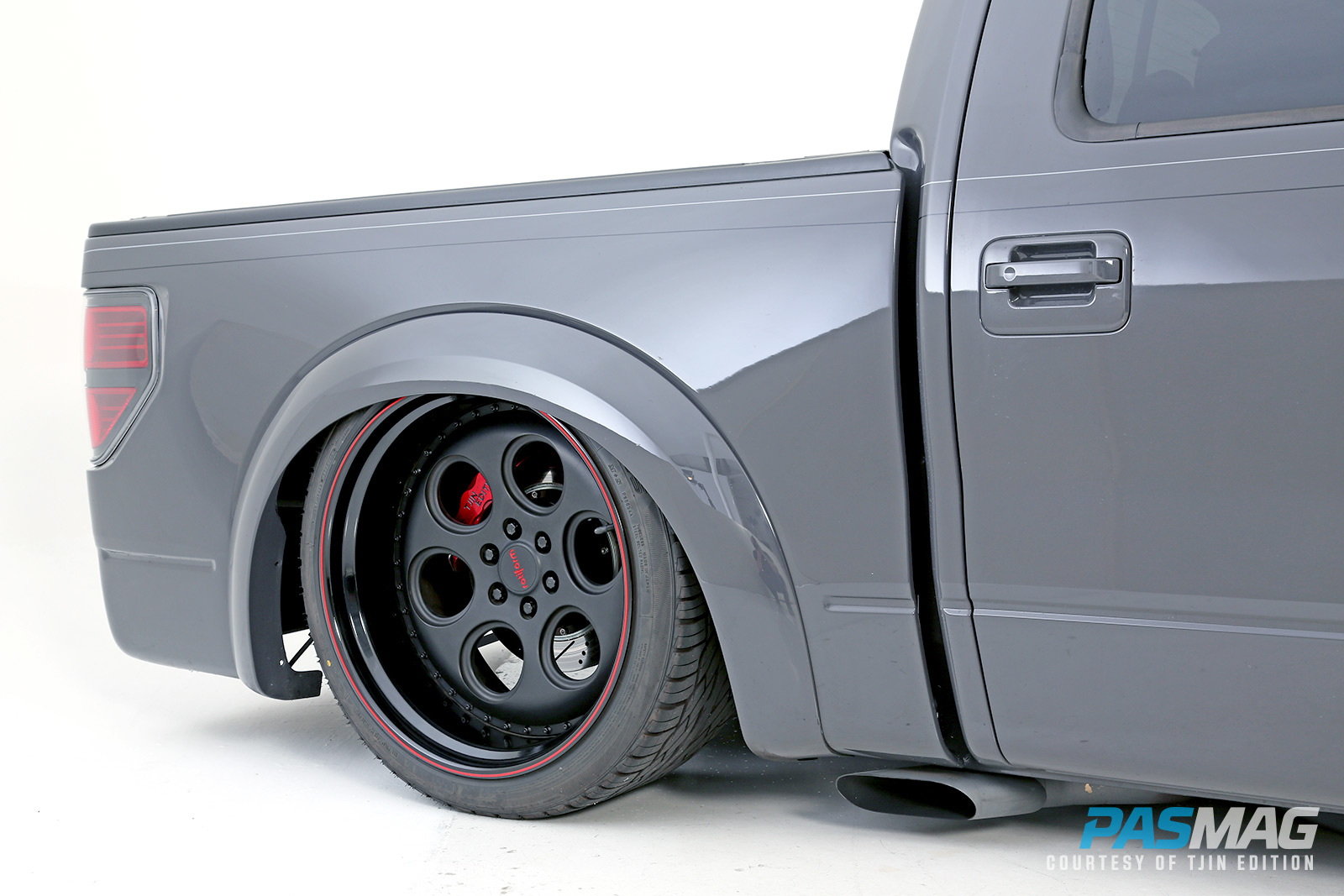 Unique Fabrications, Adam Carpenter and Josh Freeman had the responsibility of lifting a number of components to make sure the F-150 could sit and do so safely. The gas tank, four-link suspension, rear valance and subframe all had to be raised three-inches to avoid being crushed by the truck’s 5,000+ lb. gross weight. Then there’s the rear frame tubing, which underwent surgery to allow for proper fitment of the hulking 24x12-inch one-off Rotiform Six-Shooter wheels and Falken tires which, anywhere else would appear preposterous, but here, fit perfectly. Inside is Baer’s six-piston big brake kit, painted in matching red and stamped with the Tjin Edition logo.

A simple button push on the e-Level controller lifts the F-150 to mode two for driving, and in mode three, it actually stands three-inches above stock ride height.

And you thought it was just dropped.

For Tjin, this truck was all about doing something different. The bodywork was another major undertaking in itself. The custom Axalta color pallet is an ode to his brother-in-law Osbert Huang, who Tjin says has basically trademarked gunmetal grey clothing. DTM Auto Body was tasked with incorporating a number of Ford trademarks that are subtle enough to make you think it’s 100-percent F-150, but as Tjin explains, it’s anything but.

“The bed and rear fenders are all metal and taken from a Raptor. The front fenders are all Raptor and cut and lowered by 1.5 inches to line up with the F-150 hood, which we kept. We also wanted to keep the grill from the F-150 to stick with the factory appearance, but then we took two Raptor front bumpers and welded them together to make it sit lower and match the rest of the truck.” 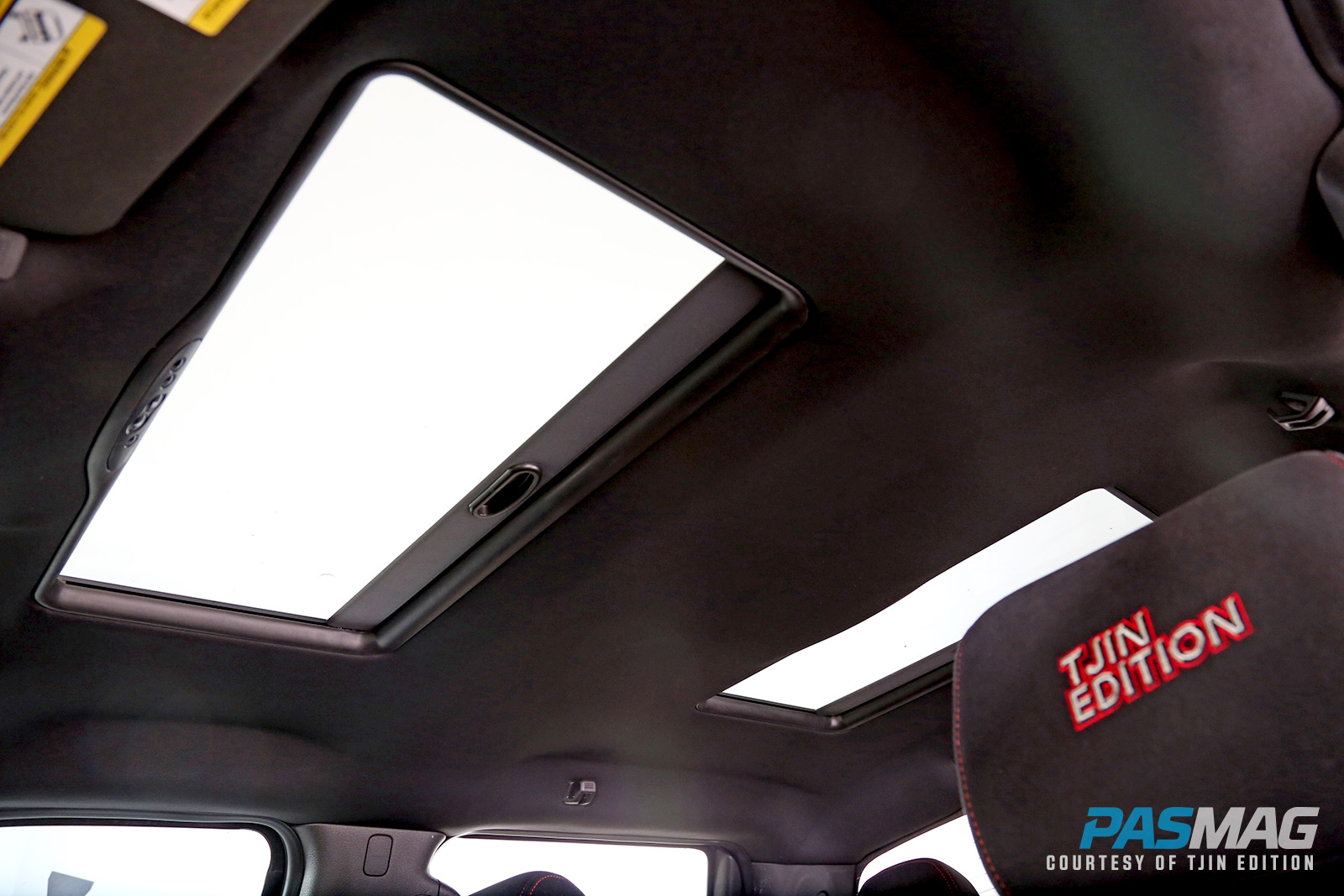 At the back, Tjin wanted the F-150 to be devoid of any obtrusive OEM bits, so DTM installed a rear valance, molded it into the rear fenders and modified it to match the outer body lines of the truck bed.

Above the cab, Ray at Webasto installed two separate, motorized sunroofs, which not only required a great deal of chopping, but reshaping the entire roof to match the glass profile.

Under the hood, the 3.5-liter V6 EcoBoost received Vortech’s intercooler and tuning treatment and Royal Purple fluids. On the exit side is a custom-made Magnaflow exhaust system and Unique Fabrication tips that push the stock output an extra 80-horsepower and 100 lb-ft of torque for 445 and 520, respectively.

Tjin’s F-150, while appearing to be all about stance, is anything but. Today, it is the force behind Tjin Edition, towing the company’s best fabrications across the country on a weekly basis as part of the Tjin Edition Roadshow. The F-150 took SEMA by storm last year, and this time, it will be hauling Tjin’s latest creation – a Ford Expedition – which is set to build on the pickup’s momentum in every way.

We can’t wait to see it.

PASMAG's Tuning 365: Episode 4
In this episode of Tuning365, we sit down with Neil Tjin of Tjin Edition, get a close look at Brian Nyman's 1998 Tahoe, check out some product from...

Down To Earth: Tjin Edition’s Slammed Second Coming
Photography by Gene Tjin You know when your name is associated with an OEM brand, you’re doing something extremely right in the car world. Each...

Cooper Zeon RS3-G1 Tire Review (One week in)
Photography by Micky Slinger Ah, November; the transitioning month for all Canadian auto enthusiasts where we all must choose whether to drive on...

Rotary Frankenstein: Phil Sohn's 1993 Mazda RX-7 FD3S
Photos by Phil Sohn Somewhere in the hills of Alabama there's a garage where RX-7s go to be reborn. Inside, a cackling maniac pieces together...

Keeping It Fresh: Tjin Edition's 2015 Hyundai Genesis Coupe RS
Photos by Logan Warfield Standing out can be a huge challenge, especially when it comes to a stage the size of SEMA. As if that wasn't pressure...