If you have been followingPAS over the last few years, you will know about Team ETC. The Elite Tuners of Canada program builds graced the pages of the PAS SEMA issue for three years in a row. As the team transitions into building domestic V8s, we wanted to take a closer look at their latest creation, a new Camaro SS. Now this isn’t your average Camaro and owner. Serge Leger is quick to point out that it is more than a multi-layer paint job and deep dish wheels. 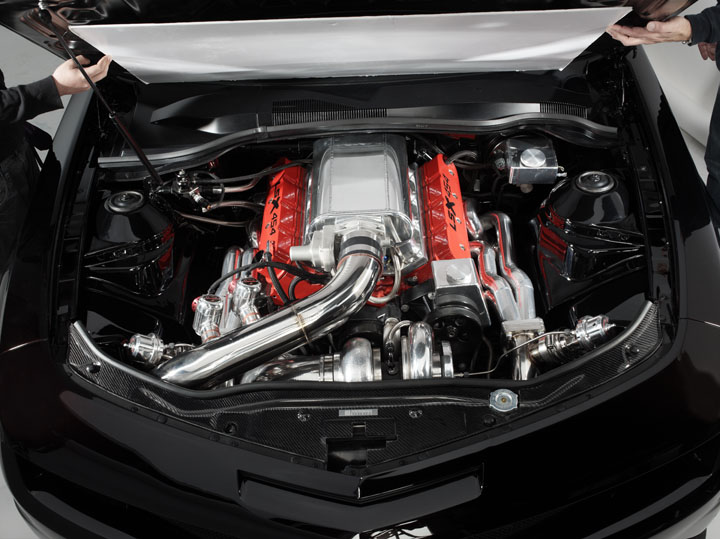 Like all of their creations, Team ETC opted to go with turbo power to get their project noticed. The big LSX 454ci crate motor was introduced late last year but has had more jam put into it courtesy of a massive Turbonetics 91mm hybrid turbo. This snail is good for over 1000 ponies and has the supporting mods to do it. The turbo is fed by custom tubular exhaust manifolds along with a pair of Turbonetics 45mm wastegates to regulate the boost. From there, the 5-inch custom stainless steel downpipes lead into dual exhausts that exit on both sides from custom oval tips. On the chilled side, air is hauled into custom piping that heads to a polished twin front mount, which is fused together. The charge air is vented with a pair of Turbonetics Duo 35mm blow-off valves when the throttle plate attached to the massive sheet metal intake slams shut. The fuel is delivered courtesy of twin Aeromotive A1000 pumps pushing race gas through Earl’s SS lines and regulated by an Aeromotive FPR then dispensed through eight 2150cc injectors.

Leger took his time perfecting the engine bay by hiding or removing everything he could. A massive wire tuck put all of the factory wiring out of sight. Leger relocated the fuse box, ignition coils, ABS unit, air bag sensor and all of the reservoirs were either concealed or taken out. All you can see is an engine capable of producing  quadruple-digit numbers. As with the Cadillac he built in 2008, Leger estimates the power to be 1,400whp with 900lb-ft of torque when the car is completed. 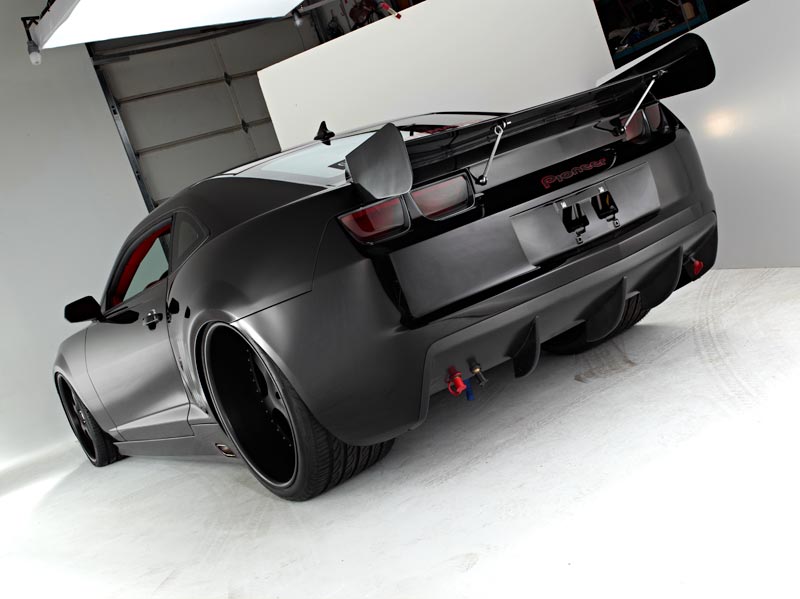 Putting that kind of power to the ground was not an easy road. With more than triple the factory horsepower, the driveline and chassis needed extensive work. The car has been back halved with a custom carbon fiber tub while the factory rails were extended and strengthened. In order for the Moser 9-inch rear end to work with the new suspension it had to be modified. An all custom multi-link suspension was crafted underneath the Camaro, using QA1 coilovers. From there the attention turned to the driveline where a custom driveshaft was fabricated and Moser axles were installed.

The driveline was ready to handle all of that torque, but the wheel and tire selection would determine if it could be put down. At first glance, the dark wheels don’t really display their features but under the lights it is obvious the massive lip is made of dry carbon fiber. These custom Strut wheels measure 22x10-inch in the front and a whopping 24x15-inch rear, which the Camaro bodywork does accommodate. Finding rubber for this custom setup was not easy. In fact it is the only one type of rubber in the world that could be used in the rear. The front tire is a common 265/35R22 Pirelli P Zero but the rear tire is a shocking 405/25R24. You don’t see tubbed out setups running a tread tire like this. Peeking from behind the spokes is a custom spec set of Baer 6-piston brakes gripping 2-piece rotors. 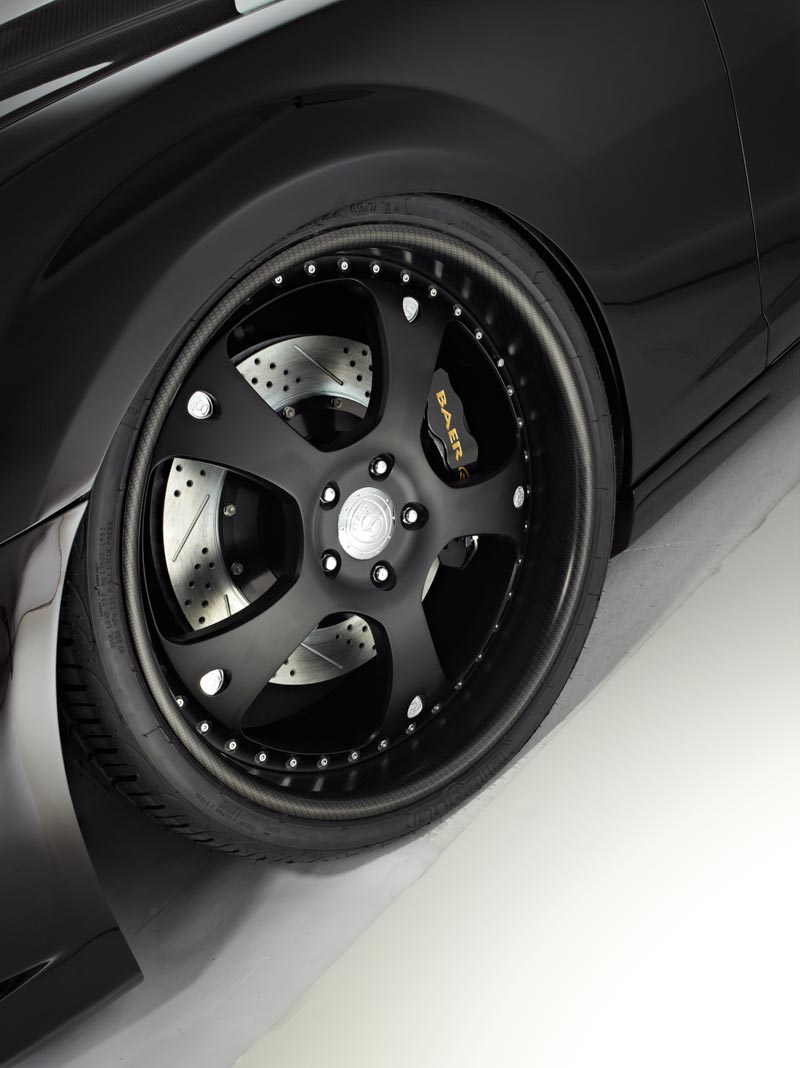 The style of the ETC Camaro this time around may be more subdued than what we have seen before, but then again the car had did have a valid registration sticker on it. The front bumper was customized to accommodate the massive front mounted intercooler. The rear bumper was also modified and the sideskirts are designed to visually level out the tires and feature an opening for the exhaust tips. A Strut carbon fiber grille was added to the front along with a striking ‘Strut’ emblem to replace the Chevy “bow-tie.” The entire body had been shaved and smoothed before being hit in several layers of PPG Nexa Black Cherry, an innovated water-based paint.

Step inside the interior and there is barely anything recognizably GM. The seats were custom fabricated as were the rear seats before being recovered in imported Italian leather. The fiery red hide is also covering the dash which features a battery of Auto Meter gauges including fuel, boost, wideband and oil pressure. The rest of the interior panels are all custom, including the headliner, door cards, rear quarters as well as the center console.

Pioneer Electronics then stepped into address the multimedia components of the build with their Premier line. At the heart of the system is the AVIC-Z110BT, the flagship in dash navigation, Bluetooth and DVD system. The signals are fed to a TS-PRSD2000SPL Premier mono amp which drives the single 12-inch shallow mount TS-SW1201S2 Premier sub. The mids and highs are amped up by a PRS-A900 4-channel Premier amp powering up four TS-C720PRS 6.75-inch Premier components. To cap off the system a back up cam was added in addition to an Apple Mac Mini with WiFi and 3G internet connectivity.

It is safe to say that team ETC has definitely migrated from the Sport Compact scene and is now playing with old boys club at SEMA – the sort of club where builds take years to complete and have 6-figure budgets. Leger’s total investment in this build was 3800 man hours and $320,000, and it was our duty to show how that it was much more than skin deep.