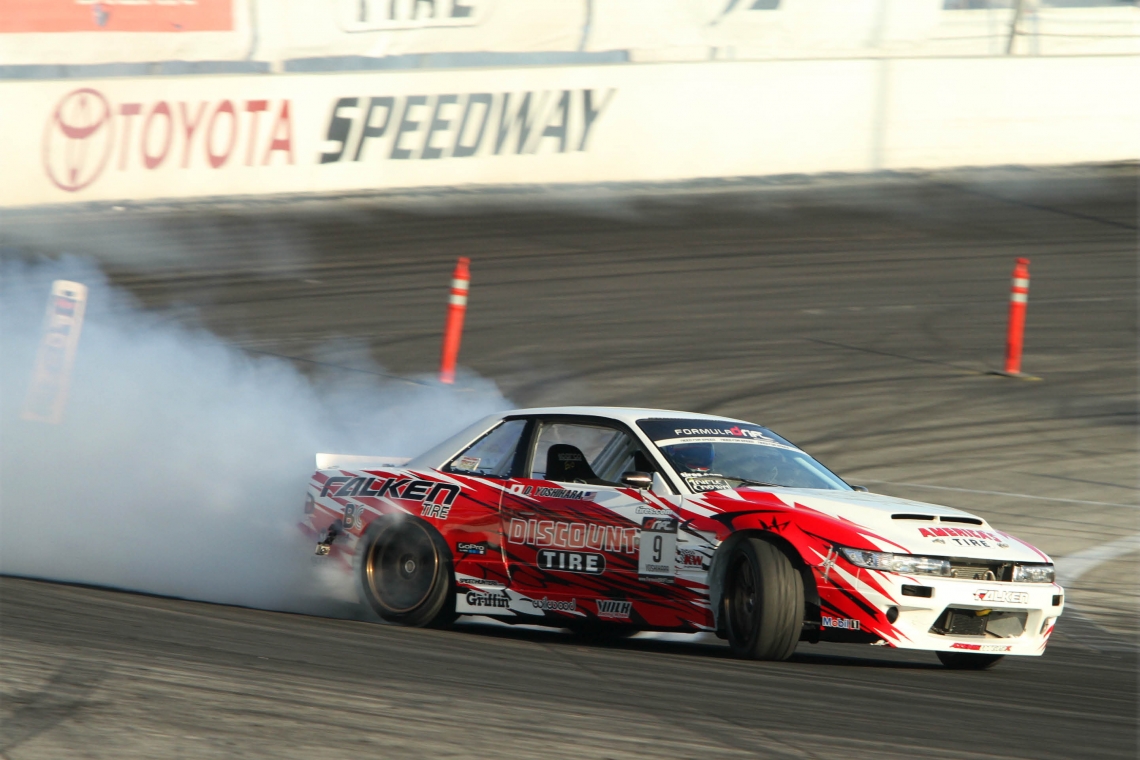 In recent years, Formula DRIFT cars have increasingly pushed the limits of technology and complexity in an effort to maximize the grip of the tires they run on. Daijiro Yoshihara’s Discount Tire Falken S13 is refreshingly simple, utilizing one of the oldest chassis in the series and a slew of off-the-shelf parts to build a simple yet effective drift car.

With the right minds on the team and one of the most experienced drift car drivers on the grid, the car has proven to be one of the best cars on the grid in the past two seasons, scoring four event wins and three additional podiums. Interestingly enough, the car was initially pieced together with a slew of parts from the Falken Tire race car warehouse. 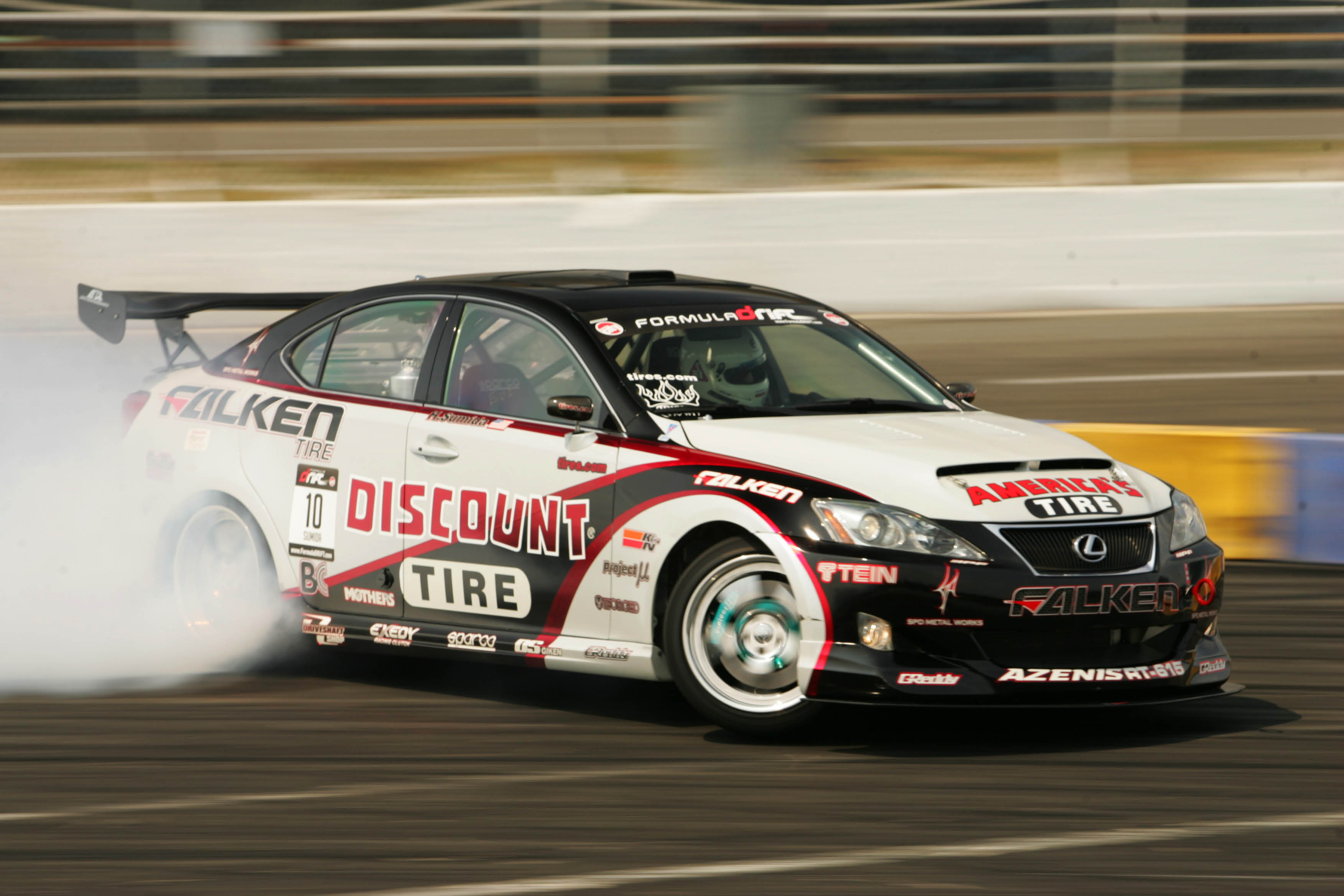 Back in 2009, Dai Yoshihara was driving a V8-powered IS 350 which was the epitome of technology in drift cars. The car featured a fully-built high horsepower V8 motor sandwiched into a modern chassis with rear-mount radiators, an elaborately engineered set of custom suspension arms, yet would finish no higher than the top 32. Unfortunately, the car had an untimely meeting with the wall (the wall won), which left the team with just eight days to find a replacement car to finish the season. Back in Los Angeles, the team resurrected the former S13 coupe chassis from Ross Petty, snagged anLS2 crate motor which sat in Ben Schwartz’s Saturn Sky during the 2007 season (before the car was totaled in a crash), and put together enough parts to get the car running and FD-legal again. Amazingly, after nearly no sleep for anyone on the team during those eight days, the car arrived in Sonoma, California and was competitive right out of the gate. Yoshihara went on to earn a top 16 and top eight in the final two events, proving the car was competitive.

Over the past two seasons, the car has evolved into its current form, and is now two full rebuilds removed from the eight-day wonder. The only things left from the original build are the VIN number and driver’s name on the door. Over the winter, the car was stripped to bare chassis, mediablasted, seam welded, and rebuilt from bare metal. Scott Dodgion of SPD Metalworks is responsible for all aspects relating to the build of the car, having been a crew chief on Formula D teams since the first year of the series in 2004. Due to the tire-to-weight rule introduced this year, the car had to actually gain several pounds in order to be legal for the 275mm wide Falken tire. Dodgion used that as an opportunity to beef up the roll cage and build additional protection into the tubular trunk and front end supports to prevent damage in a car-to-car collision. 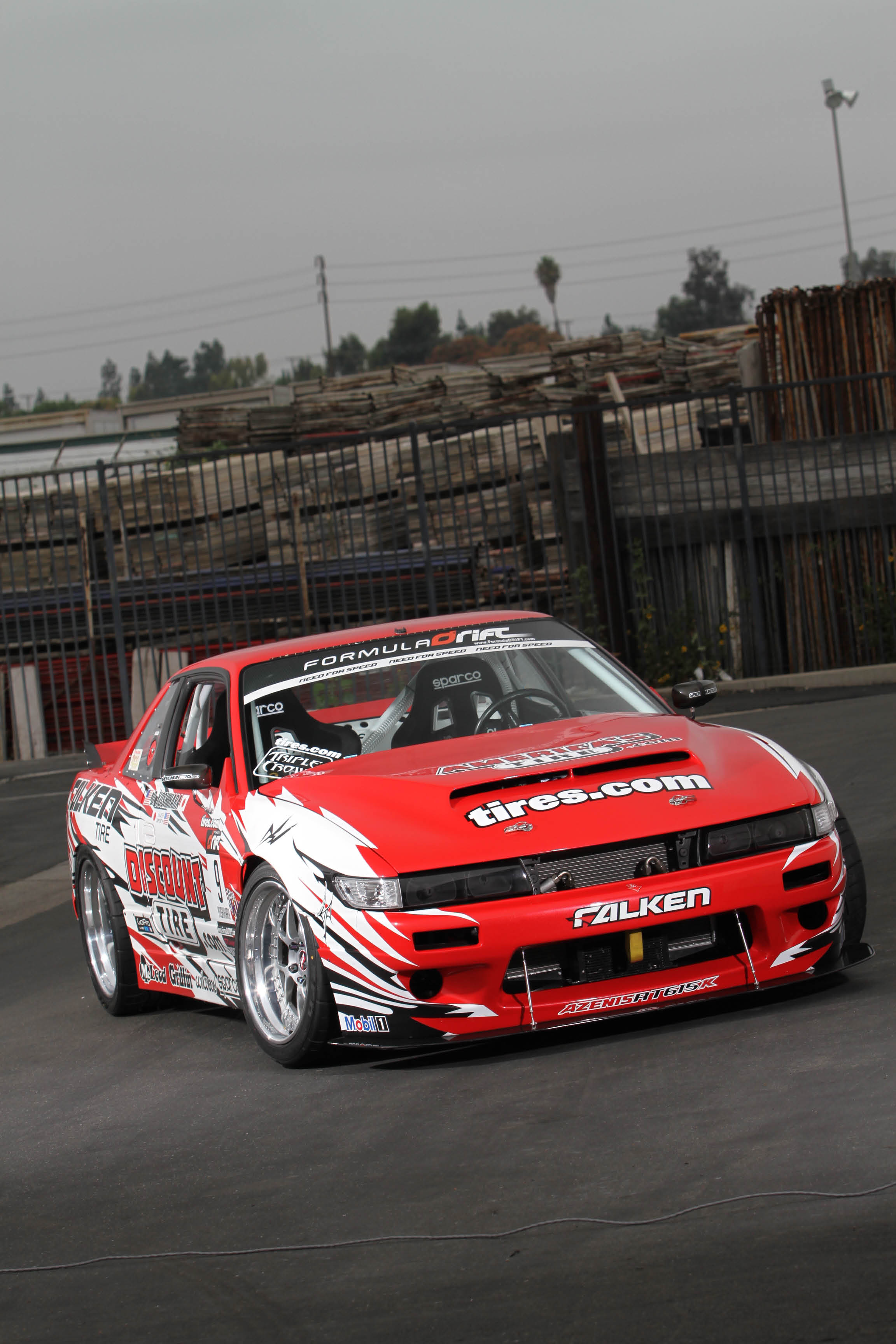 A GM LS2 crate motor (which had been replaced with an upgraded motor in 2010) was ditched for a fully-built LS7 motor from Redline Performance in Anaheim, which pushes out well over 500 horsepower from the 13:1 compression 427 cubic inch naturally-aspirated motor. The motor is mated to a FAST intake manifold, 102mm throttle body, and custom intake with K&N filter. Spent gases are spewed out custom headers and thru the 5” ovular exhaust. All engine vitals are controlled by a Motec MLS ECU. Cooling is managed by the massive Griffin dual-pass radiator. Next to the radiator, a pair of coolers- one for oil and another for power steering- keep everything from boiling over. Putting the power to the ground, a G-force GSR transmission is mated to a McLeod twin-disc clutch, and power spins thru the Winters quick-change rear diff which is equipped with a spool for traction control.

Inside the car, the interior is all business. The roll cage has been updated by SPD Metal Works to comply with the latest safety requirements and is reinforced to ensure maximum safety of Yoshihara in the event of a collision. A pair of Sparco seats and harnesses keep both driver and a potential passenger in one place at all times, while Yoshihara’s inputs are handled thru the Nardi steering wheel. Outside of the Pride Performance Carbon dash, custom switch panel between the seats to handle ignition and other duties and the Motec dash display, the interior is void of most creature comforts normally found in an everyday street car. 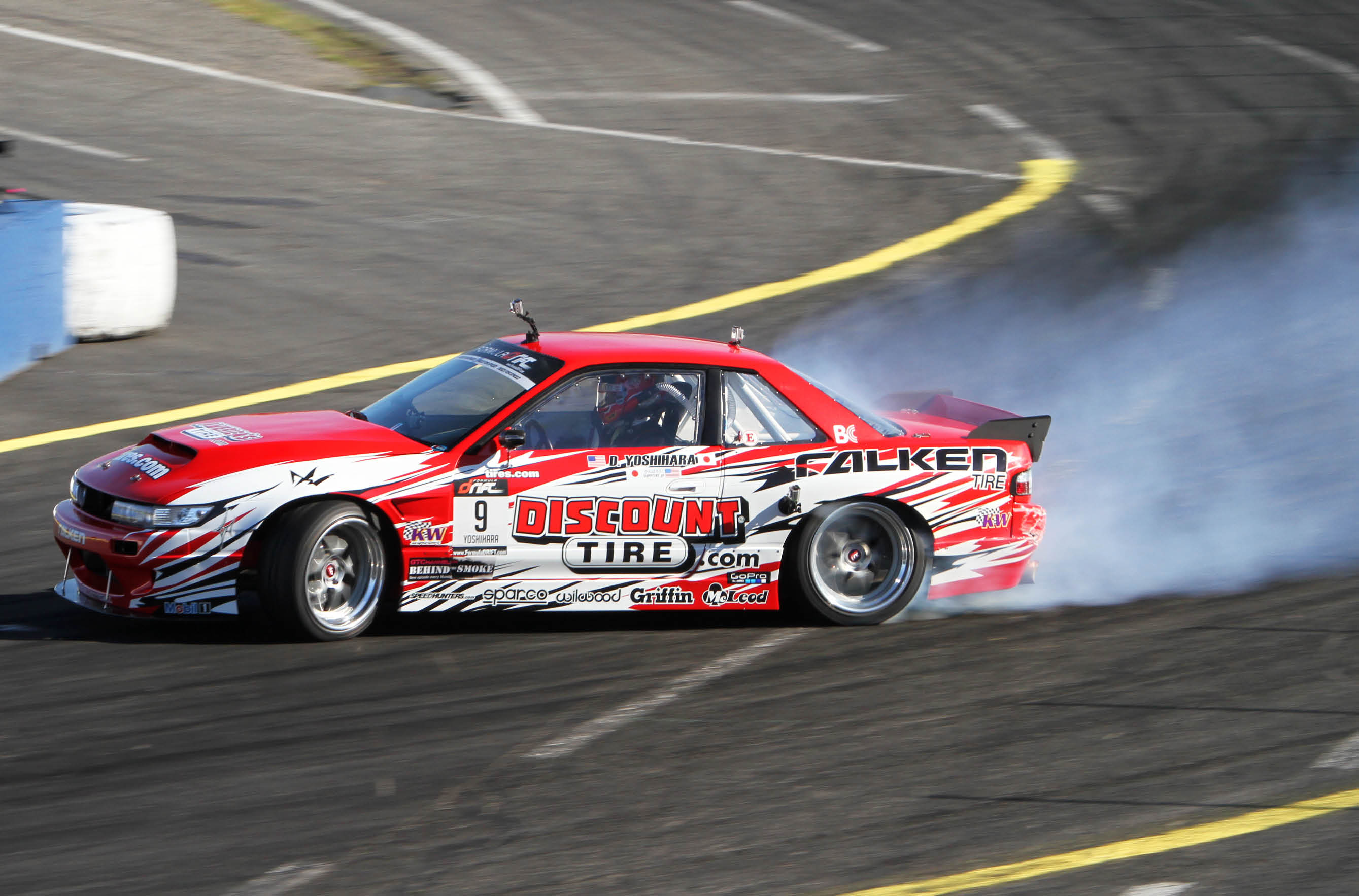 The magic of this car comes together through the suspension, namely with the tuning of Falken suspension aficionado Mike Kojima. Each corner sits on a set of KW Coilovers with custom spring rates and valving designed to maximize squatting under acceleration but stabilize the car once it’s pitched sideways. A combination of Nagisa lower control arms, SPL tension rods and rear control arms, and custom spindles provides the combination of adjustment to fine tune the caster, camber, and toe to the precise settings of Master Kojima to maximize the grip out of the Falken 615K tires. At each track, the car is dialed in for the type of track surface and judging requirements that have been set forth by Formula D staff. While we’d love to give you the specific settings Yoshihara uses at each track, we’d then have to kill you to prevent the information from getting back to other Formula D teams.

The latest makeover of the exterior of the car is definitely the most attractive. Drifting fanboys flock to the 6666 Customs Rocket Bunny bodykit, which is incredibly difficult to find here in the US. Yoshihara has always been partial to the dual-brick projectors from the S13, and this year’s look integrates custom smoked headlight covers into the front end. SPD modified the hood to integrate a hood scoop in an effort to keep the engine bay cool, fiberglass doors replace the OEM steel units to save weight, and an APR front splitter and rear spoiler endplates help stabilize the car at high speeds. The entire car features a custom graphics package which stays true to the original Rocket Bunny liveries that have become the staple of the brand. Finishing out the look, a set of 18” Yoshihara Design D59F wheels are the first wheel of Yoshihara’s signature brand, set to be released to the public later this year. 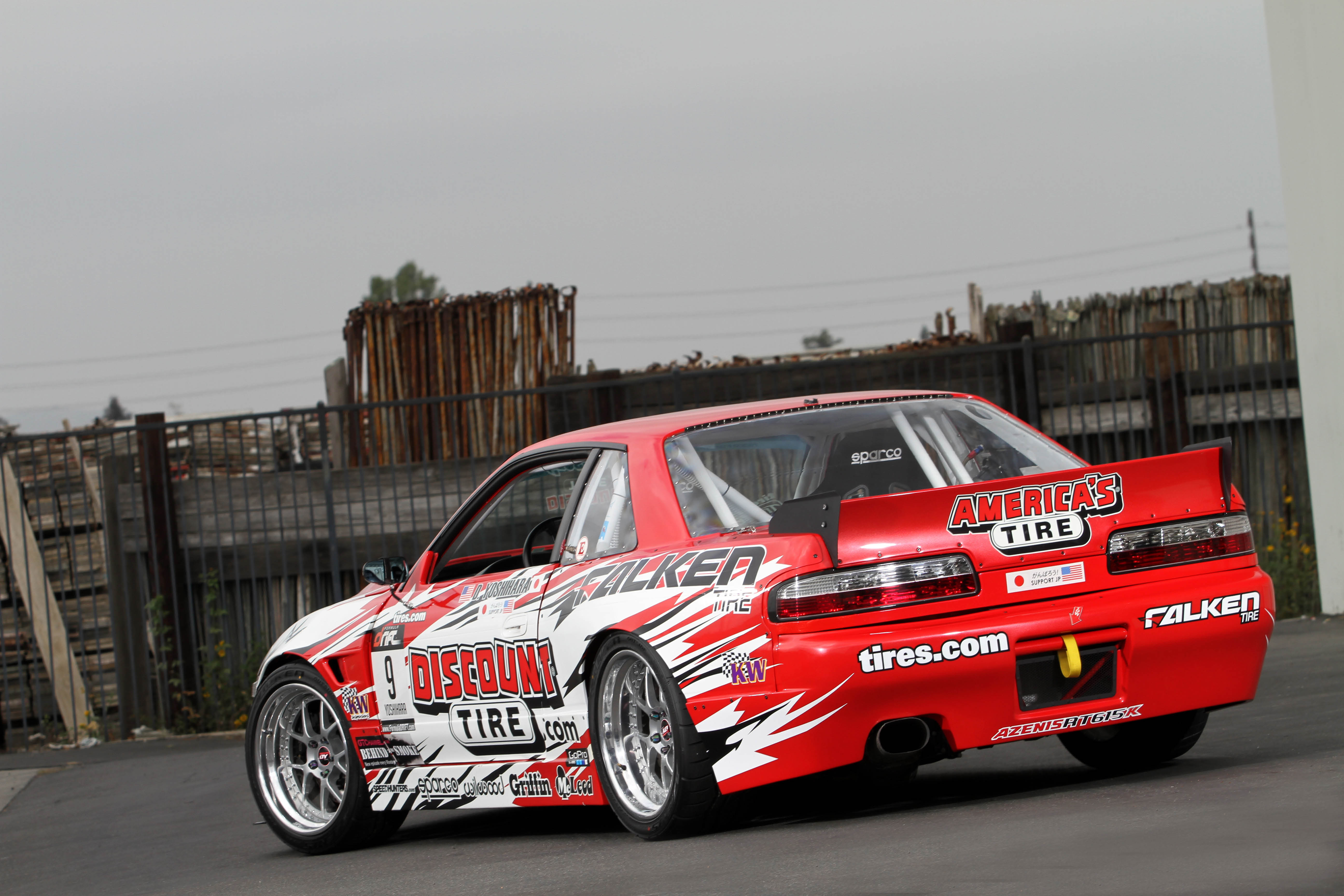 Last season, Yoshihara piloted the car to two wins in Atlanta and New Jersey as well as a second place finish in Vegas on his way to a fourth place overall finish. While many would be happy with that, the team is aiming for a season championship with the car, knowing that all pieces to the puzzle are there to make it happen. Yoshihara has finished in the top five of the championship in six out of seven Formula D seasons, proving he’s one of the best on the grid. 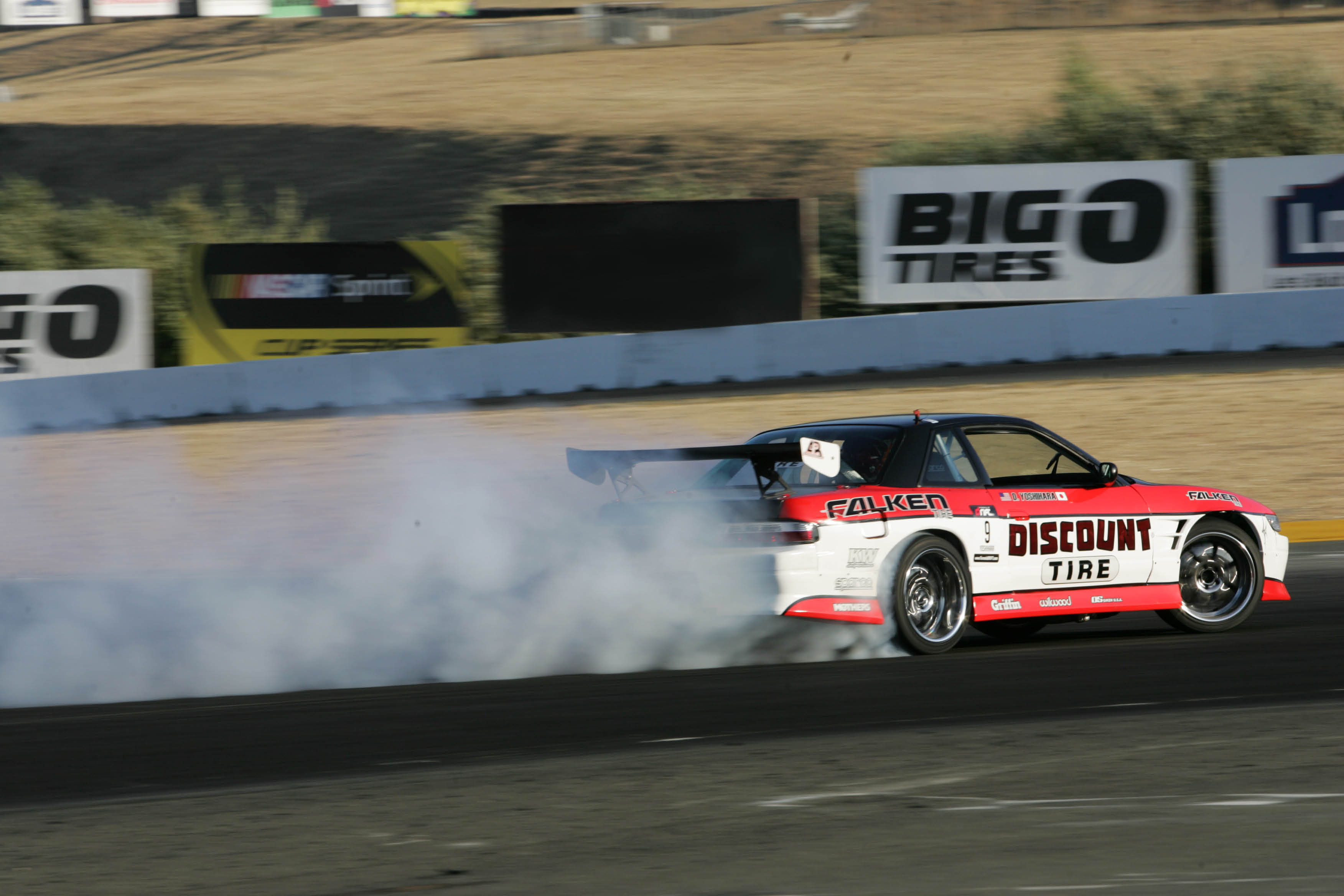 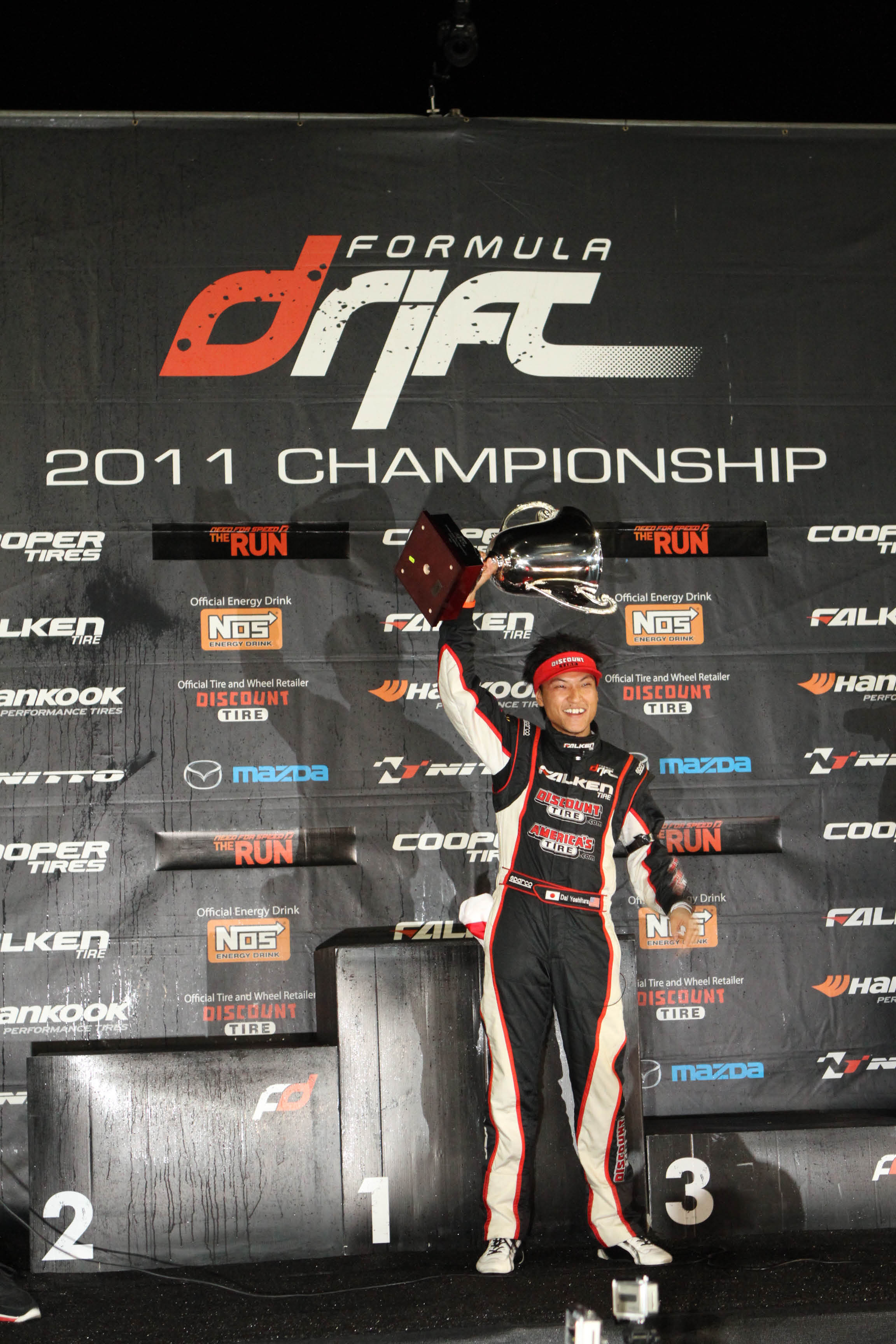 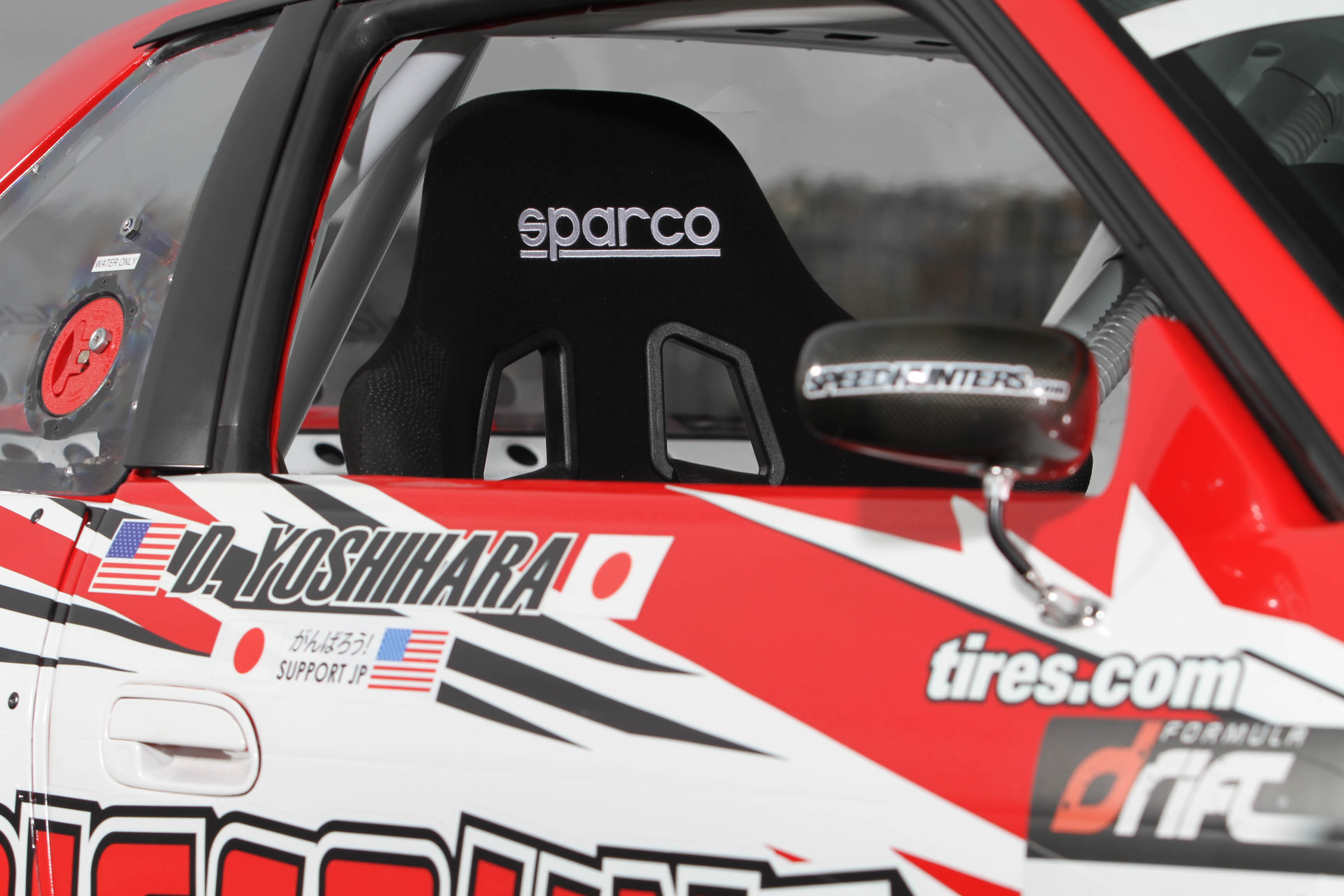 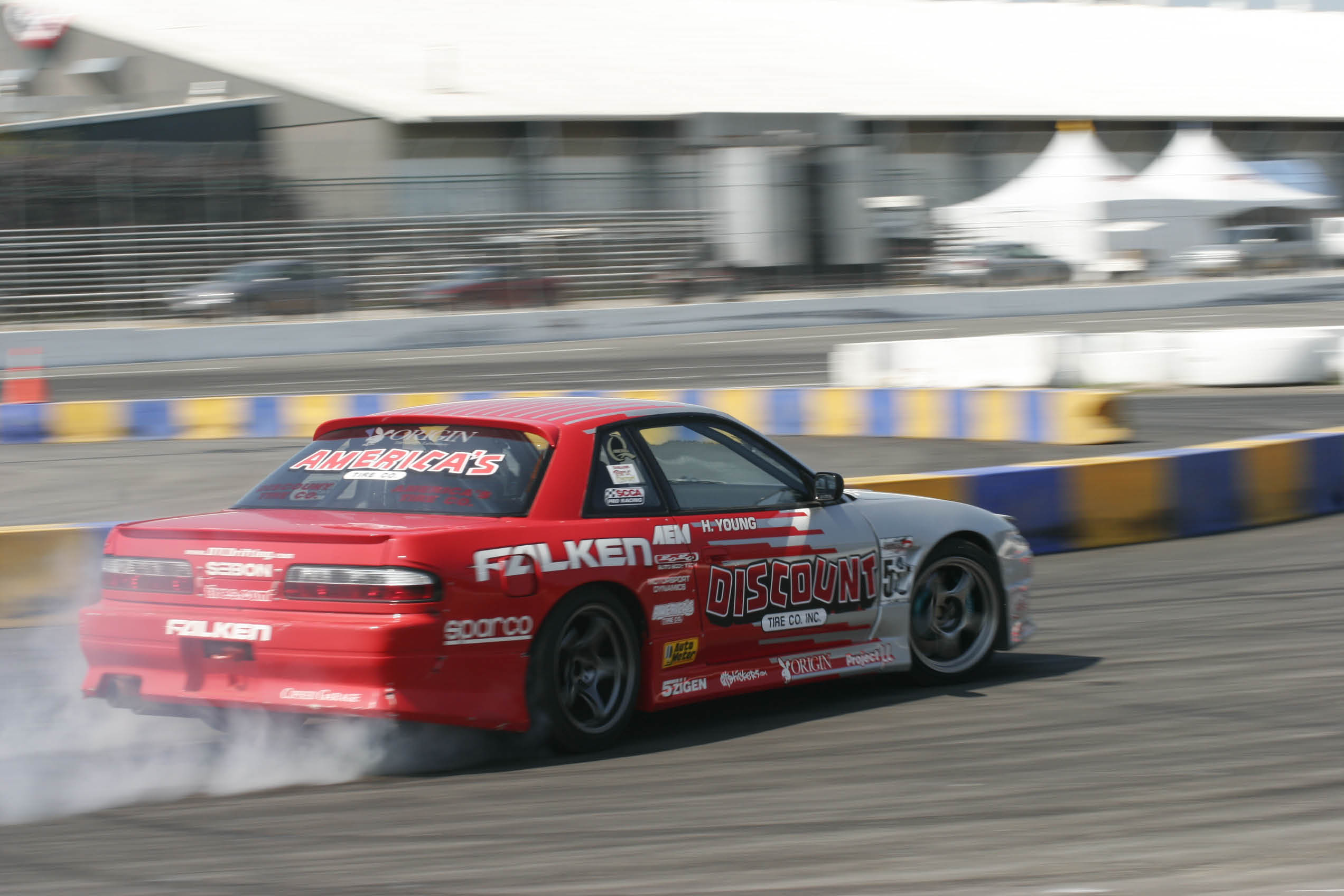 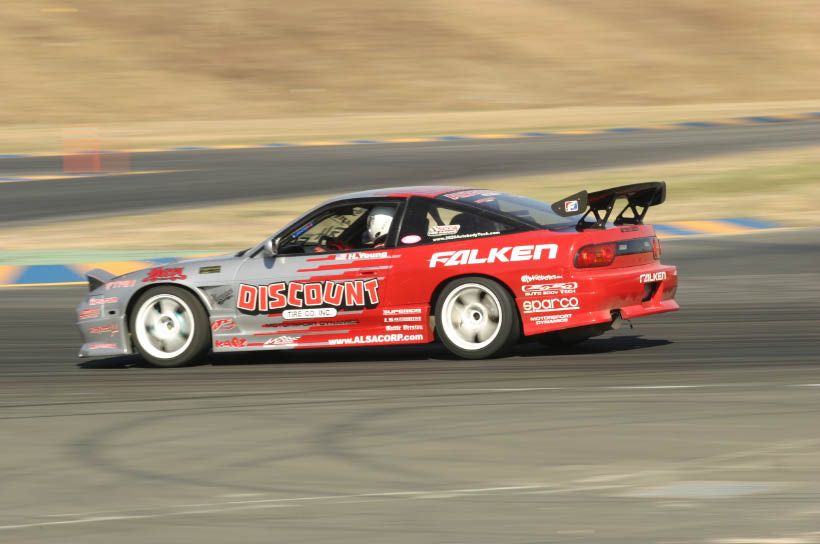 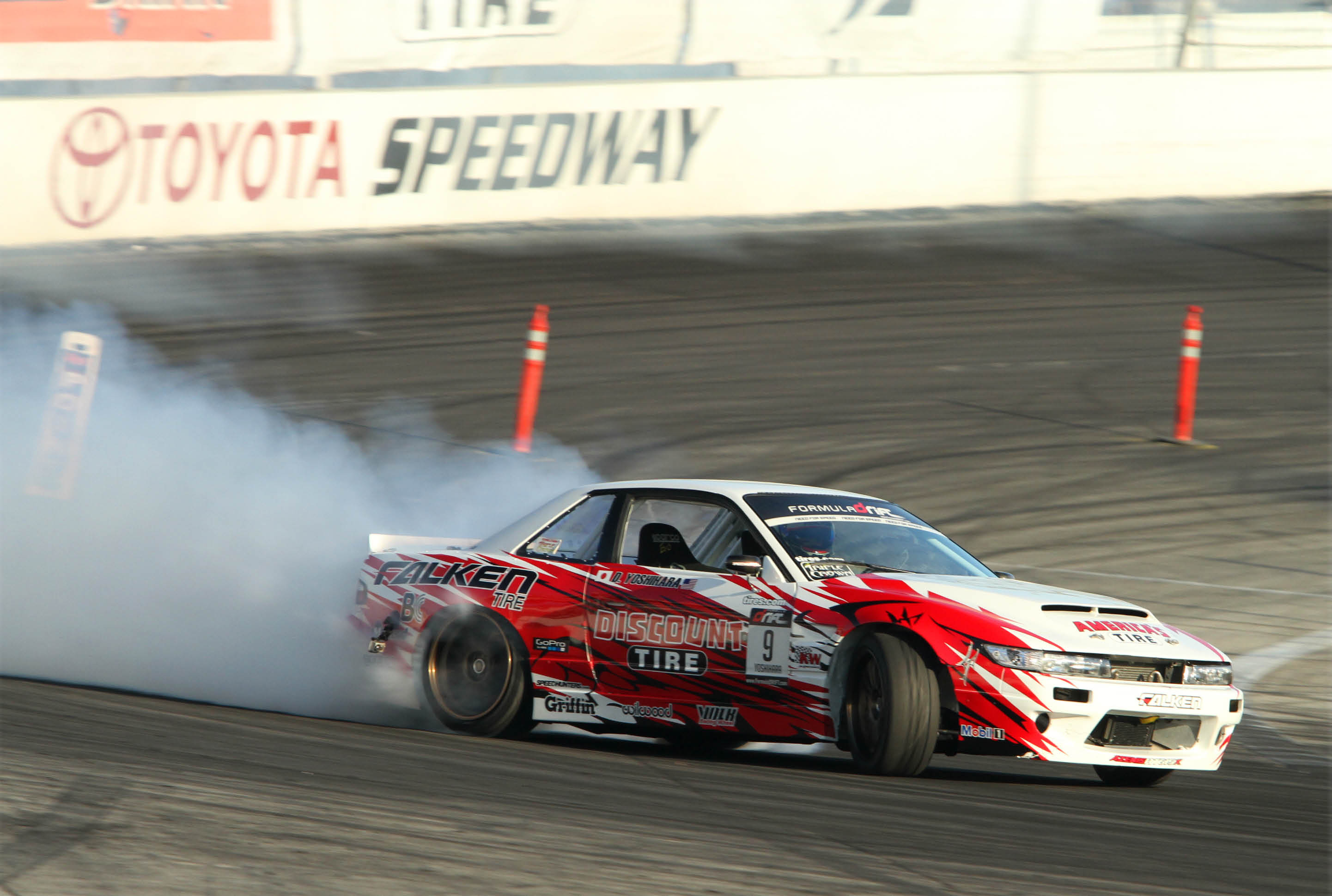