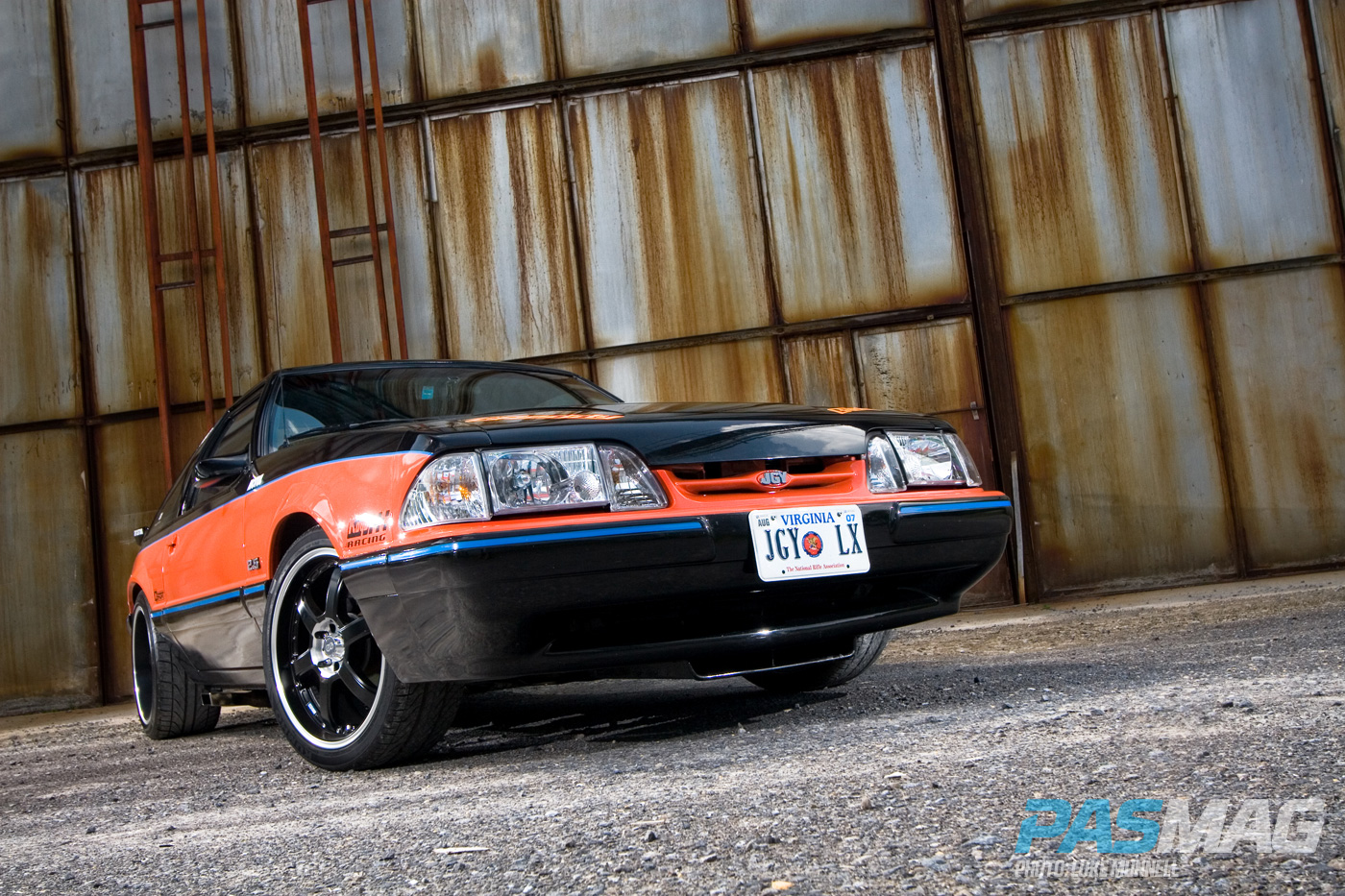 For several years, I’ve heard the urban legend about a group of automotive mad scientists capable of injecting turbocharged Nissan performance into almost any possible platform. The most interesting part about this tall tale is that these guys didn't call the West Coast home (like many would assume), but rather called a remote town in the heart of Virginia home. Having known about the JGY Customs crew for a while now, I’m glad that we’re finally shedding the spotlight on the shop’s crown jewel – an RB-powered 1993 Ford Mustang LX. 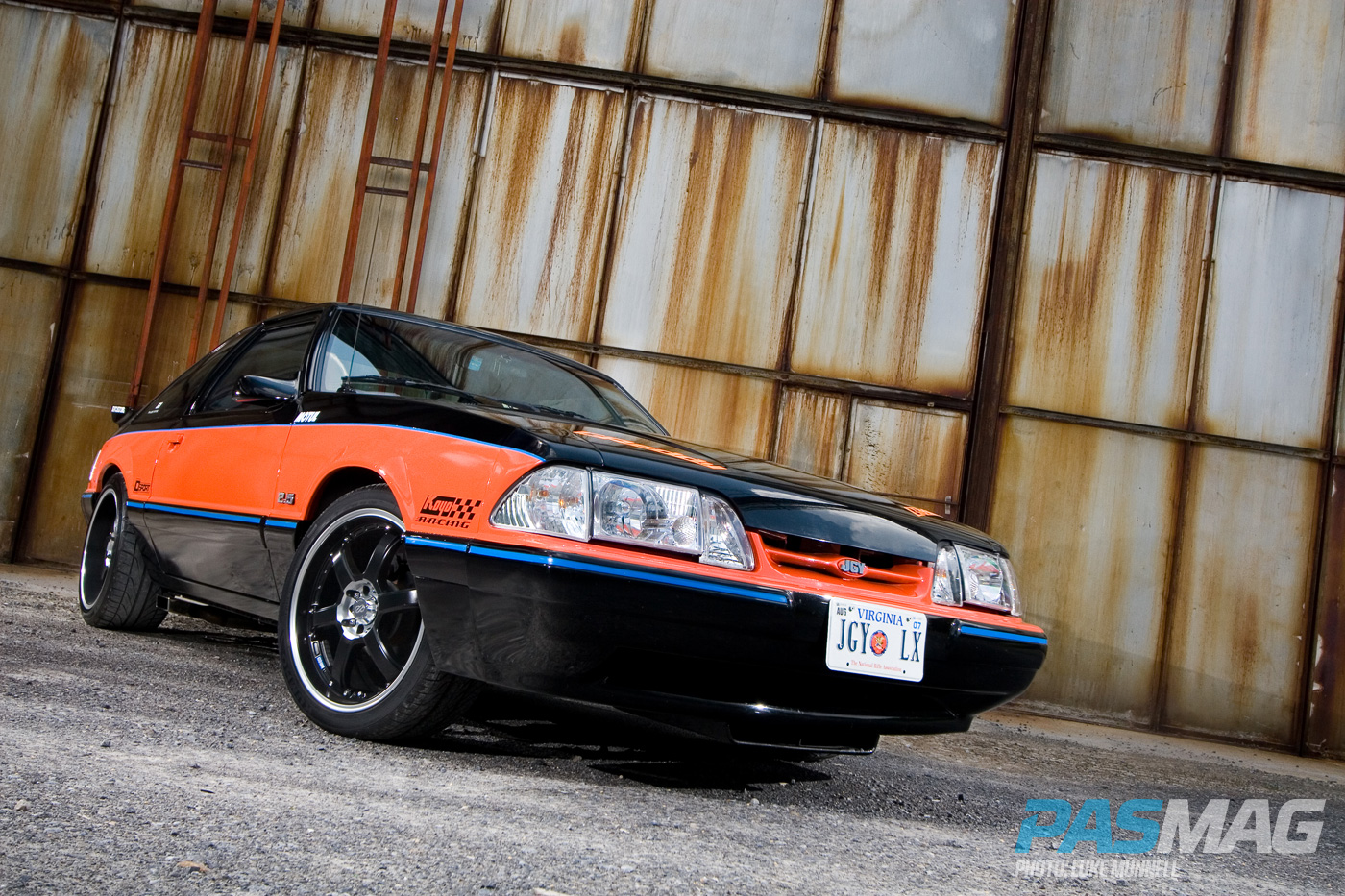 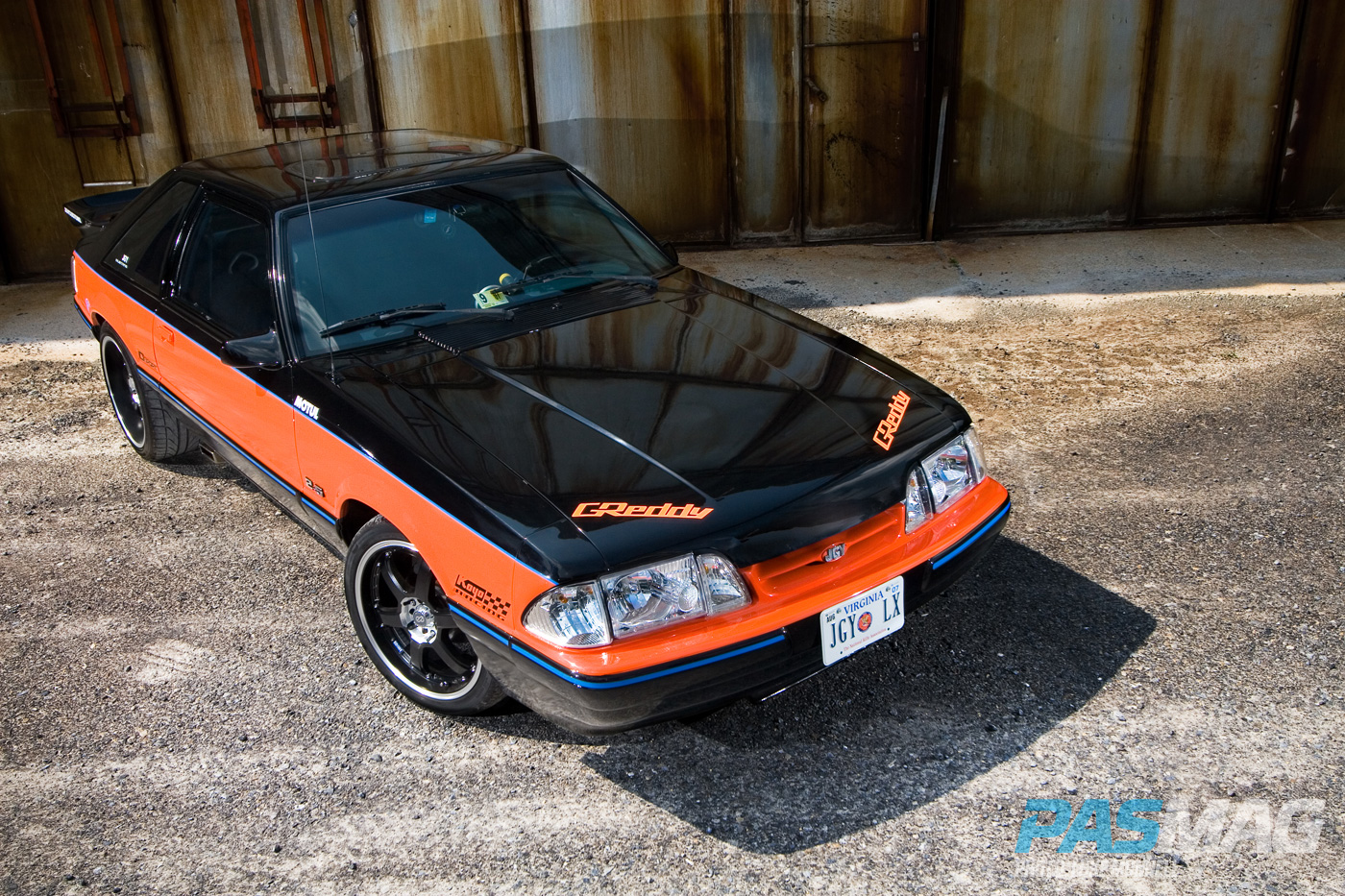 Jason Young, the front man for JGY Customs, has been spearheading the creation of their Nissan-swapped customs for quite some time. Having initially started out as an SR20 / Sentra-based shop, JGY’s expertise has quickly expanded to other Nissan platforms over the past few years. Young is quick to point out the shop’s previous creations like an SR20DET-powered 1980 Datsun 210 and boosted Nissan pick-up truck as precursors to the Mustang.

Built in less than a year, Project Mustank (as JGY calls it) is the shop’s most complicated and famous build-up to date. Motivated by a Nissan RB25 pulled from a scrapped Skyline GT-S, the team carefully shoehorned the 2.5L inline-six motor into the ’Stang’s engine bay. This was no easy task, as JGY fabricated a custom set of motor mounts, driveshaft and made the difficult conversion from hydraulic to cable clutch to make the transplant work. 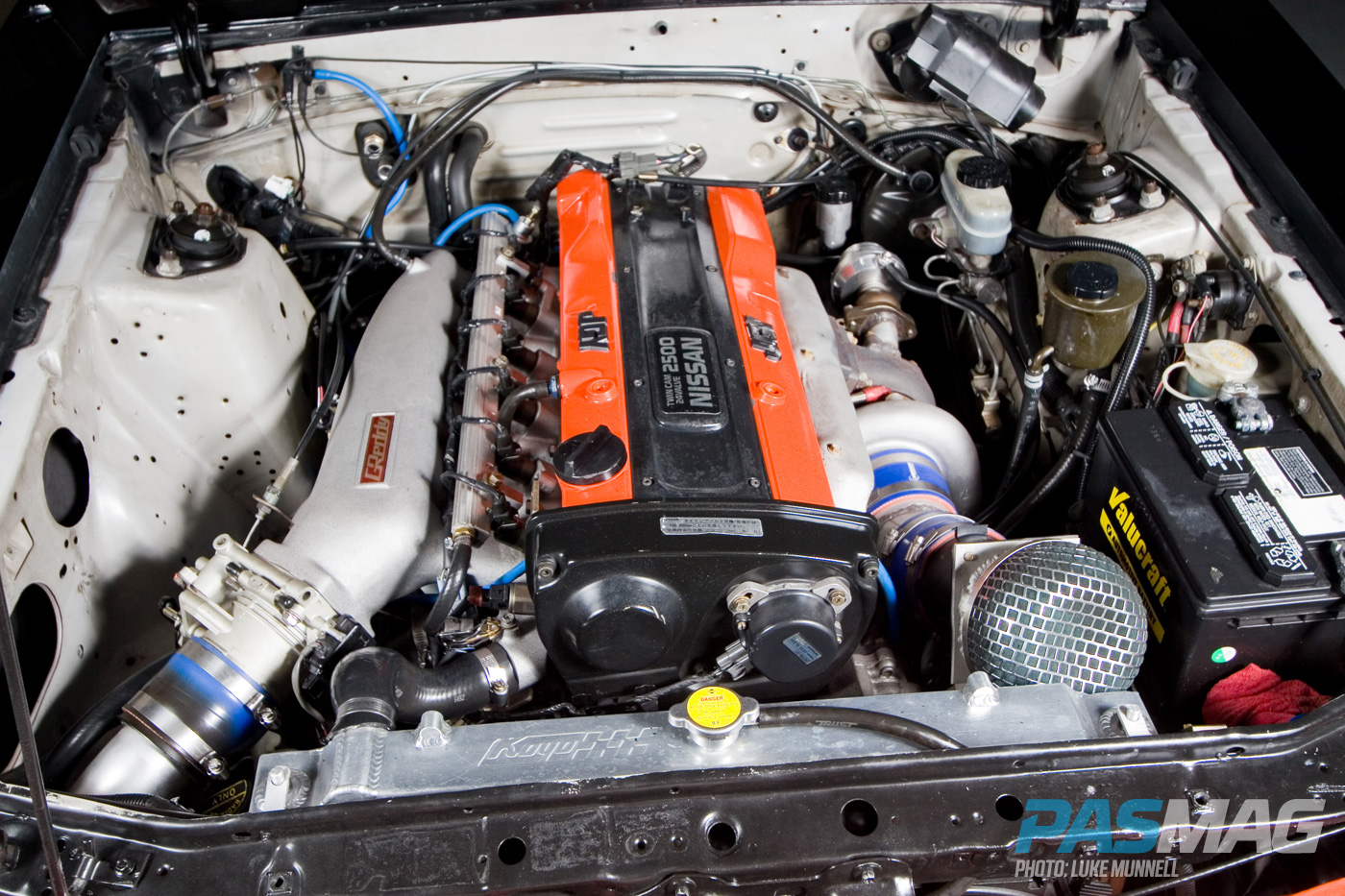 “We wanted to use the Mustank to display JGY’s vast Nissan knowledge,” cites Young. “No matter what car we’re working on, JGY can make it fast using Nissan power.” Speed comes in the form of the heavy artillery fitted under the hood, highlighted by the Precision GT3582R turbo upgrade hanging off the custom exhaust manifold. The breathing process is further aided with the addition of the modified GReddy intake and custom three-inch, side-exit exhaust. The Mustang’s operating temperatures are kept optimal courtesy of the Koyo racing radiator and JGY frontmount intercooler. 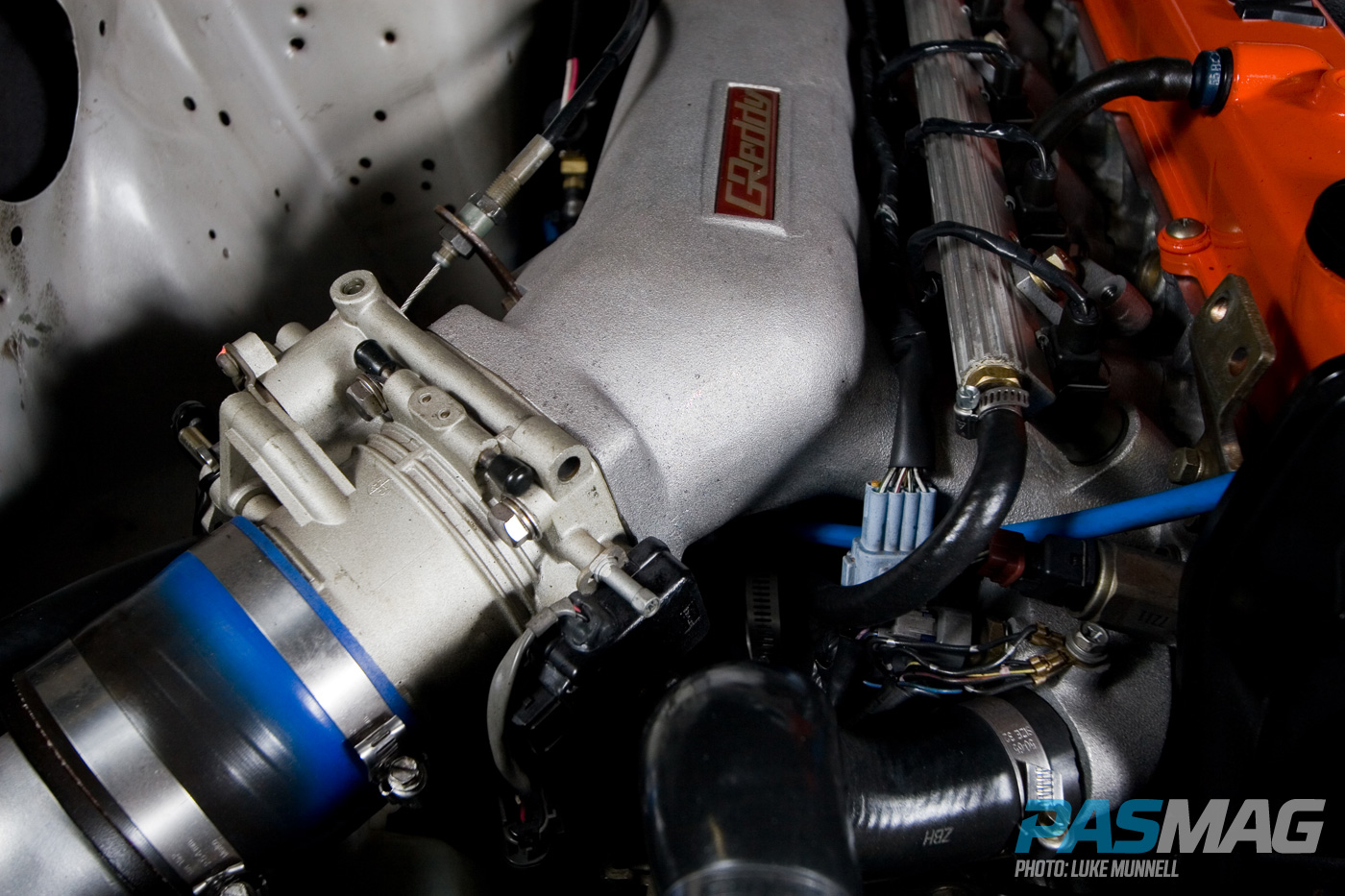 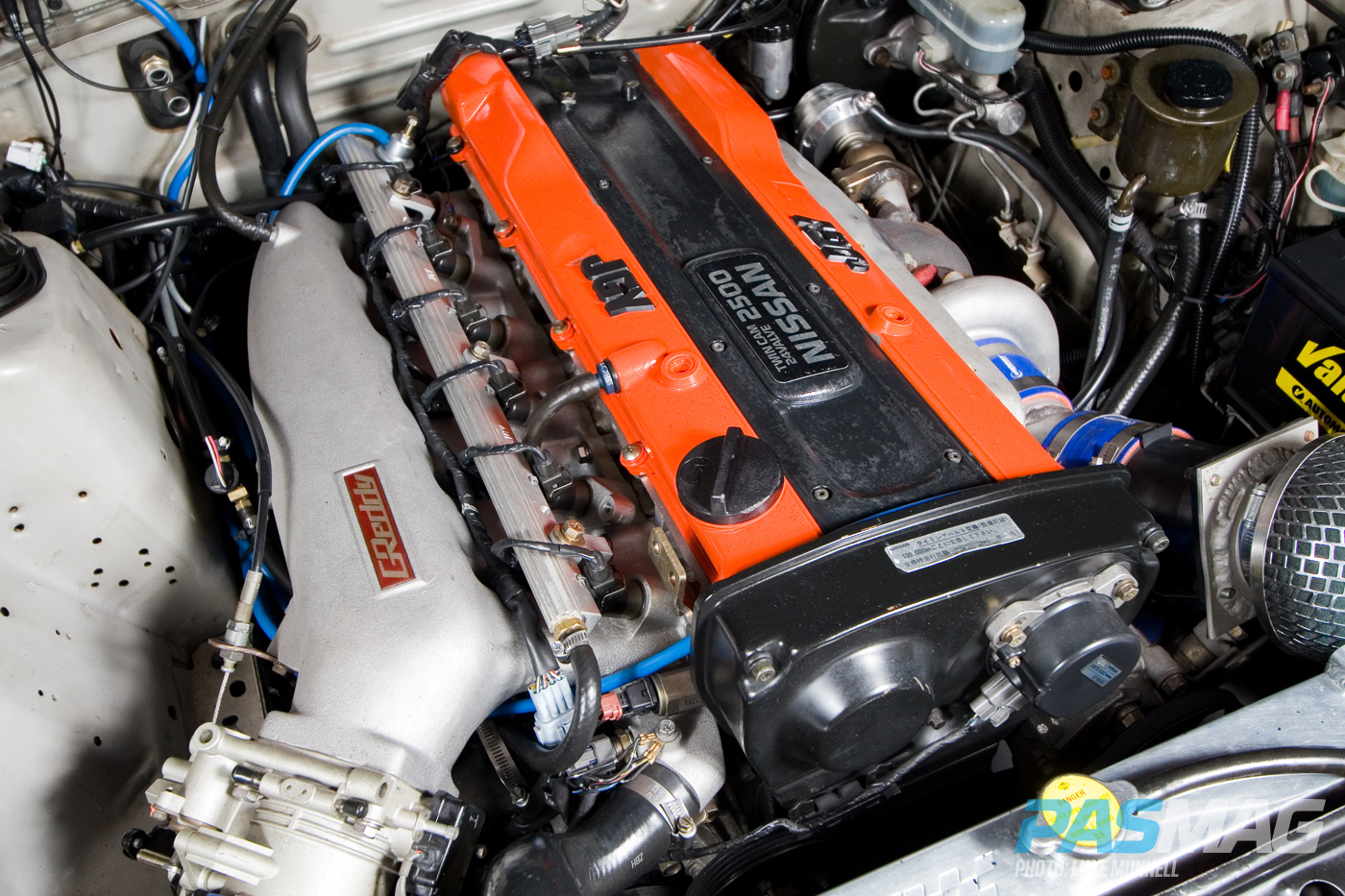 The thirsty setup’s fueling needs are met by JGY’s own fuel rail paired with a Nismo fuel pressure regulator, with a set of MSD 733cc injectors spraying the octane into the cylinders. The crew scored an upgraded MAF off a Ford Lightning and used a Jim Wolf Technology (JWT) custom-tuned ECU to ensure all the components work in harmony. 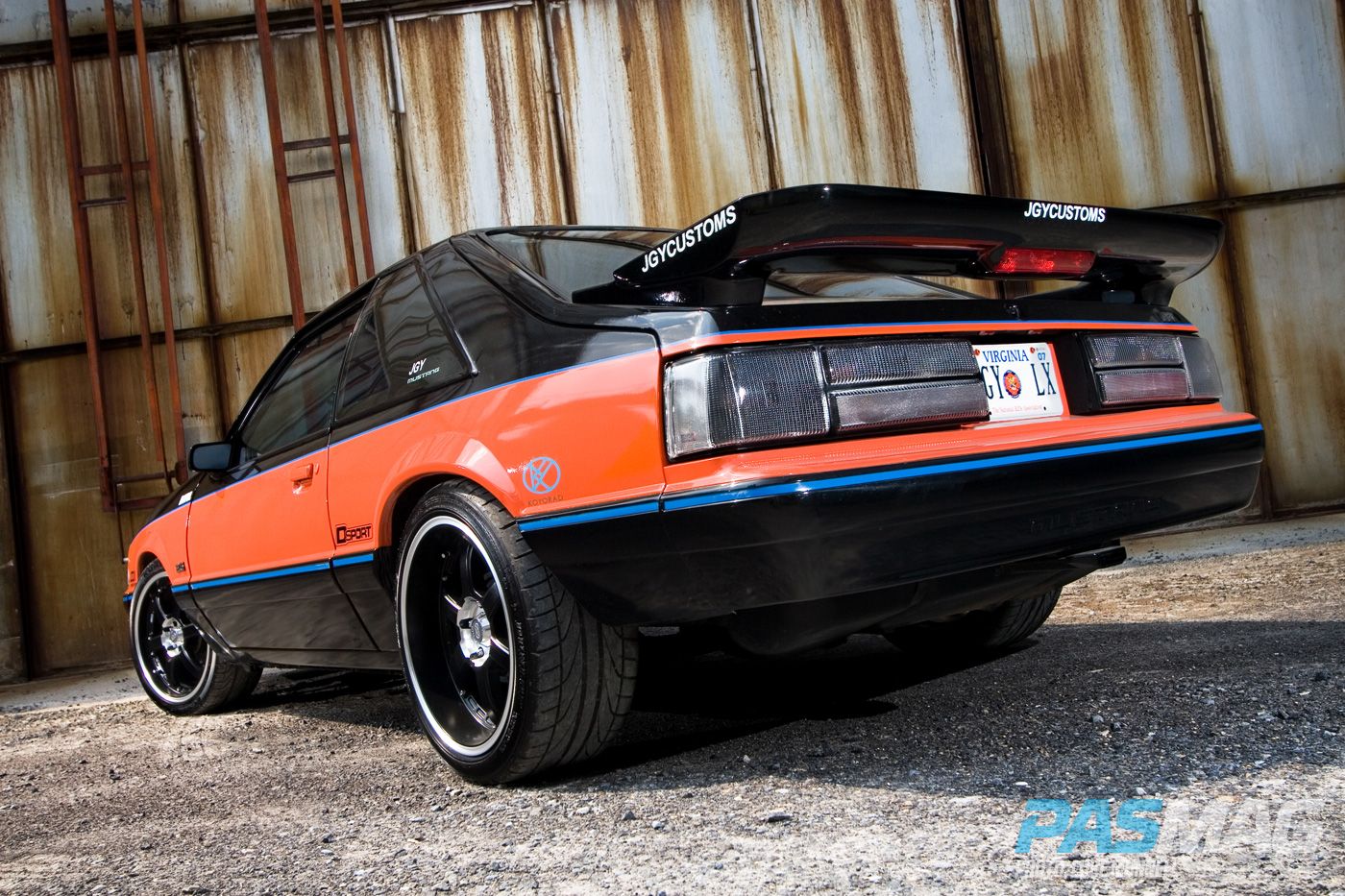 The Mustang’s claimed 560 or so horses and 520ft/lb of torque are sent to the rear wheels via an LSD pulled from a 5.0L Ford Mustang. Making the Mustang easier on the eyes is a custom paint job and graphics. JGY installed a Saleen rear wing to sit atop the trunk, while the front and rear ends received new headlight and taillight assemblies. 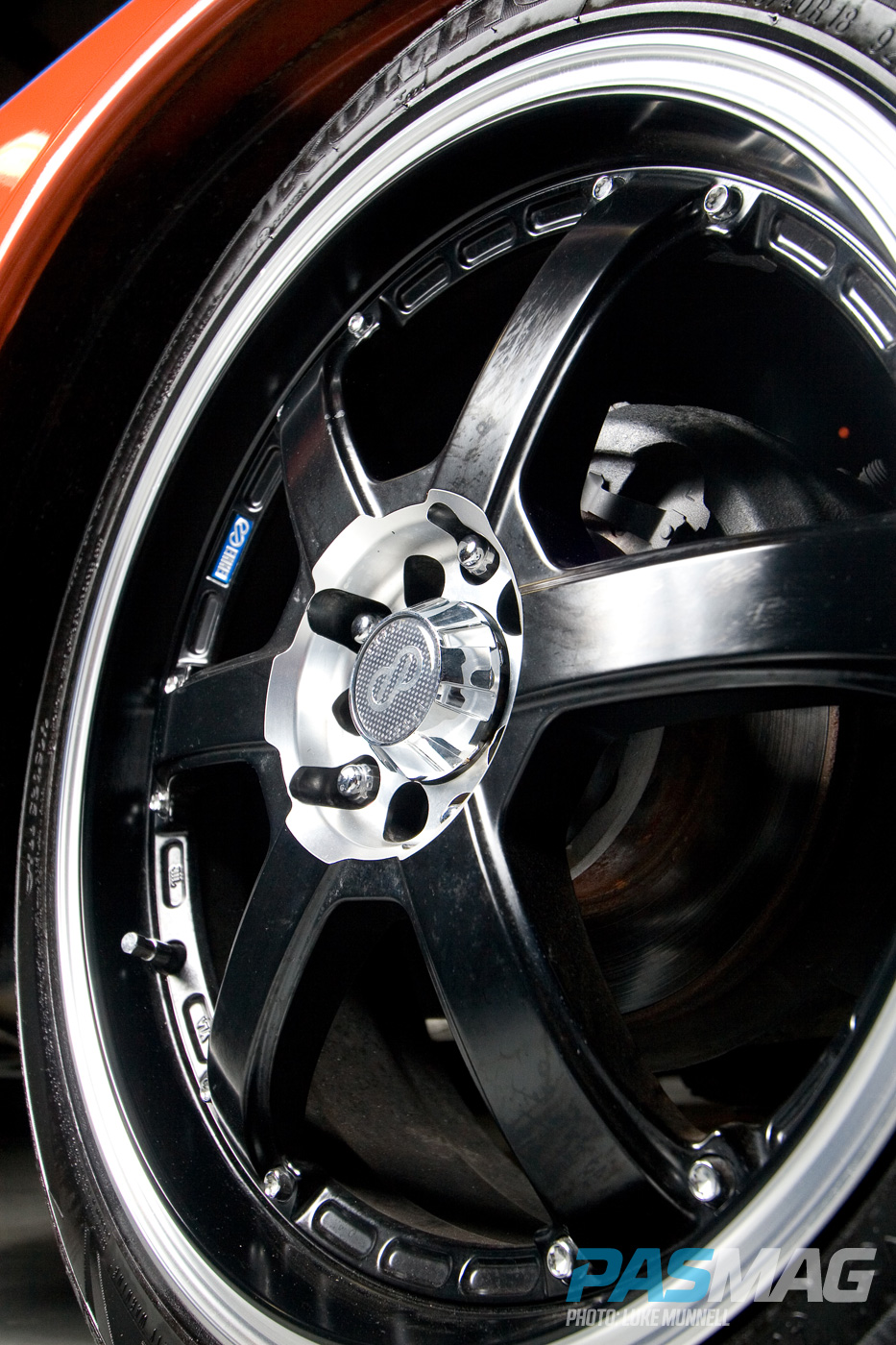 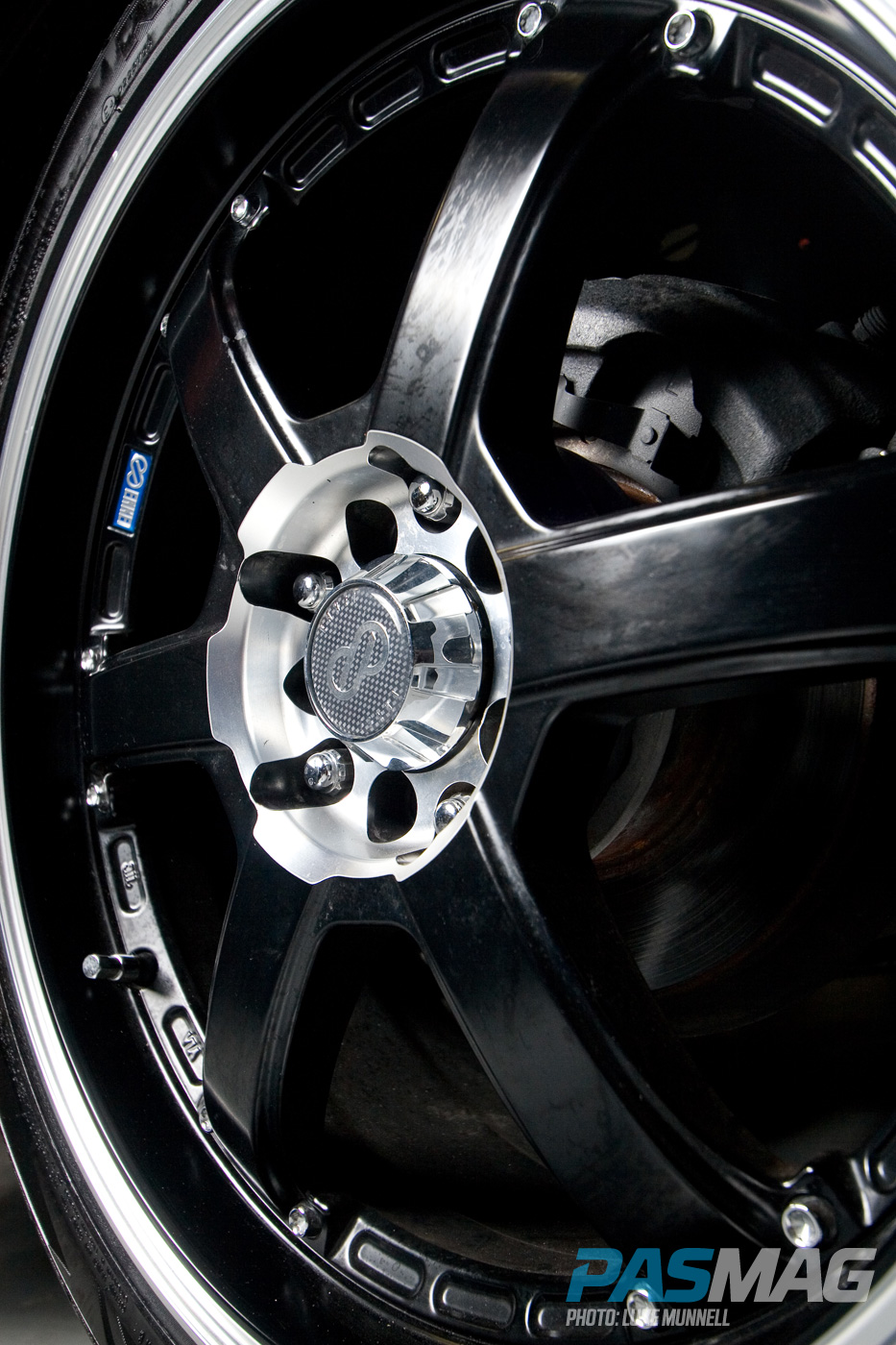 The Mustang sits on a set of black 18-inch Enkei PKR wheels that measure 7.5 inches wide up front and 9.5 inches in the rear. Currently, the car uses a mixed tire setup, with a pair of Kumho Ecsta ASXs up front and Dunlop Direzzas out back, most likely a result of too many burnouts. 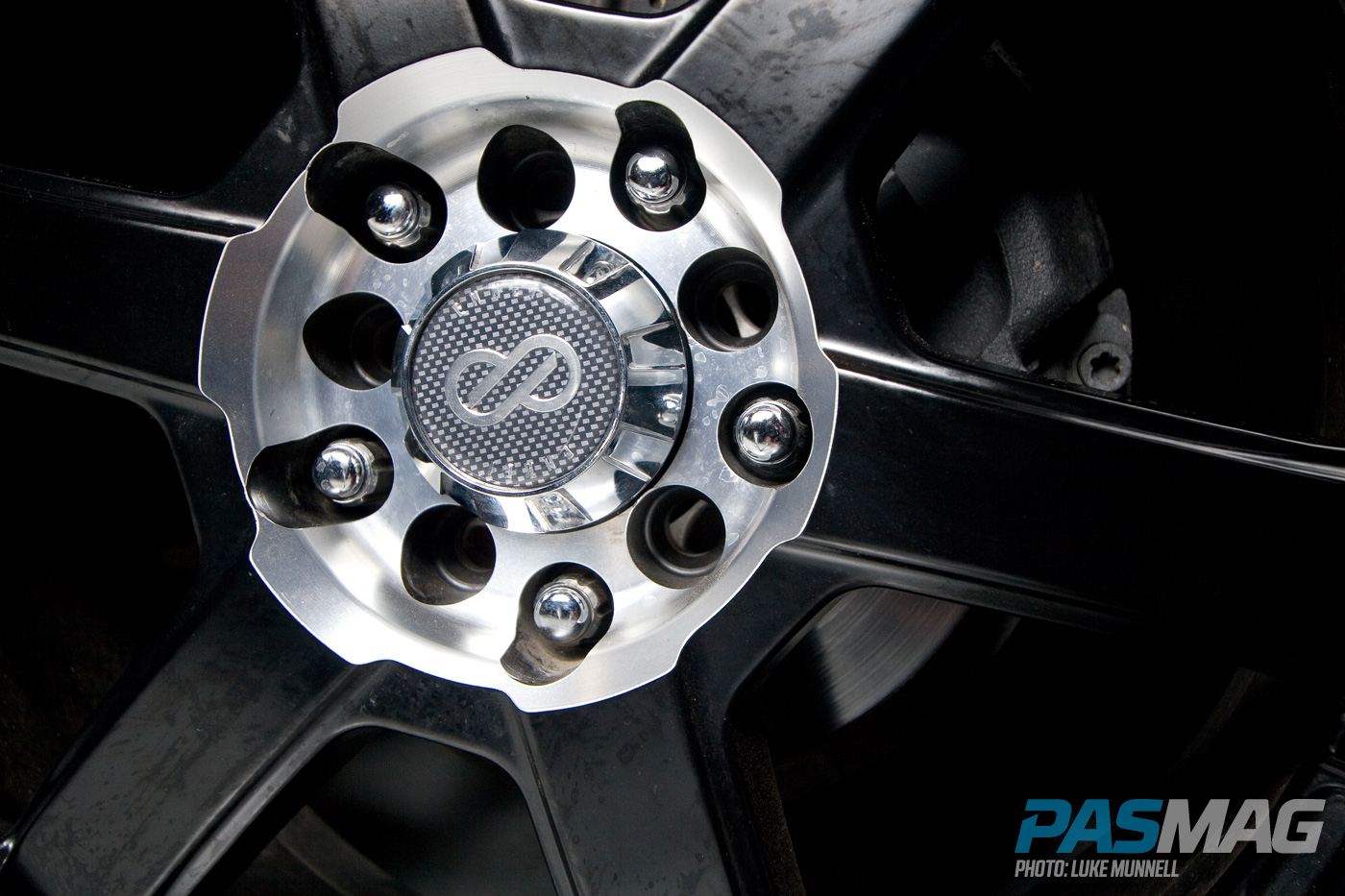 Lowered by one inch at all four corners, the car’s suspension features a number of custom components like relocated sway bars and reinforcement bars to accommodate the engine swap. 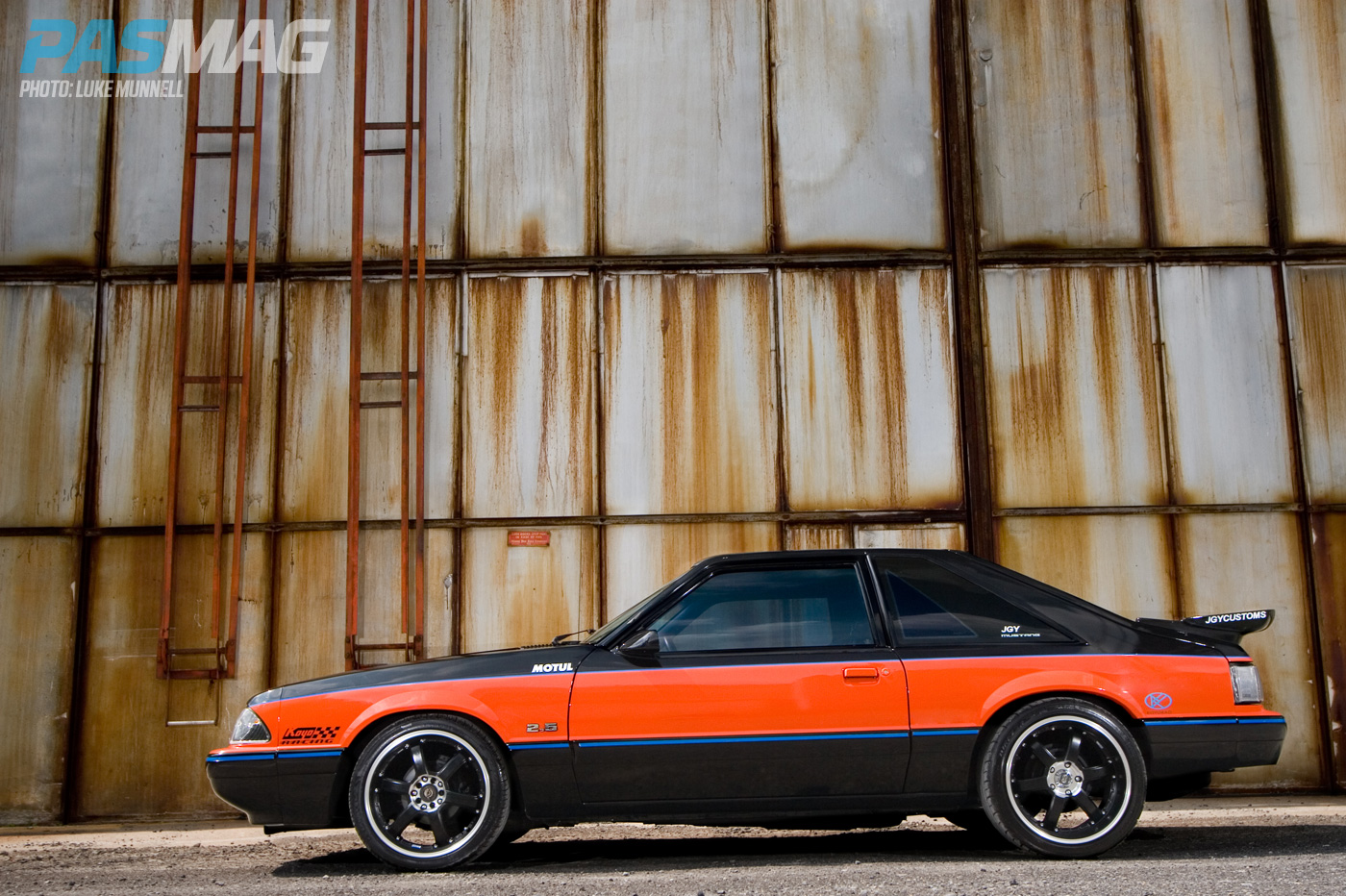 Completed in less than a year, the JGY Mustank made quite a debut at the 2006 NOPI Nationals by taking home the top prize for Best Engine Swap. With $15,000 and countless man-hours poured into the project, you can bet that the crew couldn't be any happier with the investment. It took us many months and numerous failed attempts in scheduling the photoshoot in the shop’s town of Atkins, VA, but we couldn't be any more excited about finally getting this truly unique ride in the pages of PAS. 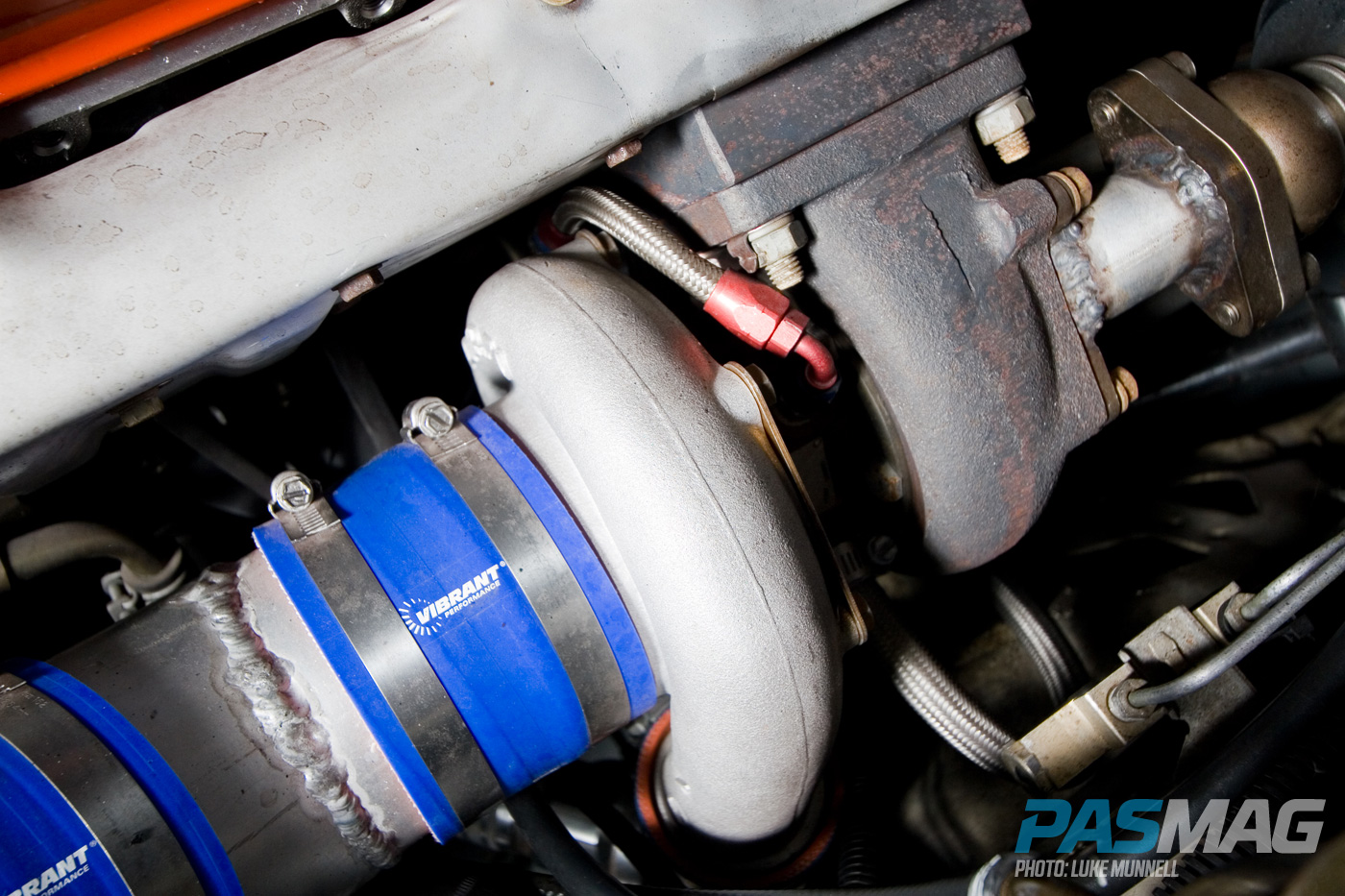 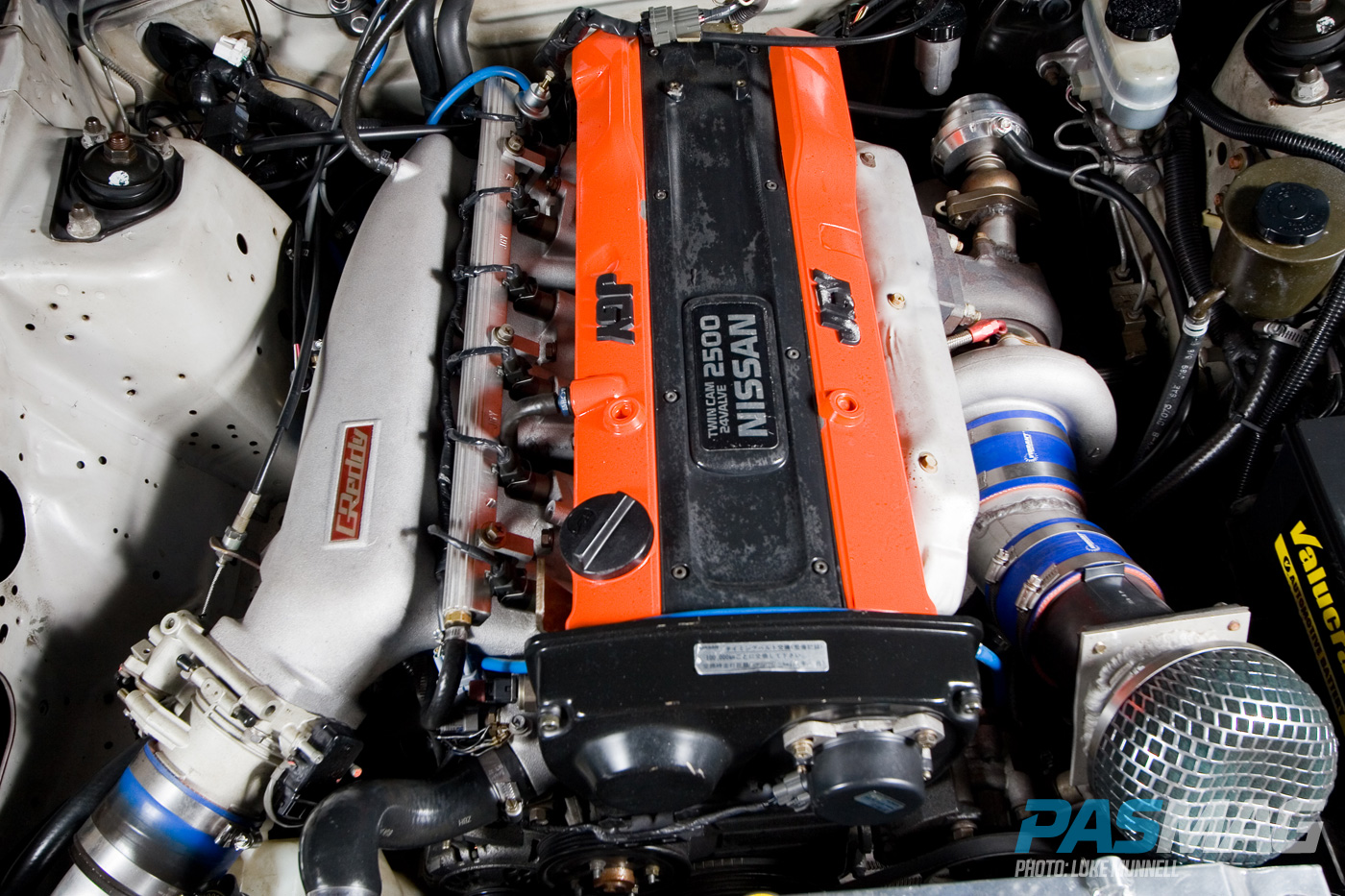 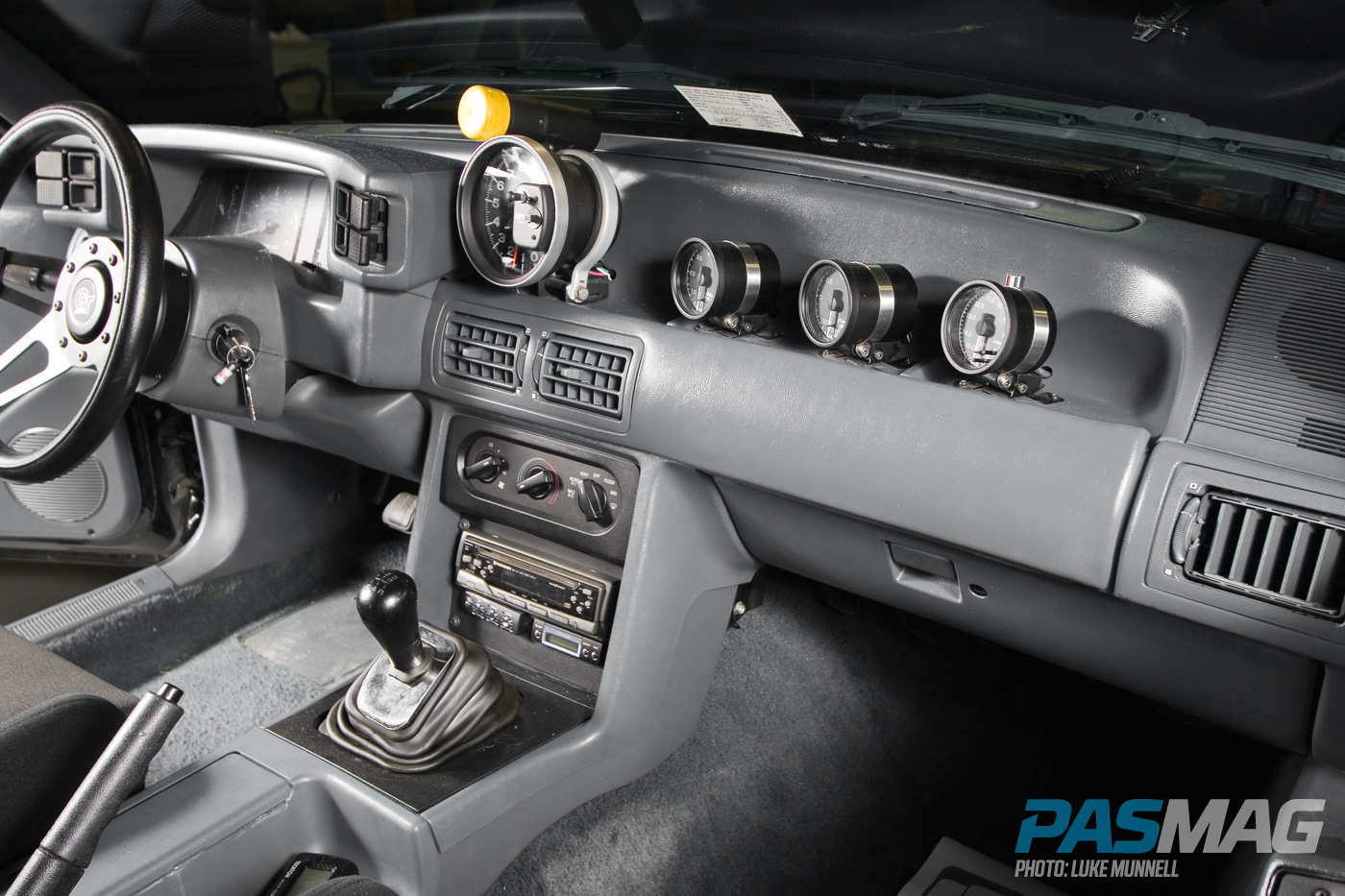 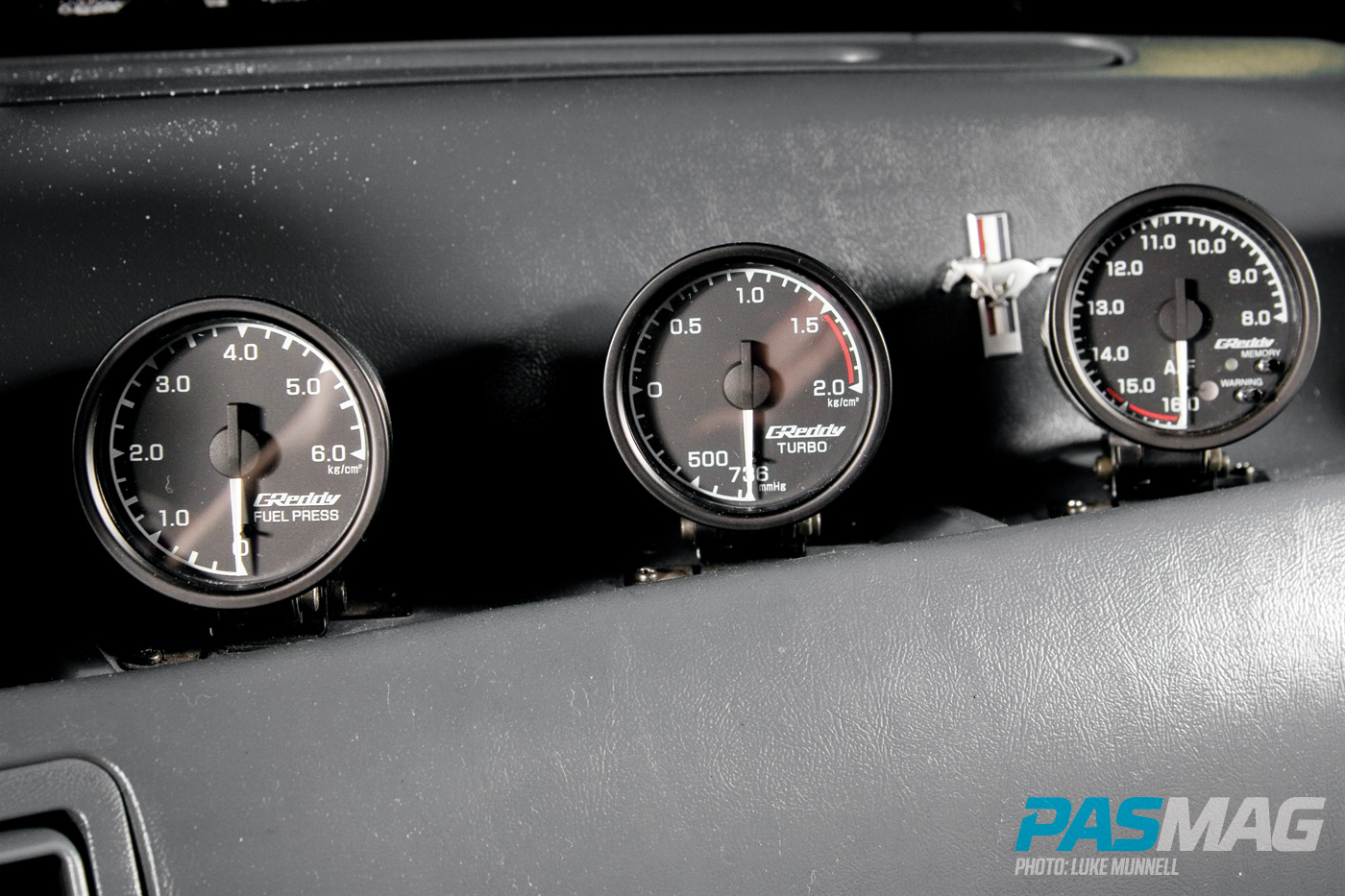 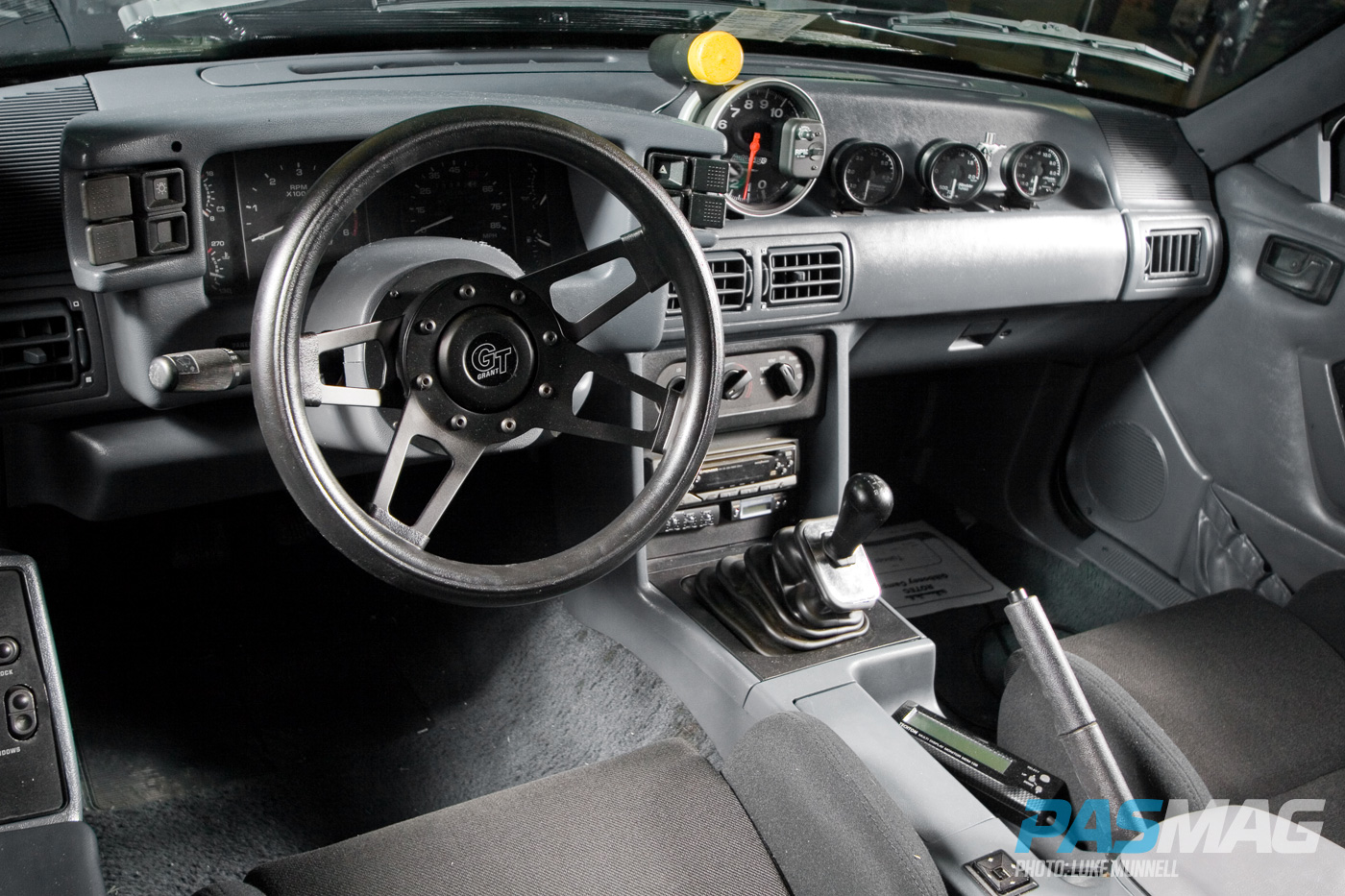 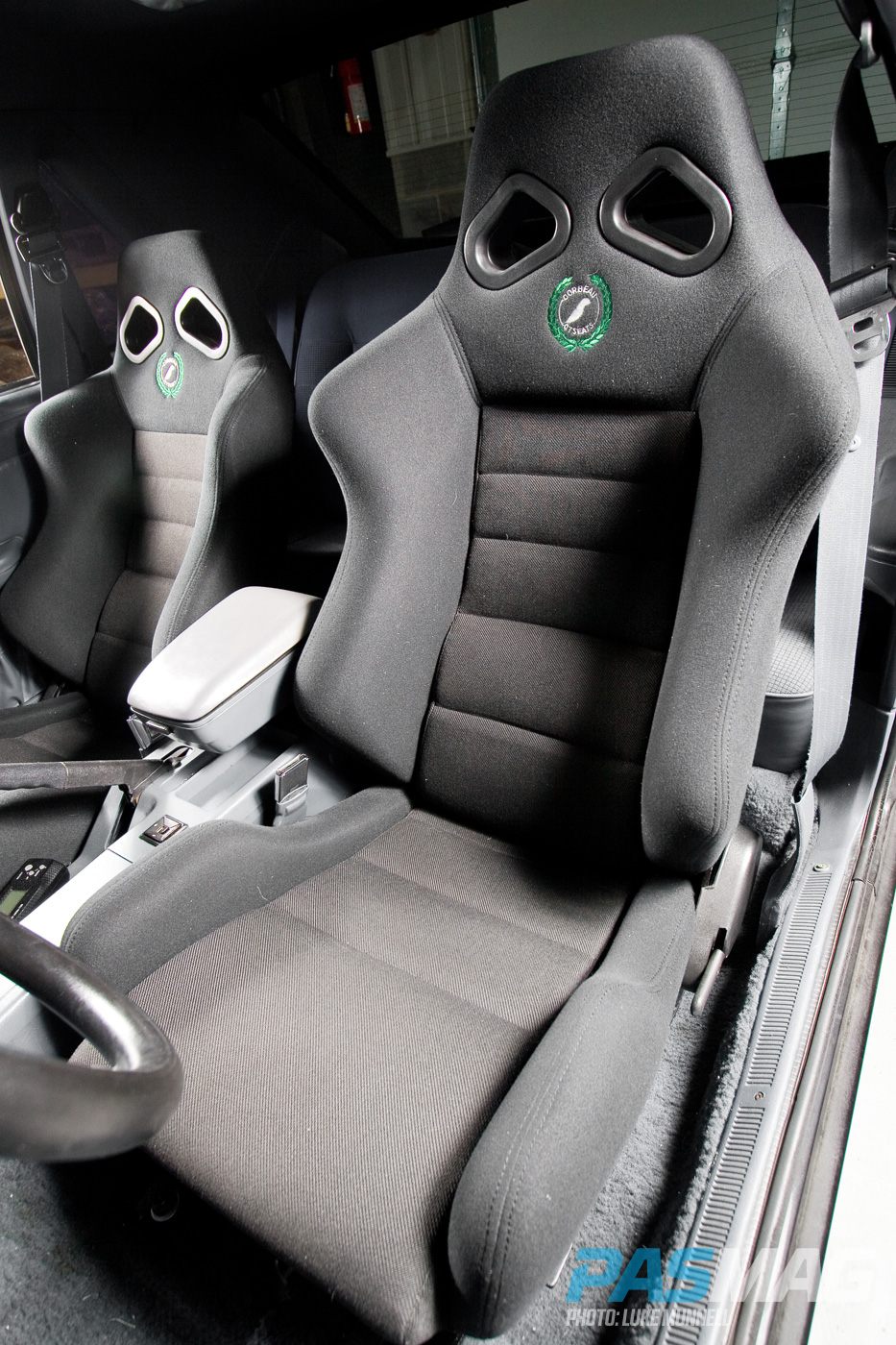 Stepping Back: Ken Gushi's 2002 Lexus IS300
How Ken Gushi found a balance between everyday practicality and purpose-built competition cars with his IS300. There’s a good chance that most of our...

PASMAG Garage: Jim Goritsas of RbPower Garage
RbPower Garage in Bradenton, Florida not only specializes in all-things RB-powered and Nissan, they also provide services from air-ride and fender...

Toyo Tires Treadpass 3D: Luigi Arroyo's 2018 Honda Civic Type R
Luigi Arroyo is no stranger to us and our readers. In our very first Tuner Battlegrounds Championship, Arroyo's 2008 Honda S2000 was one of...

PASMAG #166 (Tuner Handbook + Style)
Welcome back to the pages, PASMAG fans. We hope you're enjoying the summer months as much as we are over here! We know a lot of you spent many months...