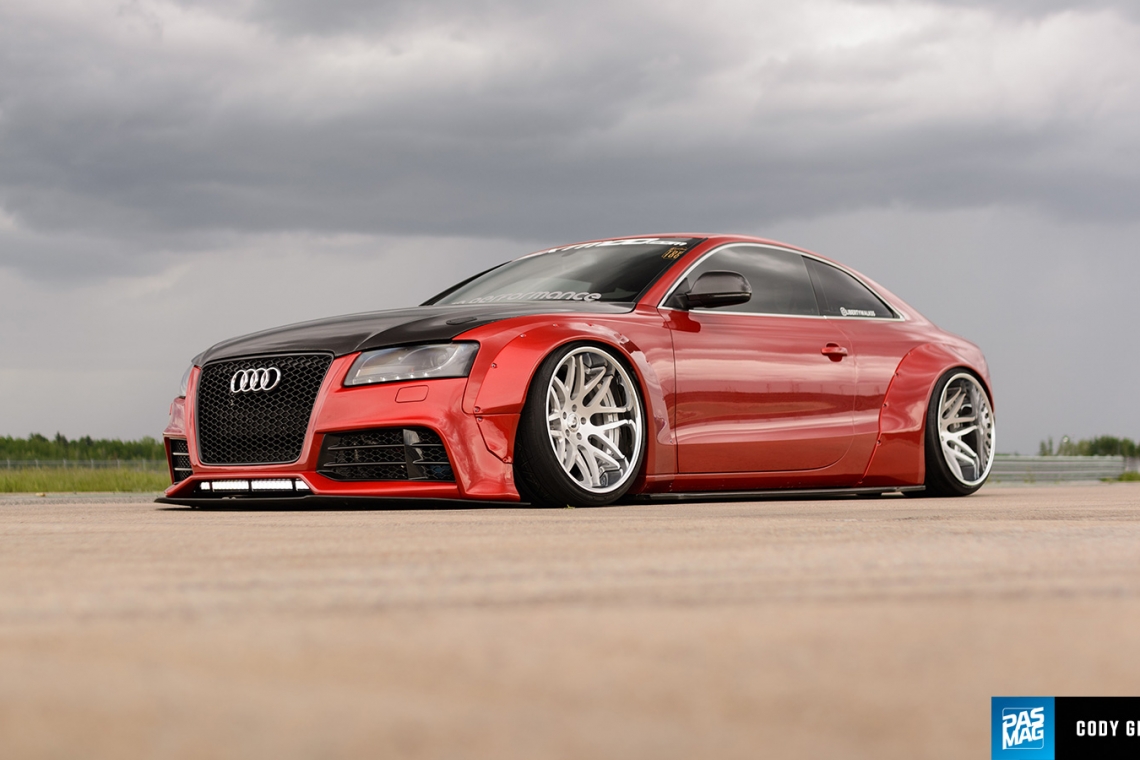 An S5 That's Cursed in the Best Way Possible.

In this world of car modification that we live in, there’s a collection of words that are the bane of every car enthusiast, and they always appear once a new car comes into their lives. You know exactly what I’m talking about: “Yeah, I just bought this car as a daily and…” you probably know what the next few words are. “… I’m only going to do _____ to it.” That blank could be tint, wheels and tires, even suspension, or a combination, but no matter what they say they’re “only” going to do, you already know that they’re super, super wrong.

I always enjoy catching up with these people months later, only to find that they’ve already gone past what they originally vowed, and they always say the same thing; “Yeah, well, you know how it is.” Oh yeah. We all do. 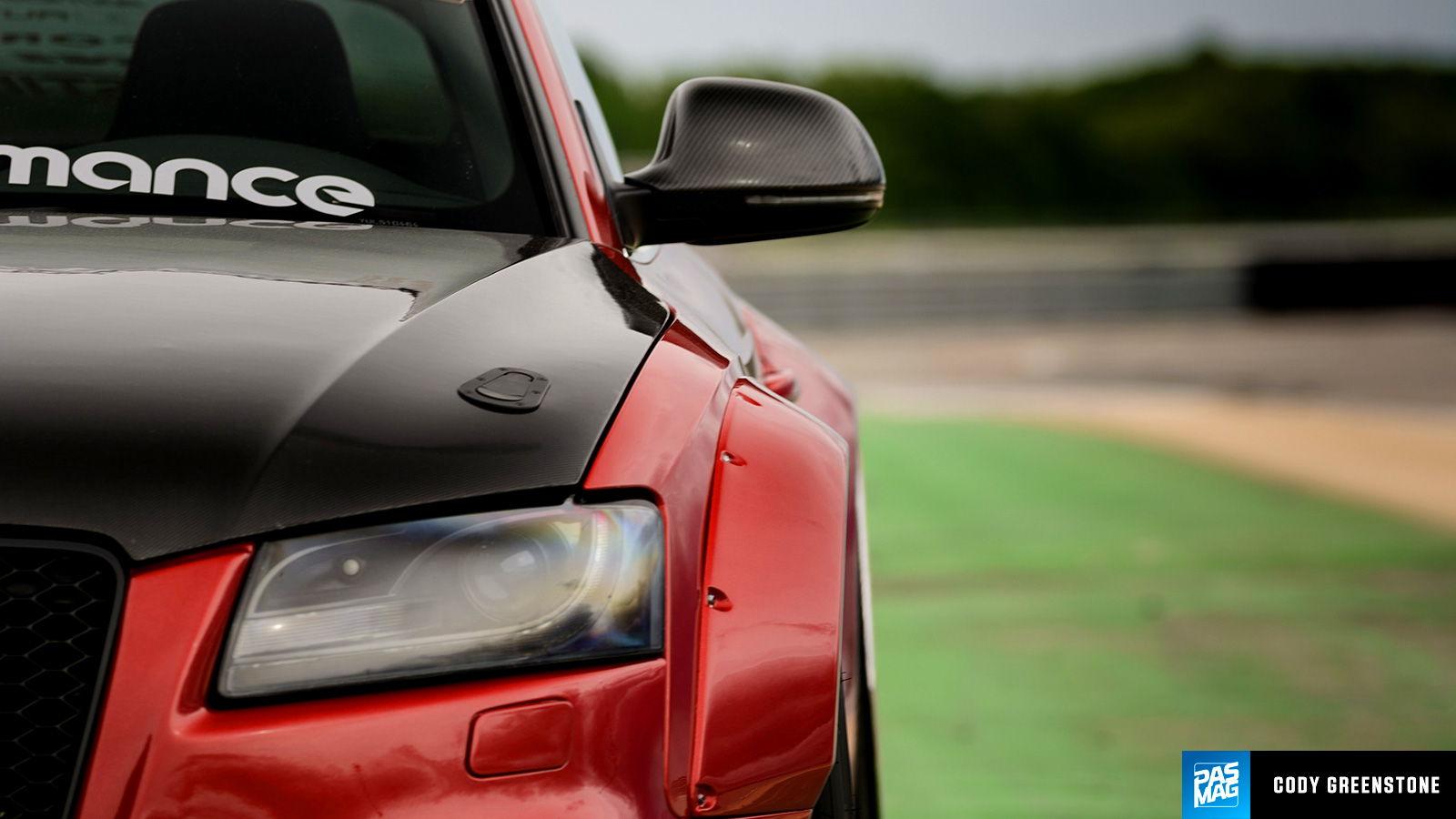 Such is the car enthusiast curse, and one of our more favorite people to fall under its spell is Andrew Hoffman. Some may not know, but before his current car, Hoffman was whipping a Dodge Challenger with the unique SMS conversion and a supercharged V6, which he says, “whooped big blocks’ butts.” When it came time to move from that road-burner to a classy daily, Hoffman set his sights on an Audi S5, and then immediately screwed himself over by saying those magic words.

“I wanted to get out of the modification car show lifestyle,” he lies. “I had just sold my challenger at the time that I dumped all kinds of money into in modifications, and I had told myself it was enough - that I would only buy wheels, an exhaust and tints for the Audi.” 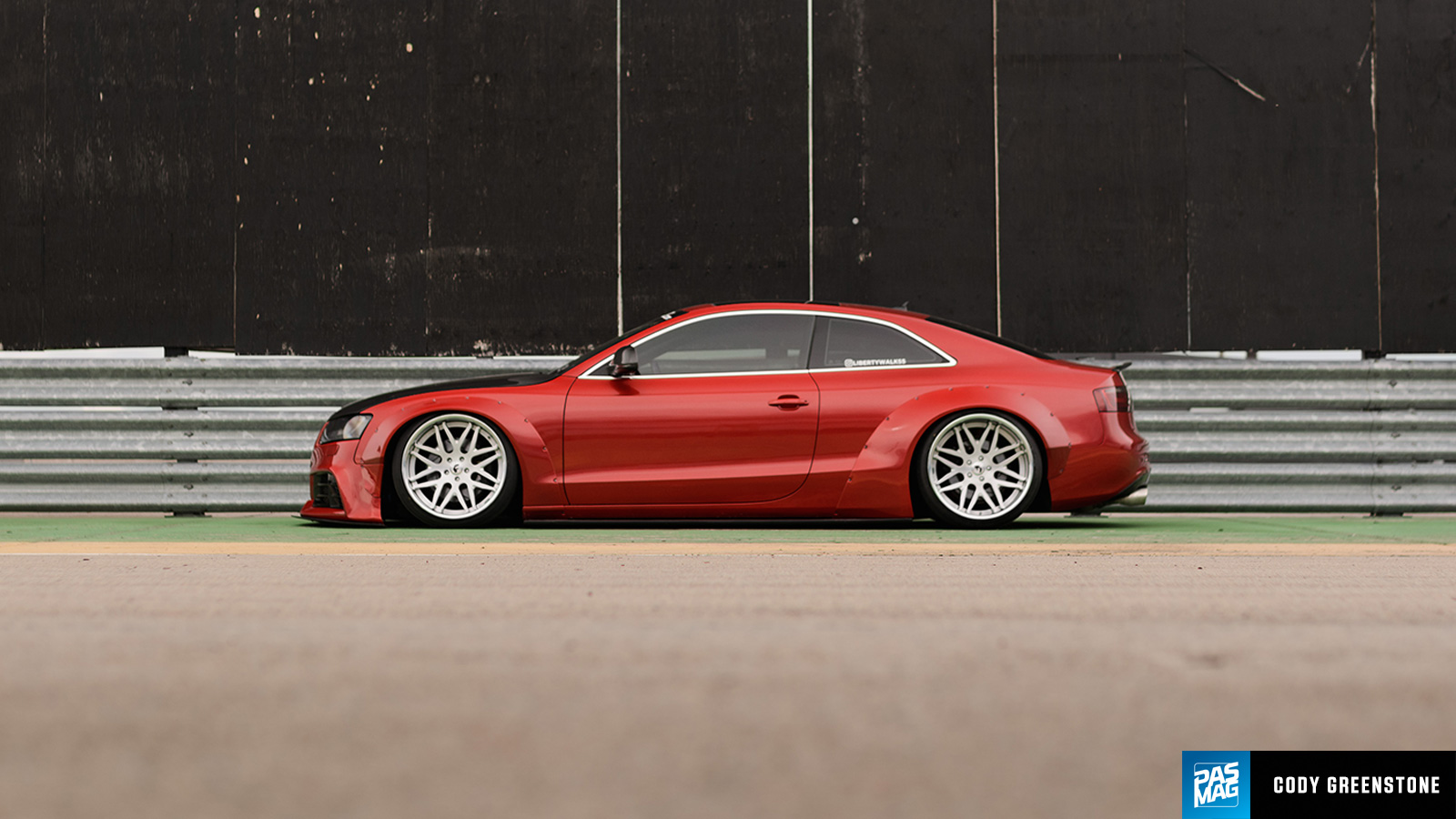 Of course, as soon as he parked it in his driveway for the first time, the modification gears started turning, and thus began the many different variations of Hoffman's S5. He stayed true to his word of an exhaust and tints, but the first iteration also included an Airlift Performance air suspension system, dark grey matte wrap, and custom red powder-coated Avant Garde M590 wheels. Next came a light blue wrap, a Reiger RS5 front bumper, and another set of AGs – this time the M540 mesh wheels. Then dark blue Autodip, a Liberty Walk widebody kit, and Work two-piece T7Rs; this look was later updated with purple Autodip and the addition of a custom chassis-mount wing. So, yeah, totally just tints, exhaust, and wheels.

The car we’re here to talk about today though is the latest version of Hoffman's vision for his S5; his lady in red. That shade is “Monza Red” to be exact, and isn’t paint or a wrap; it’s actually Autodip, which Hoffman describes as spray-installed vinyl, and his favorite modification.

“The depth of color, the metallic pearl in it, and the high-gloss finish are absolutely insane,” he lists off. “My favorite part of it is the self-heal clear coat. I think I scratch my car about 300 times in a weekend at shows to show that with a little friction and heat afterwards the scratch goes away!” 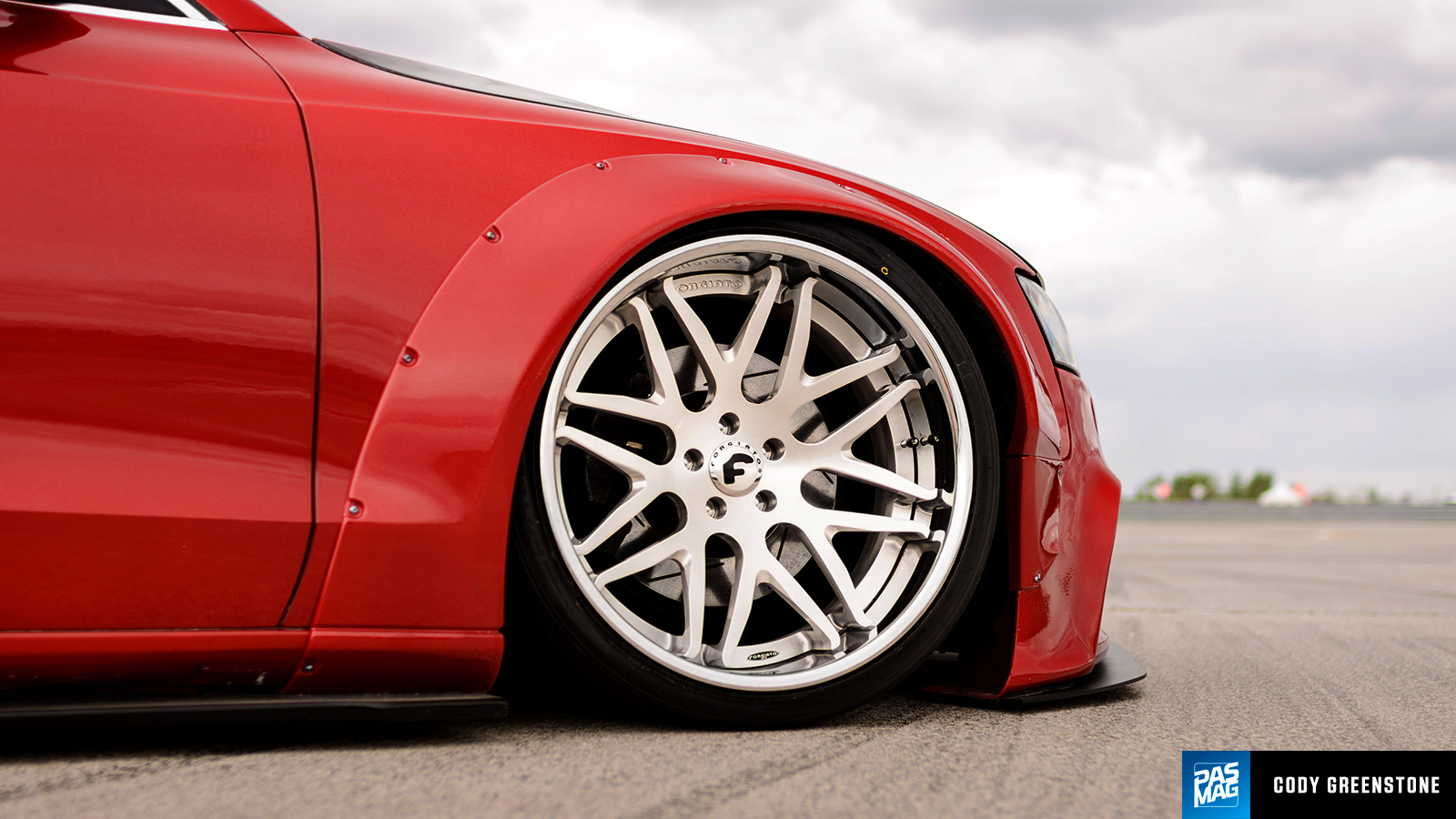 The other aspect that’s ever-changing on the Audi is the wheels, and this time around the choice was a little more bougie, with a set of Forgiato Kato ECLs in 20x9.5 in the front, and 20x12 out back. Snagging a set of these concave, three-piece Forgiatos was something that Hoffman says he couldn’t have done without the help of Plaza Performance, who had Forgiato themselves involved in the process, and supplied Hoffman with images of the wheels being built, step by step. Now that’s customer service.

Another shop that’s listed as instrumental in this build is DSG Performance. DSG helped source the Liberty Walk kit from Japan for the S5, almost immediately after it hit the market last year. Normally people are a little apprehensive about cutting into their cars, but Hoffman jumped right in and be that “crazy son of a bitch” (his words, not mine) to take his car to the next level – effectively nailing the coffin shut on “I’m just going to do _____.” 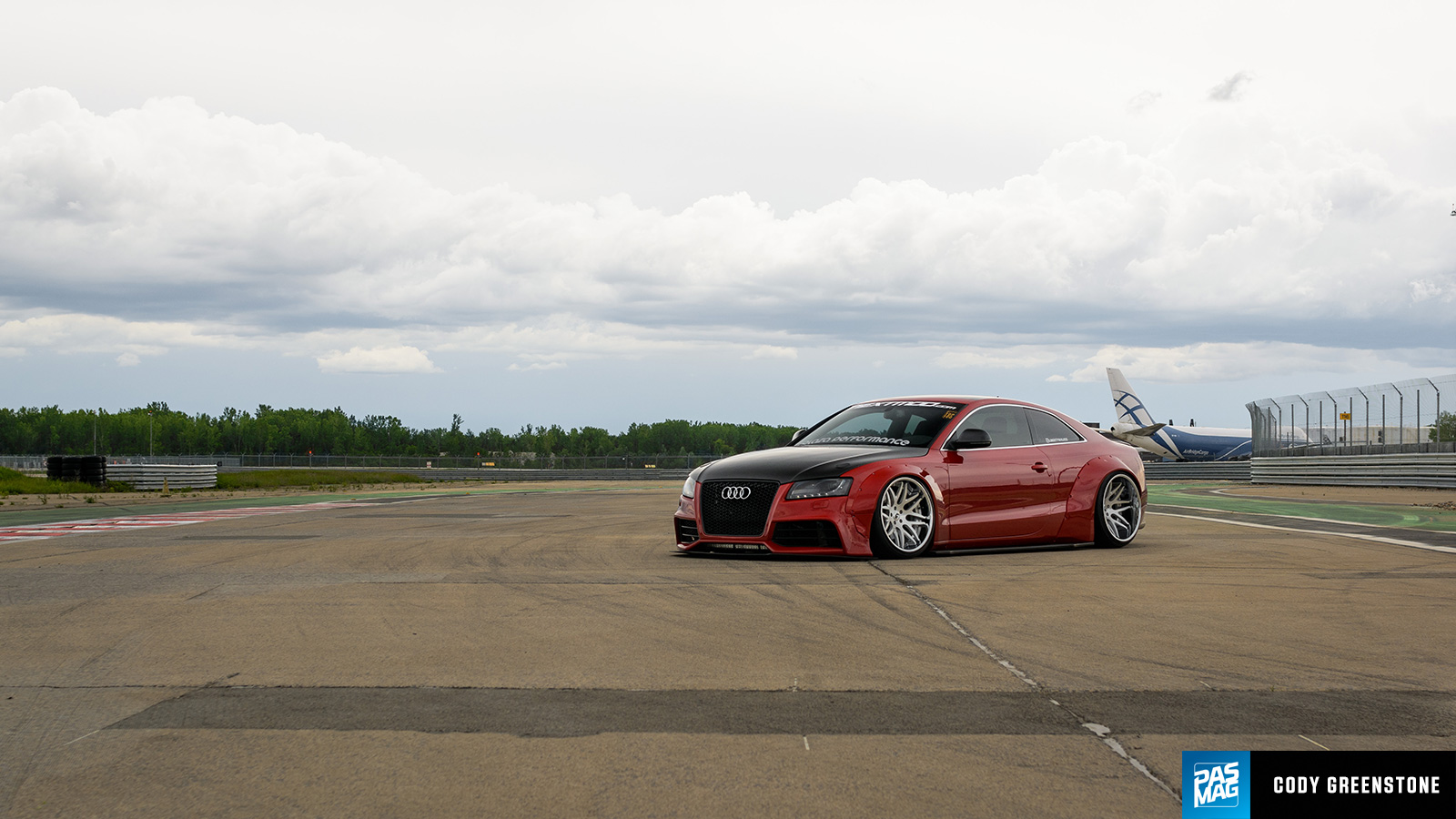 The effect of the Liberty Walk kit paired with the Reiger RS5 bumper is a powerful one, which is further accented with a XenonZUK carbon fiber ducktail spoiler, MT Custom Lights RGB demon eye headlights with blacked-out housings, and a full Car Lighting District LED conversion. There’s even a hidden light bar, right underneath the RS5 grille. Standing still at a show, or rolling down the highway, fully-lit, this S5 is an event to take in.

She’s not just all looks either, she’s got the heart and brains to go with it. A Unitronic Stage 2 tune serves as the center of a bump in power to the 4.2-liter powerplant, while an APR carbon fiber intake, JHM intake spacers and high-pressure fuel pump, and coil packs from an Audi R8 provide support in the form of more squirt, squish, bang, and blow. With the addition of a 75-shot of nitrous from the trunk, the S5 is propelled to 465 horsepower at the crank, and bellows its swan song out of a custom straight pipe, fabbed up by Intech Performance. 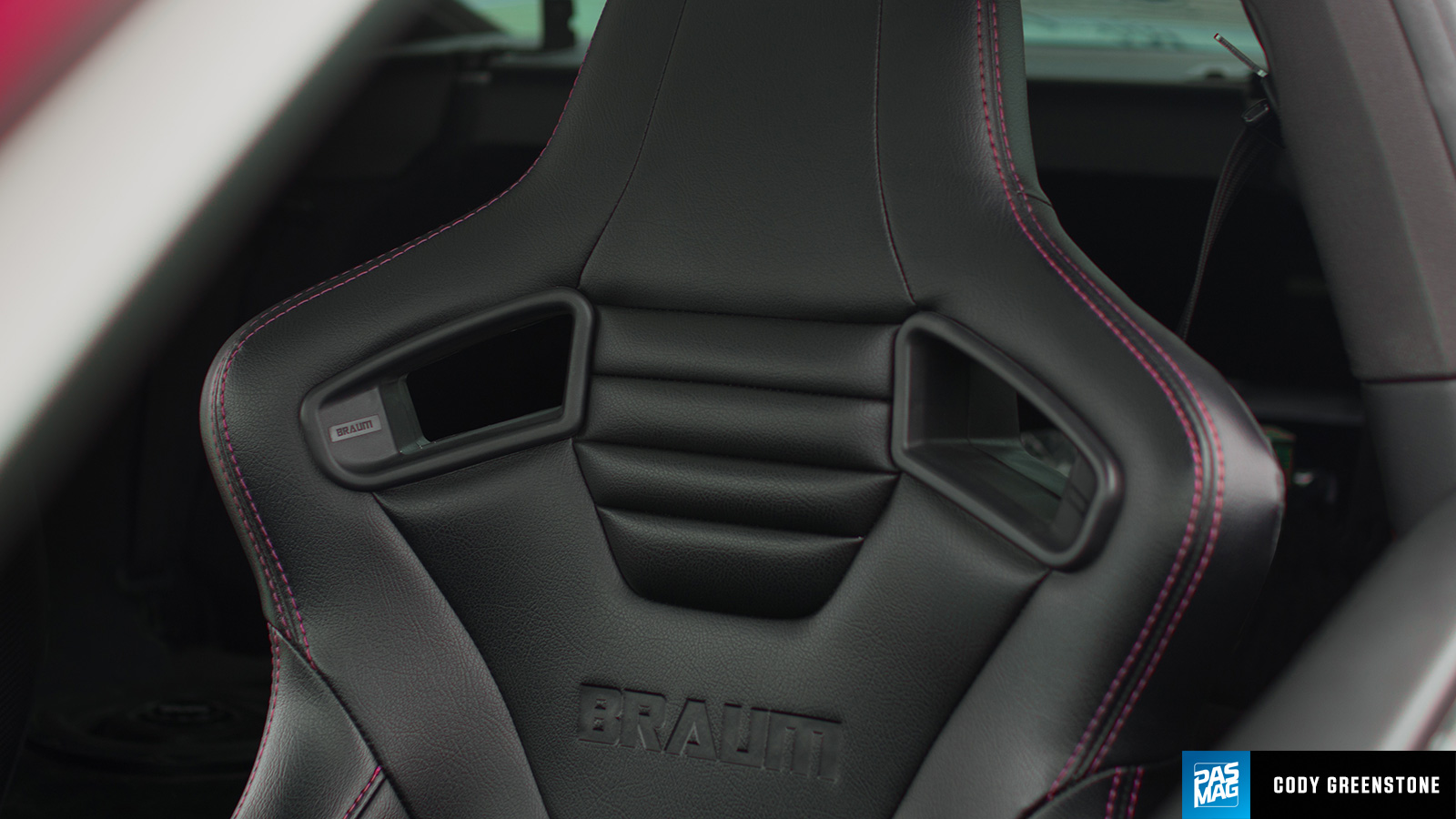 Inside, Hoffman sits comfortably in a set of Braum Racing Elite X Series racing seats and directs his S5 with a transplanted flat-bottom wheel out of an S4. Big Boy Toyz (BBT) Fabrication - a shop that Hoffman credits with keeping his car ticking and in tip top condition - did a stellar job on the rear seat delete in the back of the Audi. Soon to be taking up some serious real estate in that expansive area is a full-blown audio install and display. BBT will be hosting an installer from Focal soon, which gives you an idea of how serious this system will be. Stay tuned!

Yes, Hoffman is also a victim of the other car enthusiast curse – it’s never truly done. In this case, it makes more sense as brands are taking more of a focus on European makes and offering their owners the tools to build something awesome – a shift that Euro owners are really appreciative of.

“When it came to selecting parts for the build, most of the time I was researching custom alternatives because my platform isn’t really a go-to car for aftermarket companies,” Hoffman says of his challenges in the build. “If there were parts available for it, they were mad expensive and most often the custom route was an easier choice. However, as time went on, companies like Libertywalk and Rieger were starting to pump out really cool parts that would help the car get to the level I wanted.”

There’s definitely more to come from Hoffman and his “daily” in the future, and I think I can say that we’re all excited to see what the next iteration of the S5 will be, and what she’ll be wearing. 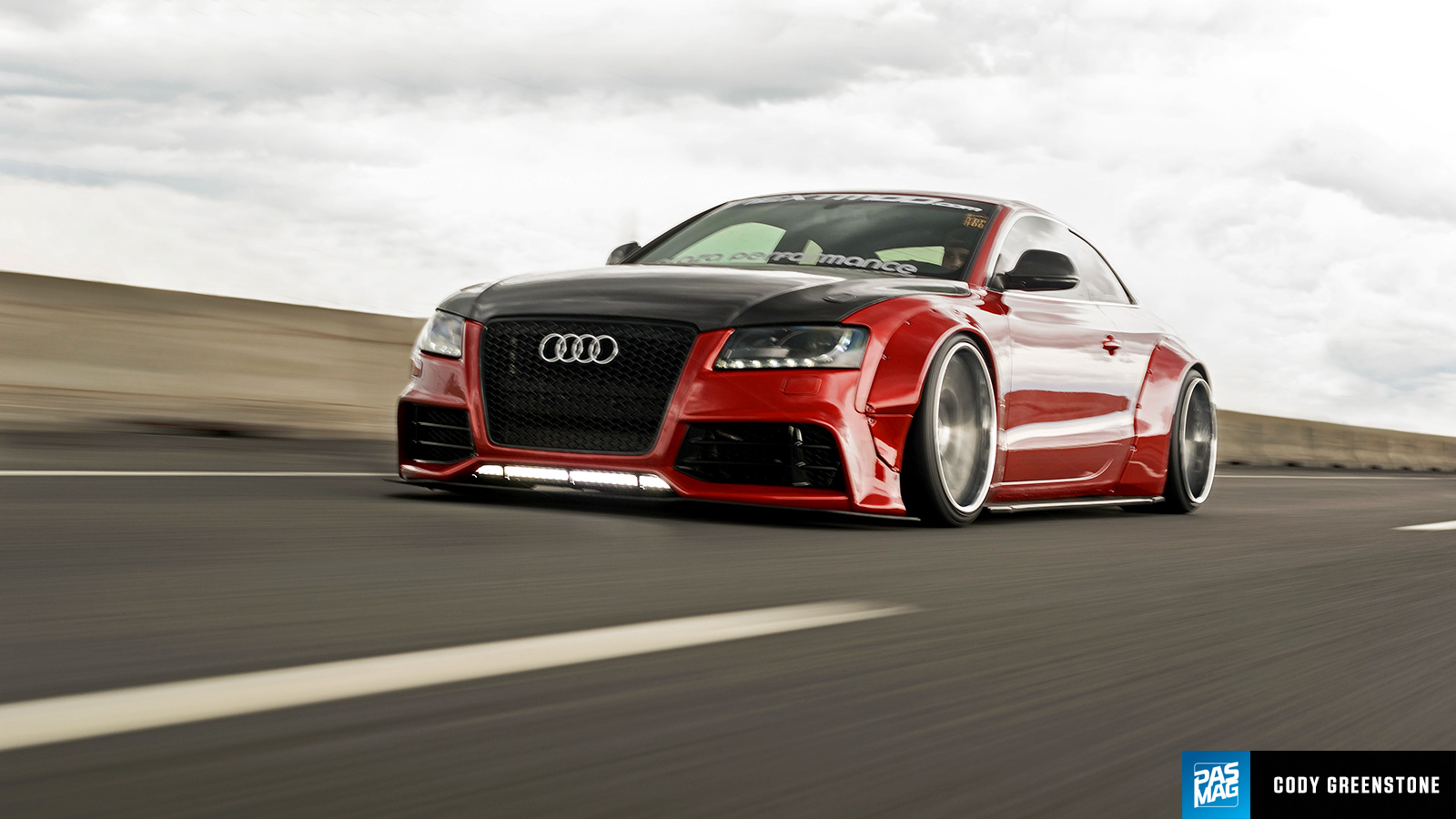 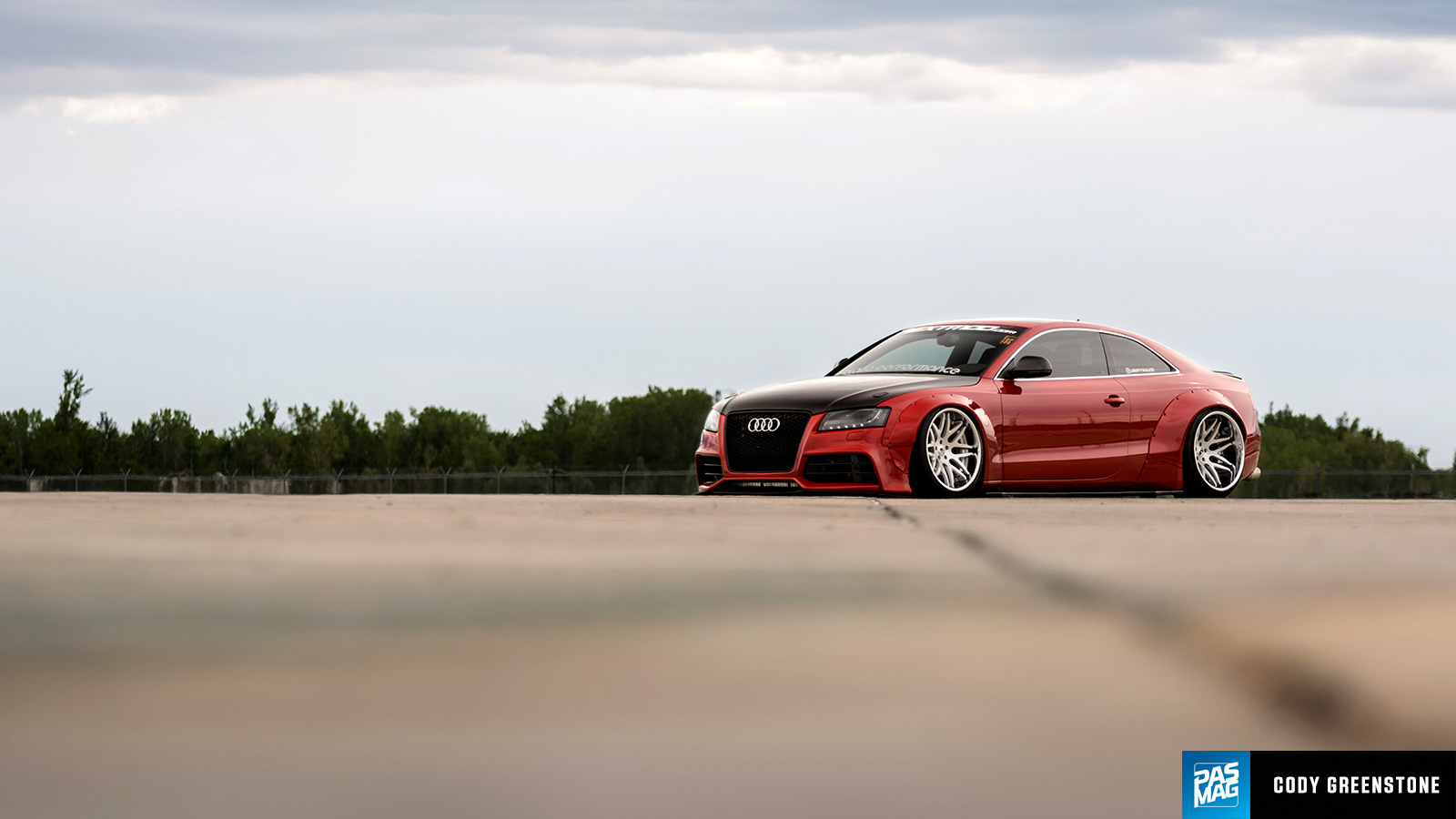 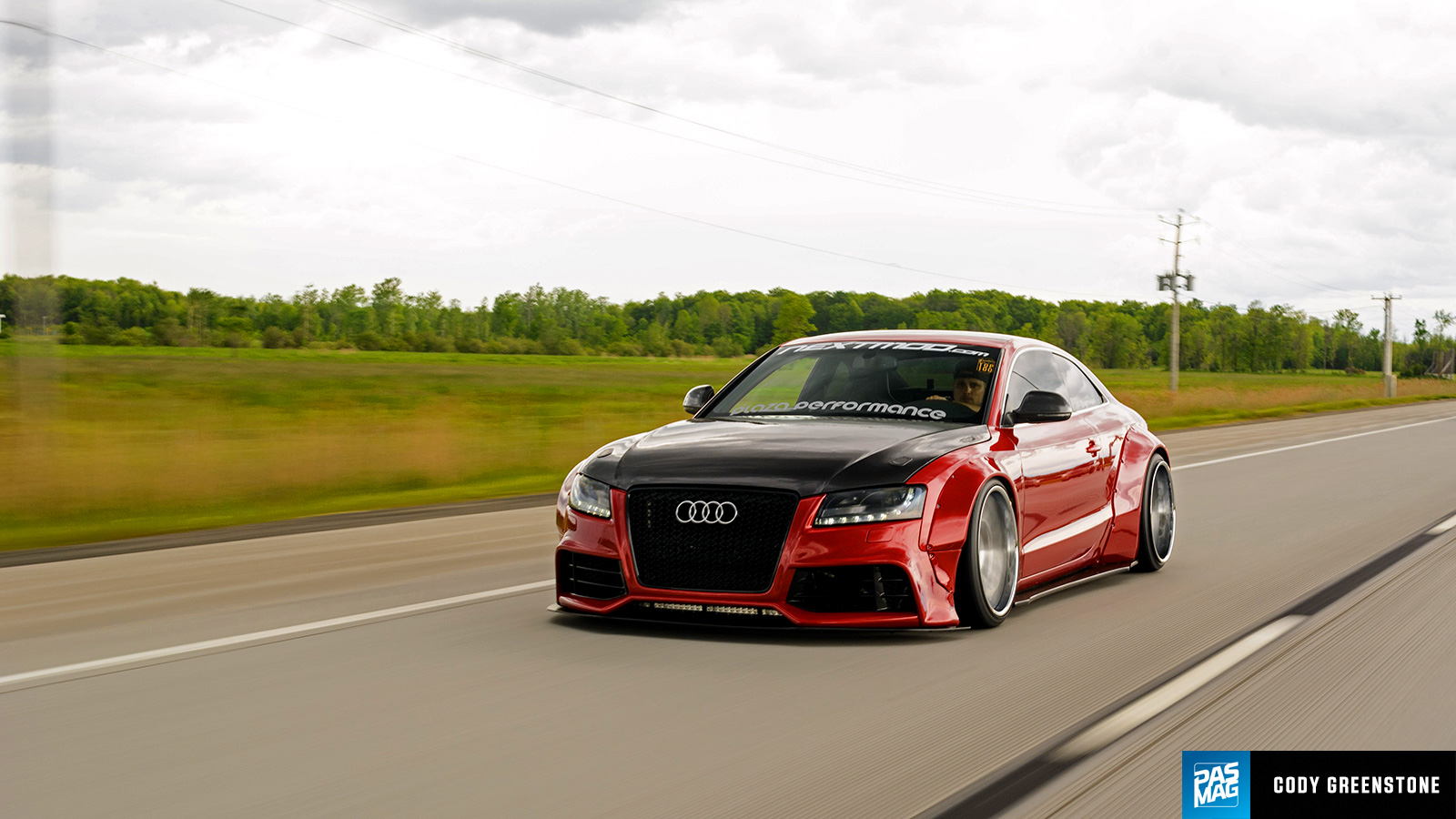 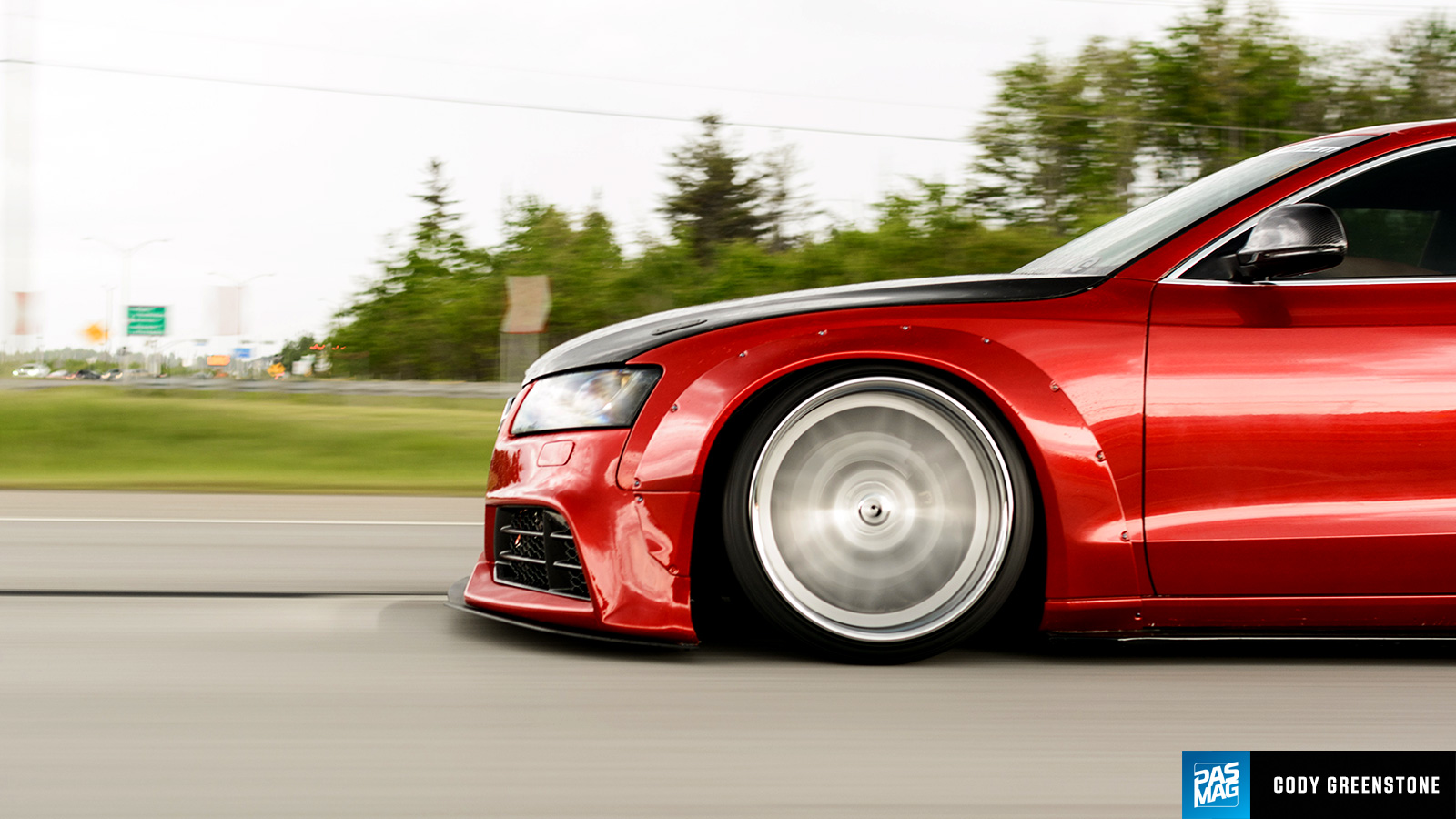 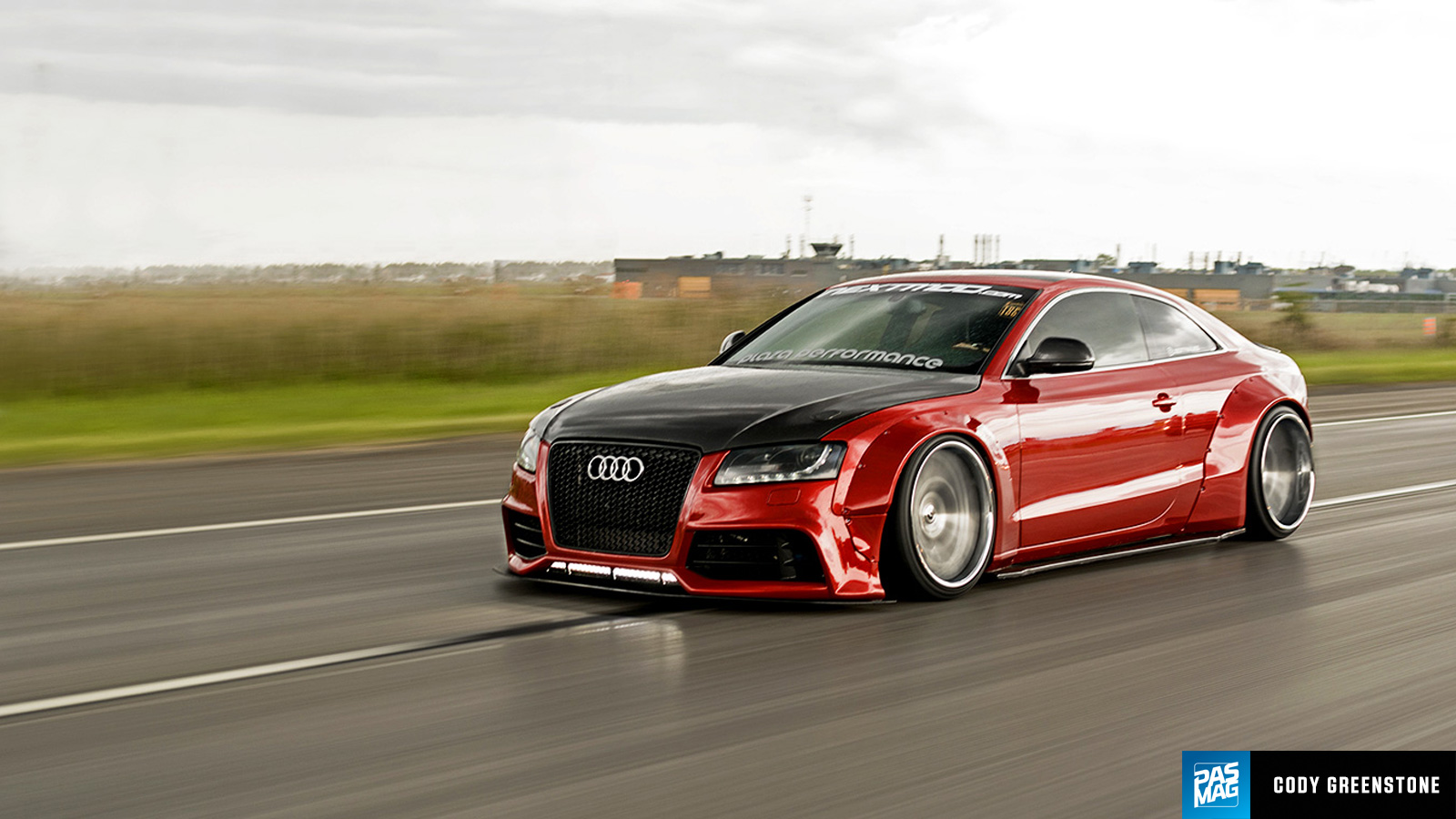 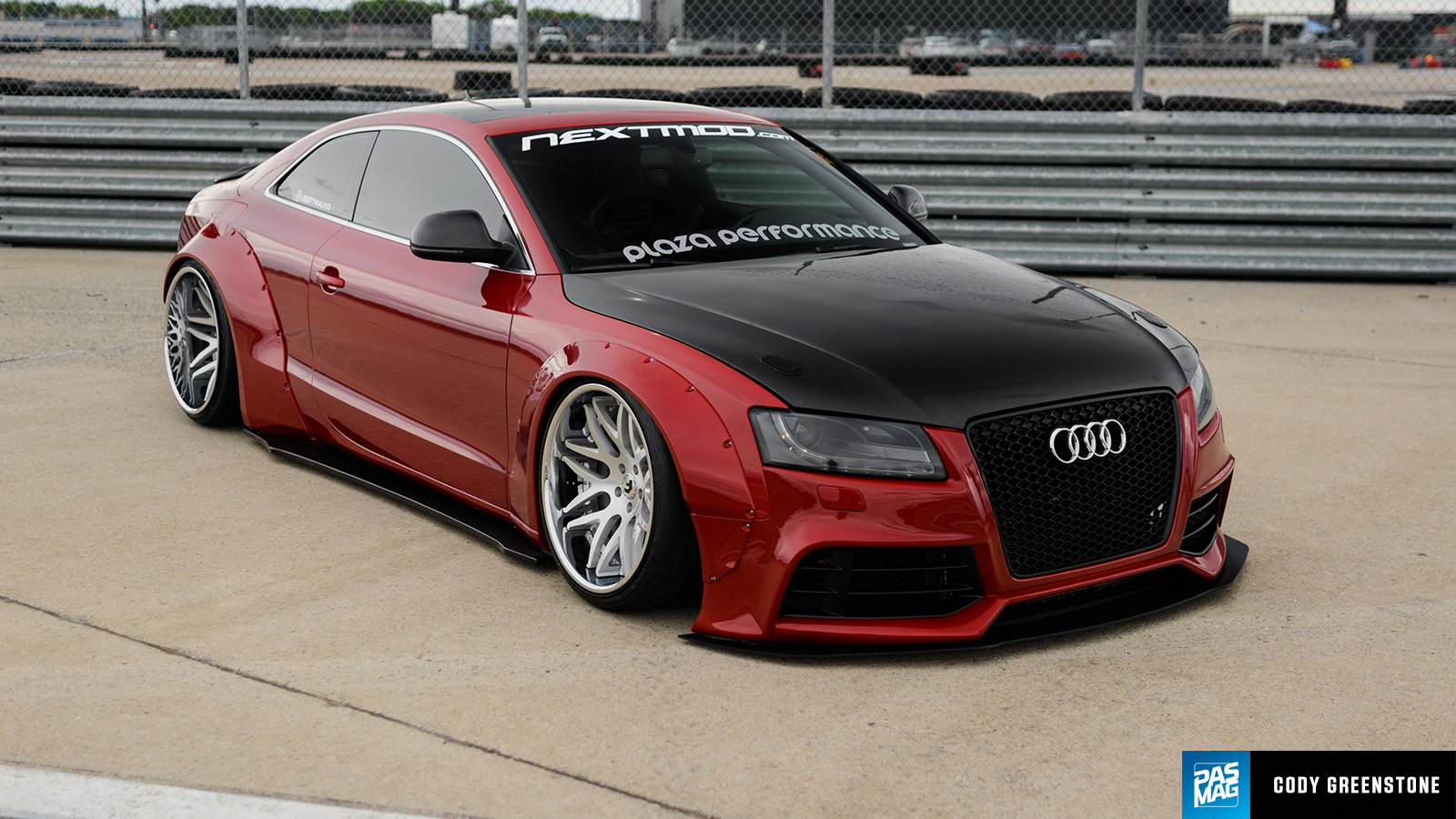 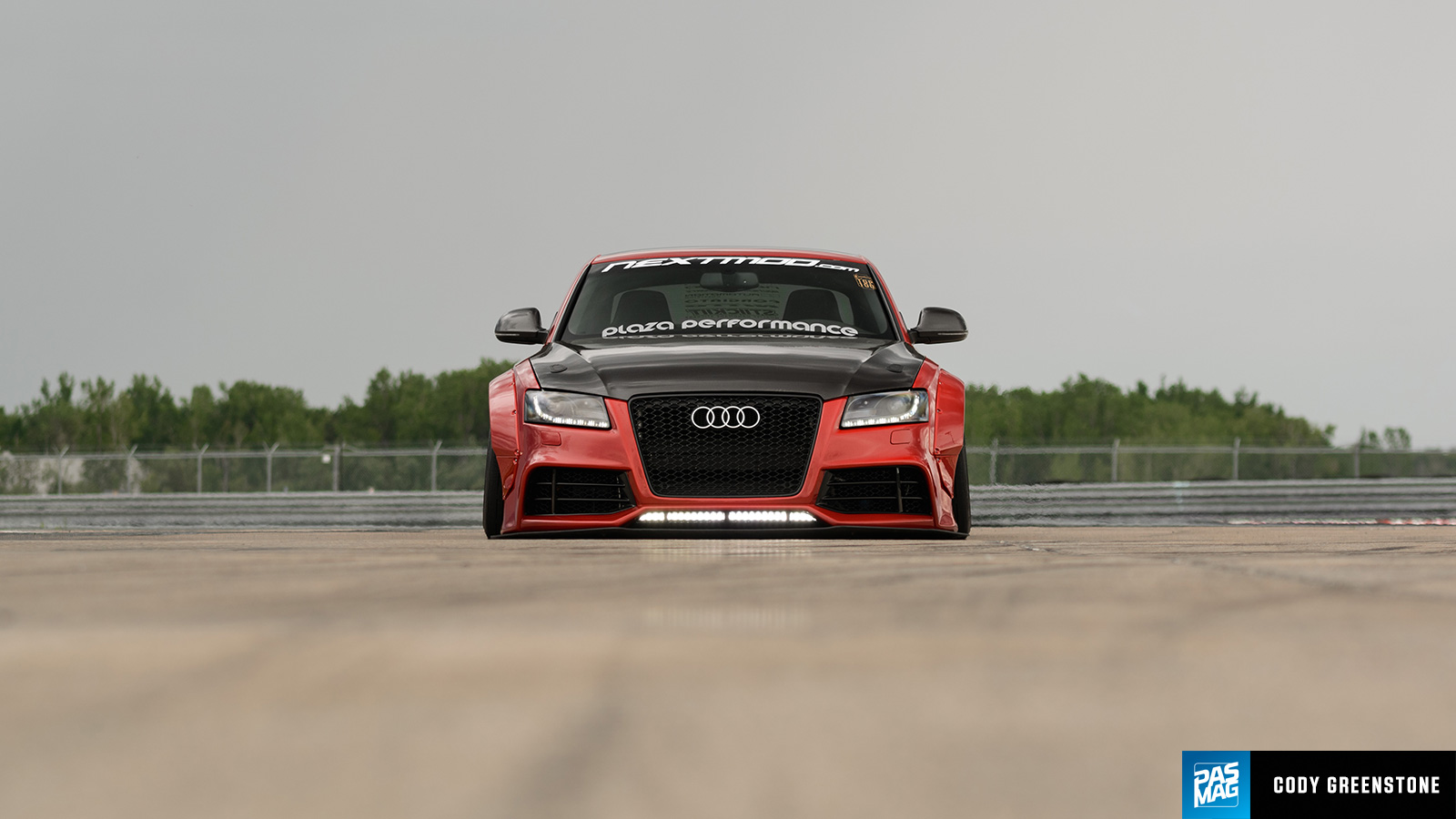 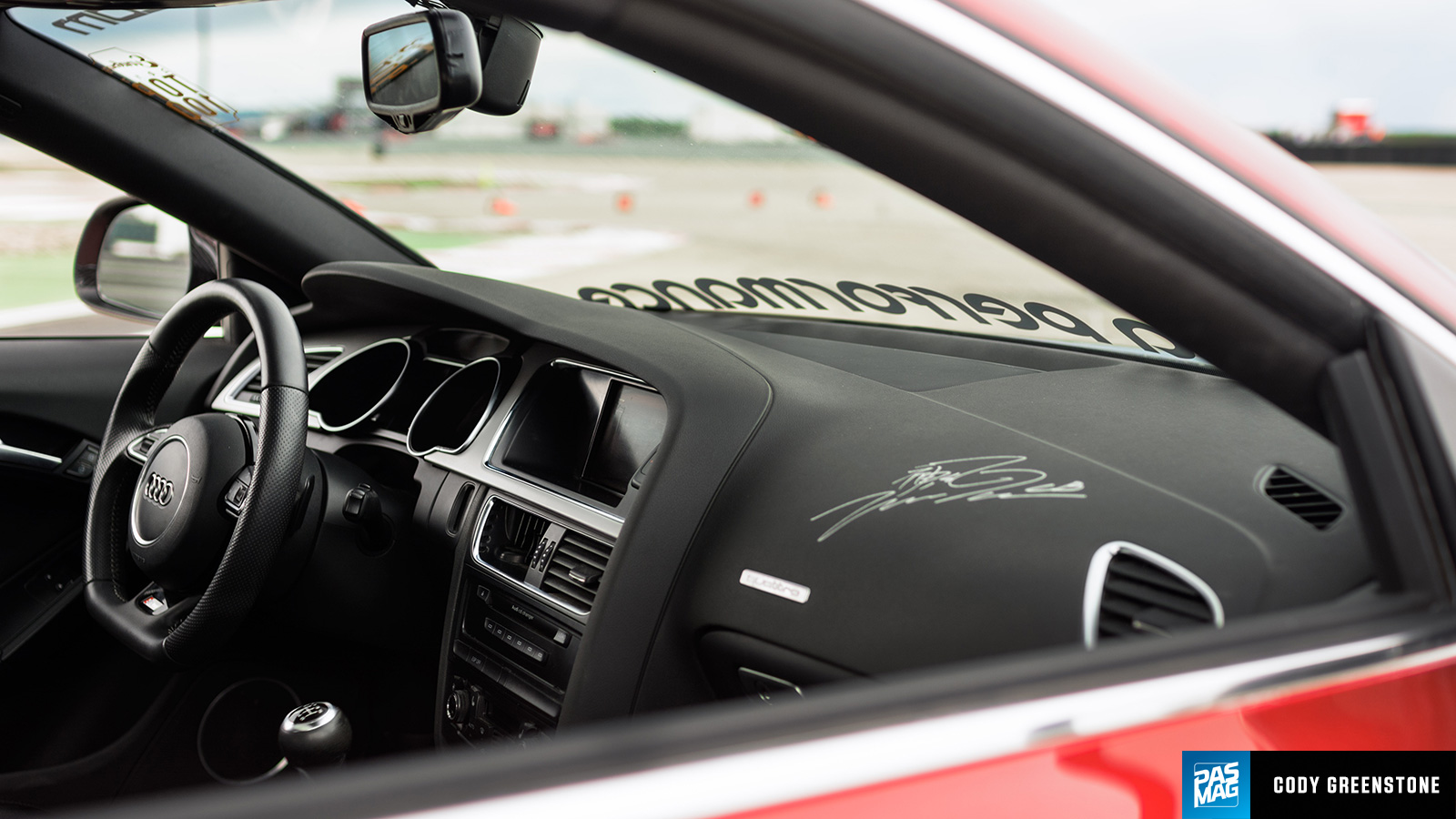 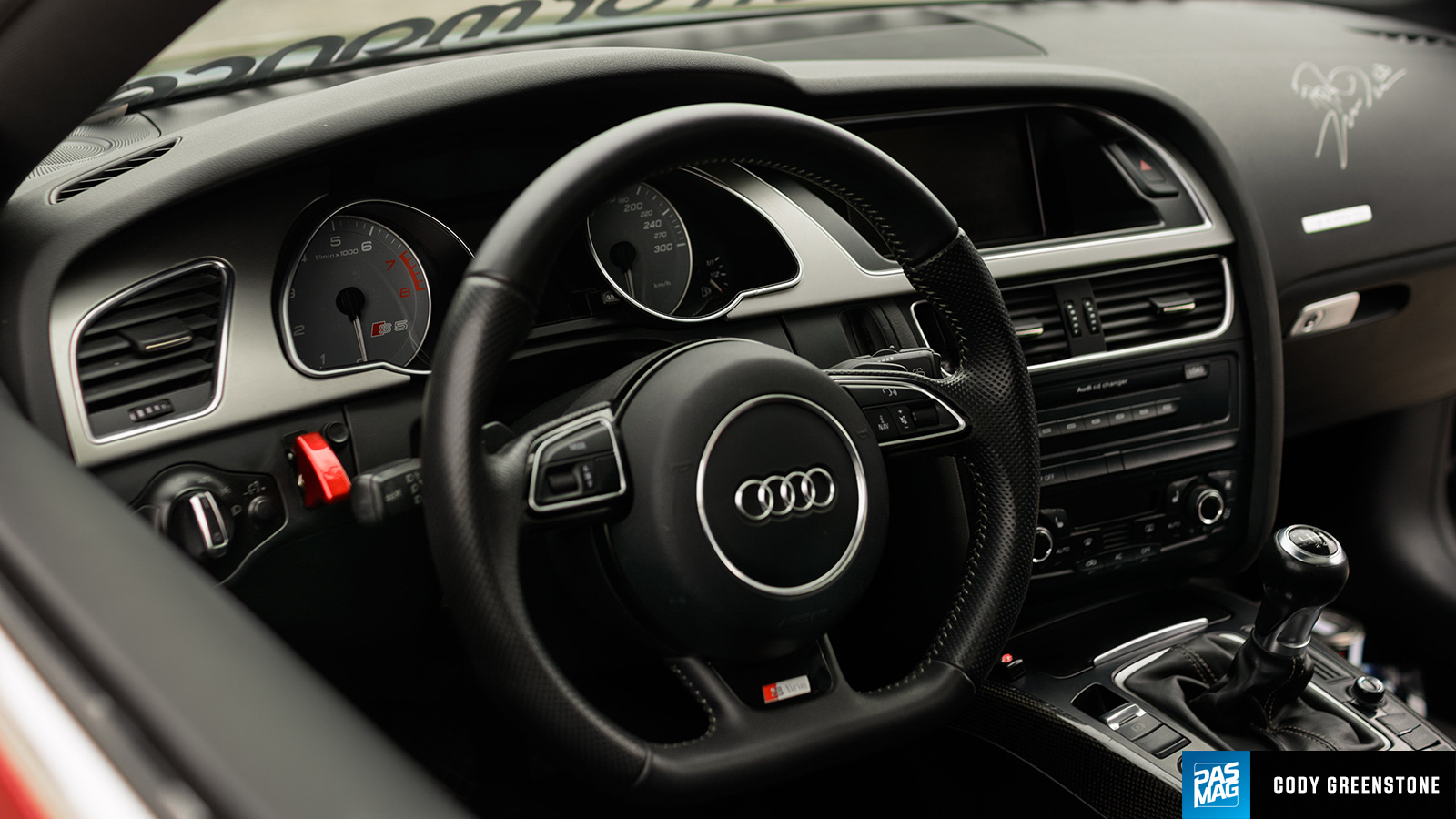 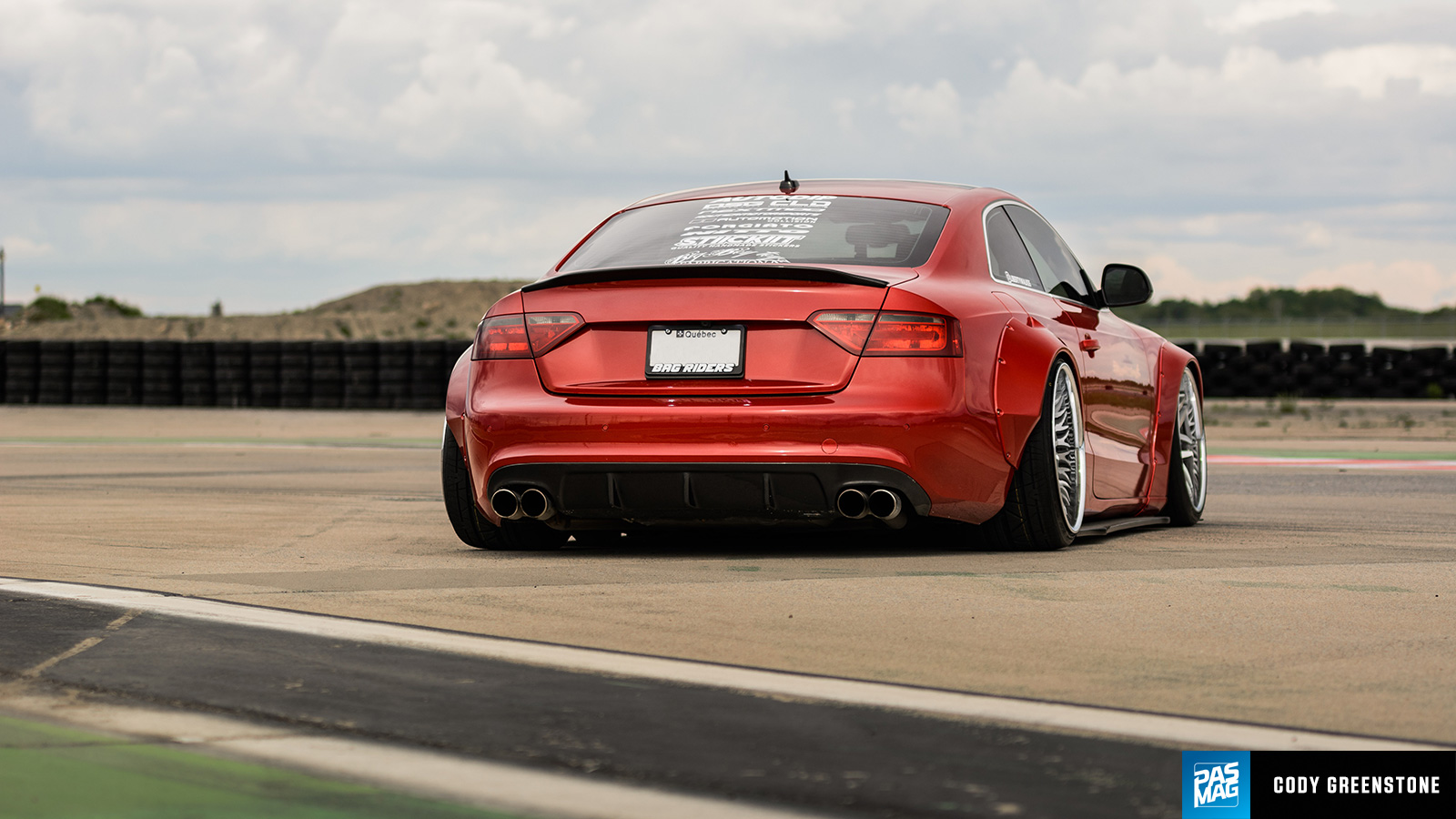 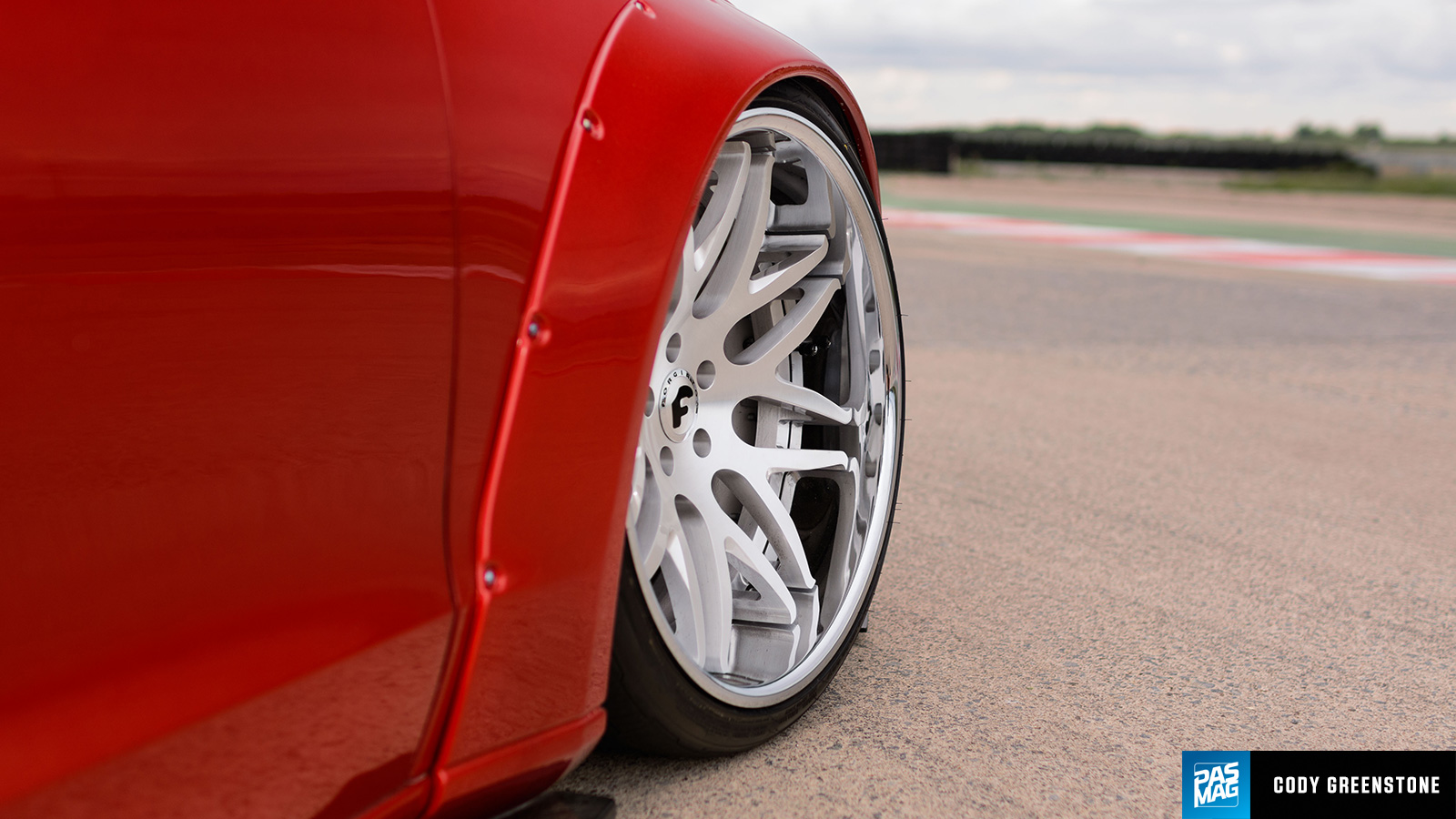 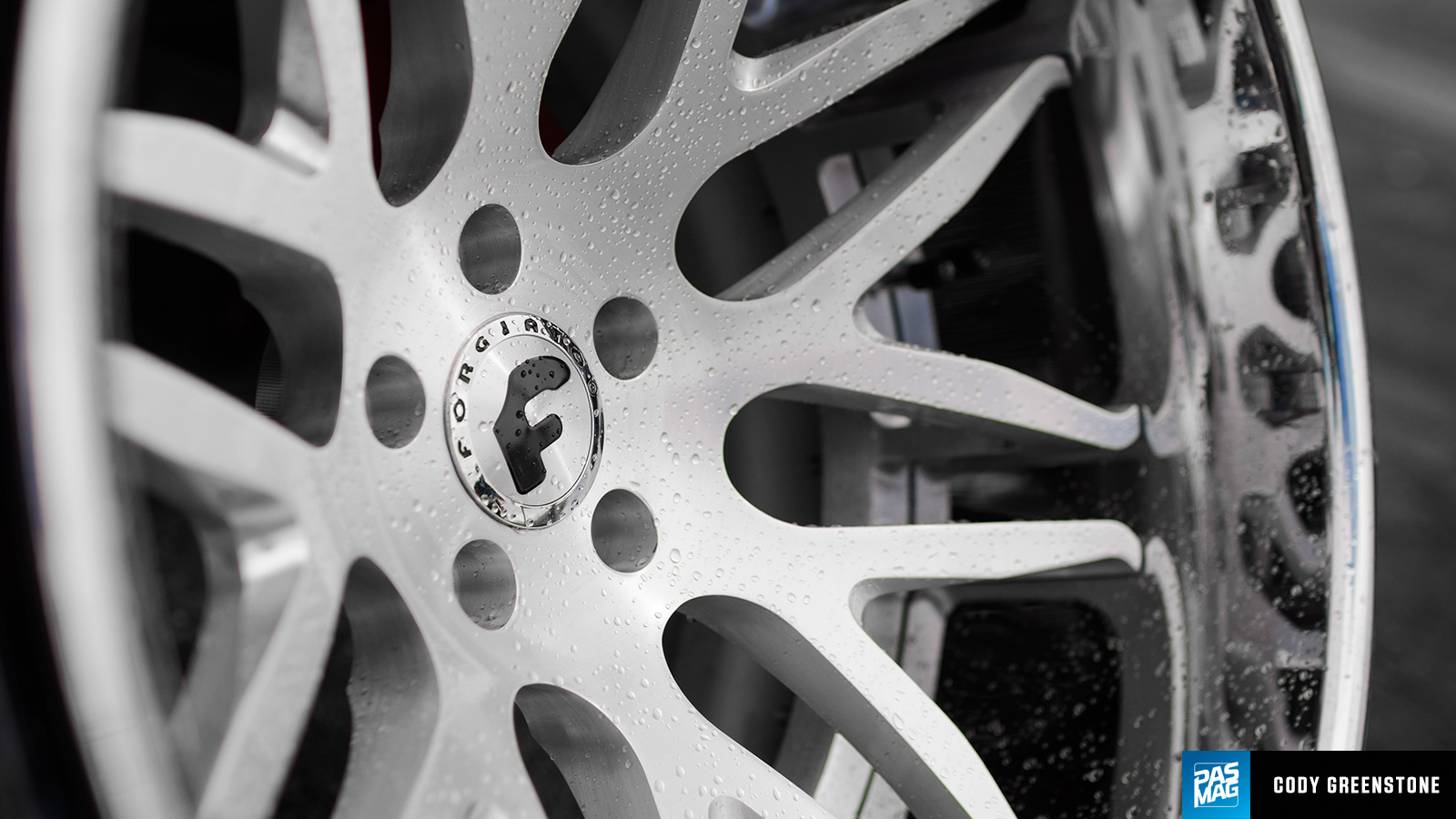 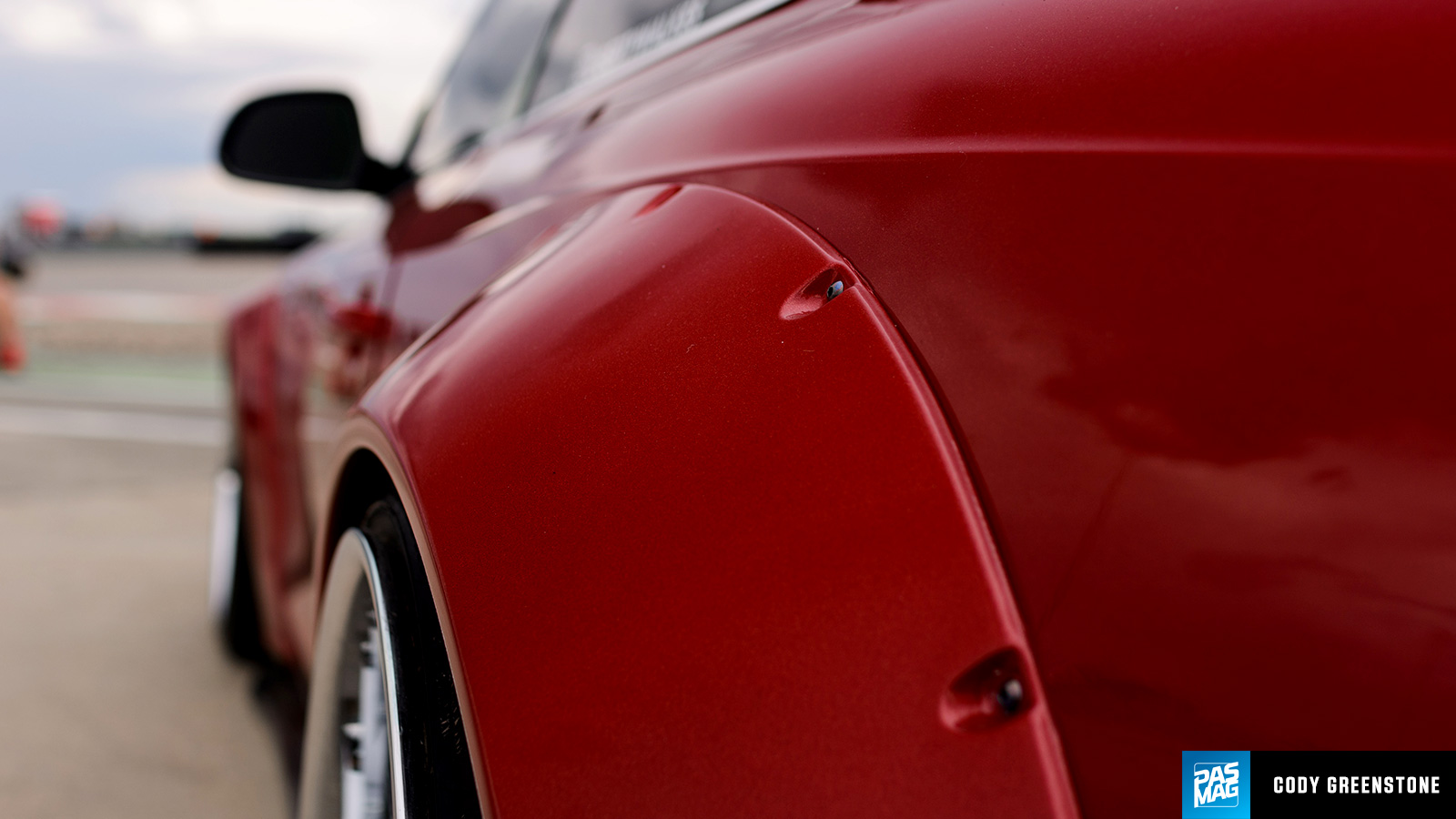 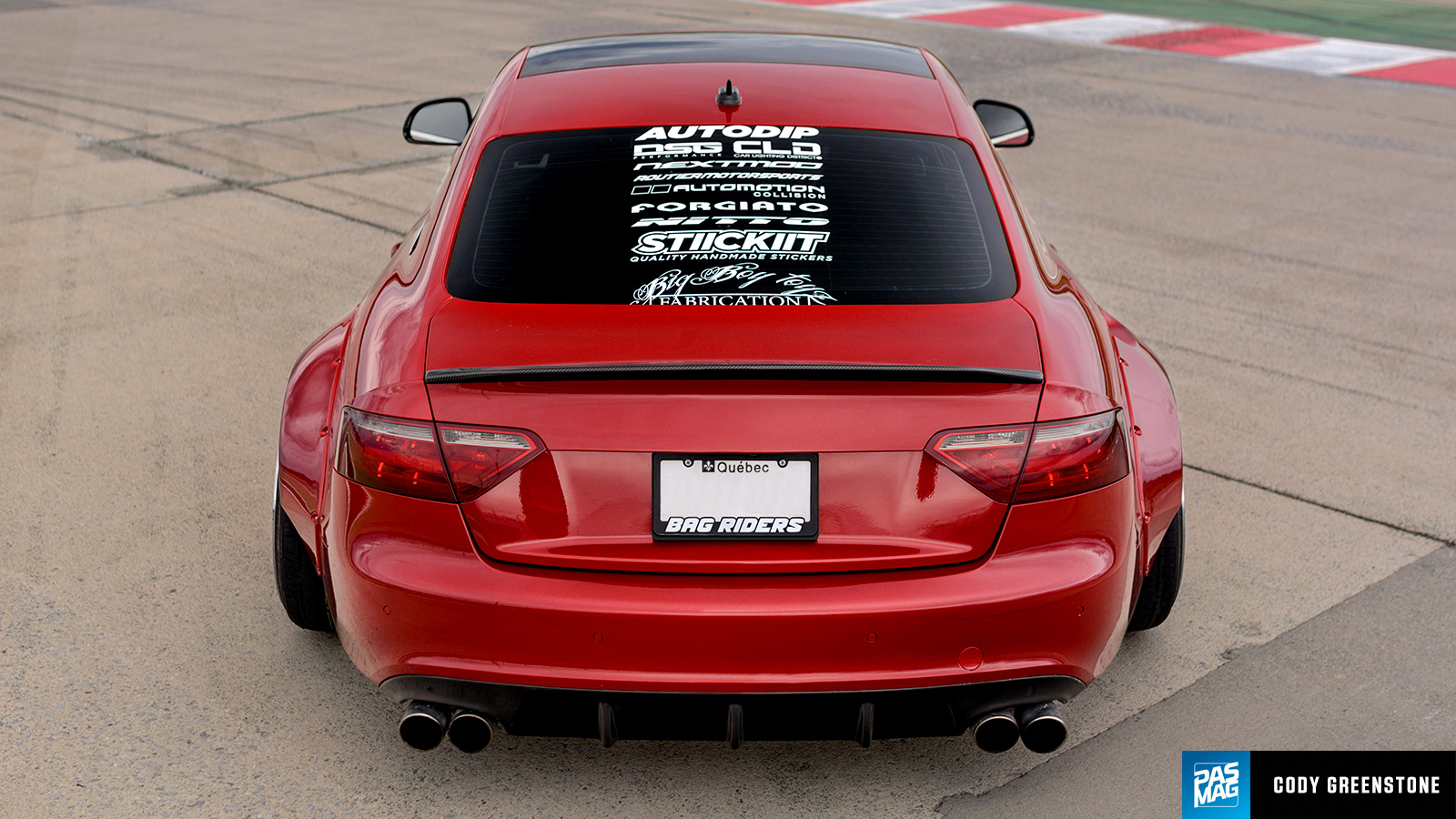 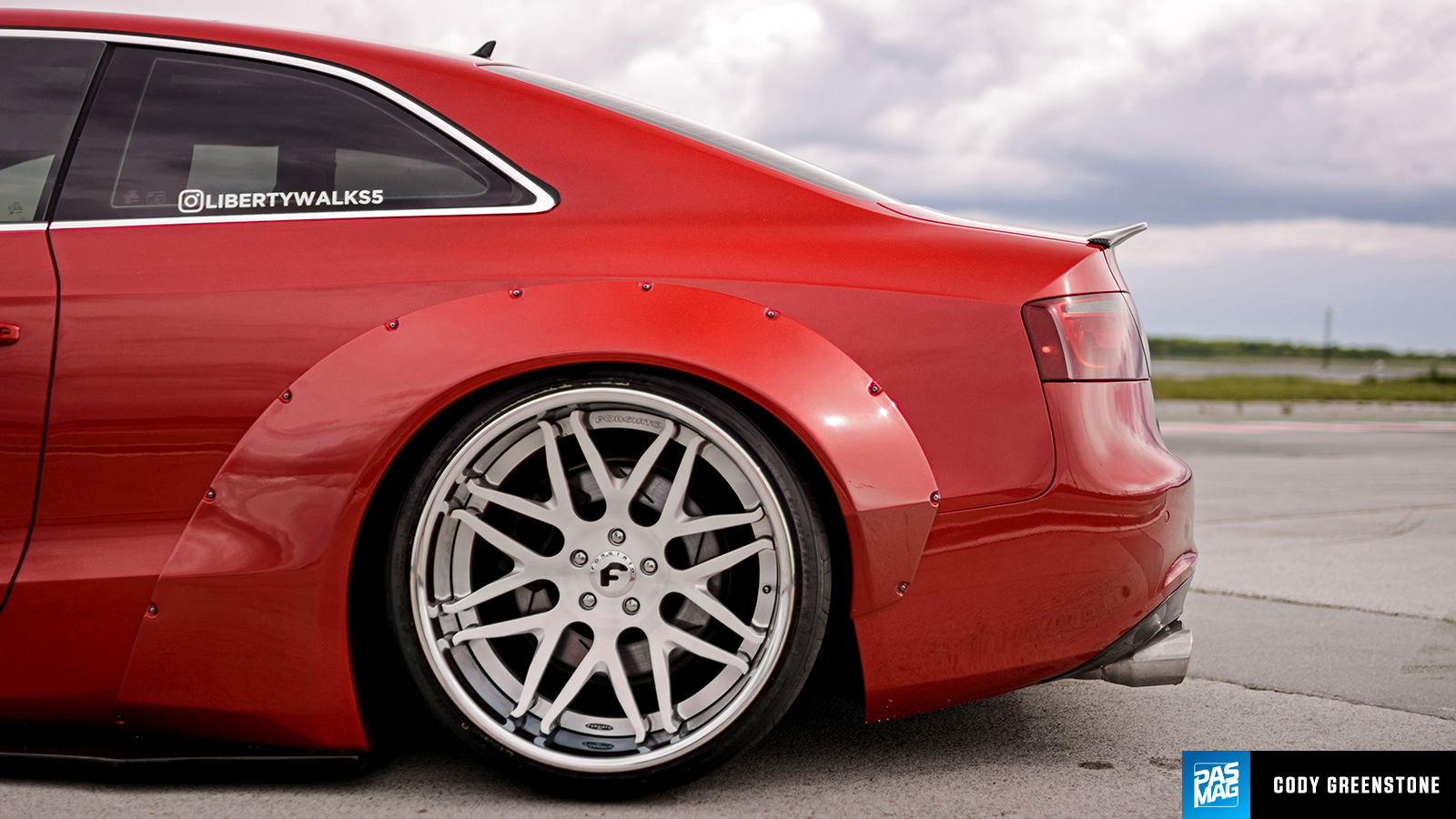