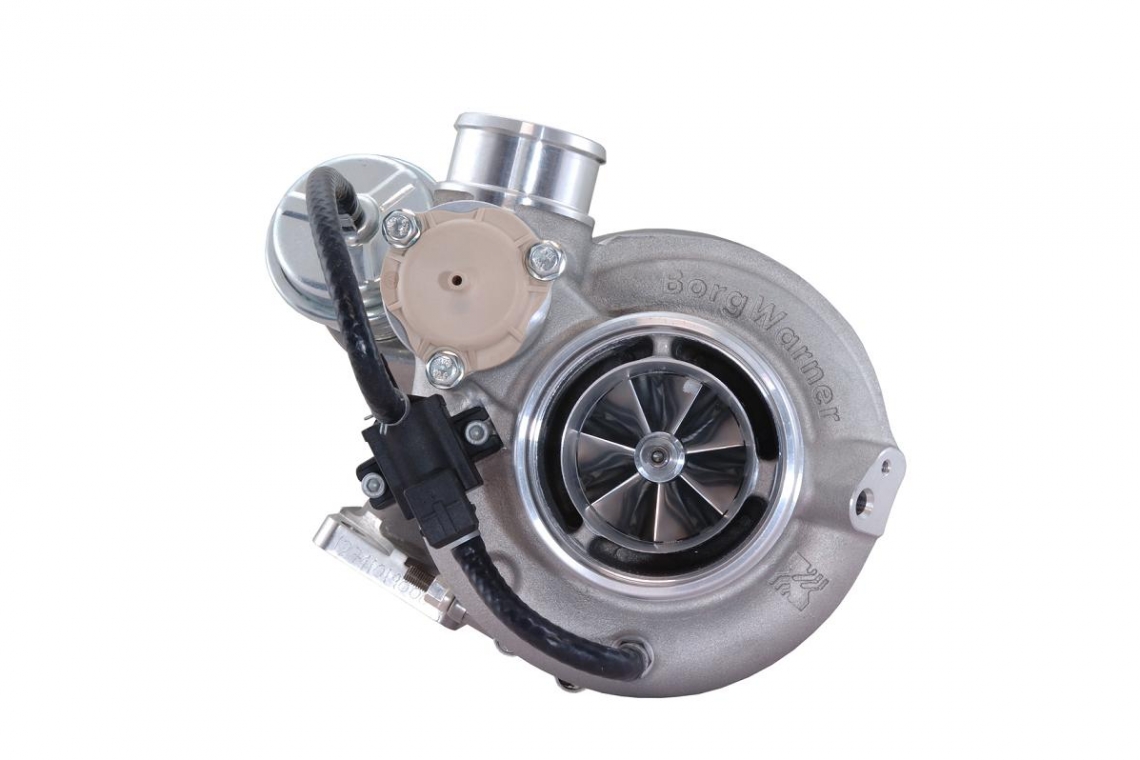 Each year we see some improvements in materials and overall efficiency from turbo manufacturers, but nothing prepared us for what we found at the BorgWarner Turbo Systems booth at SEMA recently. BorgWarner Turbo Systems have been manufacturing turbos and wastegates under their AirWerks brand for a while with success in the racing world. But engineer Brock Fraser and the North American turbo team decided to scrap almost everything they knew about turbos and designed one from the ground up. The result was their new EFR (Engineered For Racing) Series turbos, which bear almost no resemblance to conventional units other than the theory of compressing air into the combustion chamber.

During a two-hour conversation I had with the BorgWarner Turbo Systems team and their PR reps at HP Prose, I realized they were about to start a revolution. Turbos from the EFR series are high performance units that requires no additional wastegate or even a blow-off valve! Everything is integrated into a compact frame constructed of exotic materials. The resulting performance, efficiency and cost savings is unprecedented, but we expect the market to try to follow suit.

The EFR Series turbos come in a variety of different applications and there are more being developed everyday. Designed and built in the USA, the construction is top notch and BorgWarner Turbo Systems have proven themselves in both the demanding OEM market and extreme applications in motorsports. The compressor housing is made from a lightweight cast aluminum, which is mated to a center cartridge, which is nested into a stainless steel turbine housing that will never oxidize and dissipates heat effectively. The center cartridge contains a dual ceramic ball-bearing assembly which allows for faster spool up and instant throttle response. The compressor wheel is a ridiculously stout forged mill design, which eclipses traditional billet process for durability. The secret to the performance of the EFR-Series turbo is an ultra-light Gamma Ti (or Titanium Aluminide) turbine wheel, which is half the weight of popular Inconel 713C turbine wheels, yet far stronger. We picked up the turbine wheel on display and its incredible light weight will translate into 300-500rpm quicker spool time.

With the EFR- Series, BorgWarner Turbo Systems have started to rewrite the rules of turbo technology. First, this turbo features an internal wastegate, which was traditionally reserved for lower power set-ups. While an internal wastegate turbo is nothing new, the BorgWarner Turbo Systems integrated wastegate flap is massive and they claim will rival the performance of any 44mm external for high boost applications. The bonus is that it doesn’t need any extra plumbing or add extra weight. The compressor cover also features an integrated boost solenoid, so that it isn’t required elsewhere in the set-up. Now for the game changer, BorgWarner Turbo Systems have designed an integrated Compressor Releases Valve (or CRV) which is essentially a blow-off valve. The CRV is a module mounted right at the compressor output itself, which pops off when the throttle plate slams shut to prevent compressor surge. The CRV is vented at an optimal time as opposed to a delay filling up the entire system and losing boost pressure between shifts.

Probably the most appealing feature is the way in which all of these products are perfectly engineered together by BorgWarner Turbo Systems. You aren’t mixing and matching manufacturers, plumbing something wrong or incorrectly selecting a part – it all works at maximum efficiency. Because all of this gear is onboard, the cost savings is substantial. Everything you would have spent on installing external blow-off valves and wastegates stays in your pocket. One complete turbo system – for one price.

With BorgWarner Turbo Systems making such a huge splash at SEMA with this product and achieving some great success with the Sierra Sierra Evo in Redline Time Attack competition this year, we’re sure there will be a new market for block-off plates in 2011.