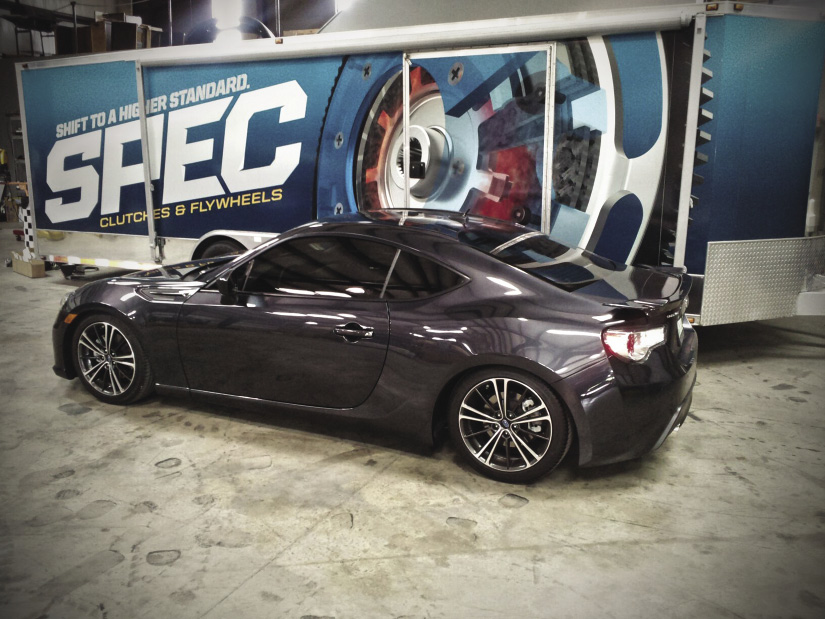 Over the past 8 months, SPEC Clutch has prototyped over 30 new products in-house at its facility in Birmingham, Alabama. Most of the prototyping sessions involved cars that had already been modified and came with set goals in mind. Invariably, this makes making a clutch recommendation straightforward and never really in question. But, whenever a new tuner platform comes out – like the Subaru BRZ and Scion FR-S, for example – the task becomes decidedly more difficult as there are many unanswered questions to consider. To help us get our heads straight on this, we asked David Norton, Owner, to walk us through the process. This is what we learned.

When prototyping the new Subaru BRZ, the engineers' challenge became how to select and install a street-friendly unit that would hold unknown future power potential. Given the fact the BRZ was lightly-modified (mostly due to the limited availability of performance parts early on), they knew what they were going to install, but the owner of the car also wanted to know what considerations go into selecting the right clutch for the right job.

A clutch change involves more than just replacing the clutch itself. Everything needs to be done right the first time because it is labor intensive. There are several considerations to address when making a recommendation; and, the end user should rank or prioritize these before choosing a high performance clutch.

The first consideration is torque capacity, or how much power you need it to hold. That is most often the first priority and the primary reason for upgrading. The proper yard stick by which to rate a clutch is torque, not horsepower. Based on the nature of the modifications, one should be able to determine the torque level. Most of the time it will be within 15% above or below your horsepower.

As an example, let's assume a strong turbo kit will produce at least 300 lb-ft of torque on the BRZ. It is recommended that a 10-15% capacity buffer be added to the goal to be safe and allow for underrated modifications and/or the owner’s greed for more power. That buffer can also help maximize clutch life. So, a clutch with a 330-345 lb-ft of torque capacity would be a good choice. Spec's ratings take into consideration that sticky tires may be used as well.

The second consideration is drivability, or the desired clutch to feel at engagement and pedal requirement. Pedal requirement is not a huge concern on the Subaru as the hydraulic system lends to ease of use and engineers were able to produce a lot of clamp load with the lowest possible actuation requirement (a popular feature of Spec clutches).

The stock BRZ pedal effort is actually too light, making the intuitive diaphragm break point nearly impossible. To combat this, Spec engineered more feedback into the pressure plate with the additional clamp load. The feel at engagement would be important since the car will be street driven and is likely incur stop-and-go situations. The choices for a streetable engagement would narrow the field to a sprung hub (dampened) disc and a material configuration that is somewhat forgiving.

The third consideration is life expectancy. It is very hard for a clutch manufacturer to rate or guarantee life expectancy simply because there are many after-sale factors that determine the wear cycle. Clutch life will be maximized as long as you stay within the clutch capacity (provided the buffer as explained above has been taken into account) and follow special instructions that accompany a high performance clutch as well as industry standard installation practices like replacing old bolts, refreshing worn hydraulics, surfacing or replacing the flywheel, etc. Given instructions are properly followed during and after installation, a high performance clutch not only will last a lot longer than an original equipment clutch in a modified car, but also outlive an original equipment clutch in an unmodified car.

The fourth consideration is weight. Some street and track driven cars can benefit from a clutch or flywheel that is lighter in weight. The benefits can be in throttle response and horsepower/torque. The lightweight clutches will not produce benefits or changes in drivability as drastically as a lightweight flywheel, nor are they as costly. A lighter clutch alone will not produce any substantial downside and is a great way to complement your modifications with parts that can produce gains without adding stress to any other part of the car.

The last consideration is price. Value will be based on how you prioritize the above considerations. Basically, a clutch is like taxes. Spend sufficiently now or you will be penalized in the future with additional parts and labor costs!

Ultimately, we installed the stage 3+ clutch and our 10-pound aluminum flywheel in the BRZ. For this build, the stage 3+ covers the power goals, offers stock-like daily drivability and yields unparalleled wear life. The aluminum flywheel produced surprising gains on this application – even in relatively stock, naturally aspirated trim with no programming – and this combination is already proving to be a best-seller for the Subaru BRZ/Scion FR-S.