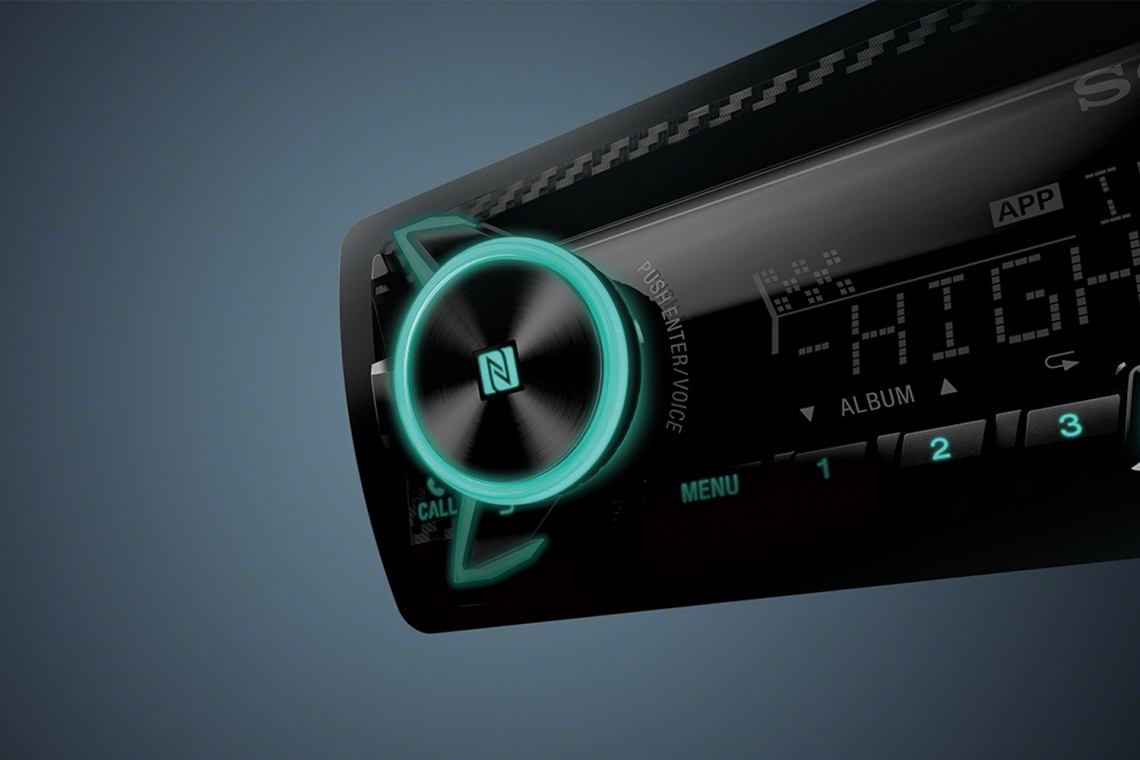 Through the utilization of new high-power Class D chipsets, Sony has introduced the world’s most powerful CD receiver for car audio applications.

The all-new Sony MEX-XB100BT is equipped with an honest-to-goodness CEA-2006B rated, 40 watt per channel amplifier! This represents a near 100-percent increase in power available from a head unit. The new single-DIN powerhouse is also equipped with a host of other important and popular features and best of all, it has a retail price of only $249.99 in Canada and $229.99 in the US. 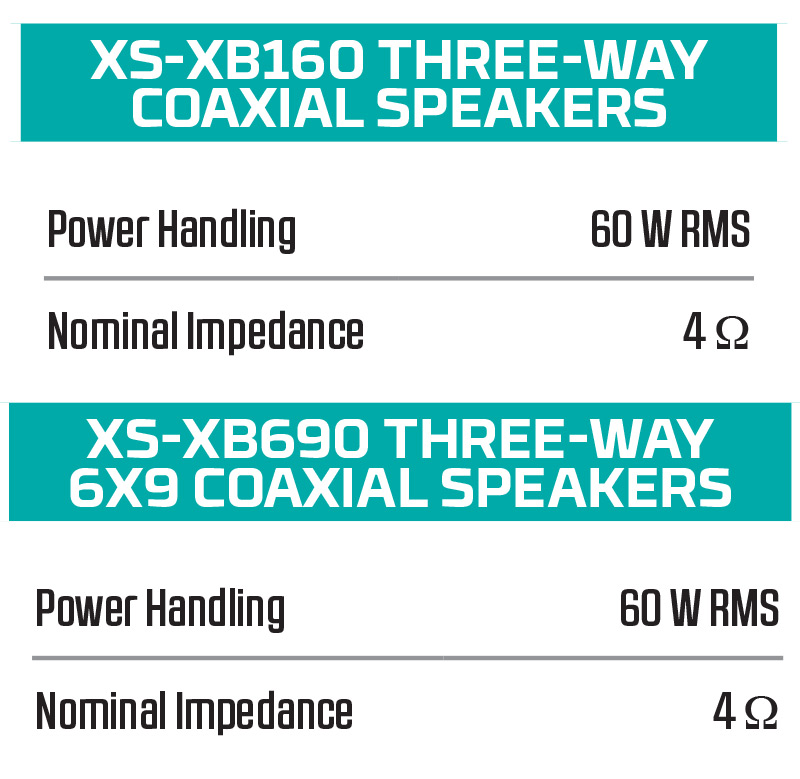 The MEX-XB100BT not only has about twice the power output of most head units, it is also equipped with Bluetooth, NFC, Sony’s Mega Bass sound shaping, Pandora (US only), SiriusXM connectivity, and perhaps best of all, voice control capability for either Android or iPhone.

At the heart of the unit is the four-channel Class D amplifier from Texas Instruments. This high performance integrated amplifier is designed for excellent sound quality and serious power output while maximizing power efficiency. Translation: It sounds great, makes a lot of power, and draws a minimum amount of current. When used with Sony’s XB series speakers, the system is designed to make the most of Sony’s Mega Bass circuitry, which might convince you that a subwoofer isn’t even needed! The “Advanced Sound Engine” DSP built into the MEX-XB100BT allows you to make all sorts of adjustments including custom equalization, crossover settings and more.

But gobs of power and great sound simply aren’t enough these days. We expect to integrate our smartphones and take advantage of the technology provided. To that end, Sony has developed an app called SongPal, which can be downloaded and installed on your smartphone. With it, you can control your music and smartphone apps from either your phone or the head unit.

Additionally, SongPal allows basic controls via voice commands. For example, you might say “navigation” to launch your navigation app, or reply to your last SMS message by simply speaking. You can even speak song track names and have them play automatically. If you get email on your phone, the SongPal app will keep you up to date by reading your mail or SMS messages to you. It also works in the other direction. For instance: if you have a USB drive loaded with music plugged into the MEX-XB100BT, you can browse through the selections by using the screen on your smartphone.

One more feature that may be quite popular for some users is the ability to bring a “dance club” atmosphere to your car’s dashboard. Thanks to Sony’s “Sound and Color Synchronization” feature that senses the beat of your music, the head unit’s LED display can change color and pulse to the beat of the music, giving passengers a visual sensation to match the listening experience.

To get the most out of the MEX-XB100BT, Sony suggests pairing the unit with their new three-way XB series speakers. Available in three sizes (5.25, 6 and 6x9 inch), these speakers are designed to work perfectly with the more powerful amplifier used in the head unit. The speakers come with wiring, grilles and all the required mounting hardware.

CONTROLS AND ERGONOMICS
The MEX-XB100BT is a simple and intuitive head unit. Commonly used functions like source selection and track up/down have large, well-placed buttons. The volume is controlled using a rotary encoder, which also houses the NFC contact point. Pairing a phone is very simple and quick, and the SongPal app is also easy to download and understand.

The LCD display and the button illumination colors can be set independently from each other, and both have the ability to be set to pretty much any color you could possibly want. The display itself is well-lit and easy to read, except in direct sunlight, which is a common problem with displays of this type. The removable faceplate installs and removes easily with a quality feel.

The menus and submenus are typical Sony; logically laid out and easy to understand. It would be nice to have the sub level control adjustment more readily available, but most subwoofer amps have their own level control anyway.

I install the XS-XB1630 six-inch three-way speakers in a set of sealed cabinets with about 0.75 cubic feet of air volume. The XS-XB6930 6x9s are installed in my listening room baffles. I connect the four speakers to the outputs of the MEX-XB100BT and listen to the   for about three hours.

The first thing I notice is the additional power available. Most head units play only moderately loud before becoming distorted, but the high power output in the Sony allows me to drive the system much harder than I would have expected for a simple “deck and four.” The bass response is strong and greater than I expected from this system, but serious audiophiles are still going to want a subwoofer.

Throughout my listening session, I note the Sony system producing an “exciting” type of sound. I play with the Mega-Bass button quite a bit during my listening, noticing that it has a greater effect on the music at lower volumes, and a decreasing effect as the volume is turned up. This is a good thing - not only in the interest of sound quality, but also in the longevity of the loudspeakers. The music feels lively and energetic, almost manic on occasion. Where an audiophile might look for flatter, more accurate response, this system provided a sound that will have great appeal for the average listener who simply wants good clean sound and plenty of volume.

ON THE BENCH
After all the listening is over, I measure the specifications of the receiver and the XB speakers. Audio performance of the MEX-XB100BT is very good, and the internal amplifier actually exceeds the 40-watt rated power number. Signal-to-noise performance is excellent, as is distortion and crosstalk. The three pairs of pre-amp outputs provide over five volts of usable output and a ruler flat frequency response.

As I surmised, the Mega-Bass circuit provides more boost at lower frequencies when the volume is low. As the volume increased, the circuit automatically reduces the amount of boost, and raises the effected frequency. This is a clever and effective method of equalization.

CONCLUSION
Many of us dream about huge systems with multiple amplifiers and all sorts of complicated and expensive gear, but there is a lot to be said for a simple, well executed system with plenty of power and pleasing performance. That’s exactly what the MEX-XB100BT and the XB series speakers are designed for. When used as a system, this simple “deck and four” might be all you ever need for your daily driver. Add in built-in smartphone connectivity and flexibility provided by the SongPal app, and it may also be the only system you ever really want. http://store.sony.com