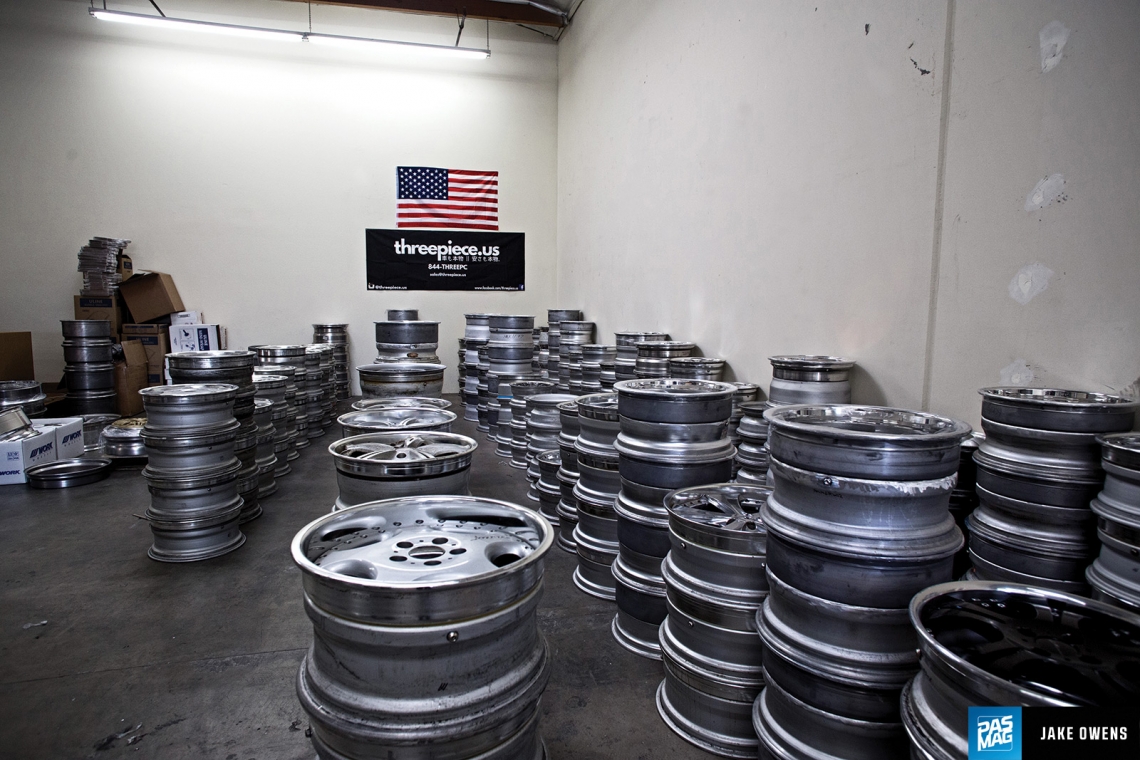 Whether you're aware of it or not, we're in the middle of a renaissance of sorts, and our Michelangelo, Leonardo, and Raphael are WORK, Rays, and SSR. That's right, we're talking glorious Nippon steel (aluminum) here, folks, and only the oldest and most sought after models; all the way from the '70s to the early 2000's.

Before I dove into the fascination with old wheels from an island in the Pacific sea, I'd need a guide that gets their hands dirty with these sought-after rollers on the daily. Thankfully, after giving Jake Owens (El Presidente of Threepiece.us) a shout, he was more than up to the task of talking shop. 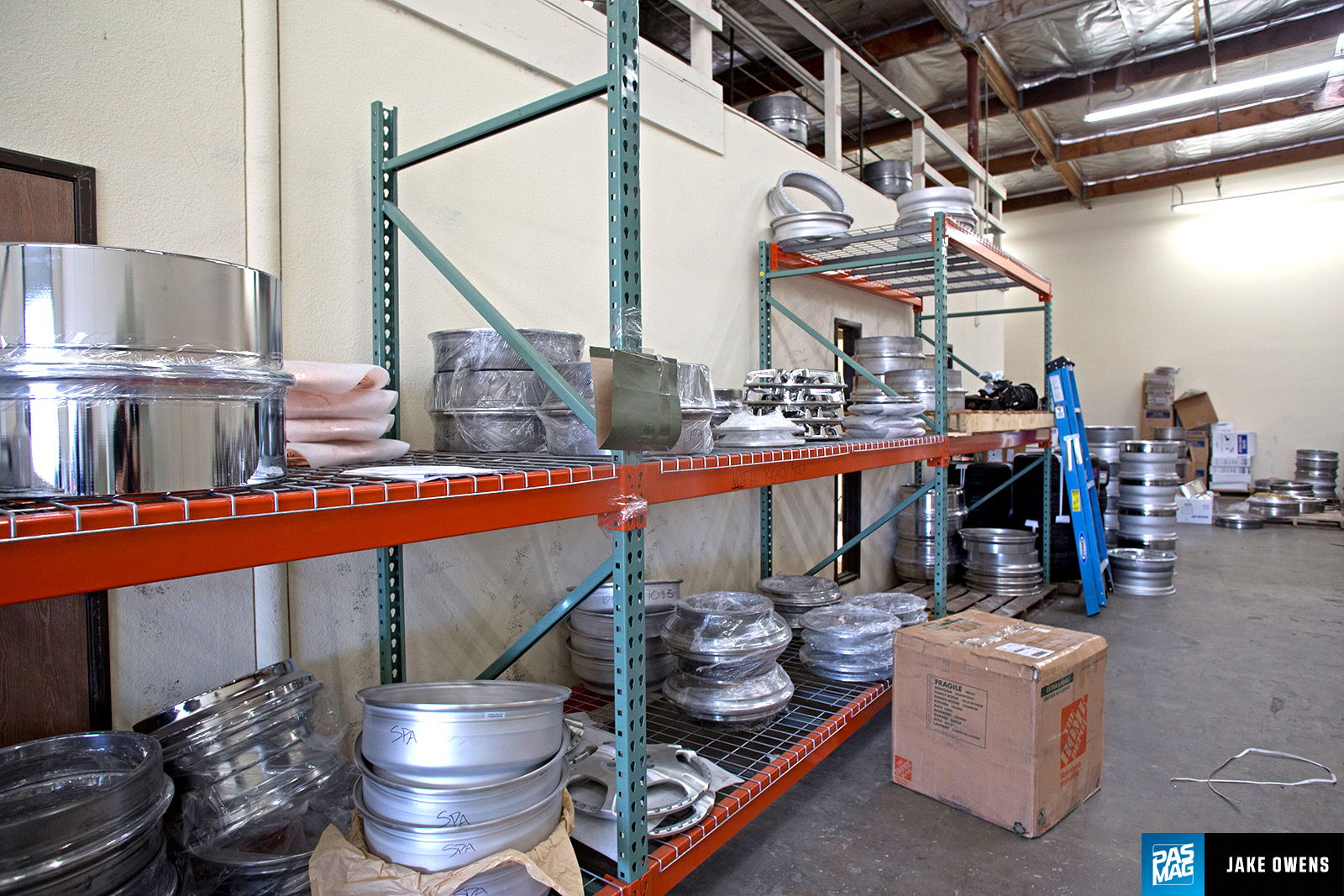 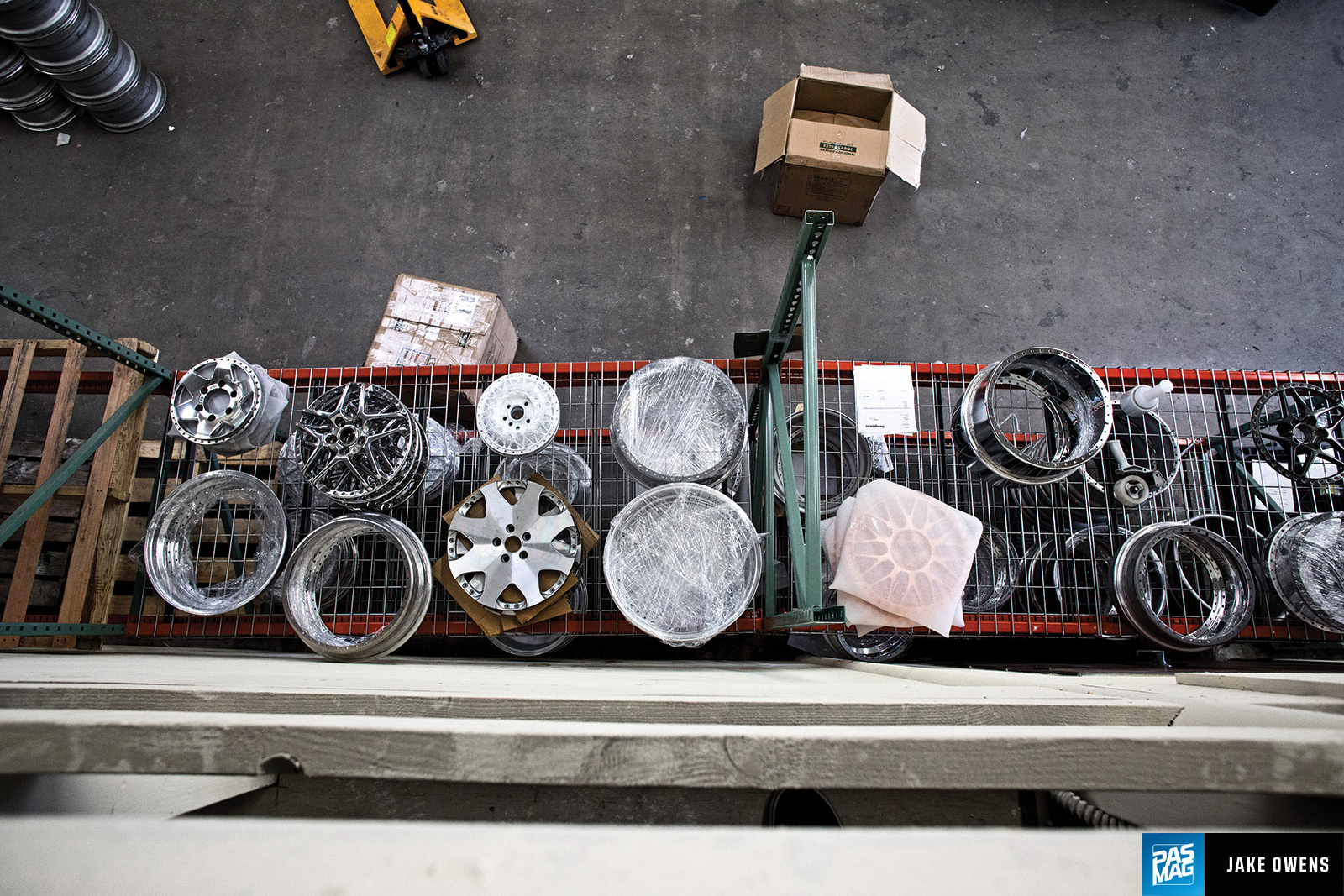 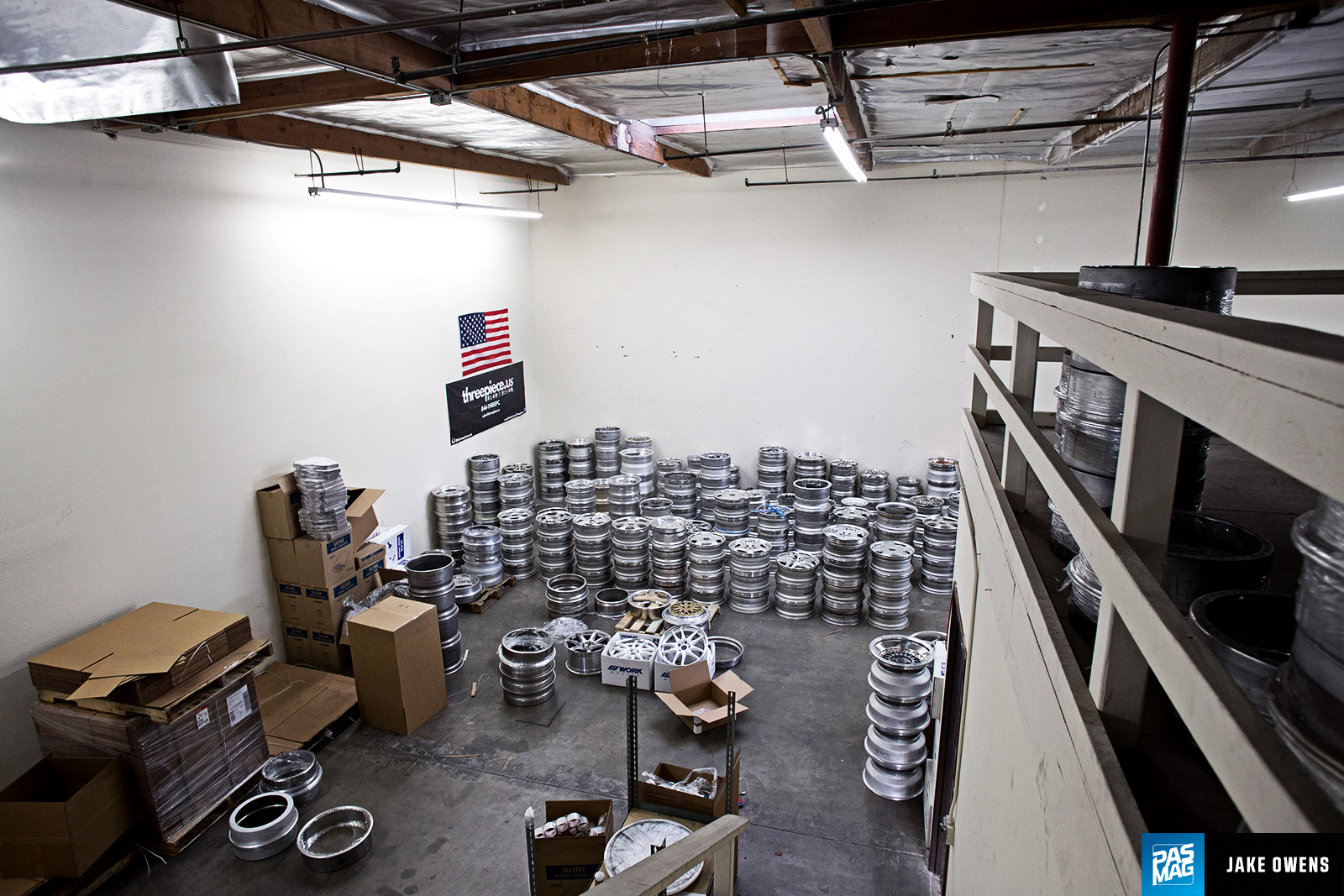 Mr. Owens' wheel fascination started when he would buy old wheels off of Craigslist, which he would then recondition the best he could, before relisting them and making some extra cash. Soon, refinishing wheels (old JDM ones in specific) became more of a passion than a side hustle, and with some solid contacts now made in Japan itself, he opened the doors to Threepiece's first warehouse. Soon outgrowing that, he moved his team to a bigger space, which now receives shipments of 150 to 200 wheels, every couple of months. 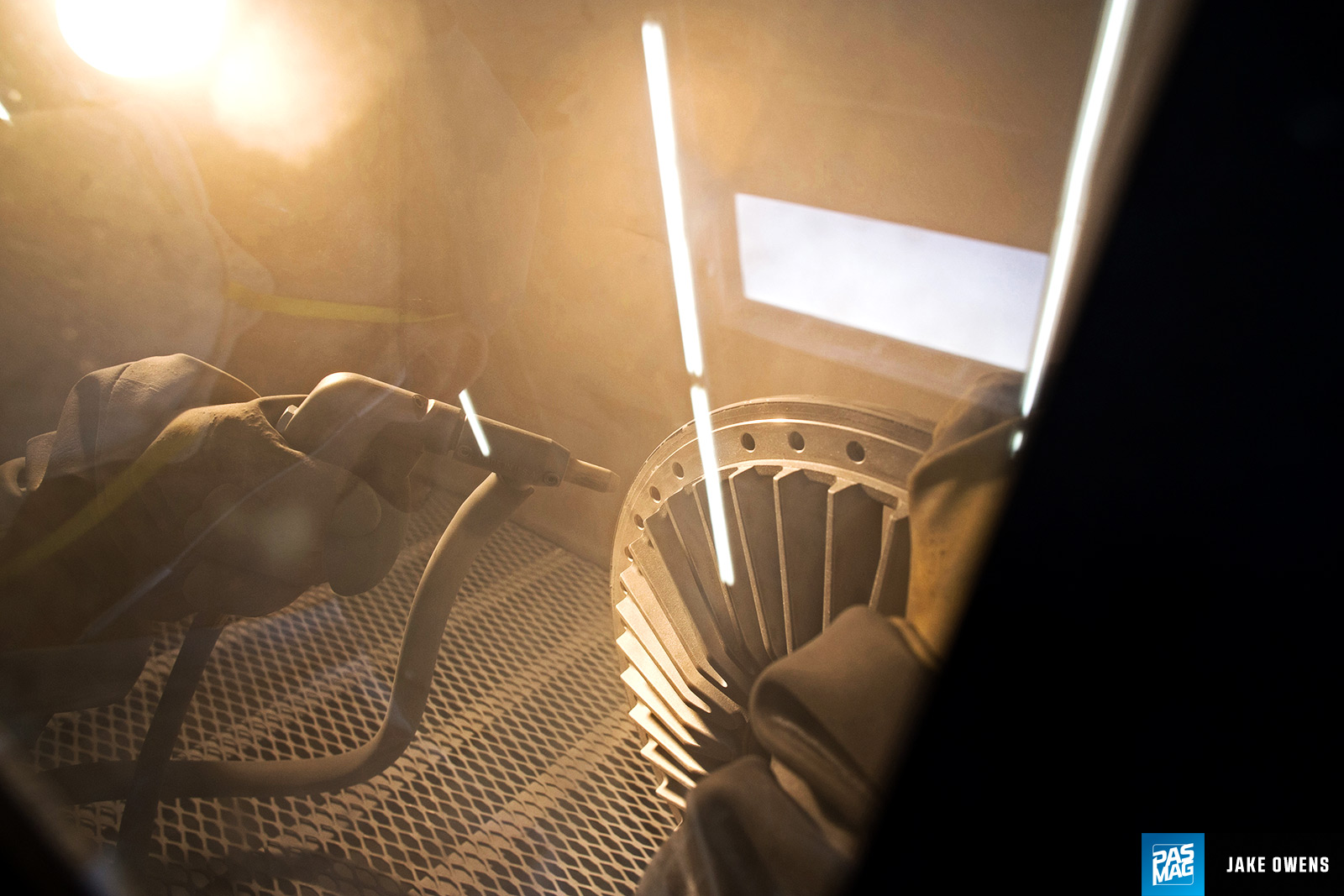 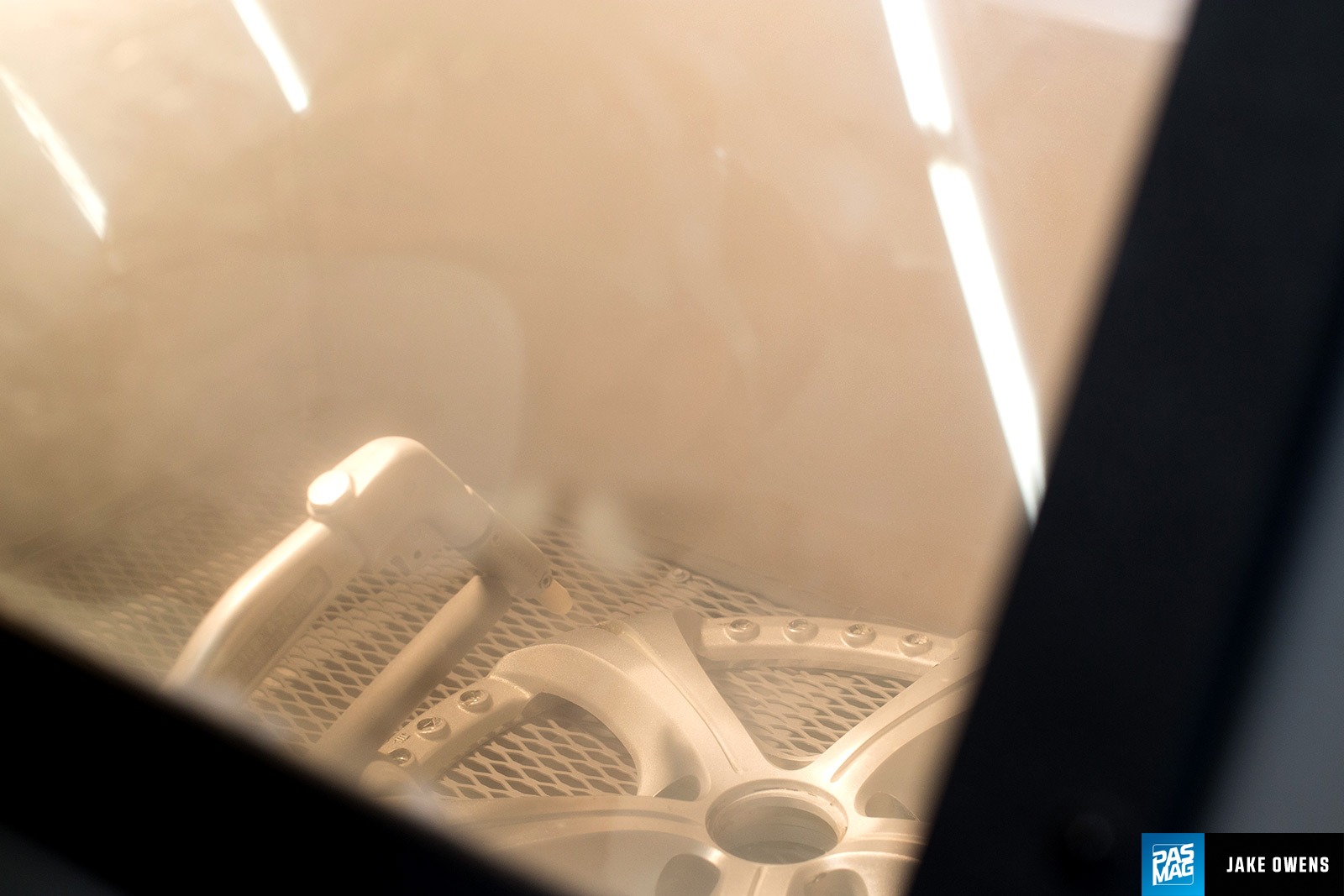 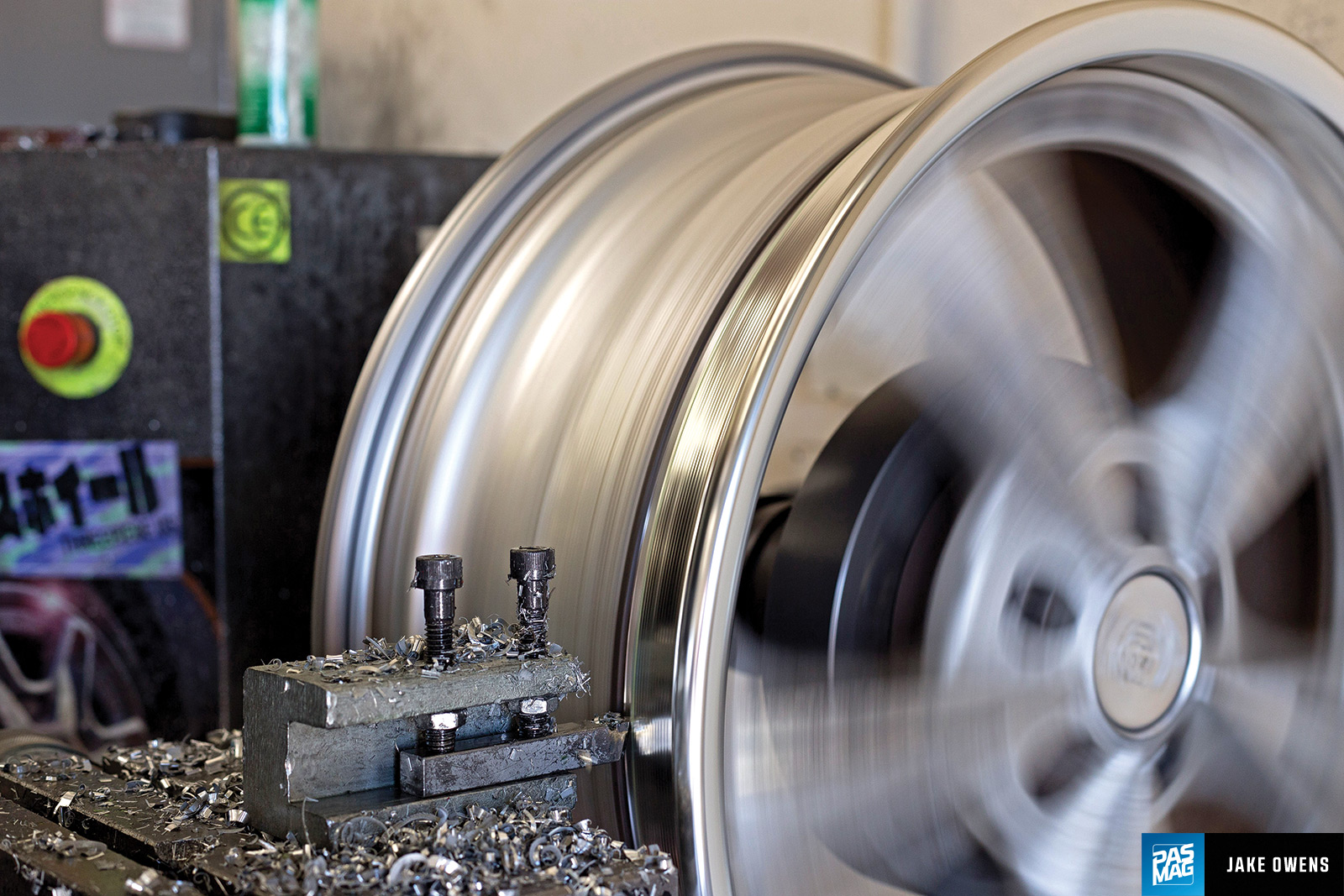 "The bulk of what we do at Threepiece is source, import, refinish, and resell vintage Japanese wheels, as well as manufacture harder to find parts for them, like center caps, lips, barrels, hardware, and all the good stuff you would need to bring your old wheels back to life," says Owens, who has a contender for best job ever.

So, let's get to the meat of the issue here: why is there such a huge market and demand for old Japanese wheels right now? One could argue that a good chunk is the fact that lips are back in like Botox in Hollywood, and a good amount of Japanese wheels were multi-piece way before the trend started sweeping the car nation. Another point would be the fact that Japanese wheel companies were the originators of the designs you know and love today, paired with the fact that they're built with the same quality an over-engineering as a 2JZ. 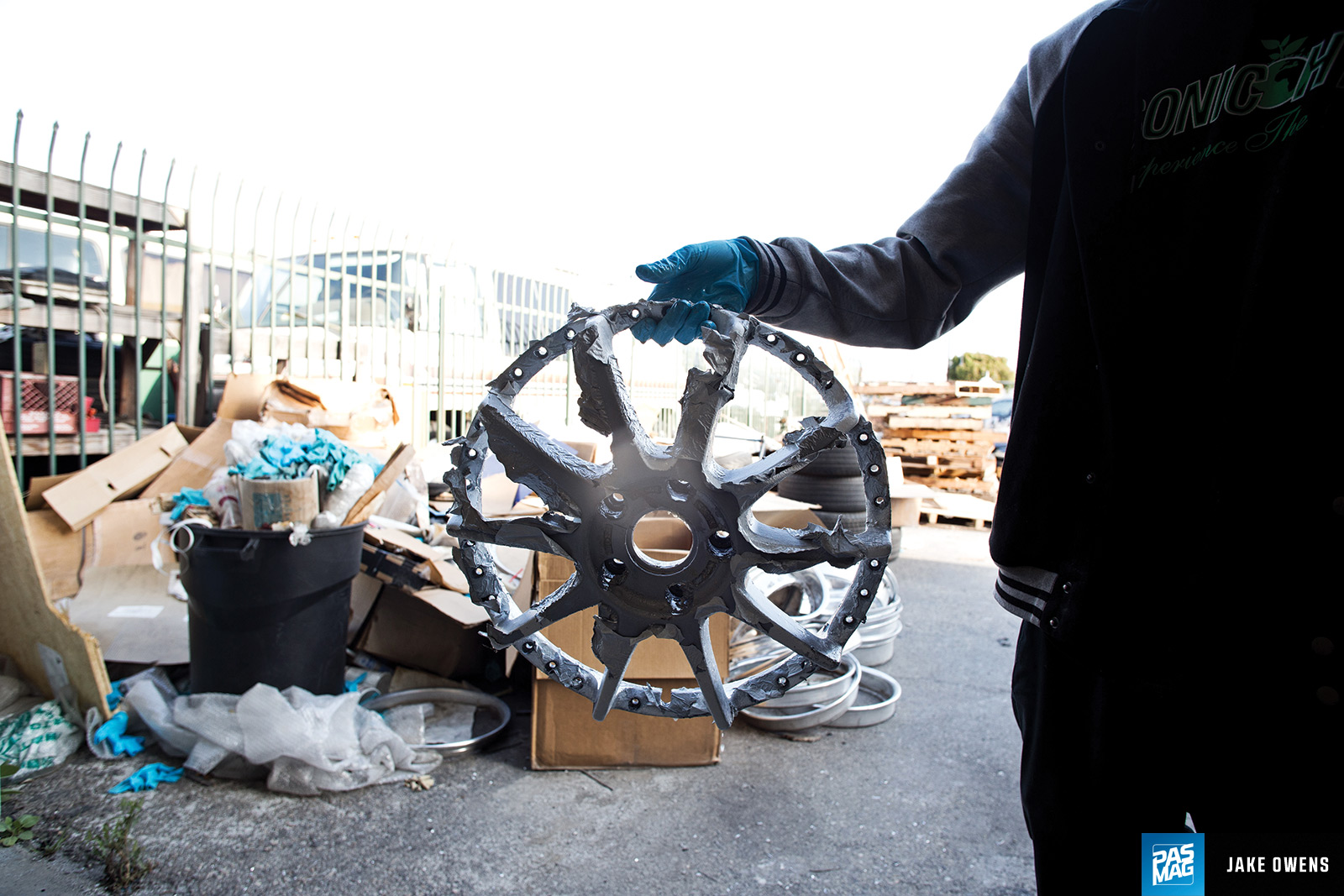 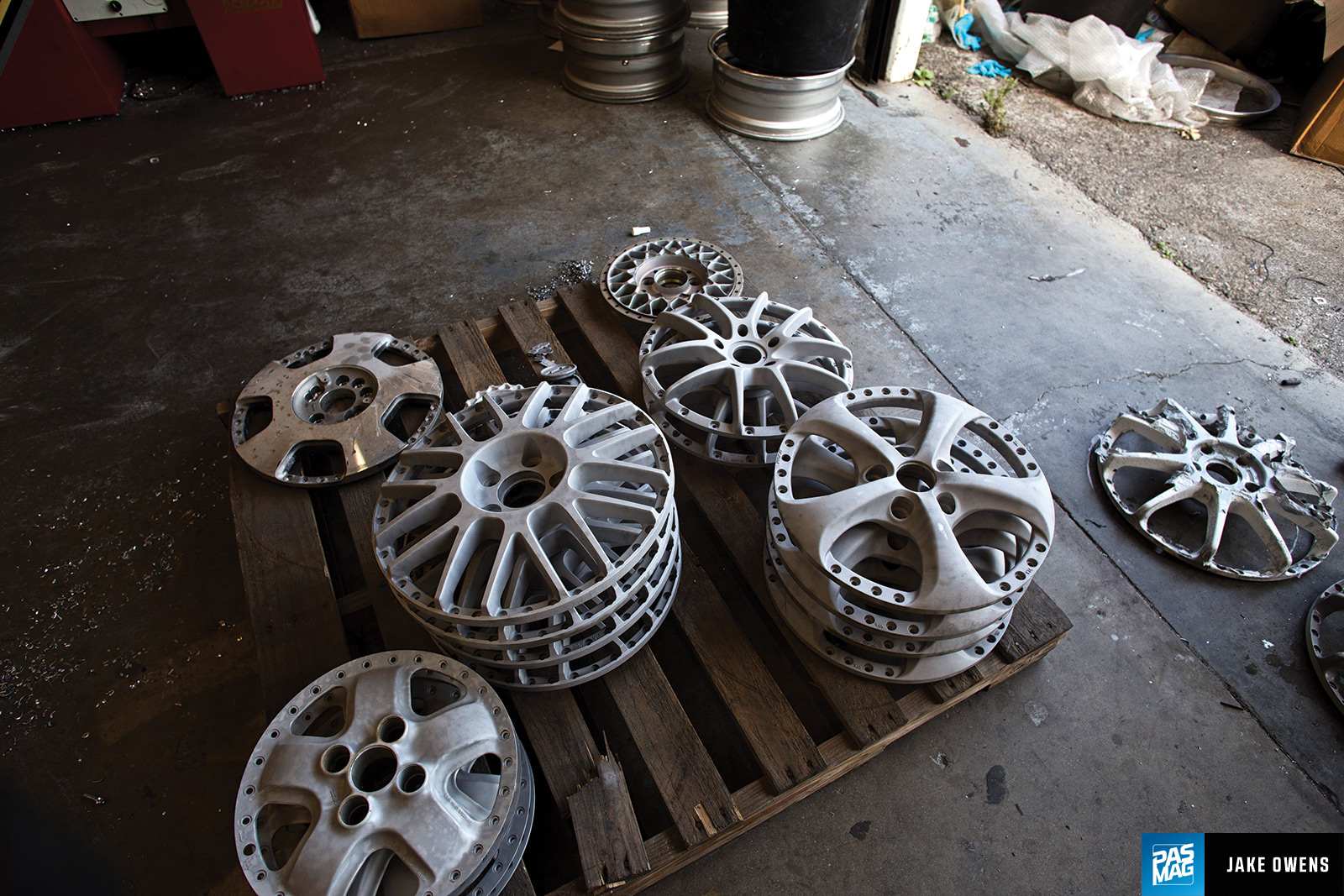 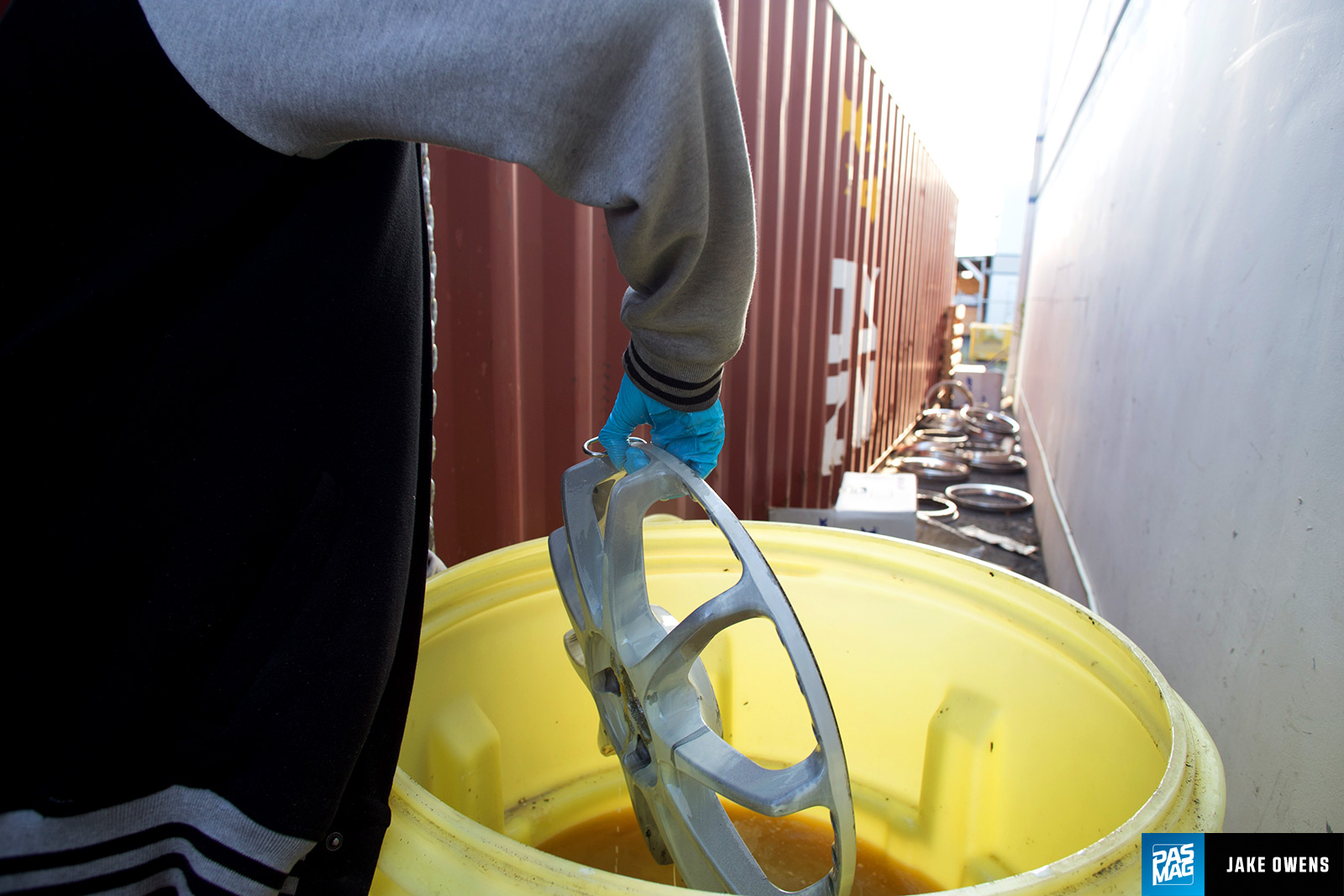 "One reason, I think, is style," says Owens. "A lot of these JDM wheel companies were the first ones to do these styles, so you're not getting something that's been copied and tweaked, over and over again."

"The quality of the product, for sure," he continues. "If it can last 30 years, then you know it's a decent product. What's really a testament to that is not just the faces, but the inner barrel, which is making contact with the most amount of road, most frequently. I would say 90 percent of the inner barrels that come through here are not cracked or bent. I see WORK Wheels coming through here that are older than I am that are still in good shape. We'll do paint stripping on these wheels and the original paint won't come off. That's quality product, there's no way around it." 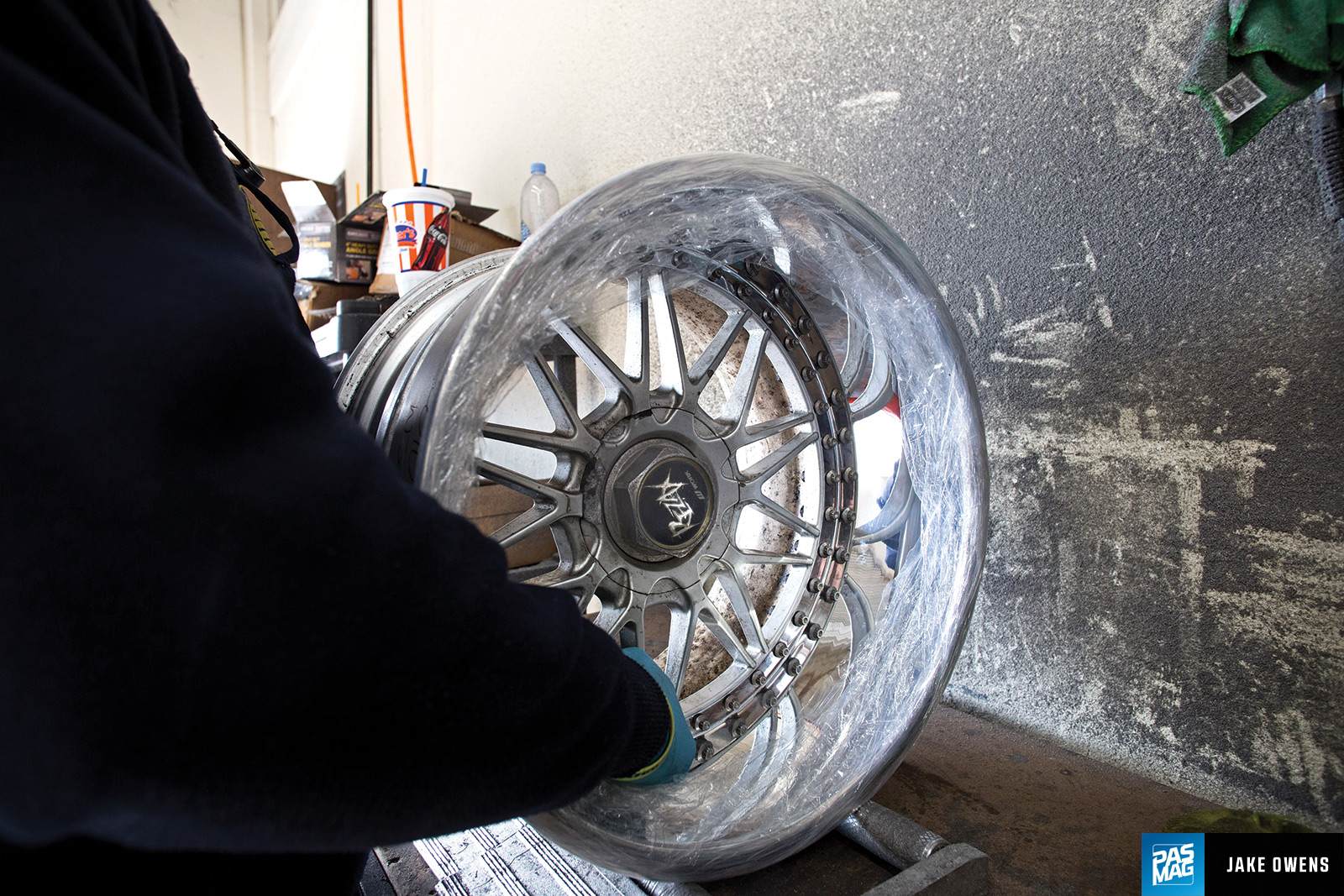 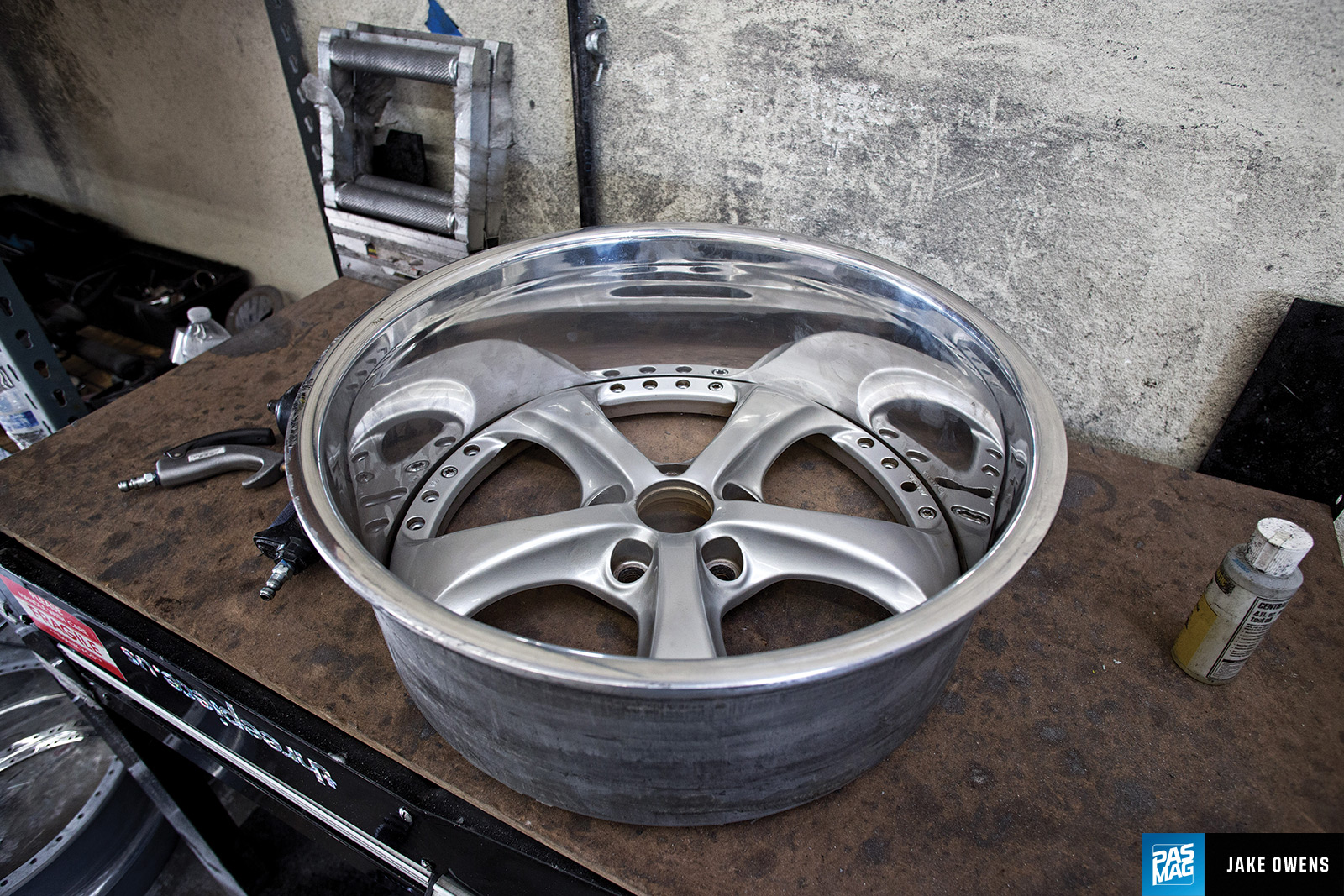 Let's not count out the part of us that wants to replicate the cars of our childhood. Whether we raced them on a game console or saw them get wild on an Option video, we want that black S13 on Blitz 03s.

Speaking of which, Owens lists Blitz's 03 as their most popular wheel - something that's driving up their market value and making a set that's worth chucking on a boat over here less and less likely to come across. 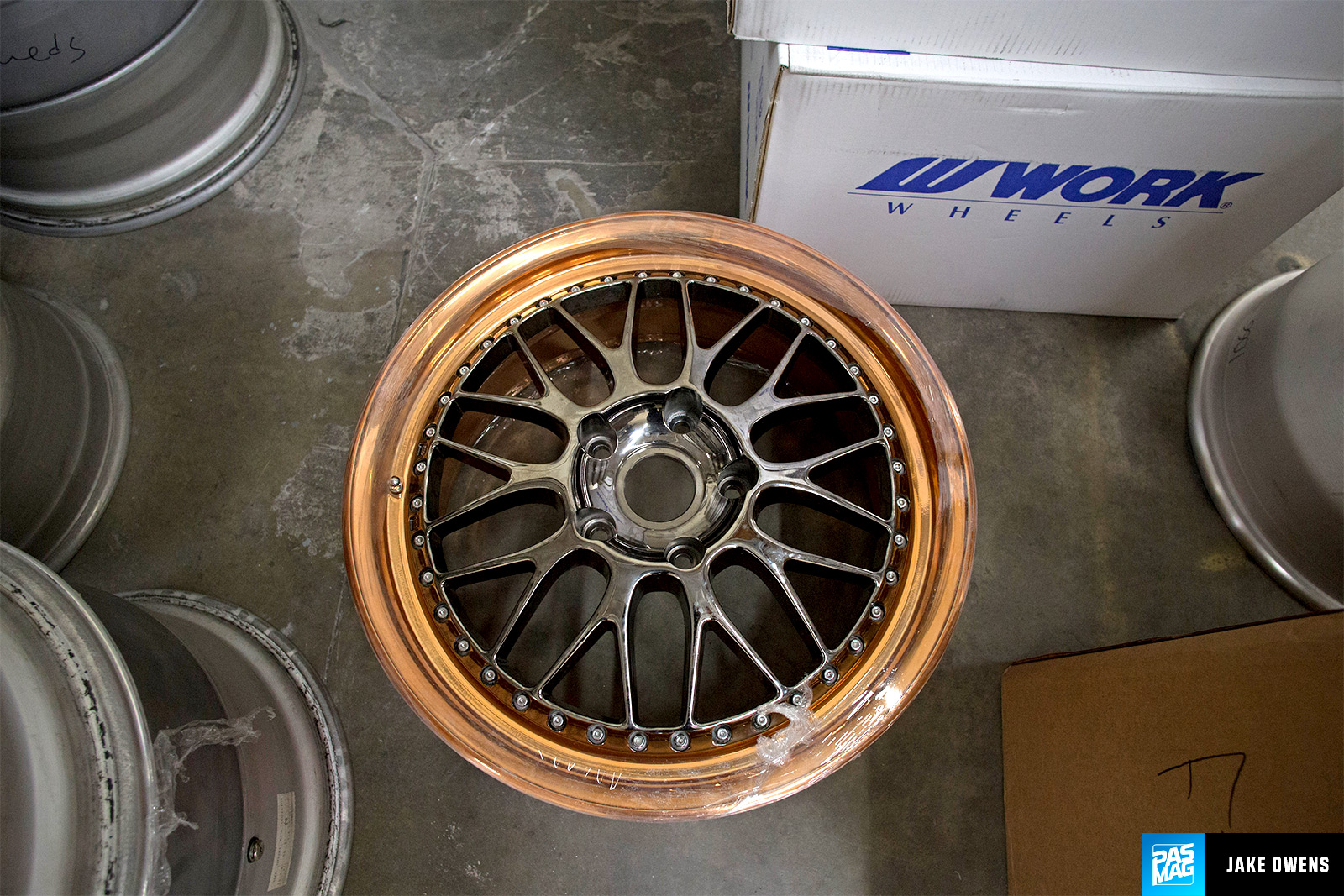 "There are five or six models that are really popular, but Blitz 03s are the ones we're getting phone calls about every day," he chuckles. "At this point, it's pretty much impossible to get them. They've become all but non-existent. At my wholesale cost, and I have no problem putting this out there, I'm spending $1,500 to $1,700 on a set of non-refinished, old, beat up, 17-inch Blitz 03s. By the time you bring them over here, doing the new lips, refinishing, etcetera - we're competitively priced, but it still all costs money - you're flirting with $3,000 to $3,200 for a set. The Blitz 03 was one of those wheels that really drove the creation of Heritage." [see sidebar at bottom]

Now, some of you may be recoiling after seeing costs like this, but such is the price tag on an item that's finite and in high demand. Just look at the costs of GT-Rs coming out of Japan; same deal. Isn't being a JDM enthusiast great? But just like you can get a less popular model of car out of Japan for a more agreeable price, the same is true of wheels. 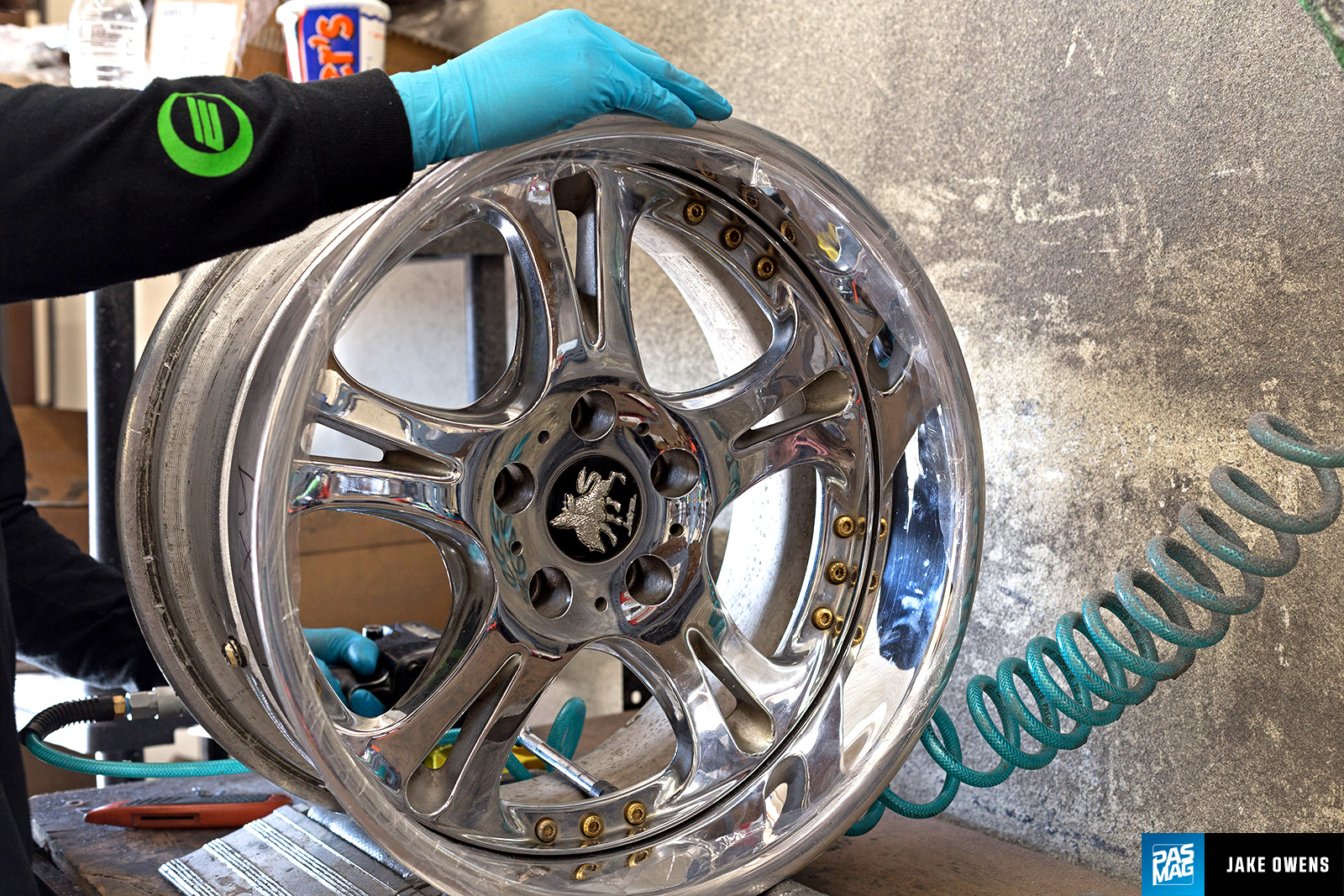 "With the more desirable models, there's a certain price tag that accompanies buying a set of VSXXs, Blitz 03s, or something like that, whereas you can get something lesser known, like Riversides or ABC Exclusives, for $1,500 to $1,600 out the door," Owens advises. "If you ditch some of the refinishing options, there are at least a dozen sets that I'm looking at right now in my warehouse for under $1,000."

"Check out some of those wheel models that maybe some other people aren't doing," he advises further. "The one time this gets a little tired is when we're doing six sets of the same wheel in the same color scheme because someone saw it once. There's a lot more out there that can be executed really well and look really cool if you have that vision of what you want to do. Definitely still check out what your friends have on their cars and what you see on Instagram that looks super sick, but also check out some of those lesser known models - you're going to get a really good deal, and get a really cool looking product." 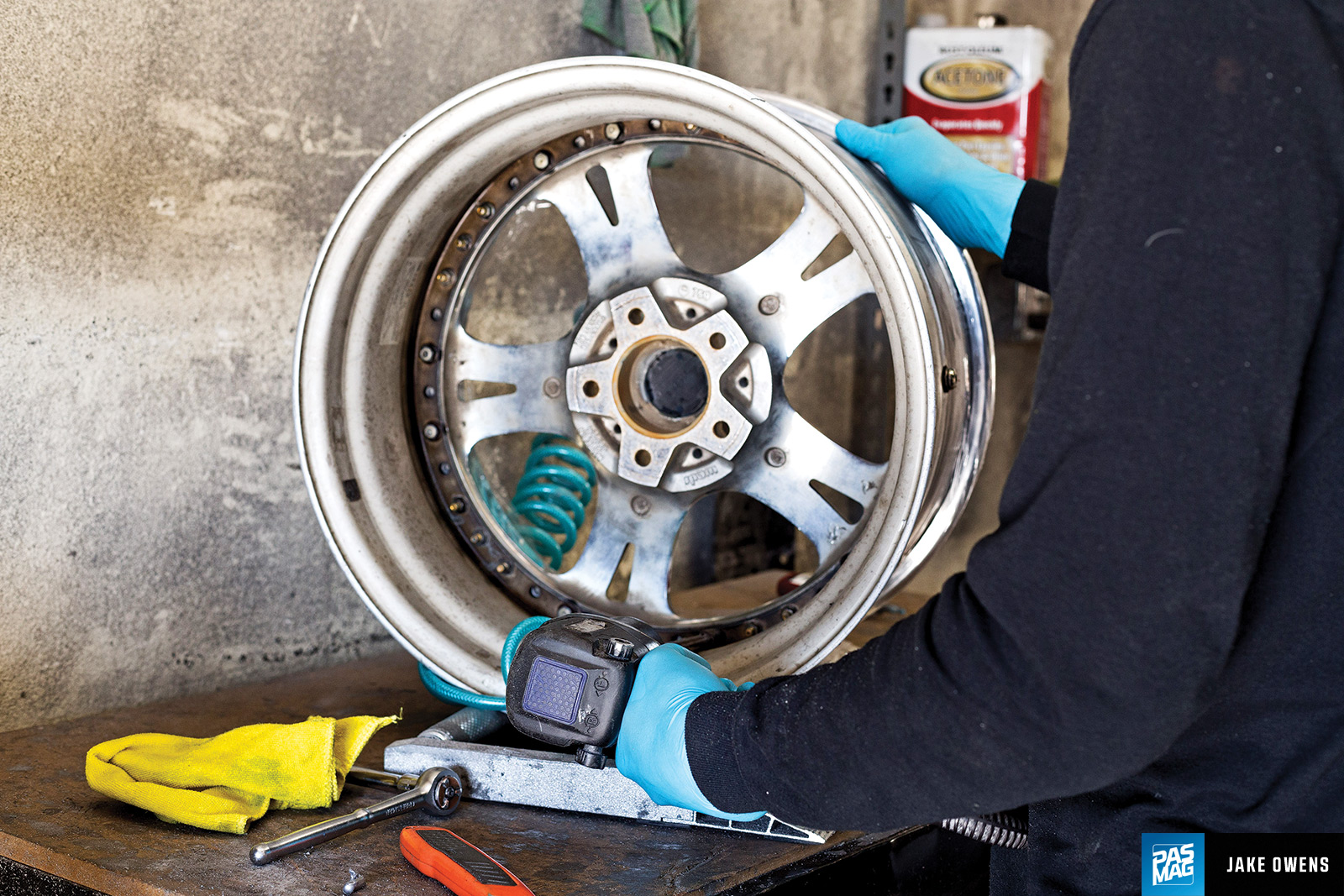 If anyone can bring your vision to life, it's Threepiece. Offering what they call a "standard refinish," or "bring your wheels back to life package," which usually comprises of four new lips, powdercoated centers, and some new hardware. Beyond that, more extensively, the crew at Threepiece can handle three-piece conversions of non-multi-piece wheels, custom step lip, full re-lip, and re-barrel, plus just about any finish. As Owens puts it, "If you've seen it somewhere before, we can do it."

These days, $1,000 to $1,500 isn't far off from a lot of the replica sets that we see bolted on cars, so the excuse gap to run something un-authentic gets smaller - plus it saves you from being the butt of jokes made by wheel advocacy groups and blogs online. While we're on the topic, what is an authentic wheel anyway? There are so many wheel companies around these days that lines are a little blurred. Owens has his own view on things real and fake. 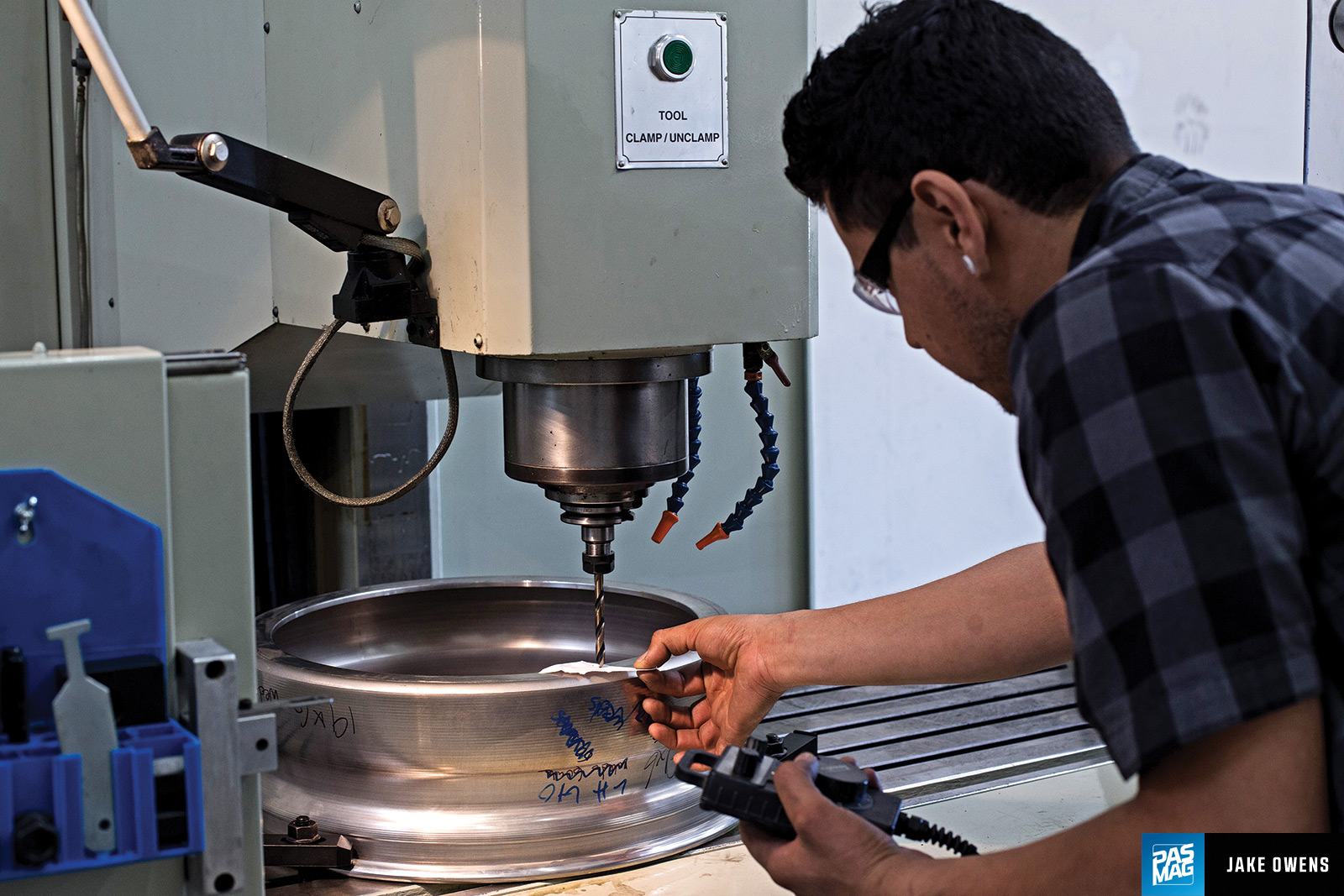 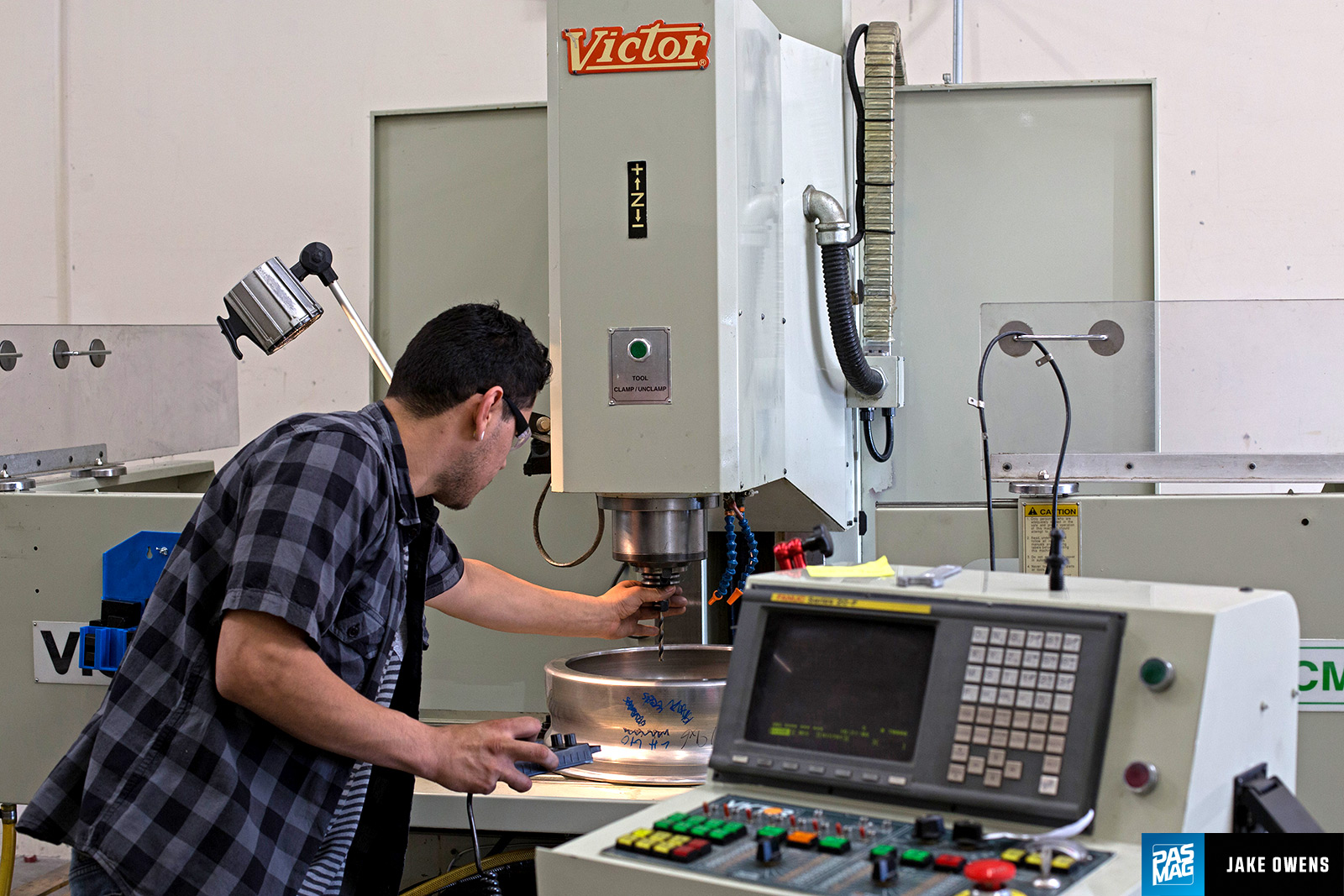 "It's a hot button issue," he says. "Like, are BBS LMs WORK VSXX reps? It's become almost trendy to talk shit. If something is a direct copy with nothing changed, that's a replica to me. If you were to take a monoblock and make a three-piece variant, or if you were to take an existing design and alter the shape of the spoke, or the lug area, or something like that, so it's recognizable as your own unique design, I feel that can be authentic. I think a lot of what comes with it is who's making it and what they embody. If you're buying a quality multi-piece or one-piece forged product, there are only so many designs. Everyone has heard that adage of 'Hollywood makes seven movies and they make them over and over again.' It's the same thing with wheels; there are only so many core structures of a wheel. You can only change so much before you push the limits of what is safe and what the actual wheels can take. It comes down to how you've deviated from the style of these acceptable variants."

As far as reps are concerned though, Owens has a surprisingly understanding tone. 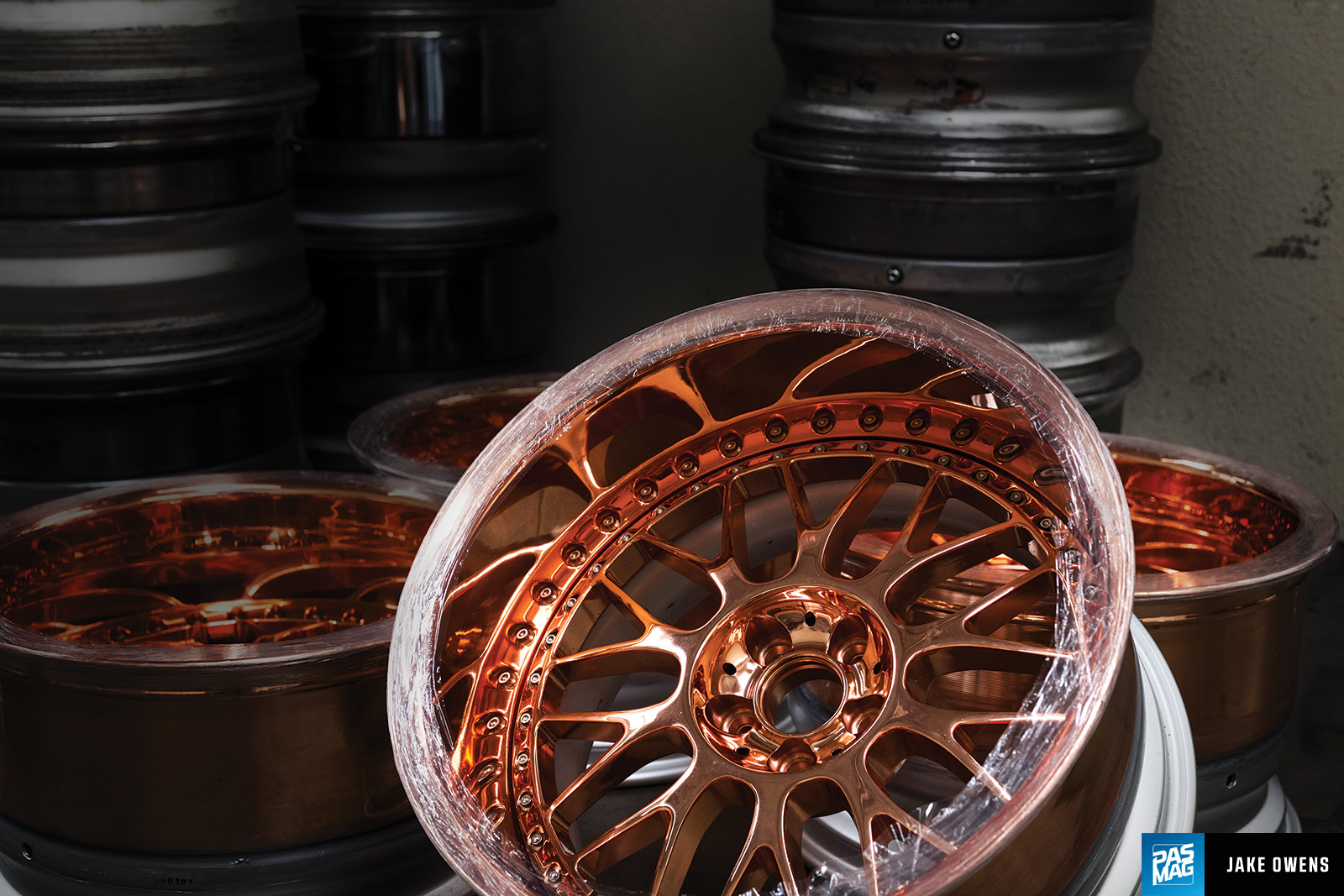 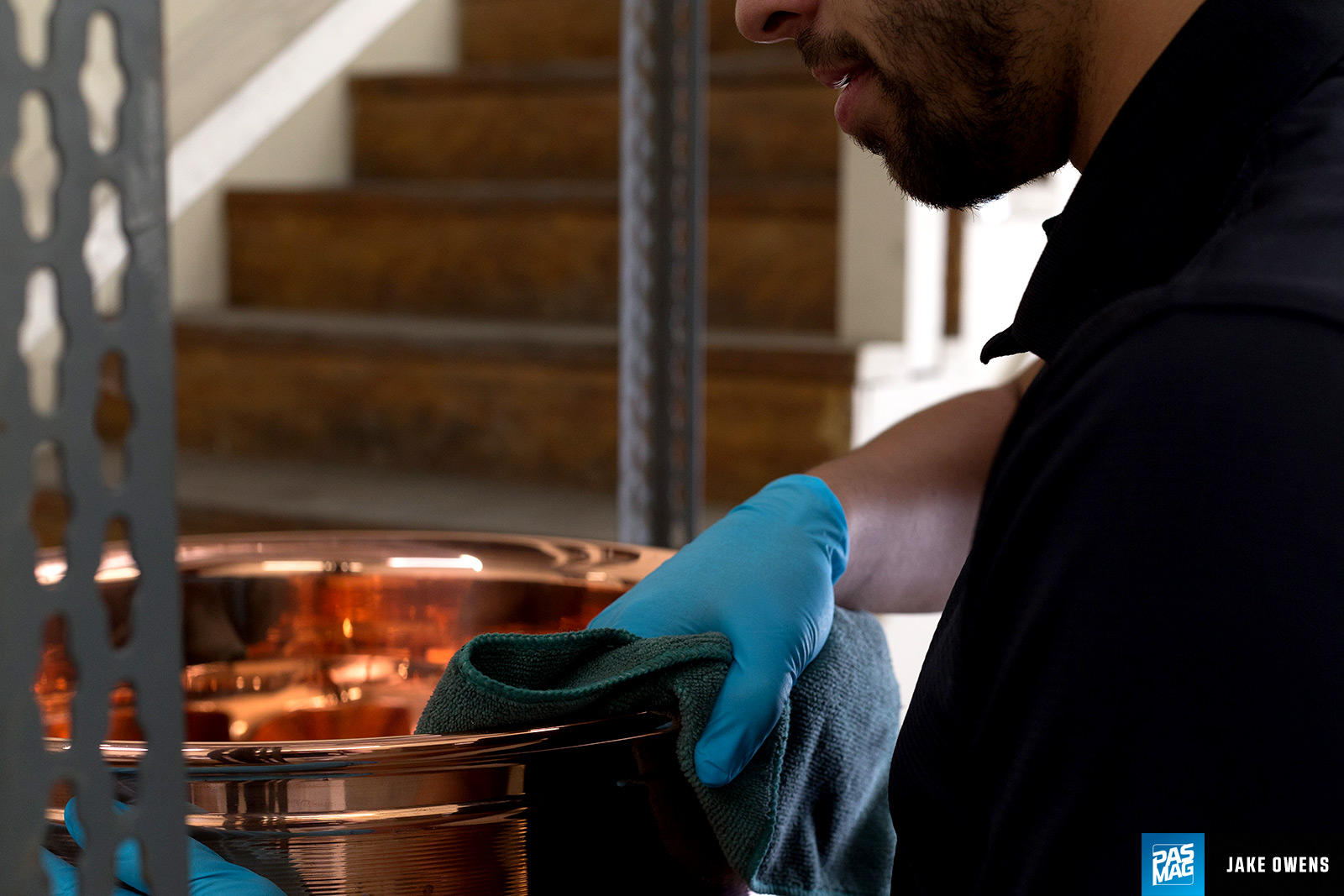 "I think that anything that gets people into cars is a good thing," he explains. "I mean, I remember when I was 16 and I didn't know about authentic wheels, so I bought some wheels off Ebay and thought I was really cool. As things went on, I learned that they're obviously not a high-quality product, but I do feel that they have their place. For guys competing in grassroots drift series that don't have the excess capital to spend on a skid of authentic wheels, I completely understand that. For a kid who just turned 16 and wants to start modding their car, I get it. The biggest problem I have is that it leads people to this culture of instant gratification. A lot of people aren't willing to buy a set of wheels that are authentic and throw them on their car to drive around for three months while they save up to buy some lips, and then send them back for refinishing. It's Instagram culture; they want to be able to post up their sick car right now."

While that debate will probably rage on for a lifetime, the up-trend of demand for Japanese wheels from the heydays of car tuning seems to want to follow suit. Even if this renaissance fizzles out, Owens reckons we could see another resurgence later on in life. 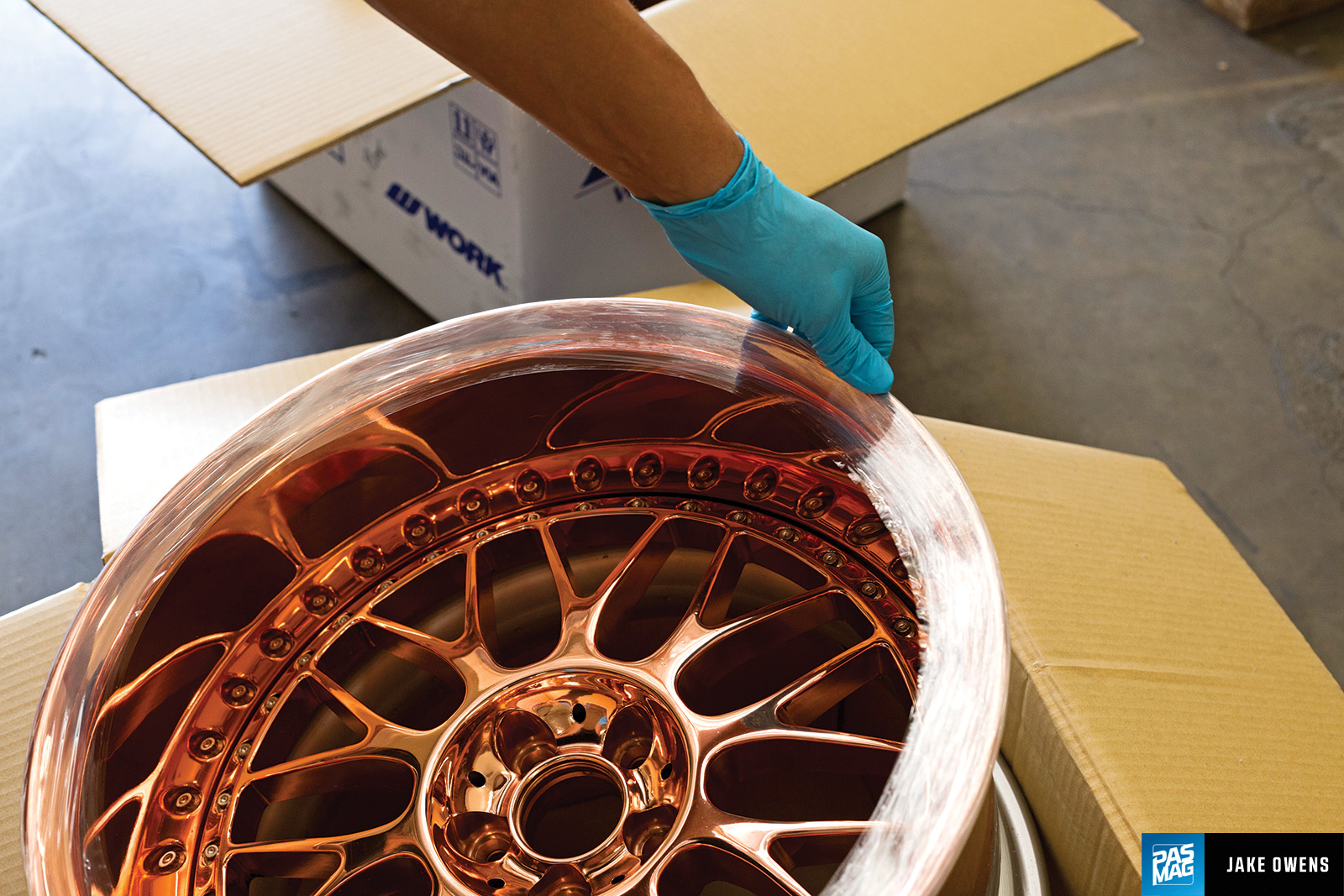 "Right now, we're kind of at a peak for it," he says assuredly. "Japanese '90s nostalgia is a huge thing, especially among kids of my generation, who were too young to have these cars in the '90s, but now we're driving FDs, Supras, S13s, and S14s - stuff we'd see in video games and movies back then. I think we'll see that taper off a little bit as this generation gets a little older, buys houses, and more mature cars, but I fully believe that there will be a resurgence similar to how the baby boomers are restoring their Chevelles and Camaros. I have no doubt that in 30 years we'll see restored S15s and R32s. I fully expect to see a resurgence, and maybe even see it surpass where it is now in 10 or 15 years." 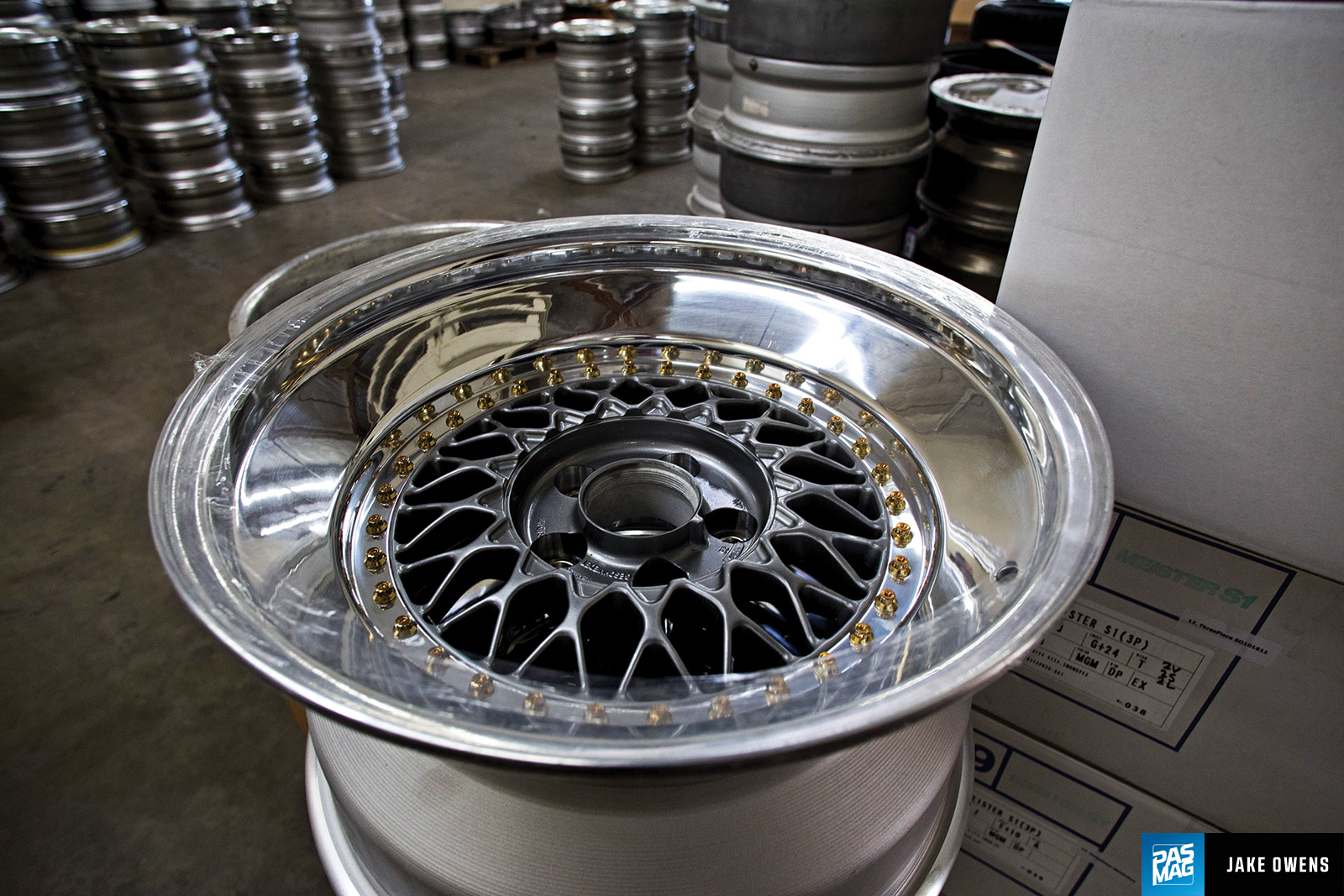 Say you love a certain JDM wheel design that's way out of your budget, you own a car with a bolt pattern that's not readily available in older JDM wheels, or you just don't want to go through all the adaptation pains of getting a wheel to work on your car, Threepiece offers an option in Heritage Wheel. Heritage was born out of the demand for wheels that are almost impossible to find, or almost impossible to find within spec. 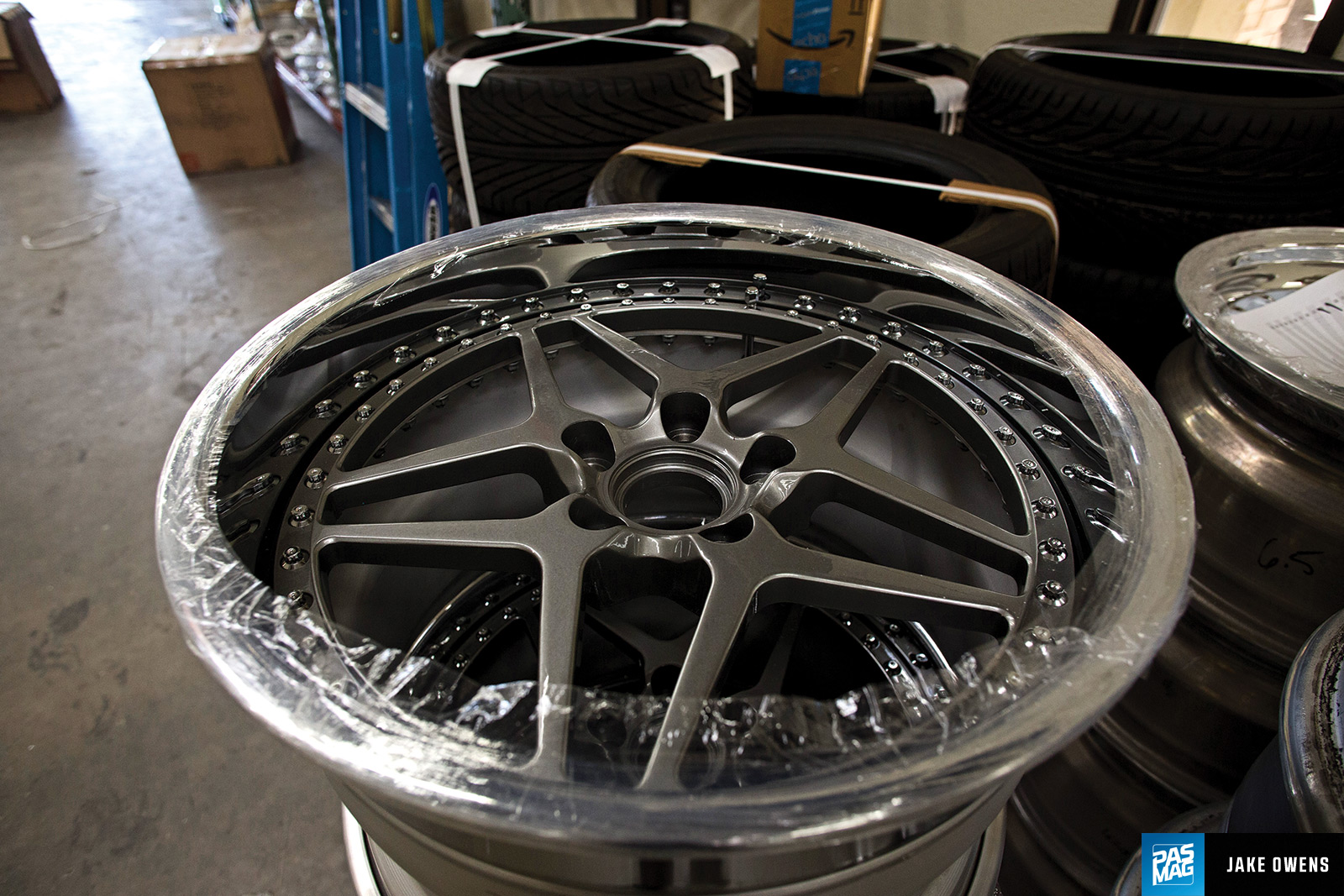 "When you look at the Heritage models, there's no denying that they do come from some of the older Japanese wheels, but we wanted to reimagine them in such a way that it's going to fit on whatever vehicle you choose," Owens explains. "For the customer that's not dead-set on the brand name, this gives them the opportunity to still have a quality, forged, multi-piece wheel in a similar spoke-style and design to what they want."

You can see familiar designs in the Heritage offerings, like Blitz 03s in the "Ebisu," or WORK Equip 05s in the "Suzuka." There are even three-spoke and super-mesh designs if that's more your style. 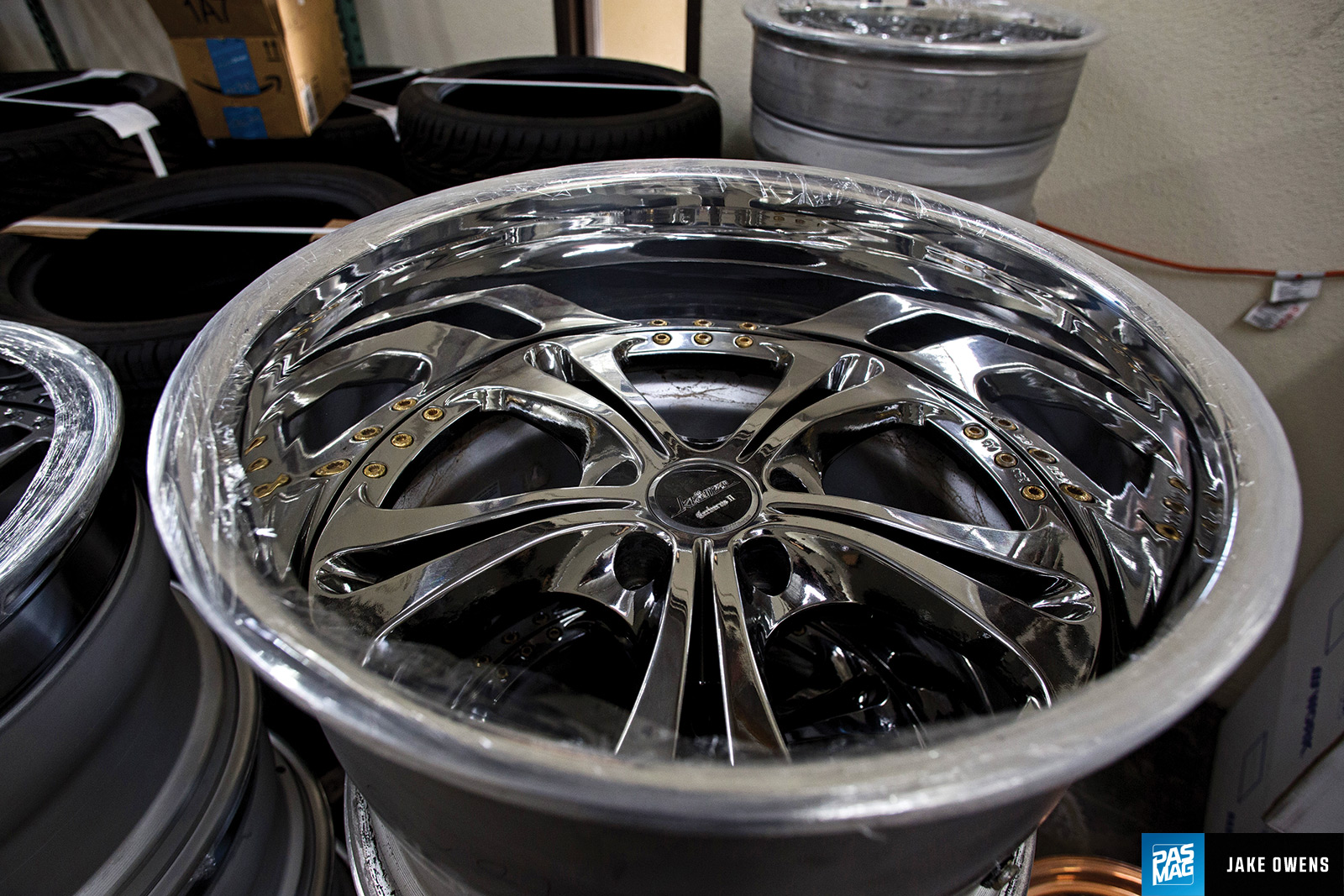 If you go to HeritageWheel.com, you can choose the wheel model you're after, enter the specs you want for your car, choose your construction and finish, get a quote, and after a nail-biting wait, receive a brand-new set of wheels, fit specifically to your car, built 100-percent in Cali, with a whole lot of Japanese spirit.