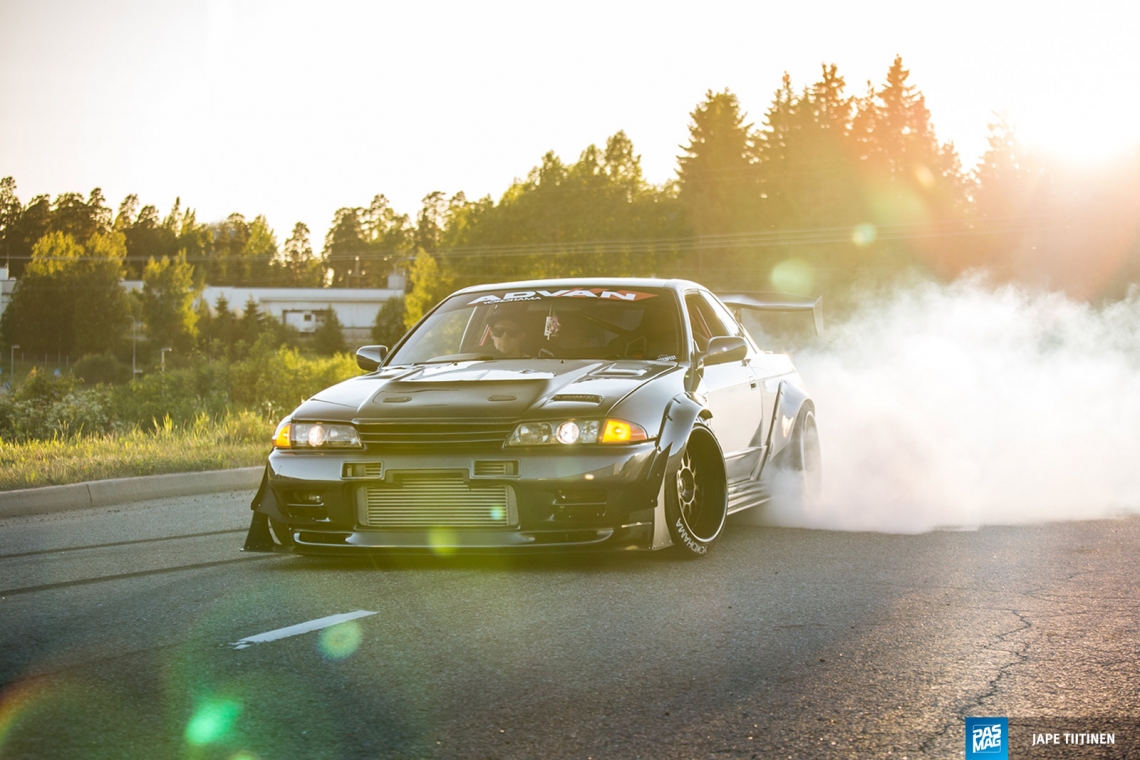 Tony Hakku's car hobby started early in his life, and with mostly Hondas under the knife, there was also room for American cars and a couple Volkswagens. “These rides were nice, but nothing compared to my childhood dream car - the Nissan R32 GT-R, he states. When the time was ripe and with a rising car fever, Hakku suddenly noticed that he was already chatting online with the owner of a grey R32 specimen, that already had been spiced up quite a bit. When they were done talking about the additional details, "I was already on my way to Kärkölä to test drive the Skyline," he mentions.

Hakku arrived at the owner’s driveway and got a first glimpse at the car. "The car looked good although the current Super Advan 3 spoke rims and the color differences on the doors compared to the chassis didn’t impress me too much," he remembers. He took his time to circle around the car until it was time to take a nosedive under the hood. As he was admiring the big turbocharger beside the RB26 engine, the owner stated that the setup makes 650 horsepower to the wheels. They went for a test ride; Hakku in the passenger’s seat as per the the seller's wish. After a few good pulls with some decent boost, Hakku decided to seal the deal with a half-meter wide smile on his face. "Next up, I went to the bank to get some money and took the car home," he expressed. For the next couple weeks, he cruised around and enjoyed his newly purchased Skyline until it was time to start building. 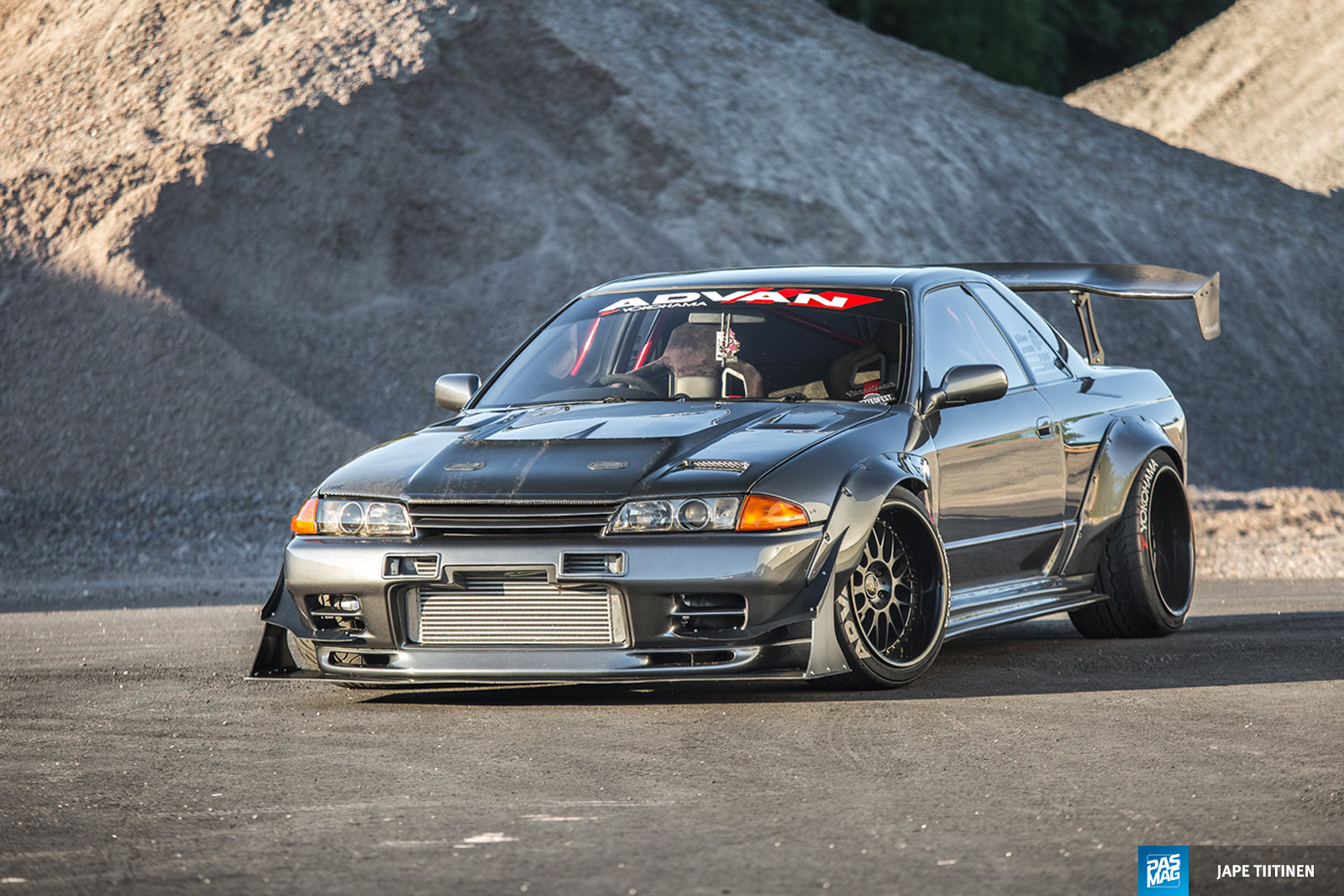 While planning the wheels for the Skyline, Hakku noticed bad rolling-work on the rear fenders and found out that there was also rust. At this point, ideas started flowing in his head and it was at that moment that he got the idea to start building a Rocket Bunny R32 since he's never seen it done before! The rust would be chopped off in the process to make larger wheelbases but there was only one issue left. "There were no fender flare kits available for this car," he expresses, "and I decided to go with Nissan S13-series with the thought that if they don’t fit at all, I can sell them to someone else." After he ordered the S13 fender flare kit it was time to start hunting for the wheels that met his demands. "I went looking online for 3-piece 18-inch rims and it didn’t take me long to find wheels that would be perfect for the car," Hakku states. What he found was set of used Work VSXX wheels, 8.5x18-inch in sizing. "They would need some restoration since they were in bad shape," he mentions. Reassembly of the wheels was also unavoidable since the wheelbases would have to filled with wide wheels. "I was going with very ambitious fender flares, so I went ahead and ordered 4.5- and 5.5-inch lips for my rims from Wheelbase.”

Utilizing the Rocket Bunny flares for an S13, Hakku was able to custom make his own version of a widebody kit for the R32. "I noticed that the flares would not fit at all on the GT-R’s curvy chassis," he mentions, "but I would not give up on them just yet." With cutting and shaping the fender flares slowly started finding their place on the car. "For the final touch, I had to gather some courage to cut in to the GT-R’s original fenders." It took Hakky a month to gather the courage to cut the original fenders, "I didn’t regret it a bit," he expresses. "My father was kind enough to weld my fenders as a finishing touch.” 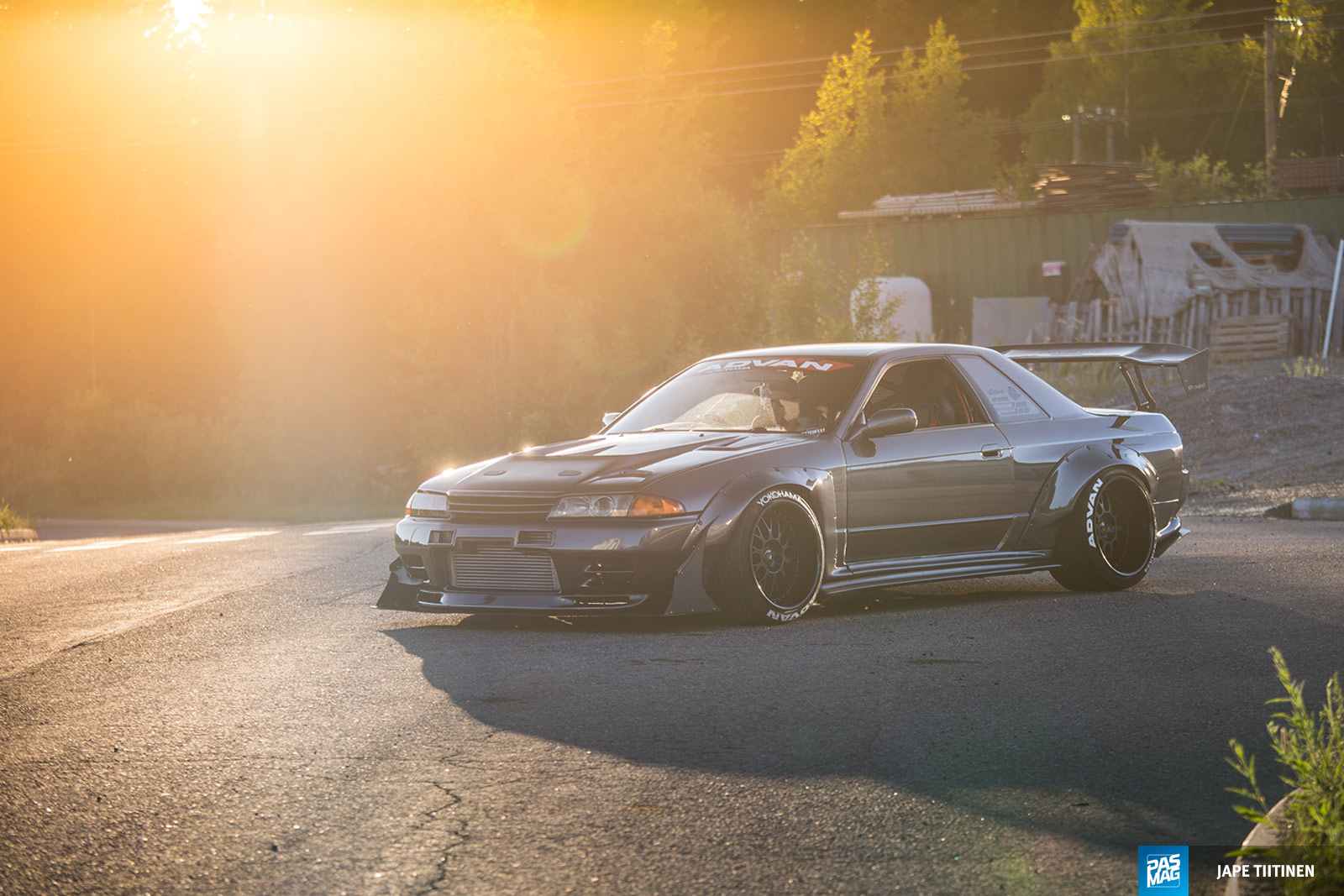 The wheel and tire combo Hakku arranged for the GT-R were a perfect fit! The wheels were pulvercoated. The centerpieces got painted satin black and the lips glossy black. With all the dark colors Hakku thought that they would need some contrast. "The Work centerpiece caps were gold colored, so I ordered golden bolts also," he states. A race-look was desired for the car, so a set of Advan Neova tires were chosen in sizes 255/35 and 295/30 with a nice unique pattern. Hakku also bought white Advan tire stickers to spice up the integrity. While fitting the wheels and tires to the GT-R, the specifications didn't quite add up and the wheels were buried deep in to the wheelbase. "I had to order custom-made 30mm and 40mm spacers from a local company called Kaarinan TR työstö," he mentions. 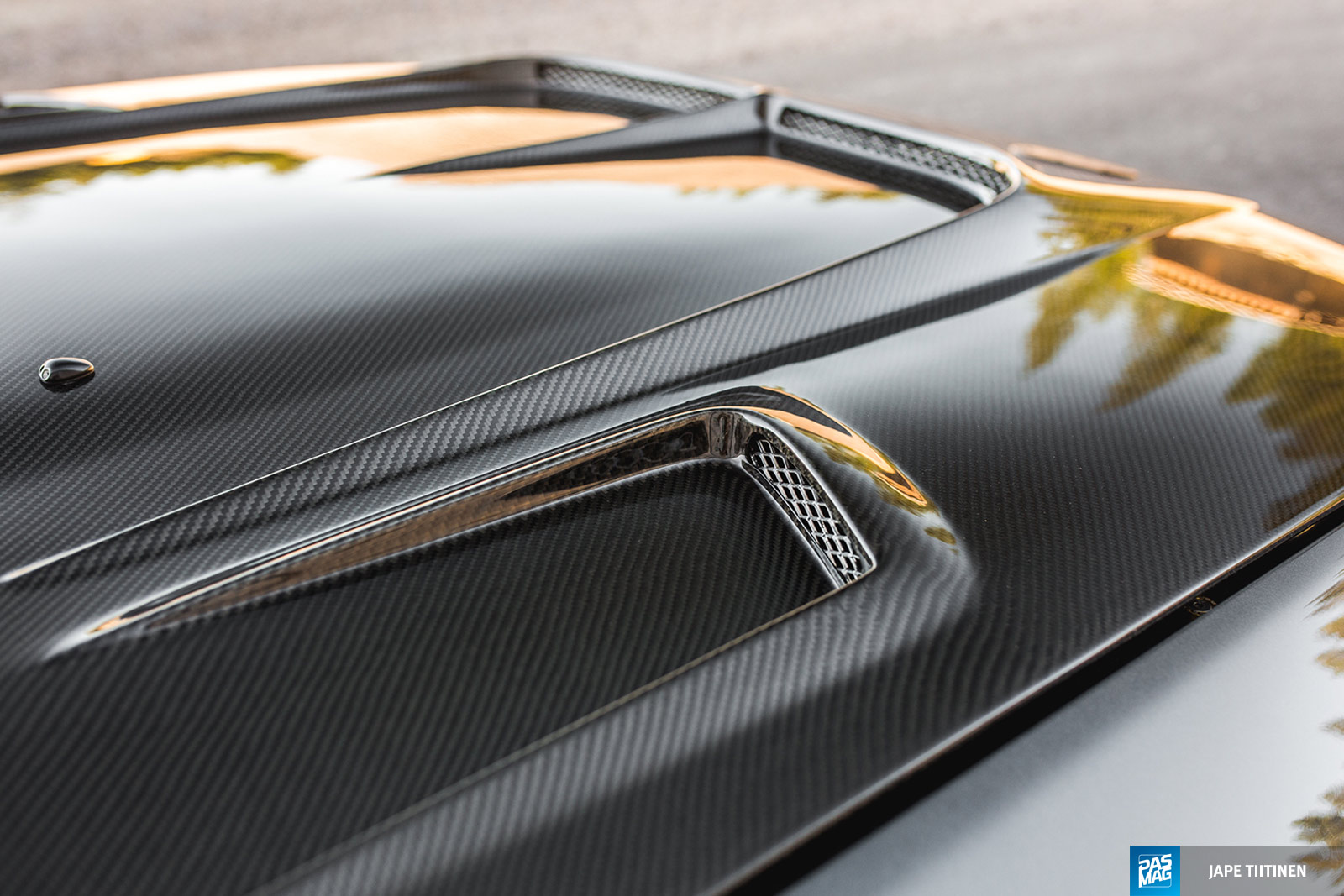 Hakku also installed a Seibon carbon fiber vented hood to improve both cooling and style. At his first ever show with the car, Hakku took home an award, but he wasn’t done yet. After that show, Hakku sourced a roll cage, and then got to designing custom chassis mounts for a new Street Faction wing. "I wanted the car stand out of the crowd," he states, "and my girlfriend’s brother made drawings for water cutting." They were cut and it was once again time for pulvercoating. As for the finishing touch, they made a cross-support between the mounts.

With some Nismo side skirts added, the look he was after had finally come to fruition. Between the high-powered RB26DETT, and all of the carefully selected and fabricated parts inside and out, Hakku’s R32 GT-R is truly one-of-a-kind. We're looking forward to catching up with Hakku in the near future; he plans to make the car run on ethanol, and after an engine rebuild takes place, a clean up in the engine bay will justify a reshoot! 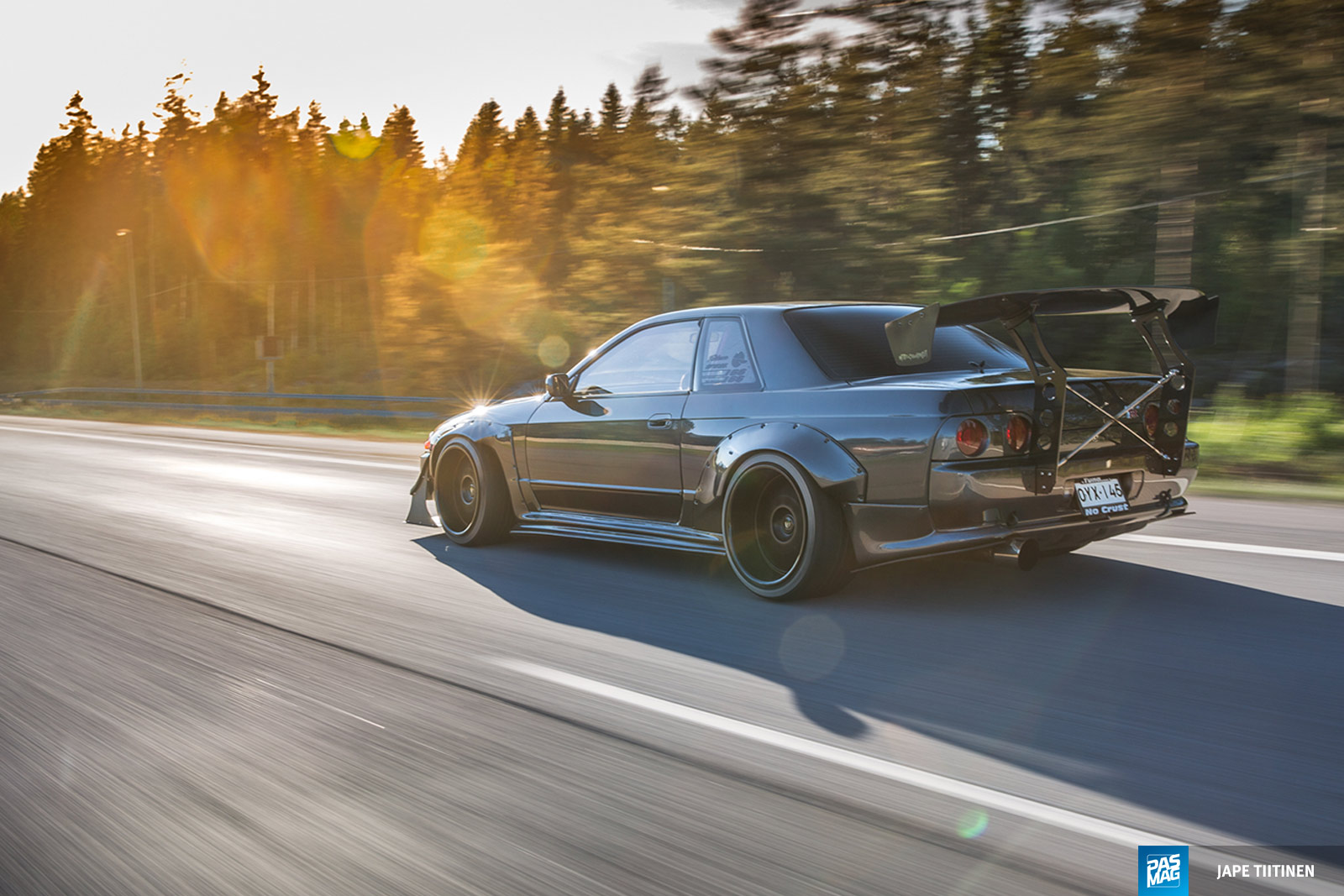 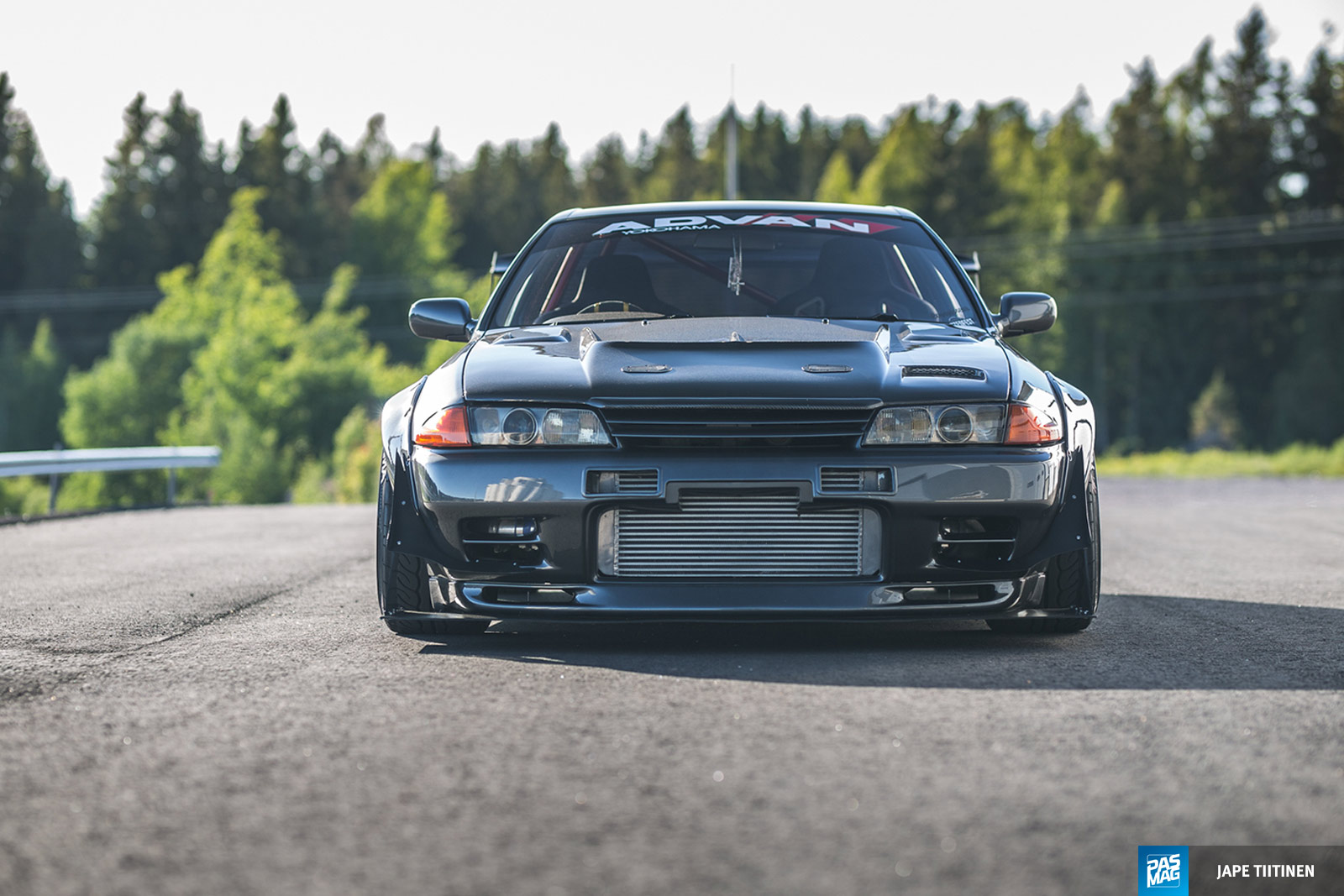 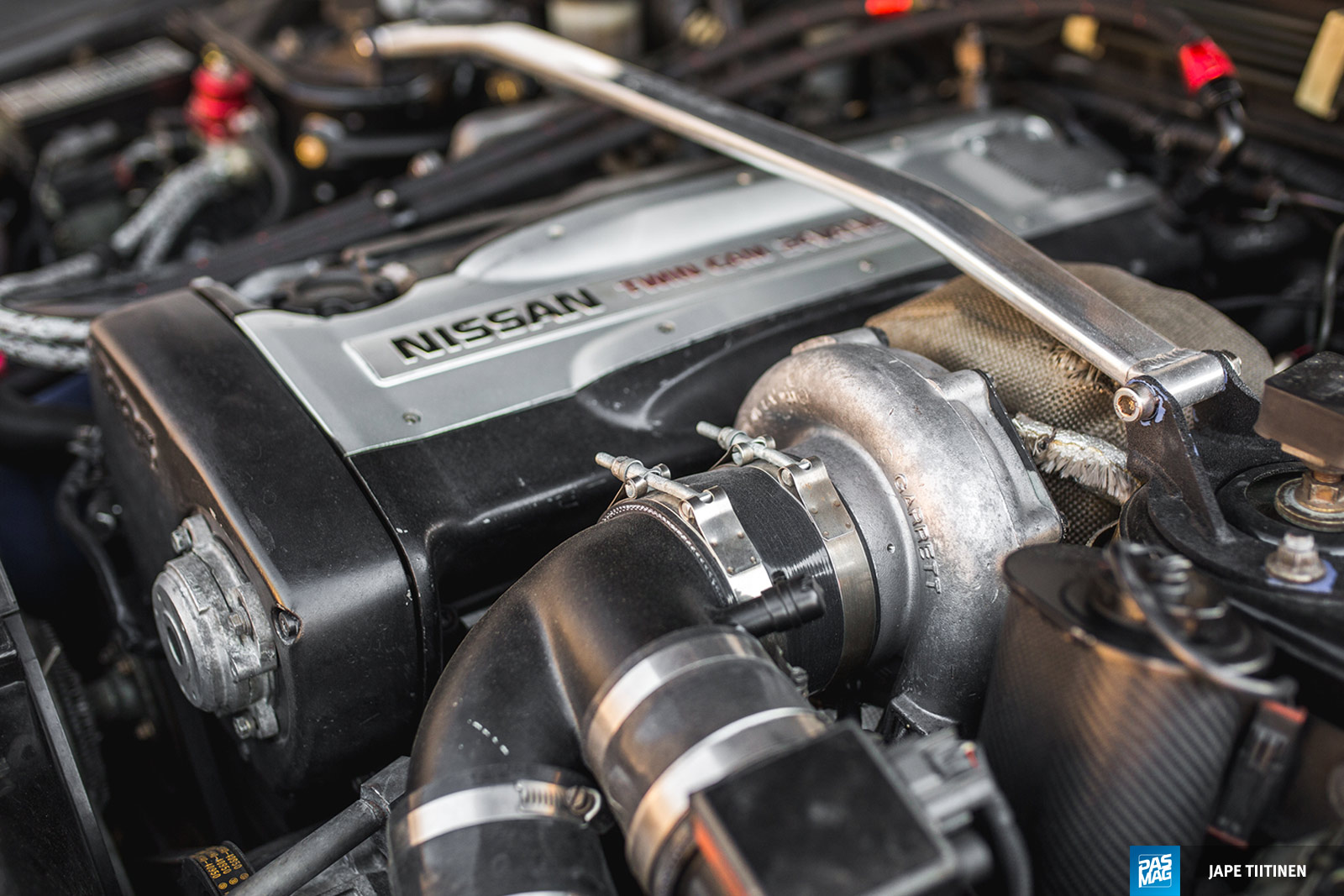 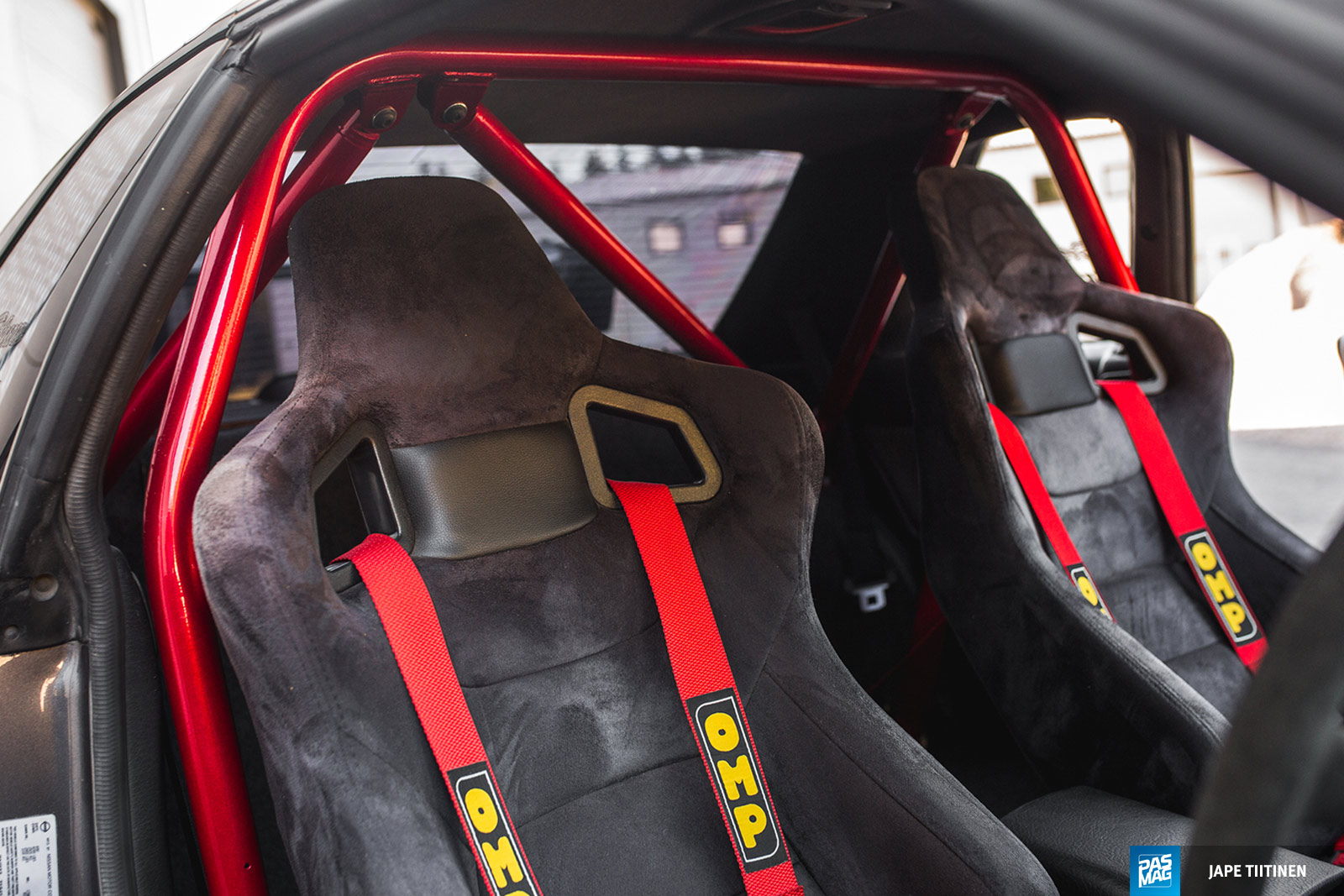 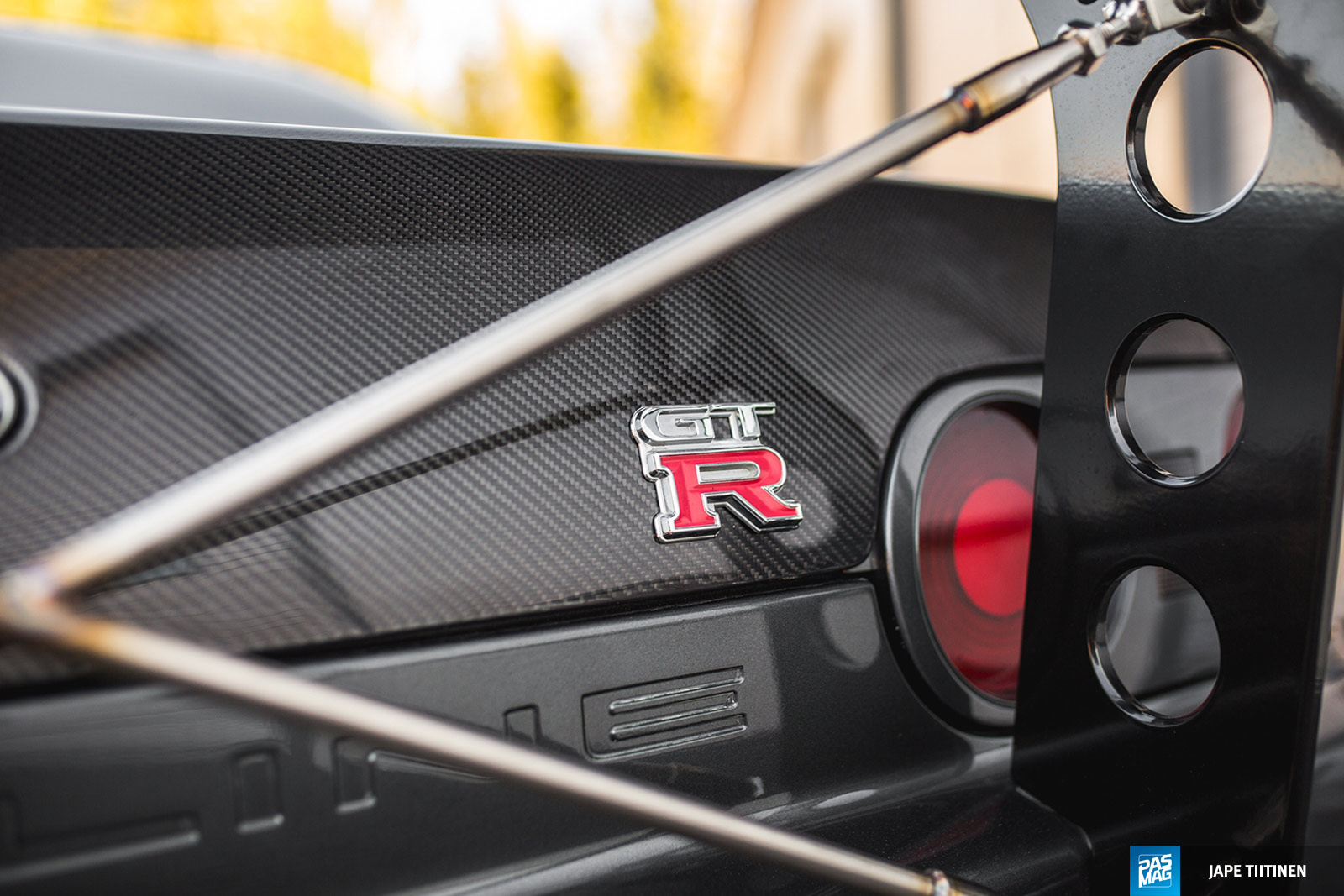 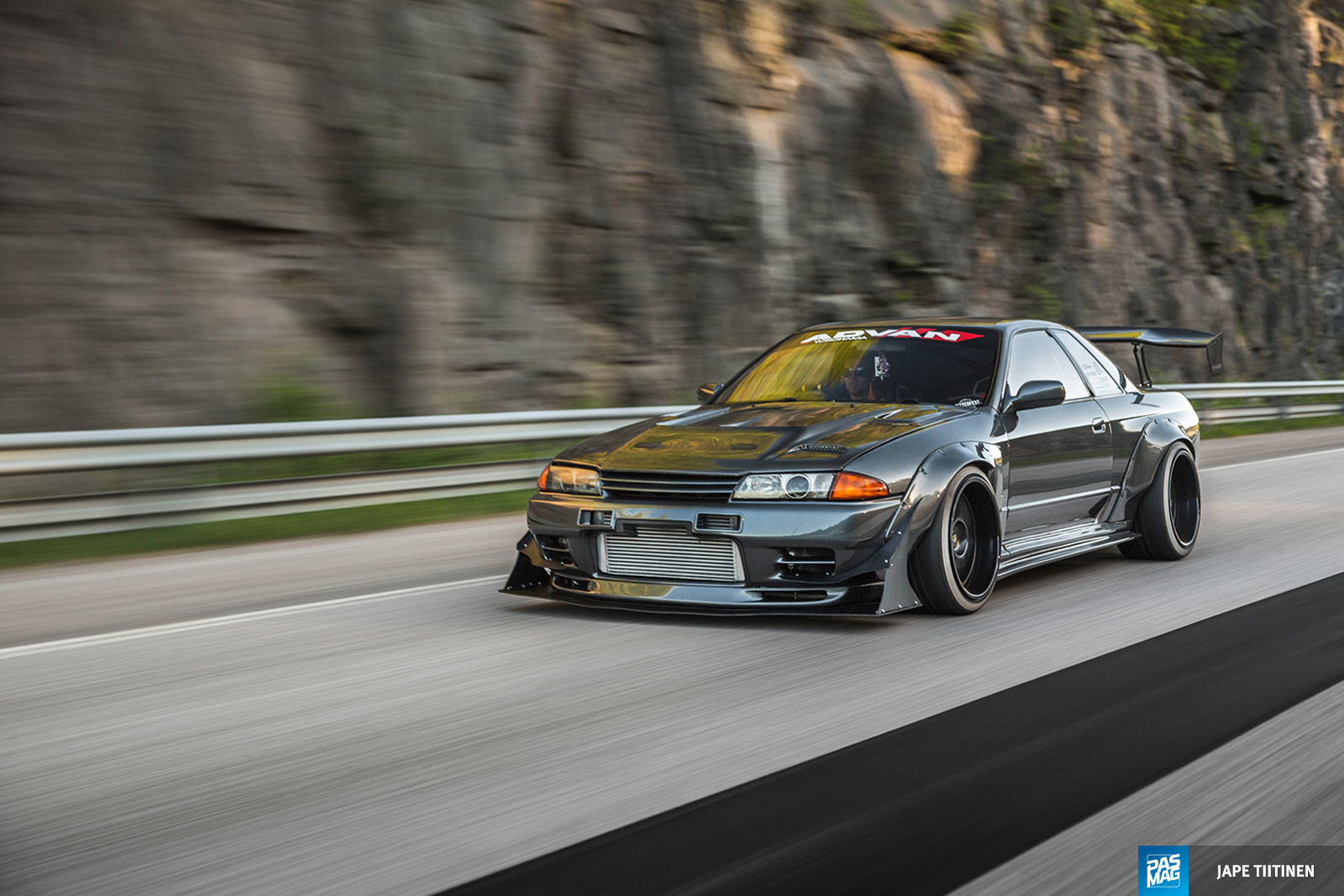 Dean Quach DIY Tire Removal is Hard to Watch
I was completely mesmerized when I saw this video of Dean Quach from Houston, Texas, USA using ordinary tools from his toolbox to remove a stretched...