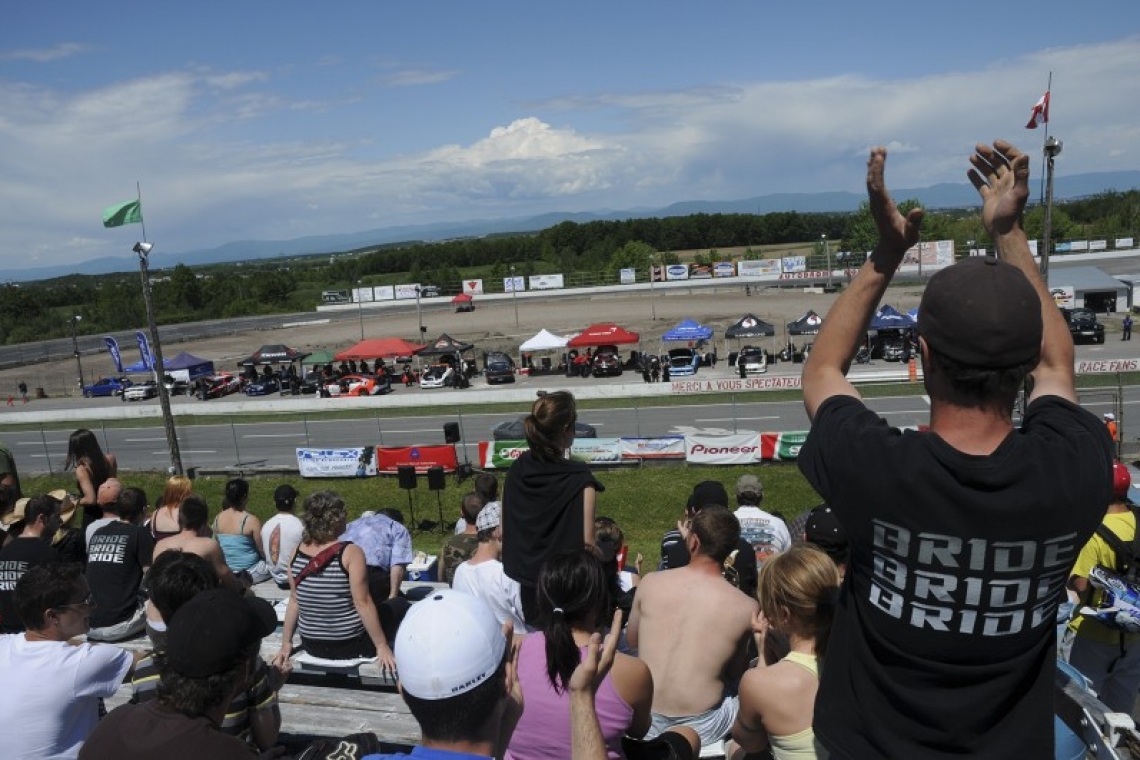 For the first round of the Castrol DMCC Eastern division, drift fans got their money’s worth at the Autodrome Montmagny just outside historic Quebec City. Good thing the downpour of rain of last year got replaced by some steamy hot weather. On top of that, a lot of drift junkies showed up – those QC fans will be there even if it there is a hurricane. The hottest drifters from Canada and the US but there was also many modded cars,  DMCC umbrella girls and naturally contests and freebies. On paper, the eastern division is way ahead compared to the western drivers in terms of talent, which meant that the action would be guaranteed and the record crowd of 4,700 would agree.

After some hard fought battles it was on to the Top 4 action.  Two-time defending champ Fred Girard in the Skyline faced Matt Waldin in the first duel. Waldin took it away after a OMT and sent the champ packing. The other battle was between Pat Cyr’s Corolla AE86 against Tania Bourbonnais GTO monster and but the Ontario driver won that tandem where displacement was clearly not a factor. In fourth position, Fred Girard proved that he’s still a contender to the title for 2009. Bourbonnais showed that she practiced a lot during the off-season and is always a threat. For Waldin, he bowed out in grand style by grenad’ing his engine on the track and losing control of his car to finally end up in the security wall during the finals to gift wrap Cyr the win. Although Cyr would have probably preferred to win his first DMCC event the hard way but there will be plenty of opportunity for that in 2009 DMCC action. 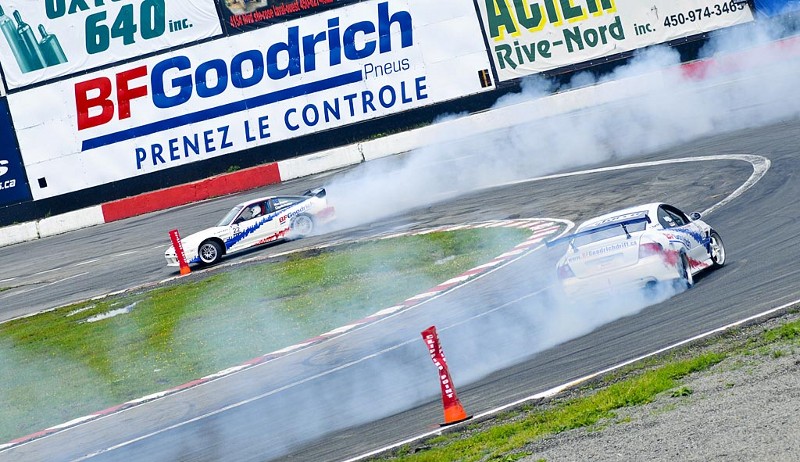 Finally, the bad weather did not ruin the second round of the Castrol DMCC Drift Championship as it had in the past. The practice day left the track damp, but the competition day cleared up to a sun filled sky. To top it off, this event in the region of Montreal was also the occasion for the drifters of the Pro-Am series to compete for the first time this summer. Let’s not forget that these drivers are tomorrow’s champions in and should be watched carefully even though they have a little less budget than the pros.

There were some memorable moments of the day and without a doubt one was the rematch between Pat Cyr and Matt Waldin. Both showed off high speed tandem with lots of smoke staying inches apart. Once again, Pat Cyr was able to fight for first place. Marc Landreville was probably having the best day of his life after winning against Marc-André Duquette. The amateur drifter from the day before found himself going for gold against points leader Cyr. Waldin was too strong for Marc-André Duquette, was able to cement the third spot on the podium. Finally, after changing to other used tires as a last resport, Marc Landreville stirred surprise by giving Pat Cyr a run for his money during two “One More Times” Unfortunately for Marc, during the second “One More Time” his Nissan 180SX crashed heavily into the wall in turn 1 to give him 2nd place. In the end, Pat Cyr took a big step ahead of the rest of his competitors by sealing another win.

Battle at the Border 2019: Season Opener at The Ramp
Photography by Pablo Colon (@fireblazinmedia) After having to postpone the show due to a thunderstorm and all-day rain in the forecast, car...